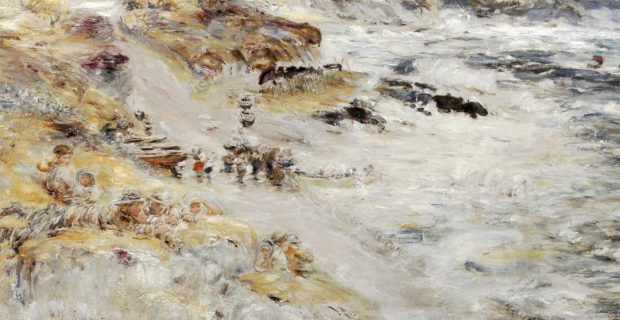 10 Exhibitions Not To Miss This May

A selection of 10 exhibitions taking place in the UK in May 2017, including the London Original Print Fair and major shows on Canaletto and Hokusai.

‘What is this Place?’ is an exhibition of paintings by Corinna Spencer, Gordon Dalton, Freya Douglas-Morris, Ben Sanderson and several others. It’s hard to say what these paintings have in common, but I’ll have a go anyway. Very few of them use perspective or lighting to create the illusion of depth or distance, but there is much joyful use of colour, and a focus on the fluidity of paint, as opposed to its sculptural qualities; these artists are pushing it about, rather than piling it on. There is a lot of deliberate mark-making, some of which reminds me (and I mean this in the best sense) that a brush is not magic wand or a device for the incarnation of a painter’s intentions but a bunch of hairs tied to a twig. 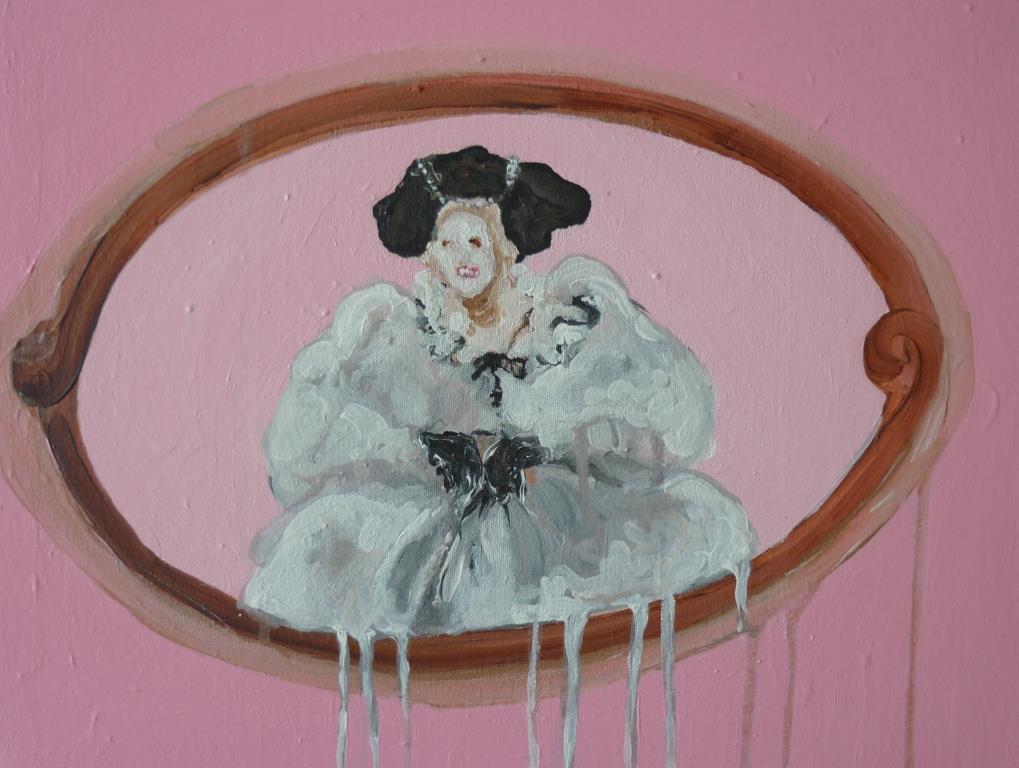 2) Canaletto and the Art of Venice

Was Canaletto a noble landscape artist or a lowly view-painter? Even his supporters would admit that his teeming, turbulent views of Venice are best viewed from a few steps back. Up close, they are rather sketchy: waves are denoted by flicks of translucent white paint, feathers are flicks of opaque white, and most of the people are faceless, because they have turned away en masse to look at the view. Is this skillful economy or corner-cutting? You’ll never get a better chance to decide for yourself.

3) Hokusai: Beyond the Great Wave

This exhibition of works by Katsushika Hokusai (1760 – 1849) focuses on the last thirty years of the artist’s life, leading up to his death at the age of ninety. In the artist’s opinion, he got better with age: ‘From the age of six, I had a passion for copying the form of things and since the age of fifty I have published many drawings, yet of all I drew by my seventieth year there is nothing worth taking in to account. At seventy-three years I partly understood the structure of animals, birds, insects and fishes, and the life of grasses and plants. And so, at eighty-six I shall progress further; at ninety I shall even further penetrate their secret meaning, and by one hundred I shall perhaps truly have reached the level of the marvellous and divine.’ Interesting marketing from the British Museum, who have opted to cover the promotional matter for ‘Hokusai: Beyond the Great Wave’ in images of, er, ‘The Great Wave’. 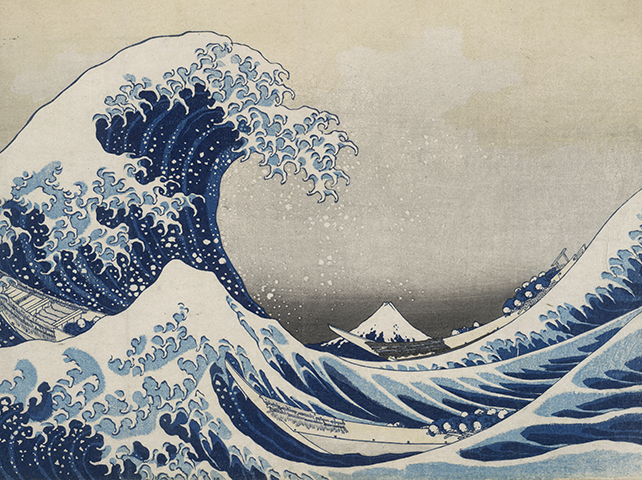 This new show at Jealous North, Crouch End, will cover the walls of the gallery in limited edition screenprints of everyday, endangered and extinct ‘Birds, Bugs & Beasts.’ 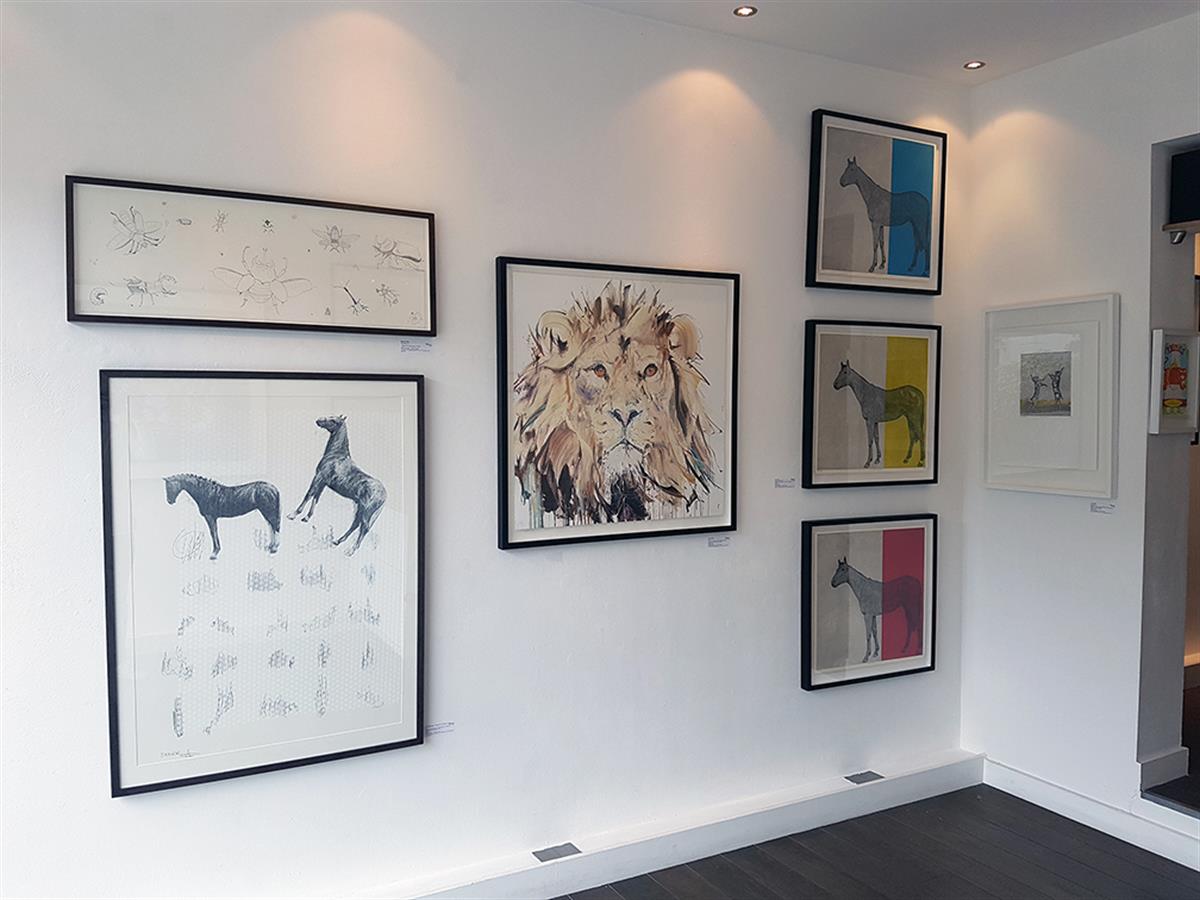 LOPF is a truly impressive occasion, a sprawling mart which fills the first floor of the RA, catering to all tastes (if not all budgets). Here you can buy anything from a Sixteenth-century formschneider woodcut to a contemporary screenprint. This year there are a lot of prints by Edward Calvert and Samuel Palmer and later artists, such as Graham Sutherland or Robin Tanner, whose work was heavily influenced by them. There’s also a fair amount of Wadsworth, Ravilious, Bawden and Nash. Stands of particular interest include the Royal Society of Painter-Printmakers (25), and the British print dealers Eames Fine Art (24) and Elizabeth Harvey-Lee (48). 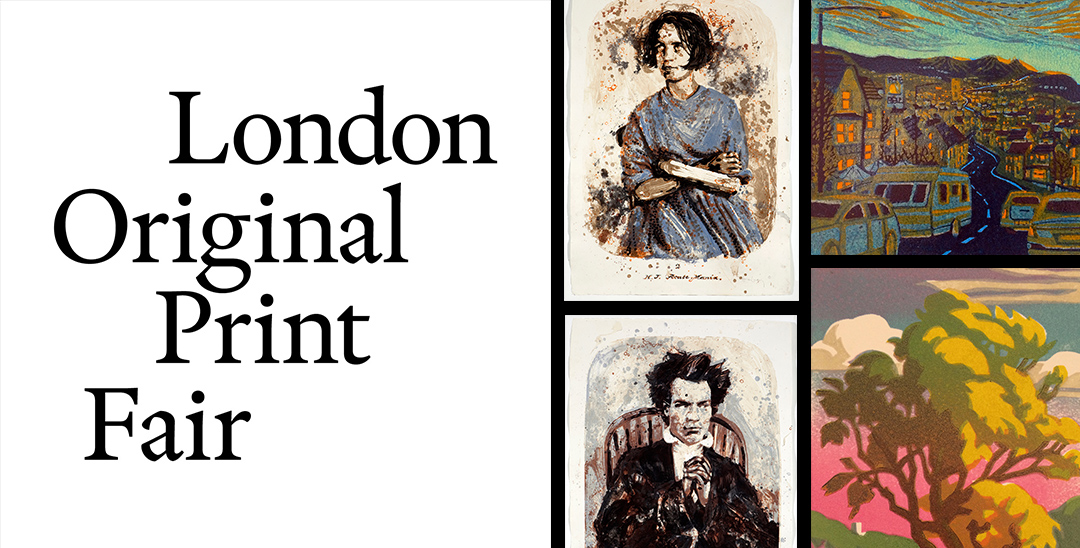 6) Painting the Theatre: Garrick in Action

‘Painting the Theatre’ celebrates the recent acquisition by the Bowes Museum of two paintings by Johann Zoffany (1733 – 1810) depicting the celebrated actor and dramaturge David Garrick in character; ‘David Garrick and Mrs Cibber as Jaffier and Belvidera in “Venice Preserv’d” and ‘David Garrick and Mary Bradshaw in David Garrick’s “The Farmer’s Return”‘. The exhibition will use contemporary paintings, prints and ephemera (as well as theatrical paraphernalia) to investigate Garrick’s impact on the theatre of Enlightenment Europe, and to demonstrate his considerable celebrity in Georgian Britain.

7) The Walk to the Paradise Garden: Paintings by Dan Hays

The work of the artist Dan Hays investigates the relationship between the painted image and the digital image, often using myriad pointillist dots or strokes to mimic the effects of pixellation. For this exhibition, Hays has concentrated on Letchworth’s status as the first of the post-war garden cities.

Showing at Broadway Letchworth from 4 March to 11 June 2017. 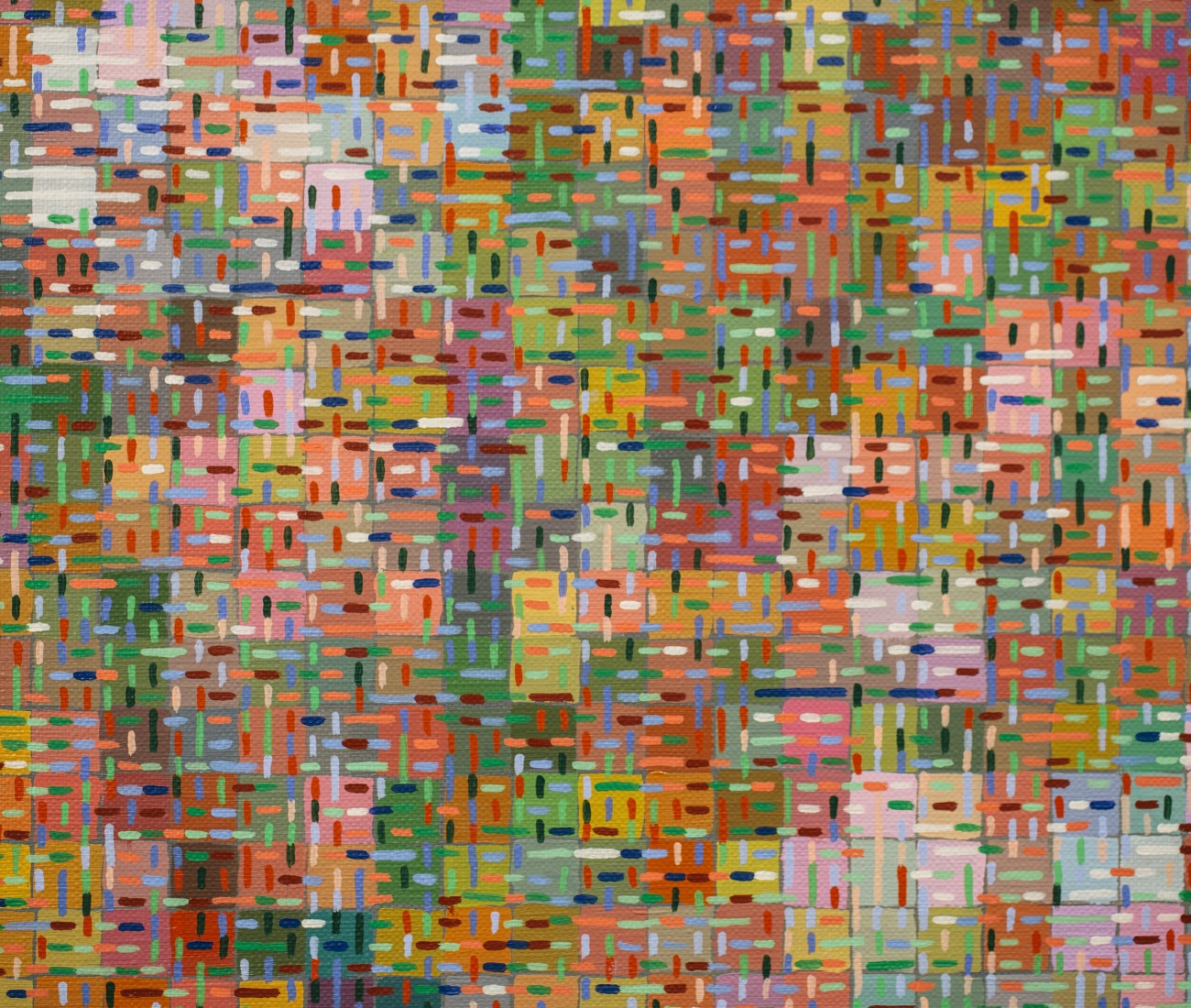 This exhibition traces the career of the painter Gillian Ayres, one of Britain’s foremost abstract artists and a key link between the British and American art of the mid-century. Composed of a selection of paintings from Ayres’ own collection and a series of paintings from public collections in the UK, this is the largest exhibition of Ayres’ work ever to be seen in the UK.

Showing at the National Museum, Cardiff, from 8 April to 3 September 2017. 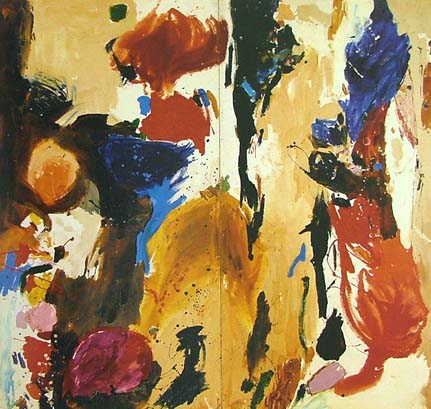 This exhibition brings together two thrilling 19th century landscape paintings: William McTaggart’s ‘The Storm’ (1890) and John Constable’s ‘Salisbury Cathedral from the Meadows’ (1831). The Constable was secured for the British public by the Tate in 2013 and is now doing the rounds of five UK museums and galleries (NM Wales, Colchester & Ipswich Museums Service, The Salisbury Museum, Tate Britain and the NGS).

Showing at the Scottish National Gallery from now until 25 March 2018. 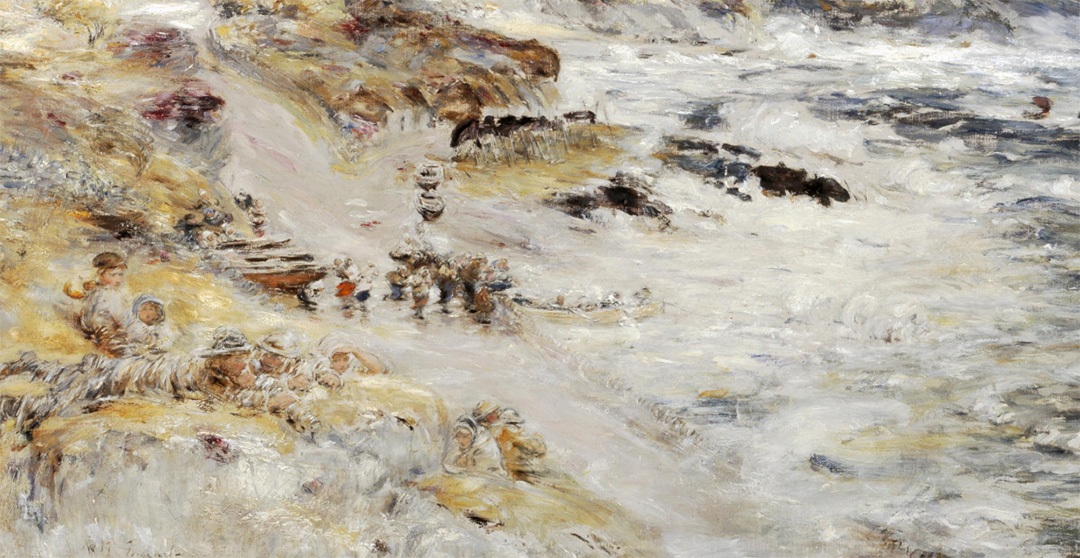 A detail from William McTaggart, The Storm (1890).

Eric Gill: The Body is not an easy exhibition, but it is a necessary one. It features over 80 works from public and private collections across the country, including several drawings and a major piece of sculpture which have never been put before the public. The aim is to ask whether we can still find beauty in Gill’s works despite our knowledge of the artist’s sexual abuse of his daughters.

Showing at Ditchling Museum of Art + Craft from 29 April to 3 September 2017. 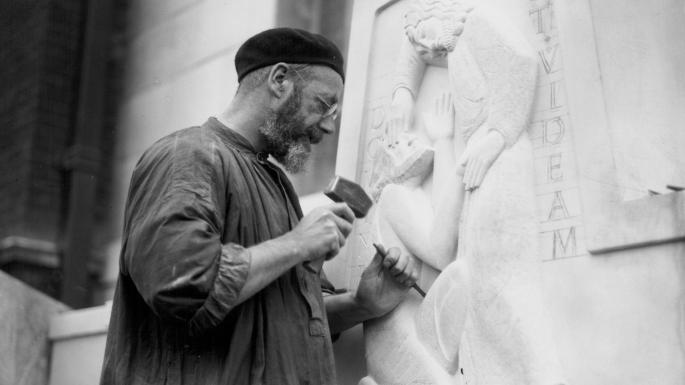 The image at the top of this article is a detail from William McTaggart, The Storm (1890), which is currently on show at the Scottish National Gallery.