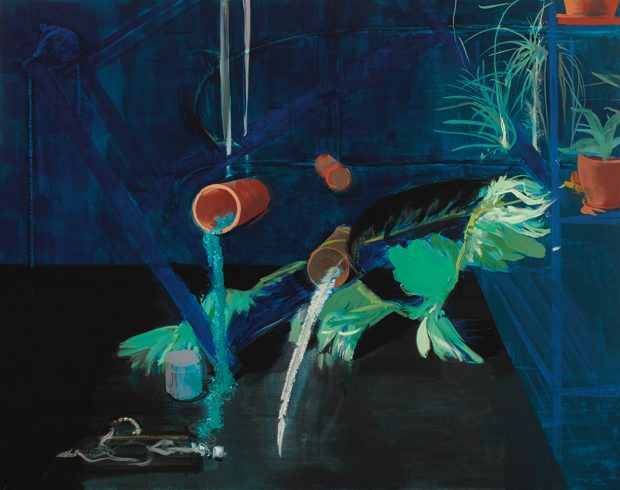 Current Events #47. A selection of UK art exhibitions and events for week 47 of 2017.
(click images for larger view) 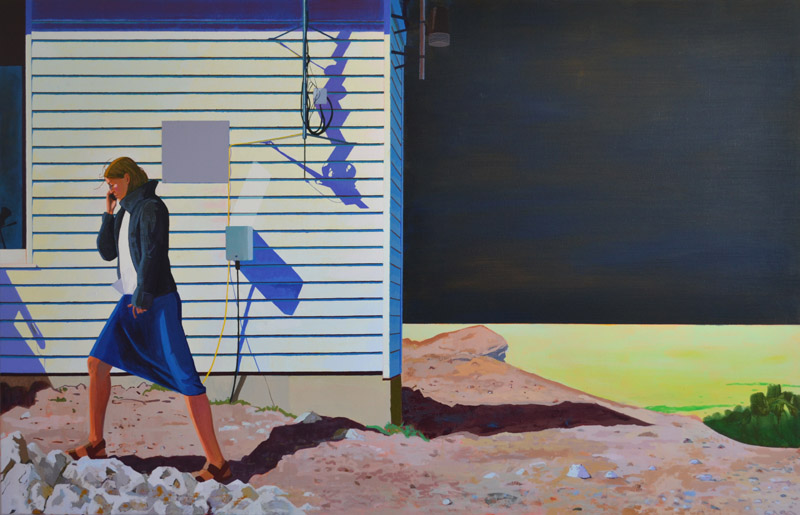 The 83rd London Group Open shows work from artists selected from open call alongside the work of members from the artists’ collective, The London Group. The exhibition will feature works in a wide range of mediums, including painting, sculpture, drawing, print, photography, digital, mixed media, installation, video and an audio artwork. The second part of the exhibition runs from 22nd November to 1st December with half of the selected artists showing. 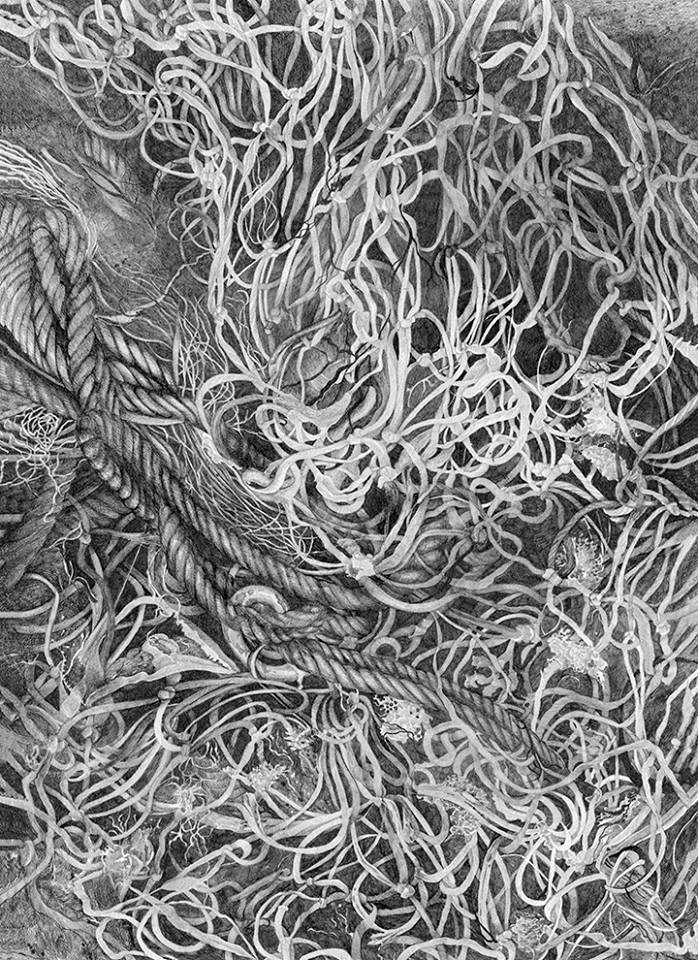 Rope 3 by Sally Cole is being exhibited at Imagine Falmouth

‘Imagine Falmouth’ is a biennial open exhibition and art prize.

The Winner of the artist’s prize was Angie Munro and Winners of the under 18s prize were Lucinda and Rosie Van Vestraut. 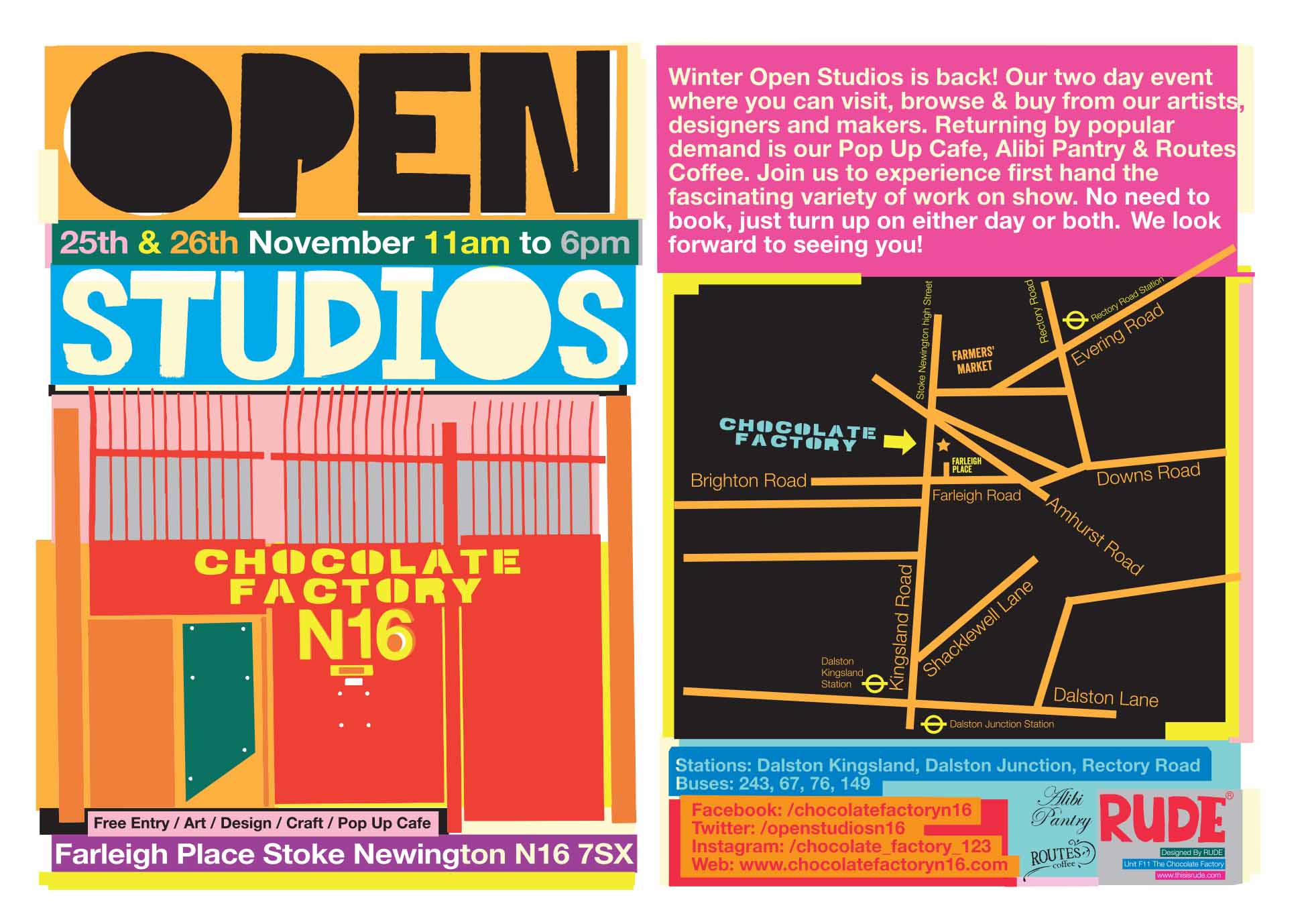 Chocolate Factory’s Winter Open Studios is an opportunity to meet the wonderful collection of crafts people, artists and designers who work there, as well as seeing their emerging work in situ as it is being created and having the opportunity to buy straight from the studio.

The Chocolate Factory N16 is part renovated, part purpose built: it is a collection of 27 studios, filled by a thriving community of artists and designer makers. Each individual studio has a life and character of its own. 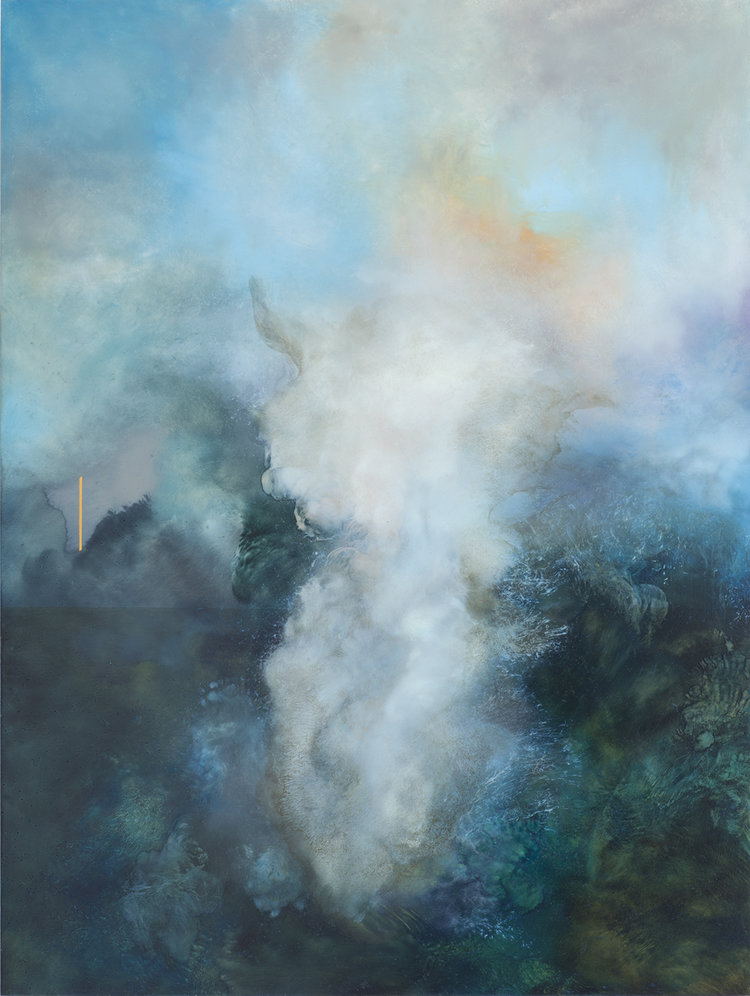 Morris explores the synergy that exists between the substance of oil paint and viral behaviour. She works in multiple layers of glaze using high resin oil colour to demonstrate its ability to modify and spread unpredictably.

During her project the Viral Sublime Morris went into laboratories and instigated collaborations with scientists.

‘These partnerships have a profound effect on her imagination and the decisions she makes in painting. The development of her painting and use of paint draws deeply on the imaginative processing resulting from a lifetime of medical treatment in suppressing Keratitis. The scientific and medical language that have become familiar to her in subduing this virus, notably words such as staining, scarring, opacity, blurring, spreading and trace, seep into her practice. The paintings of The Viral Sublime are in part, projections of her imaginary perception of the interior landscape of the body: cerebral images of abstract thoughts on parts of the body that remain unseen to the naked eye. Vertical lines function as ‘biomarkers,’ which reference the measurable indicators in the body and pay homage to the strengths and vulnerabilities of the human spirit.

Morris, co-founder of the da Vinci Artists Residency and former Art Director in Film, recently completed a practice based professional doctorate in Fine Art at UEL, supported by da Vinci Artists Brushes and Schmincke Paint. In 2012 Morris was offered a scholarship to Kingston and later received an MA in Painting from the City & Guilds of London Art School. Her work has been exhibited widely in the UK and Germany, and features as part of collections globally.’ 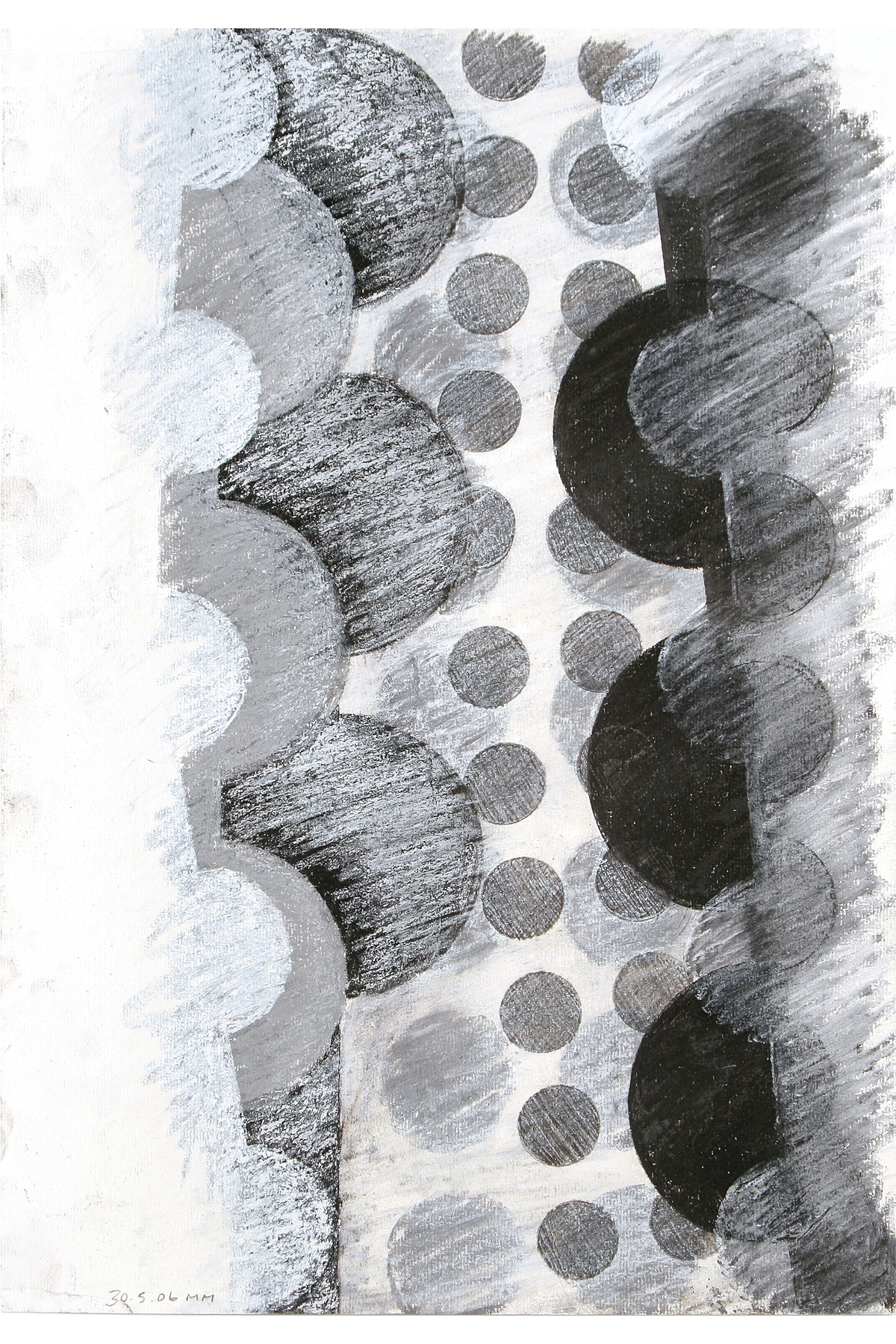 A new series of abstract, geometric constructions and paintings from the Artistic Director of Creative Arts Hub.

Mark Milnes’s work is abstract and geometric, and is formed by repetitions of similar or identical shapes, arranged in rhythmical sequences. 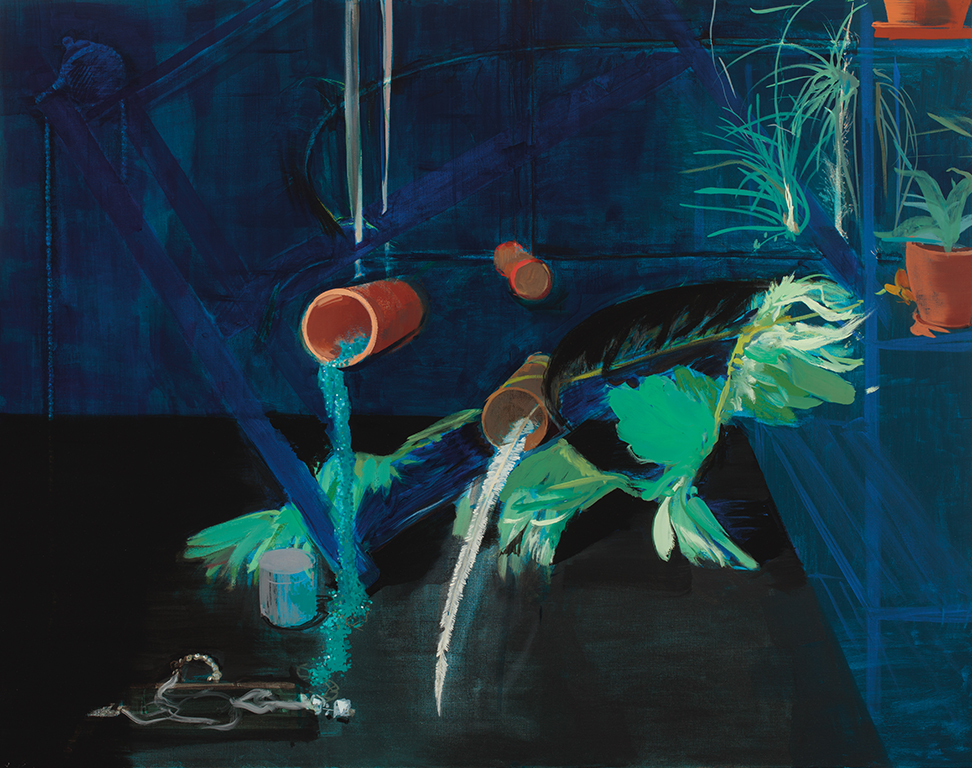 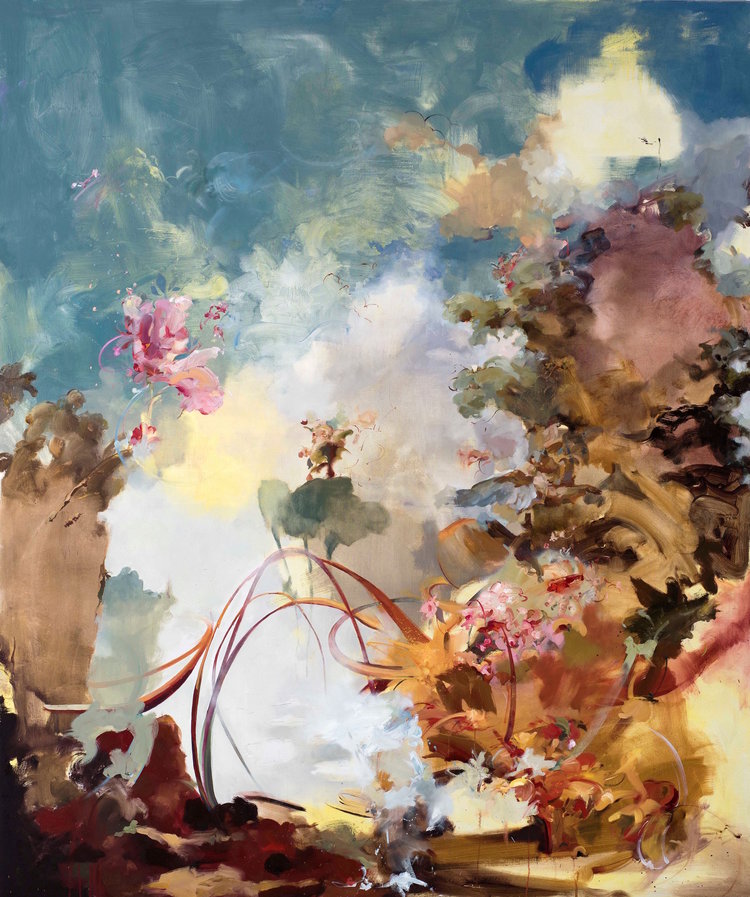 Yukhnovich in her paintings uses the expression of art historical aesthetic to review contemporary visual culture. In her recent work, she analyses the idea of the feminine through looking at rococo: the rococo as representative of the superficial and frivolous, and femininity as supposedly passive, submissive and decorative. 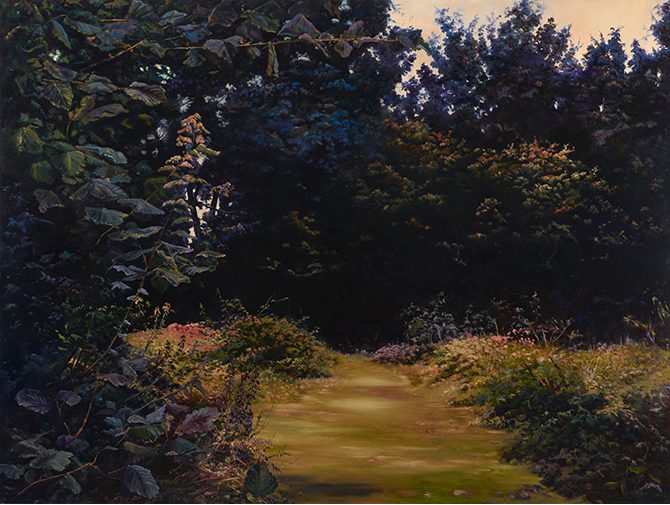 Outside In: Judith Symons, Wuon-Gean Ho and Constance Johnson 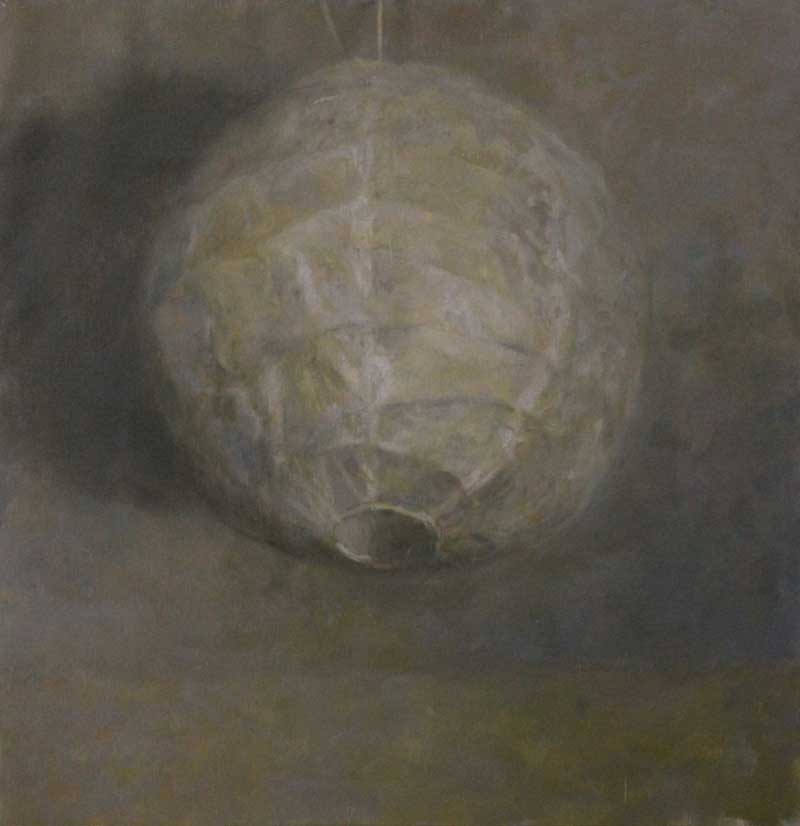 A selection of drawings and works on paper by Tim Patrick. 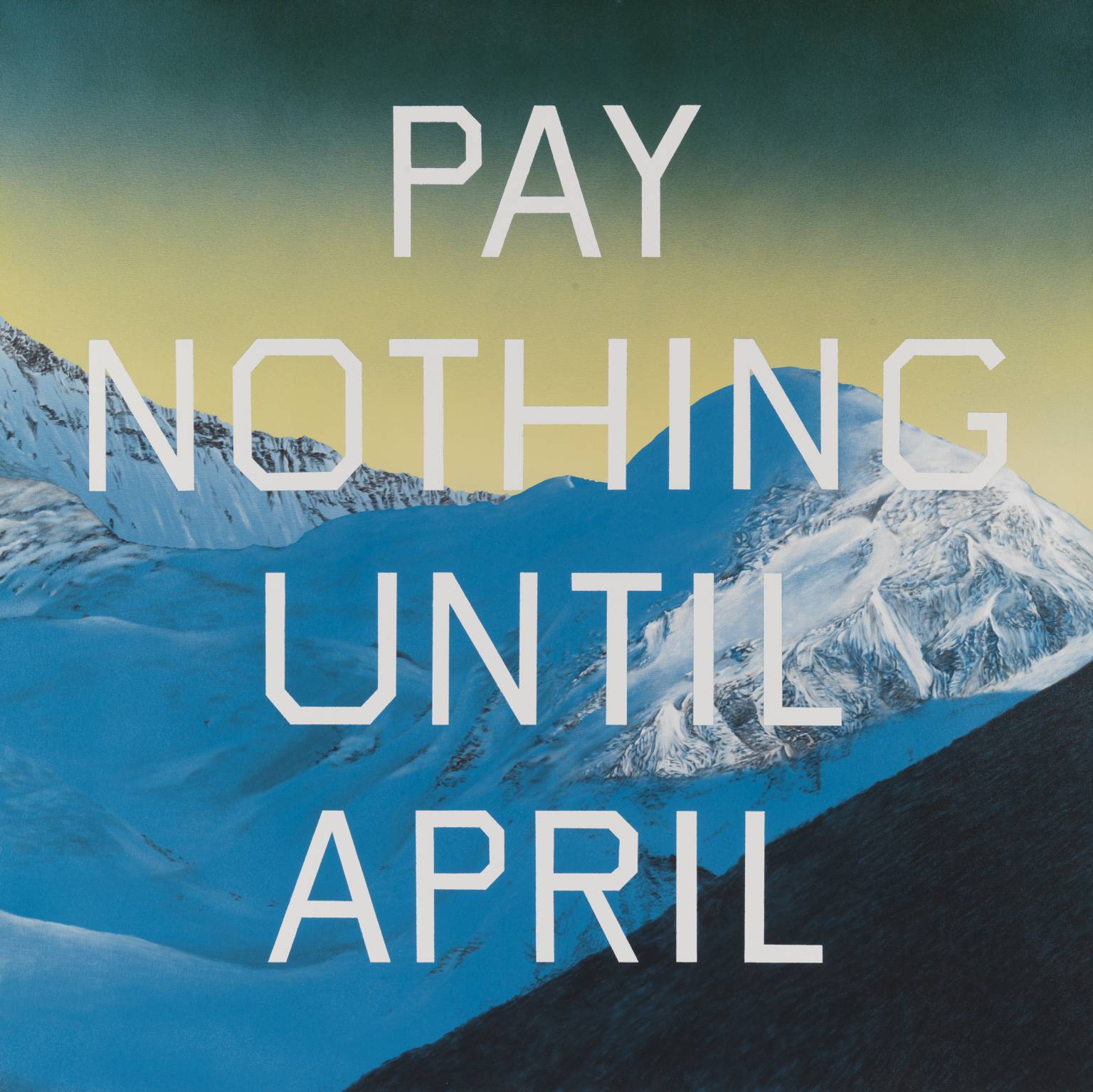 Edward Ruscha, Pay Nothing Until April, 2003, acrylic on canvas
60 x 60 inches, ARTIST ROOMS Acquired jointly with the National Galleries of Scotland through The d’Offay Donation with assistance from the National Heritage Memorial Fund and the Art Fund 2008.© Ed Ruscha

A two-room display of Ed Ruscha’s work exploring his fascination with West American Culuture, held in the Artist Rooms of the Scottish National Gallery.

Included works will range from photographic series, paintings and drawings dating from the early 1960s to the 2000s. Thematically this demonstrates Ruscha’s interest in urban landscape and architecture, cinema, brands, automobile-culture and language that refers and relates to the aspirations and seduction of the American Dream. 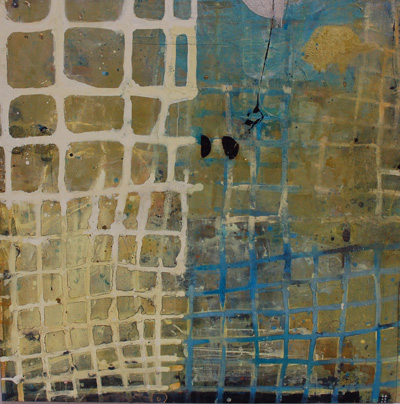 The work of Liz Douglas is about landscape with an emphasis on particular places. She uses drawing to collect information from a wide variety of sources when researching sites which interest her. She is trying to find a way of incorporating drawing into painting. What is drawing and what is painting – are they the same? This is a constant theme in her work.

Contemporary practices in both drawing and painting, in relation to traditional methods, are a constant challenge in order to find innovative ways of making work that challenges her perception of landscape. She paints often on a large scale, layering paint to create surface texture, colour and structure.

A Sense of Place: Heather Duncan 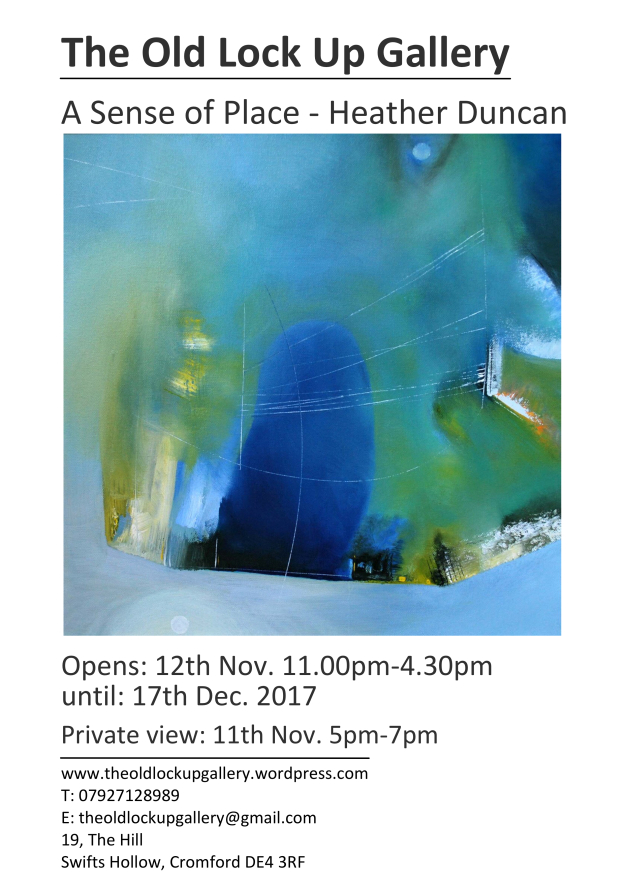 Heather Duncan: A Sense of Place

‘Dynamic landscapes constructed out of blocks of colour, textures of paint and numerous gestures, accents and modulations; these are the means by which Heather Duncan expresses a highly personal view of her environment. Places take on a remarkable importance, in particular the rugged northern landscape of vast Pennine moorland, striking fells and crags, monumental castles, and expansive coastlines.’ -Martin Goold 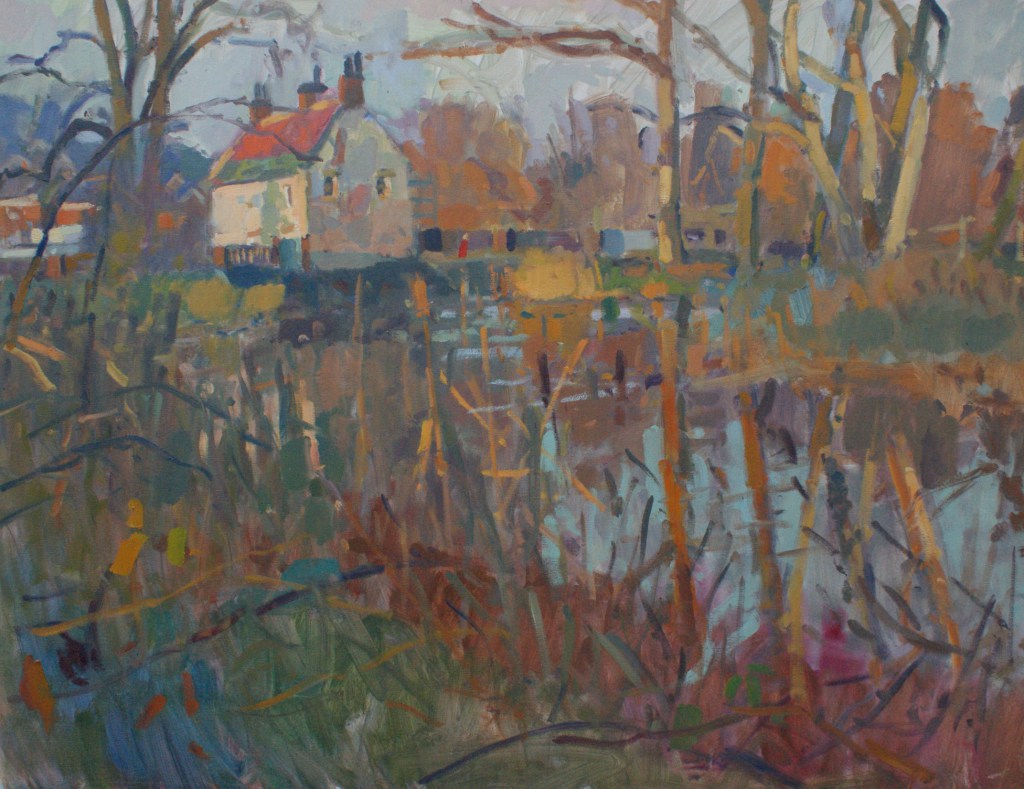 A selection of original oil paintings, drawings and sculptures, made from observation, on the theme of home by Andrew Farmer. The works range from plein air scenes of the local surroundings to indoor scenes of intimate, family life.

Andrew based in Sprotbrough and spent his childhood in the Doncaster before moving to study in Canterbury Kent. Andrew studied a degree in Fine Art, specialising in painting. Since then, Andrew has also attended the Royal Drawing School in London where he received the Richard Ford Award for drawing.

Andrew has also exhibited with the Royal Society of Marine Artists, the New English Art Club and the Royal Institute Of Oil Painters all hosted at the Mall Galleries close to Trafalgar Square. Andrew received the Windsor and Newton award at the ROI in 2015. 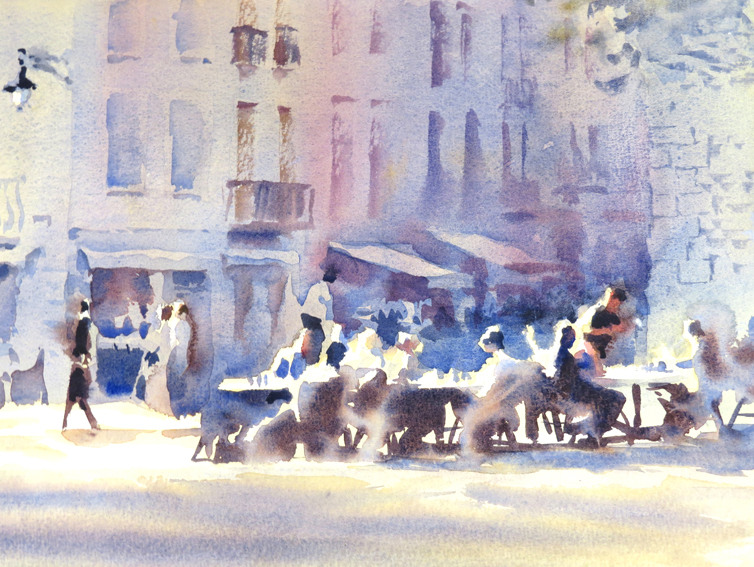 Hazel Soan, a British artist who works out of studios in London and Cape Town, paints in watercolour and oil and is known for direct wet-into-wet watercolour approach. Her work focuses on strong contrasts of light and shade as well as shape, interval and tone.

Her work is in collections at the National Portrait Gallery, the Lister Institute, the Chelsea and Westminster Hospital, the Ritz, other London and International Hotels, the British Embassy in Ankara and the EU Delegation in Windhoek. She has participated in mixed exhibitions including ones with the Royal Academy, the Barbican Centre, the Midland Open, Mall Galleries and the David Shepherd Wildlife Foundation. 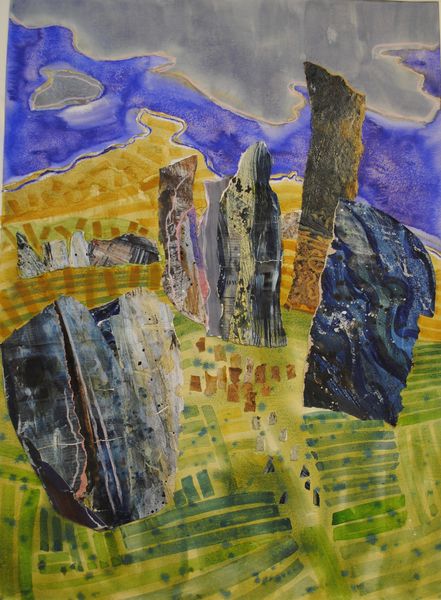 The Meffan Winter Exhibition, features a variety of artwork from amateur and professional artists based in Scotland.
Works range from impasto landscapes where the textures of the Scottish countryside are captured in undulations of paint, to poetic delicate pieces carefully constructed in thread and fine paper, as well as brightly coloured and enthralling oils on canvas and screen prints. 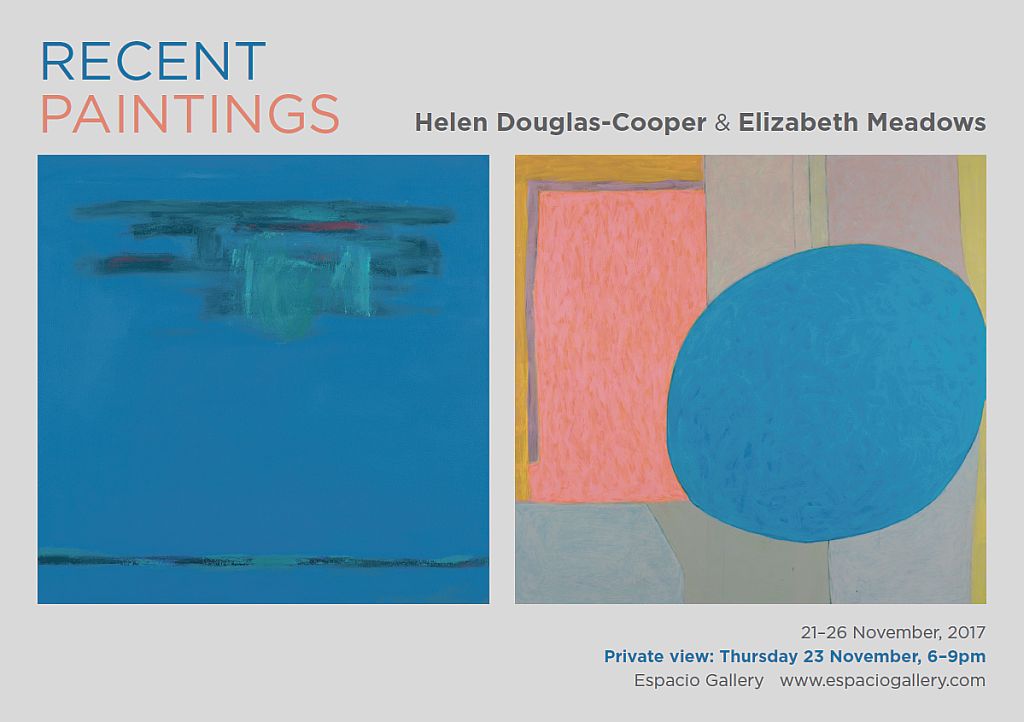 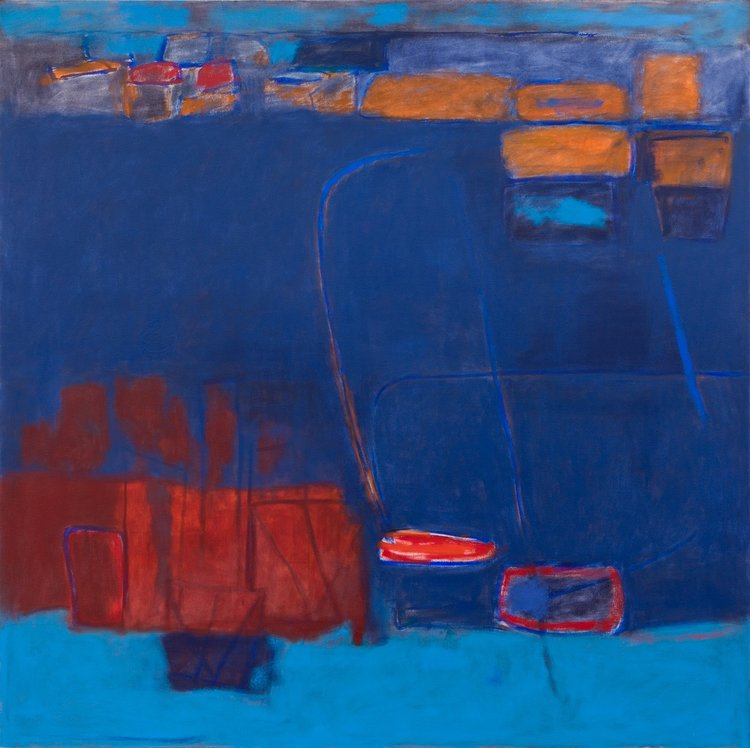 A joint show of non-figurative work by Elizabeth Meadows and Helen Douglas-Cooper, both of whom explore the possibilities of pictorial space, colour and mark-making as well as the process of layering works, either in practice or by the simultaneity of their making.

Elizabeth Meadows interprets the relationship between one space and the next: the layered acrylic paintings focus on repetition and concentrated forms such as the bar, the curve, the stripe to invoke or resonate a sound which is either muffled or sharp depending on the colour.

Helen Douglas-Cooper explores in her work the space or tension between the actual, physical paint surface of materials and marks and the virtual space of the image. She develops paintings by adding and removing elements in alternating layers of saturated and muted colours until thee image reaches a point when everything holds together in a dynamic balance. An underlying geometry, experimentation with process, and the materiality of the paint surface are recurring themes; colour is an animating force.

The image at the top is:
It has been falling for a long time, 2017, oil on linen, 115cm x 146cm, by Laura Smith, who is showing at Control to Collapse at the Blyth Gallery.