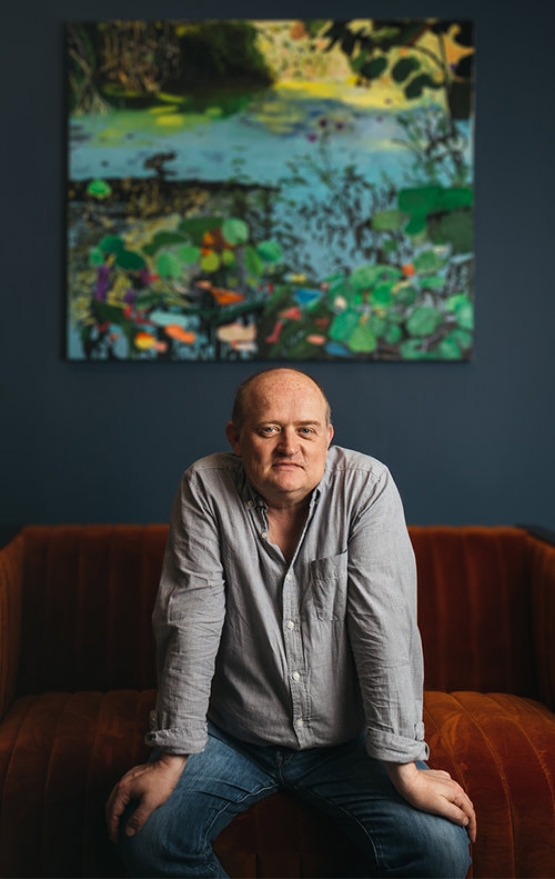 “When it comes to the landscape, I like having a subject, but I like to be able to use my imagination in the painting. The painting is just as important as the subject. The things that attract me are shadows, shapes and colours, rather than the need to capture the emotion of something.”

“There is a quote by Nuno Oliveira, ‘The horse is the best judge of a good rider, not the spectator. If the horse has a high opinion of the rider, he will let himself be guided, if not, he will resist.’

My aim was to produce a picture that showed a horse who has judged his rider and found him worthy of following. It’s a true partnership then; a relationship completely in harmony; two species in sync; speaking a language that both understand and respect. The horse willing to give whatever is asked and the rider wise enough and respectful enough to not ask too much.

The horse in the picture is ‘Karioko’. He belonged to the late Miguel Tovar who won many competitions with his Spanish horses. (This picture was drawn with kind permission from a photograph by Diego López Rodríguez).”

“Caravan I engages with the London housing-crisis, rising rents and alternative living. This painting takes an autobiographical viewpoint on broader socio-political subject. Having lived in Art Studios, basements, derelict buildings and now a caravan in Central London, I have combined memories, architectural designs and personal photographic reference in the painting. Spaces are constructed and distorted in order to covey the reality of domestic spaces; objects in various states of solidity suggest a transience to the existence.”

“The theme of the extinction of fauna is the axis of my artwork since 2015. I look for species at risk of extinction, and portrait them, as a testimony of their passage and imminent disappearance. To humanize them is my way to pose a mirror game of our own extinction.”

“This painting reconsiders the multiple layers of London through a dream-like, atemporal filter, so as to redefine the notion of the city, both individual and collective, by what it can inspire.”

“This portrait was conceived very spontaneously one evening, while I was coming back with my family from a trip to the Cinema in North London. I was suddenly fascinated by the beautiful intricate patterns of the ceramic tiles in the background and by its brightness, which highly contrasted with the outfit of both the figures, at the same time as exalting them. I also really loved the expression of both father and daughter. This very temporary moment was caught while waiting for a train to arrive at Walthamstow Central station, hence the title.”

“This painting draws inspiration from the classic Greek tale of Odysseus and his men’s plight at the hands of Circe. It re-imagines the story within a contemporary setting and whilst it retains the essence and integrity of the myth. It also stands alone as a modern day cautionary tale.”

“The patterns of natural subject matter, forced into close proximity.”

“My paintings have to do with sensation. Sensation arrived at through improvisation that plays and responds to the present moment.”