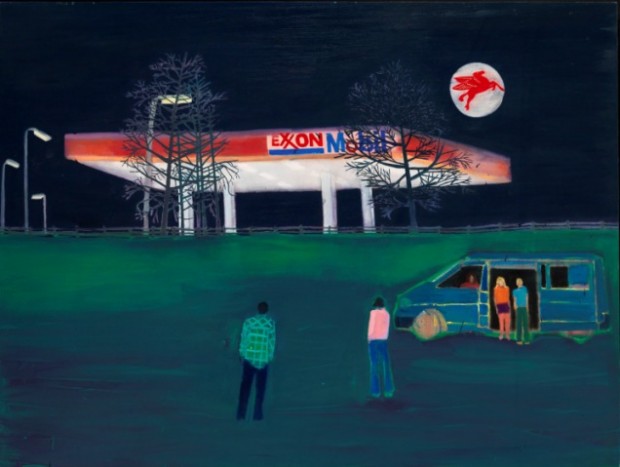 The Threadneedle Prize 2013: A closer look at Filling Station by Tom Hammick

Last night saw the opening of the Threadneedle Prize for Painting and Sculpture at the Mall Galleries in London. This esteemed prize for figurative and representation art is known to have one of the largest prize funds in the UK, with the main prize being a tasty £30,000.

The show is full of a wide array of different works, from a box containing blankets arranged in a union jack formation to traditional miniature portraiture, and with 115 works in the show it is impossible to give attention to all the works deserving of some column inches on the Jackson’s Blog! So here instead, I give you a post dedicated to each of my favourite works in the show.  I shall start by presenting ‘Filling Station’, by Tom Hammick. ‘Filling Station’ is a painting brooding with anticipation, the pause before action. It feels mysterious and haunting, and is reminiscent of the impending doom in a horror movie – there’s definitely something a little ‘Blair Witch’ about it. The colours are deployed in such a way as to appear warm and comforting, which juxtaposes wonderfully with this ominous subject matter – stationary, silent figures, stranded by the petrol station. Two of them could almost be in awe of the monument in the way they might be of Stonehenge. There is a delicacy to the way that the paint is handled – every branch of a tree is painted with intricacy and equal attention, and small areas of detail such as the checks on a man’s shirt and the fence in the distance lend a sensitivity and honesty to the work.  I asked Tom Hammick about his intriguing work.

Lisa: What is ‘Filling Station’ about?

Tom: It was inspired by a journey to the top of Norfolk. Driving at night, every gas station is lit up… very seductive as petrol stations are, like in a Lynchian movie, or Michael Mann’s Collateral, or Hansel and Gretel seeing the witch’s house all lit up in the forest. They are Oases  of light and colour in the dark.

So it is part road movie painting in one sense. But it’s not really that. Apple at the time had just topped the largest world company at the time, or the most profitable, and knocked Exxon Mobil off the top for a few months. I wanted to paint a picture about how tied in we are with these big multinationals and  to  a carbon economy, however we might want to live. And how as a sort of simple hill billy family one is trapped in this.(or happily part of it.) So in one sense the Mum and Dad in the  family are looking on in awe at the gas station like Dorothy in the Wizard of Oz looking on at the Wizard’s Palace. It’s perhaps looking on in wonder, or fear, at this seductive yet monstrous thing plonked down on the edge of a field in the middle of nowhere. It’s like a great big altar slap bang in the middle of the canvas. Perhaps they have run out of gas?

The petrol sign, like one in America is the old 50’s Pegasus that Mobil used in the 40’s…was inspired by the signs in North America you get high over the highway, telling you of what’s up ahead,  but I wanted to be also like…” Look! they are so rich they even own the moon”

There is a good history of petrol stations being depicted in the States, especially in movies, but also with artists like Hopper (see his Filling Station) and Ed Ruscha’s Standard Filling Station, and I wanted to paint a quintessentially  British version, where the lush landscape is as much part of the image. Sometimes part of the excitement for painting for me is finding subjects that aren’t painted much but are very much part of our lives. So it was exciting to paint a camper van…. like Ultz’ inspiring sets for Glyndebourne’s Macbeth or Butterworth’s Jerusalem.

Lisa: I love the use of colour in the painting, in particular the shocks of green that seem to illuminate the van and one of the figures. How did you achieve this effect?

Tom: Layers of good pigment, yellow underneath that glows through.

Lisa: Where do you find your  subject matter?

Tom: Films, newspaper stories, poems, novels, Si Fi short stories, drawings, things that happen to me and the family, theatre and opera and journeys made- even to the village shop!

Lisa: What brands of paint do you enjoy using, and are there any ‘essential colours’ in Tom Hammick’s paint box?

Tom: No essential colours, but I do go in phases. Blues I love. Also  have had real problems with green-which I am trying to redress. And reds are tough. Hot reds, cold reds. I love pinks and I suppose one has combinations which taste really delicious together. (Patrick Heron was so good at this. Brown and Pink together for example.) I use Sax paints, Michael Harding, Winsor and Newton, Old Holland, Jackson’s Artist’s. I am very specific about colours from different manufacturers.

Lisa: How important is the quality of your painting surface to you? What qualities do you look for in your canvas?

Tom: I use a mid tooth linen sized but not primed so it is lovely and brown, and wood, and gesso panels and all sorts of stuff. I try not to be too precious though. Things change.

Lisa: Where can we see more of your work? (Online or in the flesh)

Tom: I am just in the process of moving to a new  gallery in London, but you can see paintings at www.tomhammick.com and prints at www.hammickeditions.com.

Visitors are invited to vote for their favourite paintings – if you think Tom Hammick’s ‘Filling Station’ should be awarded the £10,000 Visitor’s Choice Award remember to vote for work #52 when you pay a visit to the Threadneedle.

The Threadneedle Prize for Painting and Sculpture is open daily from 10am – 5pm from the 25th September – 12th October 2013. Admission Free.

All images are copyright of the artist.