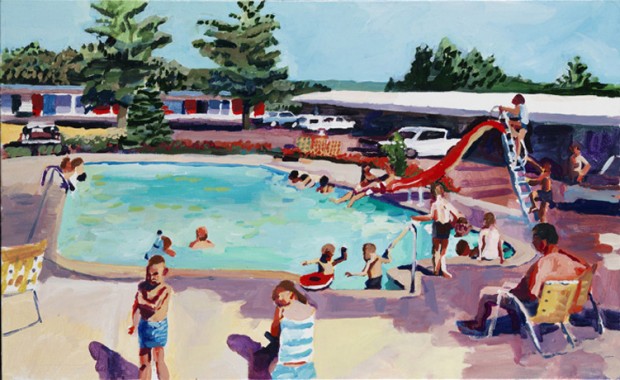 The Threadneedle Prize 2013: A Closer look at Pool Scene by Stephen Abela

Last night the Viewer’s Choice Award for this year’s Threadneedle Prize 2013 was awarded to Conrad Engelhardt for his Cork-filled portrait of Aung San Suu Kyi – congratulations to him for winning the £10,000! However in this, our final Threadneedle post for 2013, we discuss high glamour, nostalgia and vibrant colour with our last-but-not-least favourite Threadneedle contender, Stephen Abela. 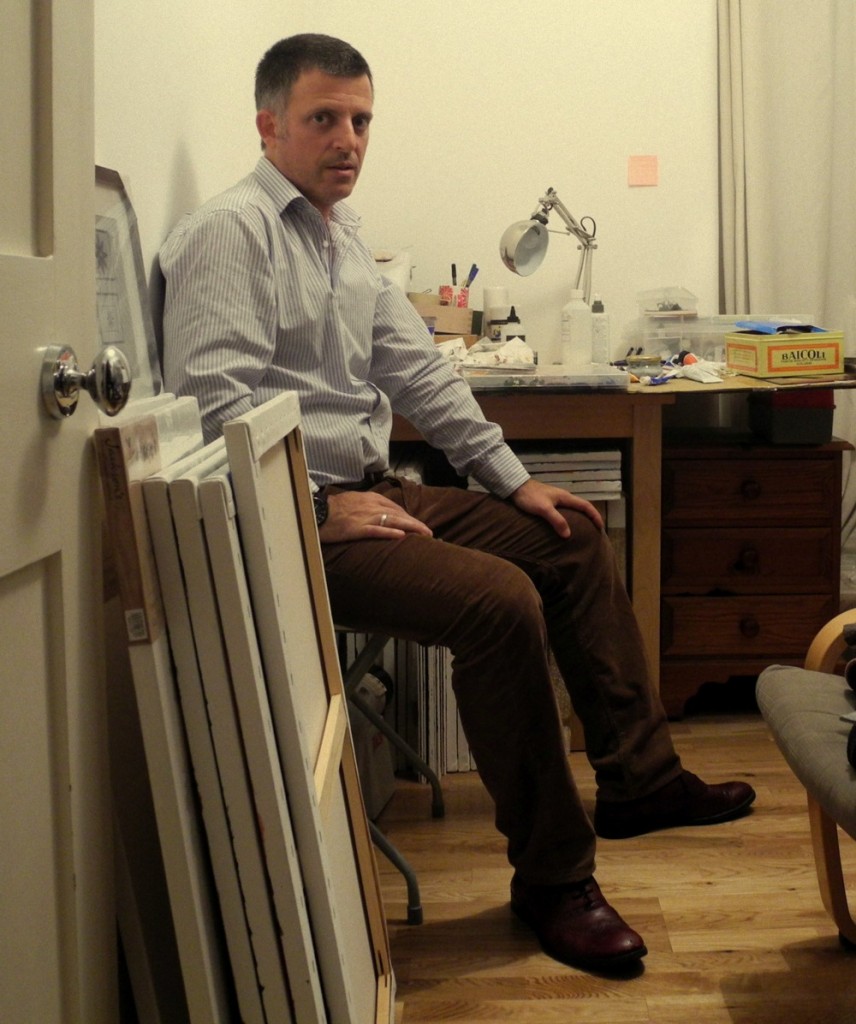 Stephen Abela in his studio

The painting is reminiscent of 1950s watercolour illustration, and depicts an archetypal holiday resort pool scene – this pool scene could pretty much be anywhere in the world, and almost any time in the world, although thanks to the manner in which it has been painted, as well as the cars and the outdoor furniture, it points to the 1950s and 1960s. There is something very idealistic about the painting – no one has a care in the world, all are relaxed and enjoying their holiday and the company of their family. The painting is filled with light and posterised, saturated colour…the reds used are very primary and saturated, and the most powerful, and although the other colours in the painting are lightened with plenty of white acrylic paint, they appear bright and vibrant as opposed to gaunt or washed out. I asked Stephen Abela about his work.

Lisa: What draws you to the subject of the pool scene?

Stephen: The pool scene painting is based on a 1960s postcard image. I like this type of subject for two reasons. First it has an almost classical setting in terms of figure and ground; near naked figures against idyllic natural backdrops as in a Titian or Veronese painting. In this scene in particular the figures are in motion and there is a lot of action, you could say it has a baroque sensibility which appeals to me.
The second reason is nostalgia. As a child growing up in Malta in the 1970s and 80s I spent a lot of time around pools and beaches so it’s a kind of nostalgia for another time even though perhaps one mostly in my imagination.

Lisa: Who are your influences?

Stephen: I admire the Bay Area painters, especially Richard Diebenkorn. There is also this lesser known second generation Bay Area artist Roland Petersen who I think is underrated. Bonnard, Malcolm Morley are another couple that stand out. I like artists who are are deft and spotaneous when handling paint, like Sargent and Bellows. I just visited the Peter Doig exhibition in Edinburgh, I like his handling of paint for different reasons, its more laboured and layered and has a really sophisticated colour palette.

Lisa: Do you use mediums to manipulate your paint? What brand/s of acrylic colour do you like to use?

Stephen: I am using Acrylic paint at the moment, it dries quickly and doesn’t smell but its not as exciting as oil to manipulate, so I mix various mediums together to build body and give it a sheen. In term of paint brands, Jackson’s, Golden, Liquitex and Winsor and Newton is what I generally use.

Lisa: How do you select your colours for a painting?

Stephen: I generally select colour based on the subject matter, which tends to mean oranges, Naples yellow and crimsons for figures. I use a lot of turquoise and cerulean blue for pools and sea. I would say I tend toward a more impressionist palette, I don’t exclude blacks or greys – but I use primaries where I can. Often when painting from an old photo I am captivated by the printing ink which bleeds and is slightly blurred and you can see the individual colours used -which gives it a sort of Impressionist – Divisionist feel and makes me want to replicate the colour effect on canvas. I am always looking for new colour combinations that appeal to me as I don’t think of myself as a natural colourist and I have had to learn to use colour by trial and error. I borrow where I can I still make mistakes, although hopefully not such bad ones anymore.

Stephen: I like to think and talk about painting from photos vs from ‘real life’ as this subject is such a complex and sometimes contentious issue. In fact I think you could write a book about it. When I was in art school in the 1990s there seemed to me to be only two possibilities in relation to photos and it was a polarising situation. It was either -paint photographs exactly as they are; like a photo realist say Richard Estes or like Gerhard Richter and reduce painting to a mechanical reproductive process -or avoid painting from photographs entirely like Freud or Auerbach. I think we are now at a point where artists like Doig and Tuymans have made it ok to use photos and in a less ironic way and divisive way. Possibly photos have become more part of our lives, more personal, more ‘natural’ and thus a more acceptable starting point for a painting. I don’t feel its so much of a taboo anymore but (to paint from photos) can be a crutch and at times trivialise painting – if its simply a painted version of a printed image it’s a bit pointless. How you avoid doing this is where creativity and art comes in.

Lisa: Where do you find your subjects for painting?

Stephen: From life, from my head, but mostly from photos! I don’t tend to think about why I like something and want to paint it, I just like an image and feel it has painting possibilities. I always try to avoid just reproducing something because it looks good. I tend mainly to be attracted to colour combinations and compositions that seem out of the ordinary and are not clichés. It is sometimes difficult doing this when painting beach scenes can so easily seem pretty and hackneyed. I probably have some subconscious reason for always picking pools and beach scenes but I’m not quite sure what that is or if I really want to know. Hopefully it’s not just the pretty colours.

Stephen: At present there are no shows in the pipeline, but you can see more of my work online:
stephenabela.tumblr.com
stephenabela.blogspot.com
artfinder.com/stephen-abela

The Threadneedle Prize for Painting and Sculpture is open daily from 10am – 5pm from the 25th September – 12th October 2013. Admission Free.

The Threadneedle Prize for Painting & Sculpture 2013, at The Mall Galleries, The Mall (near Trafalgar Square), SW1   All images are copyright of the artist.