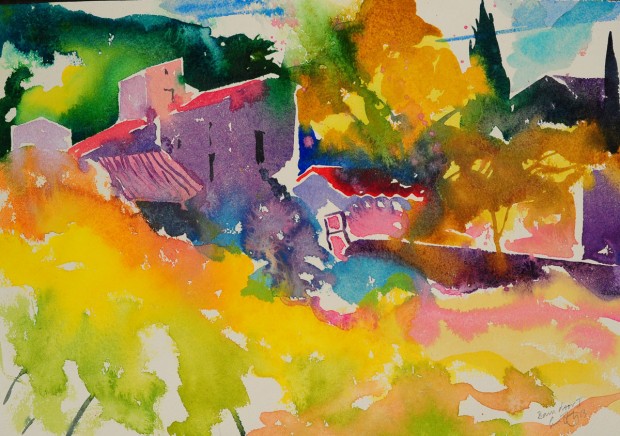 Simon Fletcher’s sumptuous watercolours are primarily concerned with the post-impressionist values of design and colour, and celebrate our 21st century world in a manner that exudes emotion. The colours and marks used in his work allow the subject matter to transcend ordinary existence – these are paintings of heaven on earth; an expression of the divine in the everyday. Although the work is has much in common with the post impressionists and fauvs, it feels fresh, immediate and relevant to now. I asked Simon a few questions about his work.

Lisa: How does travel and painting different environments/cultures impact upon your painting practice?

Simon: From 1982 onwards I began to travel extensively in Europe and painted in nearly every country. I had to learn how to paint in different light, learn about regional architecture and topography and how to compose paintings that would sell but remain good paintings. All these things taught me a great deal and then I had the good fortune to be sponsored by Hitachi to go and paint in Japan. I went there with several years of experience in painting outside in different conditions and countries and this helped me to make forty or more paintings of this fascinating country.

I began to really concentrate on my brush drawing and colour, to render a subject in a kind of synthesis  that is unique to watercolour. Often when travelling there is only a short time to paint a subject and watercolour has traditionally been used for making sketches that can be worked up later in the studio. I wanted to use it differently, to make complete works on the spot on a larger scale so I had to learn to paint fast. 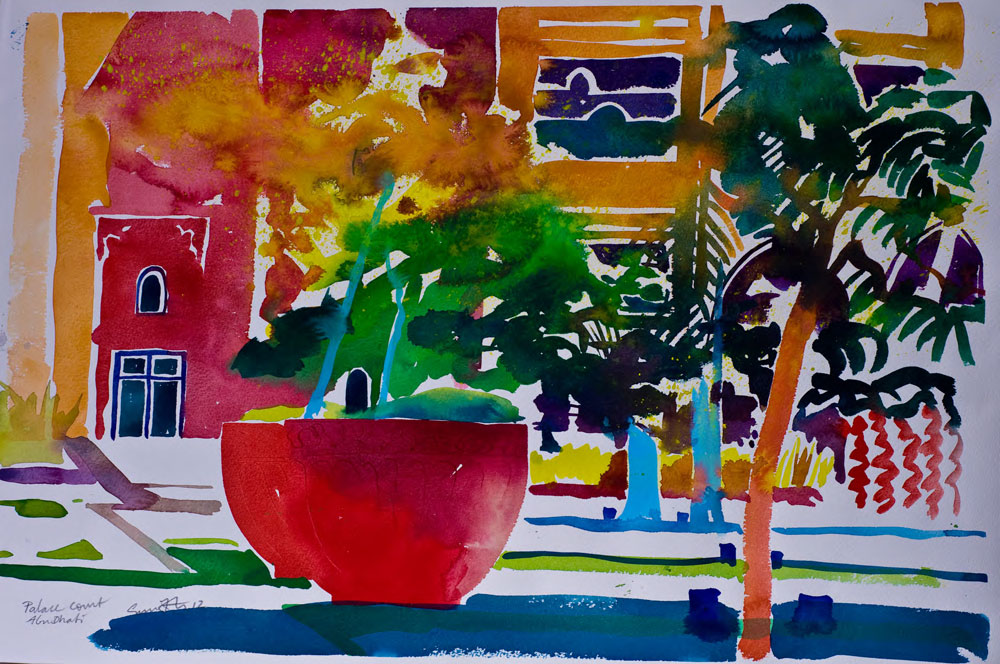 Lisa: Your paintings are rendered in vibrant, harmonious, colourist hues. How has your palette selection evolved throughout your career and do you have any words of advice for anyone who struggles to get colour right in their work?

Simon: I think that colour is very personal and hard to teach unlike drawing which I believe can be learned. The English tradition of narrative art is based on telling a story, often a drawing with colour added; painting is based on the expressive use of colour without recourse to narrative, quite rare in English art.

I noticed quite early that I loved what watercolour did without any help from me, the way it mixed itself on the palette for example, but that when I tried to get something like  this on paper it just didn’t happen. These days I think it does and this is due to a careful choice of colours which have evolved over the years and which I stick to closely. Many of the old, fugitive colours that we had to make do with thirty years ago have been replaced by far better, light fast, powerful pigments which have radically changed what can be painted in watercolour.

My advice is to find the colours that feel right and not to use too many in the palette; play around with the colours trying out un-premeditated colour combinations.

Lisa: What is the most important lesson to remember when making art?

Simon: It should be honest, it should say something important to you when you’ve made it and it should excite you while you’re making it and when it’s finished. 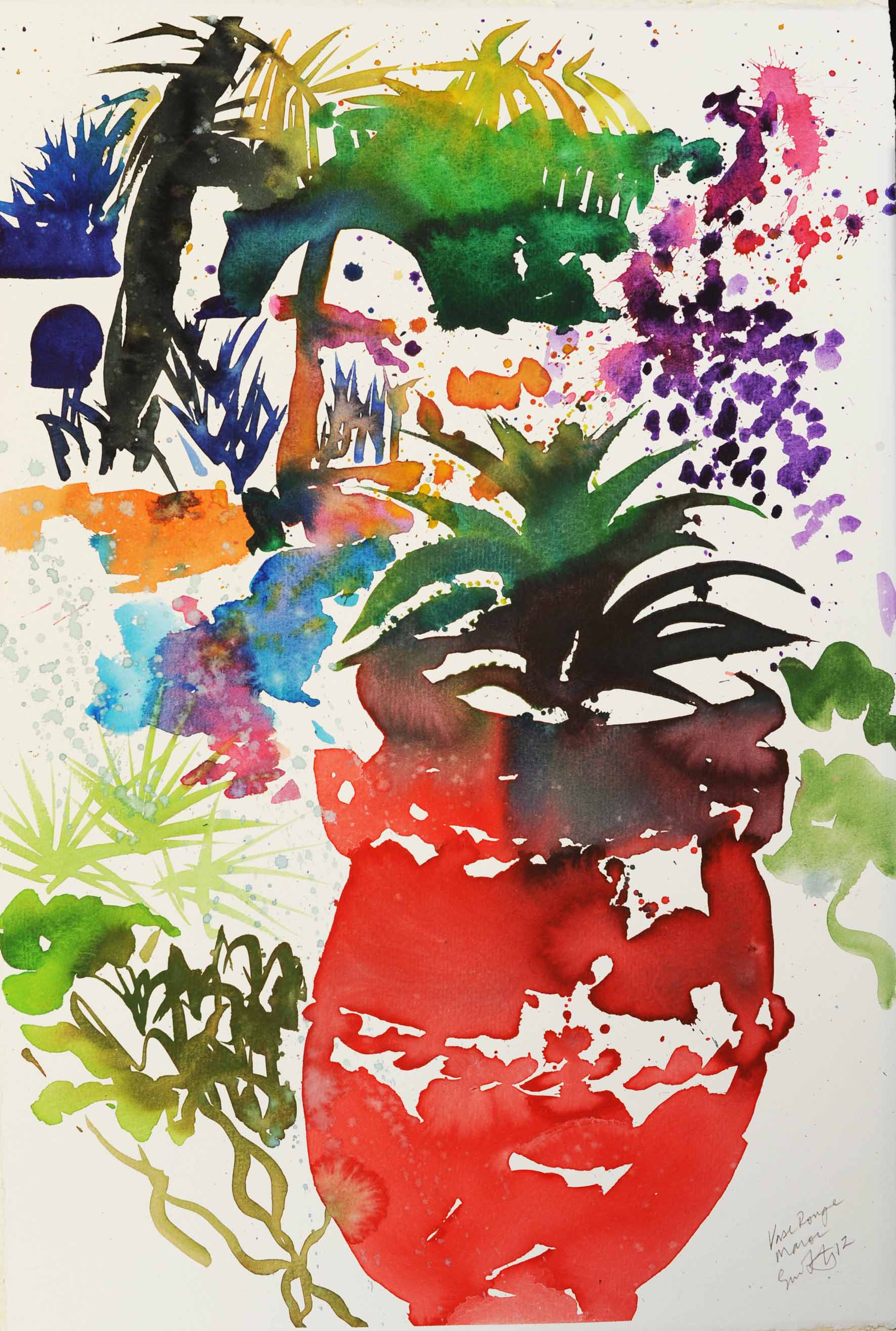 Lisa: There is a really interesting juxtaposition in your work between the chaos/energy of the spills, stains, splatters…and the very descriptive, considered, detailed rendering of forms identified in the landscape, or in architecture. Can you tell us your thoughts on what the spills, stains and splatters add to the work?

Simon: Watercolour is about water, it flows and it has its own irrefutable nature. For years I worked against this, using colour rather dry and not allowing the water to run about as it does naturally.

These days I try to have a more natural relationship with water and use its fluidity as an accomplice which I find exciting and stimulating – spattered colour also works with white paper to produce pale tones which are not flat like washes and spilled or spattered colour causes unusual textures and colour combinations.

Lisa: You have recently been working on some murals based on your watercolour landscapes. Can you tell us a bit about this project, in particular what impact scale had on your work and whether you had any surprises when working on the project?

Simon: This project, a mural covering 50m² over four walls which has taken nearly two years, will hopefully be the first of a series of mural projects based on original paintings enlarged for use as wall decorations. The scale of the project suggested a looser handling of paint and vibrant colours and I was pleasantly surprised at how it dramatically changed the dynamic of the room but I also now know that I need to enlarge the paintings still further before I can achieve the effects of colour and texture that I want. 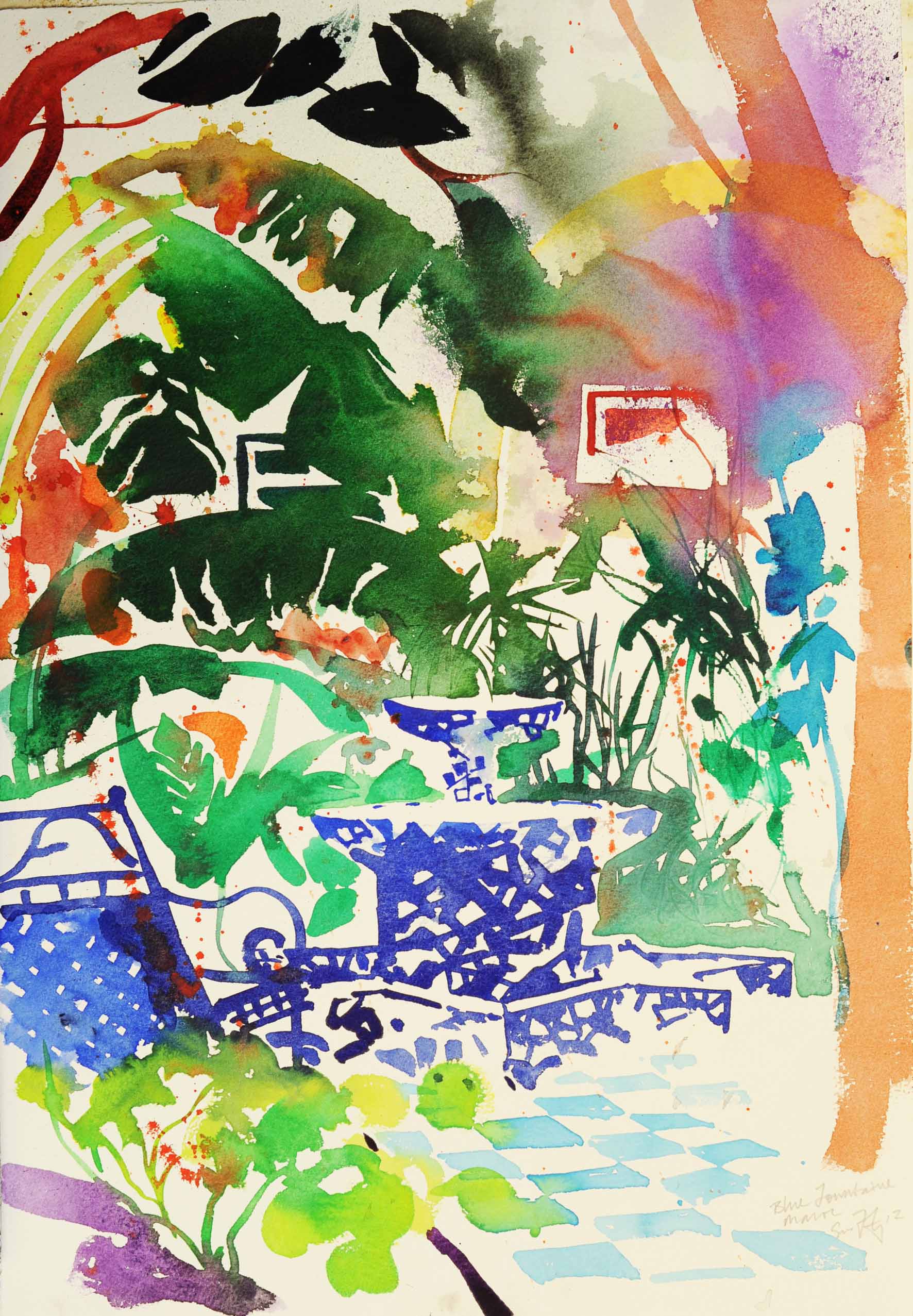 Lisa: Are there any works of art/artists who you particularly admire?

Simon: There are many artists whose work has influenced me over the years but I think as I get older I’m less influenced having I believe, at last arrived at my own style of painting.

Of course I go on looking and learning from Turner who constantly reinvented the medium of watercolour, but the last time that I was influenced by painters that I admire was when I began to work in Germany and Austria which have long been countries where watercolour is  respected and eagerly collected.

Although little known outside Austria the painter Kurt Moldovan (1918 -1977) attracted me immediately because he obviously loved the watery nature of watercolour and the freedom this allows the painter and his free flowing painting employed often vibrant colours, good modern painting.

For a while I corresponded and exhibited with another Austrian, G Salzmann (born 1943) who has shown in Britain and whose use of washes and fine drawing has long been appreciated. His limited choice of subjects allowed him to expand on these subjects fully and I admire his watercolours built up with all sorts of subtle techniques.

The American John Marin (1870 -1953) who was one of the first painters to grasp the potential of the modern cityscape as a subject.

Lisa: Do you always paint your watercolours in front of the subject?

Simon: No. Larger works have to be done in the studio as it is difficult to take boards that measure up to two metres long outside and I normally paint watercolours flat. I will however often make studies outside from which the finished studio works are done. 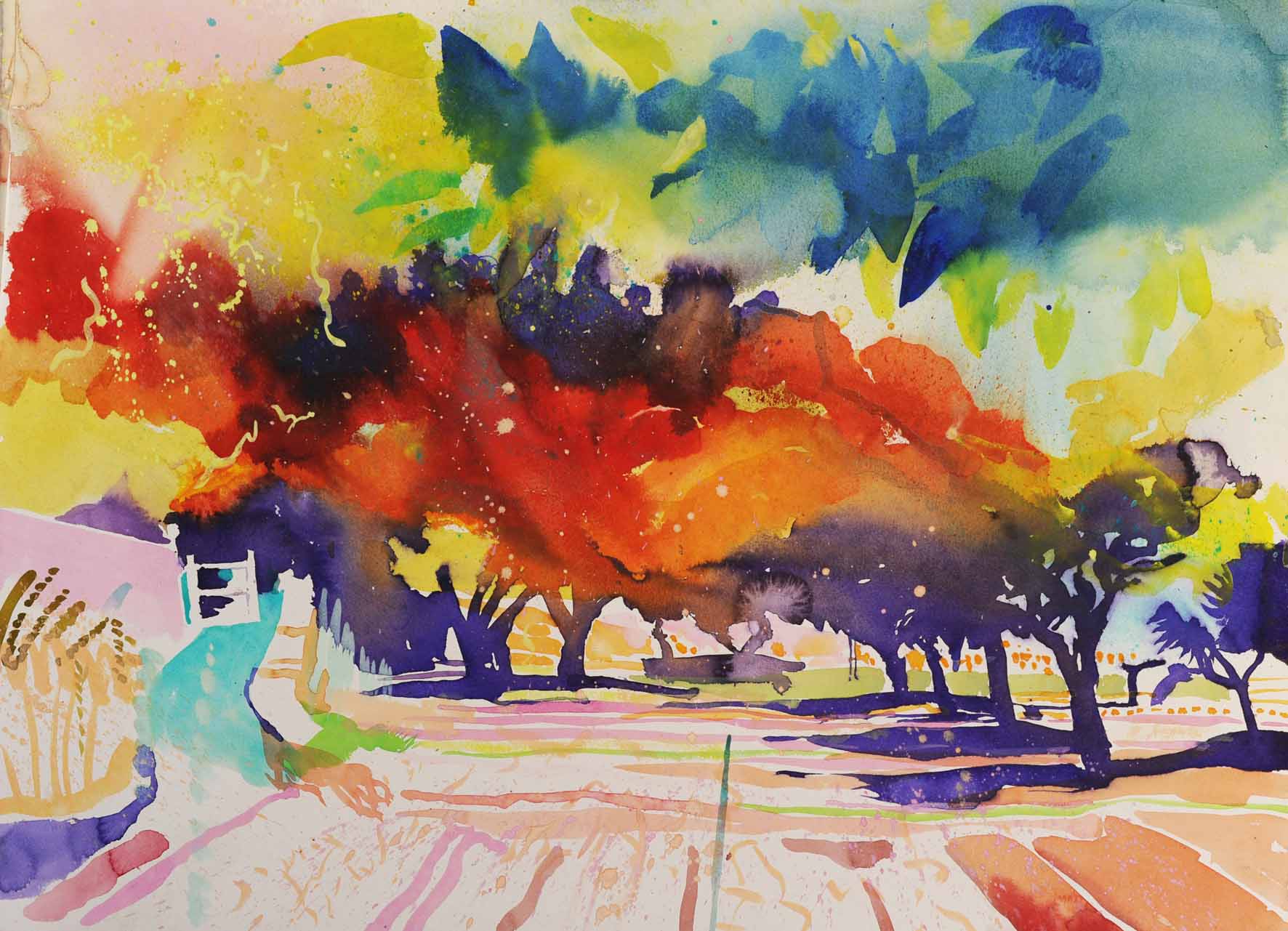 Lisa: Do you have any words of advice for anyone curious about trying their hand at watercolour?

Simon: My website, www.simonfletcher.org has some recent work and a list of publications some of which are still available. In Germany my work can be seen at Galerie Hyna, Tegernsee, Munich, in France at Atelier Simon Fletcher, 34610 St Gervais sur Mare. The recent mural “La Clape” can be seen at Château Camplazens, Armissan, Narbonne, France.