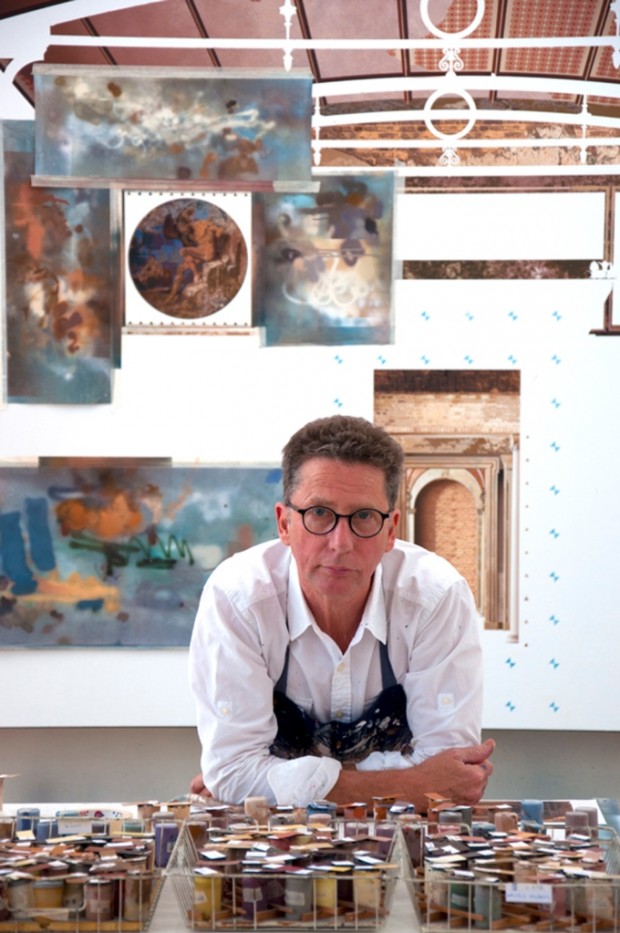 His painting, ‘Room Of the Revolutionary’, depicts the site of the assassination of a Mexican Revolutionary, a opulent interior that has been attacked with bullets. Two beautiful antique chairs have been ripped to shreds, while in the centre, a gilt framed mirror has been smashed and shattered. Johnson said of the painting, ‘I was moved to reconstruct this space as part of my preoccupation with the influence of the past on our present state and the power of history in guiding us to form our own values. Behind every façade lies another layer or story, and all actions leave behind an energy that we as spectators can choose to contemplate or ignore.’* 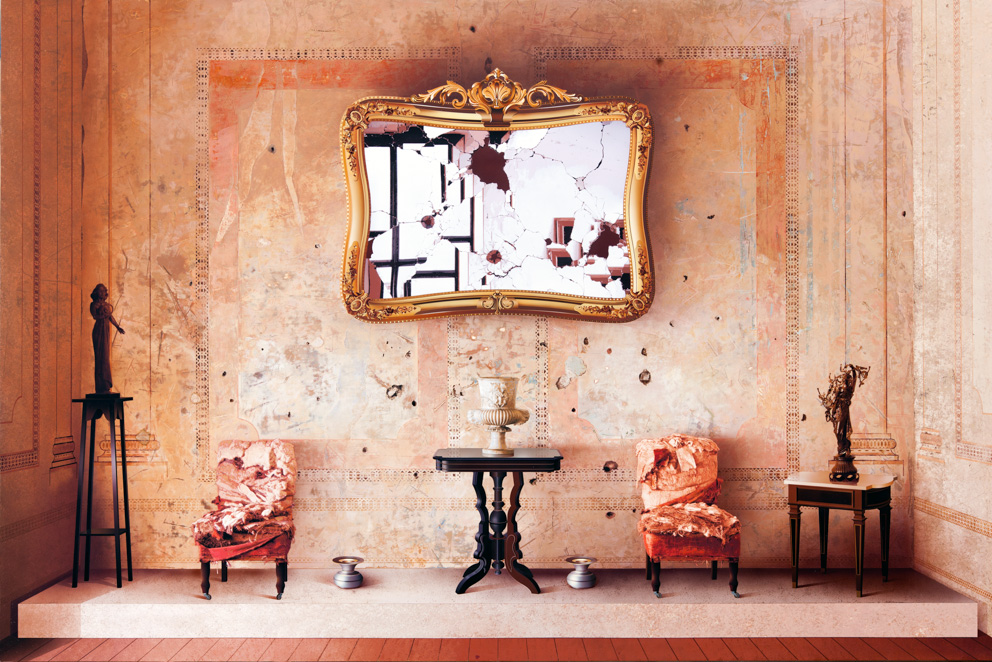 Ben Johnson: ‘Room of the Revolutionary’, acrylic on canvas, 225cm x 150cm (image courtesy of the artist and The Alan Cristea Gallery)

Lisa: Does recognition for your work, such as winning the Visitor’s Choice Award at the Threadneedle Prize, influence your studio practice?

Ben: Almost every artist needs reassurance that what they spend so much time working on and agonising over is appreciated by people outside the studio. Most artists are both arrogant in their self belief but also deeply insecure and uncertain that their work has any value. Even the smallest compliment keeps one working and determined to do even better next time. 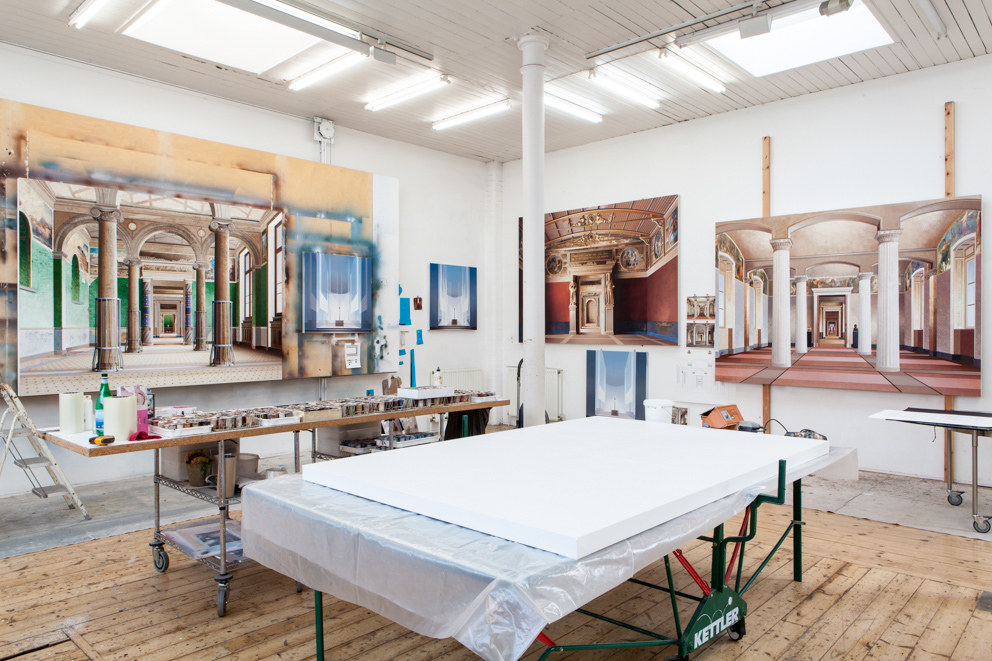 Ben Johnson: Studio Shot of ‘Roman Room, ‘Room of the Niobids’ and ‘Fatherland Room’ (image courtesy of the artist)

Lisa: What work have you been most pleased with in 2014?

Ben: With ‘Room of the Revolutionary’ I believe I entered in to new territory; a much more personal statement about what drives me. The subject forced me to consider my own motivations and past experiences, this search also made me find an alternative method to painting than my previous rather objective process of using a spray gun. The whole surface has become more tactile and is subject to more random patterns. 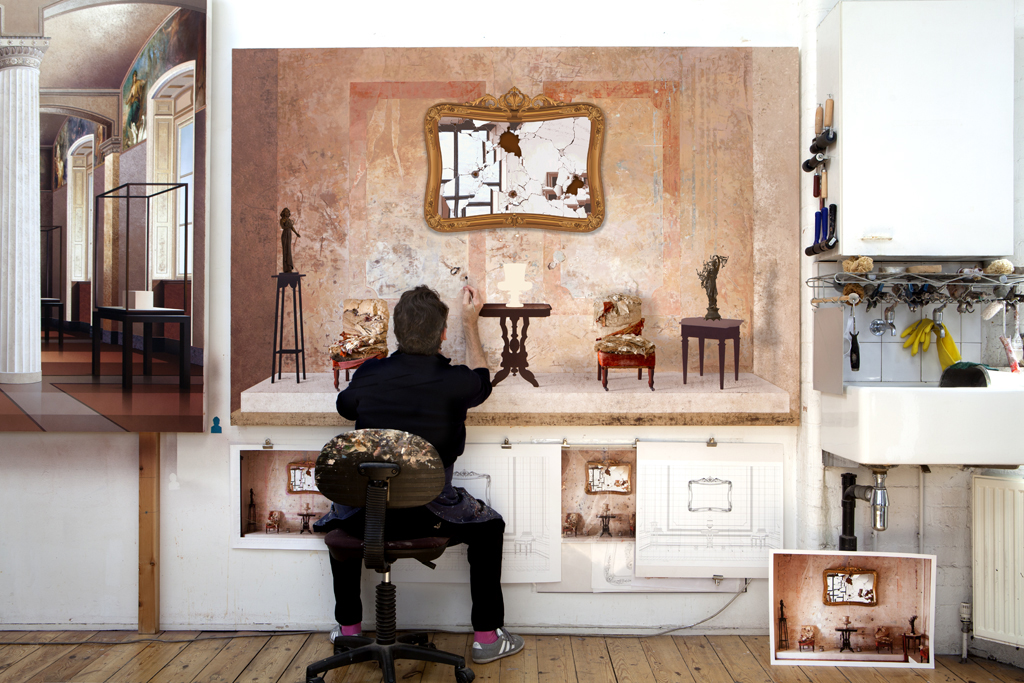 Ben Johnson: At work on ‘Room of the Revolutionary’ (image courtesy of the artist)

Lisa: What has been your favourite exhibition this year?

Ben: Anselm Kiefer at the Royal Academy. I like powerful, ambitious and heroic painting with depth and that is what that exhibition offered. 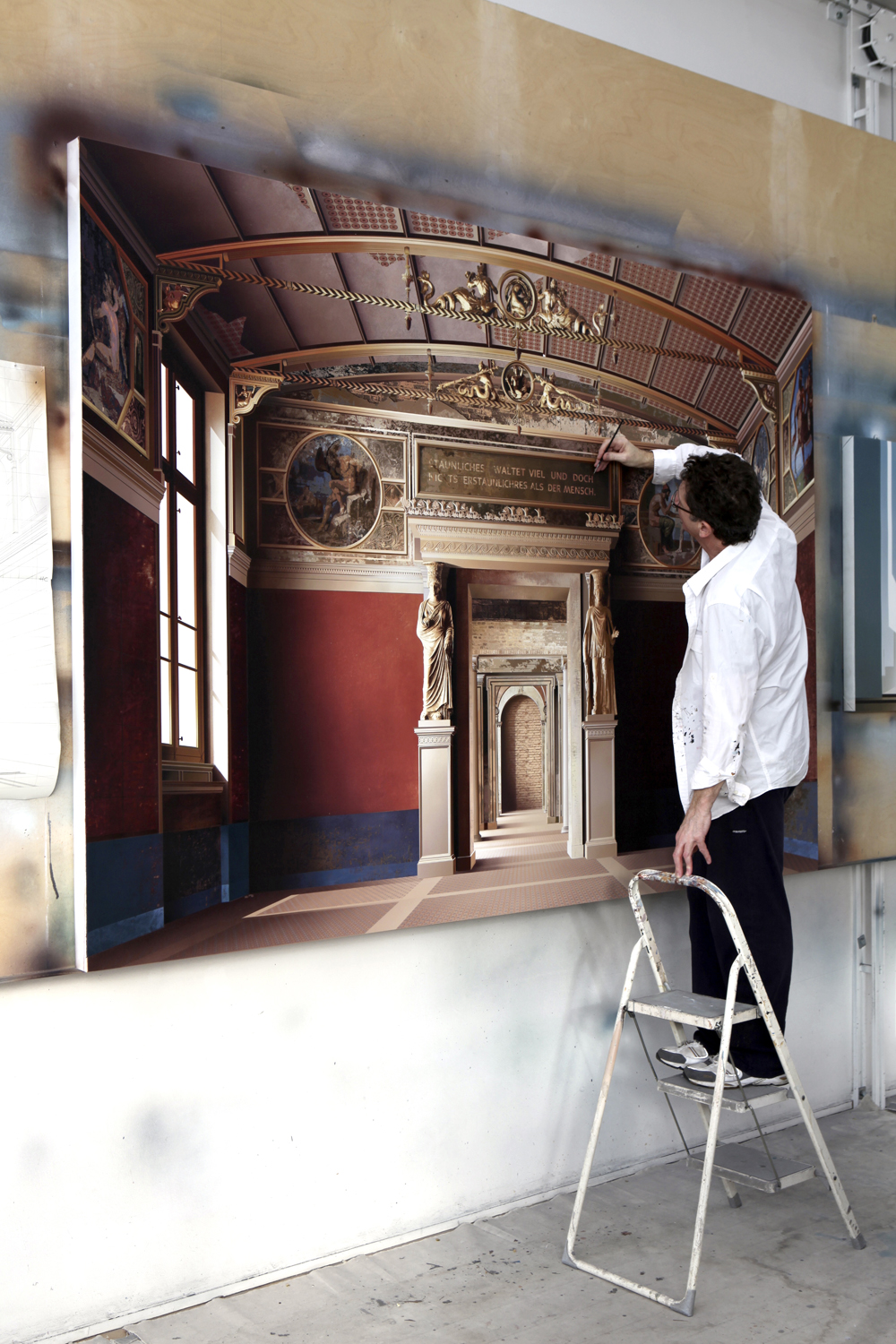 Ben Johnson: At work on ‘Room of the Niobids’

Lisa: What have you learned this year?

Ben: That I still have a lot to learn and there is still so much to learn about how one makes paintings and why.

Lisa: Did you face any creative struggles in 2014 and if so how did you overcome them?

Ben: Intellectually I realised that we are who we are because of our history, and practically that some work can be shared within the studio. There is a huge pool of talented artists in the community who can become part of a team to overcome some problems and create a rich creative atmosphere.I feel very lucky to work with recent graduates or even current students. 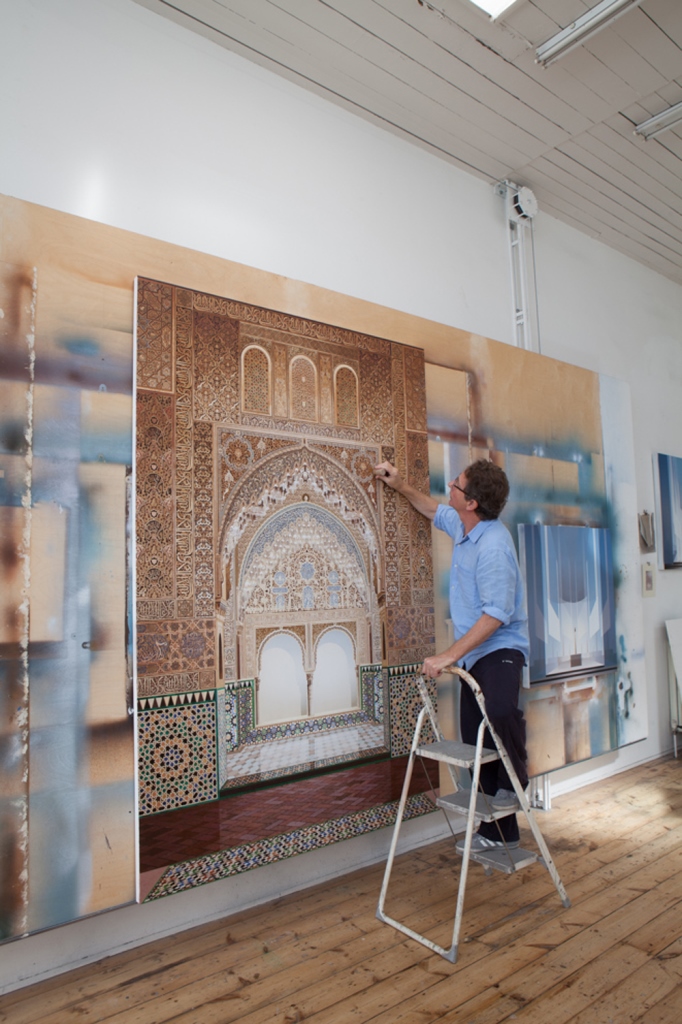 Ben: A very busy and productive time, I have three major paintings to finish and two new works to start, in September I am having a survey of almost 50 years of my output at The Southampton City Art Gallery, it will be titled The Spirit of Place and open mid September and run for 3 Months. 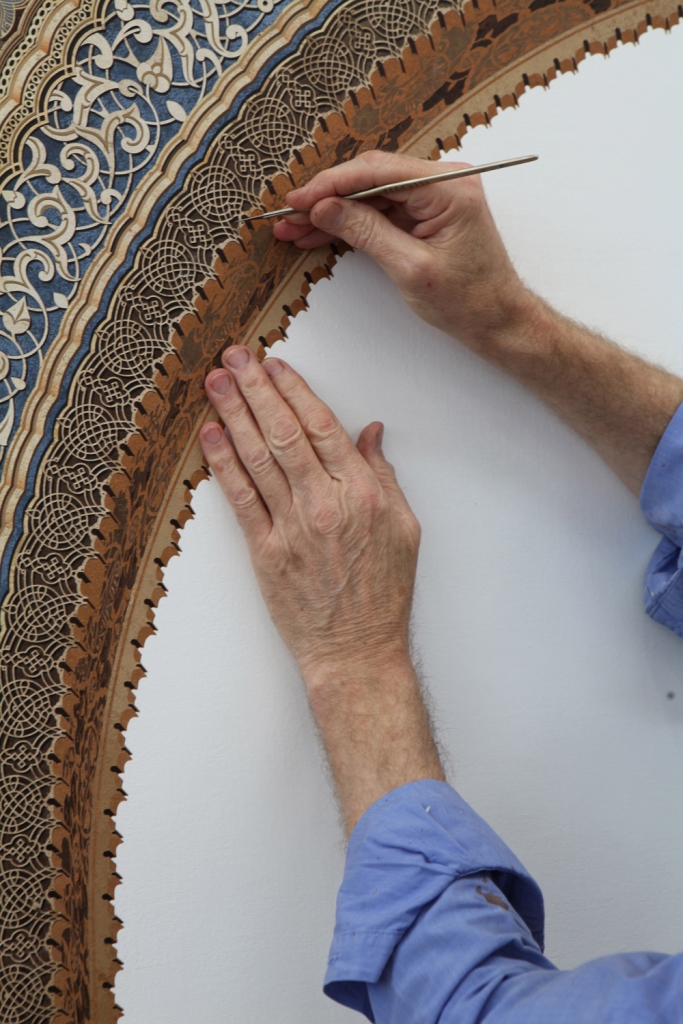 Lisa:  What colour could you have not done without this year?

Ben is represented by The Alan Cristea Gallery

*quote taken from Apollo Magazine, May 2014 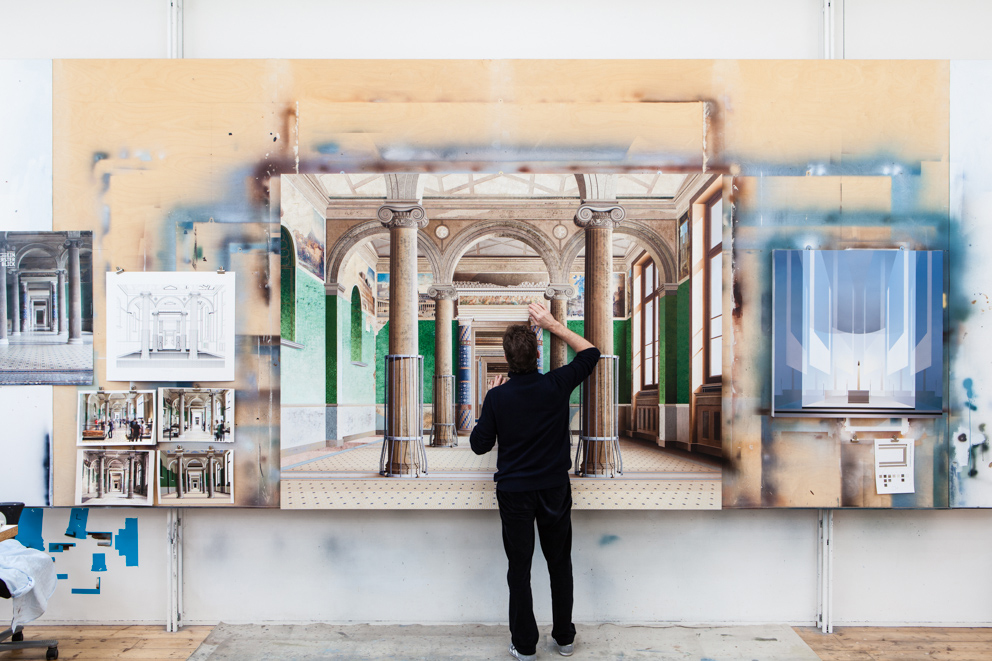 Our wide range of fine art brushes are excellent q

This selection of M. Graham watercolours has been

The Turner Acryl Gouache range is ideal if you are

Khadi's Log book is an excellent book for working

Founded over 100 years ago as the Namiki Manufactu

We've teamed up with Schmincke to curate a selecti