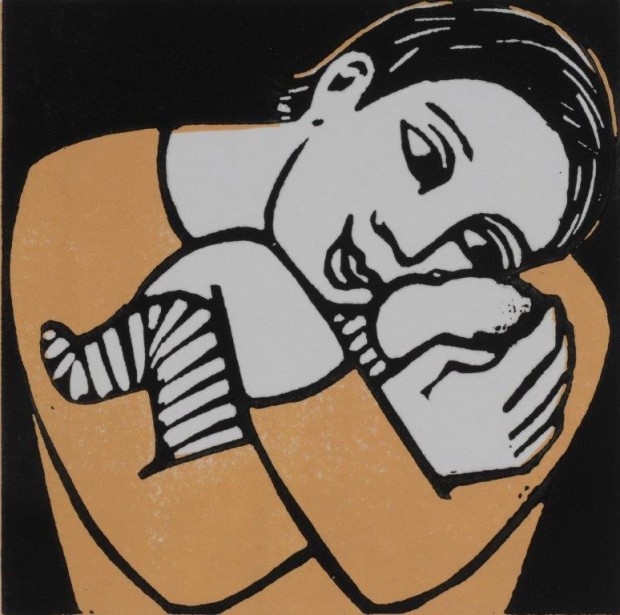 Anita Klein has been working as an artist for over 30 years. Her career started as a result of a ‘cross-road moment’. One day she found herself faced with a decision to either accept the prestigious offer of a job as an illustrator for Good Housekeeping magazine, or choose to take the risk of pursuing her art and working for herself. She took the call on the same day she discovered she was pregnant with her first child. 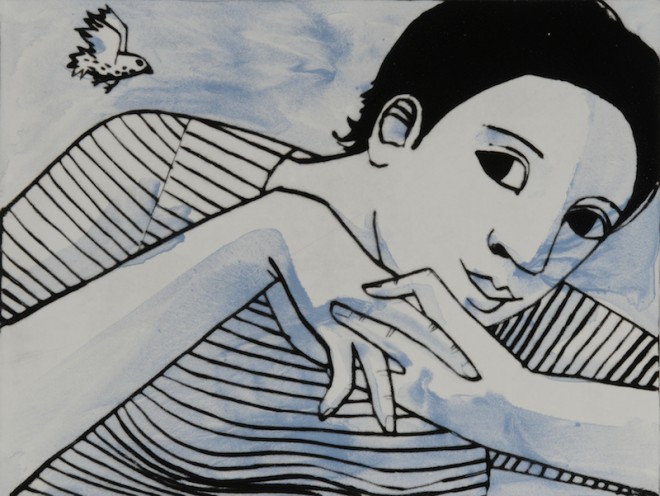 She trusted her instincts and politely declined the job offer, and has dedicated her work ever since to celebrating the joy she finds in the everyday. Her paintings, prints and drawings are drawn from her imagination, yet reference very real memories, and as a result often depict her husband and daughters carrying out very familiar activities, such as watching television, cooking, reading and going for walks. The familiarity of such activities combined with a style that pares forms down into strong and simple shapes transforms the images into icons for the everyday. It is no surprise then that Anita Klein herself sees the frescos of early Italian Renaissance painters as some of the most beautiful works of art in existence. She says ‘I would like my work to be beautiful like that. It’s what I’m striving for – a balance that feels calming to look at, but like Giotto or Piero della Francesca, includes the viewer by conferring dignity and beauty on the ordinary and depicting it as miraculous.’ 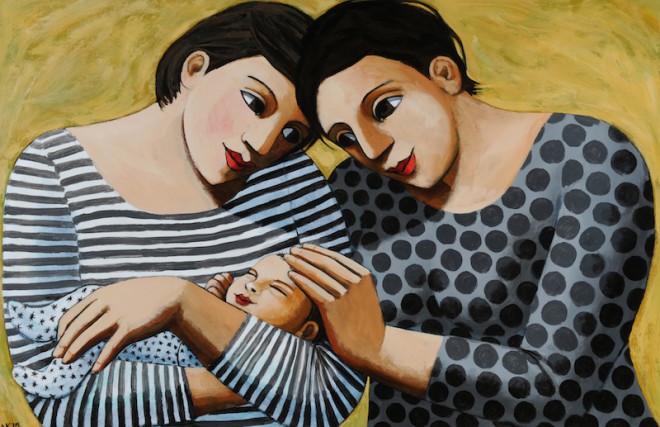 I am fascinated by the fact that Anita works from her imagination. I believe it liberates her creativity from the realistically personal, to the transcendentally universal. It is clear that the presence of a new born baby in her world has provided another reminder to cherish simple things. By witnessing a baby’s response to seeing the world for the first time, she is able to share in the joy that this brings, and then celebrate these in her pictures. Baby Betty opens Anita’s eyes ever wider. 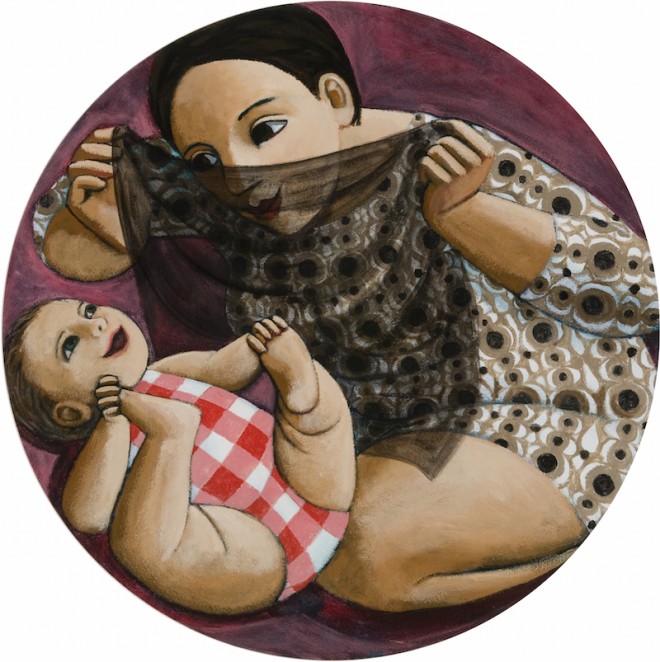 In many of the paintings and prints in the show Anita has used a dark ground on which to work, and then laid opaque colours over the top. The consequence of this is that the pictures have a solidity and warmth about them. The colours need to be very strong in order to cover the black. Shadows are depicted simply and echo the forms that make up the composition. The singular source of light in each of the pictures is often a literal ‘highlight’ – highlighting the simple pleasures of life, as well as formally, allowing multiple figures to often echo one another with stripes of shadow often creating a pattern.. 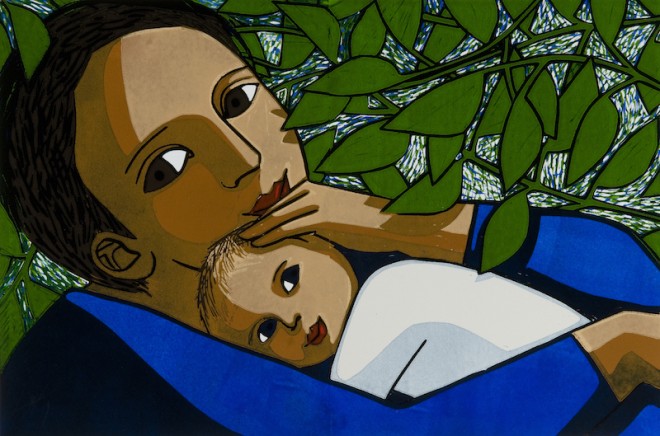 The figures in these pictures dominate the compositions, and background forms are often non-existent or there simply to support the main subject. In ‘Betty and the Leaves’ the shapes of the leaves are almost identical to the figure’s eyes, depicting man and nature in perfect harmony.  The most tender compositions are those that depict Grandmother, mother and child. Klein is the master of designing images that celebrate the interdependence of family. Figures support, complement and intertwine with one another. ‘Fingers and Toes’ is a prime example, with a curve that sweeps from top right down to bottom left, all eyes at the baby, and the form of the grandmother echoing those of the mother who is cradling the newborn. If you follow the lines of the image you can almost trace a spiral whose epicentre is the baby, the adults providing a human nest for the delicate form. 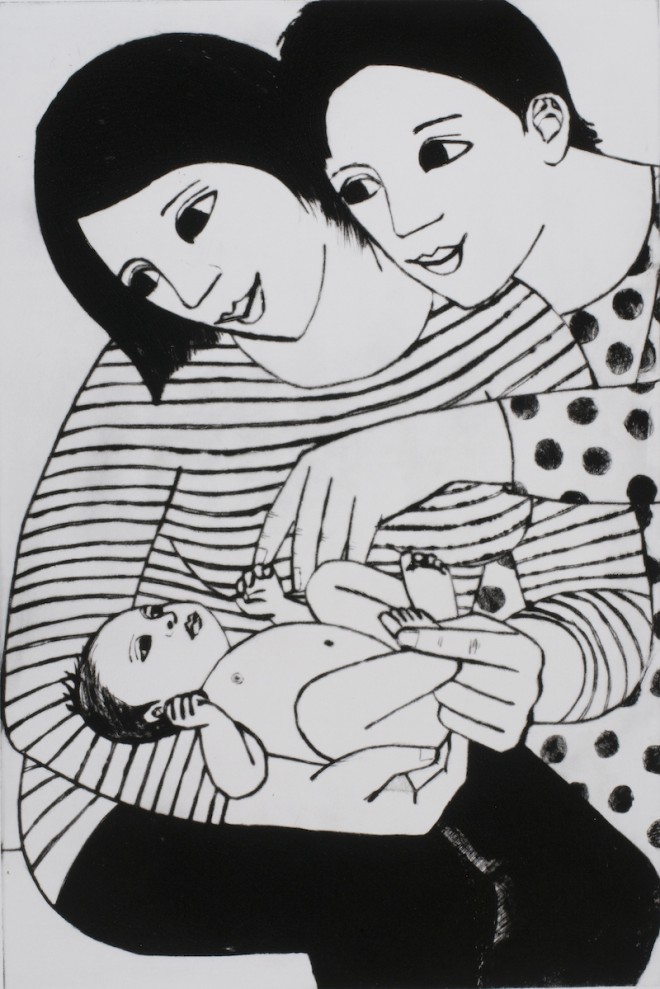 Anita Klein’s work reminds us that whatever is important to you is potential subject matter for art work. Art doesn’t have to shock or criticise. It just needs to be honest and heartfelt.