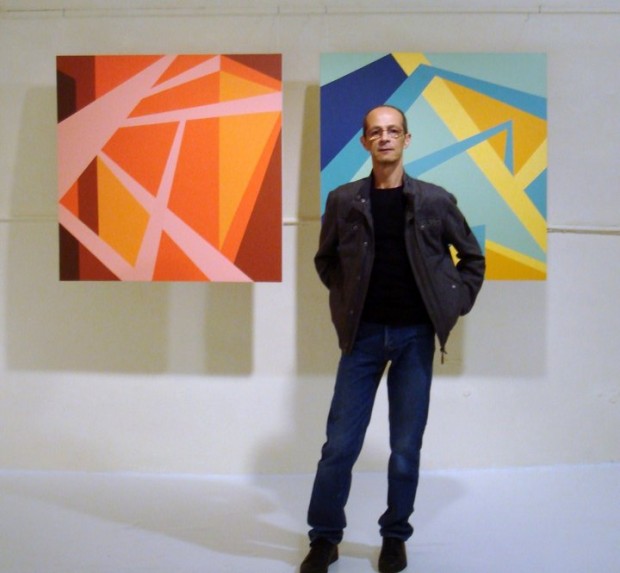 Carlos de Lins is the founder and current director of Espacio Gallery, in East London. He is also a practising artist.

Espacio Gallery opened in 2012 in the heart of London’s East End art scene, standing just 100m from the top of Brick Lane. It was founded by a group of artists working across all visual arts media who wanted a space of their own specially designed to meet their needs. Espacio is a cooperatively run gallery that is funded by its own Artist Members and also by hiring the venue a few times a year to selected external artists or projects.

It is a large, beautiful, well-lit space over two floors with a dark room for video in the lower gallery. There is a new group exhibition almost every week. There are occasional solo exhibitions and participatory experimental projects. Many of the exhibitions include talks, events and performances that support the exhibition.

I asked Carlos a few questions about Espacio Gallery and his experience of being a gallery director for an artist-run space.

Julie: Tell us a little bit about your artistic background.

Carlos de Lins: My artistic studies began at an early age in São Paulo, Brazil, where I attended art school as well as working in the studios of several Brazilian artists. My current interests are focused on the gigantic modern buildings by Sir Norman Foster and others which seem to be continually springing up around us including mega-structures such as Tower 42 on Old Broad Street, 30 St Mary Axe (‘the Gherkin’) and the record-breaking Shard London Bridge. I’m also interested in similar buildings from past decades such as Centre Point and the Canary Wharf Tower. What intrigues me most about these examples of modern architecture is their simultaneous ability to impress and oppress us as citizens, trapped in the landscapes they create. 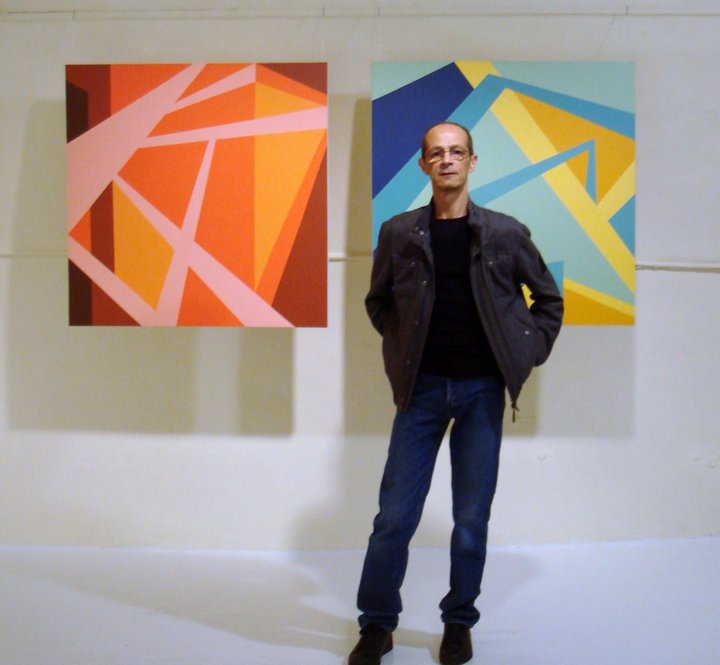 Julie: You were part of a group of artists that exhibited together, finding temporary spaces to show in, before you decided to find a permanent venue. Can you tell us about the process of finding your permanent space?

Carlos de Lins: Yes, I was part of a group of 40 artists. We used to hire galleries and other spaces to exhibit our work but there was always a feeling that something was missing. We never managed to find a space which felt right. After a few years I thought it would be better if we could have our own space. It sounds simple but it involved a lot of time, effort and money. Our group had to grow from 40 to at least 100 artists in order to make the project financially viable. It took us two years to find a suitable venue. 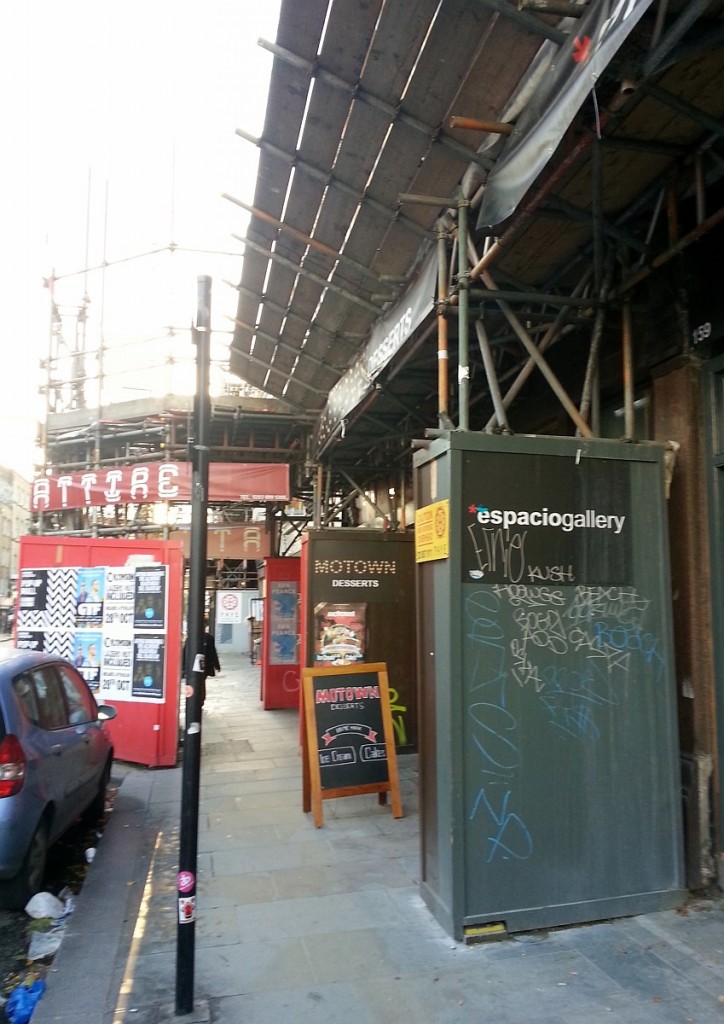 Julie: The area of London where the Espacio Gallery is located has changed in the last few years since Espacio arrived. How much affect do you think Espacio has had in the number of new galleries in the street?

Carlos de Lins: It was a run-down area three years ago when we moved in. I believe that whatever we do there’s always a chain of effects that comes with it. In Espacio’s case I think the gallery and the artists brought a positive vibe to the area making it more appealing to new tenants. Nice shops and cafes usually prefer to open next to ‘other nice places’ rather than the opposite. The downside is that the area is becoming ‘too nice’ which presents a huge problem for us in terms of affordability. It’s the usual old story: the artists move in and help to improve an area and after a while they are the first to be kicked out because they’re not able to afford the rent and the costs any longer. 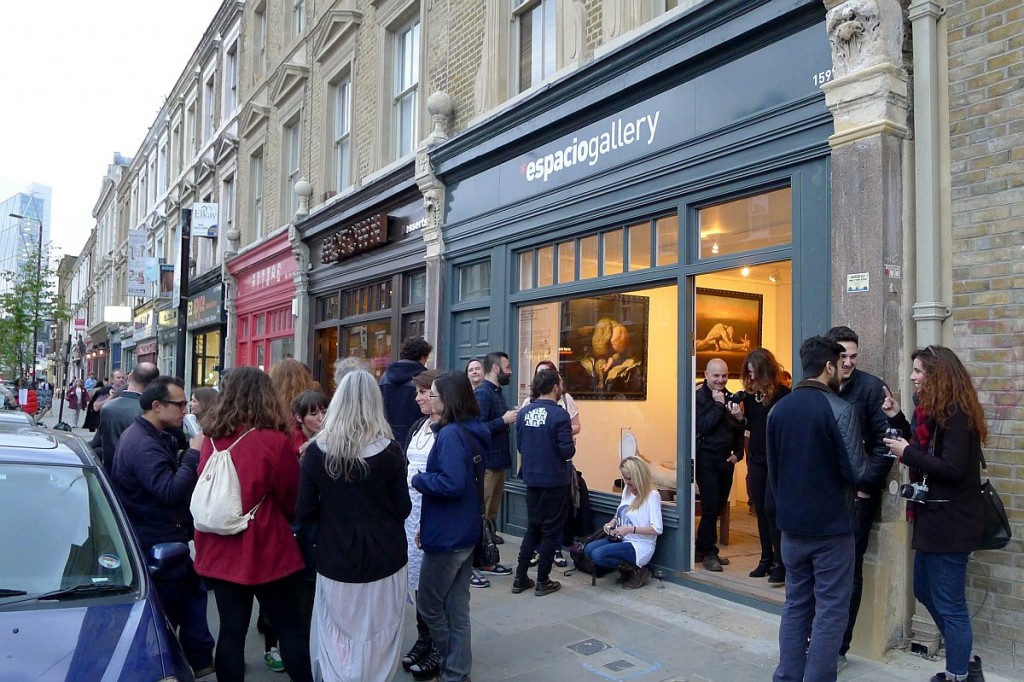 Julie: You have a great relationship with the Whitechapel Gallery located at the other end of Brick Lane. Espacio shows are often on the First Thursday Tour Map. How did this come about?

Carlos de Lins: The Whitechapel Gallery runs an event called First Thursdays in which during each first Thursday of every month the participating galleries agree to stay open until late in the evening. This allows people who usually cannot visit galleries during daytime working hours to come and visit the exhibitions. It takes a bit of effort to keep the momentum going but it’s important to open the gallery to a different audience. 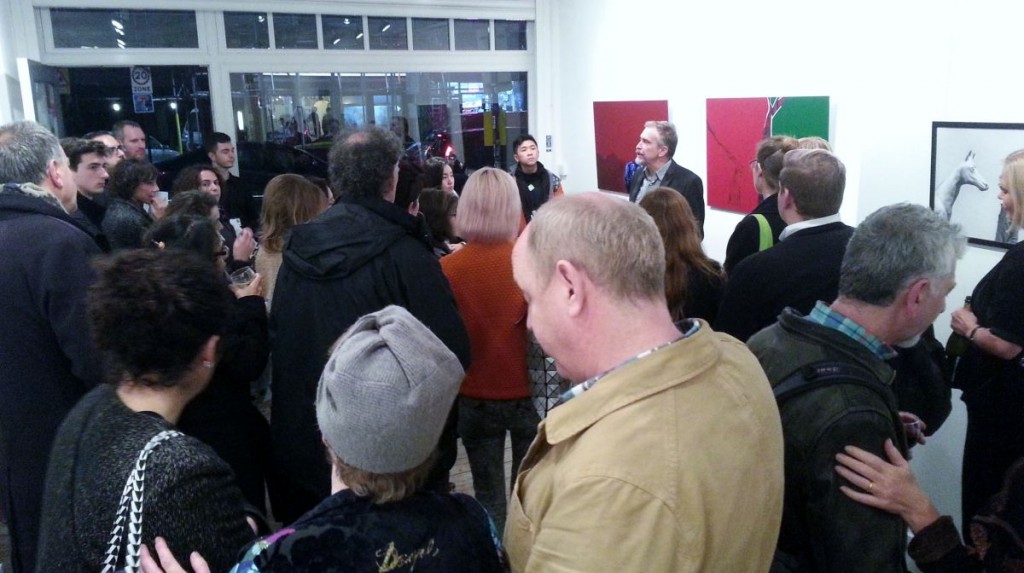 Julie: You have averaged 40 shows each year over the four years you have been open. That must take astounding organisation. How do you do it?

Carlos de Lins: This is a million dollar question – it would take another four years to fully answer. The bottom line is plenty of hard work and full commitment. 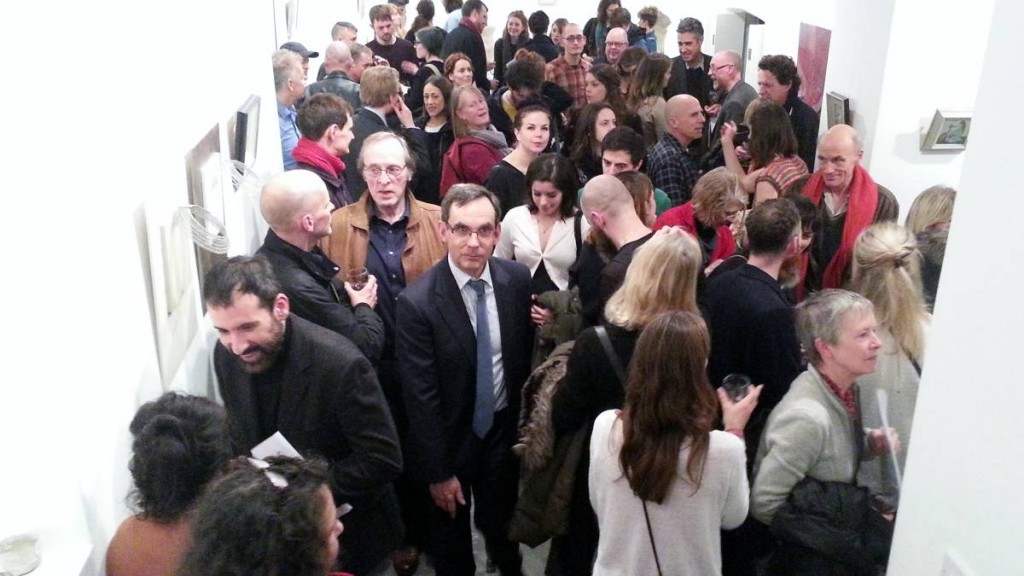 Julie: Are there any Espacio exhibitions that stand out in your mind? What do you think makes a successful show?

Carlos de Lins: There are quite a few but I’ll mention two: ‘Artists in Wonderland’ and ‘Mono’. They presented different challenges for the artists. I believe to produce a successful show we need to put in a reasonable amount of effort, select good quality works, have consistent presentation and hanging, and finally a good promotional campaign. It would be pointless to have gold on the shelves if we didn’t let people know about it. 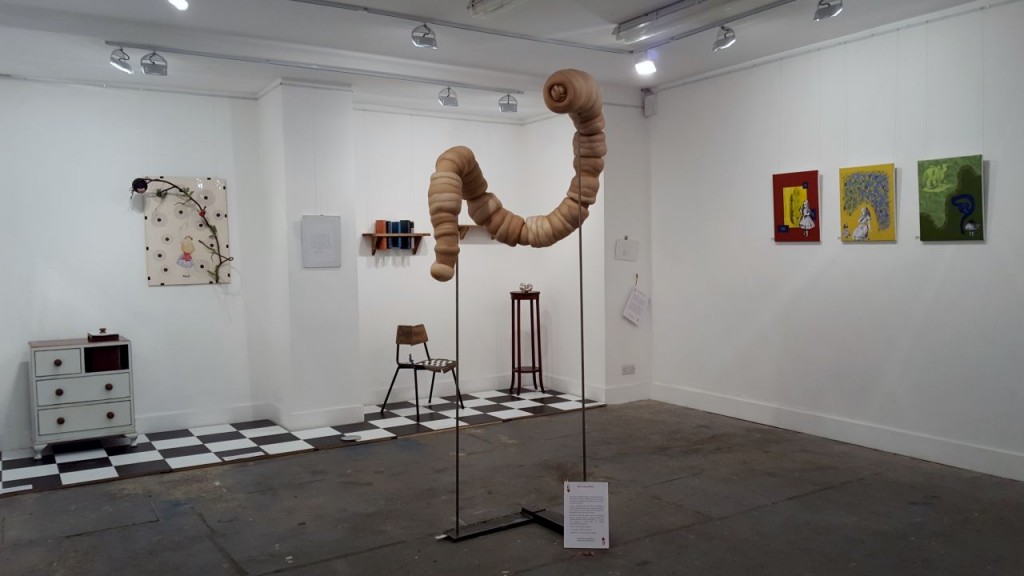 Carlos de Lins: Being director of a gallery presents a lot of different challenges. Espacio is a particular case because its set-up is something in between a commercial, a community and a non-commercial gallery. Sometimes these three different set-ups are on a collision course against each other. My job is to manage the ‘clashes’ and ensure that the system doesn’t collapse.

I like to work with people in general. Perhaps working with artists is a little more exciting because we tend to think that artists are more open minded – not always true though. However it’s difficult to generalise because each individual is a different world. 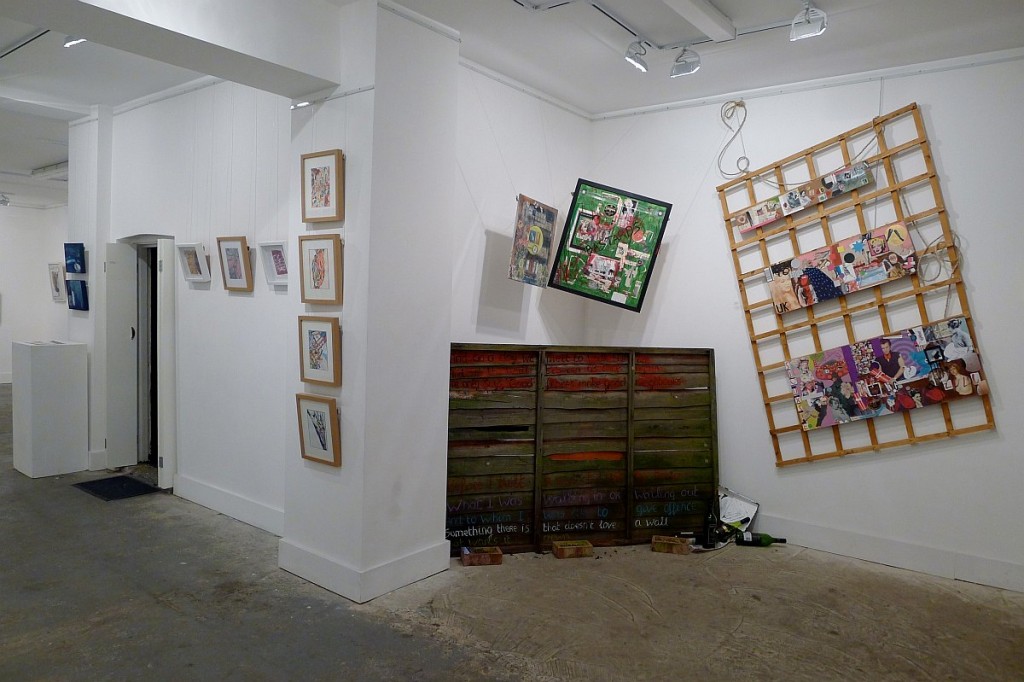 Julie: Tell us about the artists that are part of Espacio.

Carlos de Lins: At the moment our group is formed of about 100 artists. They come from all sorts of backgrounds and each one of them brings something different to the group. We have painters, printmakers, photographers, sculptors, installation artists, conceptual artists, and more. 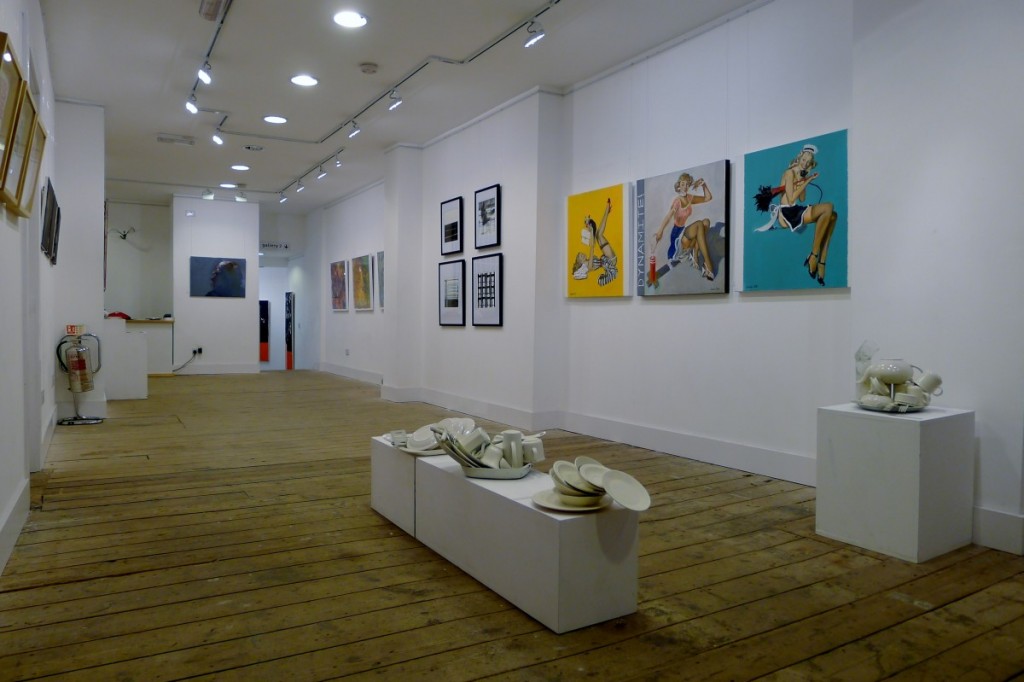 Julie: How can an artist join Espacio? What is the selection criteria?

Carlos de Lins: To join Espacio an artist should send us info about his/her work. There’s a selection committee that will look into each application and decide whether the artist can join or not. 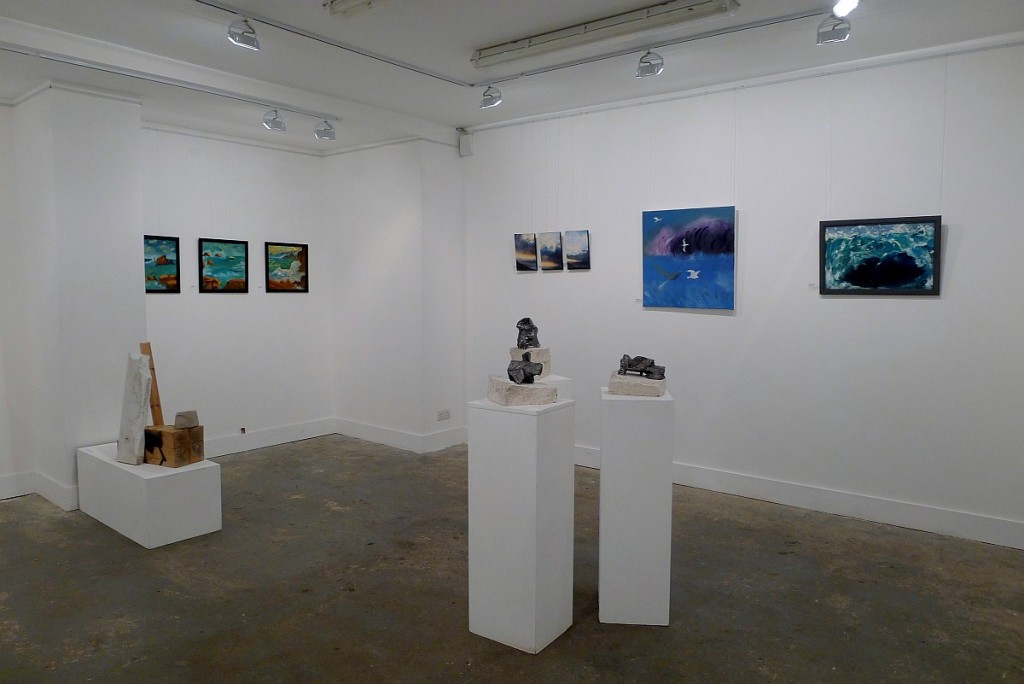 Julie: What is in the future for the Espacio Gallery?

Carlos de Lins: Apart from the fact that we are aware that we’ll have to carry on working hard forever, I like to think that Espacio will achieve something and arrive somewhere – where I still don’t know. It’s too early to tell. 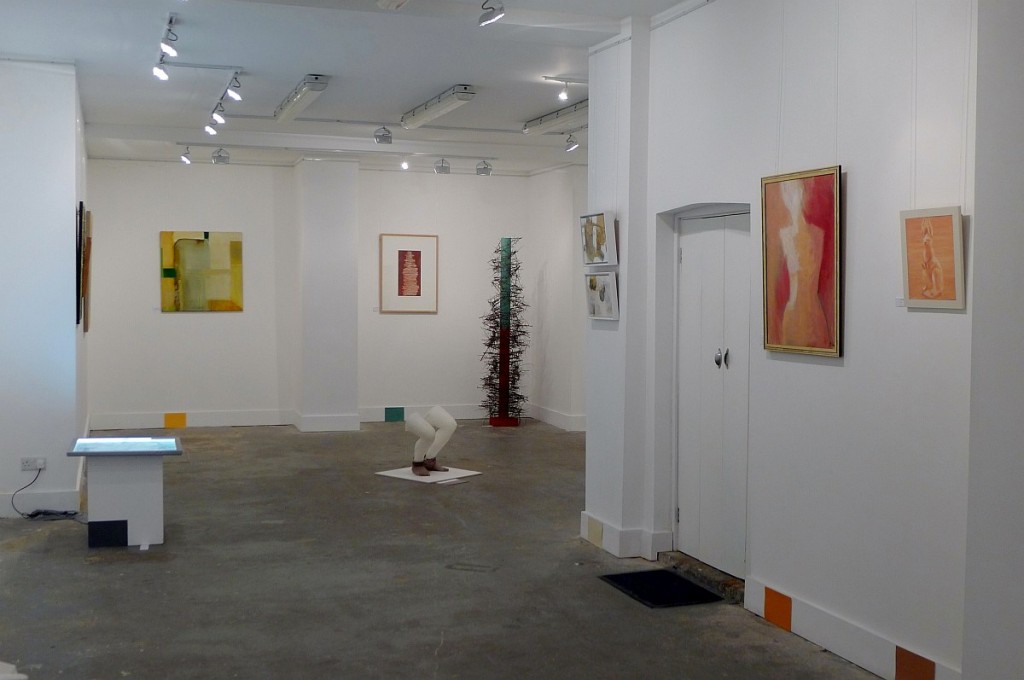 Julie: You are one of the judges for the upcoming Jackson’s Open Art Prize. How important do you think it is to recognise new artwork with prizes and competitions?

Carlos de Lins: There are several different ways of looking at it. Recognising new artwork is important because I believe it boosts the artist’s confidence allowing him/her to carry on working, exploring and experimenting. 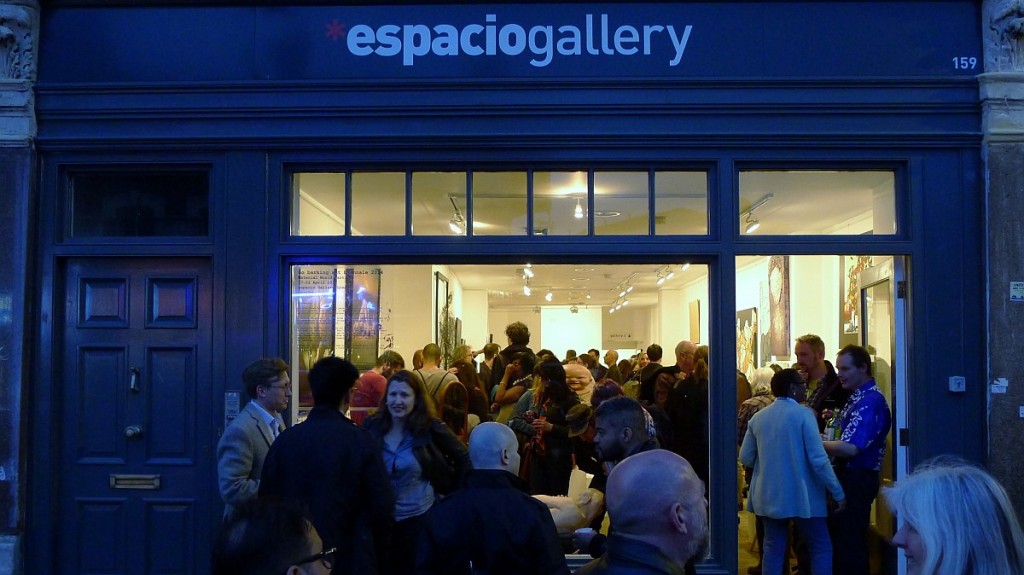 Julie: What will you be looking for as a judge of the JOAP? What advice would you give to anyone thinking of entering the competition?

Carlos de Lins: I’ll be looking for something that catches my eyes and mind. My advice would be: Don’t cut corners. Be consistent and coherent between the subject, the context and the technique. And don’t forget that presentation is top on the list. 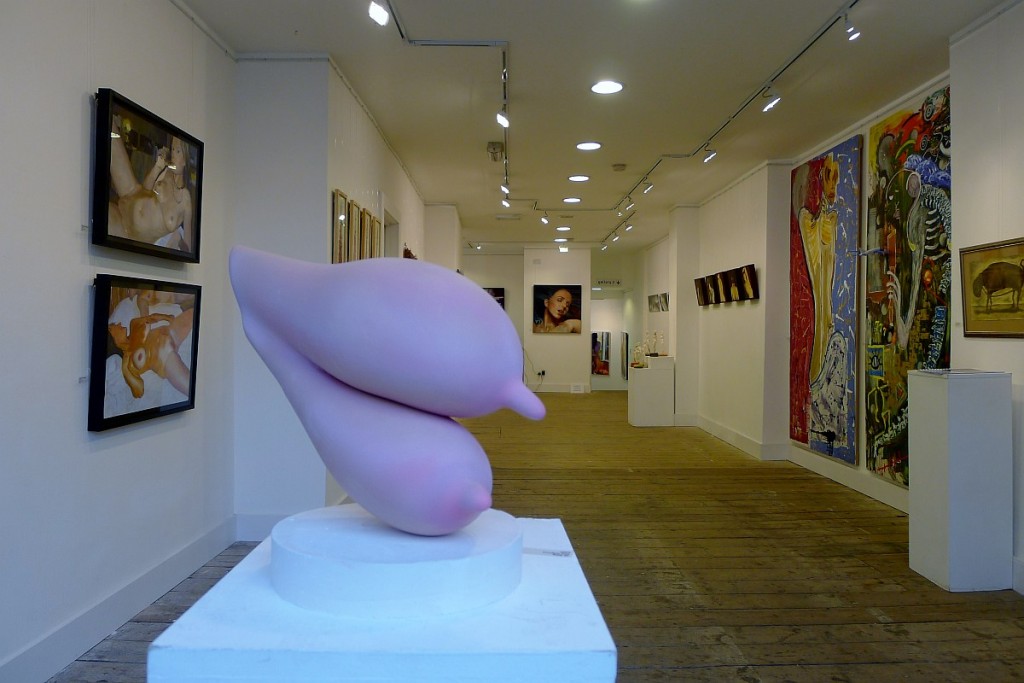 An economical and environmentally friendly alterna

Brexit and COVID-19 have impacted upon art materia

Our catalogues present our extensive range of pain