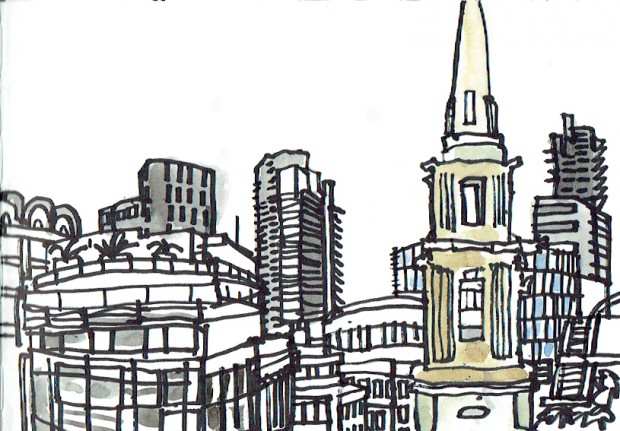 James Hobbs is an artist known for his urban sketches made on the go, as well as being an art writer who was once the editor of Artist and Illustrators Magazine. His new book ‘Pen and Ink’ is published in the UK in June 2016. He is also on the judging panel for this year’s Jackson’s Open Art Competition. We asked him about his work and what he will be looking for when he judges our prize later this year.

Lisa:  What is it about drawing (as opposed to other modes of visual expression) that you are drawn to in particular?

James: I like the immediate directness of it. It can be small, portable, low key. It’s cheap, and a record that survives in your own handwriting. And it can be a springboard to many other things. 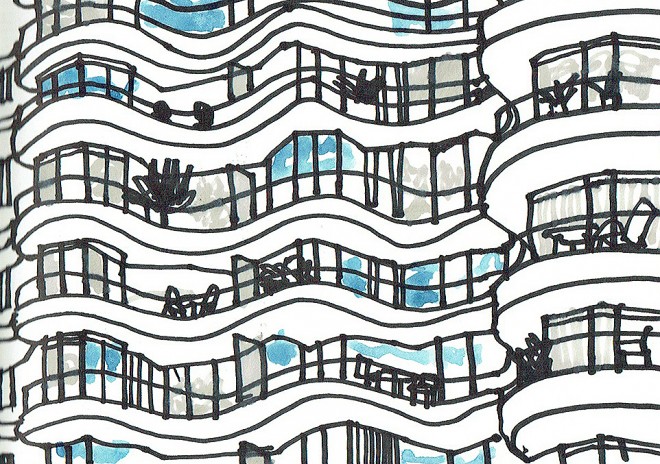 Lisa: You write about art as well as make it – does the writing and making have a relationship? Do you think they support one another?

James: They are both very important to me, but I’m not sure what their relationship is. They live together, in harmony mostly, although from time to time one holds more sway than the other.

Lisa: What’s your favourite medium to work with?

James: My favourite medium changes from time to time. Now I usually carry around thick black marker pens and fairly small sketchbooks. I like the limitations this combination presents: there’s no getting bogged down in details, which don’t interest me. I’ve also gone back to using bottled ink – just black, blue and green at the moment – and using them in the same urgent way.

Lisa: Do you think there is a difference in approach in drawing a picture intended to be framed on a wall and drawing in your sketchbook?

James: I just think of it as drawing – I’m reacting to the subject rather than thinking where it may or may not end up. I’m still not sure how keen people are to have drawings on their wall – the idea that a black and white drawing is simply preparatory and slight still survives for many people.

Lisa: You have a new book coming out in June titled ‘Pen and Ink’ (pub Frances Lincoln). What can we expect to see in it?

James: It features around 100 drawings by 30 international artists who use pen and ink. It’s interesting how varied the works can be in this medium. The book covers pen and ink in its widest sense, and sometimes the artists combine them with other media. But there’s everything from the quick immediate drawing done on location to detailed, carefully built-up compositions in colour. As with my first book, Sketch Your World, we have included everyone from experienced, established artists and illustrators, to students who are just starting out. There are French, German and Spanish translations of Pen and Ink on the way also.

Lisa: Do you draw out and about in all weather conditions? If so, do you have any hints and tips for making this as easy as possible?

James: As with cycling, I find it easier to cope with the cold than with the rain. We spent the start of the new year in a very wet Wales, and I had some happy hours working at a deep window ledge looking out across the Brecon Beacons. A window with a view is my wet weather recommendation. But with layers of clothing, a hat and the rest, I don’t mind the cold, within reason. There are ranges of waterproof notepads aimed at mariners or anglers – perhaps they are worth trying out.

Lisa: What do you consider to be your greatest achievement as an artist and why?

James: That I still draw and paint is my greatest achievement. I’m happier when I’m drawing. A few years ago a series of prints of my London scenes went on sale in Ikea stores around the world. They were some of the smallest and cheapest things in their huge stores, but I still love the idea of some of my drawings hanging in frames in a flat at the top of a tower block in Shanghai, Moscow or Budapest or wherever. Having people see my work is an achievement.

Lisa: How important is it to you that your finished drawing resembles the idea you had before you started?

James: I don’t think it’s important to me at all. I like the idea of surprising myself with what I’ve done. The process involves responding to the drawn decisions that I’ve made in such a way that the image reaches some satisfactory conclusion, but without me necessarily knowing what that final point may have been before I started. 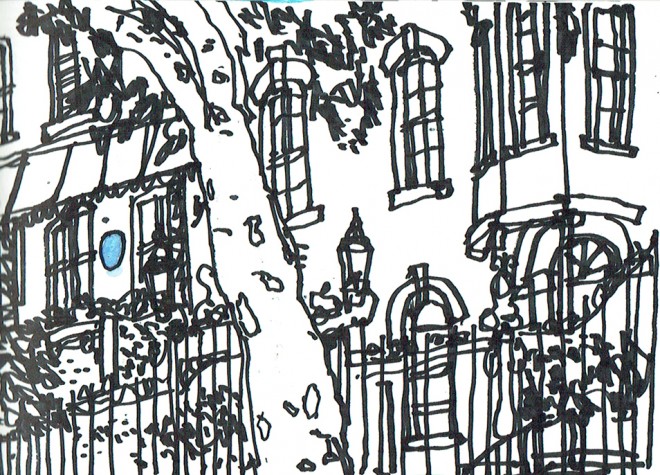 James: Ideas for a new book, planning a drawing trip to an East End wasteland, finding somewhere to exhibit my work. And filling more sketchbooks.

Lisa: You are one of the judges for the upcoming Jackson’s Open Art Prize. How important do you think it is to recognise new artwork with prizes and competitions?

James: Competitions such as this one are an excellent way for people to get their work seen, especially those without experience of being shown in a gallery. It can sometimes seem almost impossible to get your work seen by an audience, but this is a great chance to get it out there and get it noticed.

Lisa: What will you be looking for as a judge of the JOAP? What advice would you give to anyone thinking of entering the competition?

James: We’ll be looking closely at everything, and perhaps I’ll surprise myself by what I think should be selected. I’d advise people thinking of entering to go for it, and not be too bothered if they aren’t selected. That happens to all of us from time to time.

James: I have a drawing in the London Urban Sketchers exhibition at Timberyard cafe, 4 Noel Street, Soho, London W1F 8GB until 30 April 2016, and there’s a drawing by me on every takeaway latte cup from Timberyard’s chain of cafes, while stocks last. There’s more of my work on my blog, on Twitter, and on Instagram. 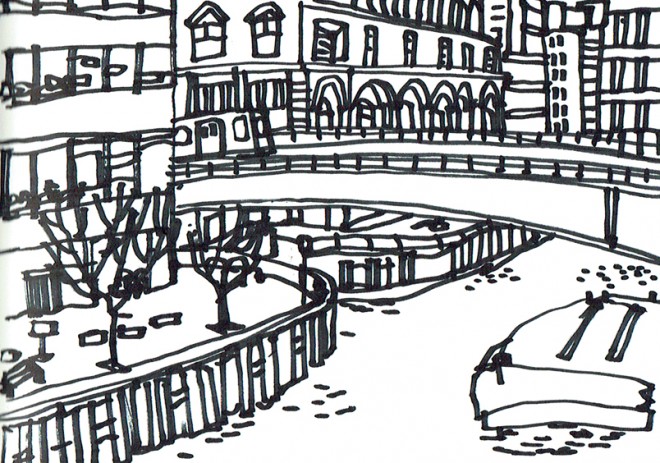