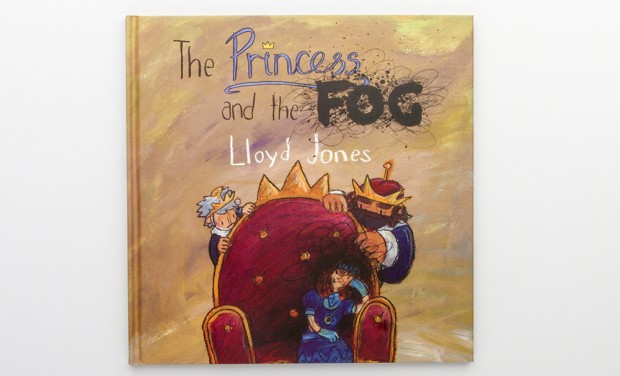 An Interview with Artist Lloyd Jones

Fusing illustration, painting and writing, emerging British artist Lloyd Jones is keen to harness the power of images for storytelling. His newly published and first book, “The Princess & The Fog”, does just that, tackling the subject of childhood depression through playful, colourful and lively multimedia artworks and an engaging story. Based in London, and one of Jackson’s very own team members, we decided to catch up with Jones at our London headquarters to get the inside story on his work, process and advice to upcoming artists. 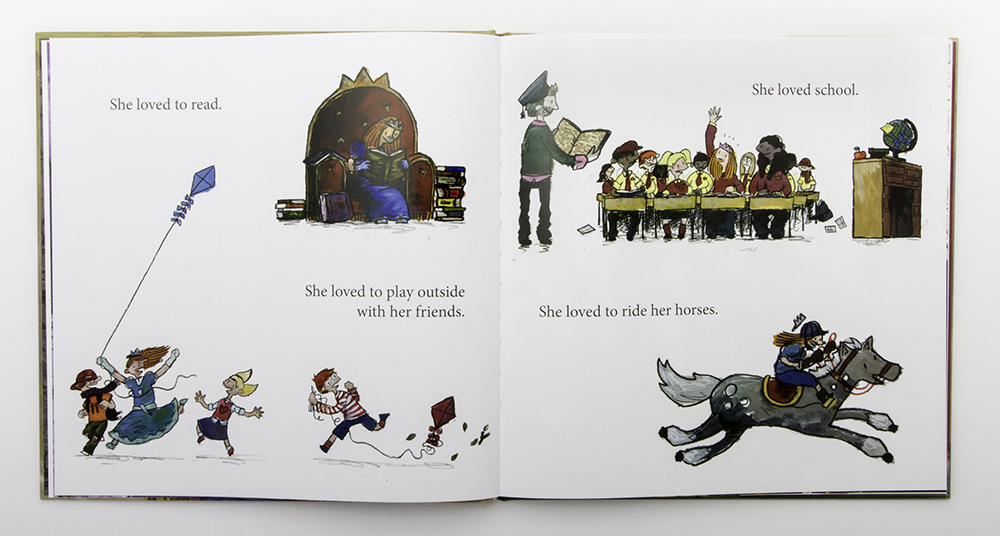 Sophie: What inspired you to pursue illustration? When did you first begin making art?

Lloyd: I’ve always been an illustrator, before I even knew the word ‘illustrator’. As a kid, I’d illustrate my favourite stories with felt tip pens on Xerox paper. I’d staple together little books and comics about the ‘Teenage Mutant Ninja Turtles’ or ‘Sonic The Hedgehog’ or whatever I was into at the time. I started painting, drawing and writing very early on and just never stopped. To be able to continue to do so as an adult is a lifelong dream come true for me. 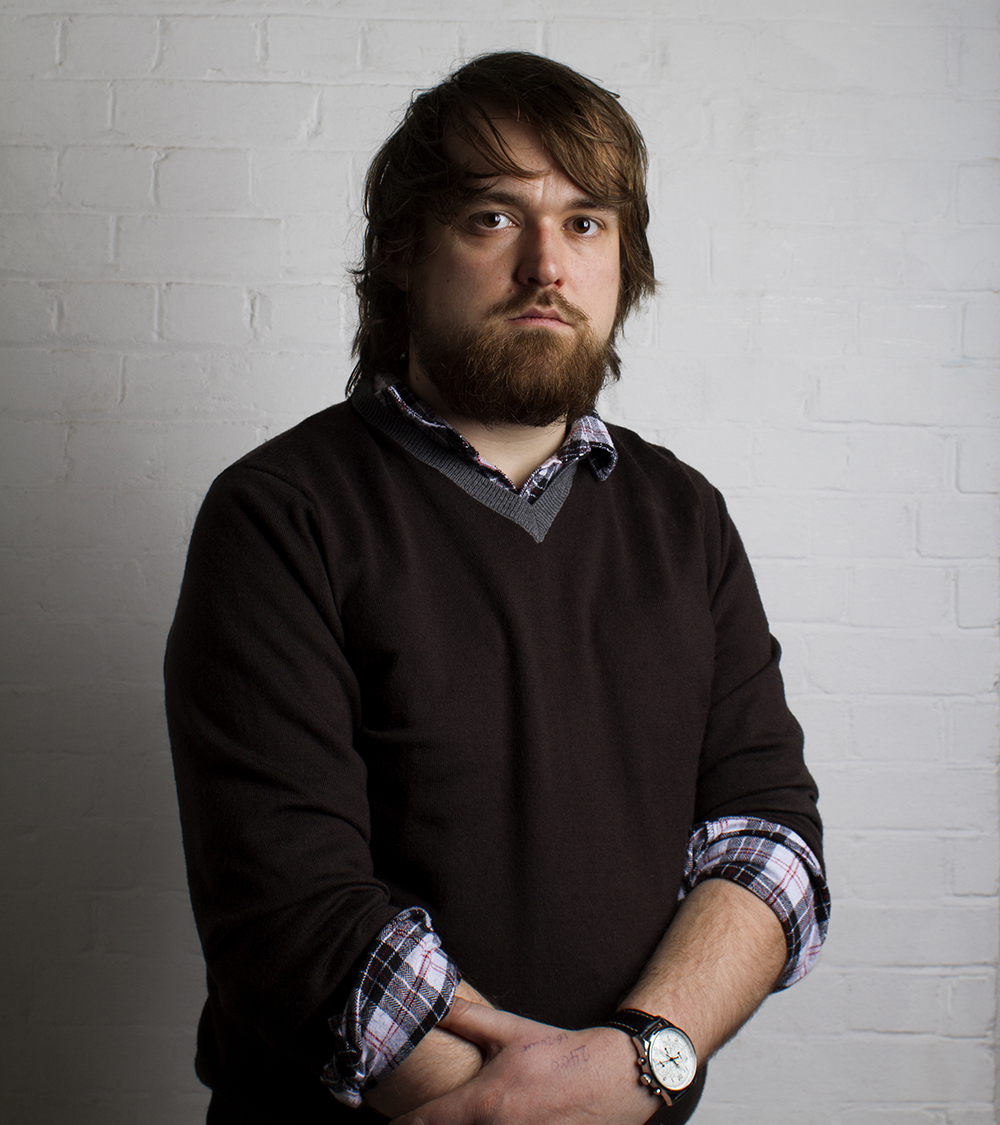 Sophie: How did the project of ‘The Princess and The Fog’ arise?

Lloyd: It started as my second year project for my MA. I studied Sequential Design and Illustration at the University of Brighton. I had been making some comics and zines around the theme of depression, which a lot of people seemed to really appreciate. ‘The Princess and the Fog’ arose when I spotted a gap in the market for children’s books around depression. Childhood depression is a concept that’s only relatively recently being accepted. When I was a child, children couldn’t be diagnosed as depressed. There are plenty of books for kids about having depressed parents, coping with death, suicide, other mental illnesses such as ADHD, what have you, but nothing that spoke to depressed children directly. I wanted to make a book that I could have really used when I was a child. 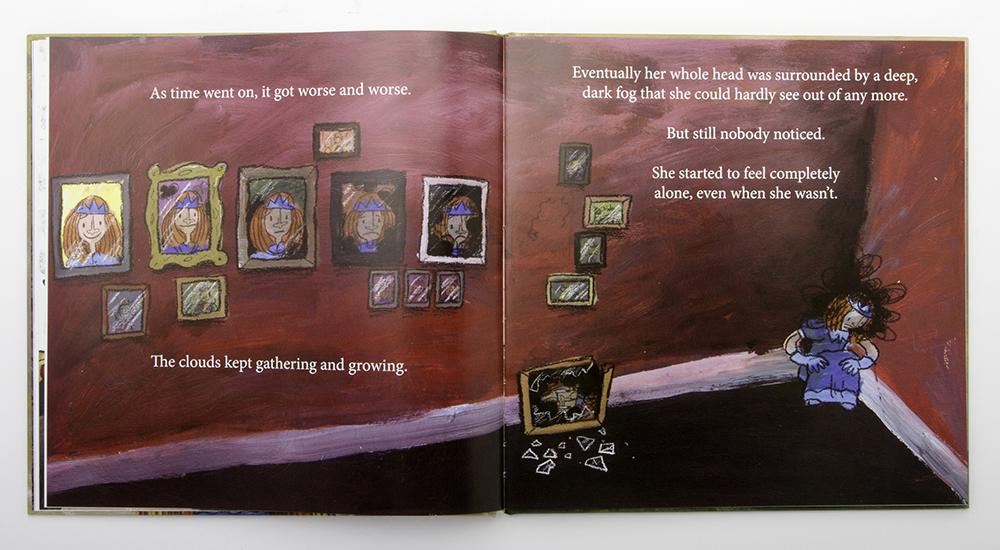 Sophie: What inspired you to treat the subject of depression for children through illustration and storytelling?

Lloyd: It’s important to speak to kids on their level. Children think and learn with metaphors and stories. They learn our language because they’re told to, but if you really want to convey an idea or a message and have it stick, you tell them a story, or you play a game. I knew children would understand a story about a princess who lives in a big castle because there are dozens of stories like that already. It’s a tried and true formula for a reason, and kids will instantly recognise it. This magical dark fog that appears out of nowhere will make as much sense to a child as an affliction like depression. Depression can be a horribly lonely and alienating thing to live with, especially if you’re a kid and you don’t yet have the faculties and knowledge to fully understand or contextualise it. I wanted the reader to feel like if it could happen to a fairy tale princess then it could really happen to anybody. 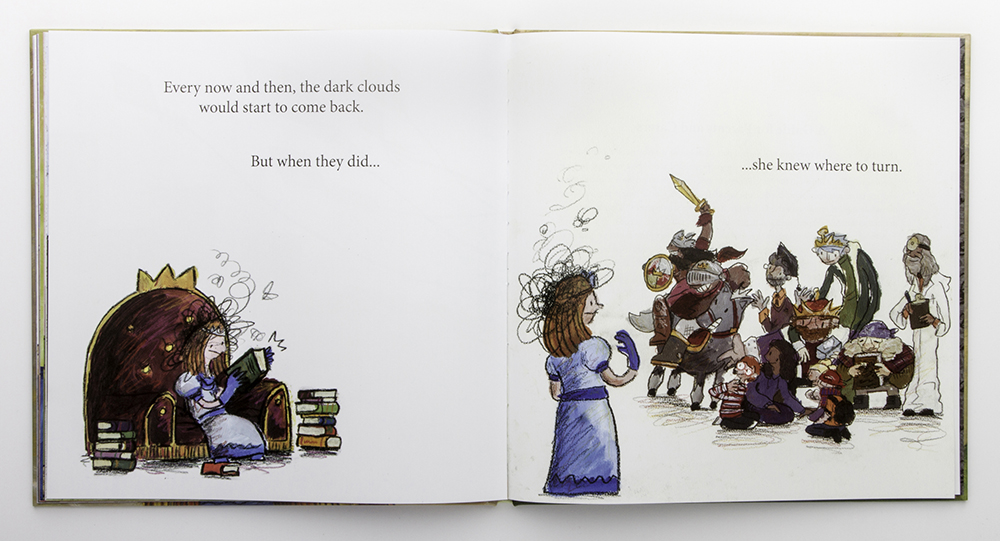 Sophie: Can you tell me about your creative process of illustrating & writing “The Princess and The Fog”?

Lloyd: I knew that however I chose to illustrate depression it had to be quite visceral. Something dark, sticky, warm and slow that just engulfs you. I’d previously chosen to depict it with a hole in the chest and a scribbled out face. I was also inspired by the likes of Matthew Johnstone’s ‘Black Dog’ series of books. A thick, dark fog seemed to cover all these bases and made for a satisfying pun in the title. I built the world and the characters, melding fairy tale tropes with real life problems and solutions. It was written and illustrated in tandem, with countless rewrites and redesigns. I made test copies and responded to people’s feedback until I felt I’d given the subject matter the respect it deserved. 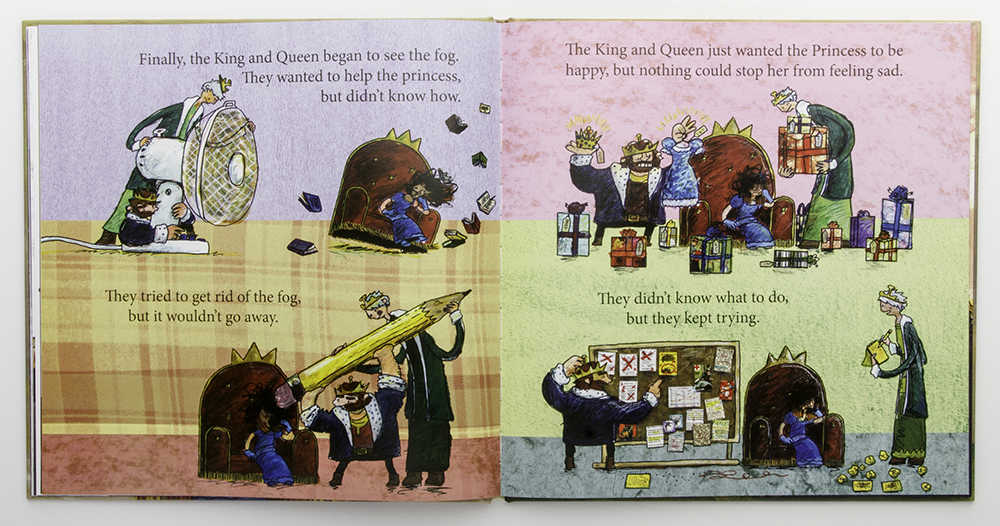 Sophie: How long did the whole process take?

Lloyd: From conception to completion, it took about a year and a half, part time, as I was a student.

Sophie: What techniques and media did you use to create the original artworks published in the book?

Lloyd: It’s a bit scattered. Characters might be outlined in crayon on one page and then marker on the next. It’s all quite messy, scribbly, a bit confusing – much like depression and a lot of other mental illnesses. I mostly used acrylic paint, pencil and crayon on collage, but there’s a TON of other stuff in there too. It also keeps the story moving and gives the reader a strong sense of time progression if nothing quite stays the same. The timeline of the book is intentionally ambiguous because everyone will fight depression their own way at their own pace: this gives the reader a sense that it’s an ongoing process. 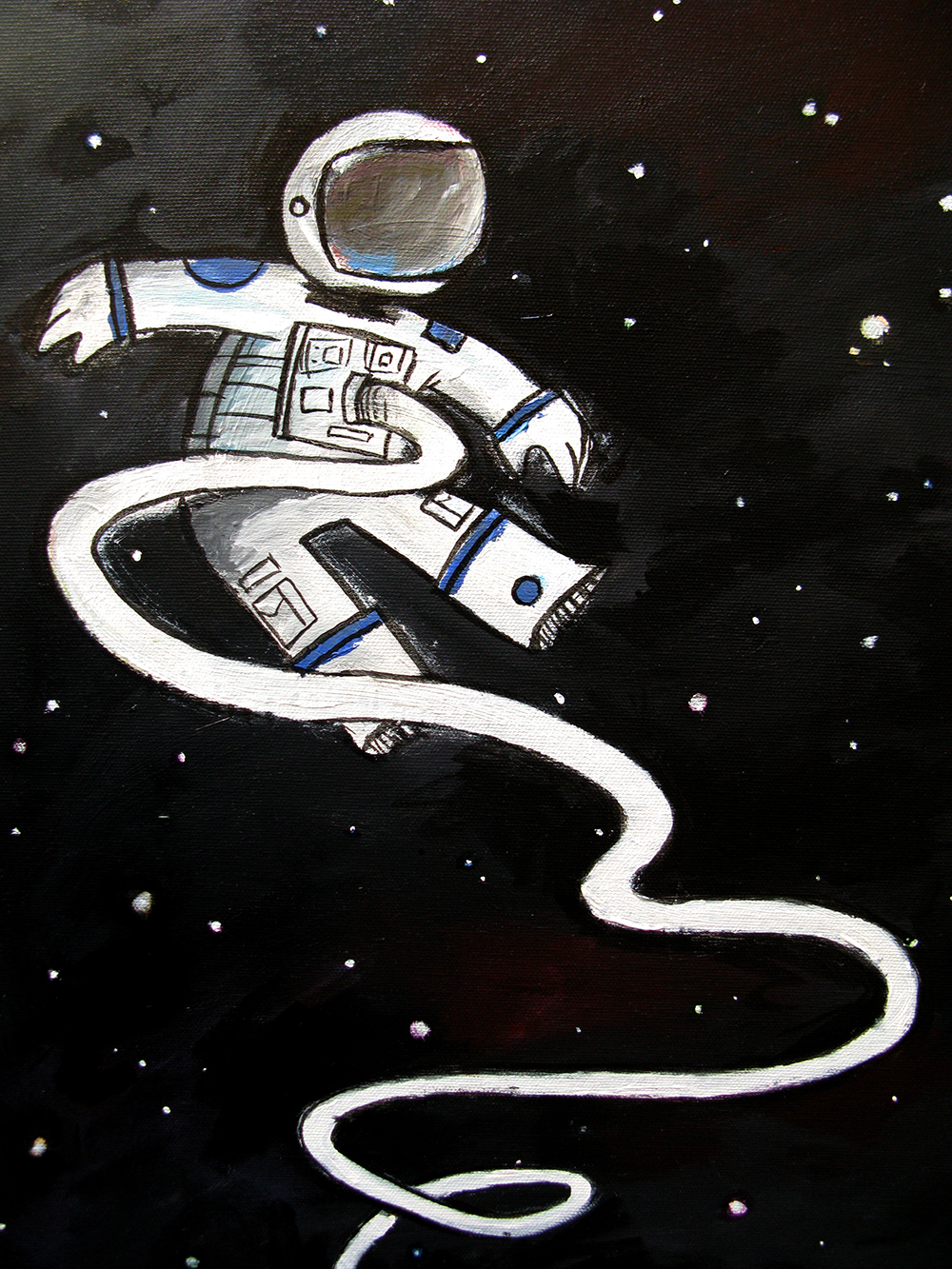 Sophie: What are some of your favourite materials to work with when illustrating? 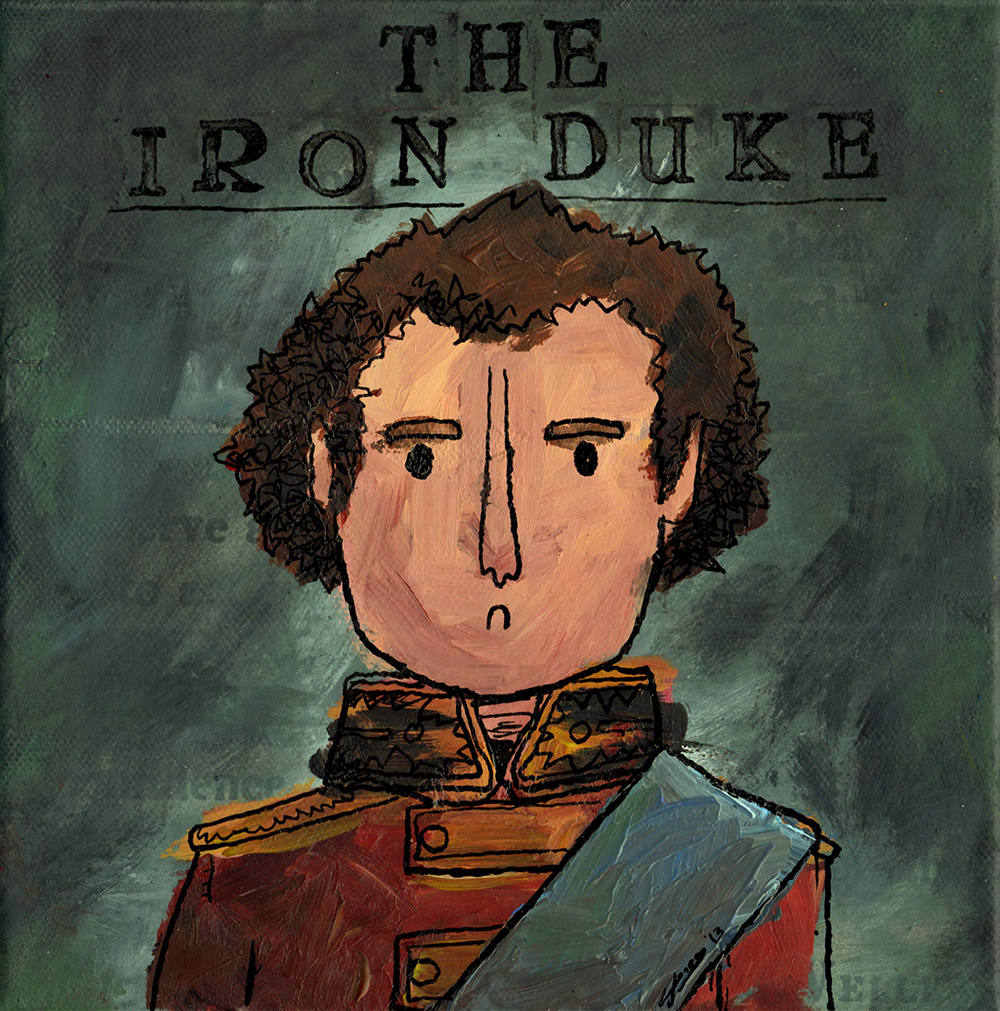 Sophie: How did you meet your publisher?

Lloyd: A peer on my MA, the fabulous Emmi Smid, wrote and illustrated a fabulous book called ‘Luna’s Red Hat’, which got picked up by mental health specialist publisher Jessica Kingsley Publishers as part of their new range of picture books. In her interview with JKP, Emmi was kind enough to mention me and my book too. We opened a dialogue and that was that. They had some ideas for edits to make the book as useful for their readers as possible, without taking away from what I wanted to achieve.

Sophie: What is your advice to artists who are looking to find a publisher and secure a book deal?

Lloyd: My advice would be persistence. I’ve tried pitching ideas to publishers, agencies and others before, and it’s really hard. You can’t let yourself get discouraged. I got really lucky in getting this book published. If you can find a publisher who deals with the topic or style of your book as a specialism of theirs, then that’s great. Cater your pitch towards the publisher as best you can. Get them interested. Tell them why they should be interested. If you can’t, move on, keep trying. It’s hard. Also, don’t expect to make much money off your first book. That’s some good advice I was given. You probably won’t want to quit your day job right away. 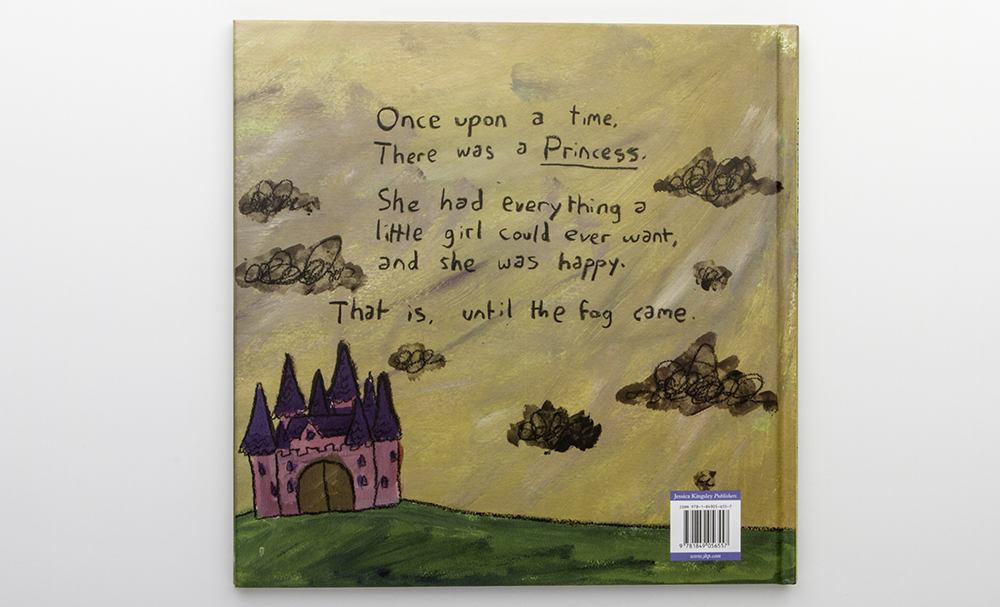 Back cover of ‘The Princess and The Fog’, written and illustrated by Lloyd Jones.
Published by Jessica Kingsley Publishers, 2015

Sophie: Can you tell me about some of your upcoming projects? Any future picture book projects in mind?

Lloyd: Yeah, man! I’ve written another book, which has nothing to do with mental health issues – it’s about a bear. I’m designing it at the moment and hoping to get it to a point where I can pitch it to publishers later this year. I have a few other things up in the air as well, such as potentially illustrating another JKP book by a different author, and some animation work. Other than that, I’m always working on dumb comics for my blogs or paintings for my Etsy shop, and all sorts of stuff is coming up all the time. Try and stop me. You can’t.

‘The Princess and The Fog’ written and illustrated by Lloyd Jones is published by Jessica Kingsley Publishers.

Check out more of Lloyd Jones’ work at: www.lloydjonesillustration.com

The image at the top is: Front Cover from ‘The Princess and The Fog’, written by Lloyd Jones.
Published by Jessica Kingsley Publishers, 2015