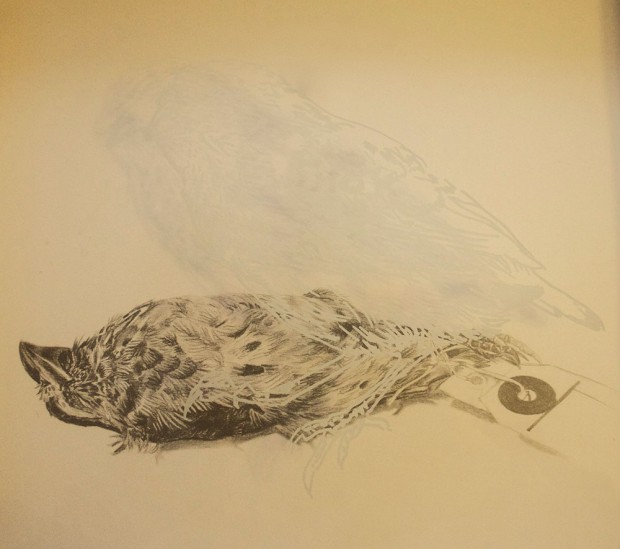 180 years ago Charles Darwin returned from a five year voyage around the world and published ‘The Voyage of the Beagle’. For this exhibition 12 artists have made work with ideas related to science, discovery, imaginative thought and the Victorian world.

In 1831 22-year old geology graduate Charles Darwin was invited to be the resident naturalist on an expedition aboard HMS Beagle. The main purpose of the voyage was to carry out detailed hydrographic surveys (of the geology of the seabed to obtain information for maritime navigation and marine construction) around the coasts of the southern part of South America. In 1836, after five years at sea instead of the originally planned two years, the ship returned by way of Tahiti and Australia after having circumnavigated the Earth. Darwin spent most of his time on land studying nature and interacting with the locals and kept a detailed journal of the expedition that became a popular travel book of the time: ‘The Voyage of the Beagle’. The book is a mixture of a travel memoir and a detailed scientific field journal covering biology, geology, and anthropology and you can see some of Darwin’s early thinking on the subject of natural selection that he would later become best-known for.

On the 180th anniversary of the return of the Beagle to the UK, twelve contemporary artists have created an exhibition celebrating the voyage, the man, his journal and his ideas. The exhibition is taking place at the beautiful Espacio Gallery in East London, with two floors of light-filled space, 3rd – 15th May 2016. 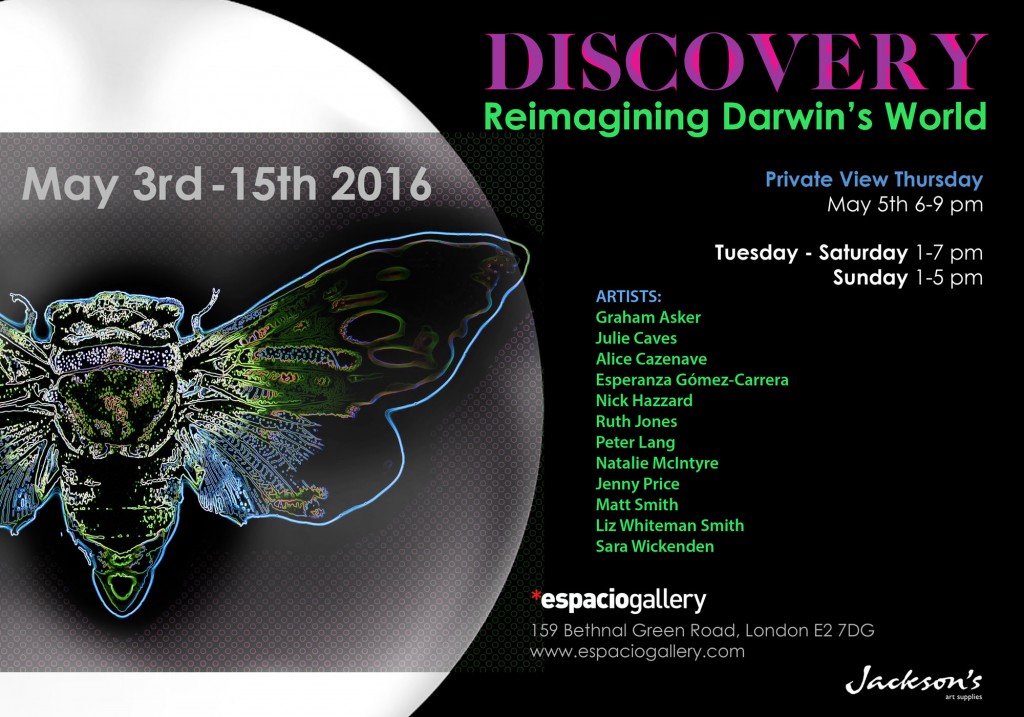 The group of artists have worked together before producing such exhibitions as: Artists in Wonderland, About Brick Lane, and Quantum: a journey through the Standard Model. Their approach is to develop their work around an event or topic, taking up to 18 months to grow the work together. The participating artists are: Graham Asker, Julie Caves, Alice Cazenave, Esperanza Gómez-Carrera, Nick Hazzard, Ruth Jones, Peter Lang, Natalie McIntyre, Jenny Price, Matt Smith, Liz Whiteman Smith, and Sara Wickenden. The show will be curated by Ruth Jones.

Exploration and discovery are central to the practices of the artists in this group, so they have a natural affinity for Darwin and his journey of discovery. From tiny details through to sweeping concepts, each artist interprets Darwin’s investigations and thoughts on the natural world. 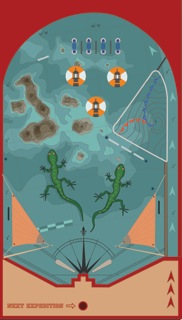 You can try Graham Asker’s addictive ‘The Voyage of the Beagle’-themed pinball machine and battle against the elements as you travel around the world. The game represents Darwin’s journey, aboard the Beagle sailing ship, to the Galapagos Islands in the 1830’s.

For years I have been visiting a 185-acre patch of woodland and grassland with a number of ponds near my home in East London that most people call Hollow Ponds. For this project I changed my casual approach to one of observing as a naturalist every detail in an attempt to understand it better. Throughout the seasons I have been seen in every part of the area with camera, easel, sketchbook, video camera, collecting boxes, or lichen charts and always with my notebook. I researched old maps and photos and talked to people about the area. I have carried out an intensive observation in a methodical manner of discovery similar to that which Darwin employed on his journey. I have created paintings, drawings, and a book all of which reflect my discoveries. 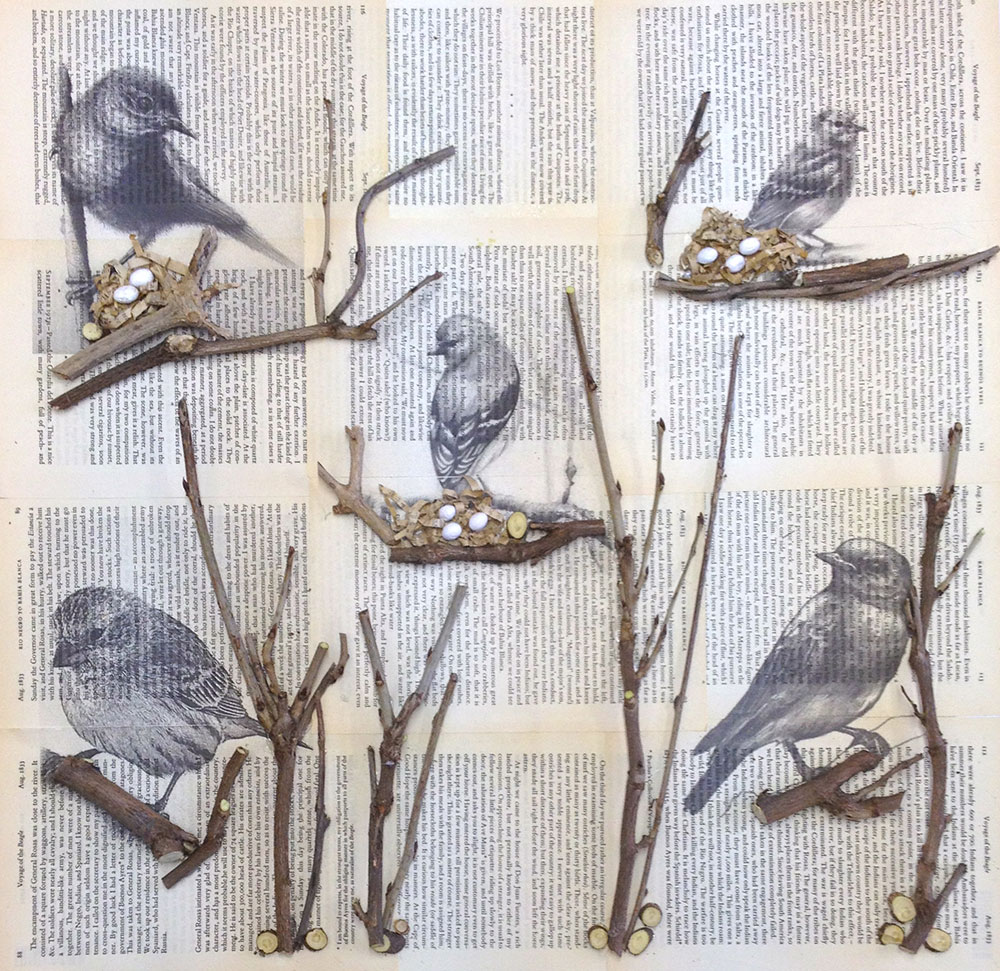 Darwin wanted to collect everything he saw, specimens and data piled up incessantly in the Beagle. Later Darwin would say that his mind was stuck in ‘a hurricane of joy and wonder’. It is in that hurricane of his mind where Esperanza Gómez-Carrera is focused, creating the work presented in this exhibition. She asked herself the questions: What was going on in his mind? What happened in that jungle that grew under deck? What were his emotions in that small cabin? What were his dreams when at night he slept in his hammock hung above the table? 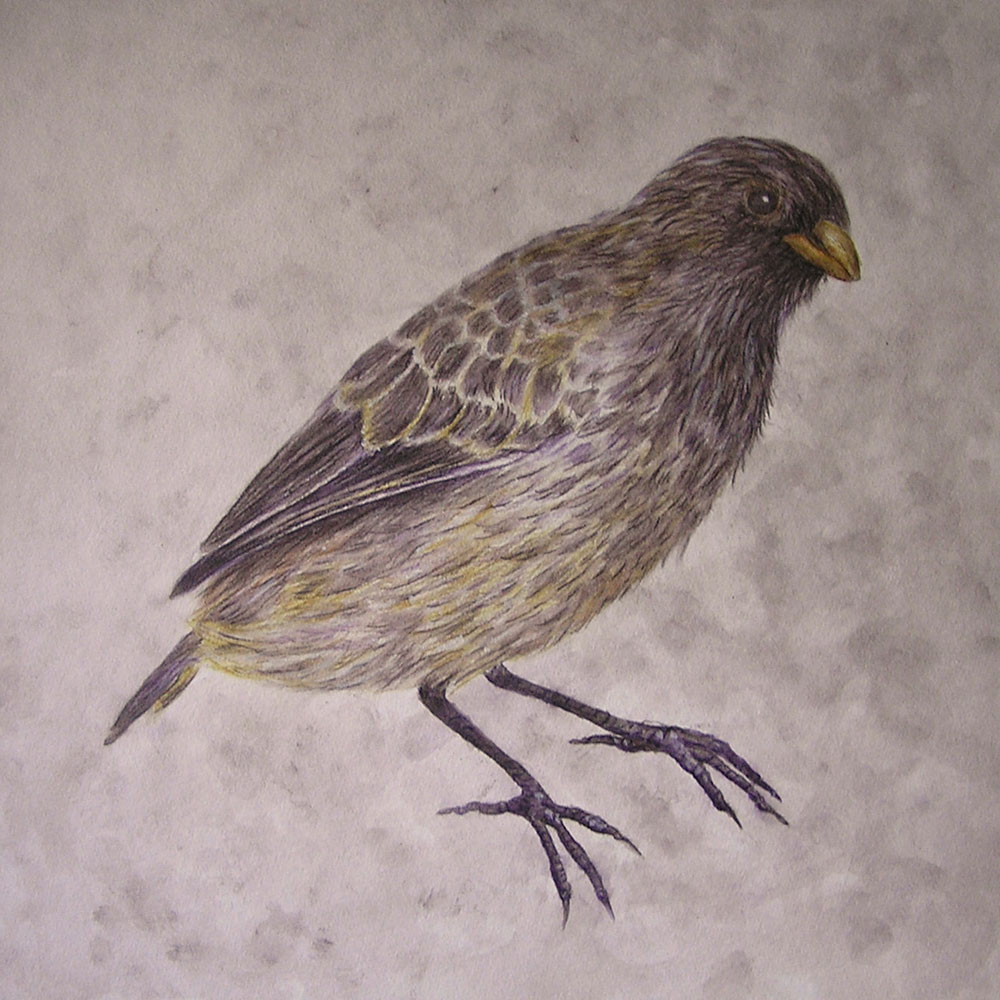 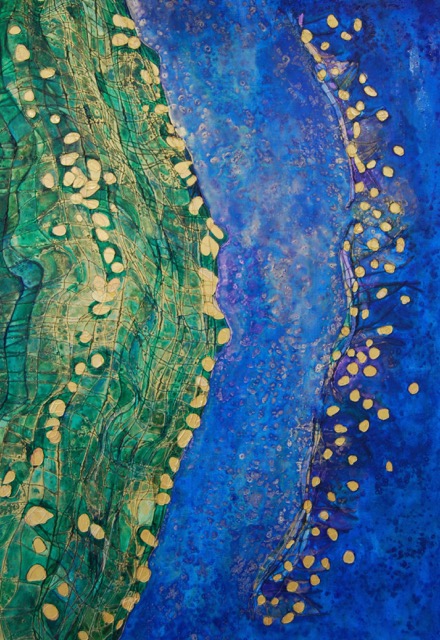 Jenny Price has imagined how Darwin might have experienced sailing to completely new and strange lands, coming across different flora and fauna, bright colours and searing heat. The series is titled ‘Landfall’ and represents Darwin’s first glimpse of the territories of South America, the Galapagos and Australia. 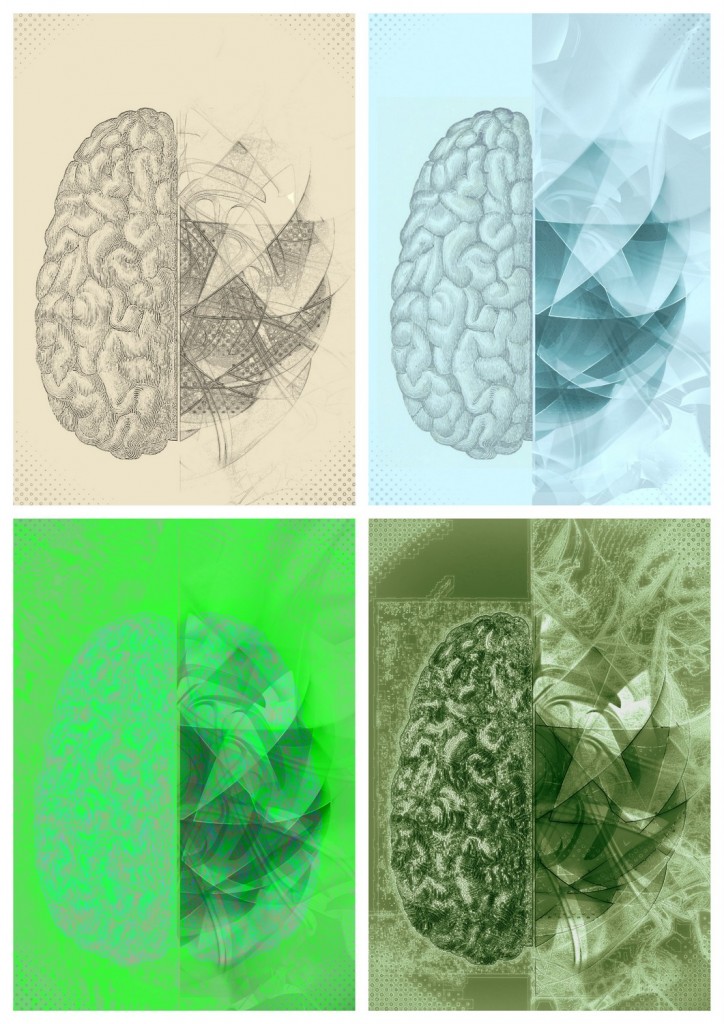 Matt Smith’s fascination with Darwin’s work has led him to consider the theme of evolution as a process. Art, design, evolution, are all processes. Where are the similarities, and what are the differences? “Fortunate happenstance” often plays a role in design and art- when we are in the pursuit of one thing, we may discover something unexpected, sometimes an improvement. Matt Smith explores the process of evolution through contemplating Homo Sapiens 2.0 as we adapt and use technology to improve ourselves. Using 3D printing he imagines our potential upgrade. 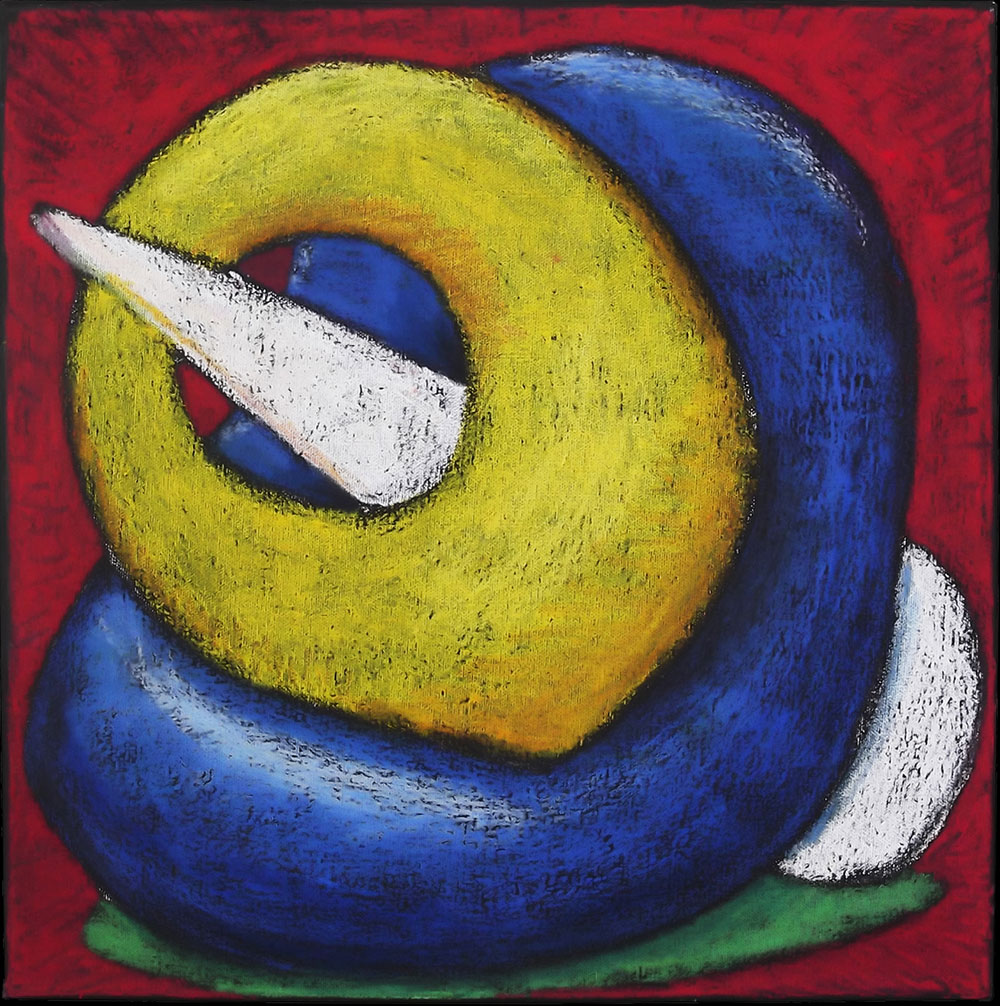 Evolution of the Big Bang
by Peter Lang

Peter Lang, inspired by the concept of evolution, investigates the evolution of abstract thought as it applies to subjects such as the Big Bang theory in his colourful abstract paintings. “As an ever evolving artist,” says Peter Lang, “I find the theme fascinating. My initial approach to the subject was to play with the idea of everyday, modern, household objects evolving to their present state and beyond. I progressed to the evolution of thoughts, beliefs and concepts. In Art terms I became preoccupied with the evolution of abstract thought. I find representing figuratively something which is essentially an abstractly fictitious idea intriguing.” 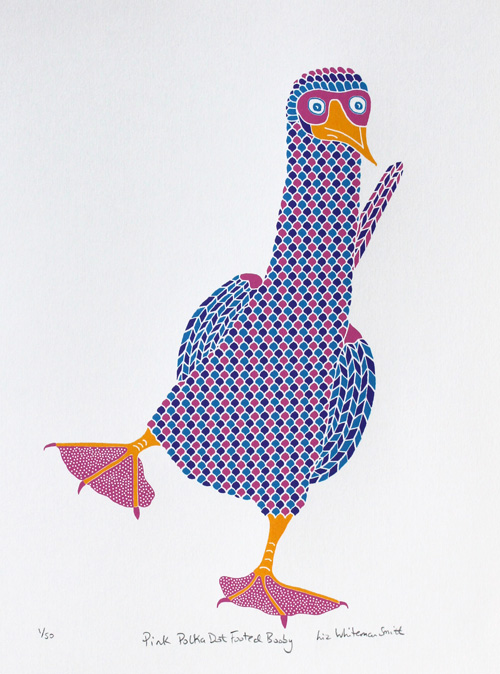 Charles Darwin developed his theory of natural selection and evolution during his voyage on the Beagle to the Galapagos Islands. He formulated that ‘species that changed and adapted to their environment would be the ones that survived’. The Galapagos Islands are home to many unusual species; one such are the blue footed boobies, comical birds that perform a special mating dance with their bright blue feet. The males with the brightest feet are the healthiest and the ones that will attract mates more easily. The male foot brightness changes quickly according to the state of his health. The colour comes from the carotenoids in the fish they eat. Since evolution is a continuous process, Liz Whiteman-Smith has explored how the boobies might evolve to become brighter and more attractive; trying to fit in with the fashions of our modern world. Using screen printing, she has created pink polka dot, tweed, red heart and floral footed boobies. 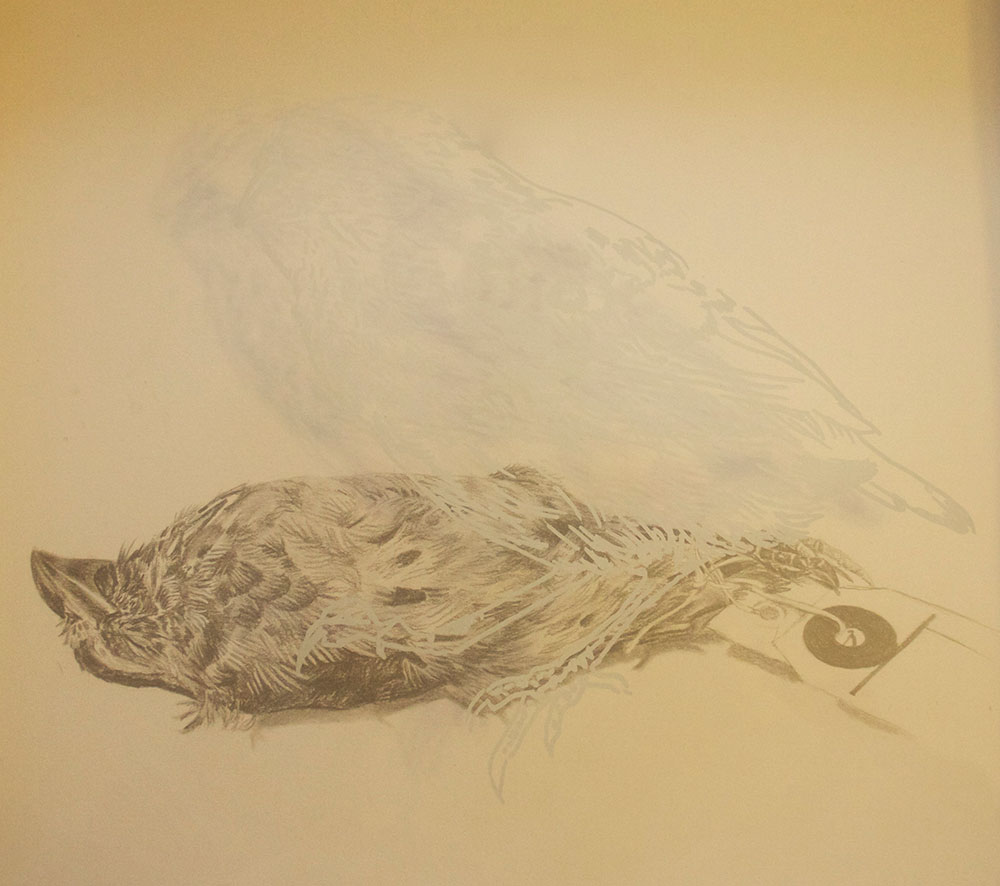 Ruth Jones explains: “In looking at Darwin’s notes from the Voyage of the Beagle I was drawn to an incident that occurred at St Pauls Rocks, off the coast of Brazil, when the expedition discovered a species of bird “…so tame you could walk up to them and hit them with a stick.” This manner of this discovery and the history of our acquisition of knowledge led me to contemplate the ramifications of our actions. It is still common practice to collect specimens of new, rare or endangered species to verify and prove their existence. The most accepted method of collection involves the killing of that animal. At what point does the animal exist? When it is dead it has been proved to exist. Paradoxically this means that specific animal ceases to exist. But when it is unidentified and alive, it doesn’t technically exist yet.”

Ruth Jones considers the meaning and practice of discovery in her work, Existential Paradox, which highlights the nature and the dilemma of existence in a scientific context. 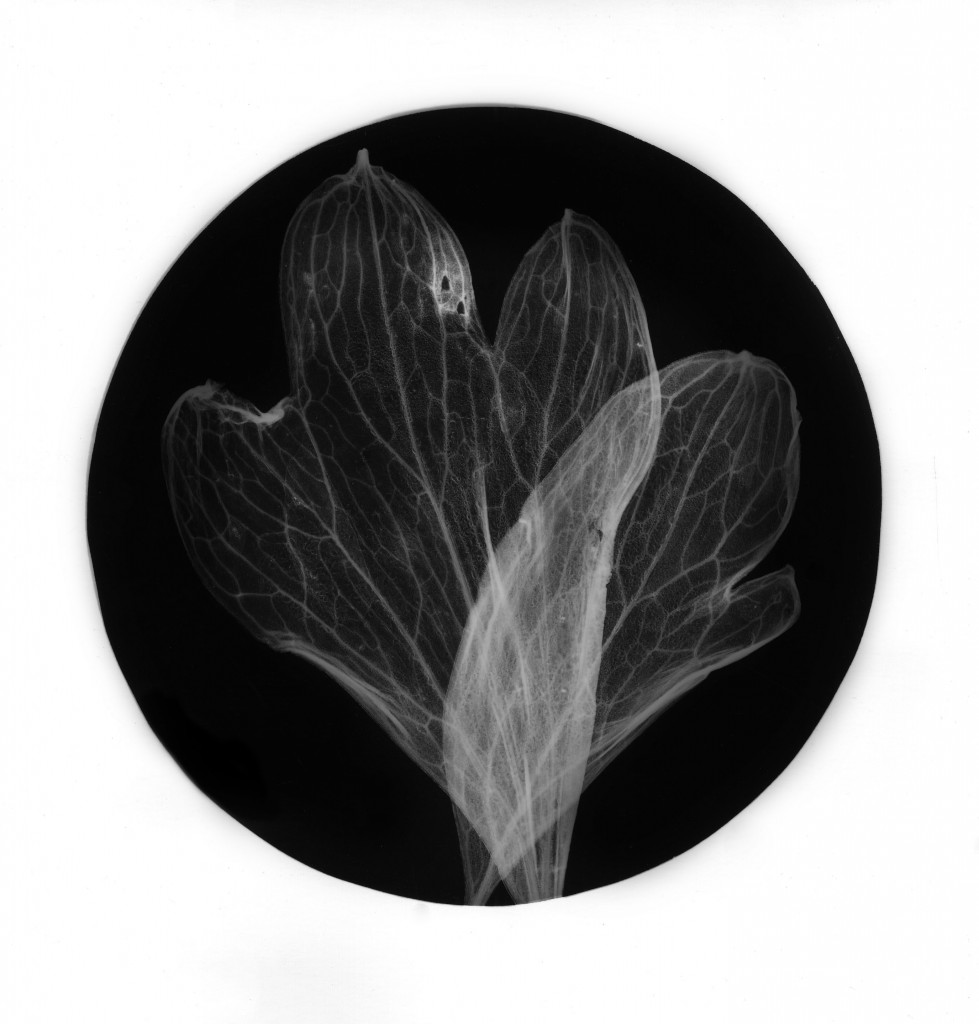 Alice Cazenave, who has a background in molecular science, uses camera-less photographic techniques to reveal some of the intricate details of the natural world. She says: “My practice is focused around experimental and camera-less analogue photography. I work to merge and revise existing divergent techniques, to develop new alternative processes in photography. Camera-less photography appeals to me because the image created is a direct consequence of an interaction between light and object. There is an honesty to making photographs this way: undiluted by lenses or screen manipulation. Digitalisation allows photography to be everywhere and nowhere in the same instance; my interpretation of photography celebrates the material photograph as a unique, immutable, non-reproducible object.” 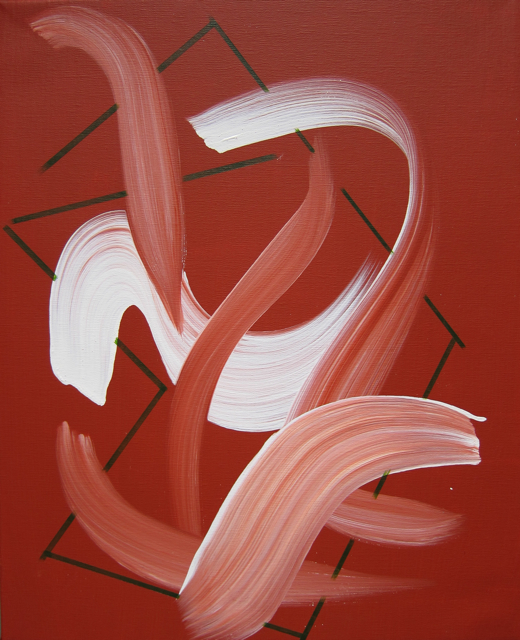 Nick Hazzard explores some of Darwin’s ideas that gradually emerge in his abstract paintings with glimpses of images lying behind the swathes of gestural colours. Nick Hazzard explains: “Darwin’s ideas and theories were not only the result of his famous voyage, but of years spent observing, questioning and investigating. They emerged gradually, appearing through the fog and haze of uncertainty. And that’s how I’ve treated what I’ve learned about him. In my paintings the images and ideas are alluded to. They’re glimpsed beneath gestural brushwork and swathes of colour, waiting to be discovered. Like Darwinism these works have evolved through transformation, modification and revision.” 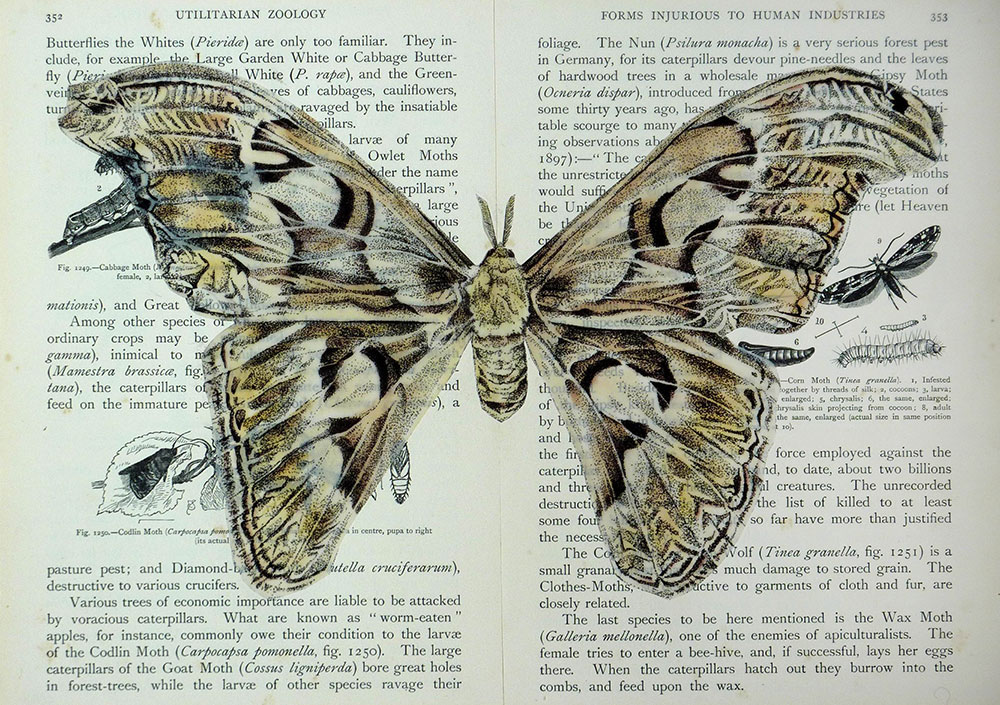 Using traditional illustrative techniques Natalie McIntyre’s work for this exhibition includes enlarged, accurate portraits of insects that draw the viewer in to appreciate their beauty.
Natalie says: “My work is mainly concerned with the symbolic and aesthetic value of insects. They have limitless diversity in terms of their shape, colour and texture and when studying their physiognomy at close range, they can appear both monstrous and beautiful. To execute these studies I am employing the traditions of natural history illustration and the scientific illustration of insects. I am also interested in a wider range of zoological specimens and I am fascinated with the way in which museums classify and display their zoological finds.”

In addition to the artwork reflecting each artist’s interests, the artists have also each produced a single piece of work based on the Galapagos Ground Finch and these can be seen collectively on the landing between the lower and the ground floor. As with other Espacio Gallery exhibitions, the artists are actively involved and you will be able to discuss the works with several present at the gallery each day.

Earlier this year we visited Raqib Shaw in his Sou

A closer look at the process behind making the Lim

Da Vinci Maestro 2 is a long-handled range made us

Da Vinci Casaneo Watercolour brushes are made from