The colour red grabs your attention; it fascinates and captivates.

Artists have a close understanding of colour and use it to great advantage – as Matisse famously said: “A thimble full of red is redder than a bucketful.” The 18 colourist artists in the exhibition celebrate the many ways to see the colour red. Red can boost your energy, it exudes confidence and is life-affirming, so this show is a great place to visit in the middle of a dreary London winter.

Organiser Sally Grumbridge, who has organised exhibitions themed around colour before, says: “I hope the exhibition will show how colour can inspire artists and help them communicate. The Espacio Gallery walls will be alive with vibrant, exciting work in all hues of red. The show should appeal to people who love colour, people who are interested in the meaning of colour and people who wish to be cheered up on a grey February afternoon!”

John Adams, who studied art in Glasgow and London, is showing a series of prints (etching and screenprinting) representing the experience of an urban walk, from Euston to Holborn, through a number of London squares. 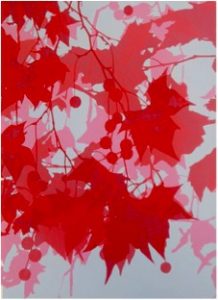 Terry Beard, who has an MA in textile design and worked as a textile designer and illustrator for 10 years, bases her abstract paintings in acrylic and collage on ideas of the landscape. 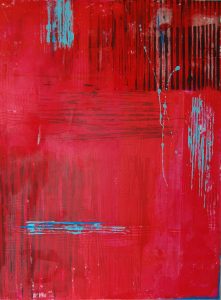 Tania Beaumont, who studied at Liverpool College of Art and Goldsmiths College, is a painter-printmaker making what she calls ‘monotype papercuts’ inspired by her local environment. 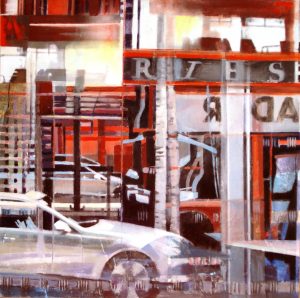 Liz Brown, who studied at Cambridge College of Arts and Technology and has an MA in Photography from De Montfort University, will photograph people’s ‘Red Shoes’ at the exhibition and is showing large framed digital images of Icelandic Poppies and other red flowers. 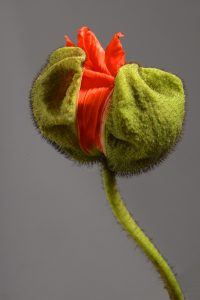 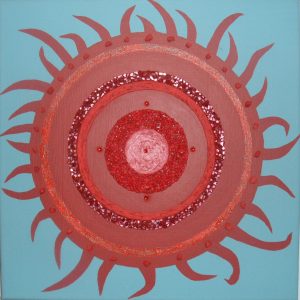 Christine Calow studied at Cambridge School of Art where she received the annual Printmaking Travel Award and Loughborough College of Art and Design where she received a degree in Printed Textiles. Using screenprints and paper collage, her work is inspired by her travels to India, in particular the vibrant desert state of Rajasthan, where red is considered a very auspicious colour. 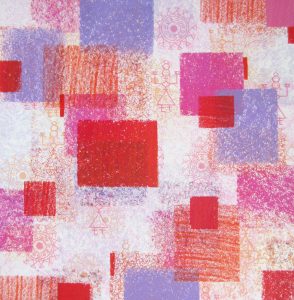 Laurence Cammas has been painting and making jewellery for 15 years in Asia and the Far East, and has recently moved to London. She makes large oil paintings with figurative themes in which the colour red is very important for its energy and vibrancy, as well as its Eastern symbolism of good fortune. 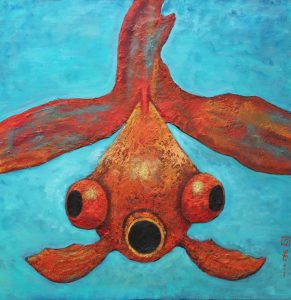 Julie Caves, who studied at the University of Texas at Austin, and received an MA from Camberwell College of Art, has been showing paintings, prints and artists’ books for over 20 years in the UK, Europe, the US and Mexico. Her large Colour Field paintings, small abstract paintings and domestic-sized nighttime seascapes are a result of her interest in surface, colour, ambiguity and oppositions. 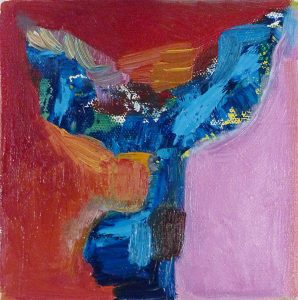 Bozena Czyz studied architecture and has been painting for over 20 years. Her large expressive, abstract oil and acrylic paintings on panel seek to create dramatic impressions through strong contrast, a dense mass of paint and rich variety of textures. 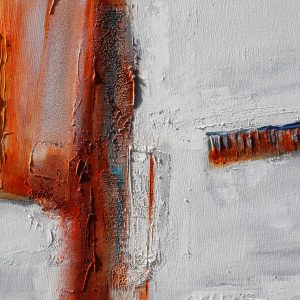 Kanwal Dhaliwal has been a practicing painter and sculptor for over 30 years since he graduated in Fine Arts, and he has exhibited in India, France and UK. His figure paintings use red to signify revolution, labour movements and bloody conflicts in his work about the history of India. 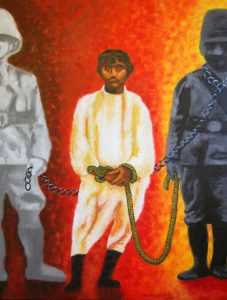 Zelda Eady trained as a printmaker at the Curwen Print Study Centre Cambridge and makes mixed medium paintings and linoprints inspired by the landscape around her home in rural Norfolk. 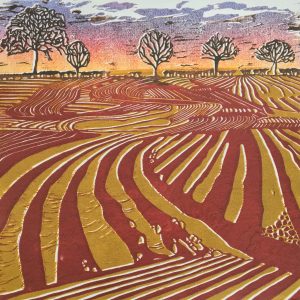 Laura Gompertz studied Theatre Design at Nottingham Trent University and runs her own interior design practice. Her bold, colourful oil paintings of food, especially fruit and vegetables, are inspired by the abstract shapes and colour in natural objects and commonplace things such as figs, pomegranates, rocks or ice. 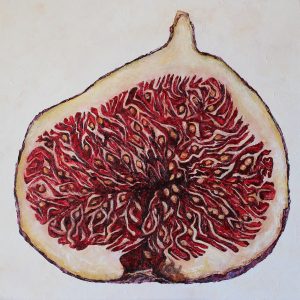 Raina Goran, who graduated in Illustration from Wimbledon School of Art, is showing small oil paintings that evoke the warmth and energy of the landscape of Tuscany and Spain. 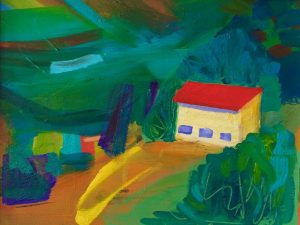 Sally Grumbridge studied Public Art at Roehampton University and Experimental Printmaking at London College of Communications, University of the the Arts London. Her series of oil and collage paintings tells the story of her father’s experiences as a Prisoner of War in Thailand during World War II. The colour red runs through the body of work, referencing the Japanese flag. The narrative that accompanies the work is available to read on her website. 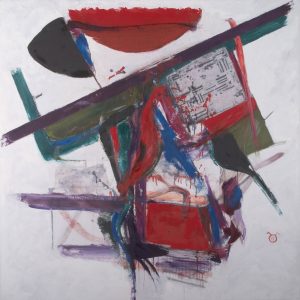 Sally Grumbridge, ‘The Bombing of Nong Pladuk’
oil on canvas with collage, 100x100cm

Philip Leevers, who is a painting school graduate of the Royal College of Art, paints his local woodland using oils and collage. 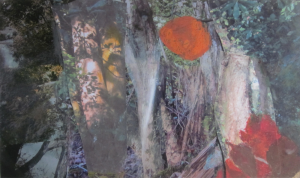 Laura New, who studied at Central Saint Martins and Middlesex University, makes line drawings in ink on wood panel that centre on ideas of the natural world. 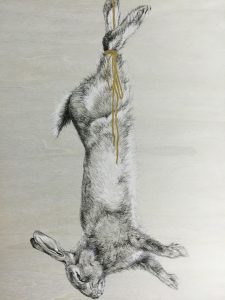 Laura New, ‘One String Too Many’
pencil, ink, chalk and gold paint on wood panel

Tina Viljoen studied at Byam Shaw, University of the Arts. London, where she worked in encaustic (wax) painting. Her large-scale oil painting triptych, ‘Darwin and the End of Species’, depicts Darwin seated in an imaginary museum surrounded by the animals that went extinct from the time he wrote ‘The Origin of Species’. Red is the appropriate colour for this work as the list of endangered species is called the Red List. 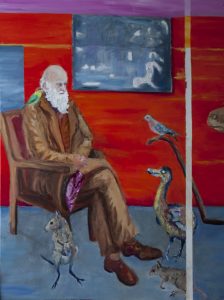 Cary Whitworth, who has been an artist and art therapist for over 20 years, is showing oil and collage paintings about the current political situation. 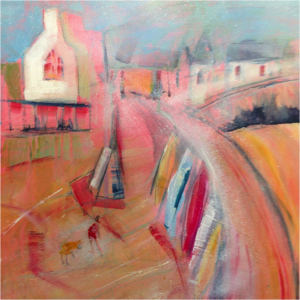 Espacio Gallery is a co-op gallery that opened in 2012 in the heart of London’s East End art scene, at the top of Brick Lane and has had nearly 200 exhibitions since then. It was founded by a group of artists working across all contemporary visual arts media who wanted a space of their own specially designed to meet their needs. Located not too far from Whitechapel Gallery, Espacio is always part of their First Thursday late-night art events.

Julie has been editor of the Jackson's Art Blog for 10 years. With an encyclopaedic knowledge of art materials (majoring in oils and acrylics), she loves researching and writing pieces for the blog as she learns something new each time. Julie is also a professional artist, a recent graduate of the Turps Studio Programme and previously studied at Camberwell.

Whether adapting to working at home instead of in

The @fabercastellglobal 9000 Graphite Pencils are

Greys are the workhorse of many artists and are us

Viarco Vintage Pencil sets provide a variety of so

The perfect tool for artists who love to draw with

Whether adapting to working at home instead of in