Like the other Daniel Smith Watercolour Grounds which are already available in Titanium White, Buff Titanium, Mars Black and Transparent, these new grounds are suitable for use on both absorbent surfaces (such as Canvas, Paper, Plaster or Hardboard) and non-absorbent surfaces (such as Glass, Plastic or Metal). For best results, hard substrates such as metal or perspex should be sanded or abraded before the ground is applied, as this will allow it to adhere to the surface more completely. The ground can be thinned up to 10% with water, and is probably best applied in two coats, though one will suffice if you are working on a large scale or are in a hurry. It should be touch-dry within the hour, but Daniel Smith advise you wait 24-72 hours to allow the ground to cure before painting on it in watercolours or acrylics.

We used two boards: a Jackson’s Handmade Linen Board (Universal Primed Rough Grain Jute I, 13x18cm), which has a rough-weave surface, and a Belle Arti Multi-Ply Poplar Wood Gesso Panel (13 x 18cm), which has a smooth surface.

Because the new colours are very suitable for floral work, I decided to paint a quick study of some sprays of Wisteria on the smooth Belle Arti panel. The gold retains some of its iridescent sheen when it is painted over, and suffuses all of the colours with a warm glow. 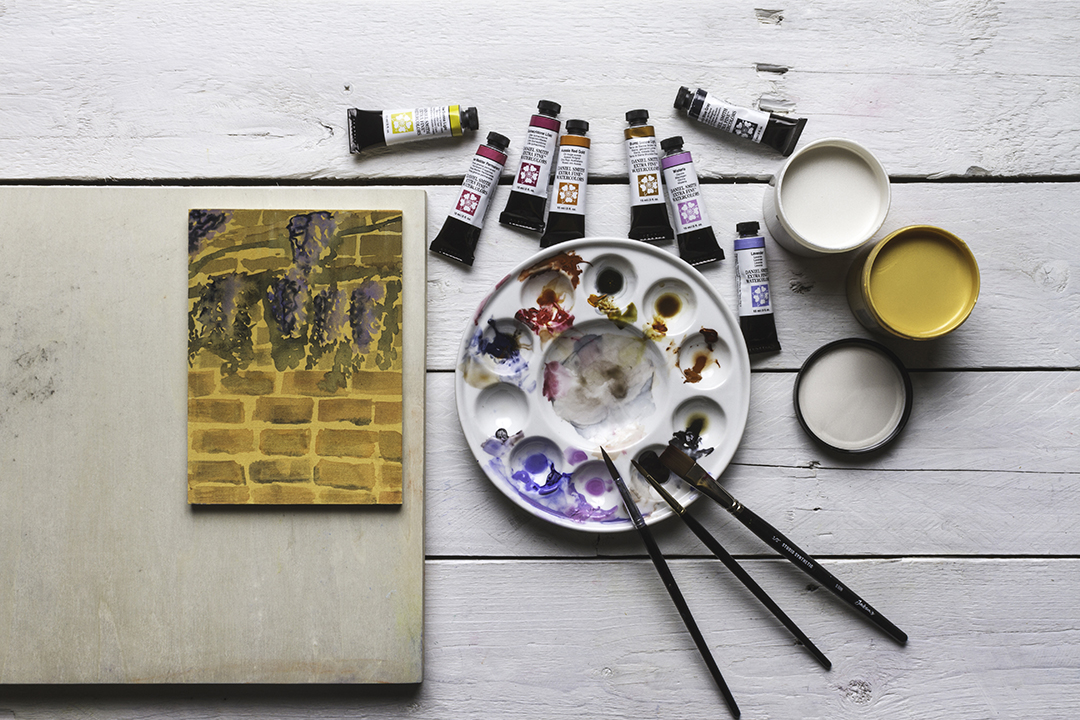 The new Daniel Smith Watercolours and Grounds as used on a Belle Arti Gesso Panel.

The rough-weave canvas surface retained some of its texture after the ground was applied, which encouraged the watercolours to pool slightly in its dimpled surface. This gave an interesting mottled effect. We used this board to test the new colours, and to see how the gold ground shone through them at different concentrations.

Payne’s Blue Grey was my favourite of the colours. It is a rich navy/slate colour which is a great darkening mixer and which is very versatile. At high concentrations, it is a cold, shadowy grey; diluted, it appears more blue. (Some people are lucky enough to have this colour in their irises.)

Wisteria looks like it will be a favourite with the many botanical artists who use Daniel Smith colours; it is a lovely non-granulating, non-staining colour which lifts easily and would be perfect for painting floral scenes. It works well alongside Lavender, a red-leaning periwinkle blue which, oddly enough, is closer to the colour of the wisteria flowers I have come across than the Daniel Smith Wisteria! There are also two variations on rose-pink: Rose Madder Permanent is a lightfast version of the traditional fugitive Madder, while Quinacridone Lilac is a slightly darker purple-toned pink. 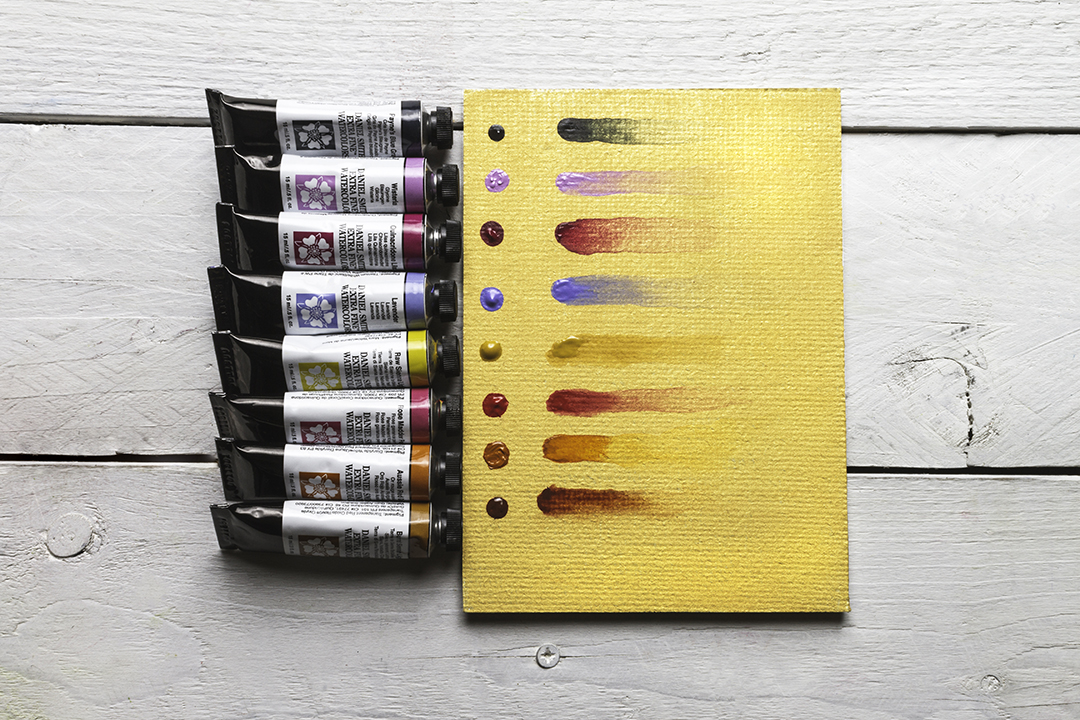 It should be noted that some of the colours were more affected than others by the gold ground, which made the Raw Sienna Light seem rather more mustard-y than it truly is; on white paper, it is a golden sunflower yellow. The photo below allows you to compare the true tone of the new colours to the tone created when they are used over a gold ground. 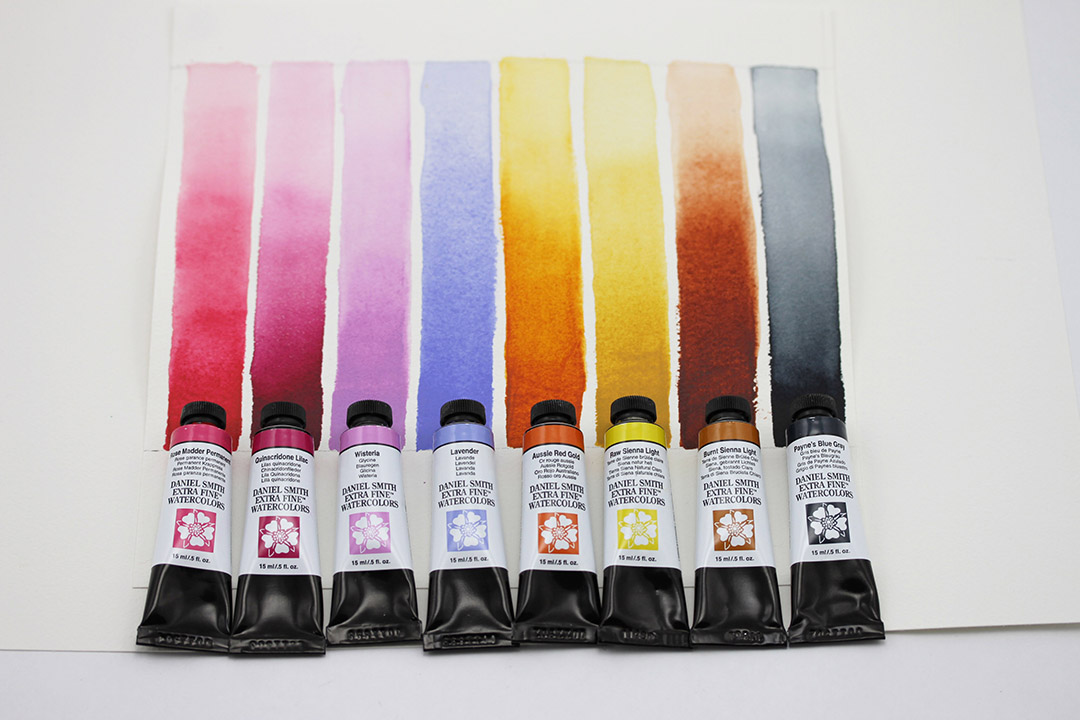 All eight of the new Daniel Smith Watercolours on white paper.

The new Daniel Smith watercolours and watercolour grounds can all be purchased at Jackson’s, alongside our Handmade Linen Boards and the Belle Arti Gesso Panels.