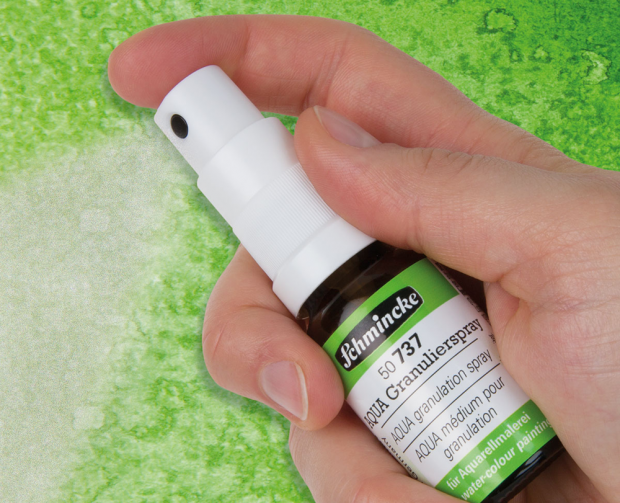 Granulation within watercolour is a specific characteristic to certain pigments whereby the pigments clump into granules on the paper when applied as a wash. This is naturally occurring with some pigments and is not a sign of low quality paint. Watercolourists can use certain colours consciously to create this granulation effect within their work, however it has until now been limited to certain colours. As part of Schmincke’s 125 Year Anniversary since the creation of Horadam Watercolours, they have introduced a Aqua Granulation Medium Spray which when applied, creates a granulating effect even for non-granulating colours! 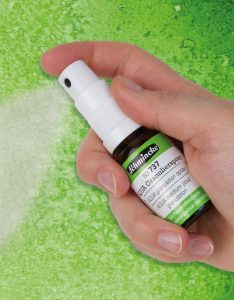 Most of the watercolours within Schmincke’s Horadam Watercolour range have an even paint flow, only 22 of the colours are naturally granulating. The Aqua Granulation Spray allows for versatility and gives greater control to the artist as when applied it will cause the granulation of colours which do not naturally granulate.

The Aqua Granulation Spray is available in a 15ml atomizer – to use it is fairly simple, just press down on the top to release the spray onto watercolour that is still wet to the areas you want to granulate. 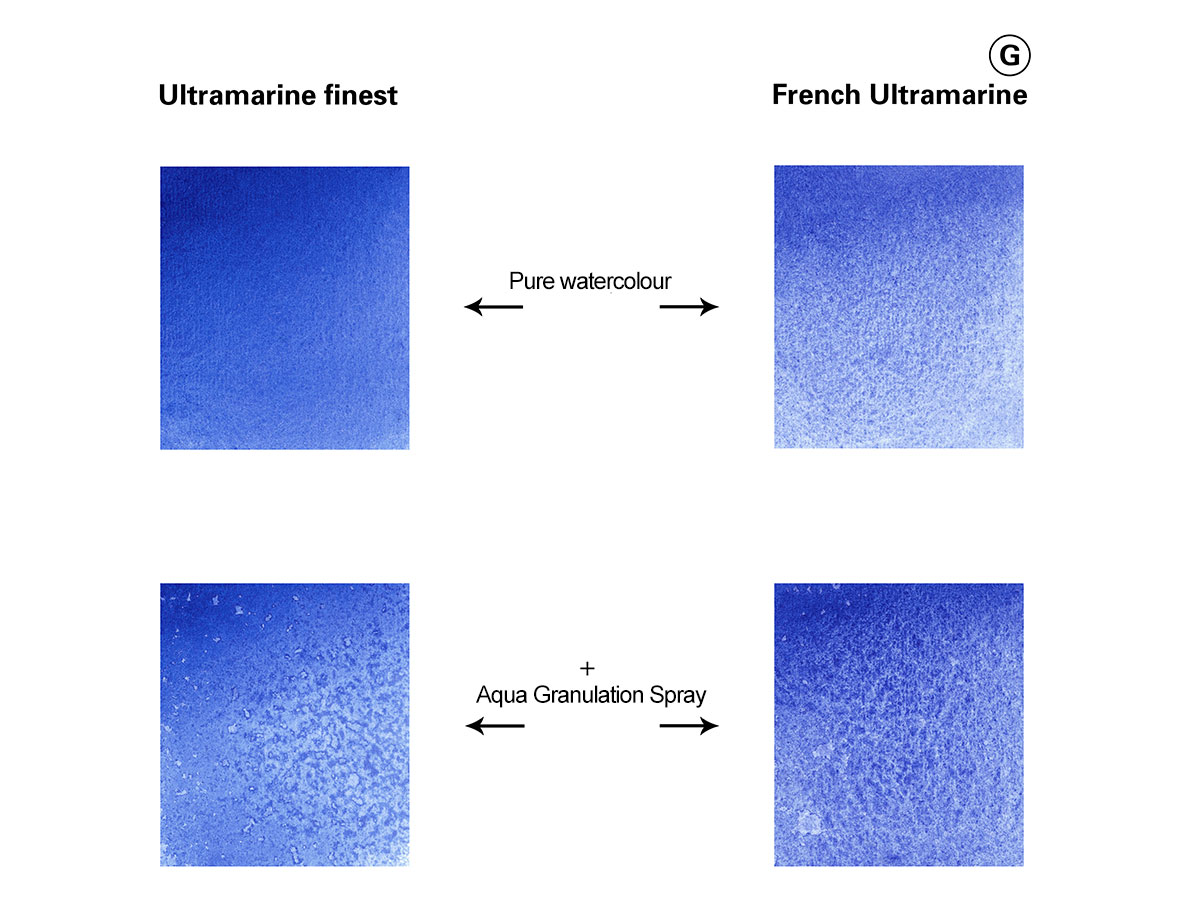 As a watercolourist I am always intrigued by mediums and products which are created to help enhance your watercolour painting by either making certain processes easier or to produce exciting effects. Granulation is not something that I look for particularly when choosing colours but having the ability to choose to make a colour granulate is something which I wanted to test out. After trying out the 35 new colours within the Schmincke Horadam range, I thought it would be a great idea to try out the granulation spray with a couple of the new colours.

Quinacridone Magenta has more of a reddish tone than Quinacridone Violet, is a semi-transparent, semi-staining colour which has good lightfastness and is made from a single pigment. This colour is non-granulating. 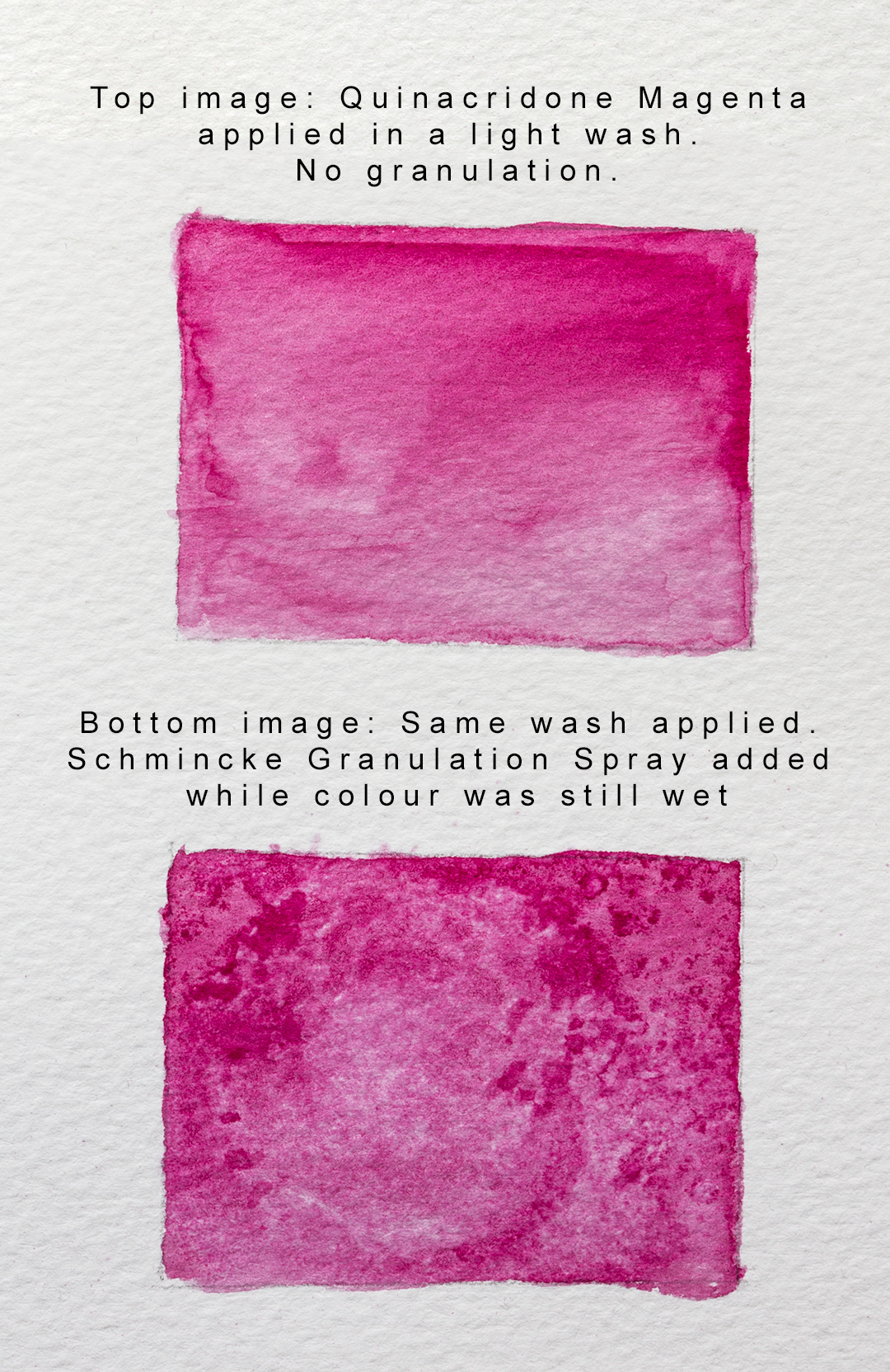 You can really see the difference between the two swatches, the bottom swatch (which had the Granulation Spray applied) has intensified the pigment and caused interesting patterns on the surface of the paper. As this was my first attempt, I may have been using the spray too close to the swatch as it has caused a circular shape to appear. The granulation has caused lighter areas also, because you have to apply the Granulation Spray when wet, the pigment disperses and concentrates in pools, causing areas to have less or more pigment. Using textured paper has also helped to intensify the granulation. 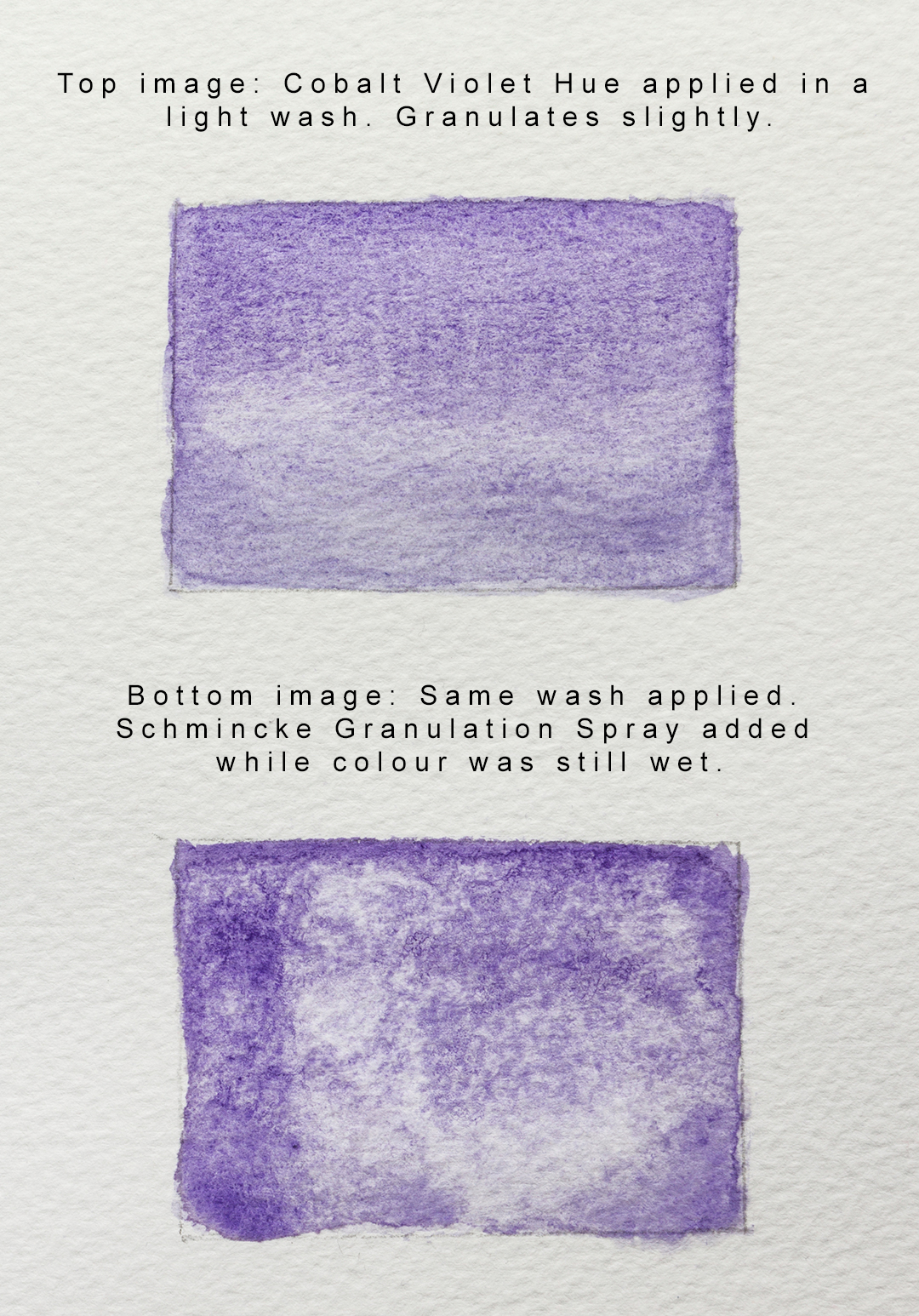 Cobalt Violet Hue is a naturally granulating colour and this can be seen in the first swatch if compared to the Quinacridone Magenta. This was a much lighter wash I applied as I wanted to see how much pigment would be lifted once the granulation spray had been applied. The effect is not as intense as with the Quinacridone Magenta in that the pigment intensified and pools of pigment formed, however a lot more of the colour has been lifted out, causing subtle variations in tone and texture.

If you would like to find out more about Schmincke’s other mediums and also the 35 new colours added to range, click on one of the links below: