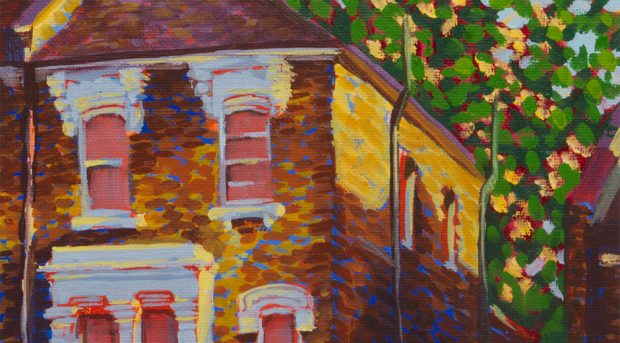 Nicholas Verrall has been working as a full time artist since 1970 and is currently a member of the Royal Society of British Artists. I reviewed his book, ‘Colour and Light in Oils’, co-written by experienced author and art journalist Robin Capon, by making a painting that tested their suggestions.

When I originally picked up this book I was concerned that I’d find restrictive diagrams and rules about light hitting architecture annotated with suggested colour use. What I actually discovered was the complete opposite – Nicholas Verrall and Robin Capon have created a catalytic book that broadly discusses the concepts of painting light and using oil paints as a colourful medium.

The book is structured quite loosely into four chapters: Understanding Oils, Capturing Colour and Light, Subject Matter and The Working Progress. Each section of writing covers the basics of painting, detailing facts and well-known theories, then divulges Nicholas Verrall’s experience of these ideas within his own painting practice. The text is written in an accessible, conversational format and supported by hundreds of images of Verrall’s work that really help to bring the concepts to life. The book deconstructs painting different types of natural light, capturing shadows and the effect of light on colour. It also dissects the subjects of paintings, investigating how to pick objects for a still life, where to situate yourself in relation to your subject, painting architecture, paintings rooms, how to frame your focal point, and much more. 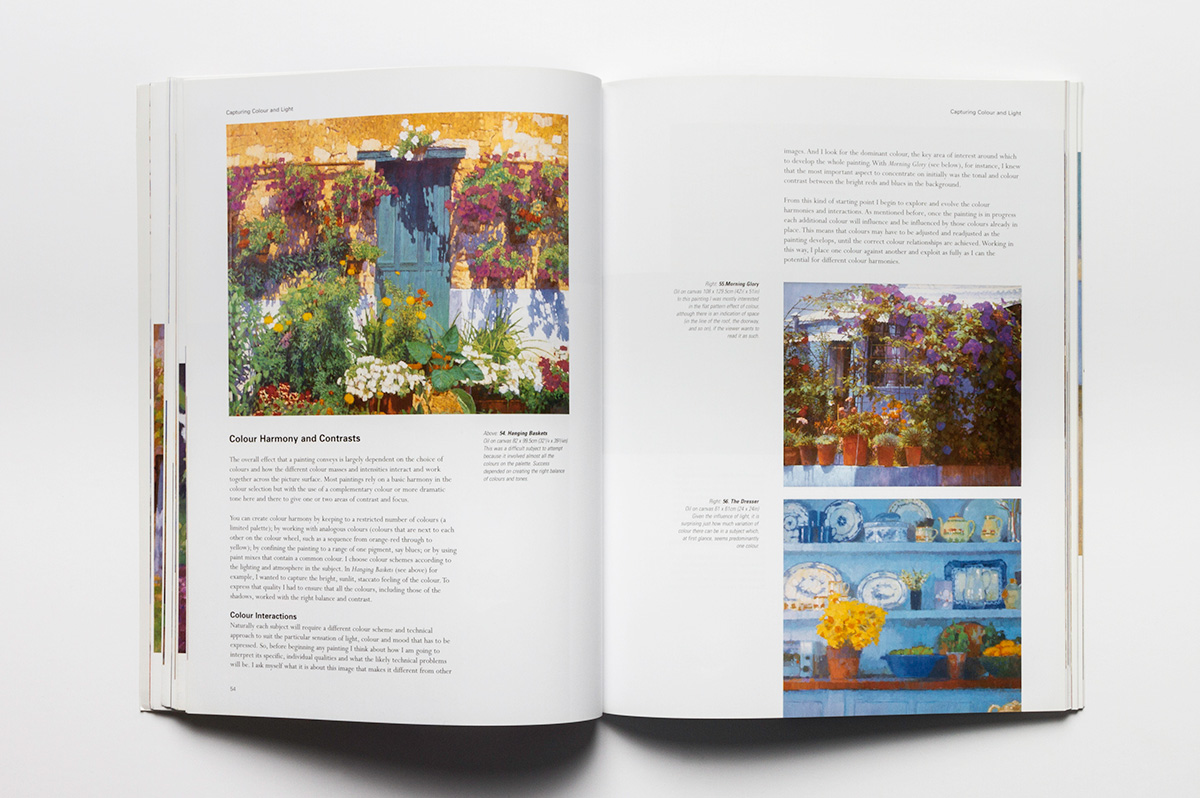 Despite discussing hundreds of popular techniques to improve elements of your painting, this book never directly instructs the reader. Instead of step-by-steps, Verrall discusses a variety of methods and techniques while talking about his painting experiences. At first I was thrown by this lack of solidity, but after testing some of the suggested techniques I found this tone allowed me to put a personal spin on the ideas. I was able to be guided by Verrall’s advice but not trapped by it – my painting became influenced, not defined, by his discussions. I was very impressed by this as I think it’s rare to find such versatile content in any ‘How To..’ style publication.

Saying this, the book is regularly punctuated with nuggets of technical information regarding oil paints. Although the theories are described fluidly, principles of painting and non-theoretical information about oils as a medium are defined clearly and concisely. This includes the Fat Over Lean Principle, methods of brush care, how paints are made, differences between paint brands, difference between painting surfaces; Verrall captures his 50 years’ worth of knowledge modestly and simply. 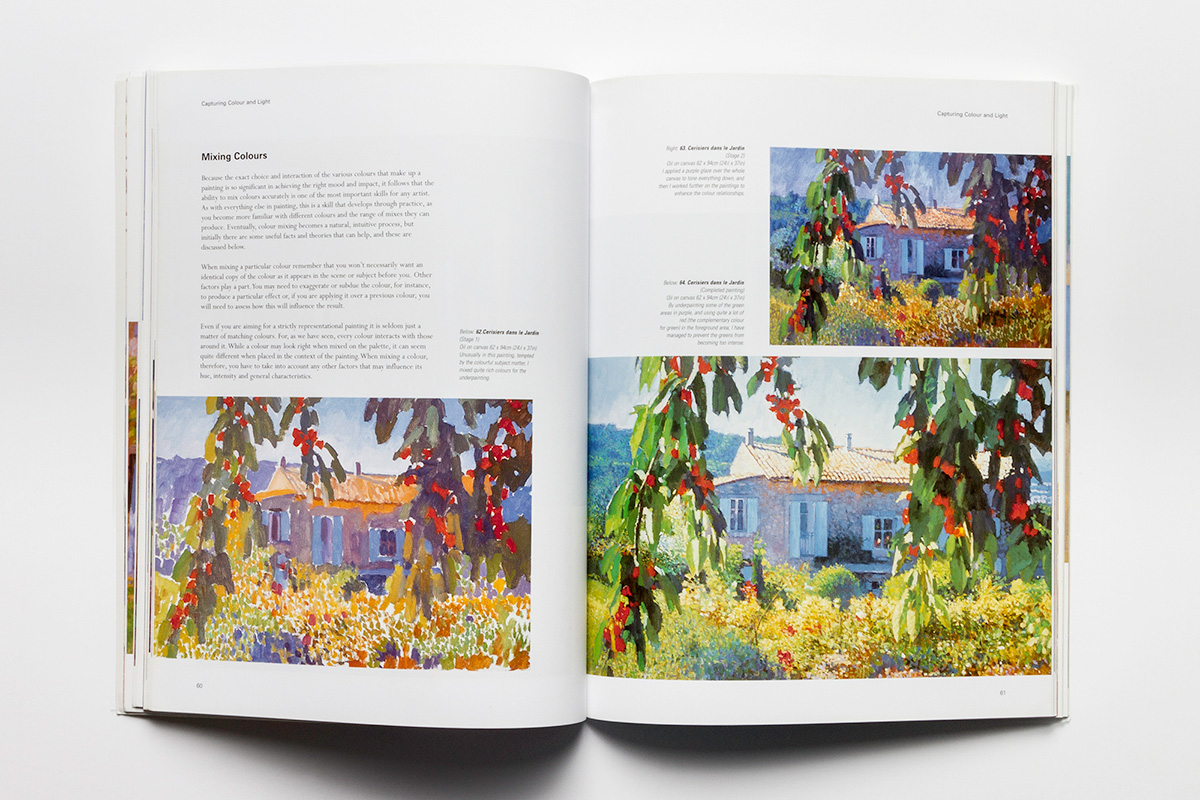 The two elements of ‘Colour and Light in Oils’ that interested me most were the discussions about colour composition and utilising under-paintings. Verrall and Capon explained, among many other things, that a great way to make a powerful painting is to focus on just a selected few relationships within your subject. They wrote that you can home in on those important elements by carefully curating your colours to create moods and draw attention to specific areas. Throughout the book Varrell provided many examples of this in his paintings, showing and describing how he generated atmospheres and narratives by being considerate with his palette and colour-based decisions. He also discussed colour theory in depth, analysing his use of contrasting and complimentary colours within his work. This was supported with photographs of his underpaintings and painting progress shots to show the evolution of his decision making.

I found this section of the book fascinating and wanted to test the versatility and usefulness of Verrall’s comments. I went out and photographed a street during the Golden Hour (a period of time in the day shortly after sunrise or before sunset during which daylight is redder and softer than when the Sun is higher in the sky) as I was interested in both the type of light and the process of rendering architecture, both subjects that ‘Colour and Light in Oils’ focus heavily on. I then decided which elements of my subject I was most interested in; I was fascinated by the type of light, how it shone on the building and the planes of the left house.

My next task was to create an underpainting. I decided on the finished tone I wanted my work to have and identified the main colours – as suggested, I heightened some so they became contrasting colours resulting in a strong colour scheme (Lemon Yellow, Yellow Ochre, pastel blue tones and Viridian Green). To make the underpainting, I then picked three colours that contrasted with the planned final tones (various shades of Phthalo Blue, Lemon Yellow and Cadmium Orange) to ensure all my mark making would be enlivened, related and balanced with colour. I worked as Verrall suggested, thinly blocking in the basic shapes in my limited 3 colour palette. Both of these techniques are designed to quickly capture the foundation of a painting; they worked! They helped me make stronger decisions and notice any major composition flaws much faster than normal. Due to the limited colour range these errors were also much easier to fix! 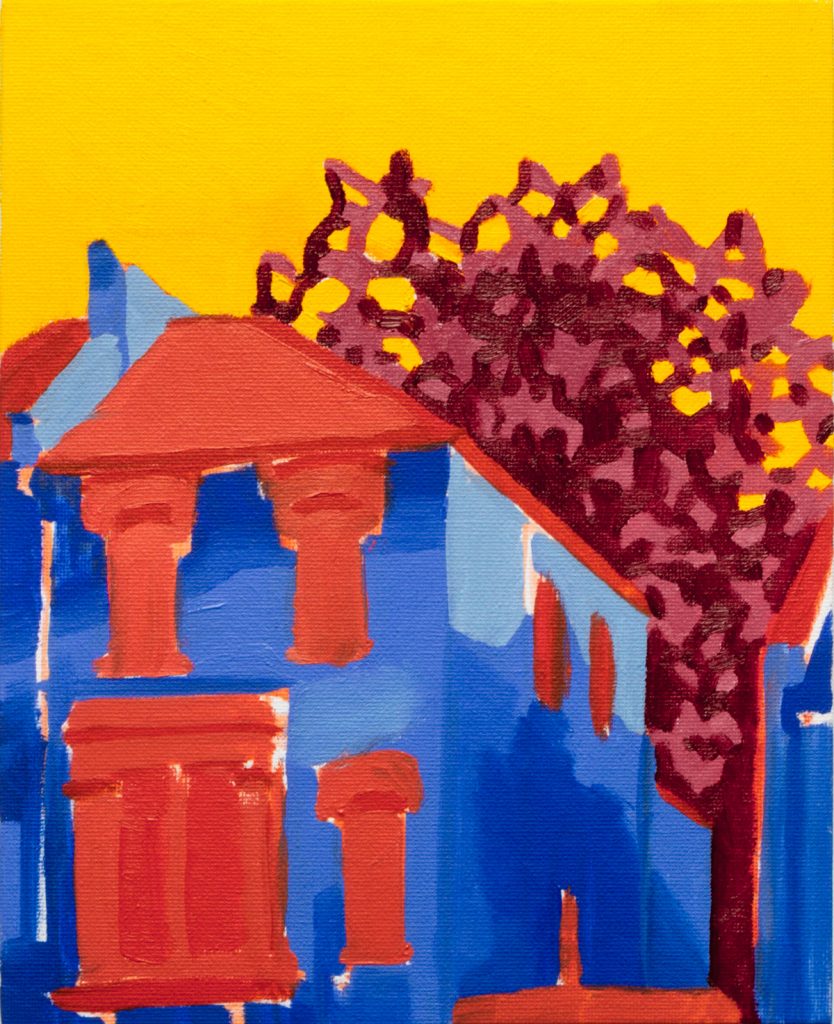 My underpainting made with a limited palette and simple marks

After this layer had dried I worked with smaller, Flat and Bright oil brushes to add the next layer of detail. I found the marks in my underpainting incredibly useful; they helped me understand and capture the atmosphere I was aiming for much faster. Because I was sure of my composition I was able to think much more about my use of colour and make more interesting decisions. 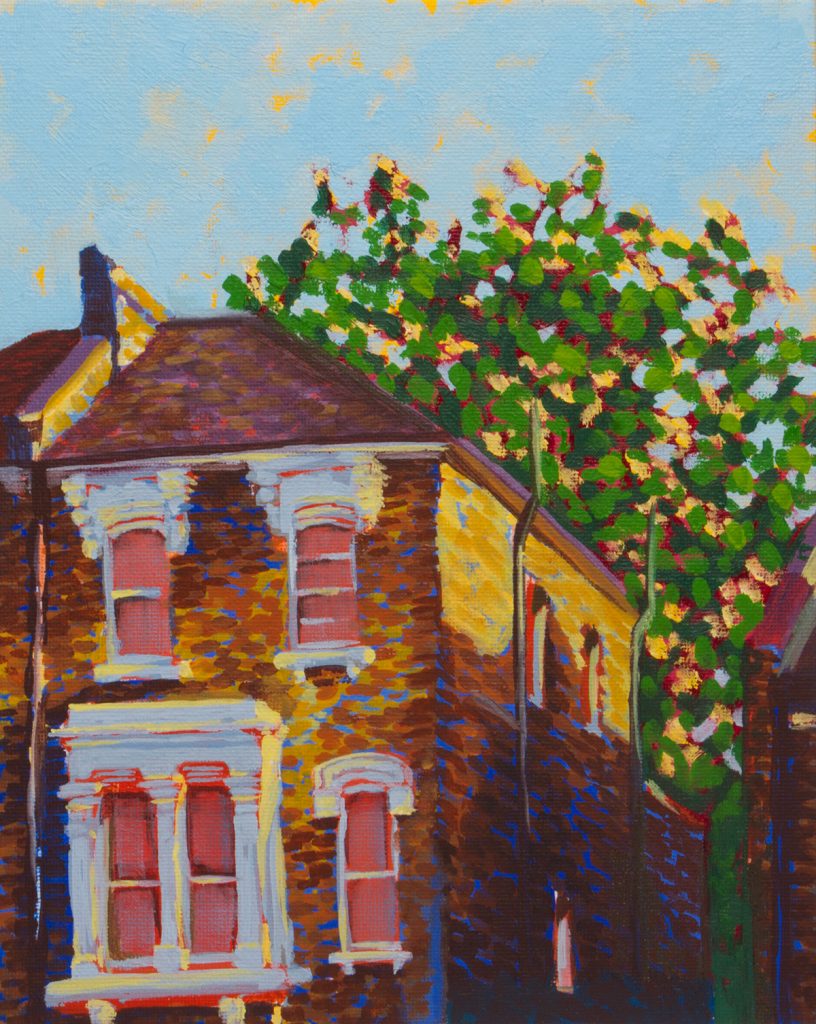 Painting in this way helped me create a sense of balance within my image. The flecks of underpainting showing through unite big areas of the work that drastically change in colour, such as the side of the house. They also relate all of the bright colours I’ve used in a way I often find difficult to achieve – because the underpainting is made of complementary tones they neutralise one another slightly, allowing them to settle next to each other and be seen together.

This is a modest book that reinvigorates classic theories openly and in an accessible manner. While he doesn’t suggest anything groundbreaking, Verrall’s five decades of exceptional painting experience are hard to match. Although upon first read I didn’t think this book was that impressive, I have completely changed my mind now I’ve tested the techniques: the principles are incredibly interesting and useful.  I would recommend this to artists of all levels; it would be a great teacher for those new to light and colour theory and provide a new and broadening perspective to those more competent.