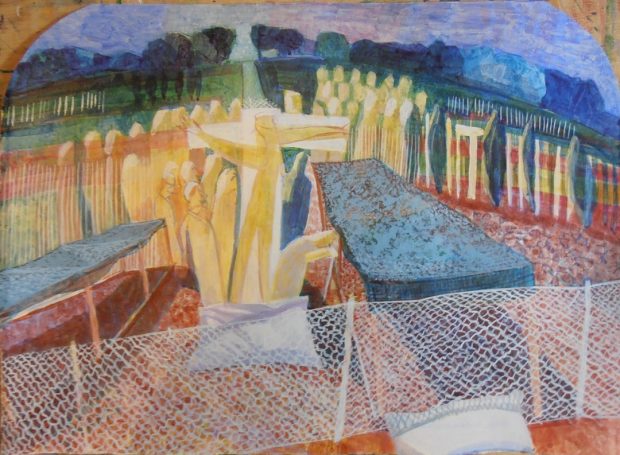 ‘Come Further Away From Your Sources’: An interview with Painter Michael Collins

Jackson’s Art Supplies was proud to sponsor a prize at this year’s New English Art Club Annual Exhibition. The Jackson’s Prize for a work by a non-NEAC member went to Michael Collins for his ‘Study for Birling Gap’. The acrylic painting, executed over several joined pieces of paper, depicted figures standing and conversing by the East Sussex shore. The work is striking for its strong sense of design. The stylised geometry of the figures in the expansive environment rendered in gentle hues evoke the spirit of Piero della Francesca and artists such as Stanley Spencer And Eric Ravilious, who were themselves in awe of the great Italian Renaissance painters. Michael’s paintings depict the everyday in a visually poetic and structured way; pictures developed with a playful and curious approach as he explains in the insightful interview below.

Lisa: What qualities does a subject have to have for you to find it inspiring?

Michael: The subjects I choose are usually, though not all the time, related to the seaside. I like the odd shaped buildings and often their whiteness, juxtaposed with the beach and sea. I wouldn’t find a vast field of heather interesting to paint. It has to have something man made or man influenced amongst the natural world. So a shaley beach would interest me much more as it usually has building or boats or kale on it etc. 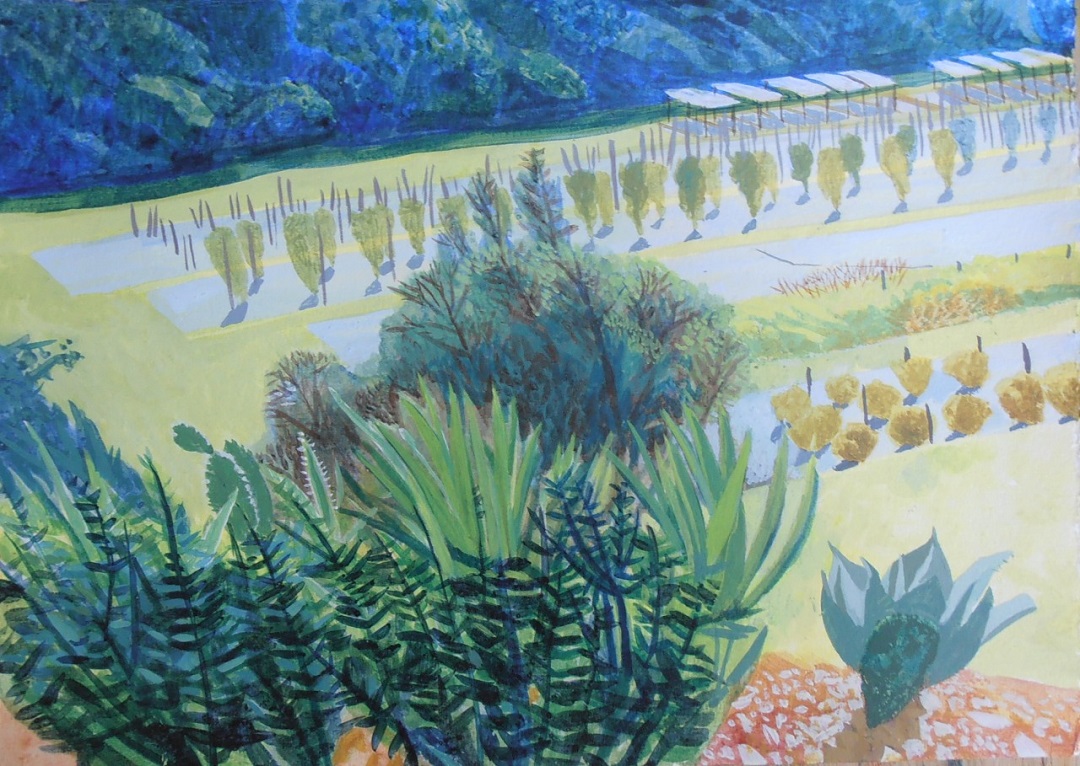 Lisa: Do all your paintings begin with observational drawing in front of the subject?

Michael: Yes, I start with drawing in front of the subject. These days I also take photographs. Once upon a time I would do watercolours as well as drawings on the spot. But these days I don’t get as much time as I used to, so photo sources come in handy, and if used in the right way can be very good information. Though in the studio I like to reinvent the compositions and idea. I was once told by a tutor to come further away from my sources. Use your source material but don’t be a slave to it. The place doesn’t have to be recognisable as a specific place. A good way to come away from your sources is to photocopy your drawing and watercolours say, then tear them up and reinvent the composition. A sort of collaged study. Doing this with newspaper and painting on top is also a good way to vary things. 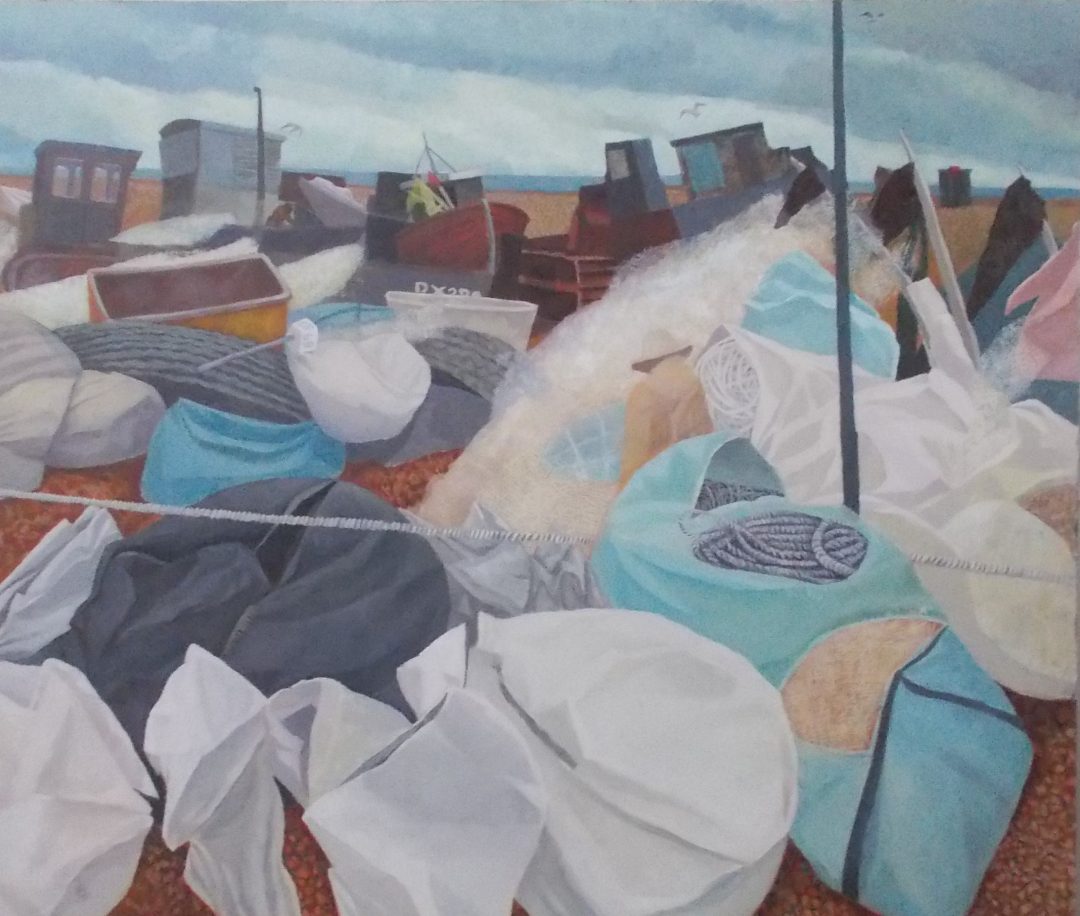 Lisa: Your work is very distinctive, with each composition clearly made up of defined shapes. Do these shapes emerge in your initial drawings or do they creep in when you actually begin to paint your ‘final’ work?

Michael: Years ago I would draw the whole thing out in pencil and then crawl across the surface filling in with paint. These days I still put the main composition drawing in, say thinned down paint, but the process has become a little bit less plodding and more organic. Over the last few years I have become more interested in having opaque areas next to more transparent areas or semi transparent. Flat areas against areas with more varied brushwork or texture. So, with the initial drawings or watercolours done in front of the subject, shapes and masses might suggest I use these in the final picture. Sometimes when I feel that things/shapes, are becoming too predictable in the painting, I will tear a piece of newspaper in a random fashion or relate the torn shape to say a figure I want, and then place this on the surface and paint away from the edge, or if it’s more like a stencil, then fill this area in. So then if I do this at certain times, shapes can build up. I also do a lot of Tonking. I’m not fond of thick paint, so when I put paint on the surface I often press a piece of newspaper onto it and remove some of the paint. This allows me to build up more ghostly shapes in layers, and I can re-emphasise other shapes if I wish. I’ve always wanted figures in my work but felt they were sometimes a bit too clear. Together with a development of interest in using acrylic, gouache or egg tempera, and wanting a more ghostly aspect to the whole structure of the painting as well as the figures, something of what I’m after has began to appear. Artistic influences have also guided this progression. Early Italian primitives are some of my favourite painters, for example Pietro Lorenzetti, Piero Della Francesca, Uccello, and the 20th century painters who were influenced by these such as Stanley Spencer, John Nash, Edward Bawden and Eric Ravilious. More recent favourites are Keith Vaughan and Leonard Rosoman. Also I love the torn edge crispness of John Sell Cotman’s watercolours. Jane Dowling and Leonard McComb are lasting influences as they were tutors at the RA schools for the first year I was there. I was there 1997-2000. 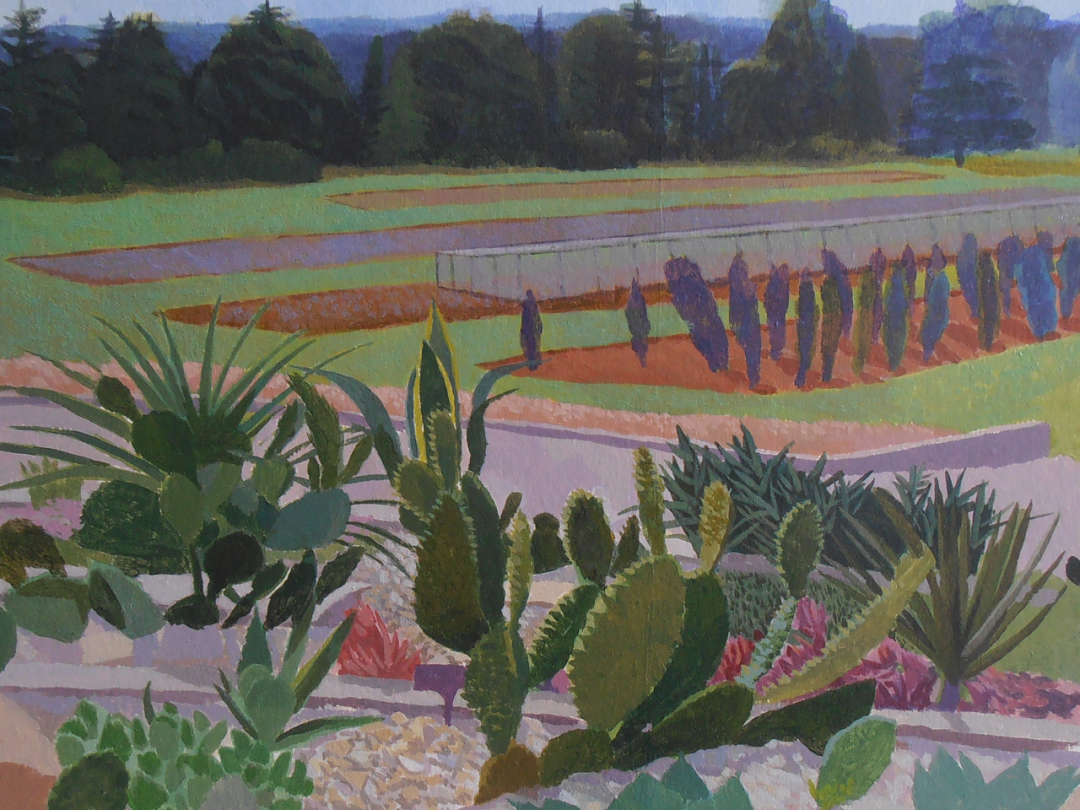 Lisa: How often do you get to paint in an average week?

Michael: Because I am a tutor at two adult learning places, during the academic year, I paint mostly on a Saturday and sometimes I get a few spare hours in the week too. However, during all holiday periods, I can devote much of my time to the art, particularly in the summer months.

Lisa: Are there ever any surprises during the painting of your works or does a thorough drawing/designing stage tend to allow you to know pretty much what the final painting will look like?

Michael: I do have an idea how the painting will turn out finally, but I will change things from the studies in the final painting, such as, certain colours, elements of composition and positioning of figures etc. Although, I think the final outcome is always a bit surprising, because juxtaposing objects and colours over the period of painting, is a very corrective process. Some things work and some things don’t. So you have to do something about it and that can mean obliterating an area which isn’t as vital or as interesting as it should be. I always liken it to printmaking. You have a pretty good idea say of the design and outcome of an etching. But it’s always a surprise when you peel the paper off the press and see the result. 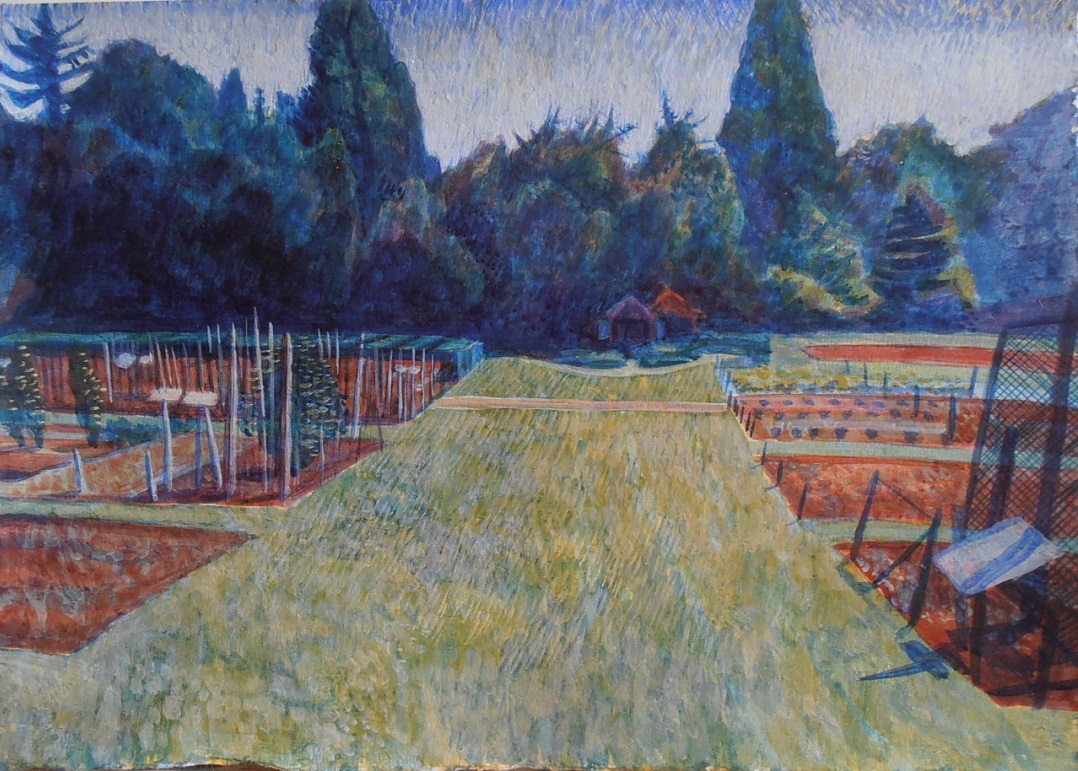 Lisa: How do you select your palette? Do you use colour intuitively or do you always decide right at the beginning what colours you’ll use?

Michael: I do have certain colours in my palette which are always there. I’ve always thought of myself as a tonal person rather than a colourist. In recent years though, I have made a more conscious effort to up my game in the colour stakes. I was taught that the best way to proceed was to have two blues, a purple blue and a green blue, two reds, a purple red and an orange red, and two yellows, an orange yellow and a green yellow plus white. However, things can develop from that in interesting ways, such as mixing two secondary colours together or using split complementaries to create a number of colours and tones. As time has gone on I have introduced and experimented with other colours such as ready made greens, orange and purple, plus colours like raw umber and burnt sienna. I also have two whites, a more opaque Titanium white and a more transparent Zinc white. 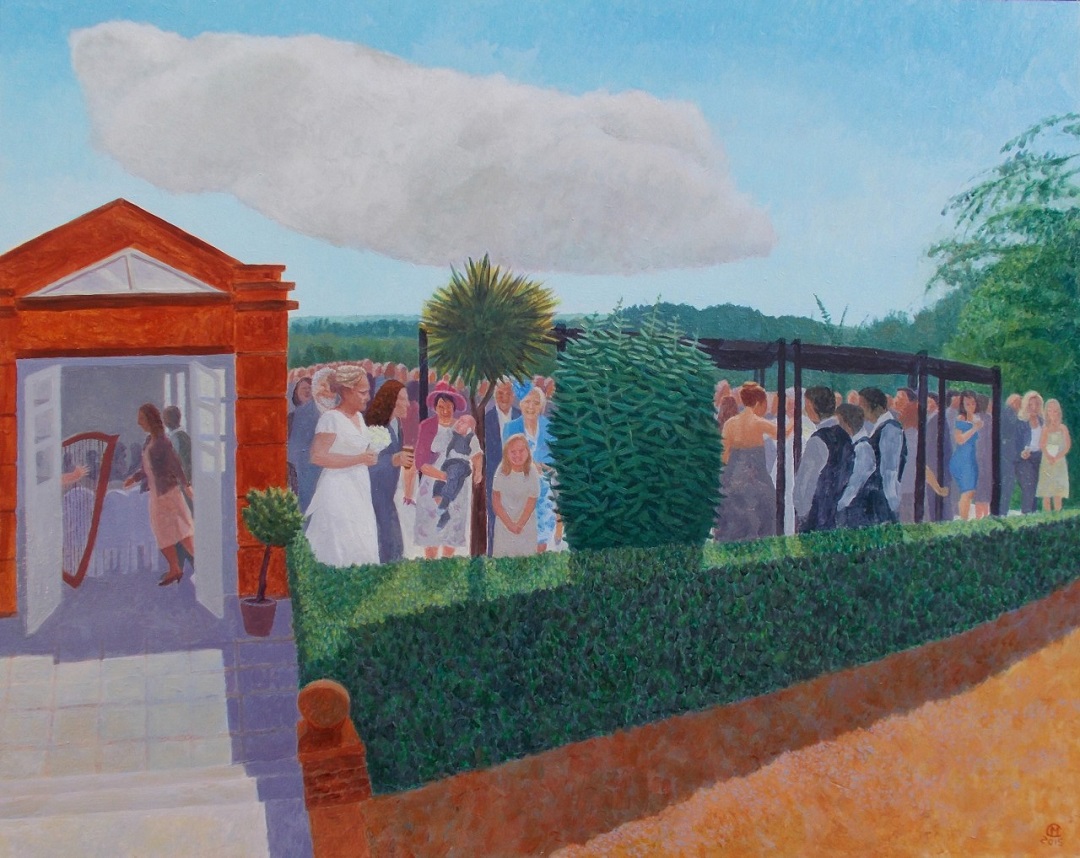 Lisa: What is your favourite medium and why?

Michael: I like different mediums for various reasons. I often find painting in acrylic onto torn newspaper or collage a favourite way of developing ideas. Oil is a much more subtle medium I find than acrylic, and at the moment I’m using these new waterbased oils, which I was a bit suspect about at first but am now beginning to like. I like to work on bigger paintings in something that can grow over time and oils seem to do that job well. I do a good deal of Tonking in my oil painting, building layers up gradually. I’m also a great fan of egg tempera, but don’t use it enough. I love the fact that you can scrape areas off and leave a ghostly image, draw into it with pencil and build the colour up in layers.

Drawing is at the foundation of it all. Various tones and developing shapes and forms, from observation, other drawings or photos is a good way to develop ideas. 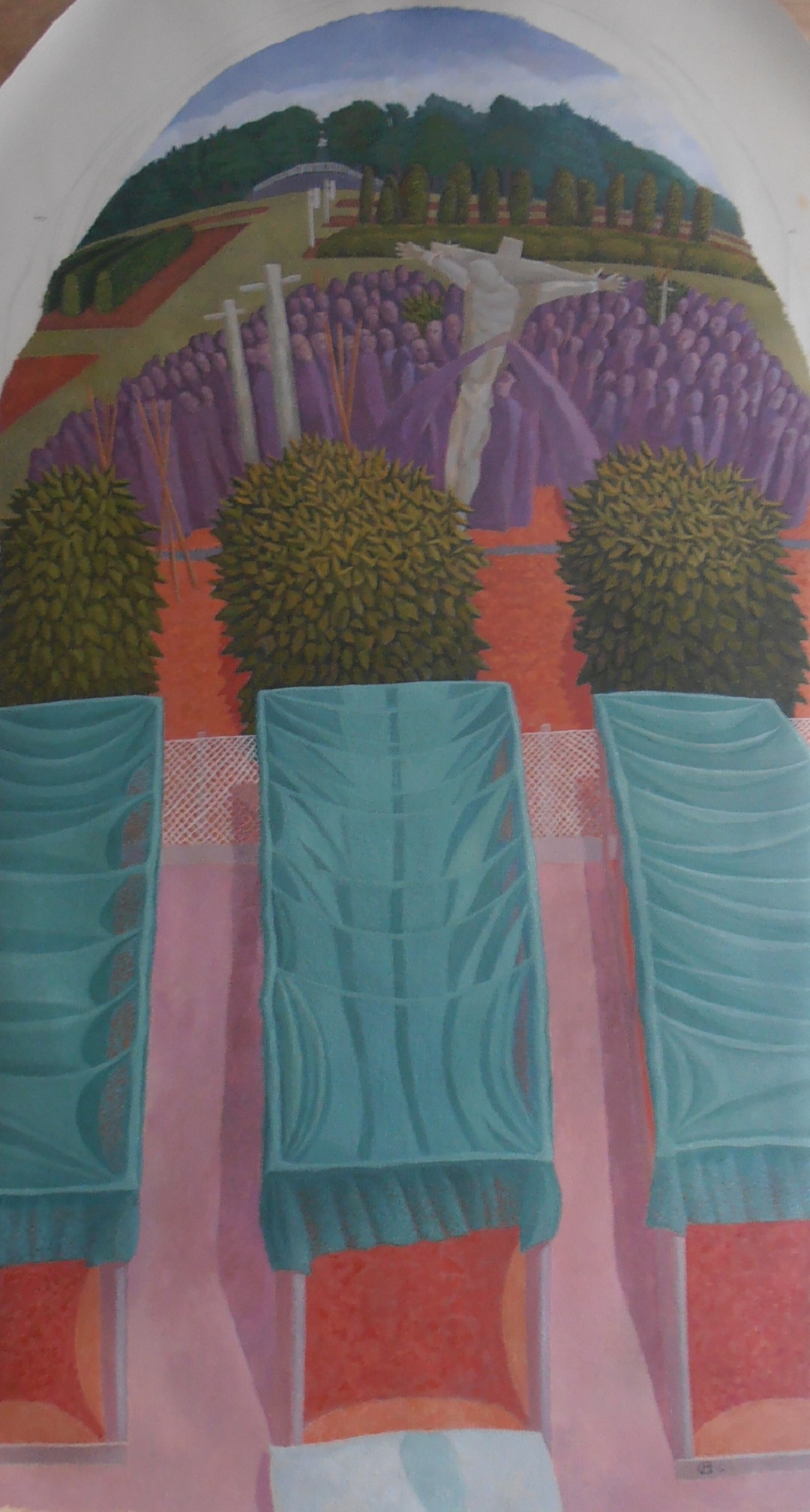 Lisa: Do you still teach? If so at what level and how do you think it informs your own painting practice?

Michael: I do still teach. It is teaching adult learners on what would be called ‘Leisure Courses’, which is rewarding in the main, sometimes exciting and often frustrating. The main problem of teaching adults on these types of courses is that at the very fundamentals, there’s a dichotomy. How art is taught say on a BTEC, Foundation, degree and Masters [which is the background many tutors come from] is completely different to what an adult thinks they should be learning on a leisure course. A bridge has to be formed and some learners cross it and some don’t. I try to teach the fundamentals and disciplines and experimentation that I have been taught and continue in my own practice. 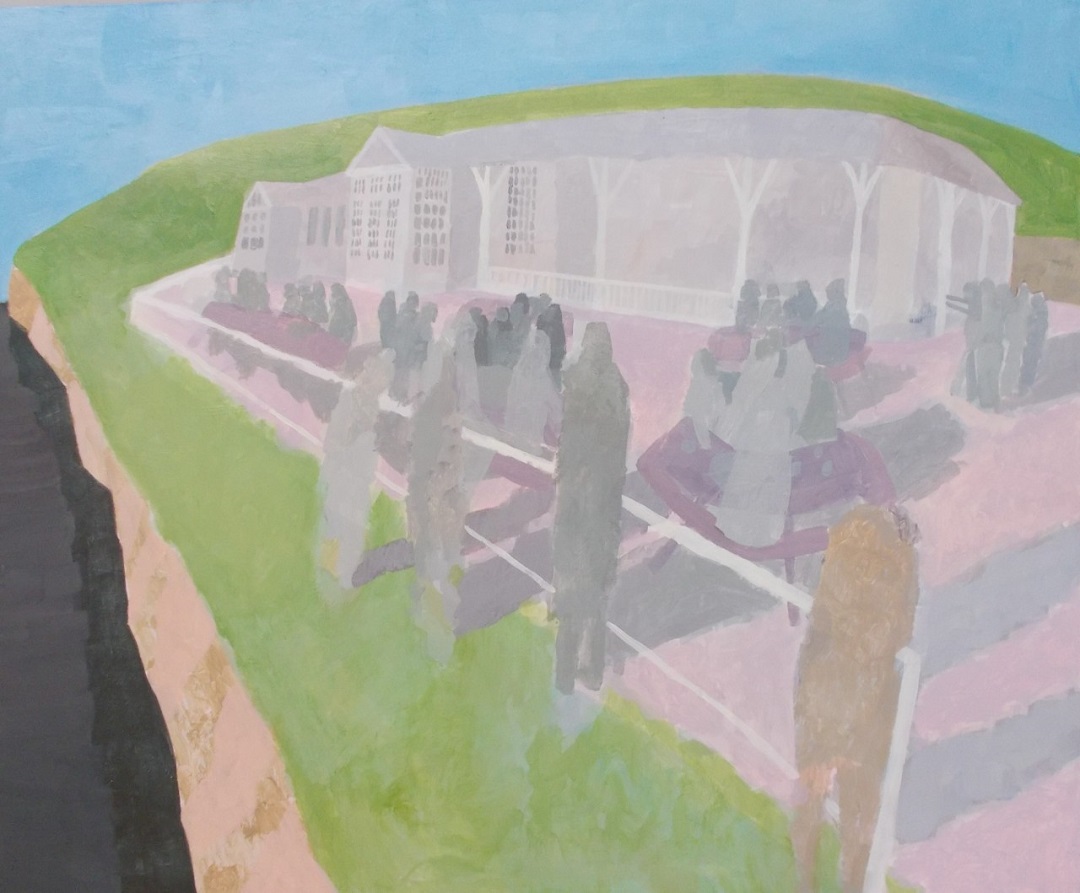 Michael: At the moment I am working on developing a series of paintings which looks at the sort of debris found on beaches, particularly in this case, Hastings beach. I was down there about a year ago and was much taken with the shapes and forms of the plastic bags that hold many of the fishing nets. The smoothness of the bags and the more rougher texture of the nets splurging out from these bags. Together with the shale, flag poles, boats etc. Most of my stuff has been concerned with the seaside since about 1998.

Michael: I am a member of the Royal Watercolour Society, so people can see my work at the Bankside RWS exhibitions there twice a year. I also submit work at times to some of the exhibitions at the Mall Galleries. I hope to exhibit more often in say the NEAC exhibitions in the future. A gallery in London has invited me to work on a group of paintings in the future, hopefully 2019. That’s what I’m working towards with the beach debris project. Also, people can see my work at collinsoncanvas.co.uk which is my website. However I hope to have a newer website developed later on this year. 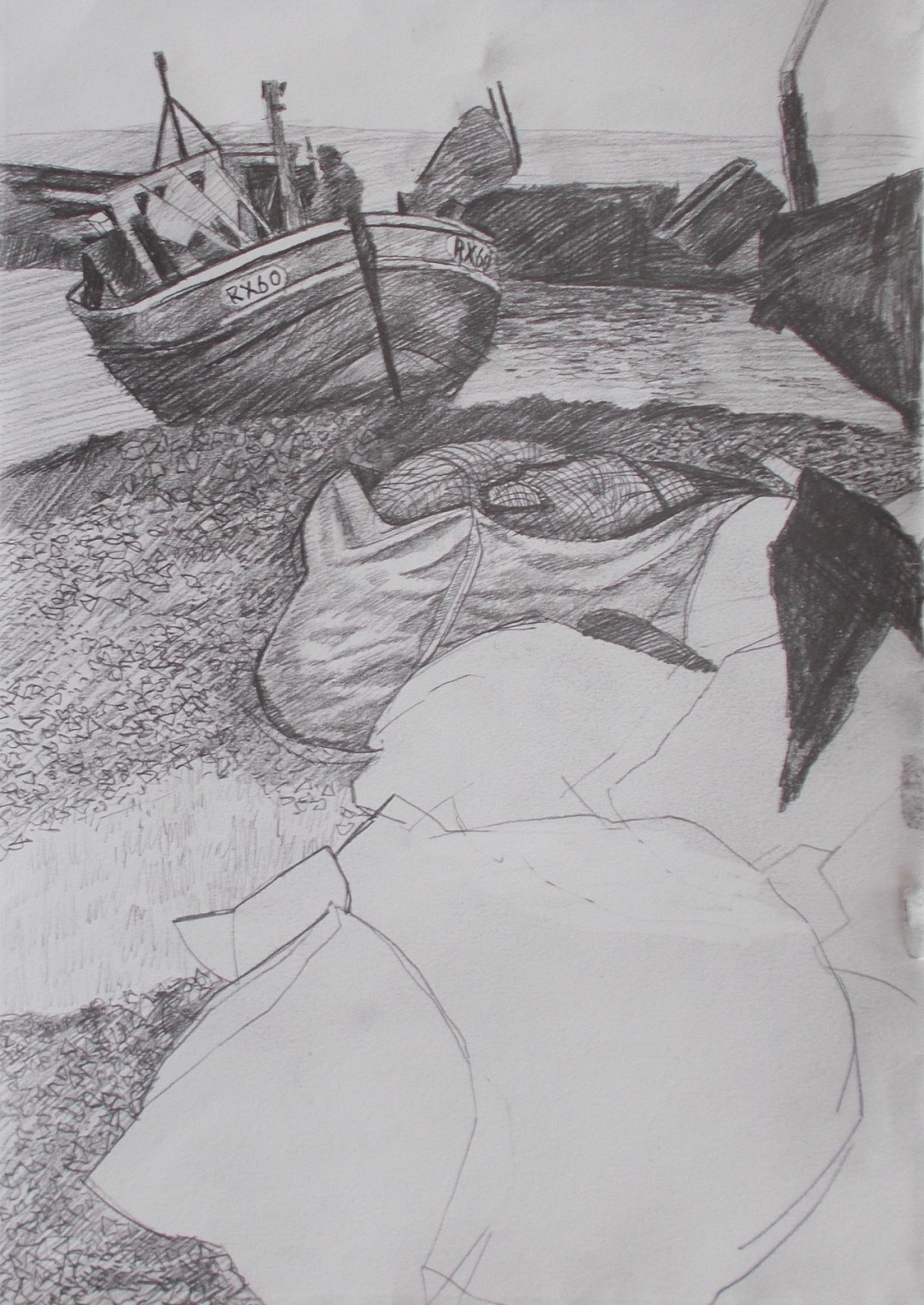