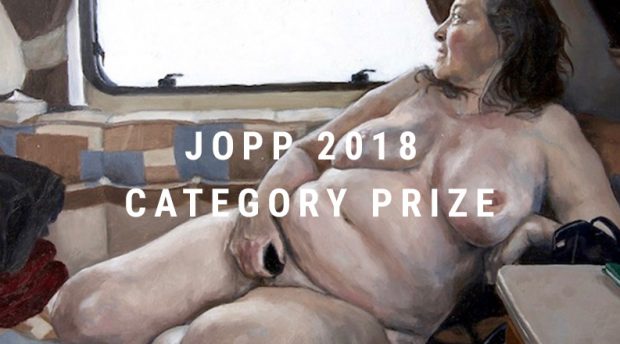 To ensure every genre of art is appreciated equally in our Jackson’s Open Painting Prize, we are awarding 6 Category Prizes to our 350 Longlisted works! Upon entering, artists had to tag their work the most appropriate subject matter, choosing between Portrait/Figure, Animals, Still life/Botanical, Abstract/Non-representational, Landscape/Cityscape/Seascape and Scenes of Everyday Life. Jackson’s Judging Panel will choose one winner from each category so that all Longlisted works can be judged against works with a similar subject matter, alongside being considered for the other prizes. All 6 category prize winners will win £500 and will automatically be placed in the Shortlist.

‘This particular painting is inspired by both the traditional nudes of the masters and modern-day domestic life. The moment captured is from a caravan holiday of which the woman reclines in a natural relaxed pose but of which also echoes the stance of famous historical subjects such as Manet’s Olympia and Titian’s Venus. There is a private yet exposed feel to this particular work due to the caravan setting; an enclosed space in a very public place.’

Lisa Takahashi: Can you tell us how you came to paint ‘Nude in Caravan’?

Alicia France: At the time I produced ‘Nude in Caravan’ I was engrossed by the idea of naked portraiture, but also, the need to relay how extraordinary the ordinary can be when reborn as a piece of art.

My mother was the first model and has remained one of my main inspirations and subjects throughout my practice. Nude in Caravan was the first time she modelled for me which happened to be on a caravan break in Northumberland. It just felt like a perfect opportunity to capture her in a wistful mindset not preoccupied with the routine of life. The setting of the caravan was both an association with my mother but also an interesting and unique environment to paint a nude, a space both enclosed and in the open, private yet public.

How important is the authenticity of your female nude paintings? Do they tell us something about real people in real settings, or are these paintings more to do with telling stories – staging compositions in order to give a commentary on women today and how they compare to the figures seen in paintings throughout western art history?

Authenticity is something I think a lot about when it comes to my nude paintings. I find it important in two ways: the portrait itself and the environment in which the subject is shown (and the objects around them.) Nude or ‘naked’ portraiture physically demonstrates the individual in their truest form; we see the person in their most natural state as a human being. In Nude in Caravan, I gave no direction to how the subject posed. With this mind, it fascinated me how similar she appeared compared to classical nudes throughout western art history such as Titian’s Venus and Musician or Manet’s Olympia. This has continued to inspire me throughout my practice.

As well as the portrait itself, I think that the surroundings play an important role too. Where they are, what they are holding etc. Most of these aspects aren’t controlled so as to preserve the authenticity of the moment captured. I like the thought that this may give enough (but not too much or too obvious) information for the viewer to read the painting in their own way.

In these nude paintings, I aim to create a true portrait of the individuals themselves but also as a reflection on modern life as a contemporary woman in western society.

What is it about painting on aluminium that you like so much?

Aluminium provides me with a solid and smooth surface which I think contributes to creating the texture and glow of the skin. I also like the contradiction between the painting of soft flesh on something so harsh and cold like metal.

What I love about aluminium is how it makes the painting feel more like an object as well as just a canvas. The way the paint sits on the surface some how makes it pop out and seem more 3-Dimensional, coming to life with every stroke.