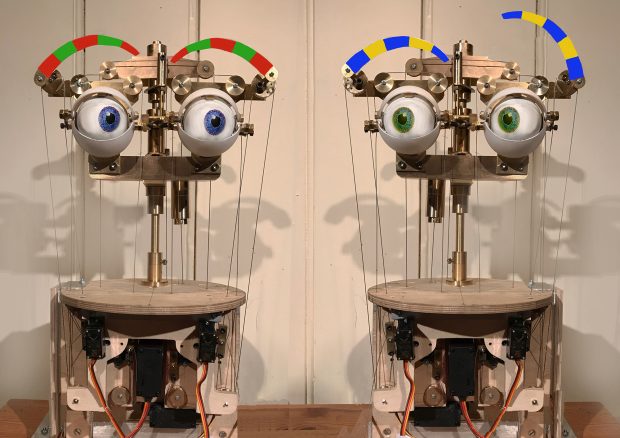 The Frankenstein exhibition at the Espacio Gallery marks the 200th anniversary of the publication of Mary Shelley’s famous novel. Meditating on and inspired by the themes of the novel, the eleven exhibiting artists’ works explore and push the issues that are still so relevant in the book today. From a conflict of technology versus nature, monstrous birth, dual conflicting narratives and the affects intolerance and fear have on innocent individuals, this show truly takes and exposes the poignancy of this masterpiece written by a 20-year-old woman. It includes both paintings, prints, interactive digital and 3D pieces and experiments with what is, can, and should, be happening in the world currently. 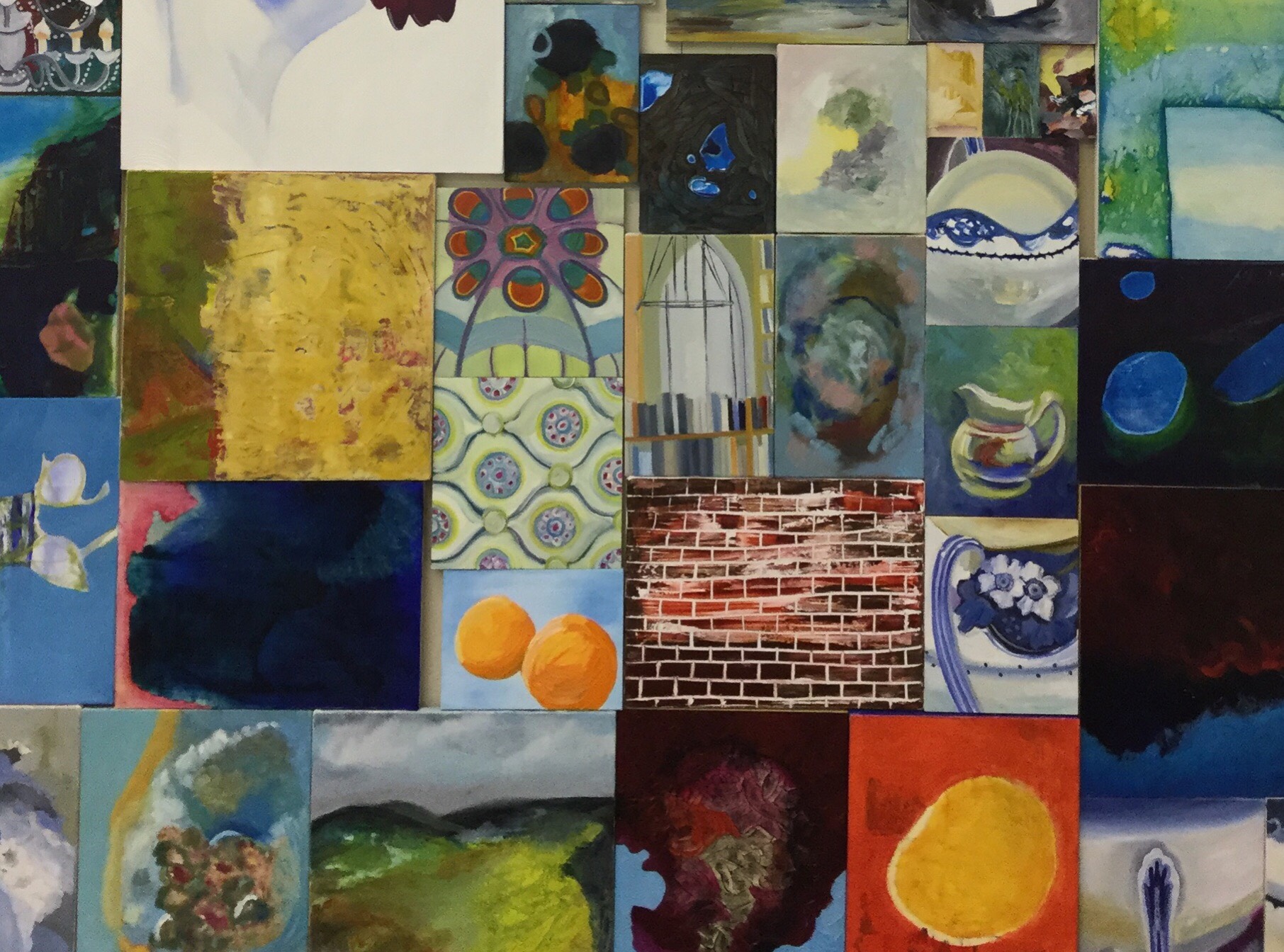 Julie Caves, A Monster (what is to be done about what we have created?) (detail),

Julie Caves’ work mirrors the fact that Frankenstein’s creature is constructed from distinct, separated parts and that he has no idea, initially, what they will form and become when collected together. By carefully piecing unusual, different and complete paintings made over several years, Julie not only plays with the intent of creation but also produces a montage as a large scale final piece that shows what can be birthed from an amalgamation of the many, or rather the mass and the overwhelming-ness the creations can have as they come into existence.

Her statement on A Monster (what is to be done about what we have created?):

“The piece is a sort of Frankenstein’s monster created from over 100 small and medium-sized paintings joined together into one enormous lurking creature. The paintings are in various styles painted over an extended period (2005-2018) in oil and acrylic on canvas and panel.

Most analysis of Shelley’s novel concludes that the main idea of the book is the fear of science acting without conscience and worries about genetic engineering in particular. But some thinkers have focussed on a different idea. French philosopher Bruno Latour believes that the real lesson of Frankenstein was not that we should prevent the creation of monsters but that we should “love our monsters”, that creators need to care for their creations. Asking the question “What have we created?” political theorist Langdon Winner suggests the possibility that we may all face a permanent bondage to our own inventions. Most readers will realise as they feel for the tortured ‘monster’ that the real crime of the story is the abandonment of the creation by the creator.

In addition to her interest in this idea of creators caring for their creations, the title of Caves’ work references the text of the 2014 novel ‘Dept. of Speculation’ by Jenny Offill in which the nameless female narrator speaks of becoming a serious artist: “Women almost never become art monsters because art monsters only concern themselves with art, never mundane things.” The work also points to not a small amount of concern that many artists have about creating more stuff in a world already overflowing with it and the practical difficulties of dealing with decades of paintings produced from a dedicated studio practice.” 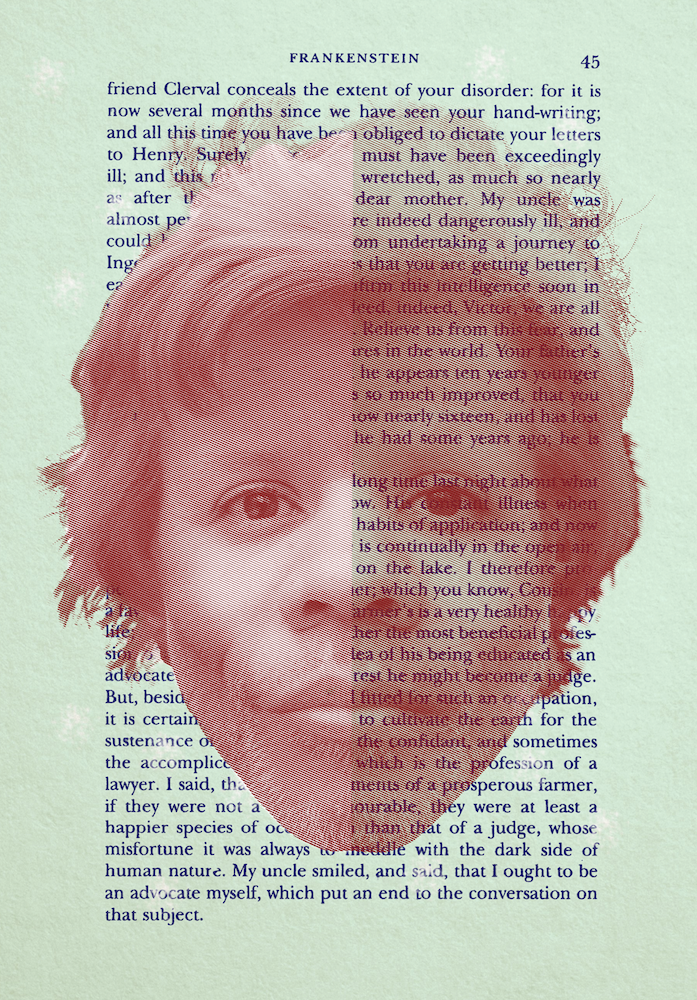 Greg Martin focuses on whether the creature has recollections of past lives and if the body parts could contain their own stories, creating a memory that is a hybrid. The work in progress above makes a truly, uncanny portrait that subverts the creature’s appearance. Here the ‘monster’ looks like it has a child’s eyes but with the jaw and mouth of grown man, emphasising innocence with a strange undertone, whereas the creature at the beginning of the novel has a tableau rasa, pure soul but a horrific visage that only a blind man can look past. Martin’s fascinating narrative of memoirs is created using collage, screen-prints and a shirt. 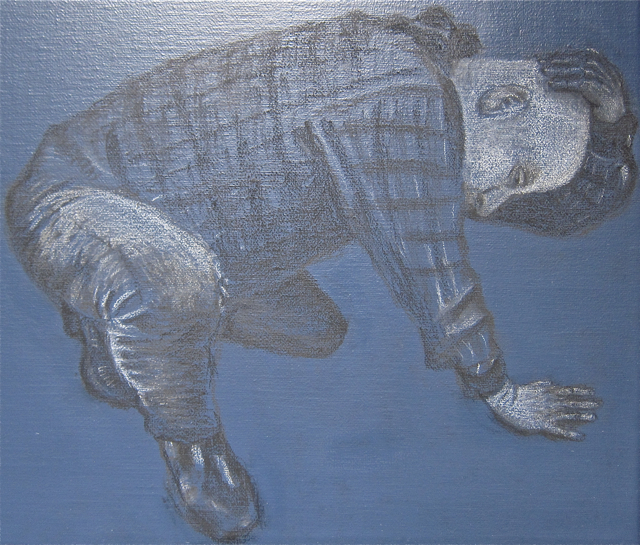 Nick Hazzard interrogates why the creature becomes violent, distressed and scared. Through figurative paintings, Hazzard looks at the creature’s vulnerability and at the intolerance of those he comes into contact with, alongside intolerant society as a substantial thing, and how that leads to rejection persecution. The works that show a straining and a slight hopefulness in the face of adversity ask ‘How does society treat those who are different?’

There is a lot in ‘Frankenstein’ that resonates with what’s going on in the world today. For instance, the creature tries to fit into the community but because he’s different he’s rejected. So there’s the very current theme of intolerance. The creature doesn’t start out evil – at first he’s sensitive and kind, but it’s his treatment by the world around him, the loneliness and persecution, that turns him into a monster.

I think it’s the way the story holds up a mirror to society today that’s most thought-provoking. To express that my work features crouching figures – not the creature as I wanted this to feel more universal – who are being attacked or hemmed in and surrounded by partly abstract, partly concrete elements. So here we have the outsiders, the strangers, misunderstood and maligned. Or do we?
There can be a different reading of these images. Could those figures be the locals, the natives, as though under siege? That all depends on your point of view.
Look again. Are those figures transhuman? Has man and machine become one, and has the rest of society turned on these new monsters? Or is this us, cowering in dread from technology we’ve created that has run amok? That all depends on your point of view.
We don’t just seem to be losing the ability to tell fact from fiction, we also seem to be finding it harder to see the other side of the story. Locked in our bubbles, we only see the monster we want to. 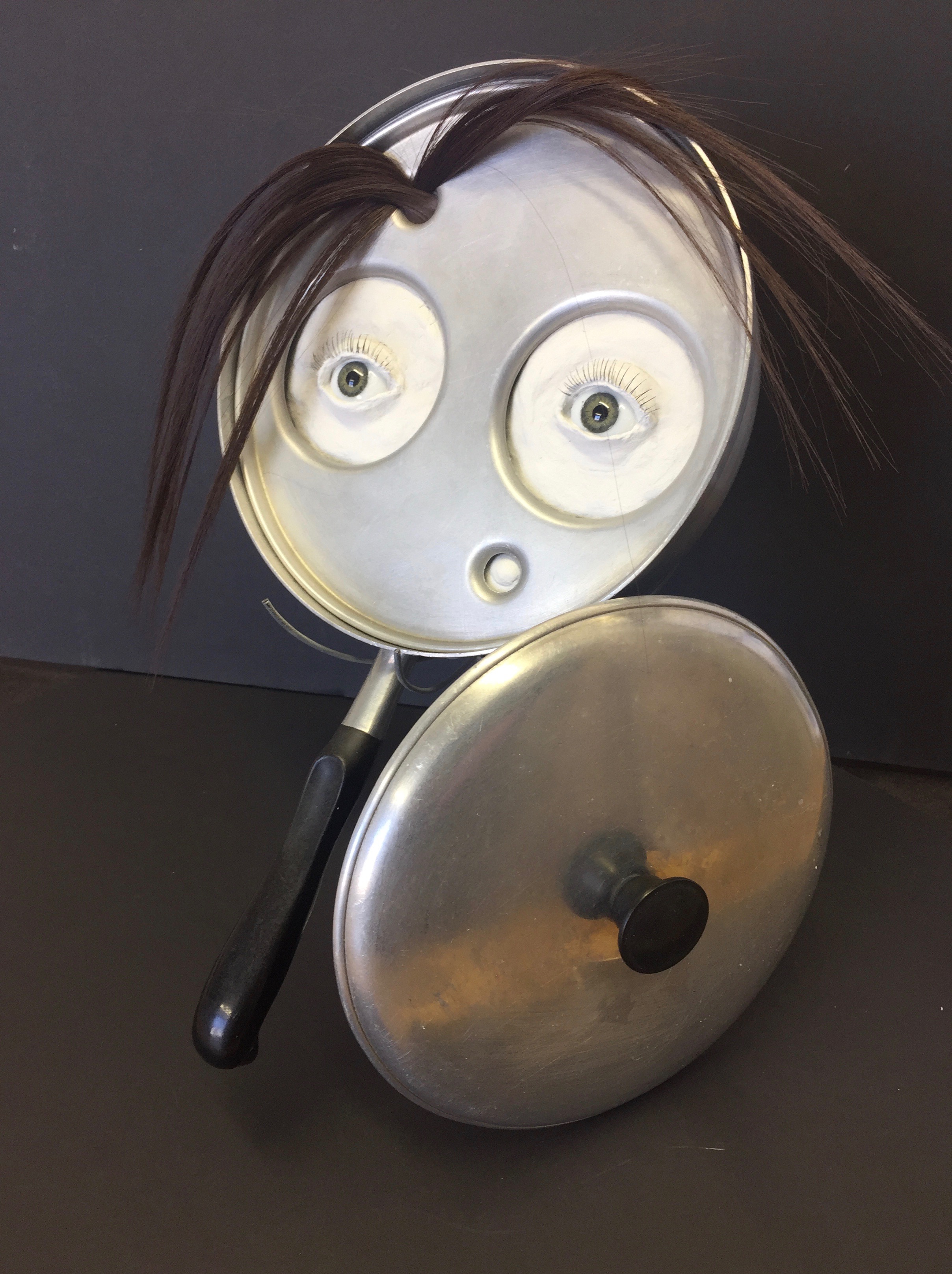 Esperanza Gómez-Carrera’s sculptures and collages further push the themes of rejection and loneliness, as well as misinterpretation, felt by the creature or in fact the other characters that are ostracised in the novel. Her use of materials and will to experiment really come to the fore in the pieces that look out almost woefully into the future contained within mundanity and yet full of potential. 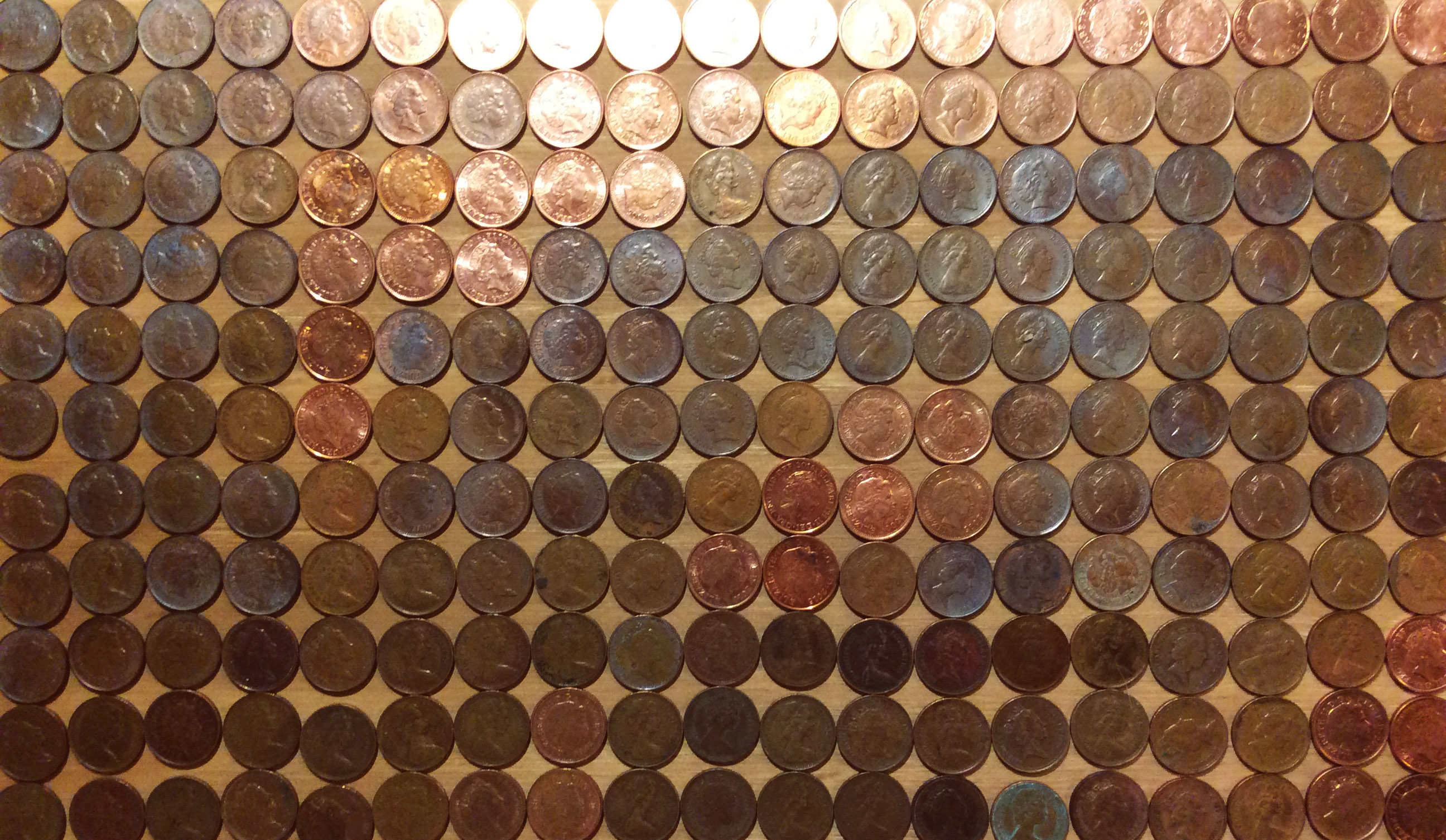 Hubris, the determination to defeat death and youthful arrogance gave Victor Frankenstein the desire and drive to design and fulfil the making of his creature, followed by naivety and ignorance which caused him to reject and disavowal his successful creation. Sara Wickenden looks at how and why there are modern day equivalents, what forces people to produce and why do they then discard or wilfully ignore what they have created or caused. In response out of a coin mosaic Wickenden has worked on Boris Karloff’s iconic image as Frankenstein’s creature. 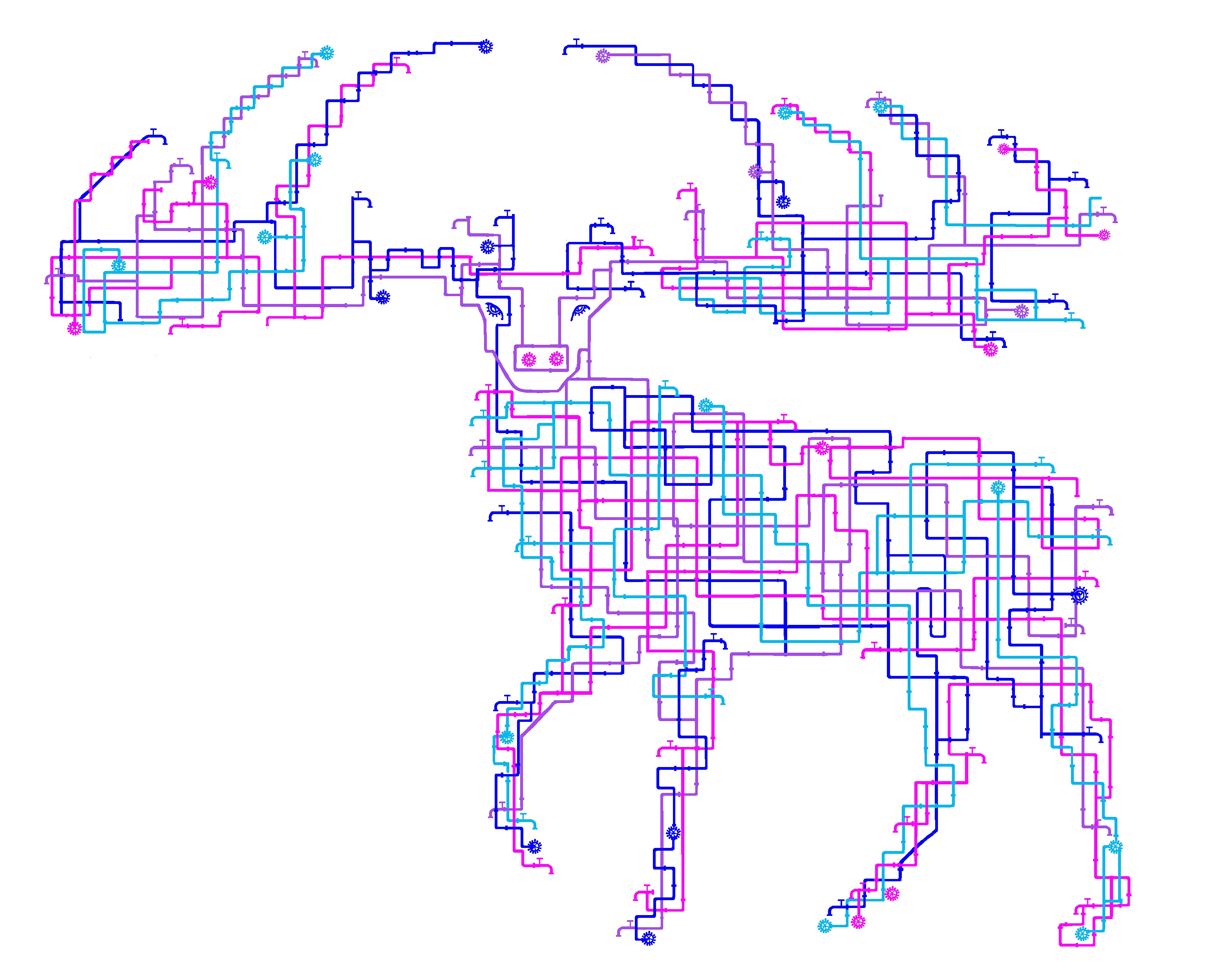 The conflict of and collaborative approach to nature and technology which is evident in the book, is also emphasised by Liz Whitman-Smith. Her interesting and curious screen-prints combine these two elements by experimenting with robots and the idea of reanimating extinct animals through advance technology, experiments that mimic Voctor’s hubris without prefacing the human condition. Whiteman-Smith’s creatures, or monsters, include a clockwork Tasmanian tiger, the Pipework Elk above and an electronic dodo. 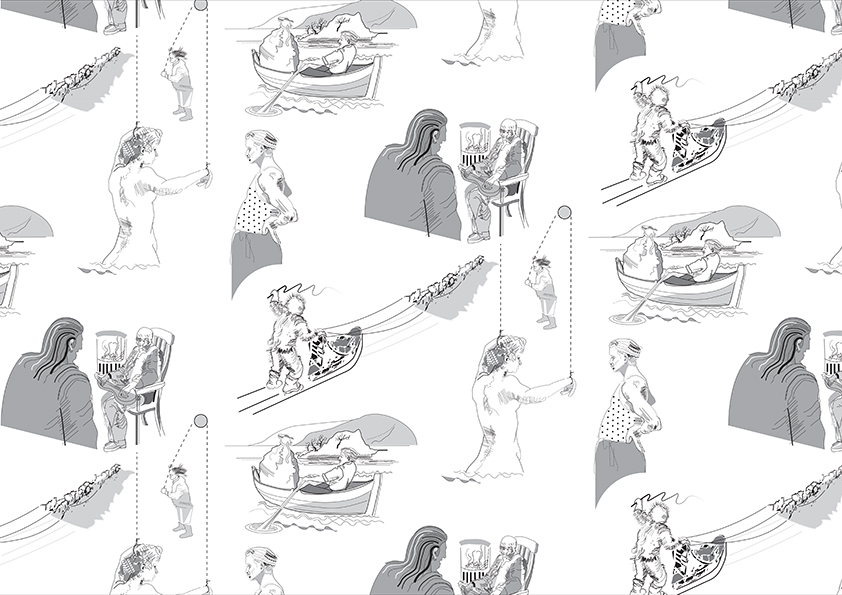 Chris Mercier looks at the link between storytelling and textiles, his intriguing printed toile no only links to the physicality of the subject matter of the book but resonates with the cyclical narrative (or Chinese box narrative) format where each story is contained within another that circle almost endlessly. The toile illustrates moments from the novel and contemplates modes of production.

To find out more about Chris Mercier’s work for the Frankenstein exhibition and his entire practice, you can read our interview with him here. 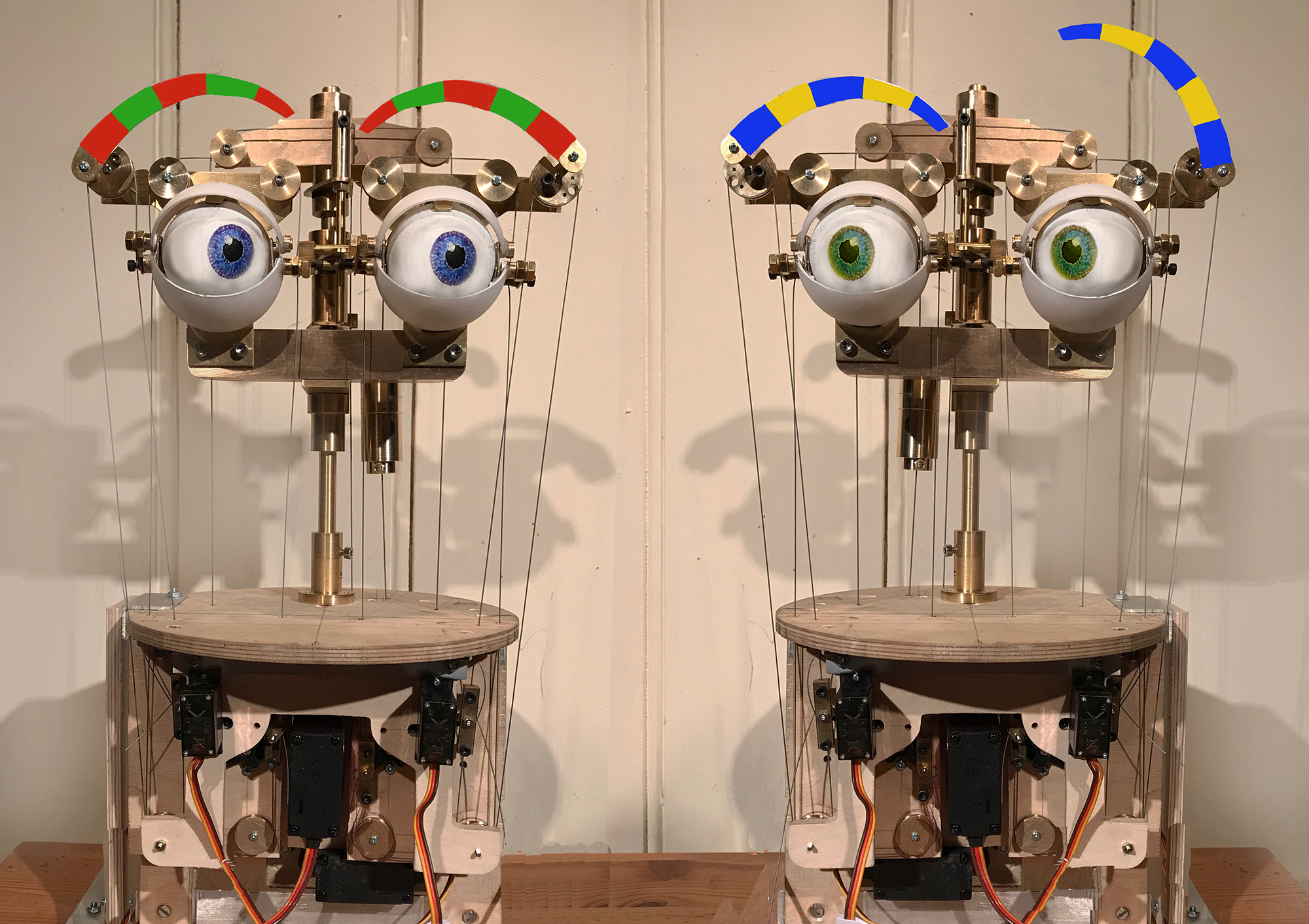 As self-animating non-organic life was just beginning as a possible thing and an anxiety at the time Frankenstein was written and now has become an average part of our daily life with AI know posing the possibility of intelligent independent life. Graham Asker has designed Brian and Brenda two fascinating robotic heads that the visitors can meet and consider where with inanimate, animate life evolve too. 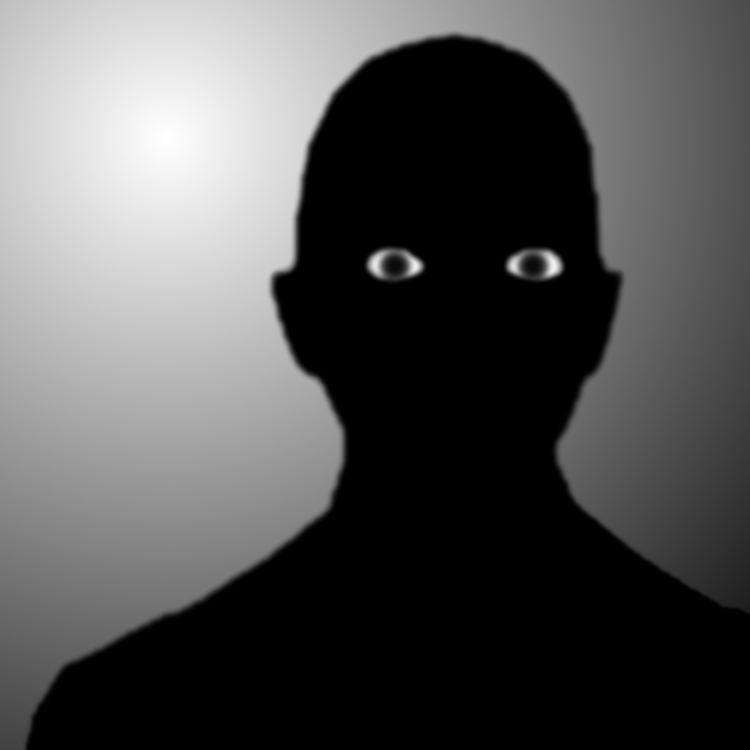 Daniel Munday’s piece is a kinetic driven creature that complements and is complemented by Emma Hammond’s sound poetry. Hammond’s work focuses on the life of Mary Shelley. A life that involved success, alienation, exclusion, massive creative output and tragedy, as well as demonstrating genius and strength.

All eleven artists have produced a piece collaboratively that visualises a creature made from separate and disparate parts. This can be seen between the basement and the ground floor. And brings together the sense that each artists’ response to Frankenstein while distinct, personally reflective and stimulating has helped to unite the exhibition, to create a show full of complementary artwork and to form a dynamic dialogue with the audience. Each day will provide the public with the chance to discuss work with at least a few of the artists as well as seeing what a show looks like when the artists are actively involved.