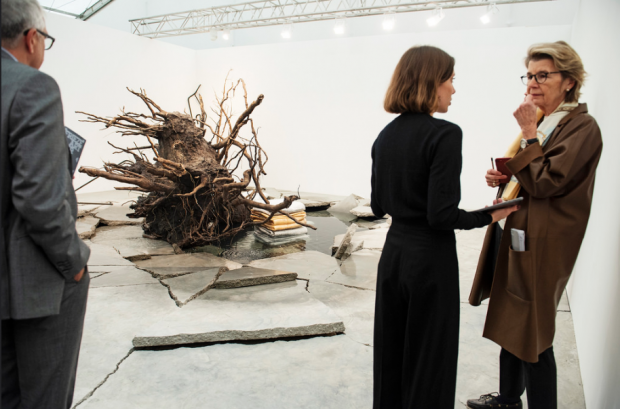 Frieze London and Frieze Masters, now in its 15th year, is currently open to the public. A distinct highlight of the art industry’s calendar, Frieze features works from the world’s most important galleries as well as interesting, ambitious, contemporary performances, projects, talks and film screenings. With over 160 galleries showing the best contemporary work that pushes the boundaries and progress in art in imaginative and unusual ways, you also have the chance to see Frieze Masters and Frieze Sculpture in Regent’s Park creating a lovely juxtaposition of different forms of artistic excellence. 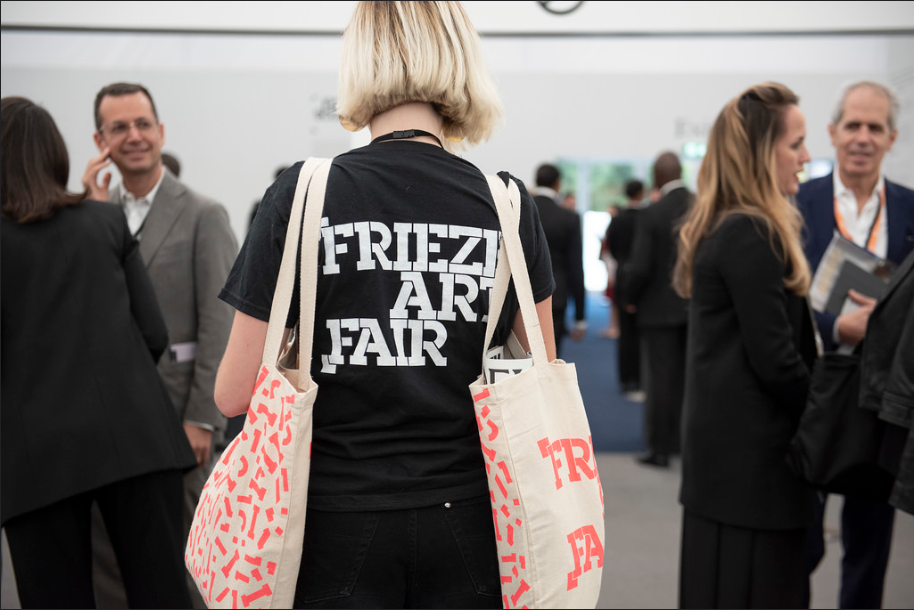 Where: Frieze London is located in the south of The Regent’s Park, with the entrance off Park Square West. The postcode is NW1 4LL

Tickets:All tickets are limited and often sell out. Book in advance to enjoy discounts and ensure entry. Tickets start at £26 (for Student one day tickets) and go up to £537.50 (for bespoke preview tours).

You can buy tickets here.

Victoria Siddall (Director, Frieze Fairs) said: ‘Following major museum sales and record collector attendance last year, I am really looking forward to the 16th edition of Frieze London. A fair is made by its galleries and the list this year is stronger than ever – from galleries who have been with the fair since its launch in 2003, to today’s most exciting new programmes in London and across the world. I’m also thrilled to welcome great international curators across our sections and talks who will ensure an exceptional quality of programming at the fair and will explore its wider cultural significance for today’s audiences. The fair continues to be a key destination for collecting institutions and our collaborations with Tate and the Contemporary Art Society enable the entry of works by today’s most forward-thinking artists into national and regional public collections.’ 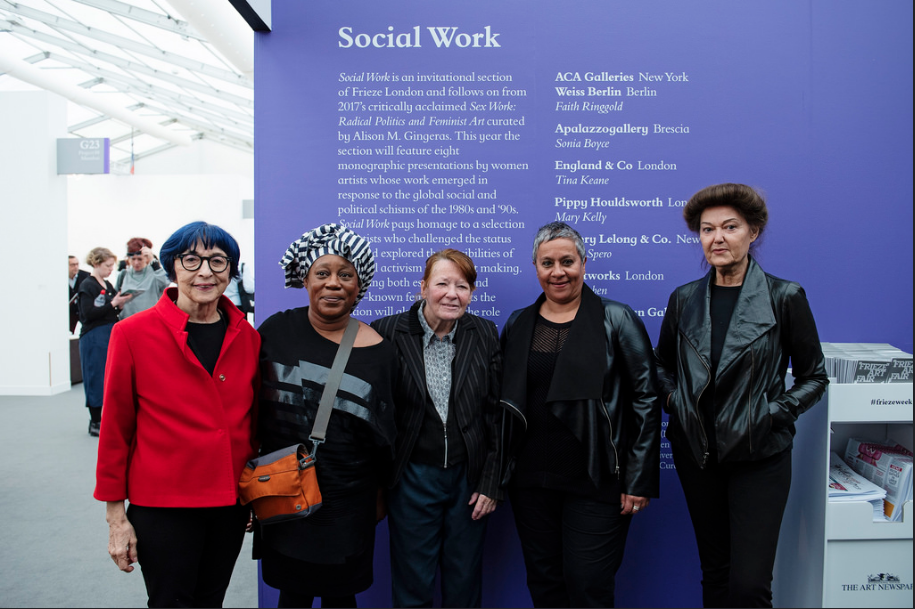 This year ‘Social Work’ is filling the lead section in Frieze London’s organisation. This section is made up of presentations by eight women artists reflecting on the global and social upheavals during the 1980s and 1990s focusing on the artists who challenged the male-dominated status quo and pushed the potential of political activism in their art.

This section not only champions feminist and activist artists, some of whom are established while others are less well-known, but also places emphasis on the role galleries play in the support of artists whose work often challenges or is rejected by mainstream tastes or even doctrine. 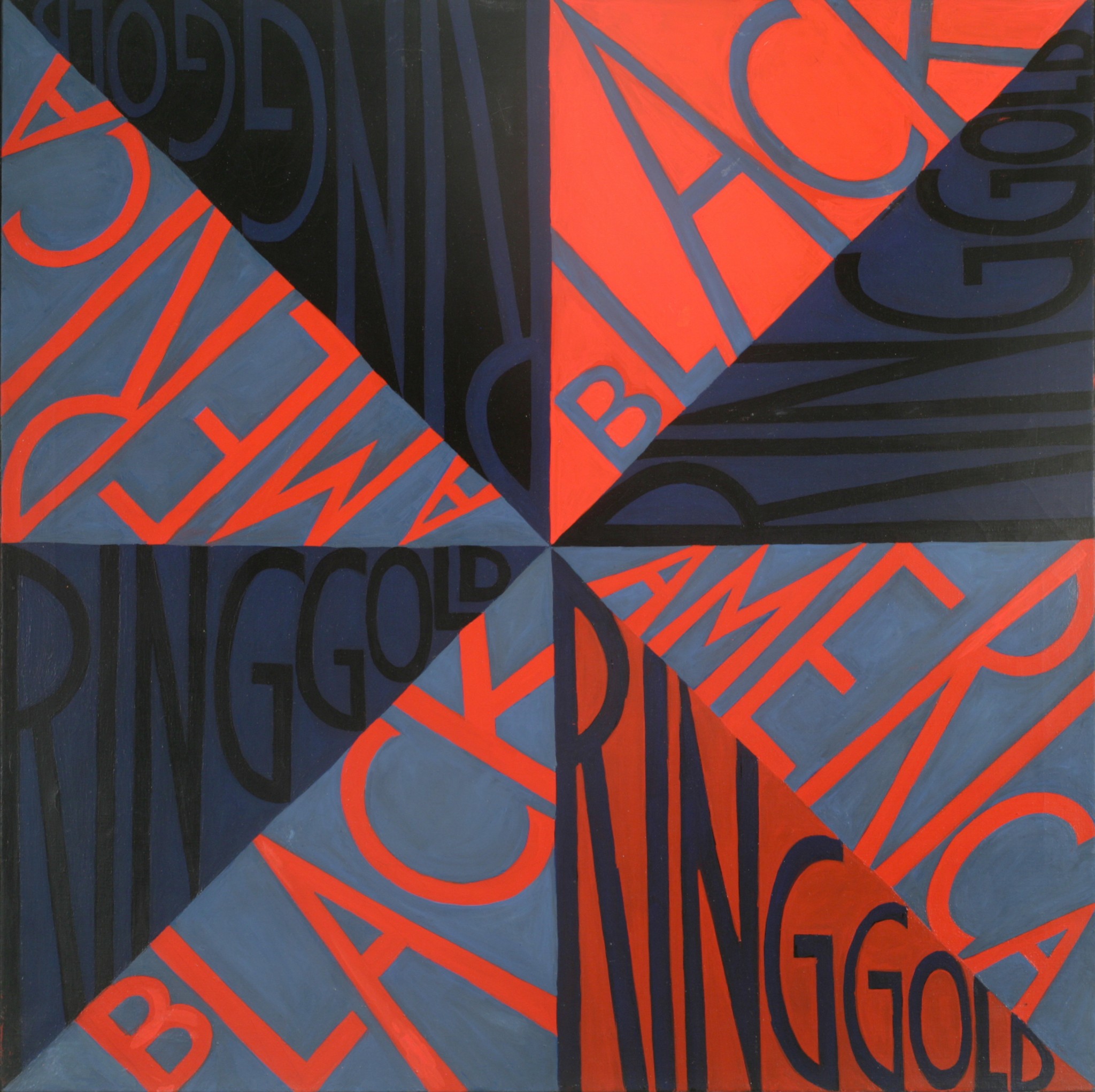 ‘The work of artist Faith Ringgold (* 1930, Harlem, New York) is of exceptional contemporary significance and enjoys international recognition. Her achievements as an artist, teacher, and activist have received numerous honors, including 24 honorary doctorates. Her books have been awarded over 30 prestigious awards. Ringgold’s work is represented in all major museums in the United States. The Museum of Modern Art recently acquired the large-size work American People Series # 20: Die (1967), which was recently exhibited at the Tate Modern in London as part of the exhibition Soul of a Nation. ’ – ACA Galleries, Weiss Berlin 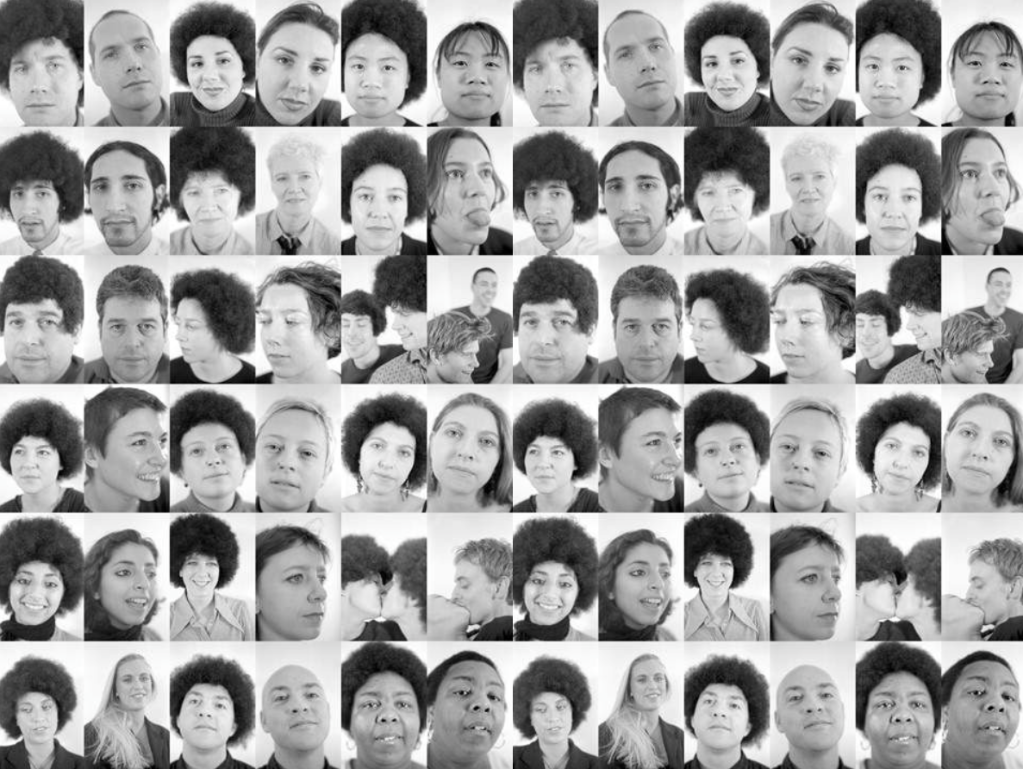 ‘Since the 1990s, Sonia Boyce’s practice has taken a multi-media and performative turn by bringing people together to express themselves in improvised ways. Central to her practice are questions about the production and reception of unexpected gestures, with an underlying emphasis on the intersection of personal and political subjectivities.’ 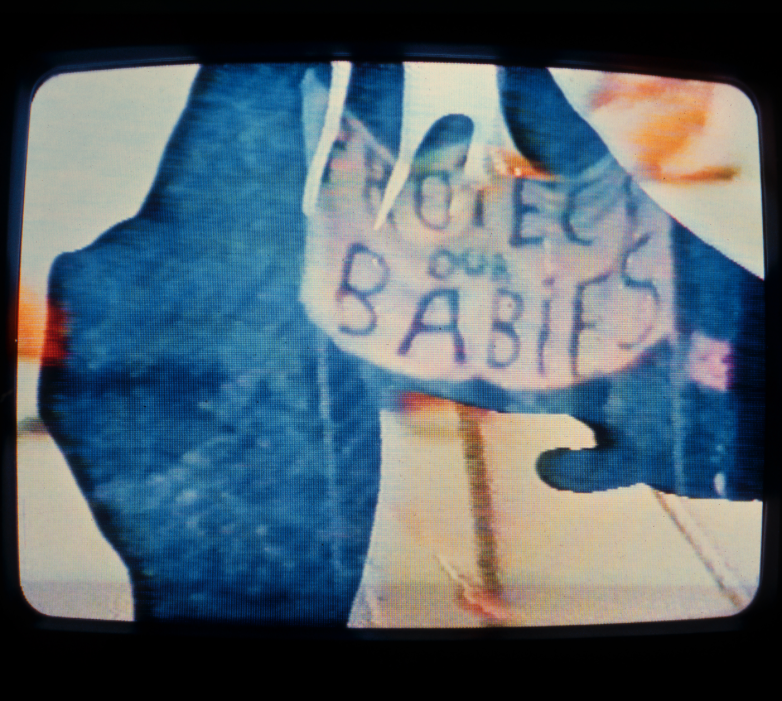 ‘An influential and consistently inventive artist, Keane is also renowned for media installation work that responds to a physical space: she constructed works around the use of light, using video monitors and neon, “opening up a dialogue between the perceptions of the viewer and the work itself” (Art Monthly). The writer and curator Guy Brett has described how her work is “a subtle intermingling of social issues, aesthetic pleasure, technical experimentation and structural organization, or form.”’ –England & Co., London 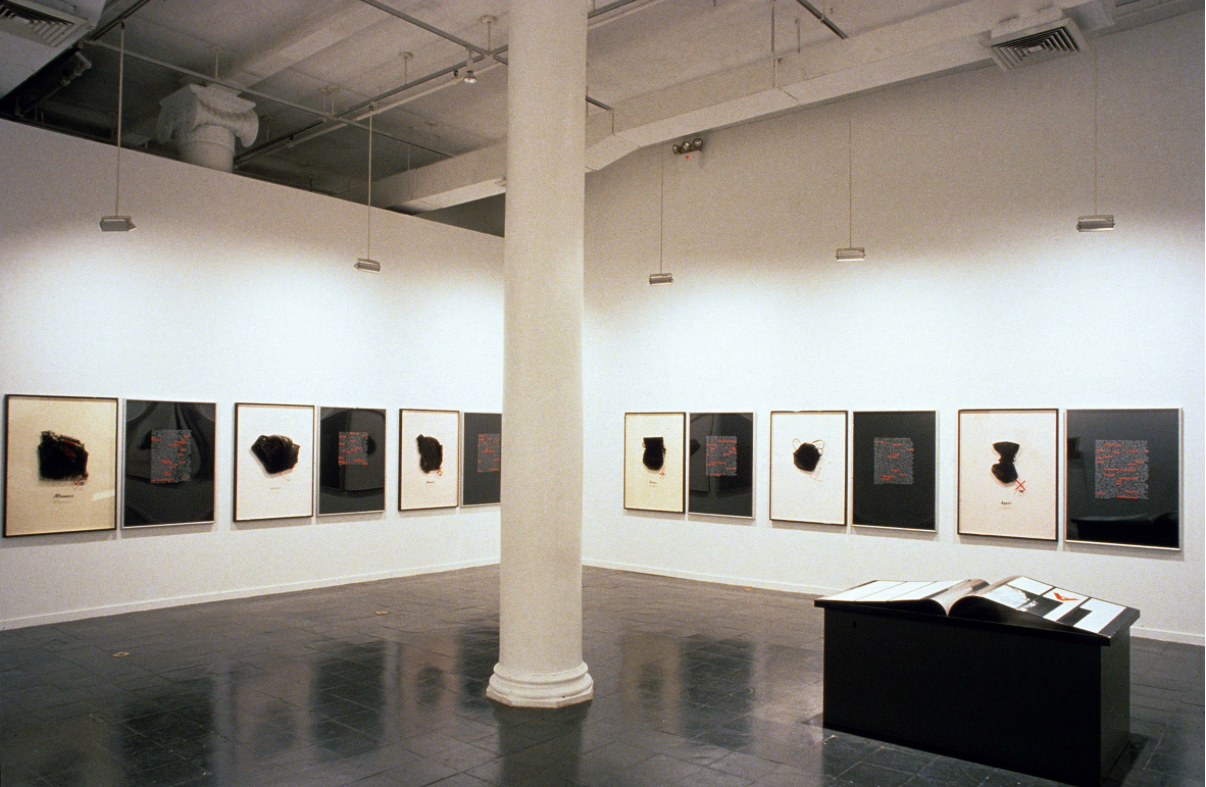 ‘In the words of art historian Amelia Jones, Kelly’s Corpus (1984-85) can be considered as ‘the single most important feminist artwork from the 1980s.’ The installation comprises 30 parts, 12 of which are on show at Frieze, and brings together images and texts highlighting the interim stage between maternity and old age. Kelly disrupts the notion of the body as being solely definitive of what it means to be a woman – either as a mother or as a desired object. By shifting the focus from looking to listening, Kelly gives voice to the unheard experiences, both physical and psychological, of women encountering middle age.’ 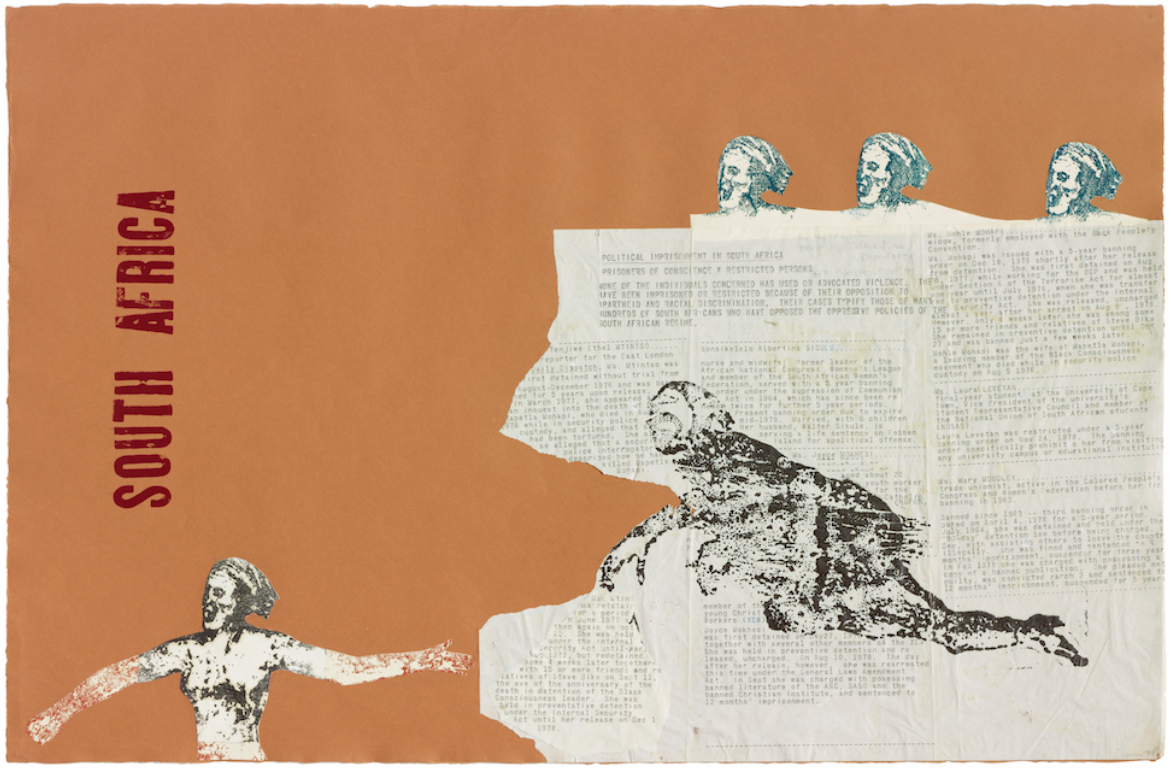 ‘In a groundbreaking career surpassing 50 years of practice and encompassing many significant visual and cultural movements including Conceptual Art, Post-Modernism, and Feminism, Nancy Spero made the female experience central to her art and challenged aesthetic and political conventions. Spero’s lexicon was derived from an immersion in the history of images, notably from Egypt, classical antiquity, pre-history, and contemporary news media. She combined, fractured, and repurposed found imagery and adopted text to comment on contemporary and historical events such as the monstrosities of the Vietnam War, extermination of Jews during the Holocaust, and torture of women in Chile. With raw intensity, Spero executed works on paper and installations that persist as unapologetic statements against the pervasive abuse of power, Western privilege, and male dominance. ‘ – Gallerie Lelong & Co., New York 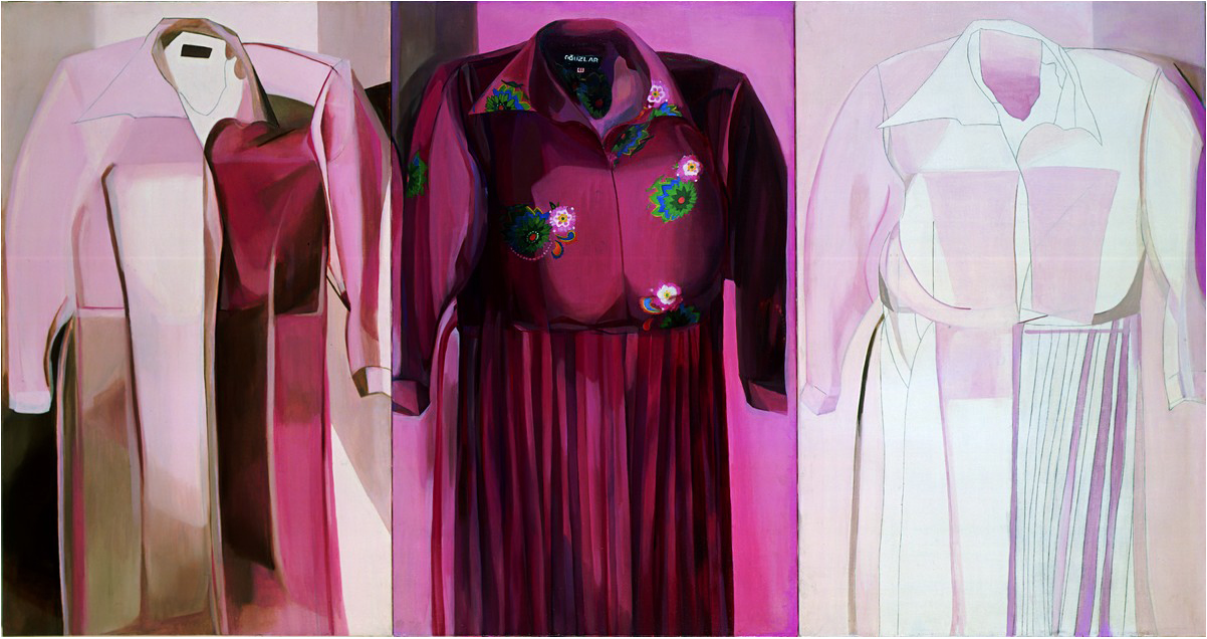 ‘Duben’s multimedia installations, paintings, artists’ books and videos focus on notions of memory, identity, gender and migration. Her interest in the outsider, the other has its early beginnings in Sherife (1981), a series of paintings representing the iconic image of an ordinary migrant woman from Anatolia in the nineteen-seventies in Turkey. Duben’s interest in identity and alienation continued in Manuscript 1994, an autobiographical non-narrative text and a poem presented as a multimedia installation. Here the artist focuses on her identity as a modern woman seeking a place for herself in an Islamic tradition.’-Pi Artworks, London 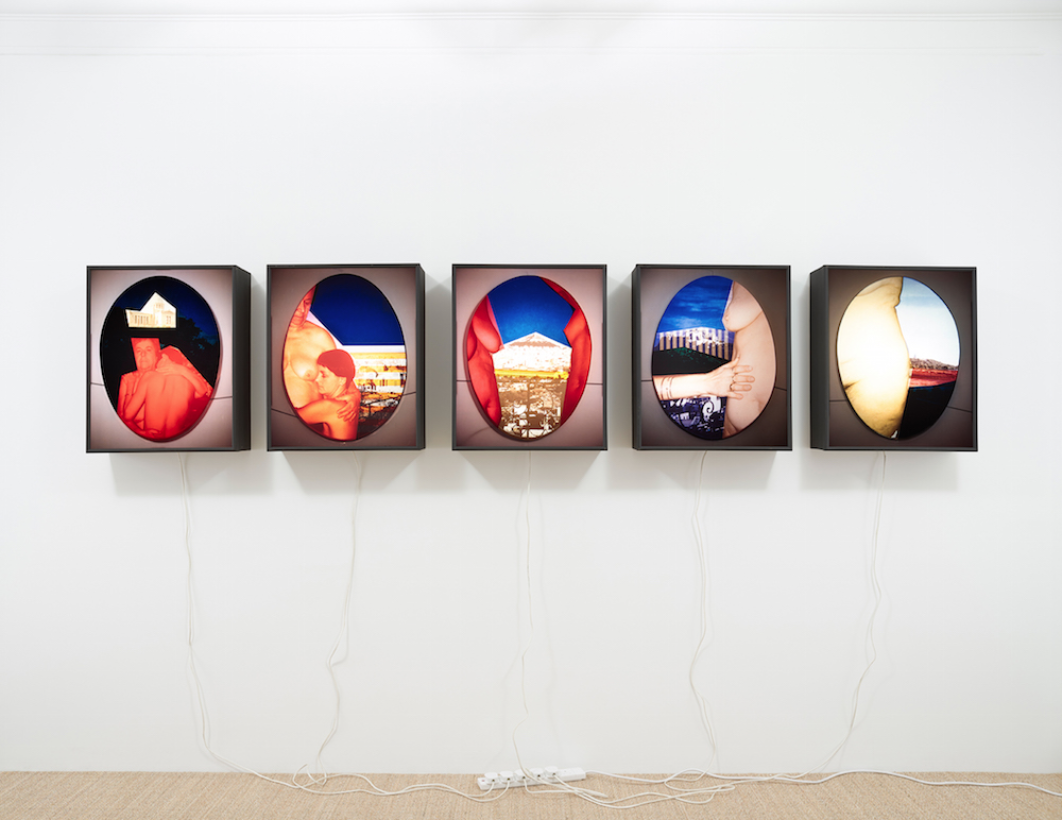 ‘British conceptual artist Helen Chadwick embraced the sensuous aspects of the natural world, breaking taboos of the “normal” and “traditional” in art historical pedagogy. Her influence upon a young generation of British artists was cemented through her teaching posts at the Royal College of Art, Chelsea School of Art and the London Institute. Her experiments with material were innovative and unconventional and captured a world in a state of flux. ‘ – Richard Saltoun Gallery, London 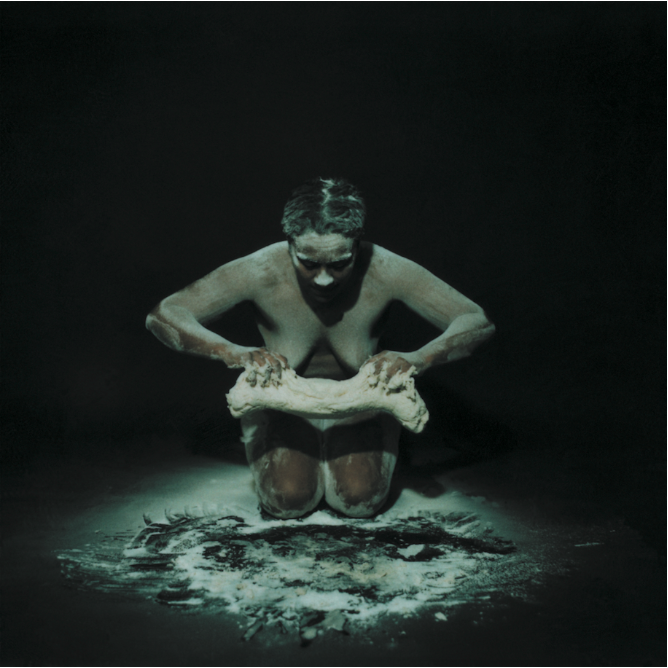 ‘Berni Searle explores the ways in which history and geography map onto the human body. Her influence is deeply felt in South Africa, where a whole generation of artists, including Athi-Patra Ruga, Mohau Modisakeng, Zanele Muholi and Nandipha Mntambo, share a common lineage in Searle’s staged photography and video work.

Still consists of a sequence of eight semi-transparent photographs, suspended in a square; these depict the artist kneeling, covered in flour, in the process of kneading dough. The installation is illuminated by a central light source, and a thin layer of flour on the floor mirrors the images, showing traces of a body. The white flour on Searle’s skin sharpens one’s awareness of skin colour, while the labour of preparing dough highlights gender – both loaded subjects in South Africa’s fraught history. In the end, the ritualistic nature of the action offers a space for reflection and, perhaps, even healing.’

Collaborations such as ‘Social Work’ are built into Frieze London in order to look at and explore contemporary issues, such as the lack of women, or lack of their visibility, in the art market or the hidden mechanisms of communication, control and privilege that are inherent in the current system. All this achieved alongside the endorsement and potential of a space built for creativity and discovery.

Jo Stella-Sawicka, (Artistic Director, Frieze London) said: ‘Frieze London programming evolves this year, shaped by new curators and urgent political realities. 100 years since women gained the vote in the UK, Frieze London will use its international platform to respond to the fact that women artists are still under-represented in the art world and especially the market. It’s been an honour to collaborate with 10 of the country’s leading minds on the subject, to shape this year’s themed section, Social Work. It’s also very exciting to welcome Diana Campbell Betancourt’s new vision for the Frieze Artist Award, Live and Film. Following her celebrated programming in Dhaka and Manila, she will open up new possibilities for experimental performance with galleries, and commission new work which is exciting, thought-provoking and important.’ 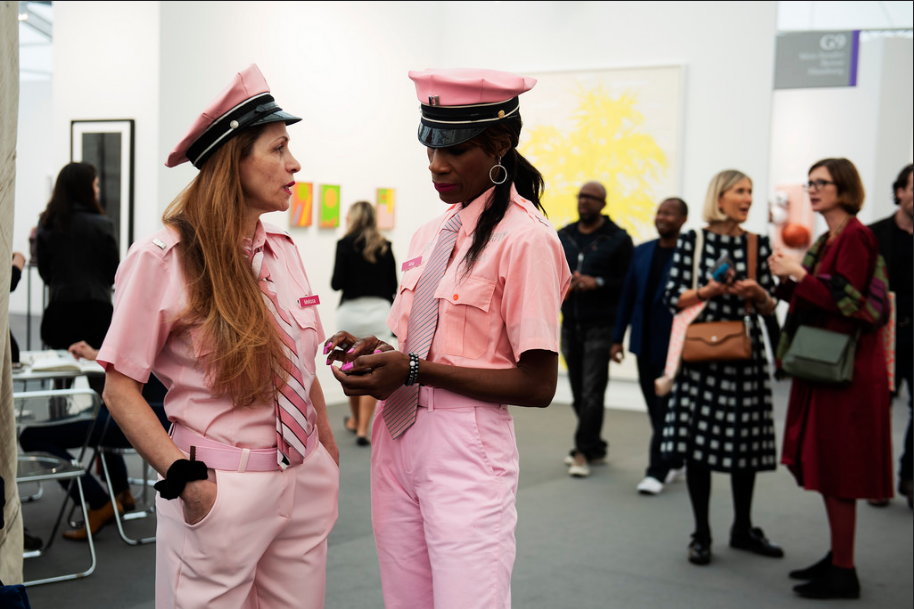 ‘Thinking about the world we’re living in now I was reminded of this command in microsoft excel where if you hit the Ctrl button and the tilde button it will unlock all of the formulas inside your sheet. I was thinking, what would the world be like if we could just have a control tilde? I engaged with artists who are able to unlock some of these systems.’ – Diana Campbell Betancourt, Curator of Frieze Projects

Frieze Live is a fascinating programme that brings performative, interruptive works to the fair which are designed to encourage visitors to challenge their perceptions of the event, hopefully unlocking broader forms of critical thinking. Diana Campbell Betancourt has brought together thirteen artists and collectives whose work will bring awareness to complex and embedded systems by highlighting the flow of money within the art world, how democracy functions, the impacts of colonialism, the relationships between gender and visibility, and the tensions between intimate data, the public and rumours. 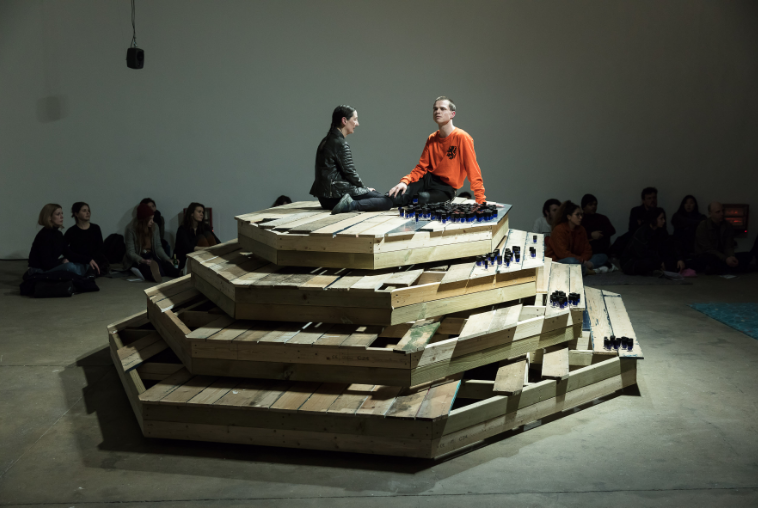 ‘The hole together’ part of The tremble, the symptom, the swell and the hole together, Alex Baczynski-Jenkins, 2017, Chisenhale Gallery, London. Photo: Mark Blower

Campbell Betancourt, said, ‘It is an honour to join the Frieze team. I know that Frieze London is a place that I never leave without discovering an emerging artist whom I want to work with. I appreciate how Frieze opens up experimental possibilities for artists and artworks that might not usually show in an established fair context to participate in their rich programming, speaking to how Frieze wants to be a part of developing contemporary art discourse and opportunities for artists, rather than simply serving as a marketplace. In this regard, I am especially excited about working on the Frieze Artist Award.’ 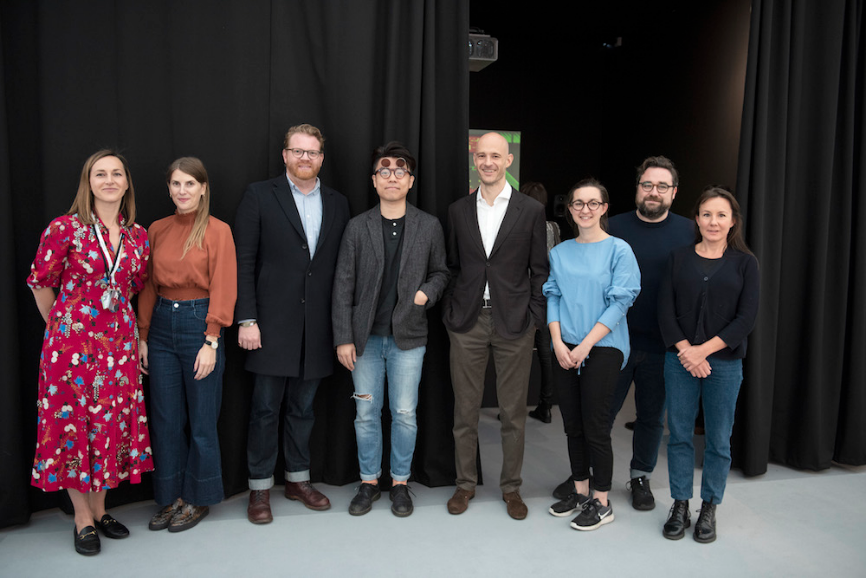 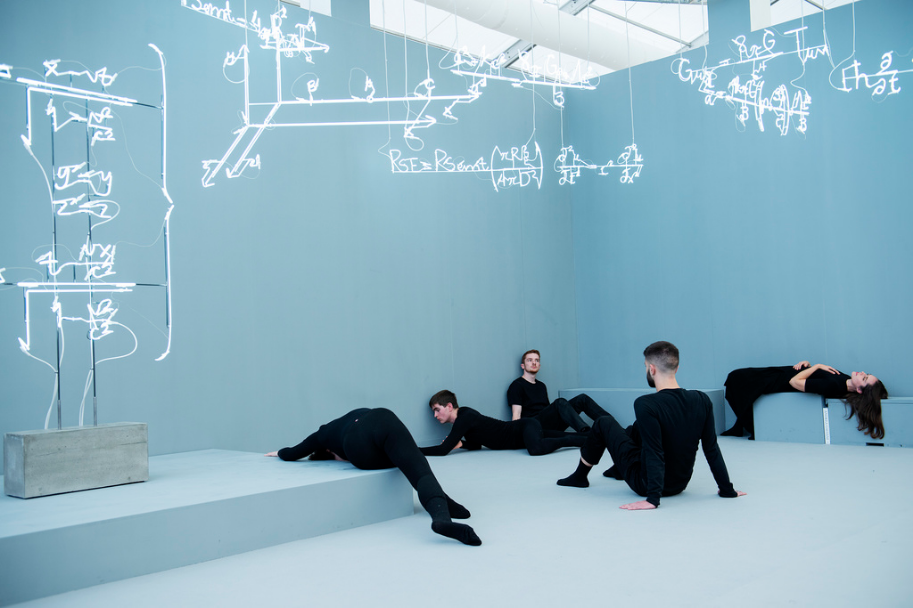