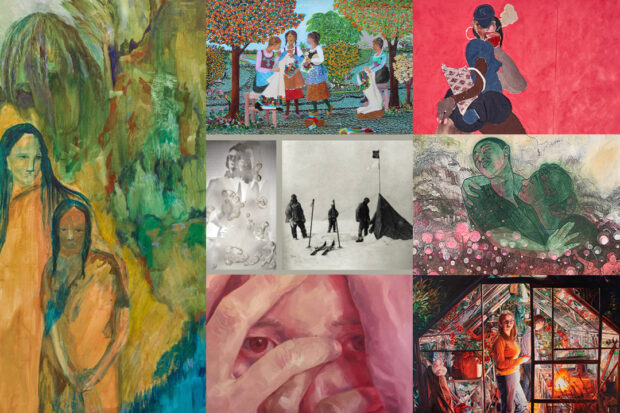 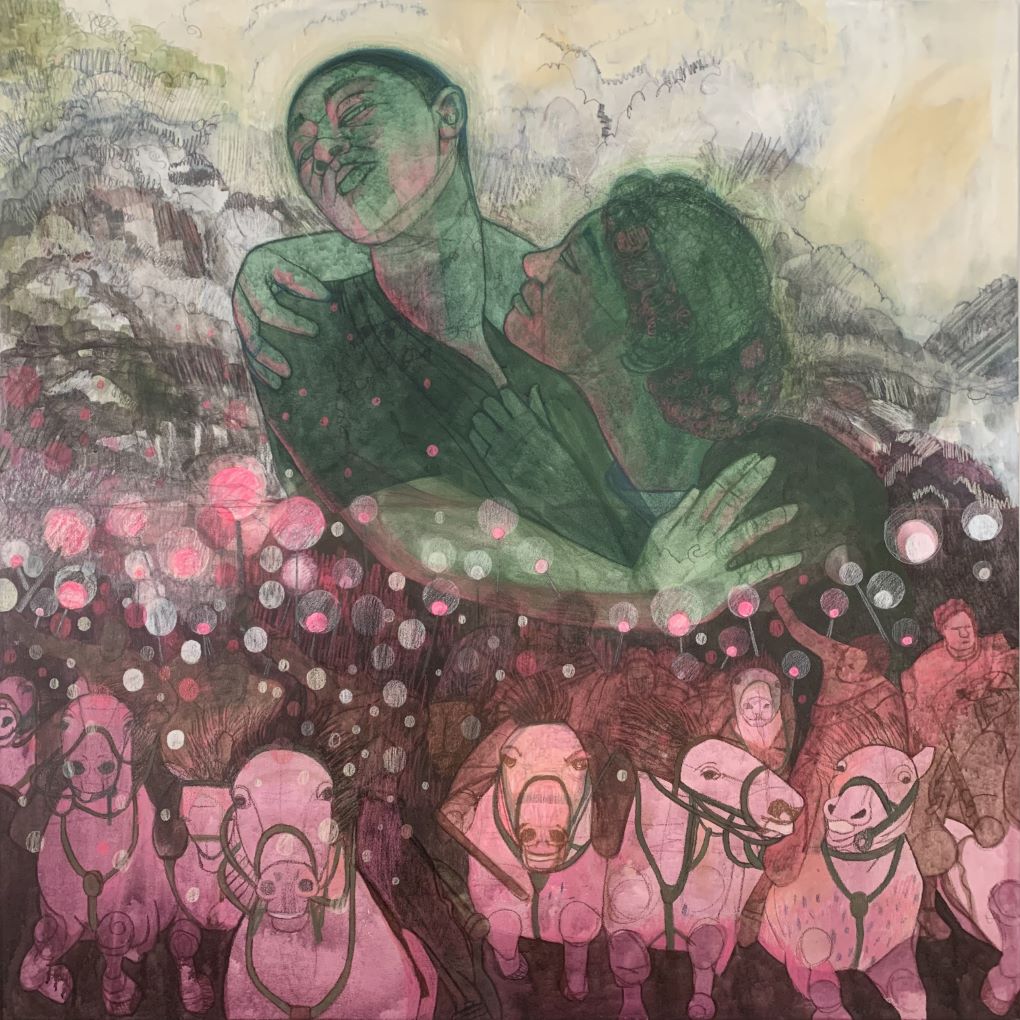 Pamela Phatsimo Sunstrum (b. 1980, Mochudi, Botswana) creates beautifully diaphanous imagery in a variety of media, including pencil, oil, watercolour, gouache and acrylic paint. The works reference dreams, mythology, historial paintings and personal memories, amalgamating layers of imagery to create emotive, autobiographical paintings. In Storm, Pamela Phatsimo Sunstrum portrays a couple clearly in distress; the woman leans towards her lover in a state of longing while he tries to push away, while behind them turbulent clouds dance around a mountain range, and a surge of people on horseback race towards us. The effect is filmic and mysterious, the muted colours somehow infuse the dramatic imagery with a sense of distance and romance.

“When I draw I feel I am making a contract between my mind, my hand, the tool, the surface, this moment, your eyes, your mind, the world, and ultimately the whole universe. In this way, the labour, the intention, and the politics of the body making a drawing become inextricable from the drawing itself.

And what, then, is the importance of drawing today? What a question to ask at a time like this! What a thing to be doing in these heaving, charging, and thunderous days of great reckoning! But I think it is precisely in these times of great change that drawing is a language that makes particular sense. Drawing– whether as observational or fantastical representation, as diagram, as script or text, as game-plan or other schemata– often appears at moments of great instability. Moments much like the one we are all standing in together right now. Moments so unstable it is easy to feel that all of our work, our entire legacy can, without warning, become forcibly un-finished. Drawing, with all its provisionalities and temporality, seems a medium most apt.”

(excerpt from a short essay by Pamela Phatsimo Sunstrum, titled “Drawing Urgency” for the University of North Carolina at Asheville) 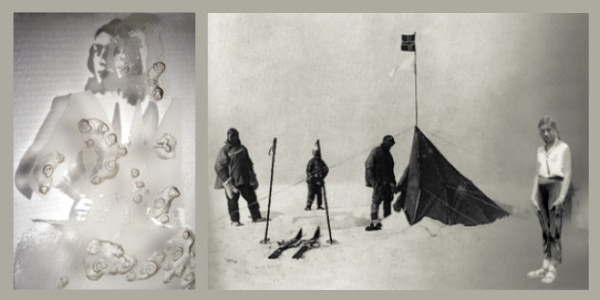 Images from From the Pages of an Unknown Explorer, 2008 by Judit Hesko

Judit Hersko is a Hungarian Installation artist, who represented Hungray at the Venice Biennale in 1997. Her work is primarily placed at the intersection between art and science, and she often works with scientists in order to create work that communicates the impact of climate change, integrating such concepts with storytelling and imagined narratives. In 2008 Judit Hersko participated in a residency in Antarctica, and created her work, Pages of the book of an Unknown Explorer. This performance lecture was delivered by the artist as if a presentation of fact, and comprised spoken word, collages, photographs and sculpture. Although rooted in scientific fact (concerning climate change in the Antarctic), the lecture incorporated a fictional tale of explorer Anna Schwartz, loosely based on the artist herself, who documents the welfare of two pelagic snails, named the Sea Angel and the Sea Butterfly. The shell of the sea butterfly dissolves under acidity levels already present in some parts of the oceans and since the Sea Angel’s only food source is the sea butterfly they are both threatened. The environmental as well as emotional impact of climate change are central to Hersko’s work, which draws parallels with the ephemeral nature of human emotions and memories, with the perpetual changes found across the natural world. 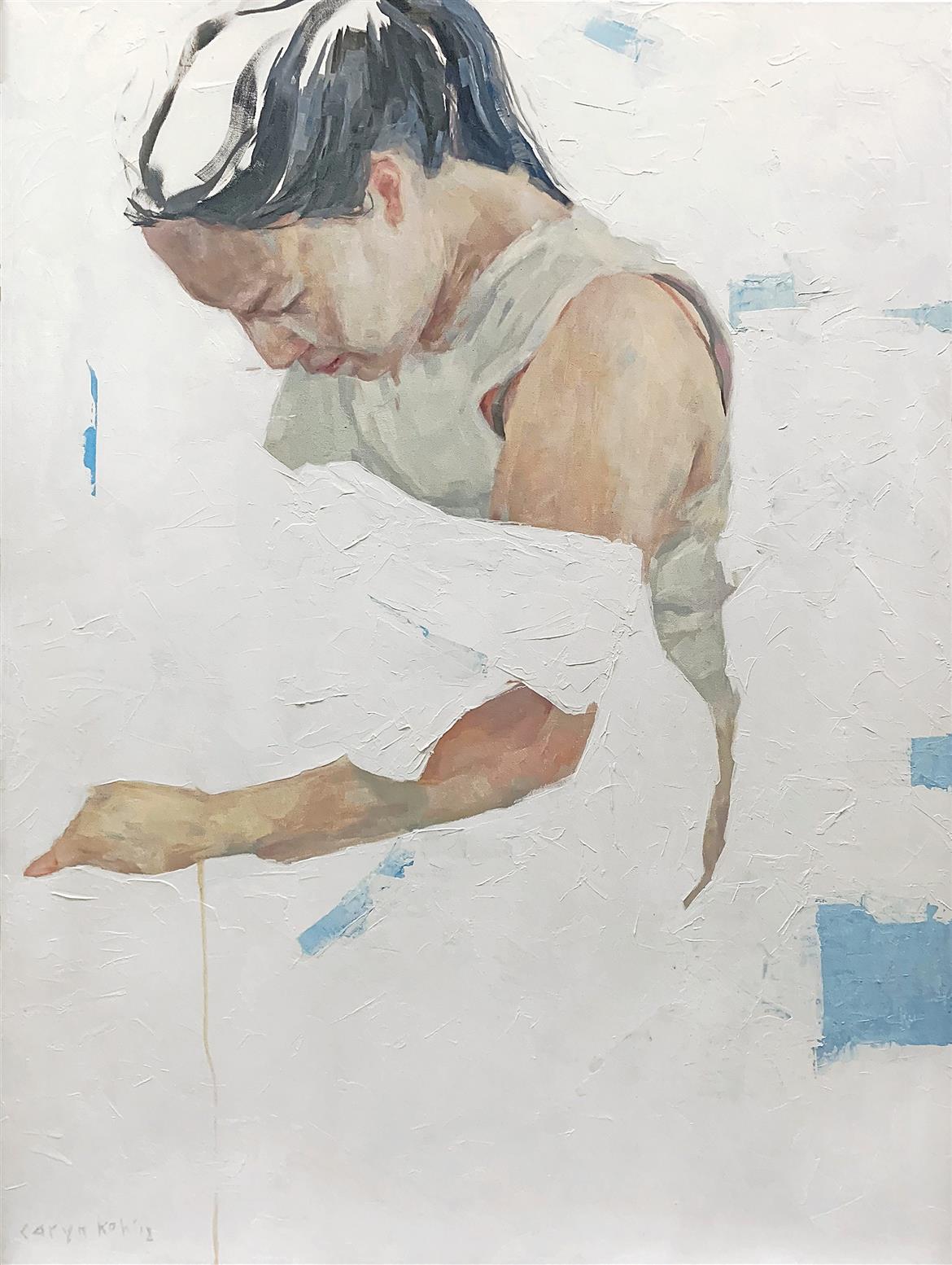 Caryn Koh (b. 1987, Kuala Lumpur) is a UK based painter whose practice is predominantly portraiture. A recurring theme within her work is the idea of the human mould; a desire to portray not only the physcial appearance of a subject but also capture their mental and psychological make up within each painting. Koh’s practice comprises painting, drawing, large-scale murals, installations, as well as audio and video pieces. In her work Cling, an evocation of tension and restriction is created with an ambiguous white texture that seems to lock the figure portrayed into position on the canvas. The ambiguity combines with the figure’s facial expression and pose, which hint at resignedness, sadness or desperation. Most recently Caryn Koh as created a series of work responding to her personal experience of lockdown, as well as participating in the Portraits for NHS Heroes project, images of which can be viewed on her website. 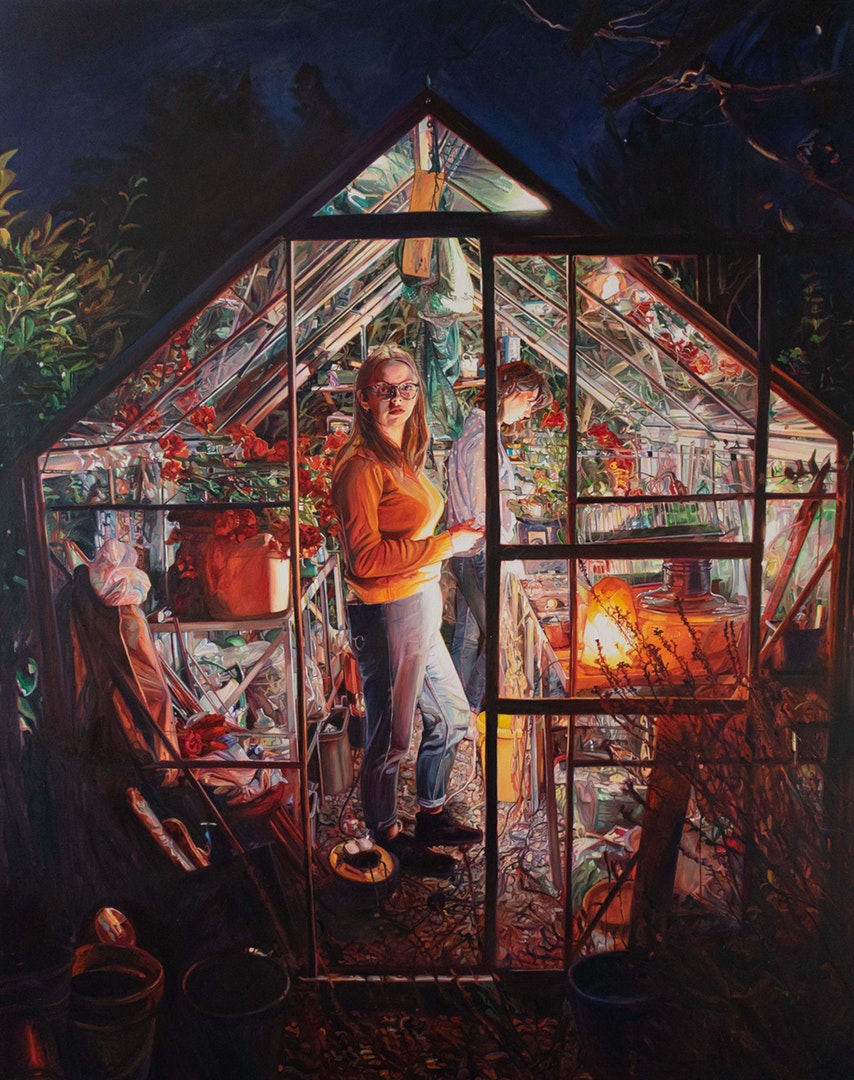 Ruth Murray (b. 1984, Birmingham) is a UK based figurative painter. Her work often starts as a result of an emotional response to a landscape or view. She stages scenes within such spaces, often placing women within them, creating compositions that at times feel voyeuristic, deliberately creating a sense of the protagonists of her work inhabiting a personal and private space. The resulting paintings are highly detailed and intricate, often with a sense of mystery and chiaroscuro that is evocative of both film stills and classical painting. In 2020 Ruth Murray won the Jackson’s Painting Prize and is an expert judge on this year’s panel. 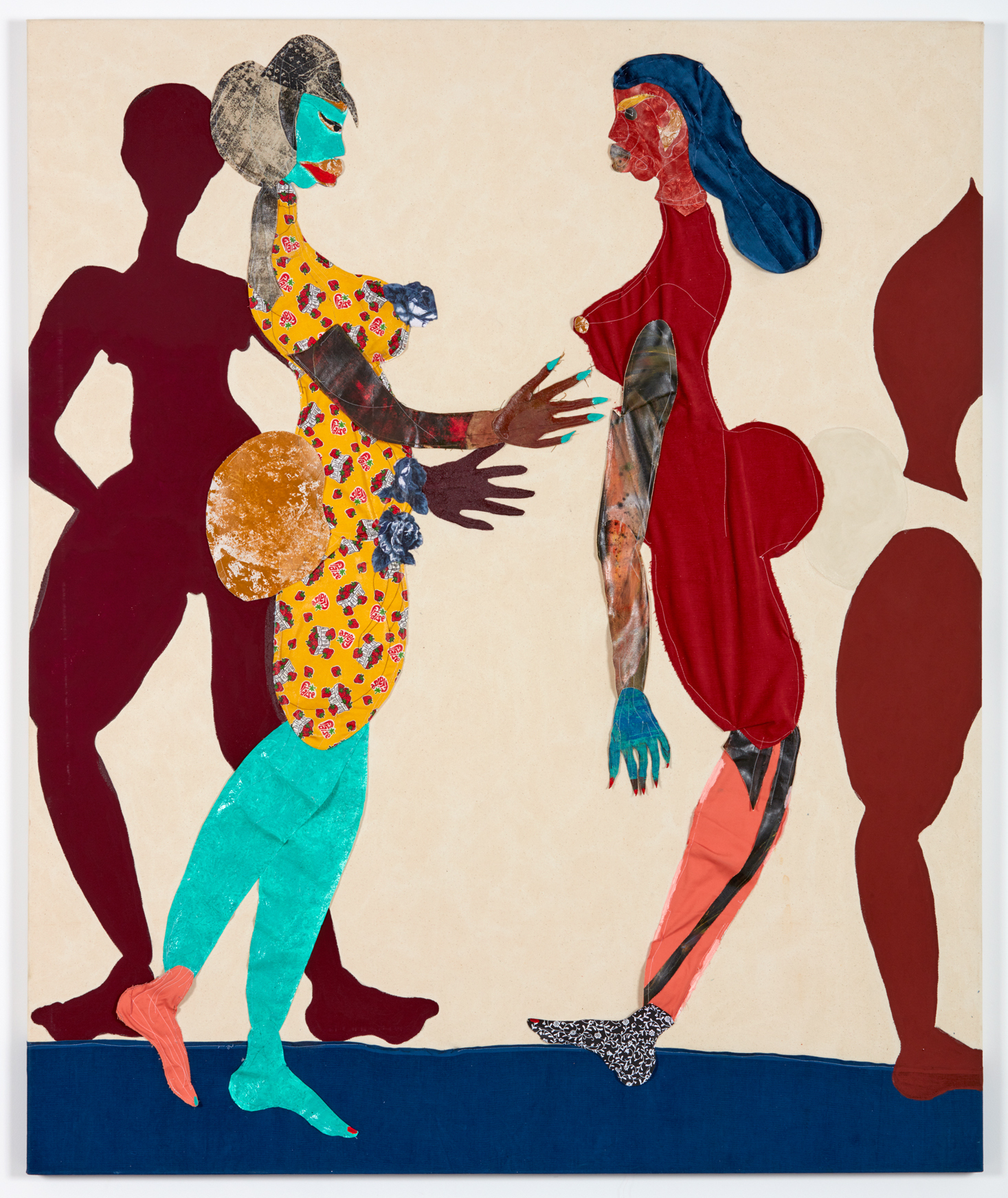 Tschabalala Self (b. 1990, Harlem, New York) is famed for her powerful depctions of black women. The paintings are made of patterned fabrics, sewing and paint – simultaneously shaking up the known stereotypes of black women and the notions of what painting is. Tschabalala Self is known to always start her work by drawing, with the intention of reclaiming the imagery associated with black women, empowering herself and the characters within her work, while also celebrating pattern, colour, fashion and culture.

“My current body of work is concerned with the iconographic significance of the Black female body in contemporary culture. My work explores the emotional, physical and psychological impact of the Black female body as icon, and is primarily devoted to examining the intersectionality of race, gender and sexuality. Collective fantasies surround the Black body, and have created a cultural niche in which exists our contemporary understanding of Black femininity. My practice is dedicated to naming this phenomenon.

The fantasies and attitudes surrounding the Black female body are both accepted and rejected within my practice, and through this disorientation, new possibilities arise. I am attempting to provide alternative, and perhaps fictional explanations for the voyeuristic tendencies towards the gendered and racialized body; a body which is both exalted and abject.

I aspire to hold space and create a cultural vacuum in which these bodies can exist for their own pleasure and self-realization. Free from other’s assertions and the othering gaze. I hope to correct misconceptions propagated within and projected upon the Black body. Multiplicity and possibility are essential to my practice and general philosophy. My subjects are fully aware of their conspicuousness and are unmoved by the viewer. Their role is not to show, explain, or perform but rather “to be.” In being, their presence is acknowledged and their significance felt. My project is committed to this exchange, for my own edification and for the edification of those who resemble me.”

Star Gossage (b. 1973, Otorohanga) is an artist whose practice consists of painting, theatre, silm-making, poetry and sculpture. Her colourful expressive paintings are at times reminiscent of European expressionsim, impressionism and surrealism, but also incorporate Maori concepts such as whānau and whakapapa. This fusion of influences echoes her own heritage, which is a mix of Ngati Manuhiri/Wai, Ngati Ruanui, French, English and Portuguese. Her great-great-grandfather Rahui Te Kiri was evicted by the British from island of Hauturu in 1896, and her Maori heritage is core to her work. The majority of her landscape paintings are inspired by the coastal landscape of rural Pakiri, which she renders in local clays and ochres blended with oil paints to create her distinct, earthy palette. The figures in her work are often portrayed as melancholic and distant, captured within naturalistic lands that have a dream-like quality to them. Star Gossage’s work received critical acclaim at the 2014 Auckland Art Gallery Toi o Tāmaki exhibition Five Maori Painters. 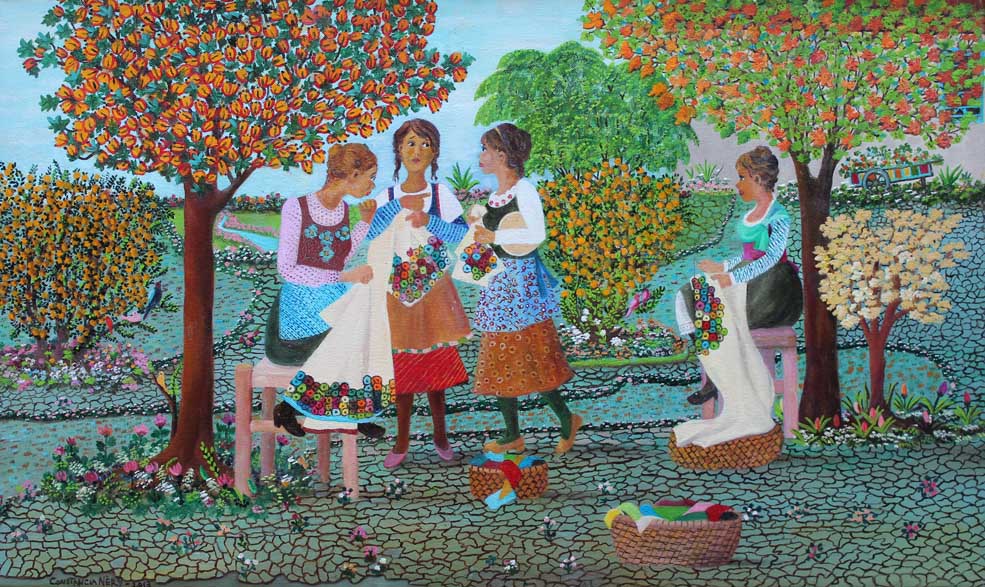 Constancia Nery (b. 1936, Ipigua, Sao Paolo) is one of today’s leading Latin American naïve art painters. Her paintings are distinctive as a result of their bright colours and highly patterened surface. The painting depict timeless scenes of ritual or everyday practices, such as weddings, fairground, fruit picking, dancing and embroidery. Often the figures portrayed are dressed in traditional clothing, and there is very little reference to contemporary culture. There is an illustratve quality to the figures, while surfaces such as grounds, clothing, and foliage are rendered in a Stanley Spencer-esque level of detail, revelling in pattern and colour. Often the compositions have a stage-like quality to them, although three dimensional in terms of perspective there is a simplification which almost has a sense of actors playing out a scene in front of a backdrop. Nery still works today, and now lives in Curitiba, Parana, Brazil.

Have you ever wished that your acrylic paint could