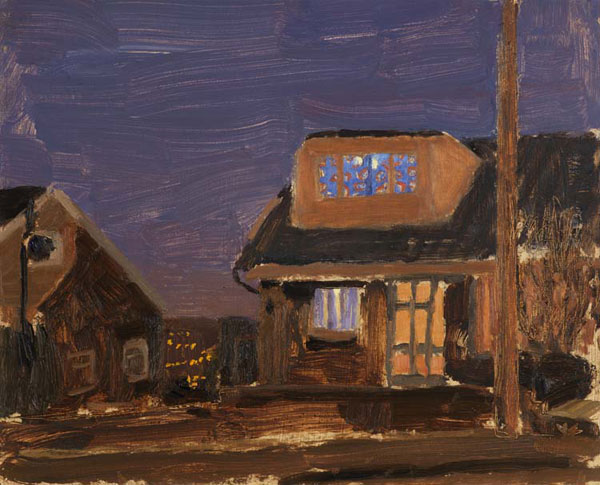 14th February 2014 by Lisa Takahashi  2
Danny Markey’s recent paintings celebrate the beauty of the modern day British landscape in all its splendour. By including the magic tree suspended in his car windscreen in the foreground of the painting, or a parked car that seems to occupy the centre of an urban landscape in what would normally be considered an obtrusive fashion, he shows us his world, and does so in a way that makes us re-evaluate all that is considered romantic and sublime about Britain.  Rather than paint pretty terraced Georgian houses, Danny Markey is more likely to select new builds and estates as his subject matter, and pays tribute to their homely, cosy and reassuring qualities.  Danny paints his pictures largely out of doors or from direct observation from his car, so I decided to email him to learn more about his practice. Danny Markey lives and works in Wales, has been an elected RWA since 2001 and is represented by The Redfern Gallery in London. 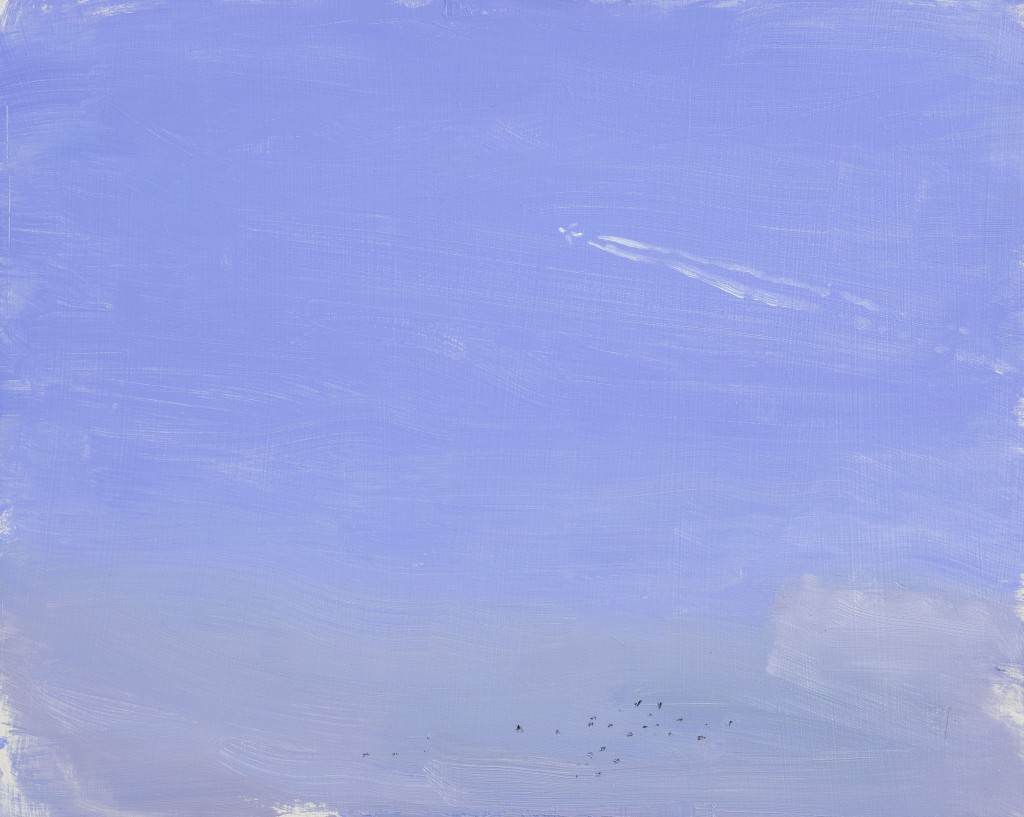 Lisa: Do you see your paintings following in the tradition of British landscape painting, or are you trying to capture something else in your work?

Danny: I live in Britain so that defines me and my subject matter. I don’t conciously think of a British tradition. I am just as interested in French outdoor painting as British. 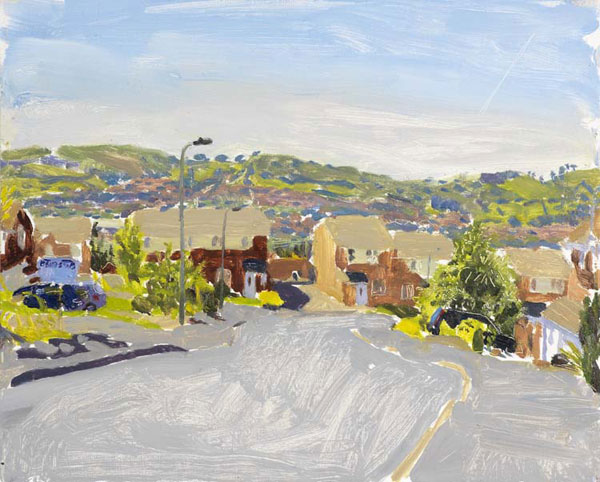 Lisa: What does a subject have to have in order to make you want to paint it?

Danny: The subjects choose me in a way. Some things out of the confusion of things I see everyday seem compelling. The urge to make paintings from them is compulsive.

Lisa: How do you prepare yourself for outdoor painting?

Danny: I will usually find subjects before I head out to paint. I always carry a pocket sketchbook. I will know the location time and weather before I go out to paint. If I am painting a night scene I will bring a little LED light that I can clip to my canvas, which allows me to see the canvas without the colours of the subject matter getting distorted. Musicians use the same lights to read their scores. I have a rucksack with all I need. I lay out my colours on site. I used to use a painting box but I now also use a large box easel for slower bigger paintings. 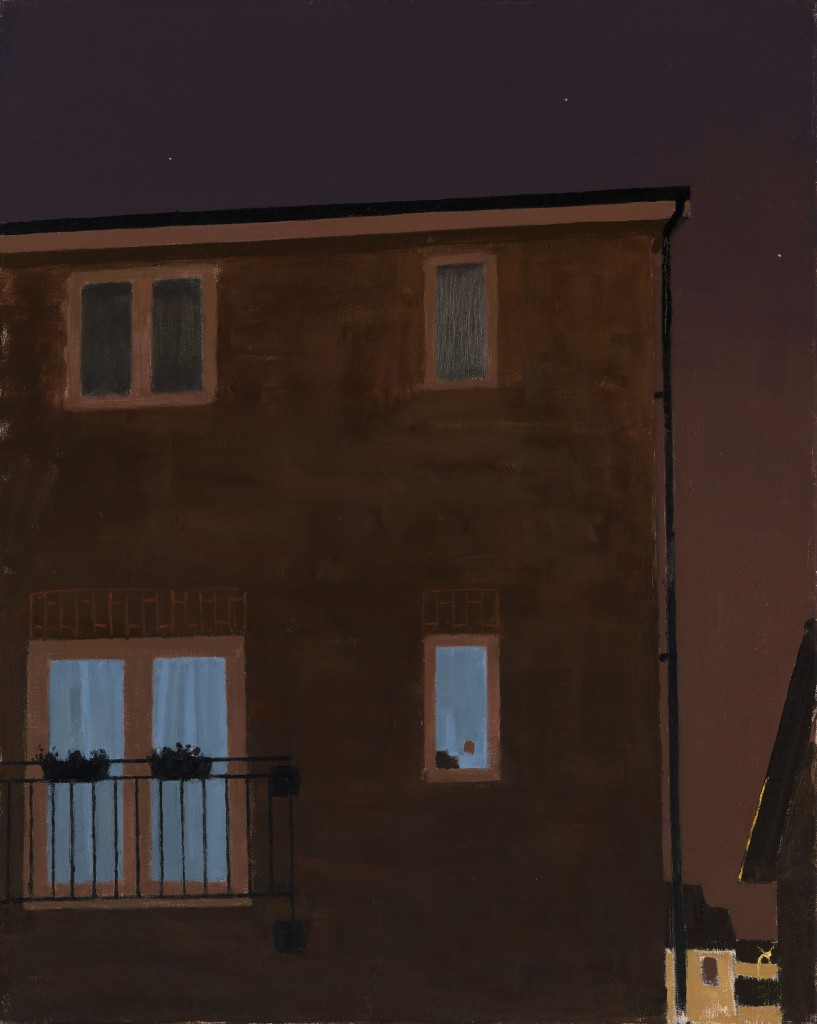 Lisa: Who are your favourite artists?

Danny: I love Richard Diebenkorn’s work and French painters such as Bonnard, Matisse, Marquet etc etc. I could make endless lists of artists. I am reading Titian’s biography at the moment. I love his late work particularly. I saw a wonderful show of Kossof’s paintings at Annely Juda Gallery including his recent drawings. I am very moved by his work.

Lisa: Why do you include the rear view mirror or the parked car when most other artists would ignore these and try and paint the beautiful landscape beyond without them?

Danny: Those paintings were done during a wet Cornish summer. People parked and looked out to sea. I thought it would be interesting to paint this all from my own car. I only had watercolours and it was too wet to work outside. It was clear to me that I should put the air freshener and mirrors in and I became interested in the scale of these against the infinite space beyond.

Lisa: Do you paint finished paintings out of doors or do you paint sketches to paint from in the studio?

Danny: Some paintings are almost entirely finished on the spot though I will hang onto them for a while before I am happy; usually making small changes over weeks and months or years. I will also use elements to make studio works that are a hybrid of memory drawings and outdoor paintings.

Lisa: Tell us about your relationship with colour. 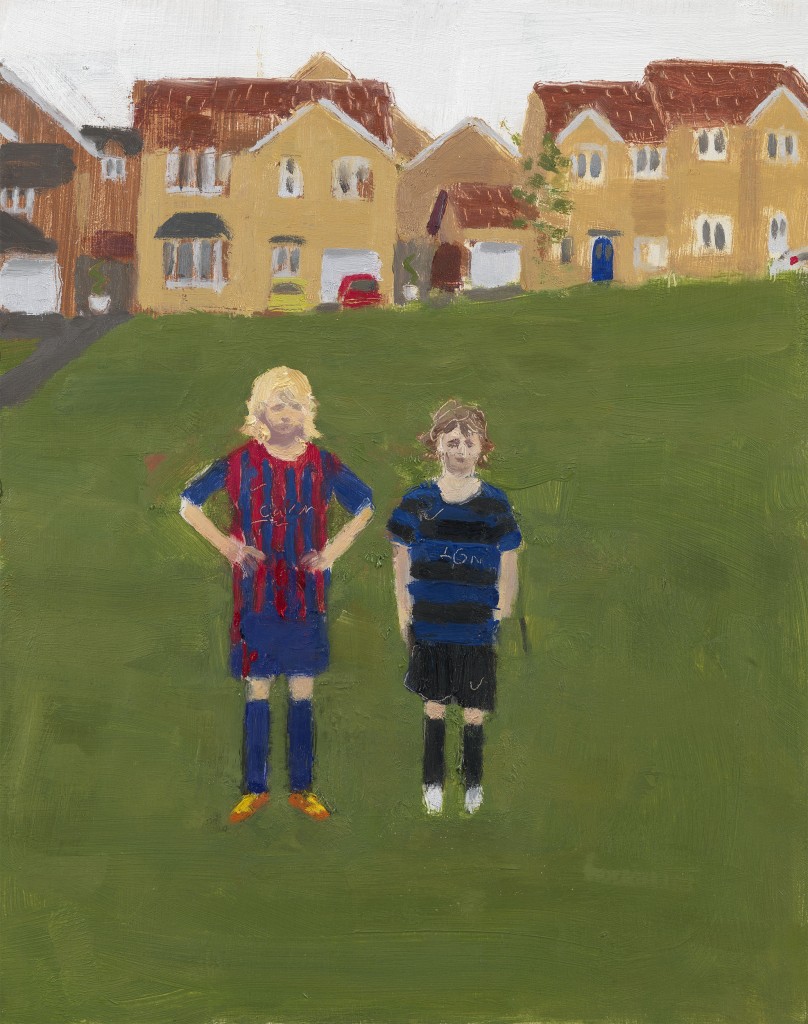 Danny: The colours I use are faithful to what I see. They are defined by subject choice. The choice is however a lot to do with the colours that appeal to me.

I am represented by The Redfern Gallery, but I also have work at The Royal West of England Academy, Beside The Wave Gallery, The Falmouth Museum and Art Gallery and The Old Jailhouse, Texas.

There is another fascinating interview with Danny Markey on the ‘Beside The Wave’ Gallery blog, which you can read here