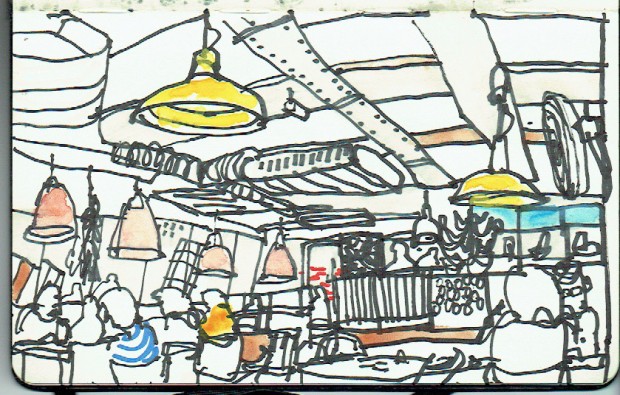 James Hobbs and his Urban Vision

Having lived in and loved London for the majority of my life, it is impossible for me not to love James Hobbs’ drawings. It’s not just the recognisable subject matter, it’s the energy of the drawn line, the vibrancy and excitement of the city coursing through every mark. These pictures tell so much more of London’s story than any photograph could. James is also the author of the brilliant book ‘Sketch Your World‘, a bible of hints and tips for sketching and drawing on location. We wanted to ask James Hobbs about his practice and the art of sketching one’s world.

James Hobbs: ‘View from a Train’, marker pen and acrylic on canvas

Lisa: For how long have you been sketching your world?

James: I photographed my world for a while – it’s what I originally wanted to do at art college – but I started drawing to get my foundation portfolio together and that’s what I find myself doing mostly now. I’ve carried a sketchbook around with me since 1984. I’ve filled more than 100, which sounds a lot, but it’s only about three or four a year. Despite the title of my book, Sketch Your World, I consider what I do is drawing rather than sketching. Sketching still sounds less than rigorous to me, a bit half hearted.

Lisa: How do you feel that sharing drawings on the internet benefits artists?

James: It’s what the internet was invented for. It’s so easy to share a drawing. It seems crazy to draw or paint and then not share at least some of it. And it is great to get an insight into what other people are doing and what they are using. What happened before the internet, or before the Urban Sketchers group sprang up? I had work in the odd show, but drawings all too easily ended up in a box in the dark somewhere. And then through the internet you find you’re just one of many thousands doing the same kind of thing. It brought people together, it turned us into a community. I like that I know people around the globe simply because they draw in a sketchbook. And of course the internet is a tool to help sell things without having to go through that traditional old gallery route. 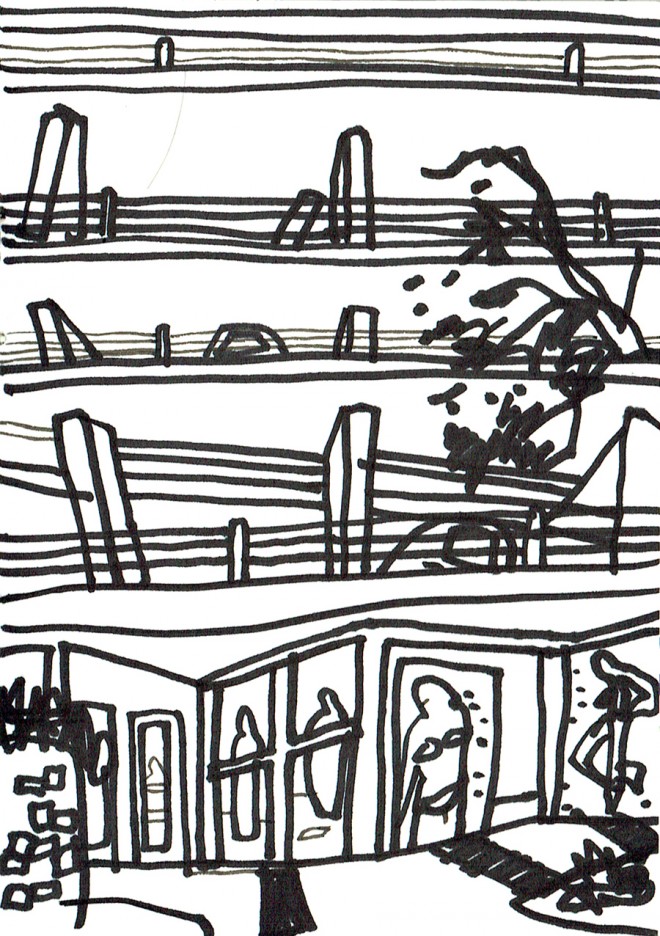 Lisa: Is a sketch ever a finished work of art or does it always lead into something else?

James: A drawing can be a finished work, yes. But I sometimes use drawings I’ve made in a sketchbook to make new drawings. Sometimes I scan them and make colour images that I sell as prints, which takes them in another direction. But yes, they can be a finished work of art. A lot of urban sketchers are architects, illustrators or designers who turn to drawing because they are working on computers all day. Whether we are aware of it or not, drawing can feed back into other creative things we do.

Drawing is so broad: going out with a sketchbook is just one element of what it can be about. Go to the Jerwood Drawing Prize show. I love how encompassing the word drawing is. 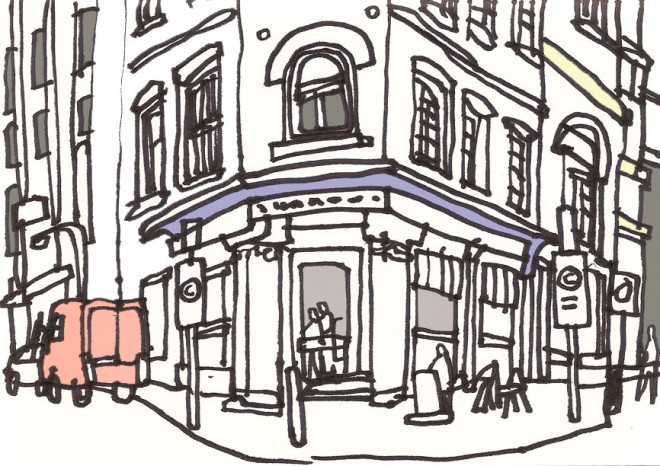 Lisa: What do you do if a sketch goes wrong?

James: I don’t really look at it in terms of right or wrong. Drawing for me is a continual process of deciding which elements aren’t working and then resolving them. Sometimes it comes to a better conclusion than at others, but it isn’t always easy for me to tell when things have been successful and when they haven’t. Leaving drawings for a few days before looking at them again helps to see them in a new light and with fresh eyes. I like a bit of wrongness in a drawing anyway, I like drawings that reveal some sort of grappling for control, or accidents that we never intended.

Lisa: How important is sketching today?

James: I think things such as the Big Draw and Worldwide Sketchcrawl have been great at opening up drawing to more people than ever. I don’t know how important it is. Drawing is always just there to be done and explored. In a way it’s like asking how important breathing is. Not that we’d die without it, but that for many people drawing is just a natural part of the way we go about experiencing and seeing things.

Lisa: What are the ingredients of a good sketch?

James: It can be all sorts of things. I had a tutor who once told me thoughtfully: “I think, James, that this painting has qualities that aren’t immediately apparent.” We all have different ideas about what makes a good drawing.

Lisa: What are your favourite sketching materials?

James: I’ve used all kinds: charcoal, pencils, acrylics, oil paint, watercolours and pens of all sorts. I like the simplicity of a sketchbook and pen. It’s so pared down, and it was just about possible to keep making things with them when the children were tiny and time was in shorter supply. I’ve been using a new fude fountain pen recently. That’s my latest favourite. But I love a good thick black marker pen.

Lisa: Which sketchers do you most admire and why?

James:In terms of drawings I like artists like Frank Auerbach, Cy Twombly, Roger Hilton, David Shrigley. Some of my favourites in the Urban Sketching community are Rolf Schroeter, Marina Grechanik and Swasky. And I’ve come across the work of Oscar Julve recently. There’s a narrative element, and there’s a loose, expressive element to all their work perhaps. 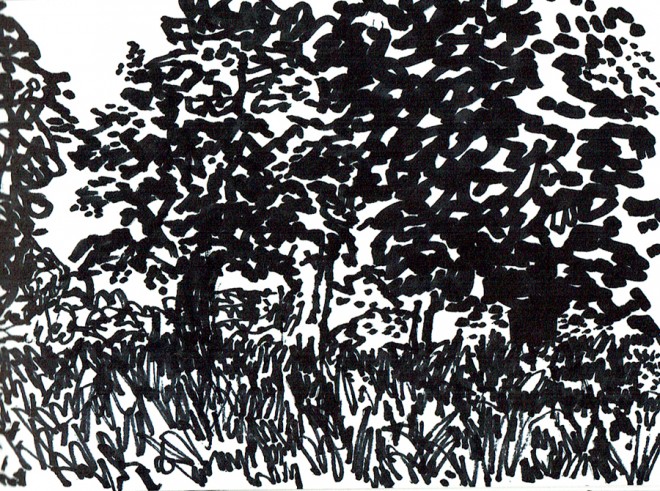 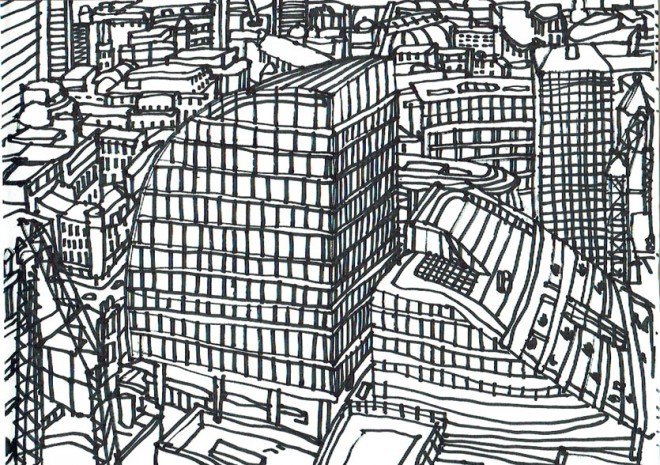