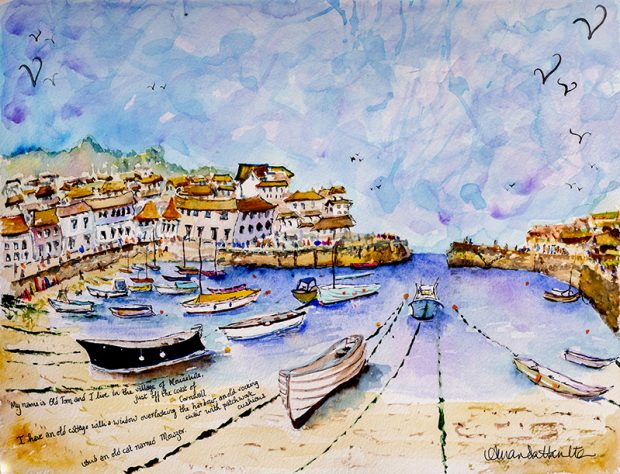 Vibrant and bold, British watercolourist Amanda Hamilton’s paintings are all at once playful and dreamy. It was in the early nineties that Hamilton first discovered her love of watercolours, while sailing in the Caribbean between the islands of St Lucia and Grenada. Since then, Hamilton has continued her exploration into watercolours, and her work has been exhibited internationally and featured in the likes of Vogue and World of Interiors. We sent Amanda a set of ShinHan Pass Watercolour & Gouache Hybrid to trial and hear her perspective on these premium and unique paints. 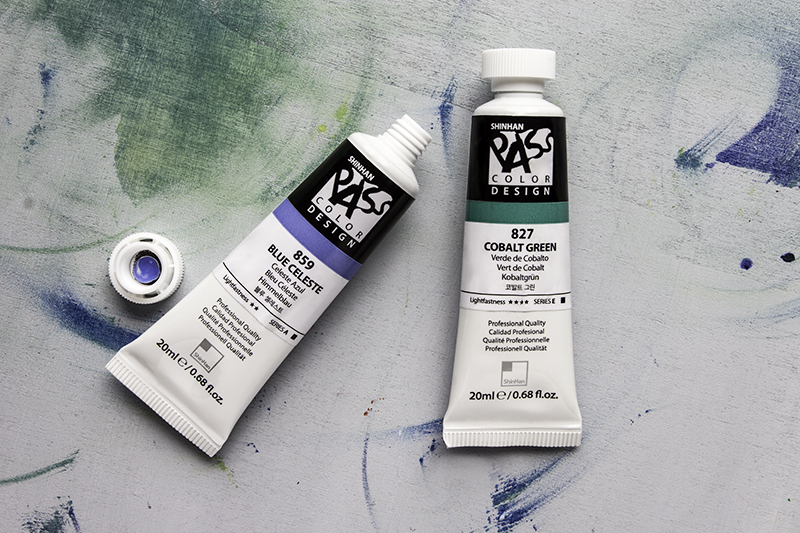 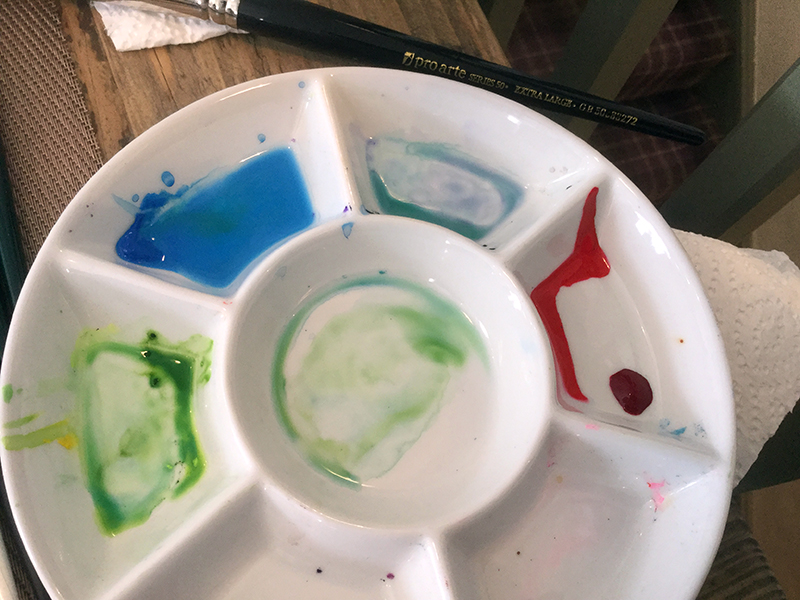 During this year’s Forest and Valleys Open Studios, I decided to trial the ShinHan Pass Hybrids in a painting of the National Trust Monnow Bridge. I’ve painted it before as a full feature portrait painting [artwork below], but I thought I’d explore it this time in profile, including the bridge and River Monnow. 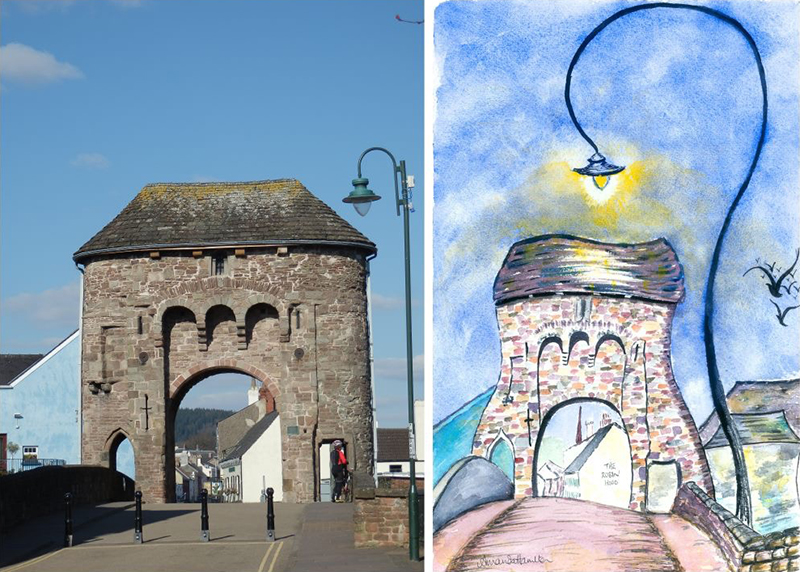 I’ve decided to create the sky and reflection using Heliotrope, Blue Celeste and a dense Cobalt Blue wash. It spreads well and creates a solid background to raise other colours into. I’m not positioned near a power point today so my usual hairdryer to speed things up isn’t an option. That means working all over the painting, so the final effect may be a bit scatty. On the other hand, it may be perfect! 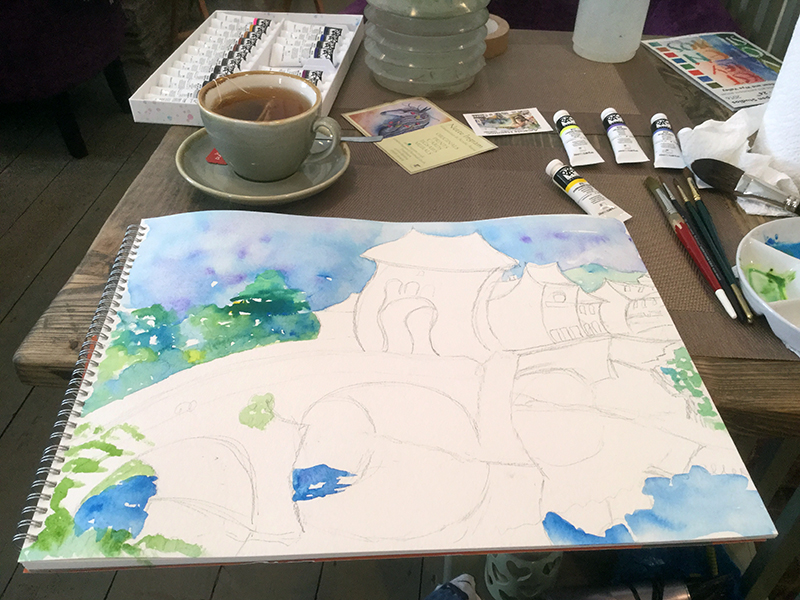 To build in a little foliage, I’ve stayed with the same three blues/purple and added Permanent Yellow and Lemon Yellow. I usually use Naples Yellow and Gamboge as my two favourite yellow mixes so this is a new colour schematic for me. I don’t mind the effect so far! Moving into the brickwork I’m going to introduce some Alizarin Crimson and Carmine. I don’t like how much water runs out of the tubes – when using a small ceramic mixing palette, it makes it hard to keep the colours separate. 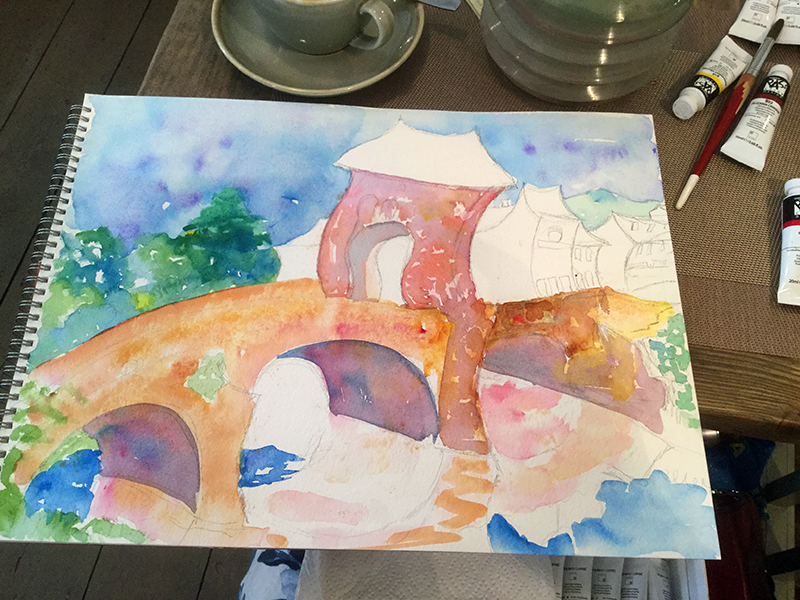 Well that was scary! These hybrids have an intensely rich tone to them, so initially I needed to dab out in order to make the colours not too overpowering. That said, I think I like the effect and am beginning to look forward to the end result. 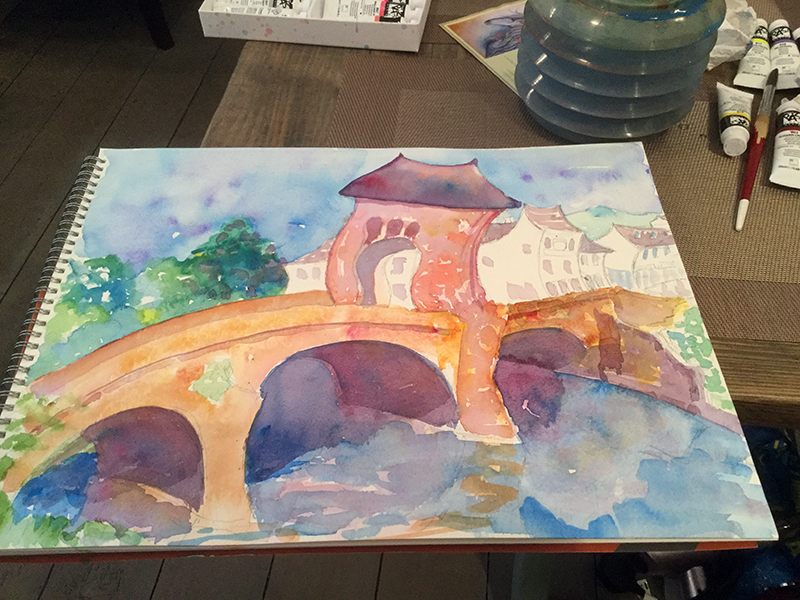 Painting in a hurry becomes exciting when working these “Quirky Quickies” as I can begin to see the basis of the painting now. I’m struggling with the fluidity and intensity of the colours but I’m getting very positive comments from the customers.

The cafe’s a little quieter now so I can get the hairdryer onto it before I go home. A few hours later: Developing the shadows and water reflections always brings the character of the painting through. I’m becoming less afraid of the intensity of the colours and adding more water to the mix, the painting is now beginning to take shape. 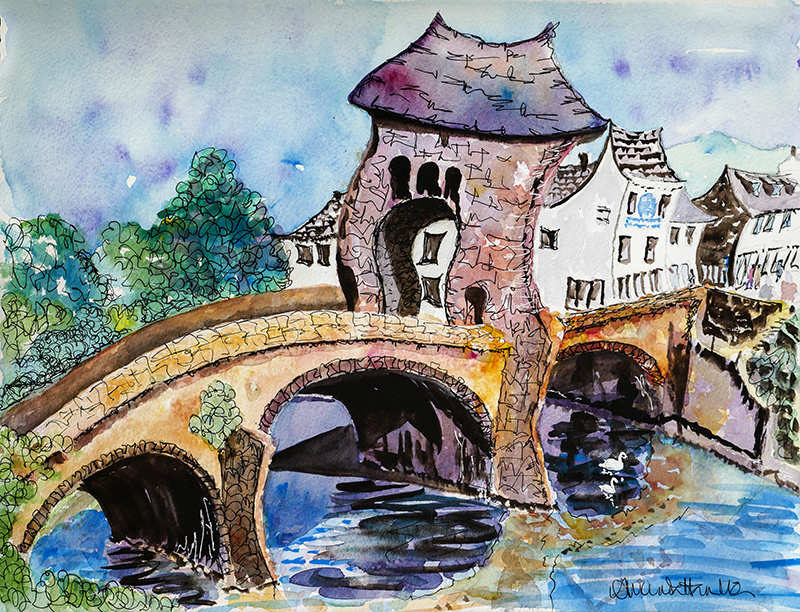 A few hours later and it’s time to step back from the piece and see what speaks to me. I still need to get the feel of the hybrids in a formal context. All in all, despite too many tubes offering mixtures of pigments which I’m not so keen on, and more browns than any self respecting artist would ever use (preferring to mix their own), I like the effect. It’s fresh, vital, filled with life and colour.

I then decided to experiment with a half pan of Carmine PR17 from the ShinHan Pass Watercolour and Gouache Paint Hybrid range, and compare it to Talens Gouache Carmine PR112 / PR23. Normally, I like working with pure pigment colours, but I wanted to do a comparison to get a feel for the hybrids and see how they move and behave with minimum water. 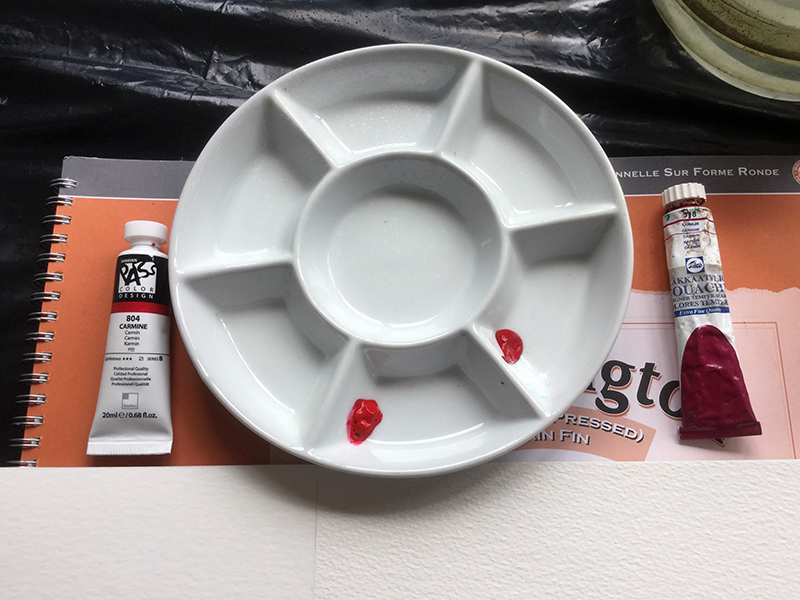 I am a bold watercolourist – most of my work is pretty vivid so I tend to favour gouache over solid half pans these days in order to capture the strong colours I like to use for commissions. I began by doing what I call in class a “50 Shades of Grey” exercise – but here it’s 5 shades of carmine. The right hand column is Talens Gouache Carmine, the left is the ShinHan Pass Hybrid Carmine. 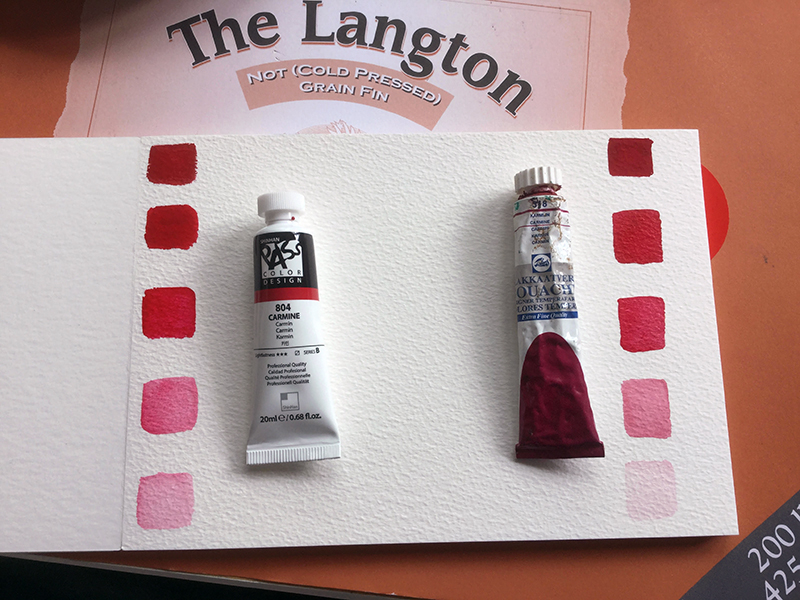 My first observation is that the Talens Gouache spreads more readily. There is a smoothness and no water is needed for the first colour block. When I came to work with the ShinHan Pass Hybrid, it was very noticeable that there is not just fluid in the tube, but also something chalky, granular, dry. So it took a little experimenting to feel into how much more water would be needed to create an even saturation of the pigment. I think I did pretty well! 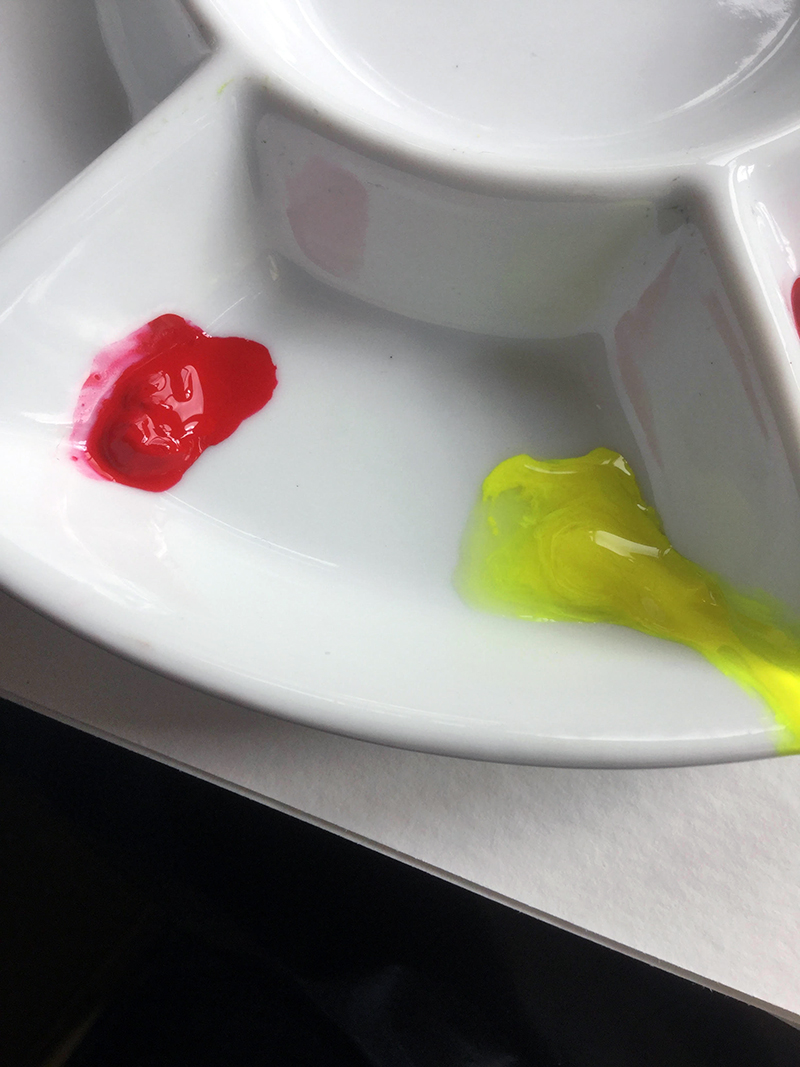 I then introduced two ShinHan Pass Hybrids: Lemon Yellow PY147 and Carmine to get a feel for how the two pigments mix without using any gouache at all. The Lemon Yellow had a lot of “ooze” before the actual pigment came out, which made the combination pretty runny. That said, it is lovely to paint with, if a little drier than I’m used to. 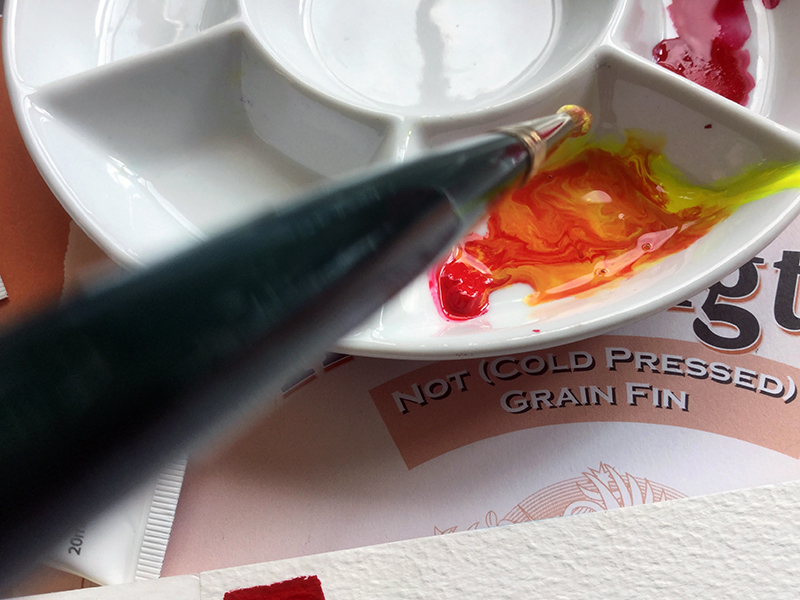 So I’ve been very abstract simply getting a feel for the texture and the blending properties of the paints. The colours are quick to blend, so mixing the paints on the paper worked better than in the pot. 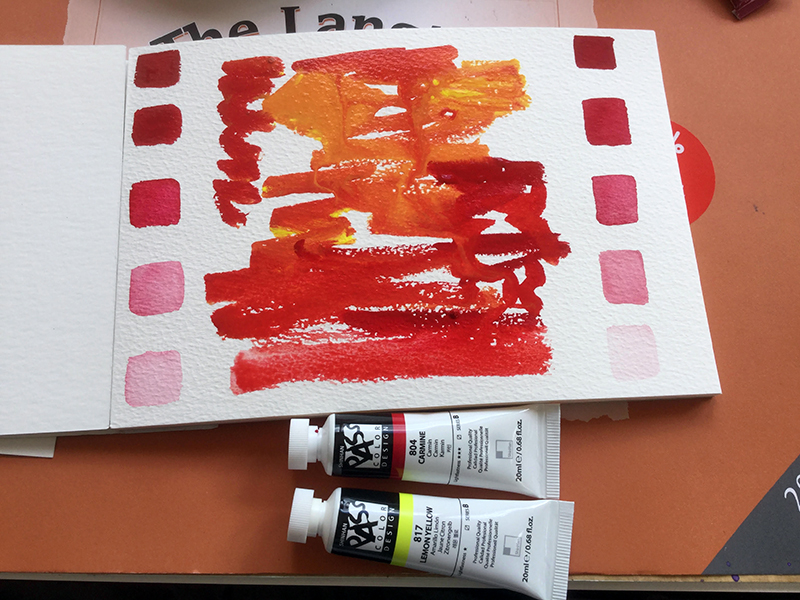 Once again, the ShinHan Pass Hybrid shows its nature of having a hidden dryness in the moisture and needed more water than I expected. It will take a bit of getting used to but I’m sure in time I will become a dab hand at it! My other observation is different tubes have different consistencies – some are very liquid, others very dry. 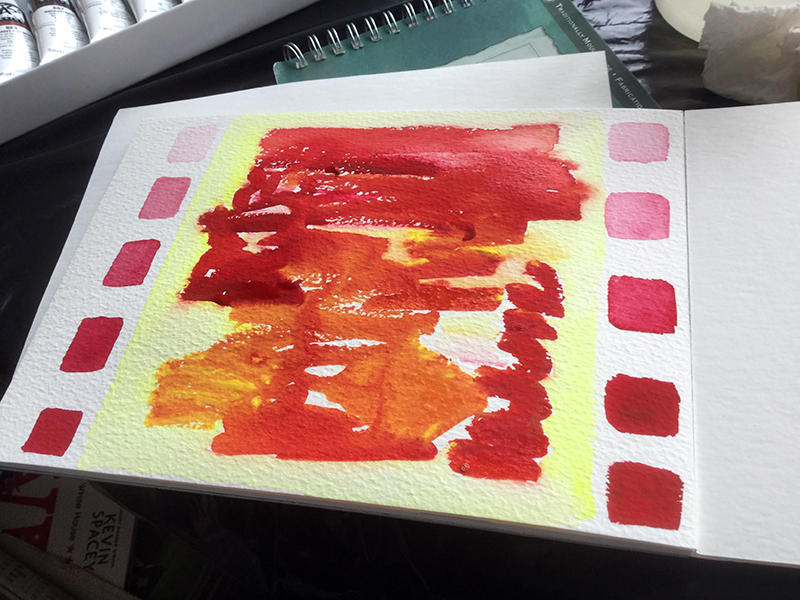 I then waited for the ‘Danger Zone’: I tried to run a yellow border around the edge with the paper still damp and with the paint not quite dry, to see how the hybrid would behave. It worked really well. With my gouache paints, I simply wouldn’t bother trying to do this – the painting would be destroyed. However, with the hybrid I found that there was very little run-off, which I see as a good thing. In order to create a blending, I had to add more water to the paper and then for sure a little run off happened, but had I stayed reasonably dry on the paper I think the yellow would have held its own pretty admirably.

Painting the village and fishing port of Mousehole in Cornwall 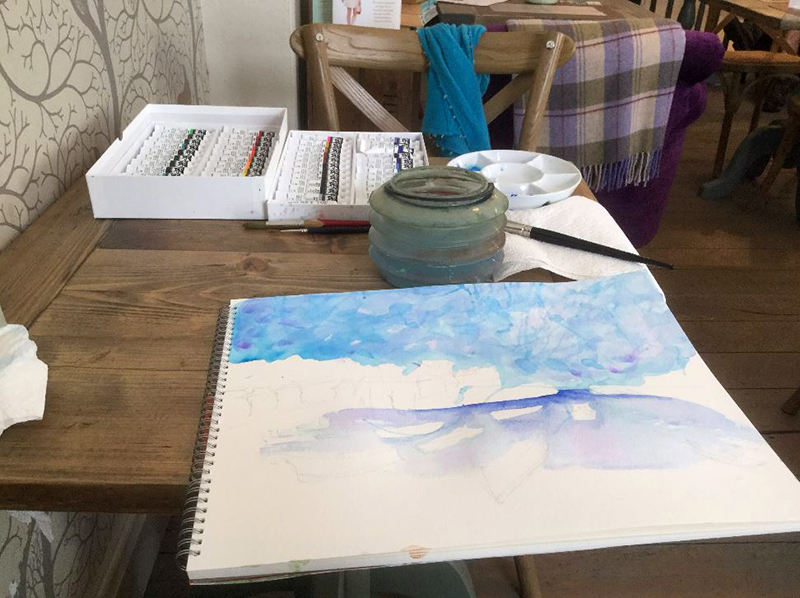 So I thought I’d have another experiment using only ShinHan Hybrids. My blues are Cerulean for the sky with Heliotrope mixed for texture, then Cerulean and Ultramarine for the harbour water and some Permanent Yellow to begin the sand and harbour wall. As always, too much comes out of the tube but I’m now learning to dot just a whisper into my palette. If you’re on a budget, I’d suggest keeping the tubes upright and using a brush to decant a small quantity. 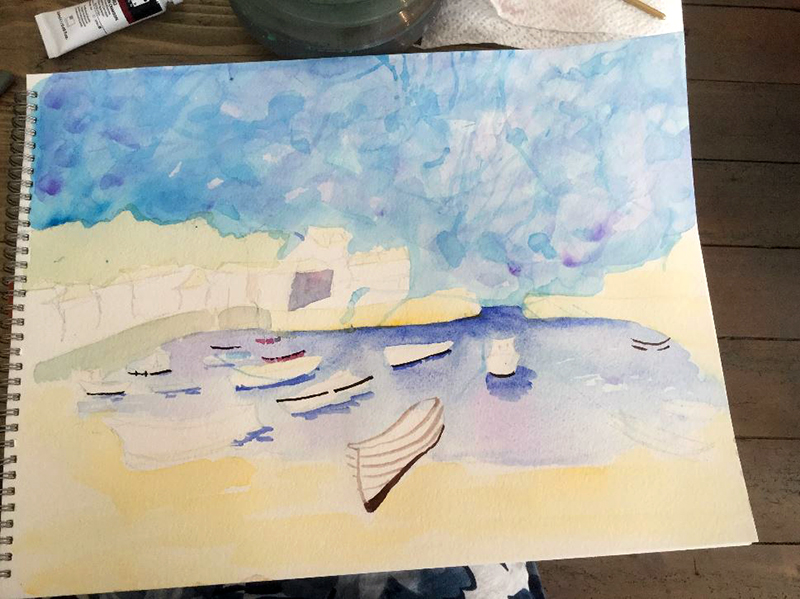 As I’m working quickly during this Forest and Valleys Open Studios week, I’m going right in there with deep shadows and boat shapes using Prussian Blue, Carmine Red and Vandyke Brown. I’m becoming more confident in the way the hybrids behave: you really do need to explore their intensity a lot to not overwhelm your work. 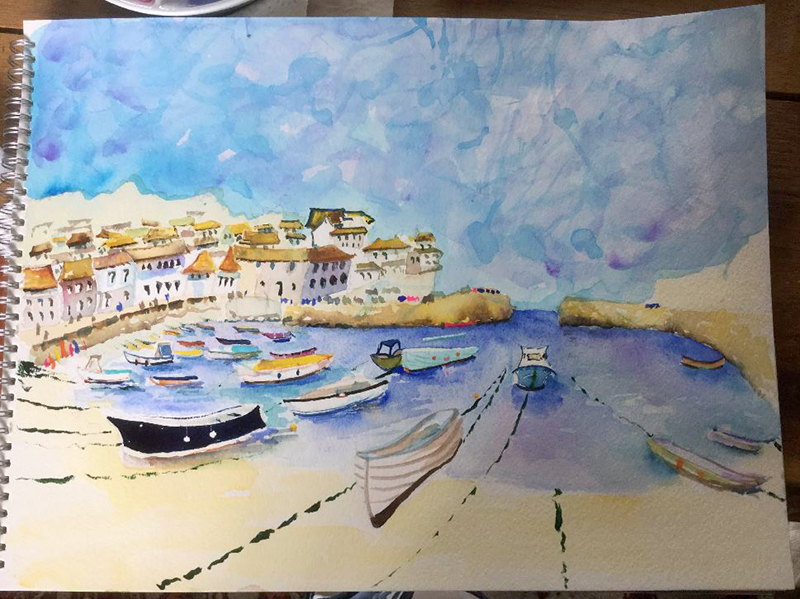 It’s fairly easy to loosen colours once dry with a damp brush and generally too much pigment can be lifted out with a wet brush and kitchen paper. I love this as I am not the kind of artist that pre-meditates too much, preferring the loose and unpredictable over planned and known.

The quantity of browns in the box that I have commented on before deserves some exploring, so I’ve dabbed a small amount of each in a palette and used these to generate my suggestion of Mousehole town and the harbour walls. I like the effect, although notice compared with pure gouache I do need to loosen the paste a little more even when seeking a dry textured took. 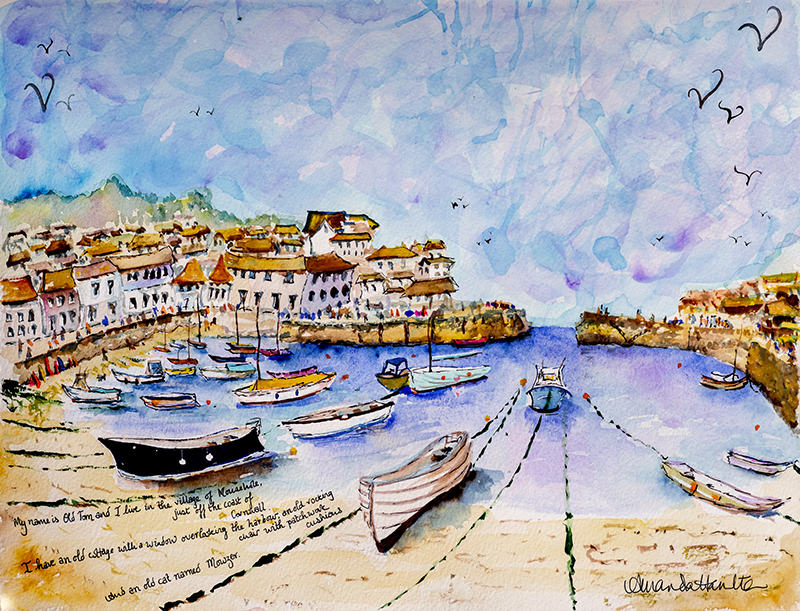 In comparison to my Monnow Bridge painting where I only used 7 colours, I’ve decided to use the pre-mixed tones in this piece. Now it’s time to deepen things and I like the ease with which I can augment colours both in the water and out. I usually don’t rework water generally as I don’t like what I call tide marks, but the hybrids don’t seem to mind too much!

Would I recommend these hybrids? Yes, I would – it’s certainly less hassle squeezing paint out of a tube than wetting half pans and trying to achieve the same intensity of colour. I think you need a BIG palette with lots of little mixing wells so that the very runny hybrids don’t auto mix with other paints but the plastic tubes are fantastic because no matter how sediments and gritty the mouth of the tube, the lid still opens easily.

Journaling with the ShinHan Hybrids

When I go on holiday, I like to take a journal, the kind that is robust enough to take paint, crayons, thick black markers and even collages and felt tips. I like to use the journal to help me express what’s going on as, like many artists, I’m fairly emotionally active! 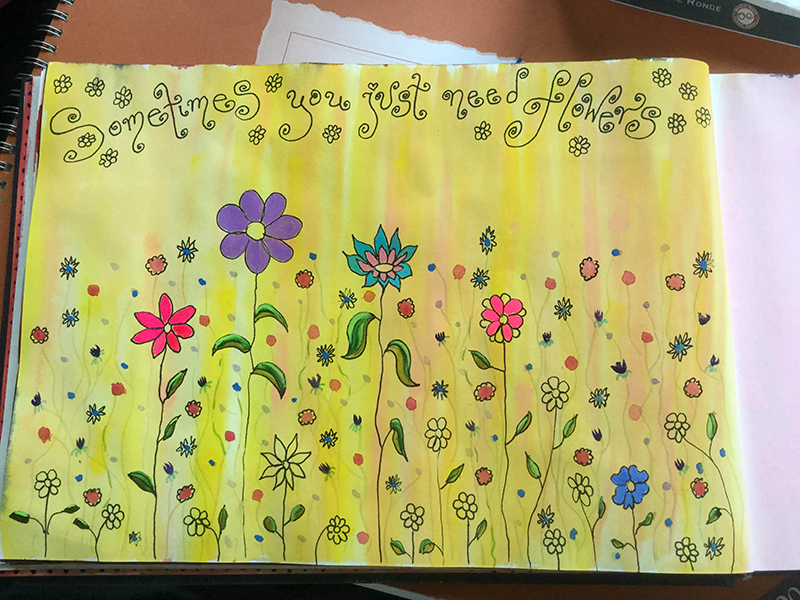 For this background wash, I used Shell Pink and Carmine on one page and Jaune Brilliant with Permanent Yellow on the other, experimenting with direct application straight onto the paper and blending on the page. While the Jaune Brilliant and Permanent Yellow blended well in spite of the very absorbent paper, the Shell Pink and Carmine was a little more blotchy as you can see. 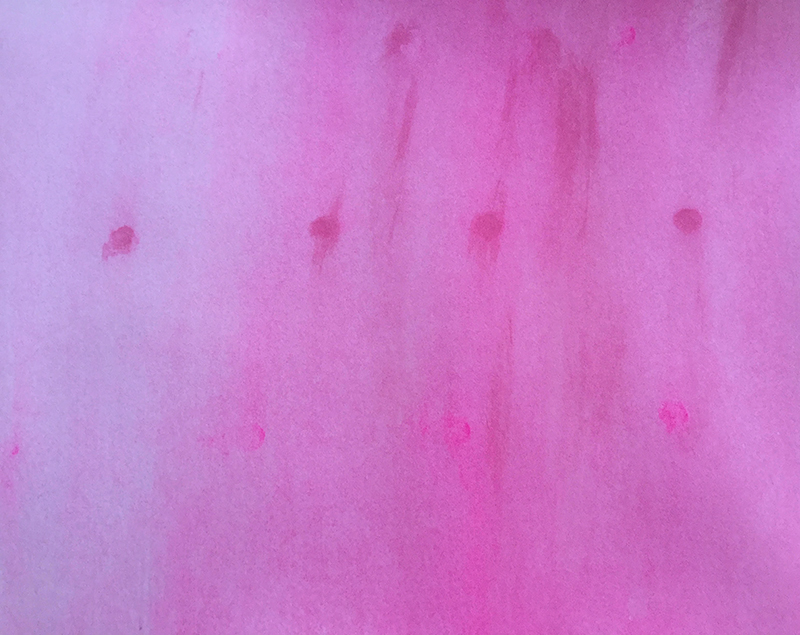 I’ve developed many journals using gouache and half pans, always trying to create vibrancy and while the more translucent paints can manage it, there is usually a dull granular effect. I’m really delighted though as it’s not at all dull with the hybrids!

I started by drawing the outline of my flowers straight onto the naturally dried background to see if the hybrids would cause the black marker to run. They didn’t – it was an epiphany moment as it meant not needing to be so meticulous with in-filling. I chose bold colours and multi pigments. Not a muddy effect in sight! 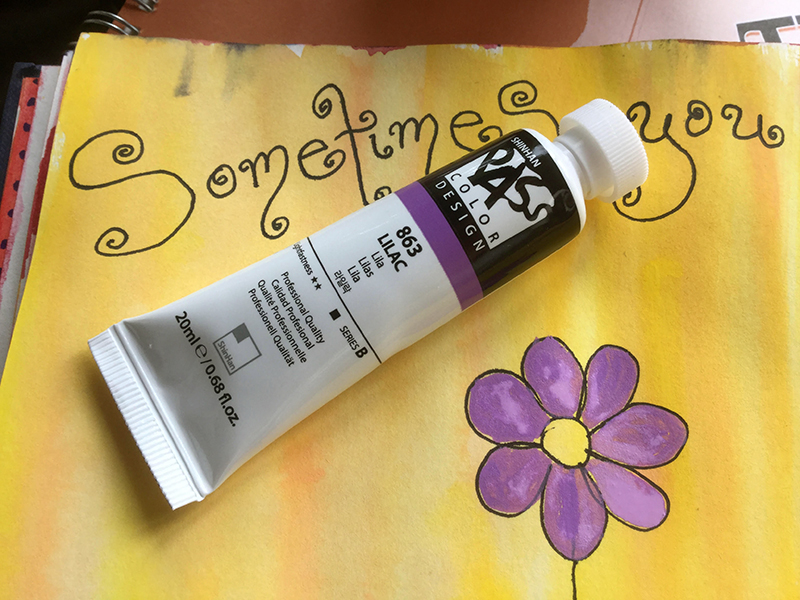 The Lilac hybrid paint had less natural moisture so after the first petal, I began to dip my brush in a little water to spread it further as it was too dry to move around. You can see where the paint is a little thinner. 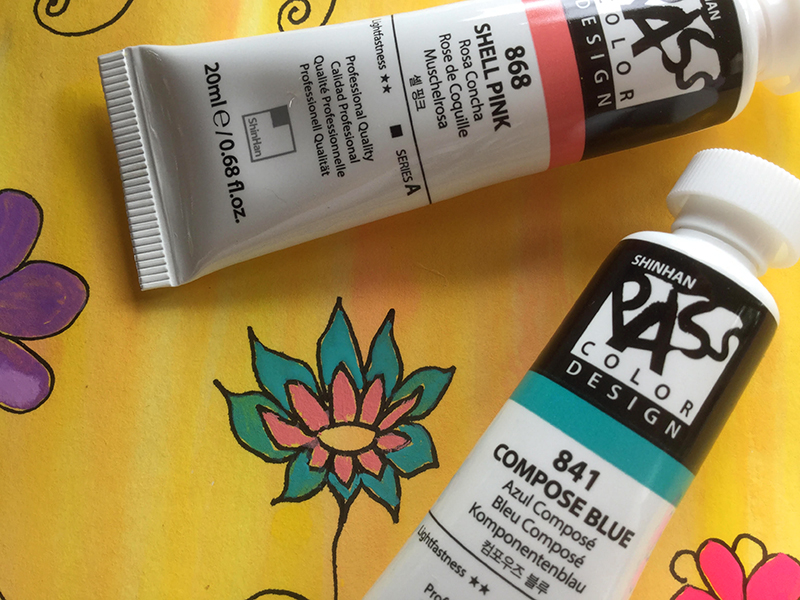 The same happened with the Shell Pink so a touch of water again and the flow was delightful. No blobs, no grit, no granularness. Smooth and easy to apply. I began to add a little water after the first new pigment and like the soft contrasts in tone. I was in each instance painting direct from the tube onto the paper. 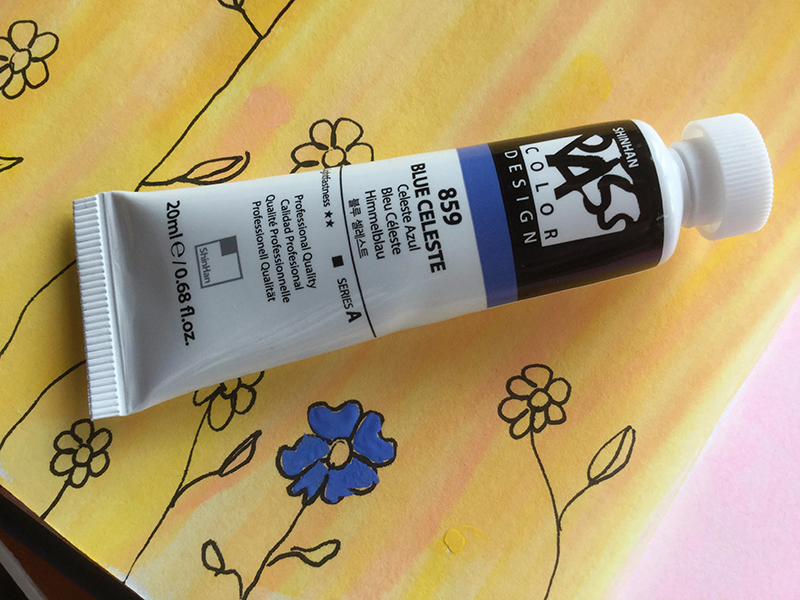 Rather than mixing my own greens for the leaves, I decided to experiment with the big range greens in the box. By the end of my painting I did also use some mixtures – working with a little Red Violet, Carmine and Cobalt Blue. 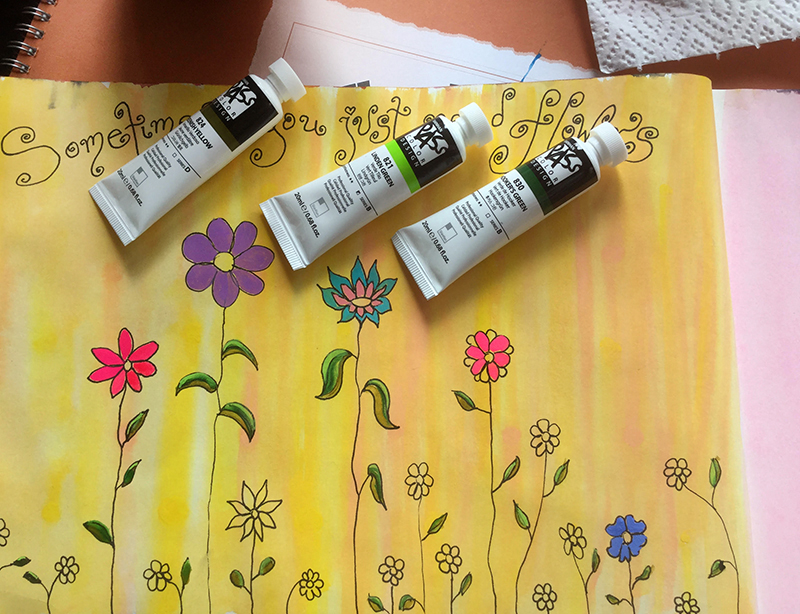 Amanda Hamilton’s work is currently on view at Woodys Arts Cafe (upstairs at Woods of Whitchurch) as part of the Forest & Valleys Open Studios this month until 24 July 2016.

Amanda Hamilton is also a tutor for Authentic Adventures, leading painting holiday to Málaga and Umbria in 2017. For more details or to make a booking, please email sarah@authenticadventures.co.uk. 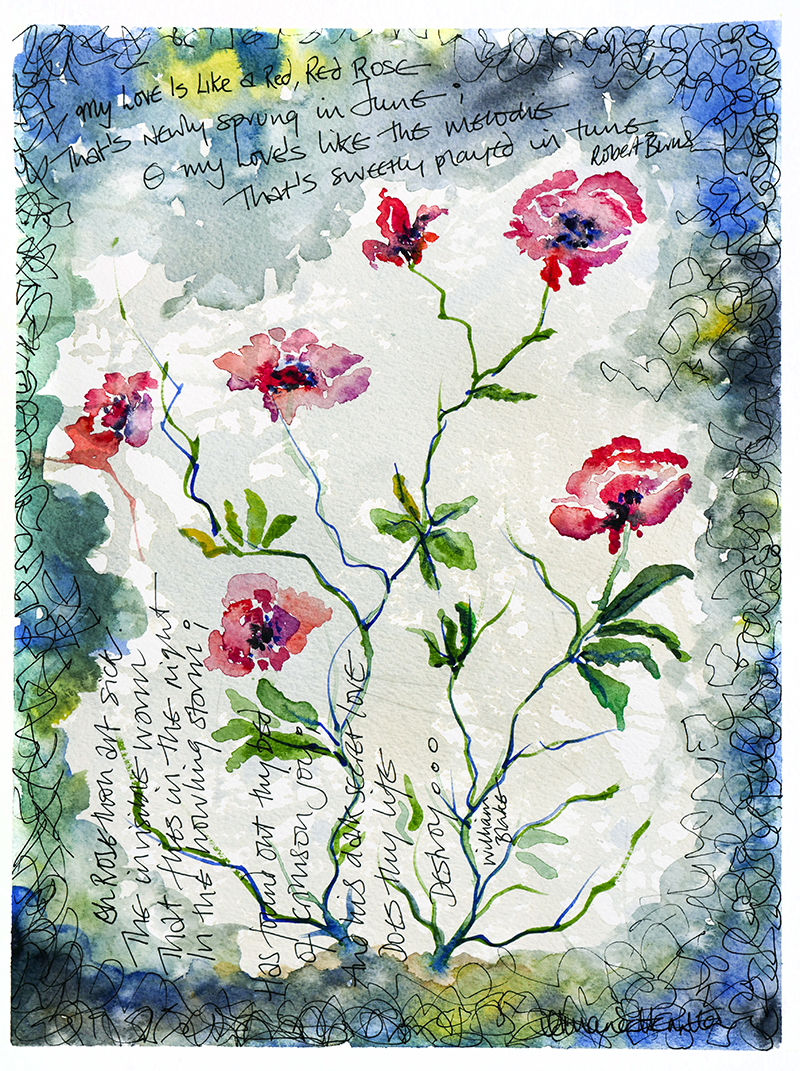