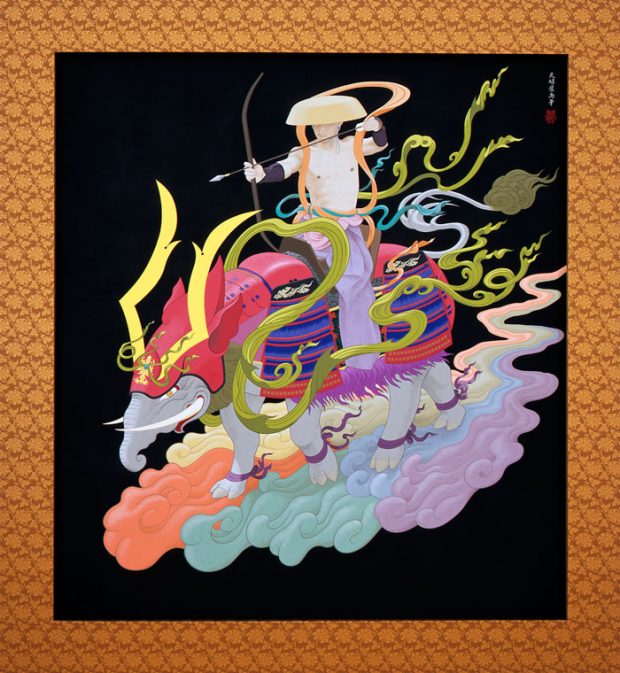 Hisashi Tenmyouya is a Japanese contemporary artist that has collaborated with Turner in creating a selected set of Japanesque Acrylic Gouache Colours. We wanted to find out a bit more about the artist and the inspiration behind his artworks, including the painting which is featured on the box of the Japanesque Set.

Born in Tokyo in 1966, Hisashi Temyouya coined the art concept ‘Neo Nihonga’ in which he revives elements of traditional Japanese traditional paintings as a contemporary art.

Nihonga or literally “Japanese-style paintings” are paintings that have been made in accordance with traditional Japanese artistic conventions, techniques and materials. While based on traditions over a thousand years old, the term was coined in the Meiji period of the Imperial Japan, to distinguish such works from Western-style paintings, or Yōga. Read more about Nihonga paintings in our earlier blog post here

From his website, Hisashi tells us that Neo Nihonga is an art concept formulated in 2001 opposing modern Japanese-style painting, an art form that has lost substance sticking to traditional materials like mineral pigments, glue and ink. Neo Nihonga is a new genre using new materials such as acrylic paint, while still referring to the characteristic features of Japanese art, such as traditional Japanese line drawing with decorative, symbolic and playful elements. The subject matter often will portray contemporary Japan with references to the classical essence of Japanese art.

Neo Nihonga was proposed as a means for interrupting the post-Meiji concept of nihonga, and breaking free from the hierarchical structure that has been dominating the Japanese art world since the modern age, and at the same time, as a possible alternative ground in the discussion of Japanese contemporary art history.

Moreover, Neo Nihonga respects and modernises the varied expressive styles of Japanese painting prior to the establishment of the modern nihonga concept.

This series depicts the three mythical beasts (according to the “Taiheiki” they were originally eight dragons) ridden by “The Sixth Demon,” the greatest of the heterodox gods. Oda Nobunaga, who strove to destroy the established Buddhist faith, supposedly worshipped these gods of destruction. Acrylic on Wood, 150×119cm, 2004

An example of how Hisashi Tenmyouya has entwined classic Japanese painting within modern society, this is a public poster which was created for the 2006 FIFA World Cup, nine artists from five continents produced the posters. As he was the one artist from Japan he chose to depict two samurai (which is deemed to be a common overseas stereotype of Japan) playing soccer in full battle armour.

Collaborating with Turner Colour Works, this set has been specifically chosen by the artist as it features colours which he loves and works with in the majority of his paintings. Formulated with fine powders, Japanesque Colours have a unique texture. They can be used as a dye, blended, scratched into and painted over while remaining opaque. The Japanesque colours offer a traditional Japanese Colour Palette and give an incredible intensity and surface quality of a gouache with the drying properties of an acrylic (i.e. not being rewettable)

The artwork which is featured on the front of the set is titled ‘Baku’ and after reading about the origins of the title of the name, it would appear that Baku is otherwise known as the ‘dream eater’ and is a mythological being or spirit in Chinese and Japanese folklore which is said to devour nightmares. The baku cannot be summoned without caution, however, as ancient legends say that if the baku is not satisfied after consuming the nightmare, he may also devour one’s hopes and dreams.

Click the underlined link to go to the Turner Japanesque Acrylic Gouache Paint Set on the Jackson’s Art website.

Want to find out more about Turner’s Acrylic Gouache? Have a look at previous blog posts here

The image at the top which is the featured artwork on the Turner Acryl Gouache Japanesque Set is titled ‘Baku’ by Hisashi Tenmyouya, 2010, 166x152cm, Black Gesso, Acrylic, Wood and Gold Brocade