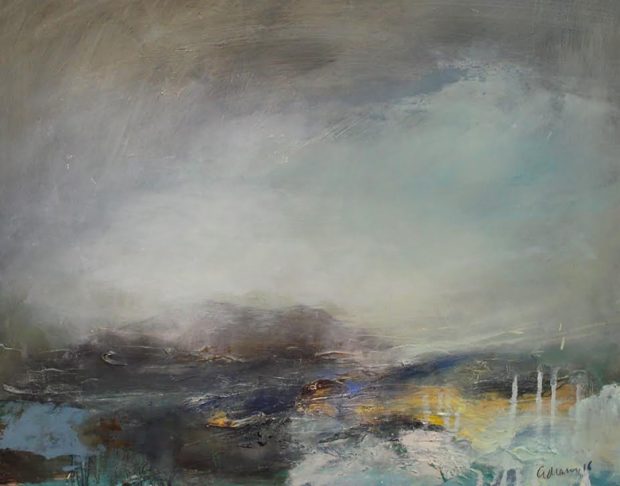 Georgie Mason is an artist with a dynamic approach to contemporary landscape painting. She uses a wide variety of unusual materials, from polyfilla to mud, to build her paintings up, layer by layer, to a surface which is varied in colour, texture and sheen. This year she has exhibited at the RA Summer Exhibition and has had two solo shows at the Boston Consulting Group. We spoke to Georgie ahead of her first solo London gallery show at H Forman & Son.

Duncan – Thanks for talking to us Georgie. How is the preparation for your first show going? Are you all sorted? Or are you making frantic calls to framers and calling in favours left, right and centre?

Georgie – I am getting there with the show but even though it’s mainly run by curators there’s still lots of organising my end: trying to get as much extra press as possible, inviting gallerists, bloggers and collectors that I personally would like to come along, printing flyers for local cafes etc. Painting-wise I still have a lot to do as well! It’s slightly scary but when you have a deadline you always make it, somehow. There are a lot of hours in the day if you use them well…

Duncan – The surfaces of your paintings are luminous, heavily-worked and thick with impasto marks. Could you tell us a little more about your working methods – do you have certain mediums or paint ranges which you turn to time and again? How do you apply the paint? (I think on your website you mention a windscreen wiper…)

Georgie – I tend to build up layers in every stage of the process. After priming the canvas, usually with gesso or white acrylic, I create texture using polyfilla, more acrylic and/or structure gel. I then start painting very bold marks in thick oil paint using a palette knife or a windscreen wiper.  The windscreen wiper I found in my Dad’s workshop whilst perusing potential art utensils and I couldn’t do without it. It can be used to drag paint seamlessly across the board in a way that a paintbrush can’t, or to create long, straight indents in the paint. It’s also great for getting out of a creative block – I just swish the paint around a bit with the wiper and some new marks appear which I can then work from. My paintings usually have four or five layers of oil paint, giving them lots of depth and texture. Once dry I often use glazes which I apply with a rag, and then varnish some of the textured parts, giving them a slight gloss finish.

Duncan – Do you get out and about en plein air, or is the process just too involved and layered for that?

Georgie – I tend to make sketches using watercolour, pens, pencils etc en plein air, which I then take back to the studio and work from. Living in London I have to take myself away to the countryside or abroad to get the inspiration I need. Although it is important to make sketches on these trips, they are just as much about simply immersing myself in nature and feeling refreshed when I return. I couldn’t do a whole painting outside because the layers take too long to dry, but there is a certain sense of movement that comes from painting en plein air and I try to capture this by working from my memory of a place rather than a photograph. 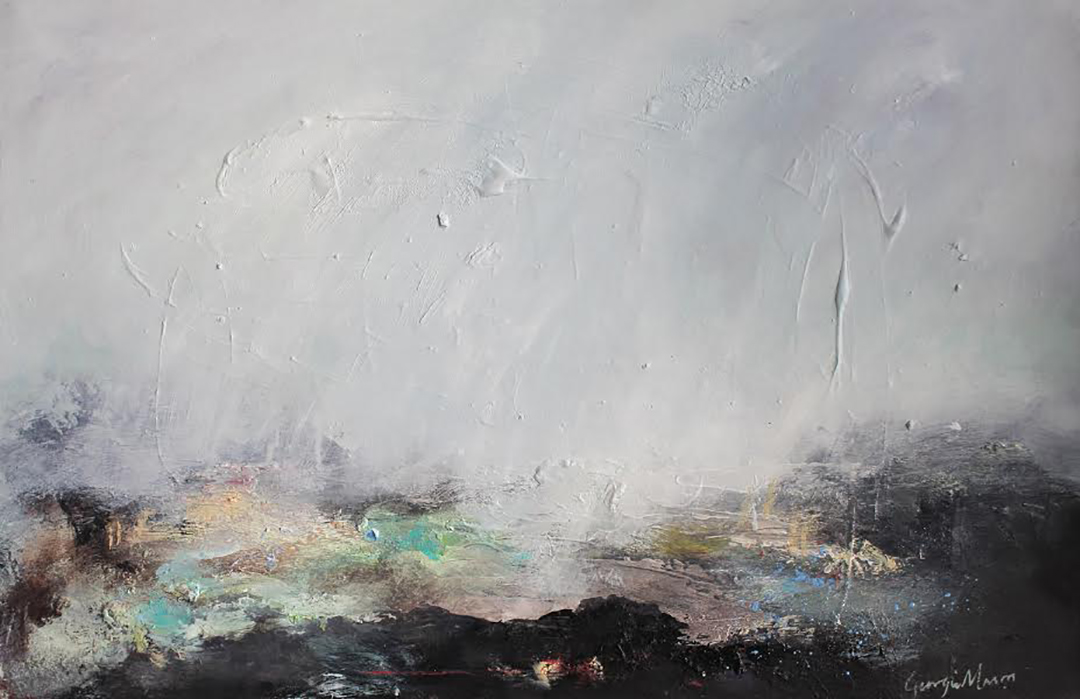 ‘Palimpsest’ (Oil on board) by Georgie Mason.

Duncan – To what extent does the degree that you took in English literature inform your work?

Georgie – I think my English Literature degree informs a lot of my work intrinsically. First, the fact I studied that and not art I suppose gives me a different outlook in that I am less influenced by conceptual-contemporary art world trends. I am concerned more with telling a story and translating my own feelings into my work which I hope gives it emotional integrity. Specific novels have informed my work, for example my upcoming solo show in H Forman and Son in Hackney Wick is called ‘The Sea, The Sea’, alluding to the novel by Iris Murdoch. In this book it is the sea with its ‘miscellaneous nature, its hugeness and unpredictability’, that serves as a symbol for life’s contingency and a reminder to her solipsistic characters that we cannot ever control or fully understand life.  I am quite interested by this idea and, although it is impossible to ever see the world through an entirely unselfish lens, I think through art we can get closer to understanding the vast differences in ways of seeing.  The conscious avoidance of becoming swept into a blinkered echo-chamber of world-views is particularly relevant in today’s world.

Duncan – You mention in your artist statement that you hired out gallery spaces in the summer holidays of your degree. Did you see this as a risk? If so, what was it that convinced you to take it?

Georgie – I suppose it was a risk but what better time to take one than when you’re still safely working your way to a degree? The space wasn’t very expensive (it was two rooms which I shared with an artist friend for around £350 altogether – although I think the rates have risen since!) so the worst that could have happened was that no-one bought anything and we lost a small sum of money. In reality we nearly sold out and even before we’d opened officially someone walked in off the street and bought a painting for £400, a great boost. The benefit of hiring your own space is that once you’ve covered your initial rental cost everything else (minus framing) is profit whereas (London) galleries take 50% of every sale. 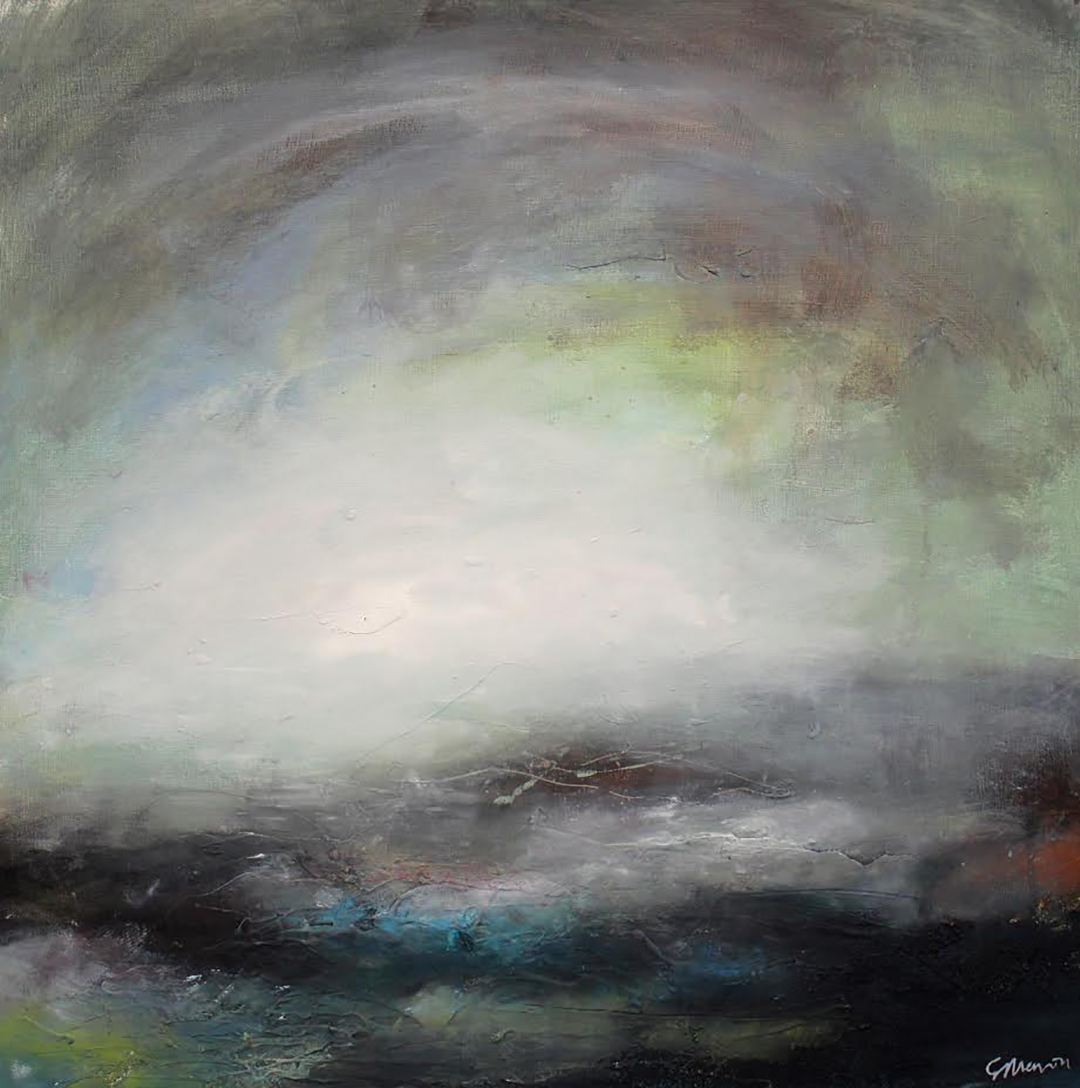 ‘Dusk Green’ (Mixed media on board) by Georgie Mason.

Duncan – How did you transition between university and self-employment as an artist? Did you find it easy or was it a bit of a slog?

Georgie – Because I was already exhibiting during the university holidays, hiring out spaces and doing all the PR and marketing myself, it was quite an easy transition. When I graduated I had been invited to exhibit in London and also as part of a duo show in Suffolk that summer. It wasn’t like I left university and had no idea what I wanted to do. I was still considering other options and some people thought I was crazy to go into art when I could have gone down a much safer route. But two years later I’m still painting and it’s gradually become something I can call a career!

Duncan – What do you do to get away from the logistical pressures?

Georgie – Actually, art can be a good break, almost a therapy, from logistical pressures, and the other way round. It’s great to have two sides to what you do that are so completely different from one another, and use different parts of the brain. I try to compartmentalise the two sides by working in cafes or at home on my laptop before moving to the studio to paint.

One of the most difficult aspects of the job, and I’m sure this is the same for everyone self-employed, is that it’s very difficult to switch off. There is always something else you can be doing. Even in the evenings if I’m watching a film I am usually updating my social media channels, or looking up which exhibitions and competitions to enter. Mainly this is because, not being on a salary, my income is dictated by how much work I put in. I often work late and over the weekends, especially in the run up to a show, but I’m working for myself and doing what I love so it’s worth it!

‘The Sea, The Sea’, an exhibition of new paintings by Georgie Mason, will run from the private view on the 12 January until the 9th February at the Smokehouse Gallery, H Forman & Son, Hackney Wick. For more information see Georgie’s website. The image at the top of this article is ‘Inchnadamph’ (Oil on board) by Georgie Mason.