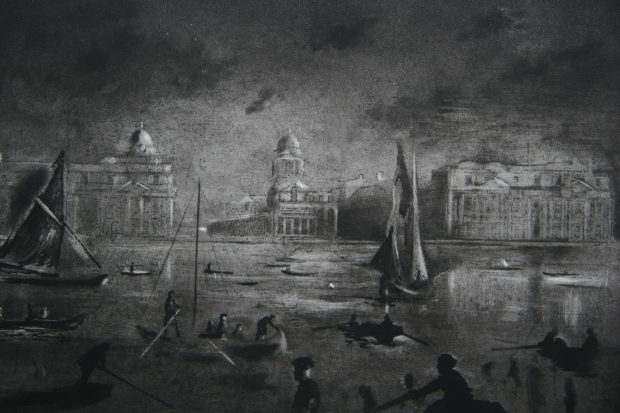 Nick Richards’ love affair with the Thames manifests itself in delicate etchings and mezzotints that search for the true spirit of the waterways. His works are largely monochrome, and often portray industry, trading ships, fishermen, and factories. There’s a quiet romance in Richards’ work which possesses a timelessness while still often featuring the modern architecture that you see lining the river today. Far from being a cold and impersonal record of the Thames, Richards finds points of inspiration in the landscape; using these as a starting point for constructing vistas that incorporate the architecture and life of by-gone eras. His prints are as much of this time as they are of all time. Nick Richards was recently elected an Associated Member of the Royal Society of Painter-Printmakers. 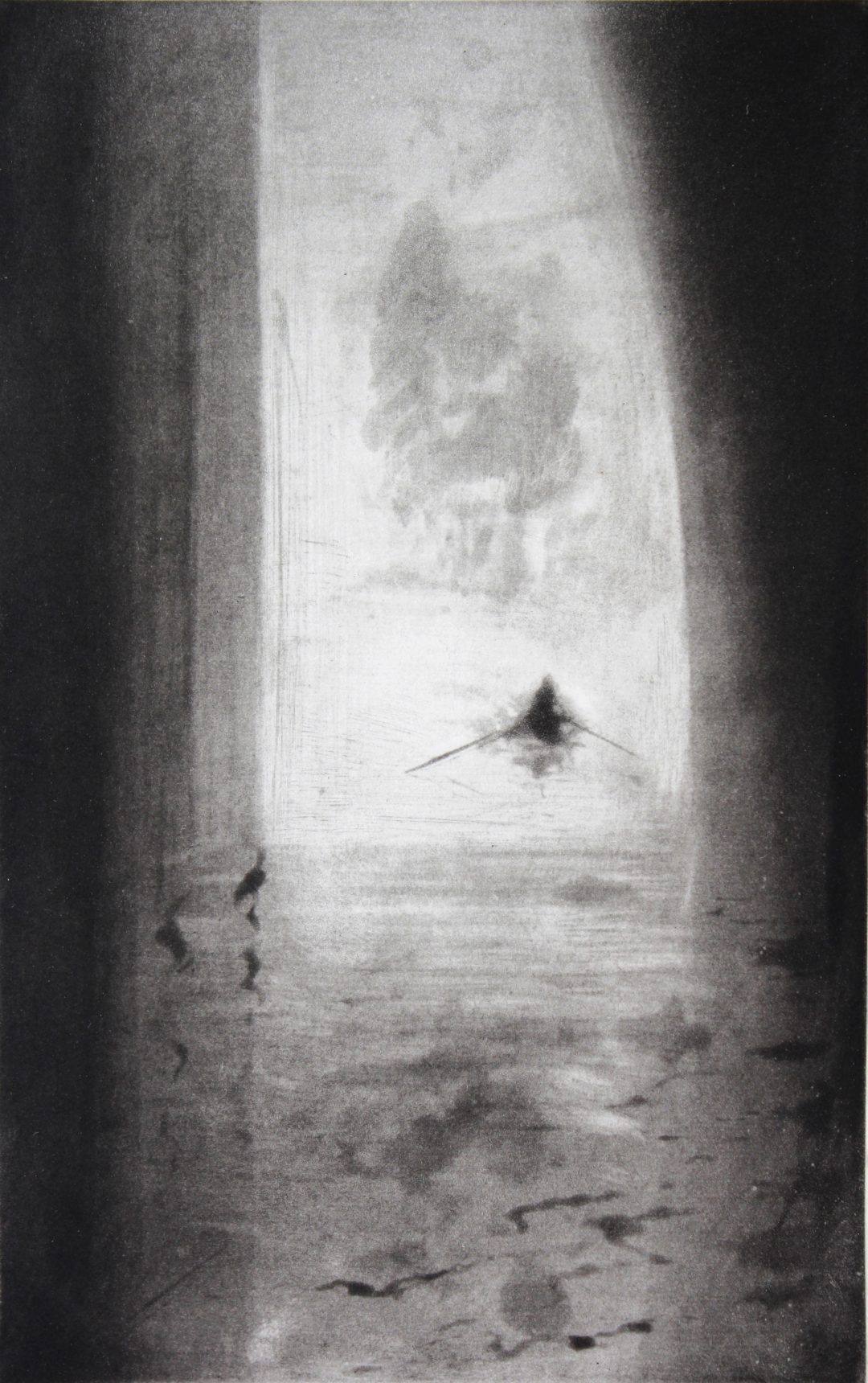 Lisa: Please can you explain in layman’s terms what a mezzotint and what an etching is? And what it is that you love about each of the processes?

Nick: The main difference (and I’m generalising) between an etching and a mezzotint is that an etching is made with acid and a mezzotint isn’t. A mezzotint is a type of engraving and is made with a tool called a rocker. This has different sets of teeth that create thousands of tiny holes that hold ink. The image appears by carefully burnishing the metal plate (usually copper)to create many different tones. An etching is a broad term for a number of techniques and a number of metals being etched in some sort of mordant, like for instance nitric acid or ferric chloride. I like the soft, velvet blacks that a mezzotint produces; I like the spontaneity of etching with acid. 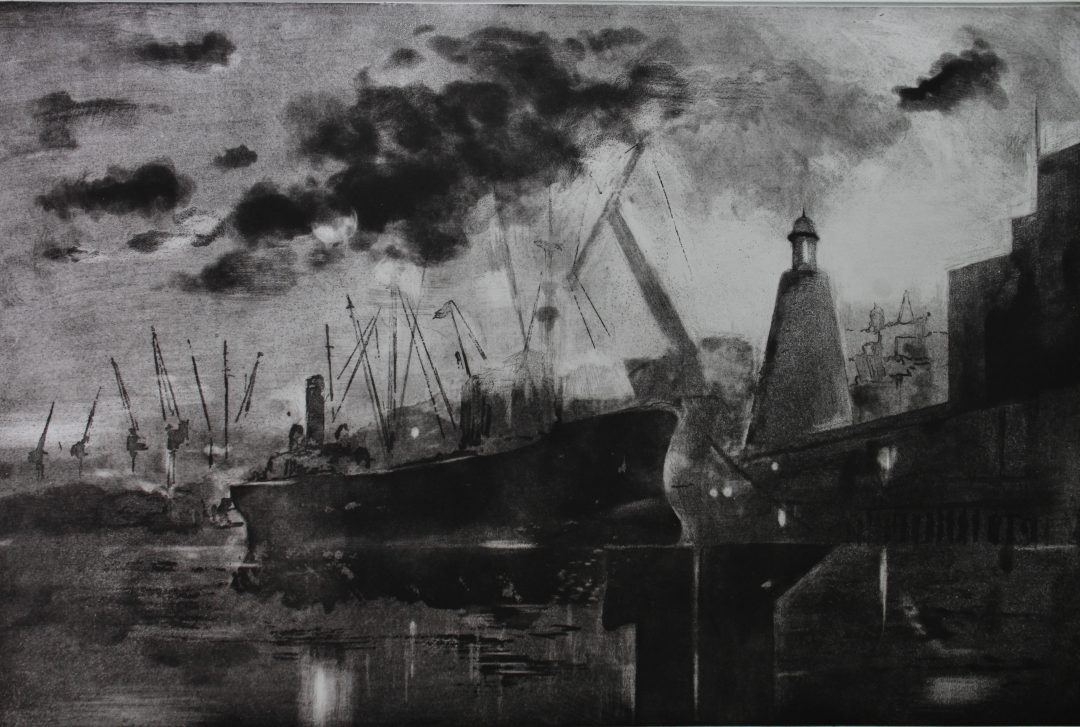 Lisa: How long have you had a studio by the river and were you inspired to make work about rivers before you got the studio?

Nick: I’ve had my studio for about seven years. The moment I saw the view of the river I knew I wanted to take a studio here. The front of my studio block has a panoramic view which I’m lucky to be able to sit and look at most days. I actually knew the area because I had drawn around here for a number of years and had crossed the river a lot on the Woolwich Ferry. I’ve travelled around London for many years drawing and exploring. 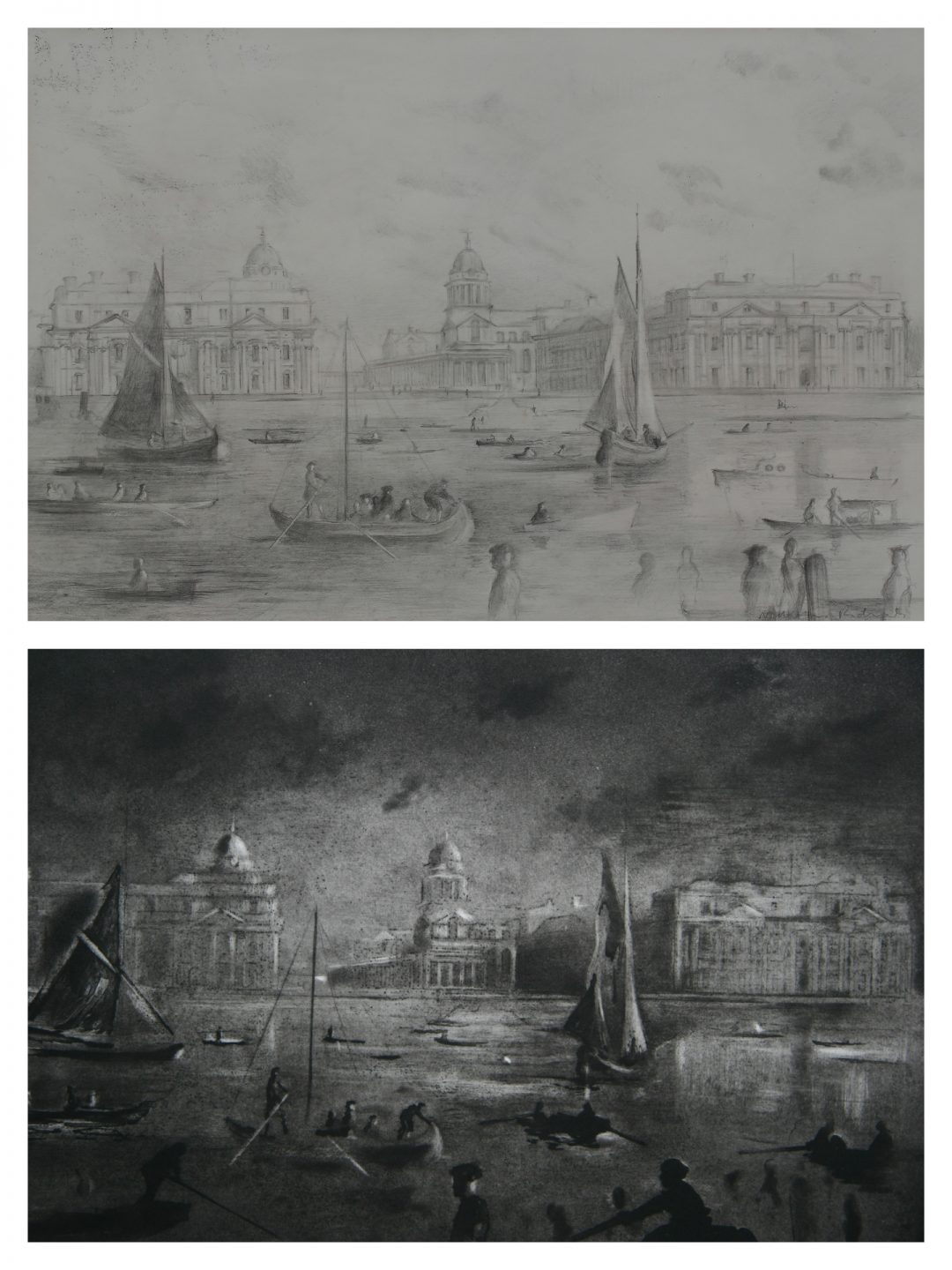 Lisa: Does the process of making your prints always start with observational drawing, or do you also work from photos?

Nick: I have drawn throughout my life really and I continue to draw and paint outside and in my studio. I also love taking photos and use them for information. But somewhere in the formation of my work I stop looking at all observed work and photos and let my imagination take over. 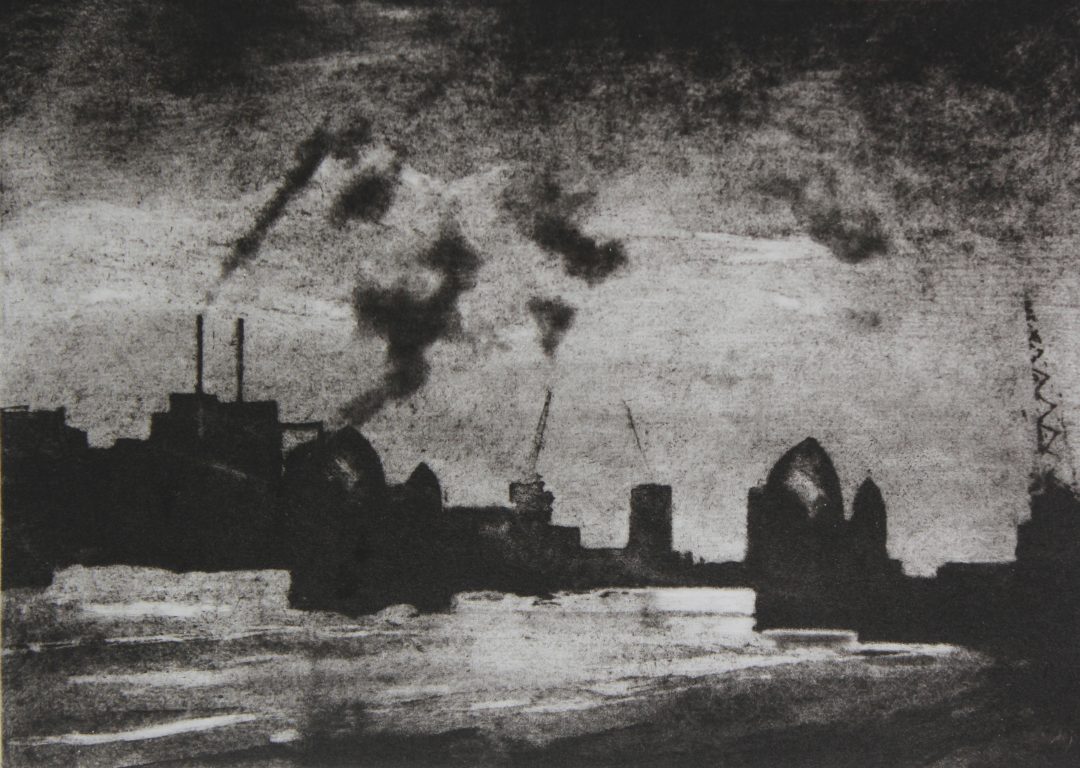 Lisa: There is a timelessness to your images – they could be mistaken for being a lot older than they are, and then with some of the prints you suddenly notice the modern architecture in the background…how important is it that these images are of what the river looks like today – do you see yourself as making a comment on the changing landscape of the Thames?

Nick: Although I explore along the river and record it, I don’t really set out to make any comment on the changing landscape of the river. I do enjoy trying to re-imagine it, bringing the past into the present or vice-versa. The old jetties and wharves do carry considerable power for the imagination as they’ve witnessed countless ships and generations of workers. I find a lot of the residential  architecture boring these days so I have to work hard to seek out what I find interesting or intriguing. 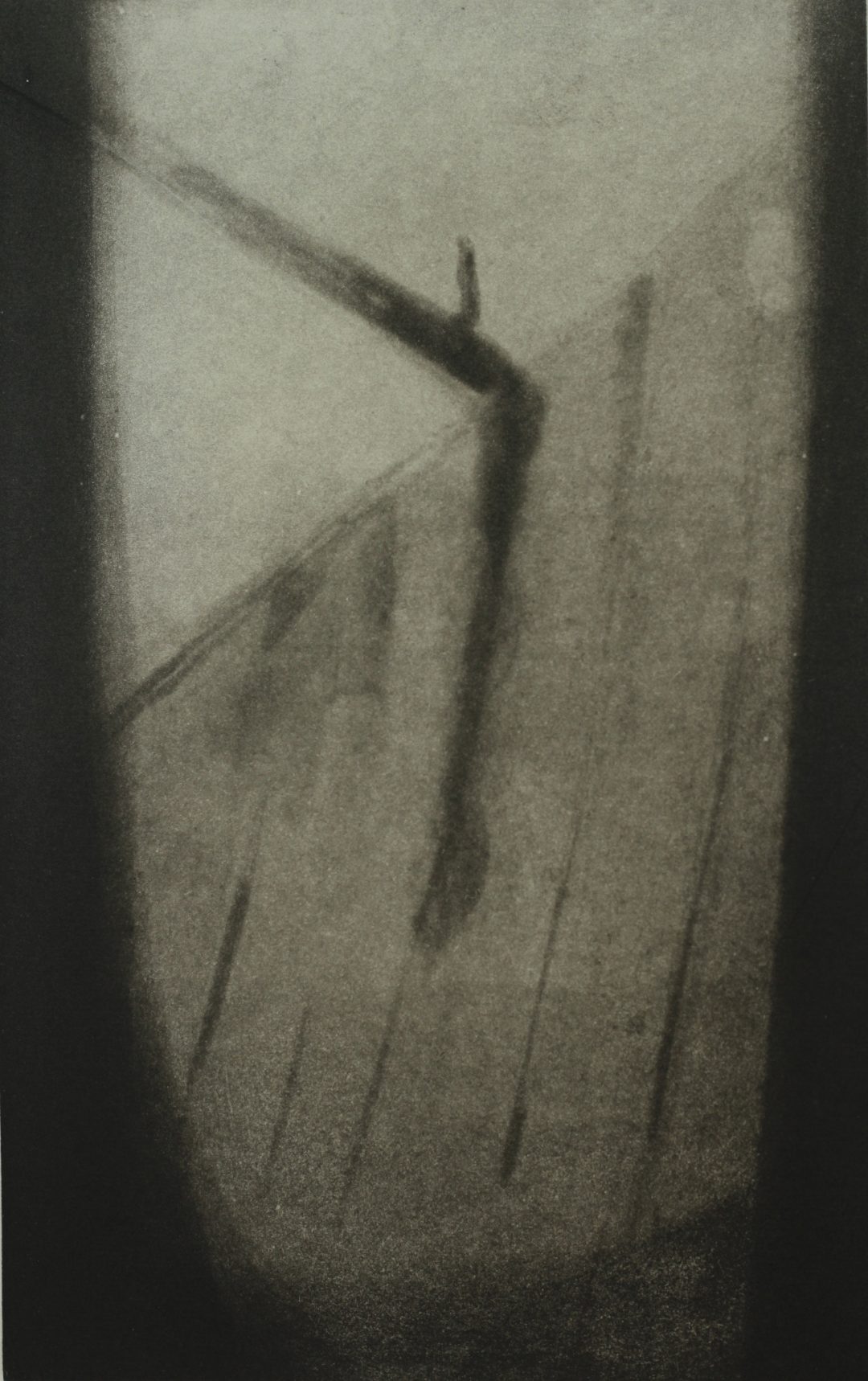 Lisa: You also teach printmaking. how much of your art form can be taught and how much of it has to be experienced first hand?

Nick: Most printmaking requires being taught first. I am very fortunate to have been well-taught by very good artist teachers. I understand the importance of continuing to teach a medium like etching. I’m experienced and disciplined enough these days to be very independent in my work. But my advice is enrol on a course and get some good tuition and support first! 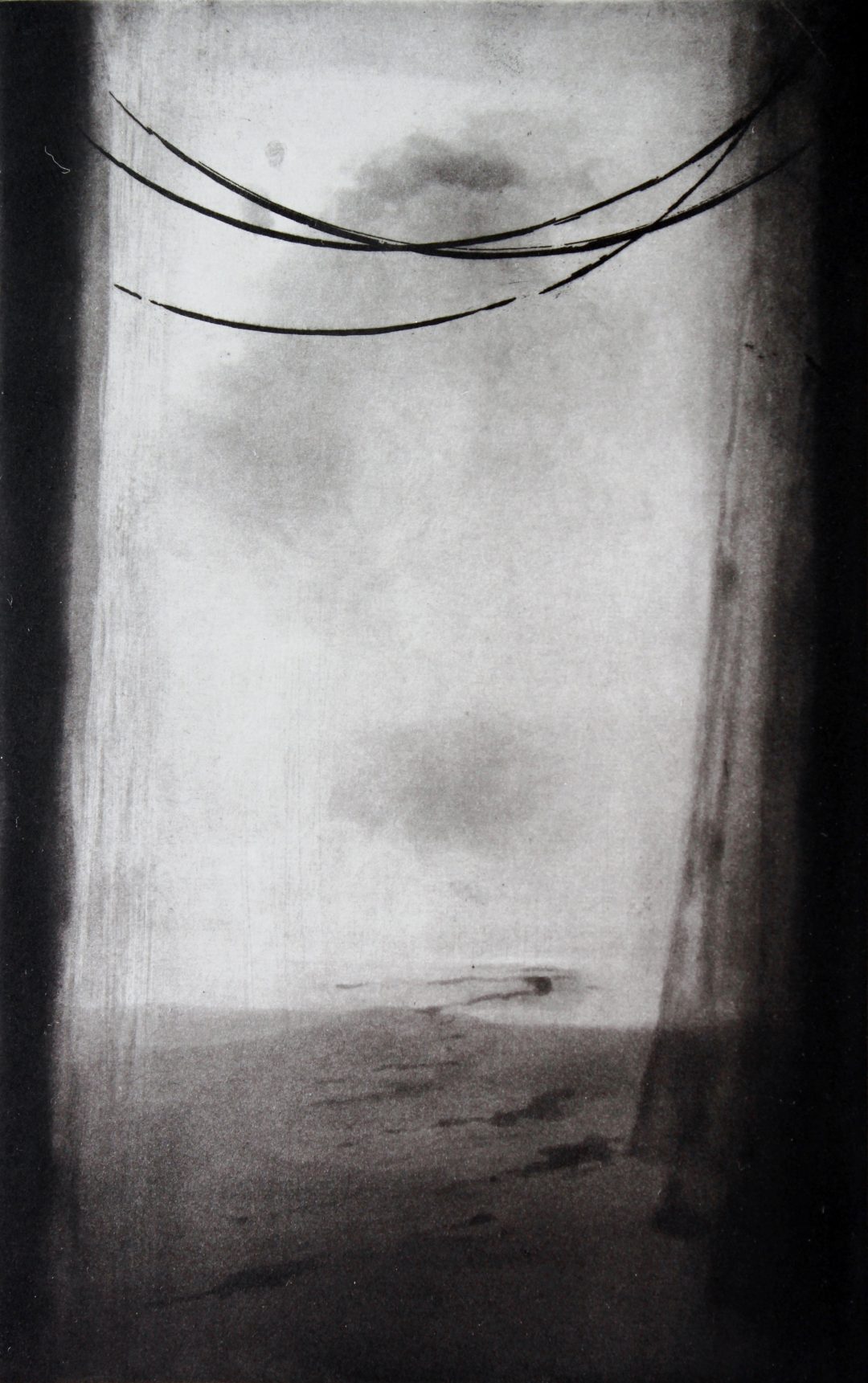 Lisa: How often do you draw? Do you keep a sketchbook and what are your favourite drawing materials?

Nick: I draw regularly in a sketchbook or on paper. I’ve always drawn with a pencil. I also enjoy using powdered graphite. It helps establish tone quickly in a drawing and can be used in tandem with pencil. 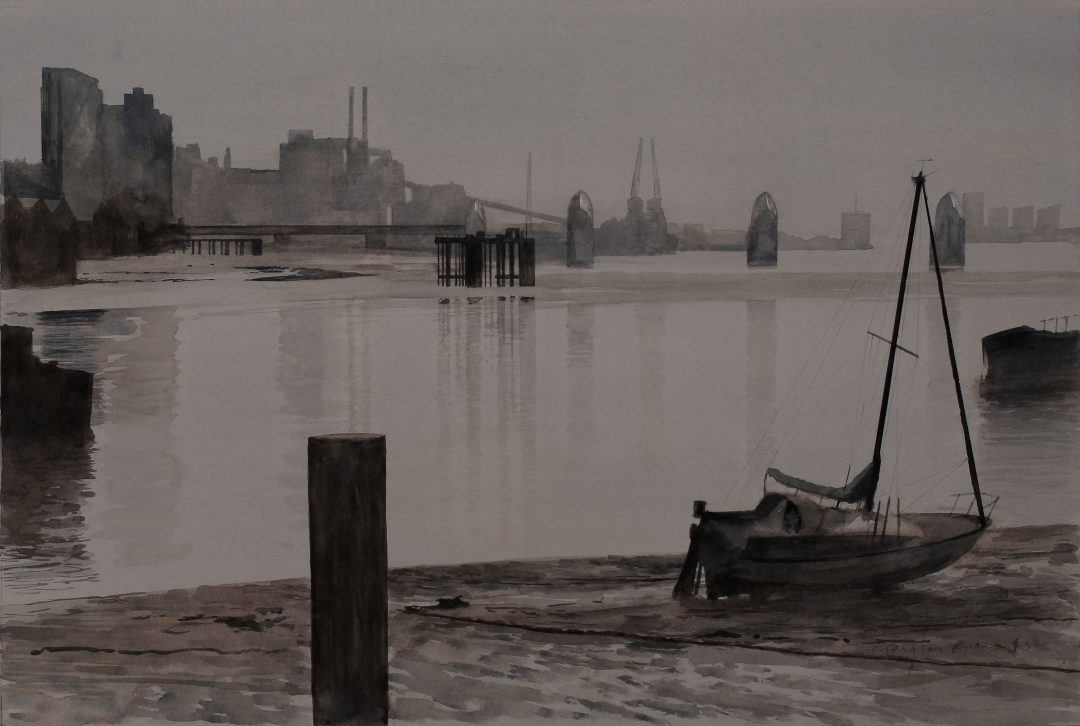 Lisa: Are you ever tempted to work more with colour?

Nick: Well, I like using some colour in my watercolours but my etchings have stayed black and white. Degas said if he could have had his way he would have worked just in black and white. That’s good enough for me! 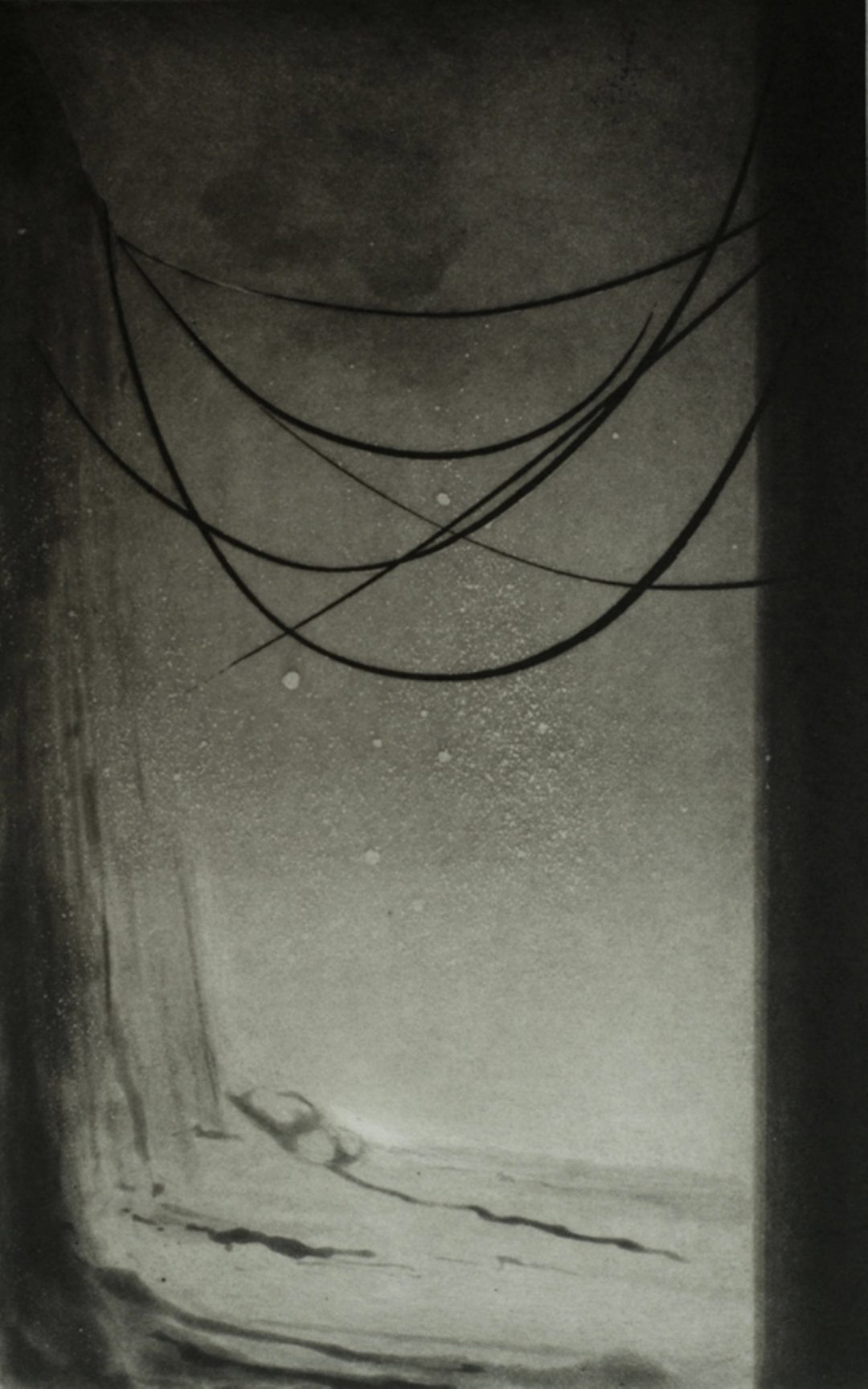 Lisa: What are the ingredients for a successful print?

Nick: A strong sense of design coupled with enough subtlety to draw you in and keep you looking and questioning. 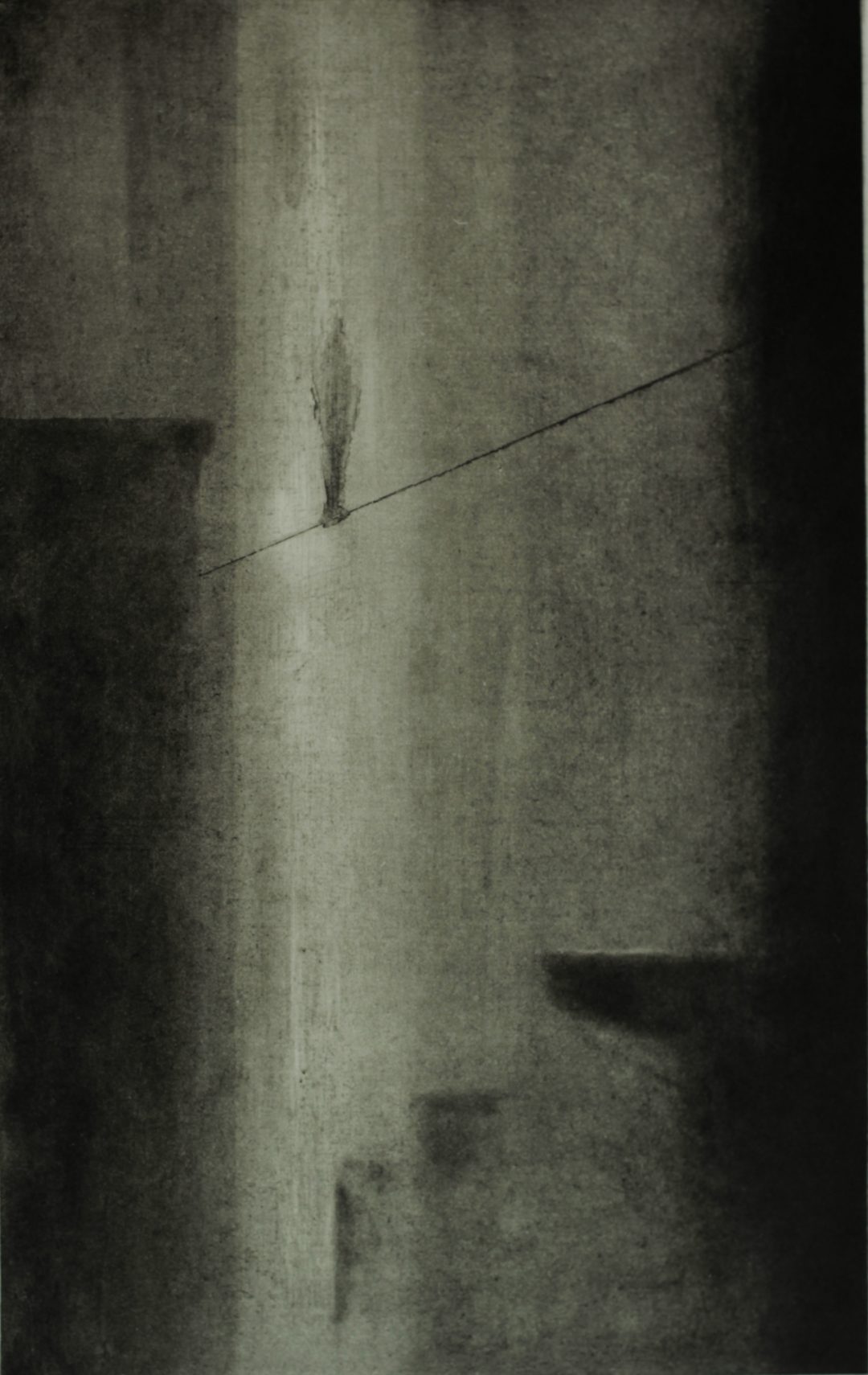 Lisa: What are you working on at the moment and what will you be working on next?

Nick: I’m continuing with my “Silent Highway” suite of etchings. I have a number of new images on the go and they will be occupying me for a while yet. I will be continuing to draw and explore outside. 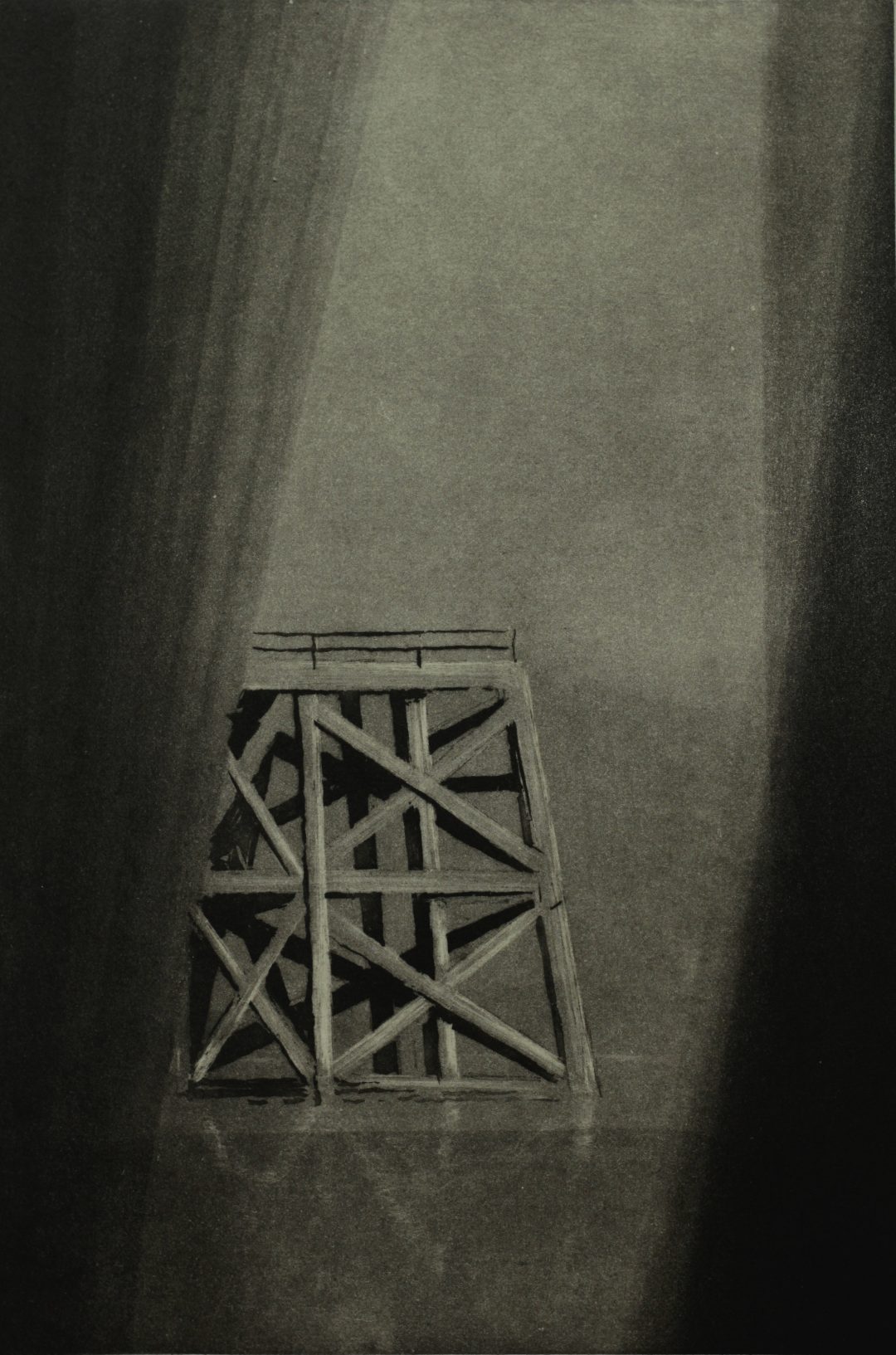 Nick: You can look me up at www.nick-richards.com or come to Open Studios at Thames-Side Studios (www.thames-sidestudios.co.uk ) on May 20th and 21st. Also RE Original Prints Exhibition at Bankside Gallery and also London Original Print Fair at the Royal Academy, both in May.