Jane Lydbury’s wood engravings have appeared in several books published by The Folio Society and in numerous books from private presses like the Jericho Press and the Reading Room Press. As a printmaker, she has also exhibited at the RA Summer Exhibition and in several of the Annual Exhibitions organised by the Society of Wood Engravers. We caught up with Jane to ask her about her working practice, her literary and artistic influences, and the materials she uses to create her prints.

Duncan Montgomery: Where did your interest in wood engraving start? Were there any artists or wood engravers who were big influences upon your early work?

Jane Lydbury: My interest in wood engraving began when I studied illustration at Camberwell Art School in the late seventies. I had a background in English literature and consequently John Lawrence, the book illustrator and engraver, was my tutor. So I had a go at wood engraving and took to it immediately. There were several things I loved about it; because the blocks were very expensive, the preparatory drawing had to be very clear, no fudging. Also because of the expense, they had to be small, but in compensation for that, the amount of detail you could get in was incredible. In terms of mark-making, the marks are either there or not there, unlike say aquatint which makes use of subtle tonal variations. So the images were very strong and I particularly liked the effect of making vignettes. Engraving was used for book illustration and its size was obviously an advantage for that, but it also stands alone very well.

Obviously John Lawrence was a strong influence on me, and I was also keen on Ravilious, Bawden, and particularly David Jones, who was a poet as well as an engraver. I also love Blake, for the same reason. I’m also influenced by Persian miniatures, because of the way the artists used the space; I love the combination of small, rich imagery with quite abstract qualities. 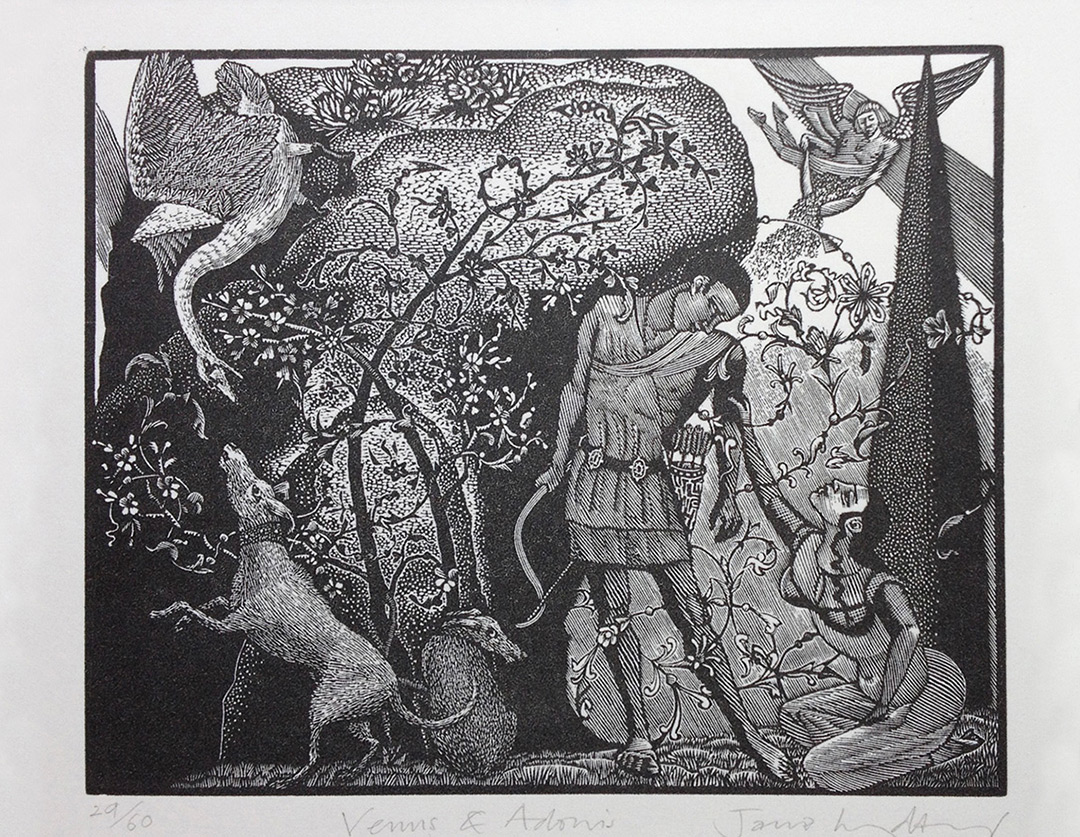 DM: You depict a lot of Classical subjects, and you’ve illustrated a few canonical Works of Literature (selections from John Donne’s sermons, a tale by Hans Christian Anderson). Is that a reflection of your tastes as a reader?

JL: My interest in literature was not academic, I felt that it was enriching and illuminated the path of my life. Words and images are so powerful in what they can convey.

DM: How do you go about preparing for an engraving? Do you produce a lot of sketches and studies before settling on a design?

JL: When I do an engraving I do a lot of drawings using layout paper, so if I draw a bit I like and want to keep I can trace it and add it to a modified drawing. Now we have computers I photograph and print my drawings in different sizes and can cut out figures and put them together as I want. Once I have a composition I often ask my daughters to model either a pose or a part of their body, which they do patiently. I also do life drawing for that reason. 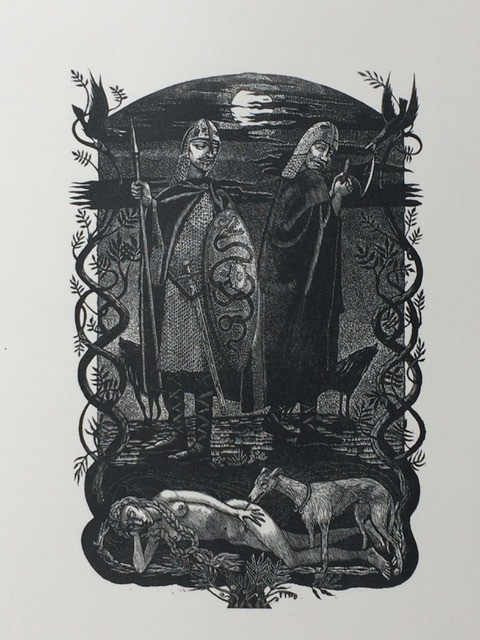 DM: Can I ask which tools and papers you use?

JL: I always use Zerkall paper, there is a particular one with a very hard glazed surface, developed by Edwina Ellis. Since I tried that I’ve never used anything else. I like to have a solid black on a good white, and clear details.

The tools I use are the ones I got when I was still a student. I bought them on a scary visit to Stanley Lawrence, who was presiding over TN Lawrence’s in Bleeding Heart Yard. I went to get some boxwood blocks and unfortunately gave the measurements in centimetres, and he sent me away. But when I plucked up the courage to return, with measurements in inches, he was very kind and always was after that. Some of the tools are German, my favourite is a spitsticker made by E. C. Lyons, which comes I think from New York.* I’ve also very kindly been given tools over the years and I have some old multiple liners and tint tools which I use.

[*Editor’s note: Jackson’s will be stocking a range of engraving tools from E.C. Lyons in the near future.]

DM: How long do you generally spend designing, and then cutting, an engraving?

JL: Designing and cutting an engraving takes me ages – the design is slow, since I’ve learnt to leave a thing and let it cook for a while if it’s not quite right. So it’s hard to put a time on it because the drawing might take a day or two but several days of rejigging. Sometimes I work up something elaborate and then look at my original, basic 30-second sketch and realise I’ve wandered far away from my feeling. The cutting is more straightforward – I once worked out I can cut about 10 sq cms a day, if it doesn’t involve an elaborate pattern or something like that. 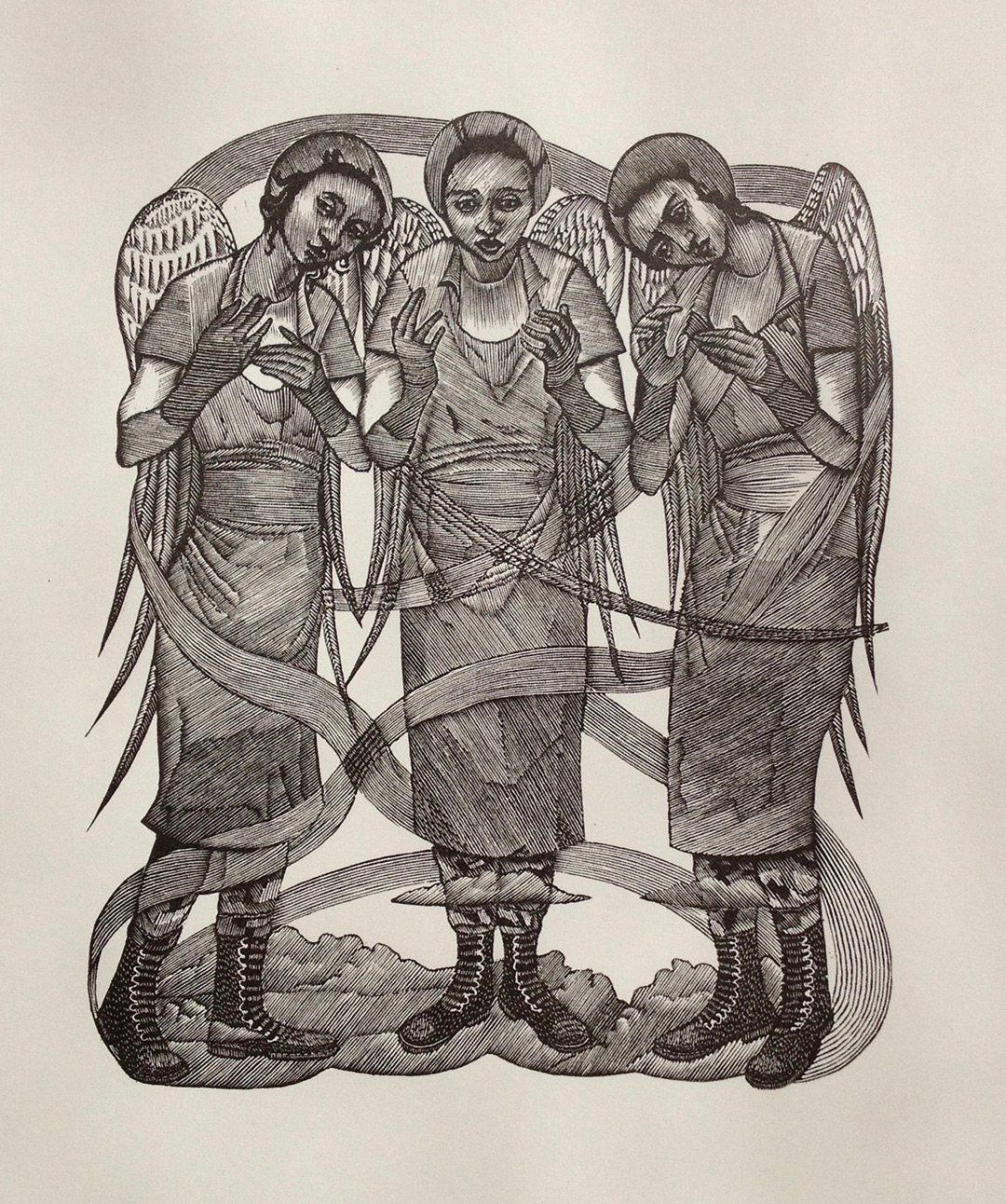 DM: Do you design or engrave differently when you know you’re working towards a stand-alone print, rather than an illustration?

JL: Some of the literary engravings I’ve done have been for the Folio Society Press. A series of engravings for Ovid’s Metamorphoses have been a personal project. The tale by Hans Christian Andersen was commissioned by the Society of Wood Engravers. A recent group of engravings for The Song of Solomon were commissioned by Miles Wigfield, of The Reading Room Press. The Press produced a limited edition volume of the libretto of an opera based on the Song of Solomon, written by the Irish writer Forrest Reid.

If you’re illustrating you have to work within the limitations of size and also respect the matter of the work. I like to have constraints within which to work, and the challenge of doing the best you can within those limits. When I do stand-alone work I also need some kind of constraint, like a particular size or shape, and I try to think in terms of a series on a theme or something like that. I like to let my imagination run free within those constraints. Maybe one day I’ll unleash it altogether.

DM: What prompted you to work on the Metamorphoses, as a personal project?

JL: The Metamorphoses attracted me because they’re somehow so odd.  I studied Latin at school and we read bits of them, and they intrigued me.  The theme of the title is change or transformation.  But Ovid took the old stories and played with them in his own unique way.

The image at the top of this article is a detail from Jane Lydbury, ‘Critical Care’ (Wood engraving, 14 x 11cm). Jackson’s will be stocking a range of engraving tools from E.C. Lyons in the near future.