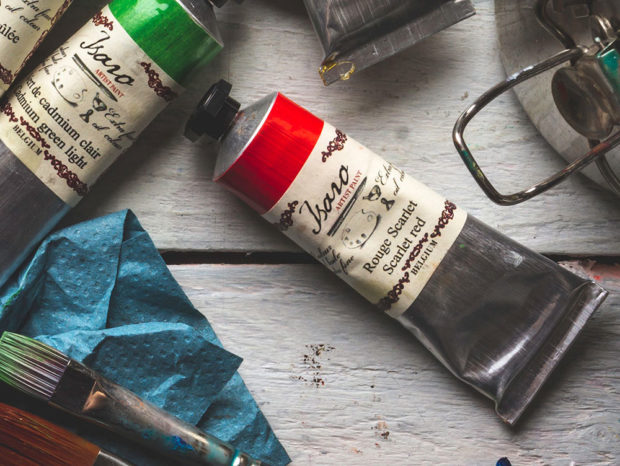 ‘Colourman’ is the traditional name for the job of making artists paints. Isaro Oil Colours are handmade by a woman who is descended from a long line of colourmen and painters. These gorgeous Belgian oil paints made by a colourwoman are now available in the UK, exclusively from Jackson’s. 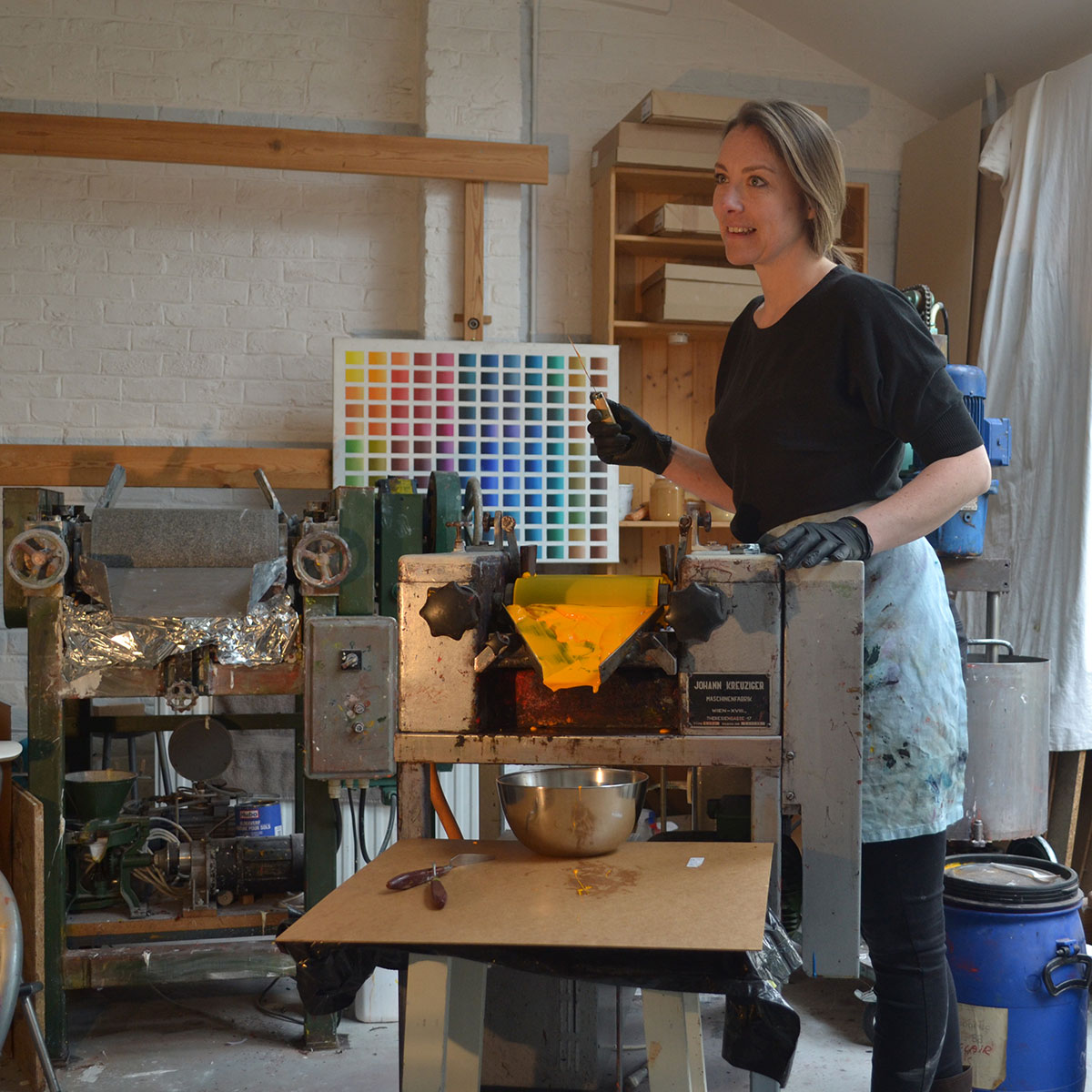 Isabelle Roelofs was born into a family of artists and colourmen, inheriting their passion and expertise for creating colour. In 2008 she decided to breathe new life into this heritage by creating a unique range of oil paints using traditional and modern pigments, selected using both her know-how and family tradition. She named the brand of paints ISARO (ISAbelle ROelofs). Isabelle says: “Artists come first and Isaro will grow and evolve with that principle in mind. I think that offering artists a quality product is the best way to be recognised.” The manufacture of Isaro colours is done on an artisanal, small-batch scale.

In oil painting the layers of paint harden (dry) due to a chemical reaction with the oxygen in the air. There are a few choices of unsaturated oil that can be used, that is to say an oil that is still capable of absorbing oxygen from the air so the paint can harden. Among the drying oils that are suitable for the manufacture of traditional oil colours, linseed oil has the highest polyunsaturated fatty acid content, so is the most siccative (drying). It also has the characteristic of forming a highly resistant protective film (linoxyn). Isabelle Roelofs thought that this most traditional drying oil for oil colours, linseed oil, was therefore an obvious choice for making Isaro. Linseed oil is sometimes criticised for yellowing; however it should always be borne in mind that this photosensitivity can be reversed by exposing the painting to sunlight. All the pigments used to manufacture Isaro colours are highly resistant to light. Isabelle Roelofs feels that there is such a great choice of pigments available these days that it would be unethical not to choose quality pigments for manufacturing Isaro colours. Isaro deals directly with pigment manufacturers requiring a technical data sheet indicating the characteristics of each pigment. She also bases her pigment choices on past experience and stability verification. Isabelle says “Out of respect for the artworks painted by painters, permanence is a key criterion. I only use pigments that have a score of 7 or 8 on the blue wood scale.” 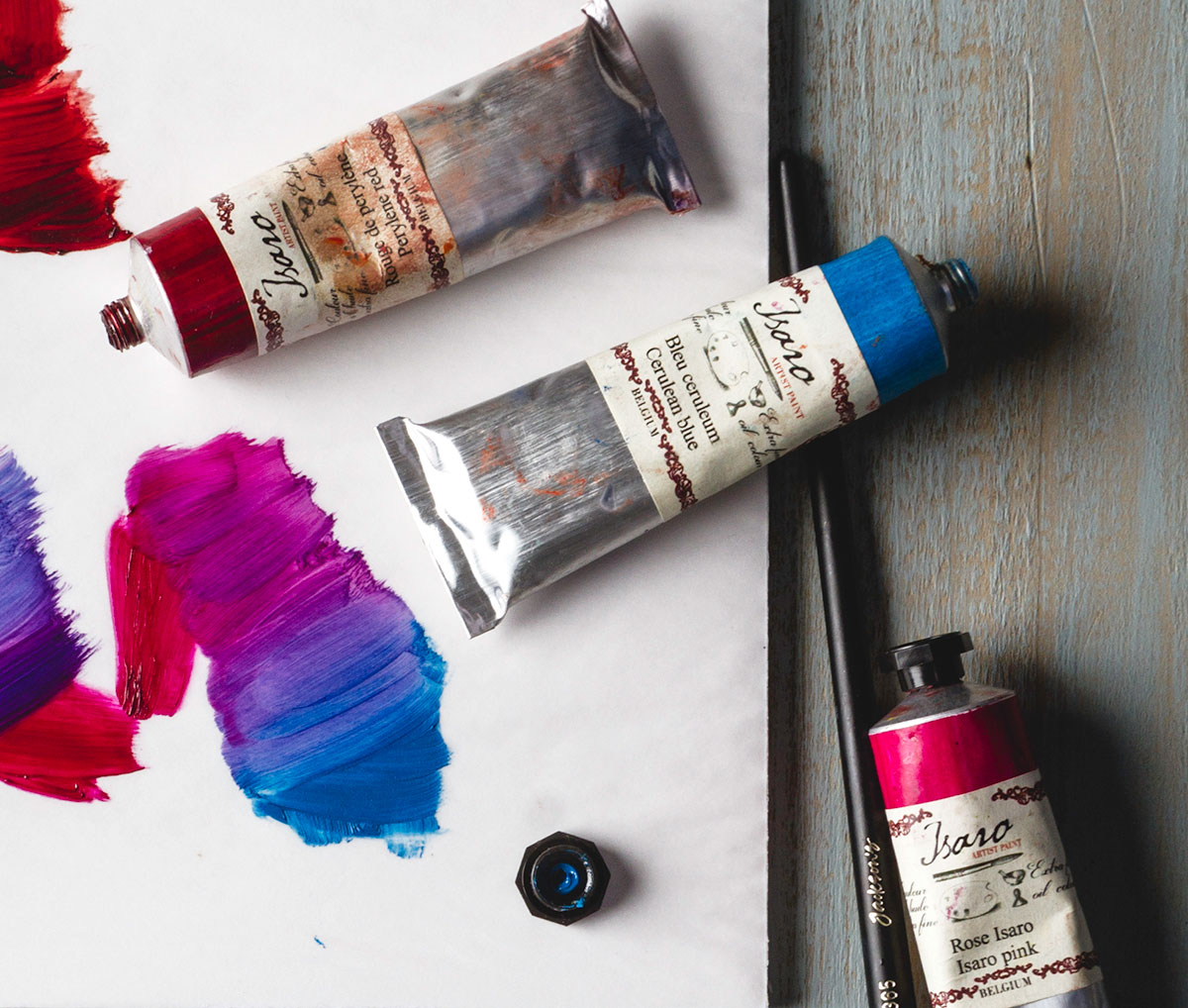 Painting with Isaro Oils: it’s the pigment that makes them special 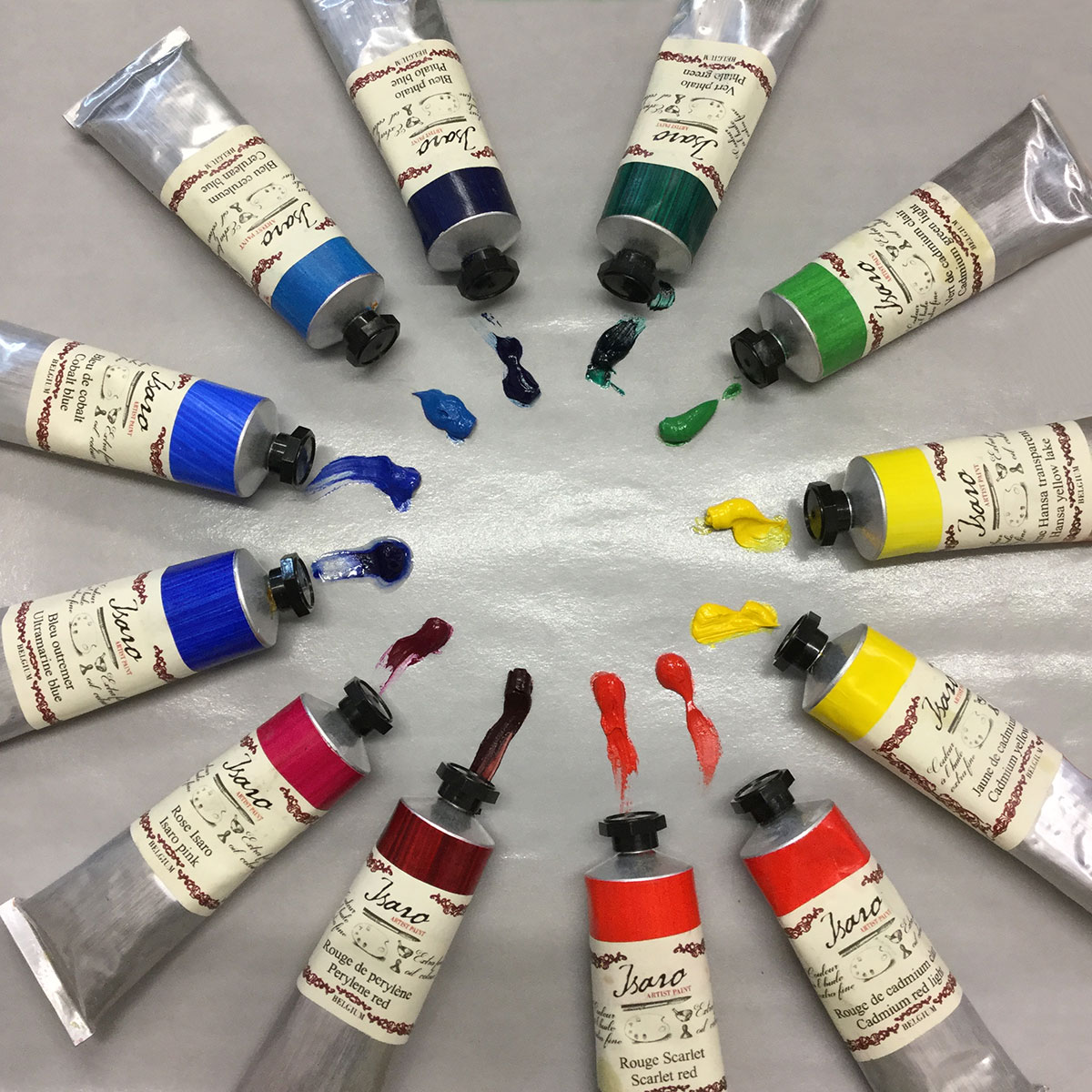 I painted two small paintings with the Isaro Oils, one with just some solvent and one with some painting medium. I found the texture really nice and a bit unusual. It reminds me of the few times I have made paint, hand-grinding it on a slab. The paint was not too stiff and nicely sticky straight from the tube and you could see a bit of the very fine pigment grain which gives it a nice body. The Cerulean Blue was especially grainy, you can see it shimmering on the palette below. Like all professional-quality oil paints each colour is a different texture, based on how much oil each pigment will absorb, some are softer than others.

For the moments during the painting where the paint was getting too sticky I used a touch of solvent (I used Jackson’s Shellsol T) and the paint broke down really easily and flowed smoothly, the pigment stayed strong.

Another painter who tried the Isaro also mentioned the pigment a few times, so I think that the pigment might be a key characteristic of this paint. He ended with saying: “It’s a well-crafted product with the perfect balance in the combination of pigment and oil, a lovely paint.”

After a week most parts of the red tablecloth painting were still wet to the touch. The jug was painted thickly with lots of white and was still completely wet. So like all professional-quality oil paints each colour will dry at a different rate with Crimson and Titanium White taking more than a week.

I enjoyed using the Isaro paints and made a lot of colour charts, shown farther below, to explore the mixing capabilities. 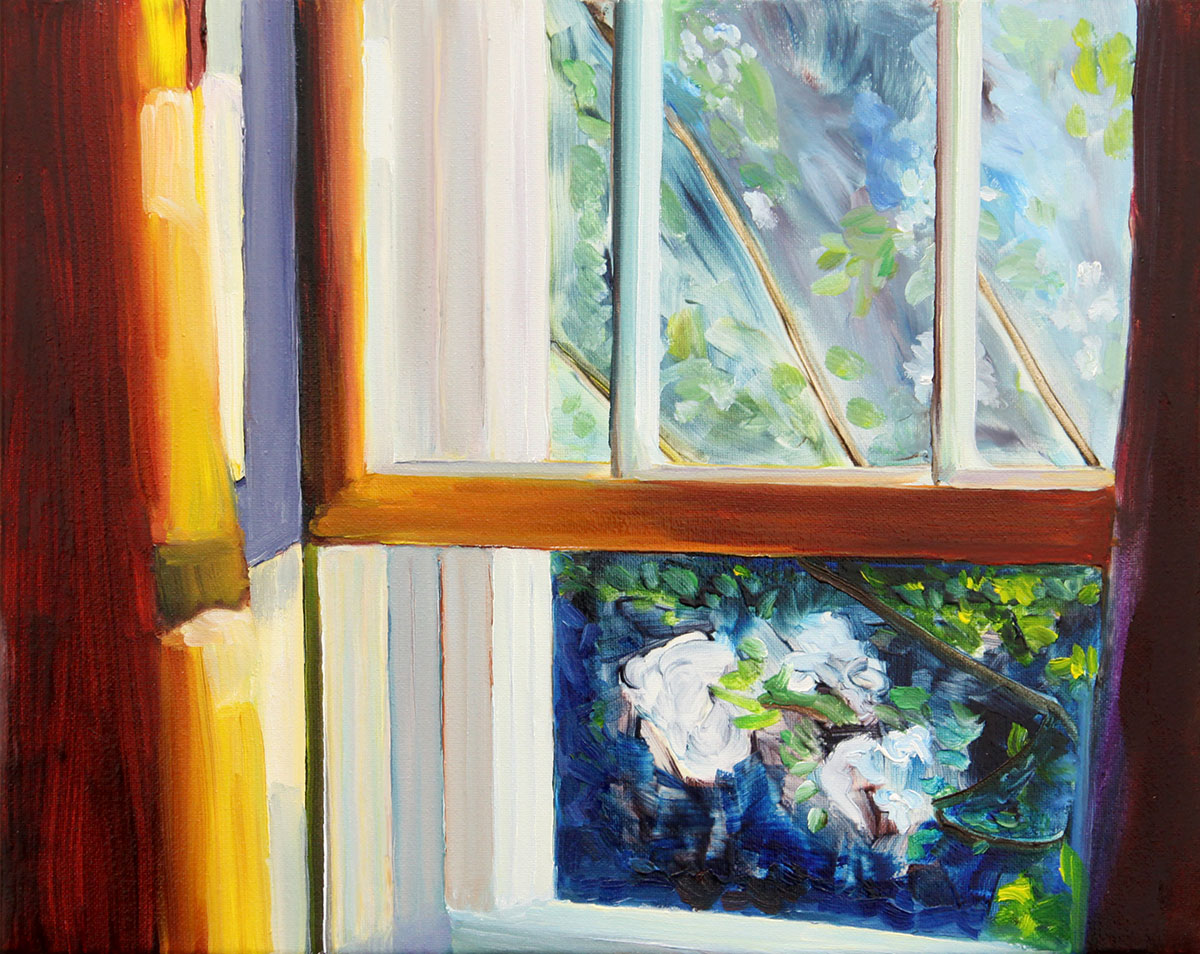 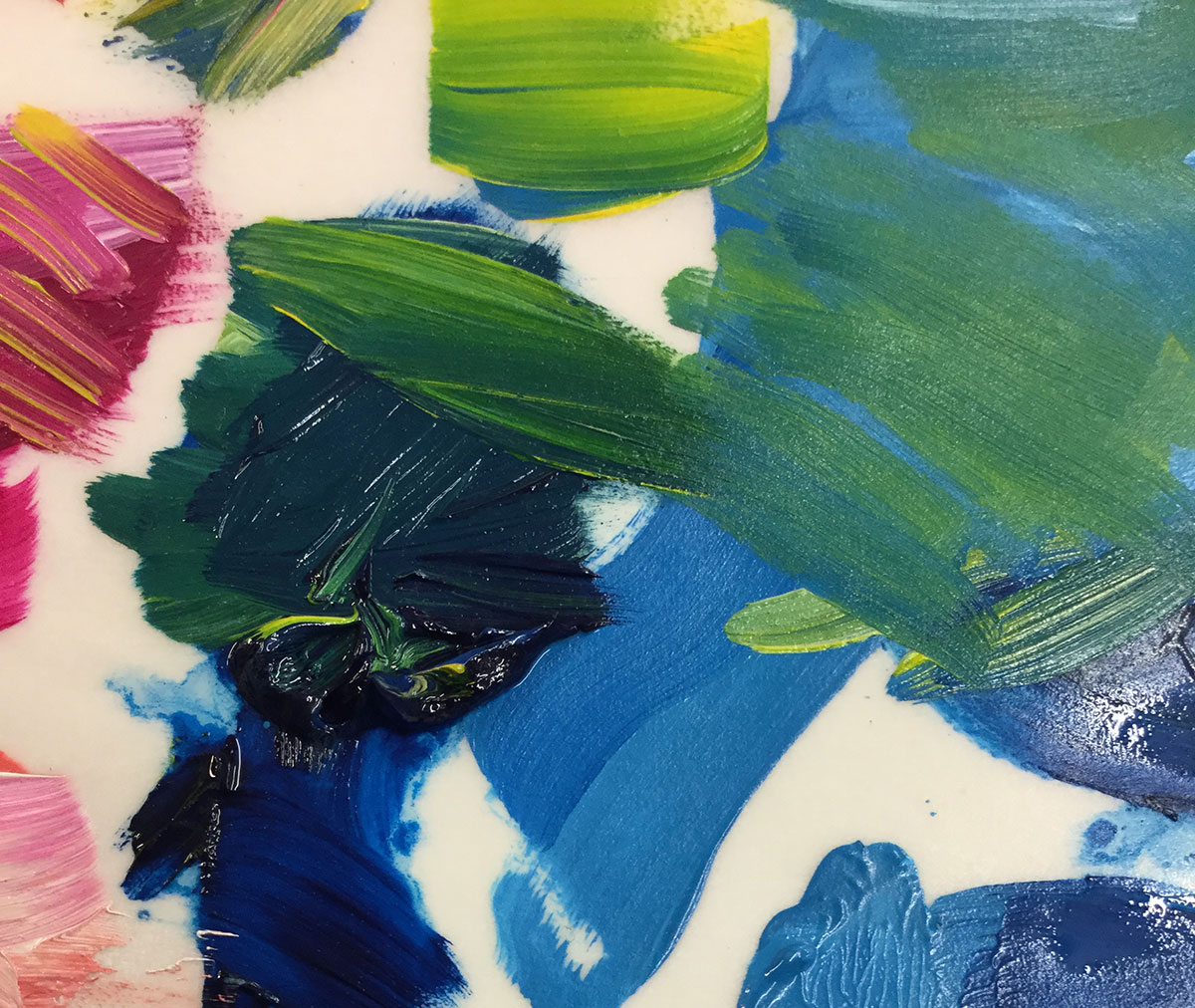 The Cerulean Blue has great body from the fine pigment. 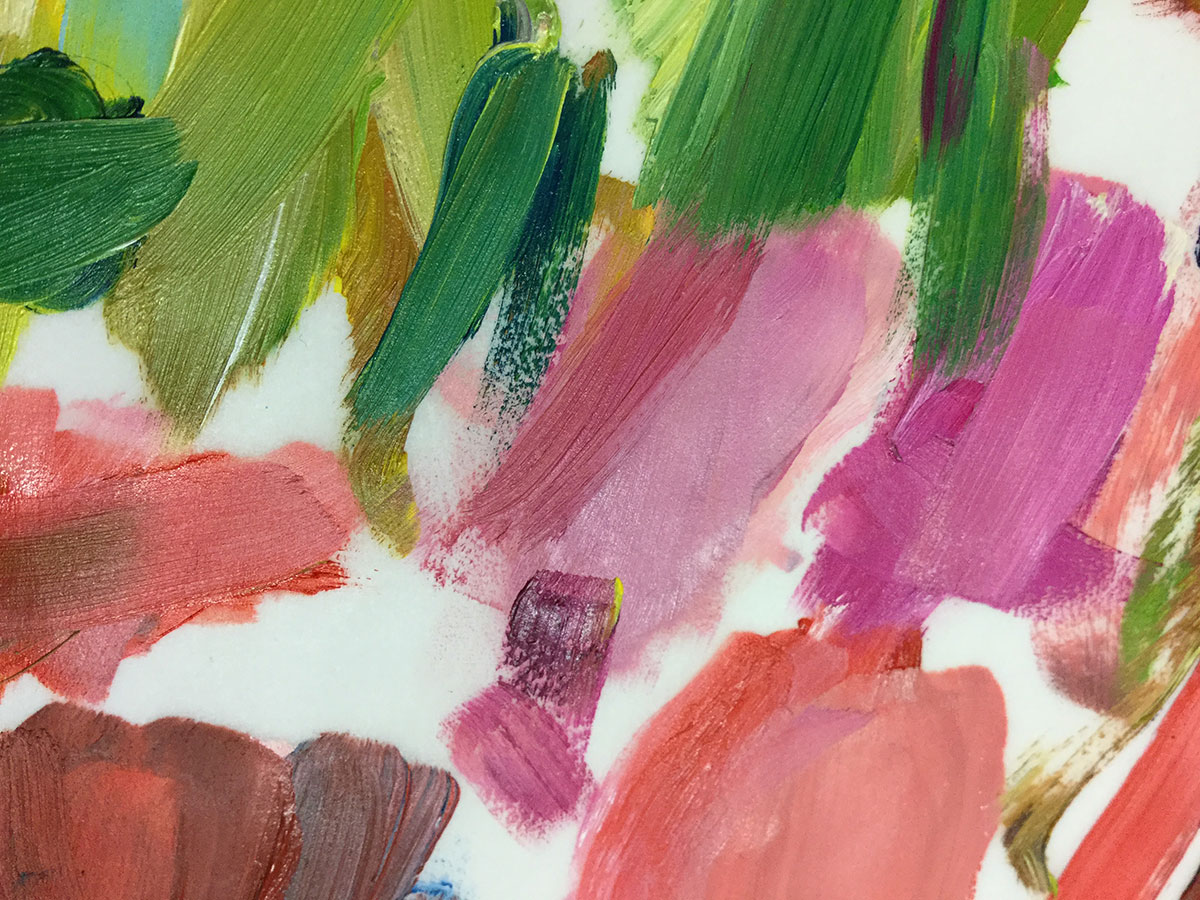 The Isaro Pink has a nice texture. 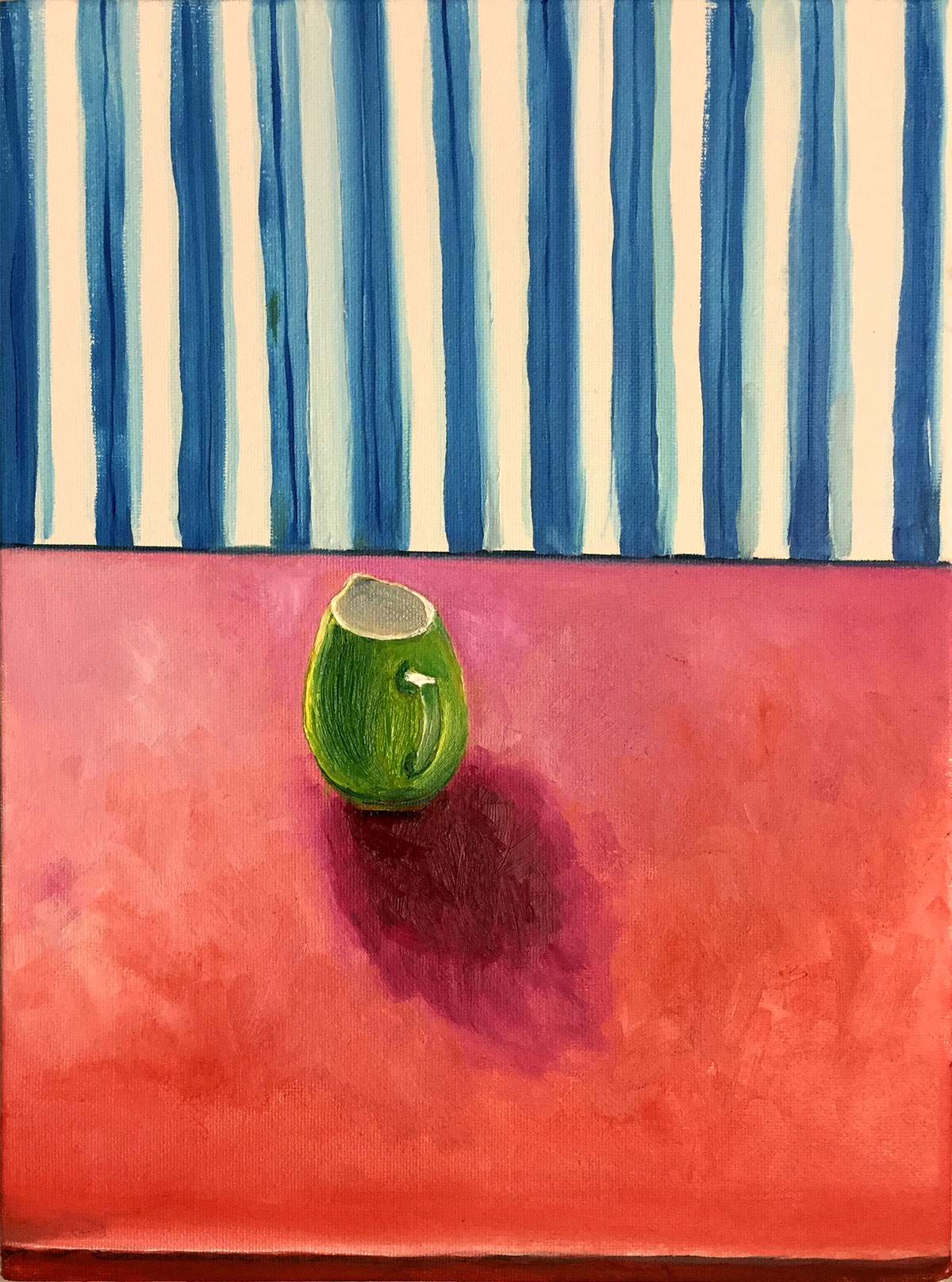 I painted out some colour squares, looking at four reds, four blues and some neutrals and I found some lovely mixes. Then I did a bit more mixing with my favourites from the first charts. Some stand-outs for me: the full, creamy body of the Cerulean Blue, the richness of the red-brown of the Perylene Red, the wide range of tints possible with the Isaro Pink. 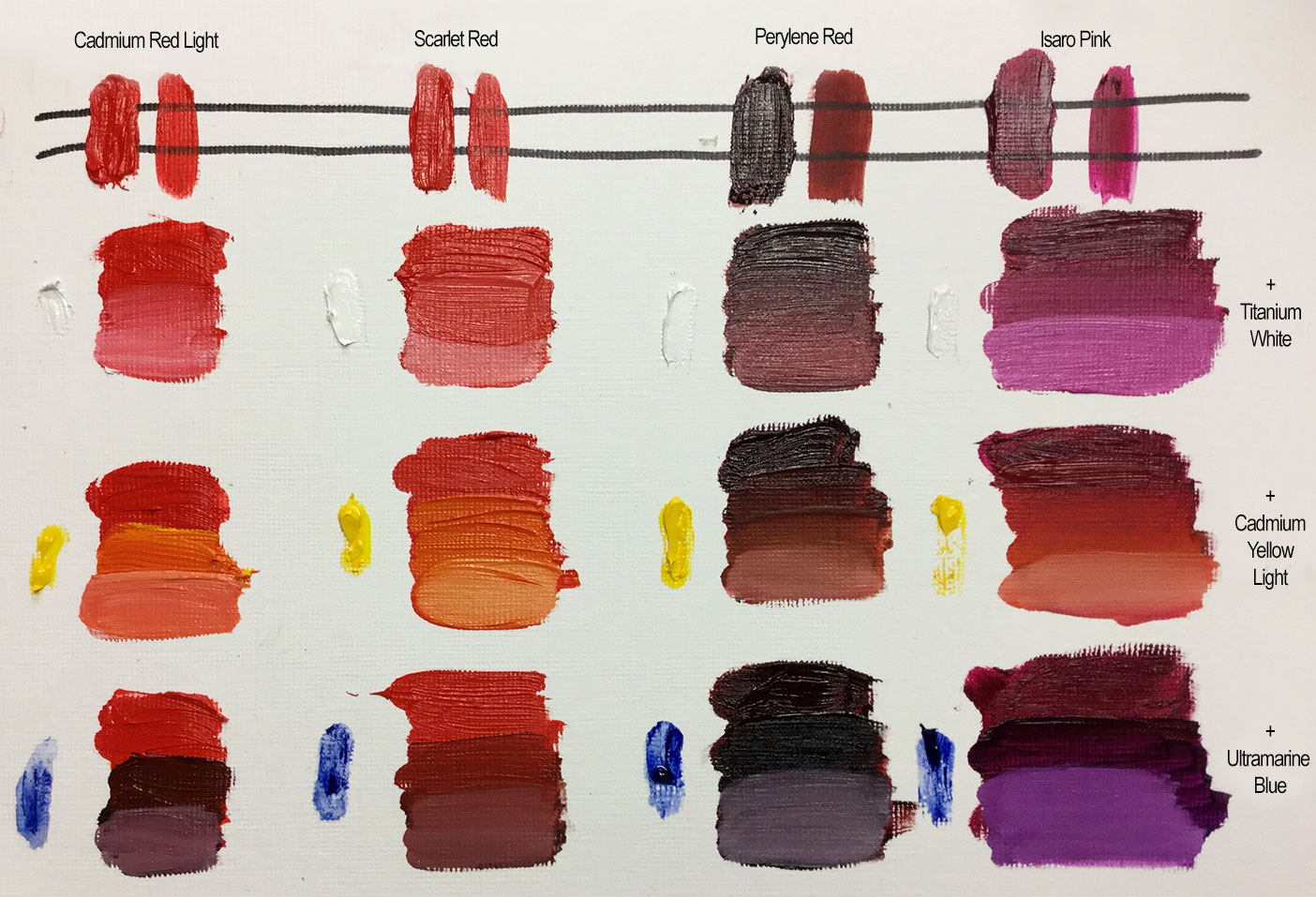 Some mixes with Isaro reds. 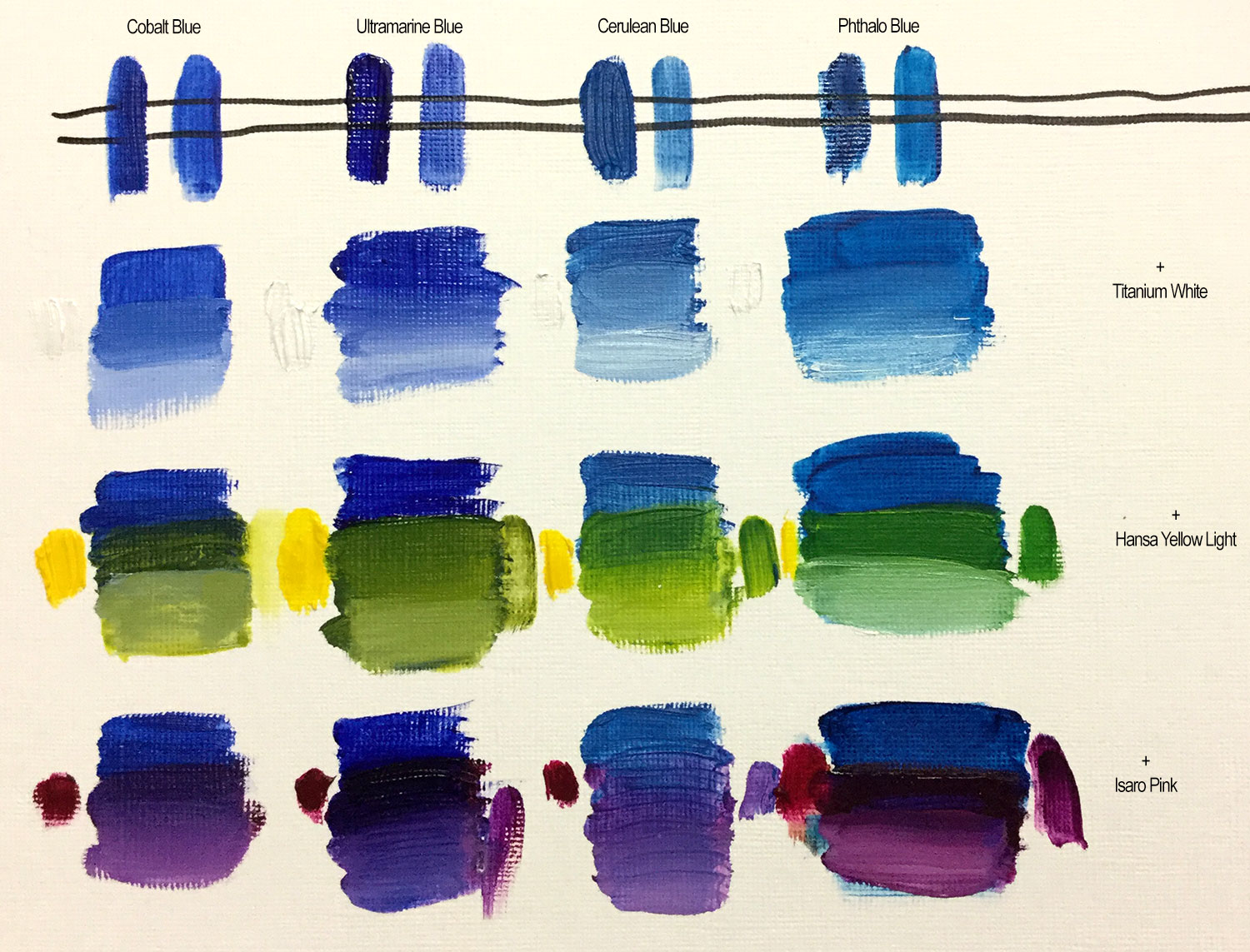 Some mixes with Isaro blues. 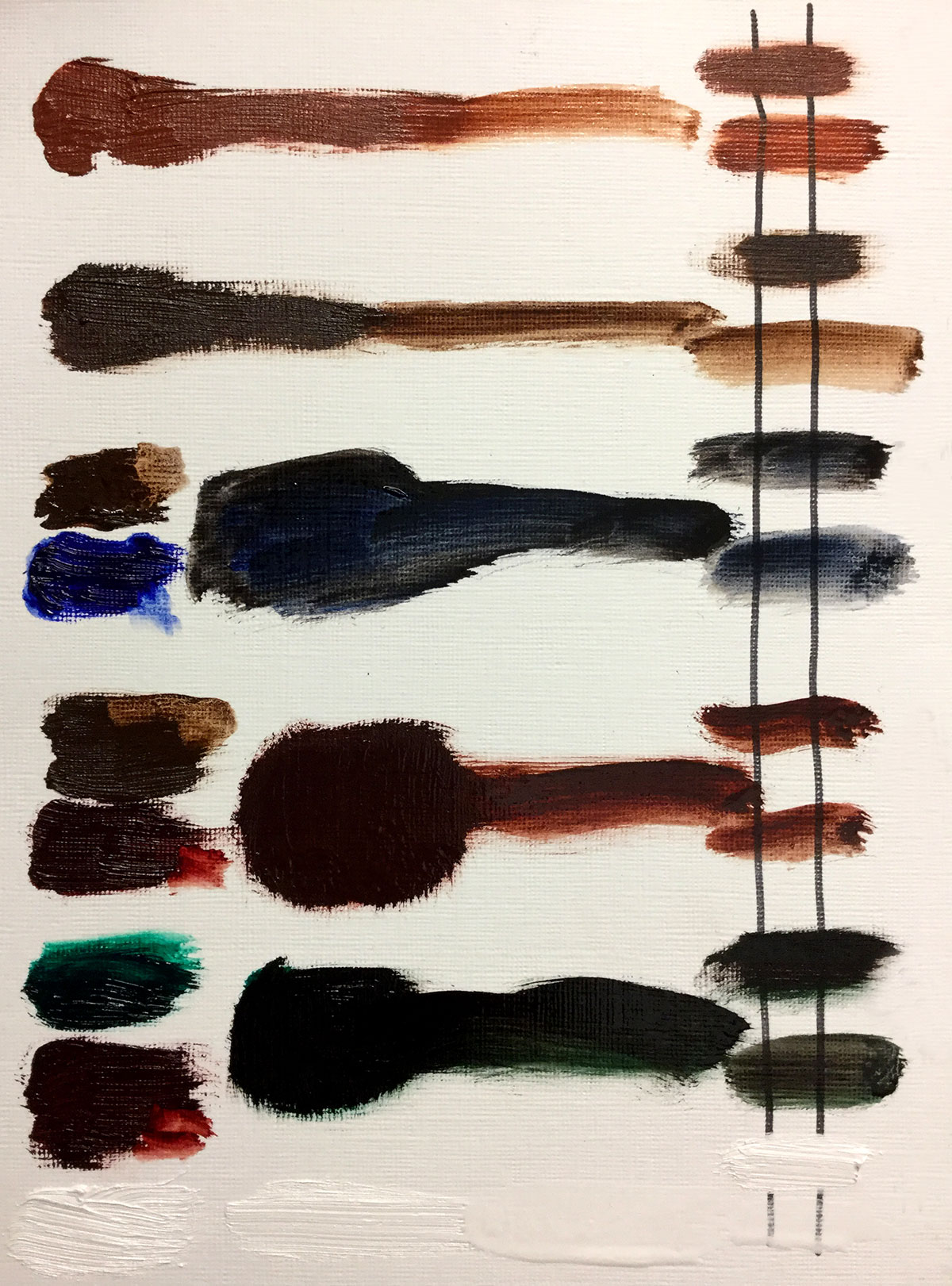 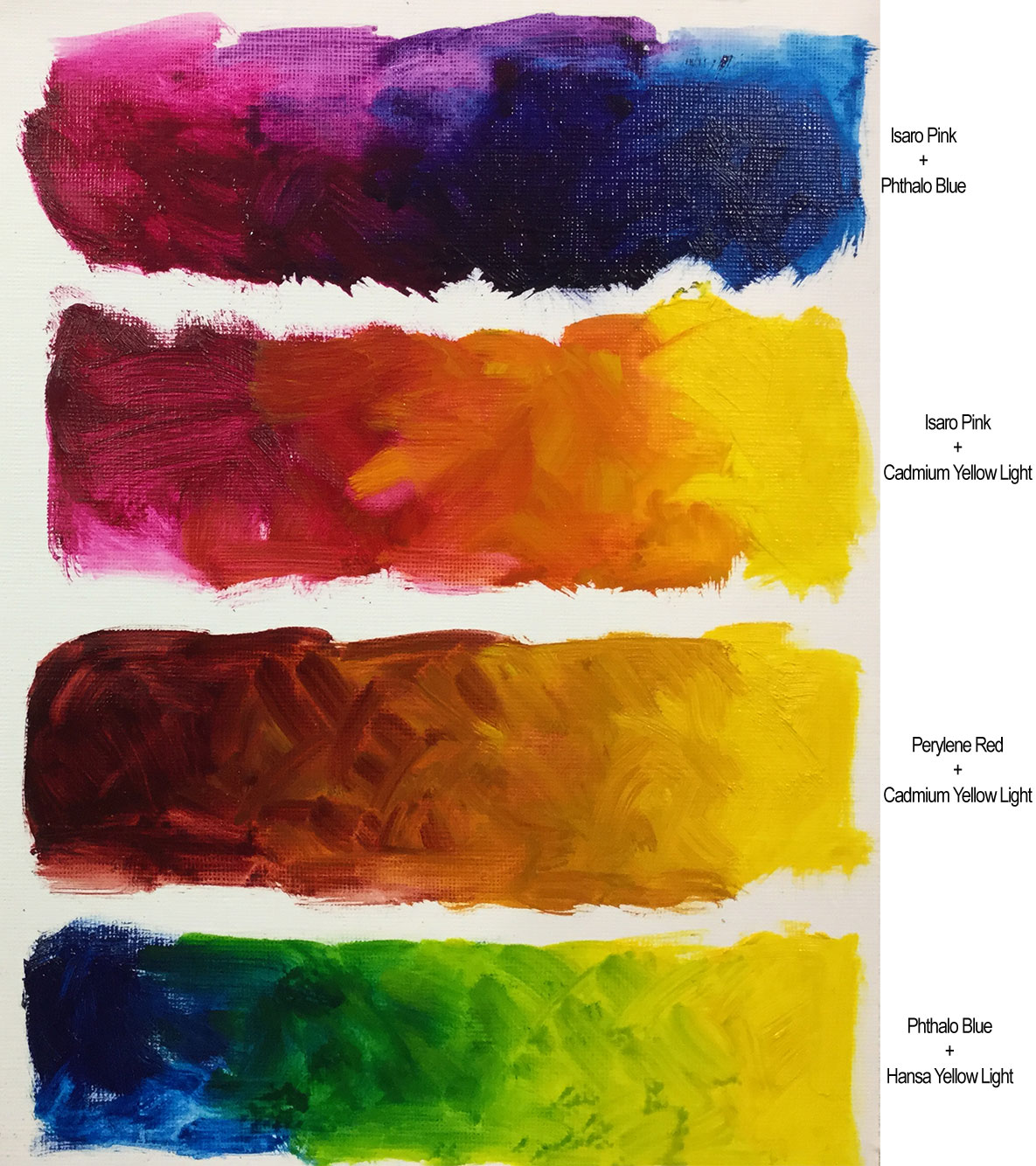 Some rich colour mixing combinations that I explored more after noticing them in the first charts. 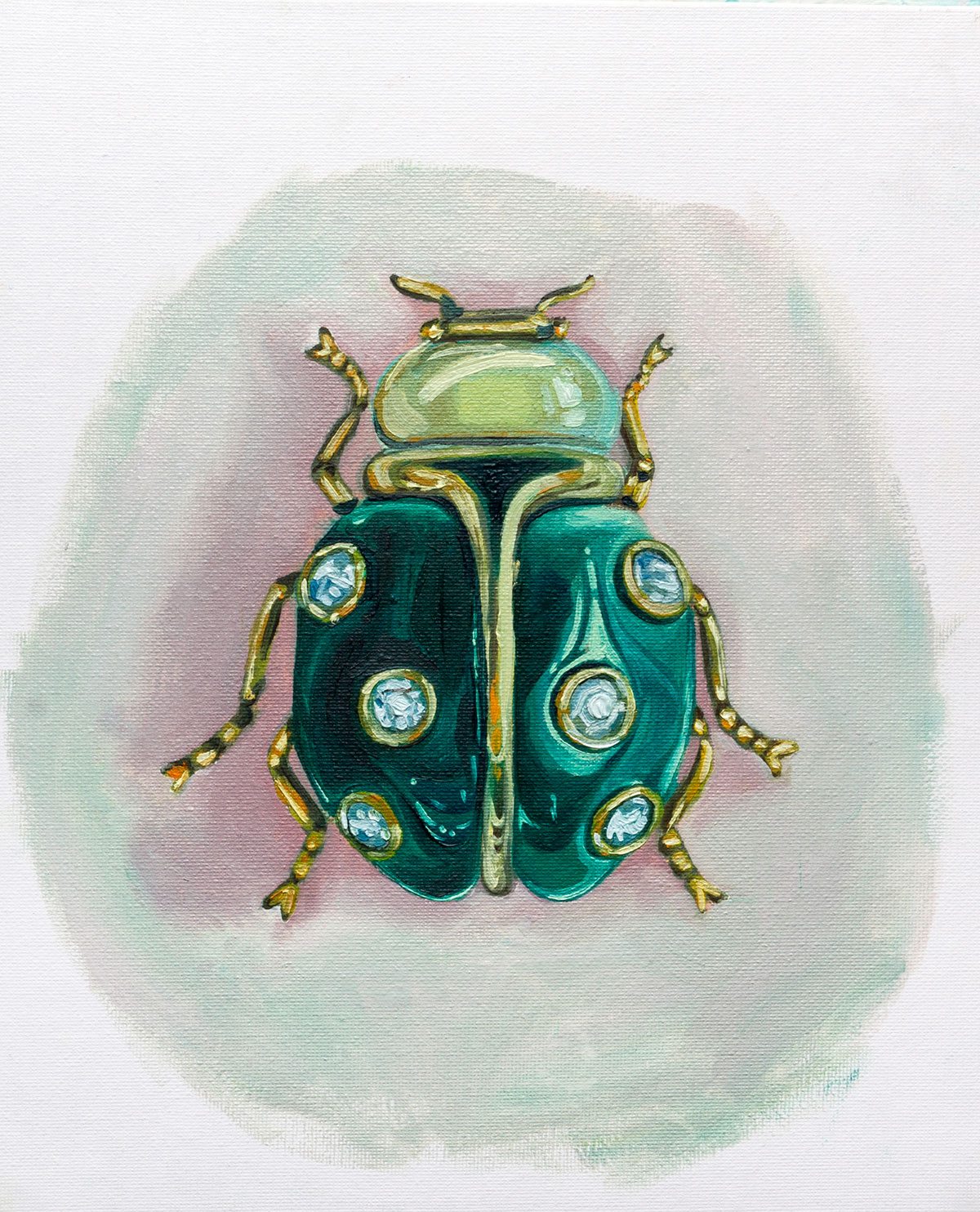 “The labelling of Isaro Colours is clear and concise, listing the ingredients on the back in a simple, well-sized table. Unlike many paints I’ve used, even the pigment details are written in a reasonably sized font which made me feel reassured that there weren’t any hidden additives or fillers. The front of the tube has a beautiful traditional design with a hand-painted swatch of colour making it easy to identify tubes when they’re in a pile. My only criticism is that the hexagonal lids are very angular – I had to use a cloth to open them to stop the corners hurting my hands.

The paints squeezed out easily onto the palette and had a lovely, subtle smell. Each colour varied slightly in viscosity due to their different pigment content, but not enough to be noticeable during my painting process. They had a wonderful texture that reminded me of butter that had been left on the side for a day; the paint would have held impasto marks but was easy to spread flat. 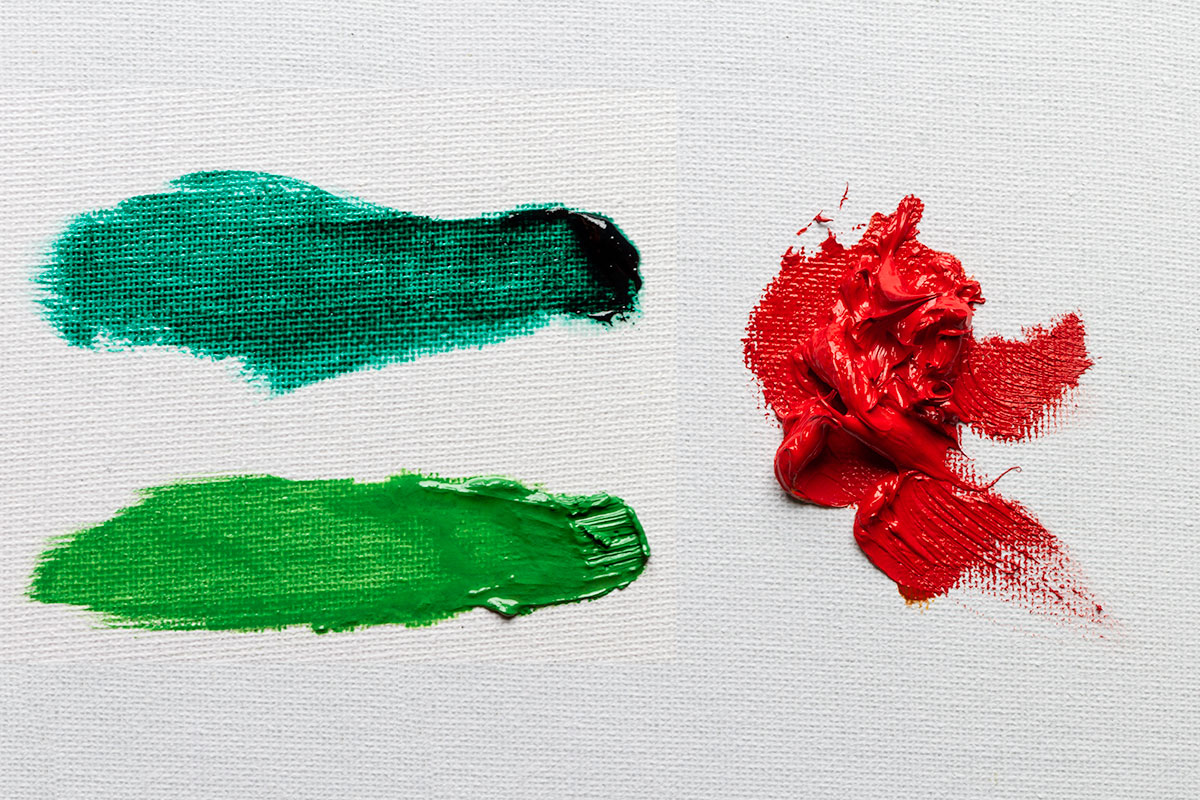 I began my painting by making an underpainting with washes. I did this by mixing various colours with Sennelier #Green for Oil, a fast-drying, solvent free oil painting medium (that we will be getting at Jackson’s Art soon). I was very surprised at the warmth, vibrancy and depth of the Burnt Sienna paint, it was a joy to work with. After letting this layer settle, I worked into my underpainting further with Phthalo Green – another exceptionally vibrant and transparent tone that when thinned, was full of rich hues. 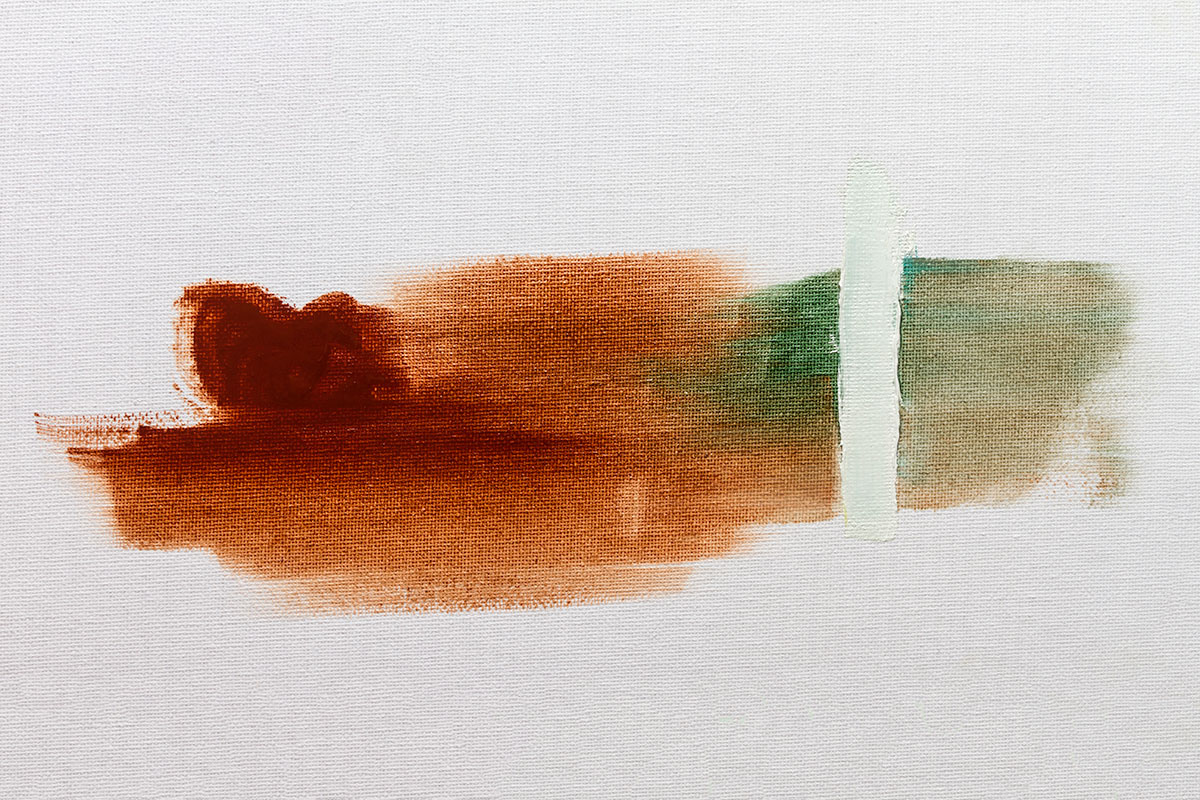 I then tested the mixing abilities of the paint by working over my wet underpainting with thick layers of paint without using any medium. The tinting power of the whole range was very strong (except the Cerulean Blue which, although it’s a stunning colour to use pure, requires a high ratio of paint to tint blends). As shown in my example of mixing Cadmium Red Light and Cadmium Yellow Light, the single pigment formula results in fantastically clean, bright colour mixes. The range also includes a great mix of transparent and opaque colours; Isaro Oils could be used to create wonderful glazes and solid blocks of colour, as shown in my example of painting pure white over a Phthalo Green and Burnt Sienna glaze. The exceptional covering power of the opaque colours also made them a dream to use as highlights because unlike cheaper paints, their texture and clean mixing meant they could be applied onto wet paint and stay bright. An example of this is the highlights and lowlights on the jewels, legs and metal work in my bug brooch painting – all of these details were painted on while the rest of my work was still wet.

Overall, these are fantastic paints that I would not only recommend, but love to use again.” 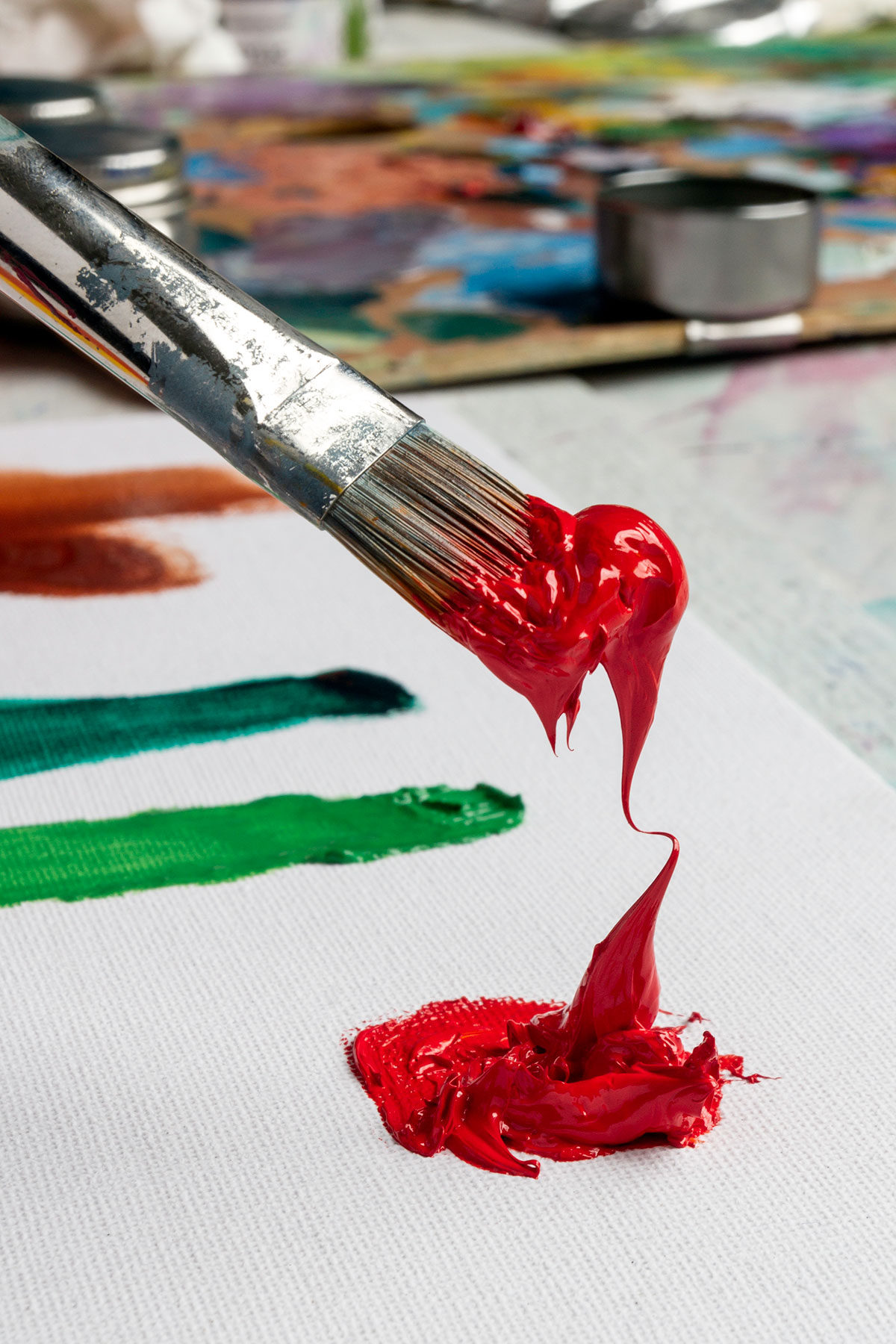 The Heritage of Isaro Oil Colours 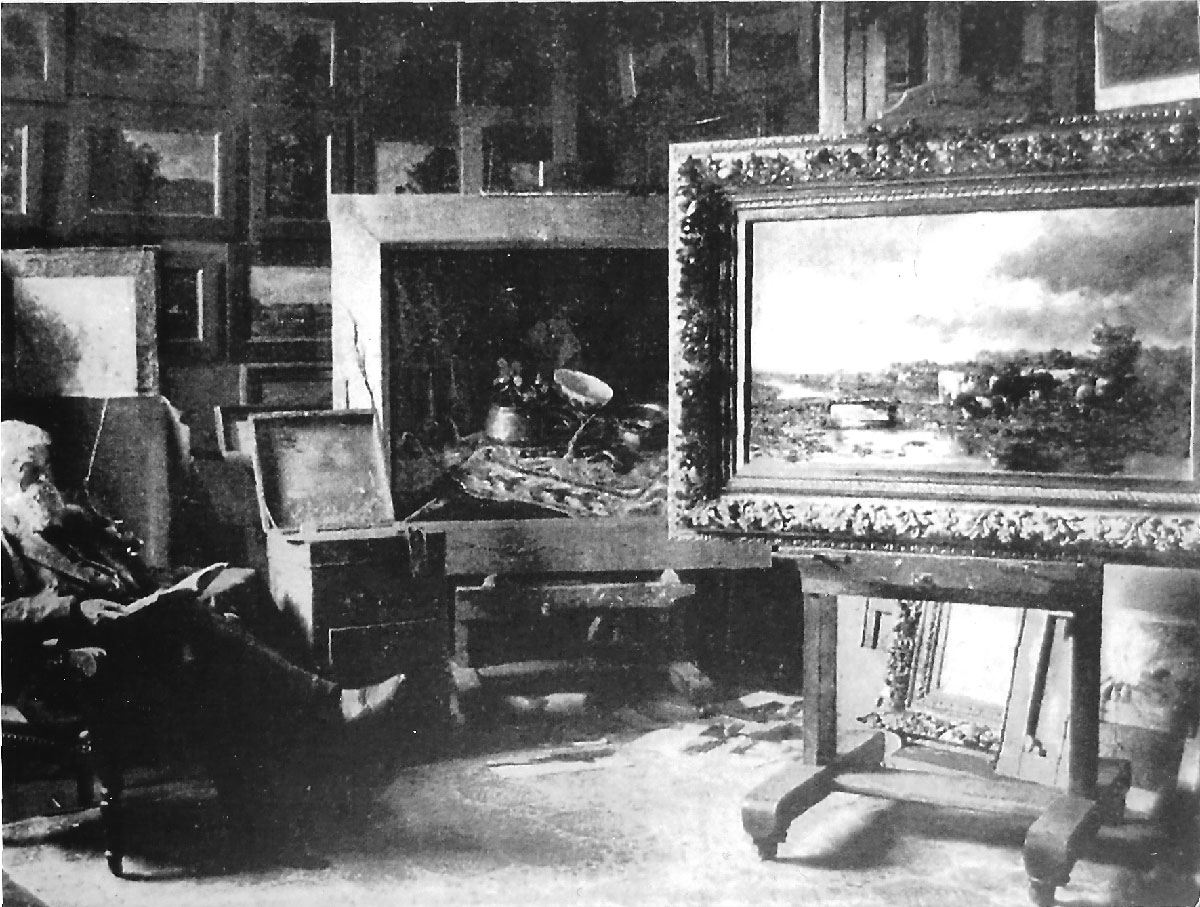 Art and painting were a big part of Isabelle Roelofs’ childhood. Her great-great-grandfather, Willem Roelofs, was a painter. You can see his paintings in the Netherlands (Rijksmuseum and Gemmentemuseum Den haag), Belgium (Royal Museum of fine arts of Belgium), France (Royal Museum of Fine Arts of Lille ), and his works are also exhibited in Brazil. His son, Isabelle’s great grandfather, Albert Roelofs, was also a painter. He taught painting to Crown Princess Juliana from the Netherlands. At the beginning of the 20th century he founded a small factory with his friends, including a chemist, where they made oil colours. Albert’s knowledge as a discerning artist stood him in good stead for making quality oil colours which soon gained an enviable reputation amongst the members of artistic community. Albert died in 1920 at the age of 43, but the company continued until 1980 under the founding members and Albert’s son, Isabelle’s grandfather. Isabelle’s father helped her grandfather for a few years, but instead of moving the paint factory to Belgium where her father now lived, her grandfather sold it. 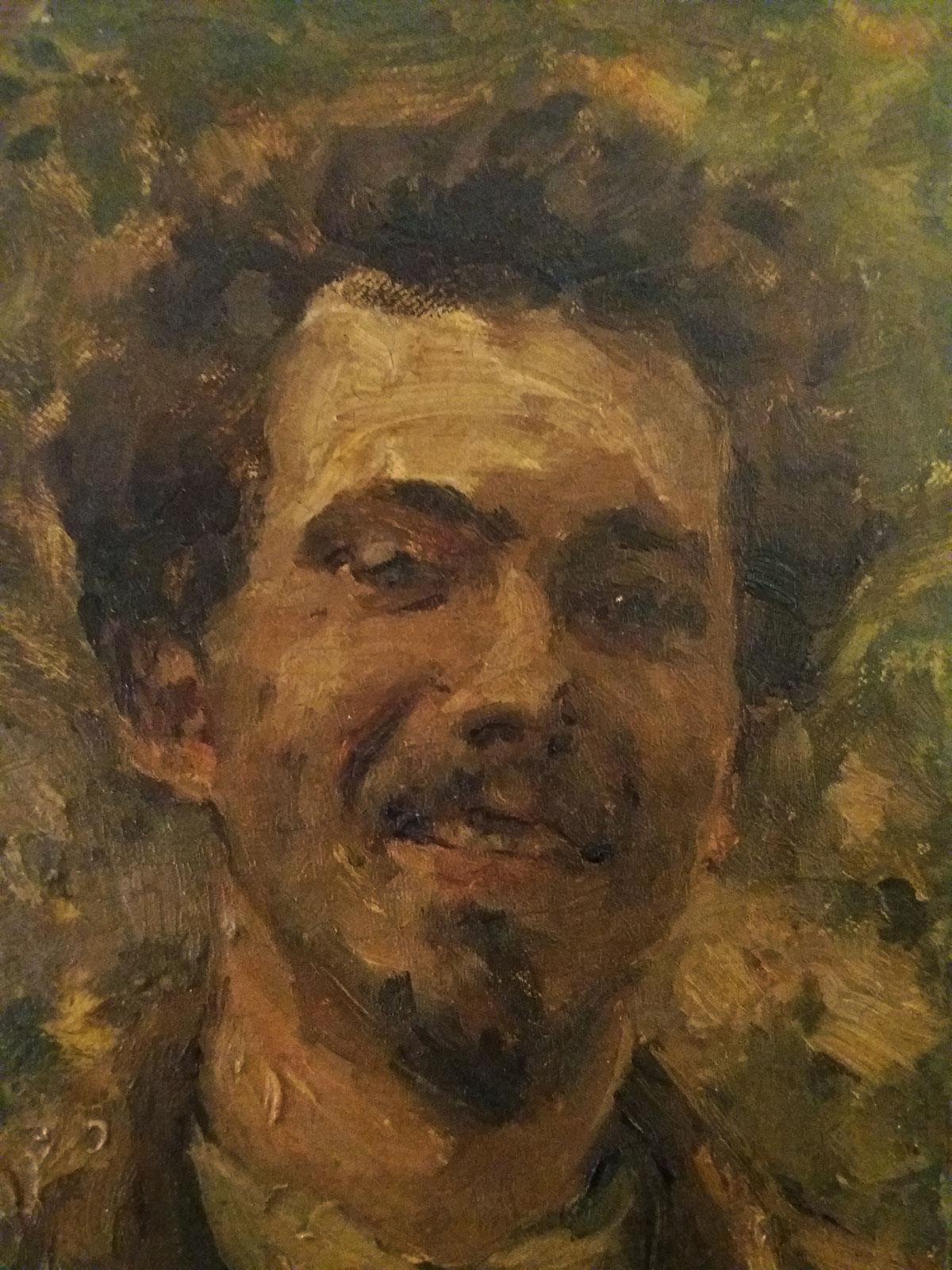 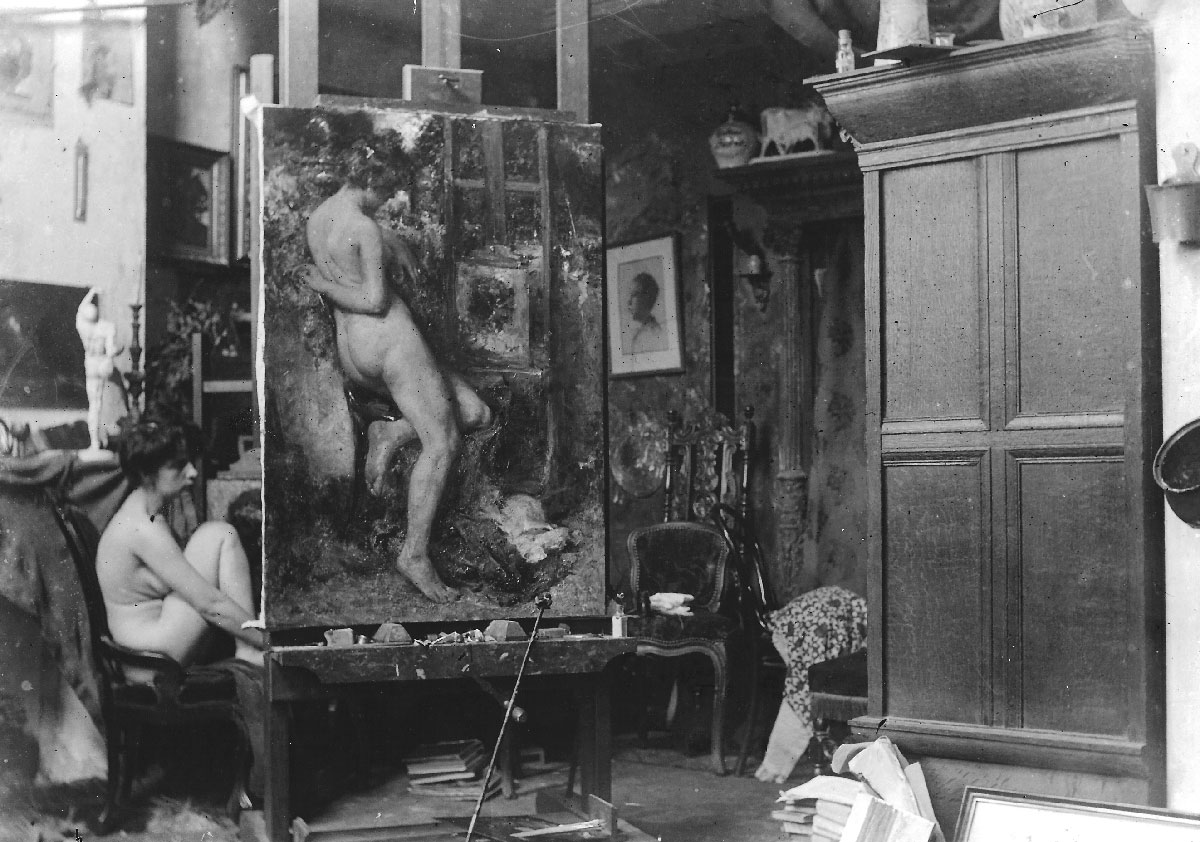 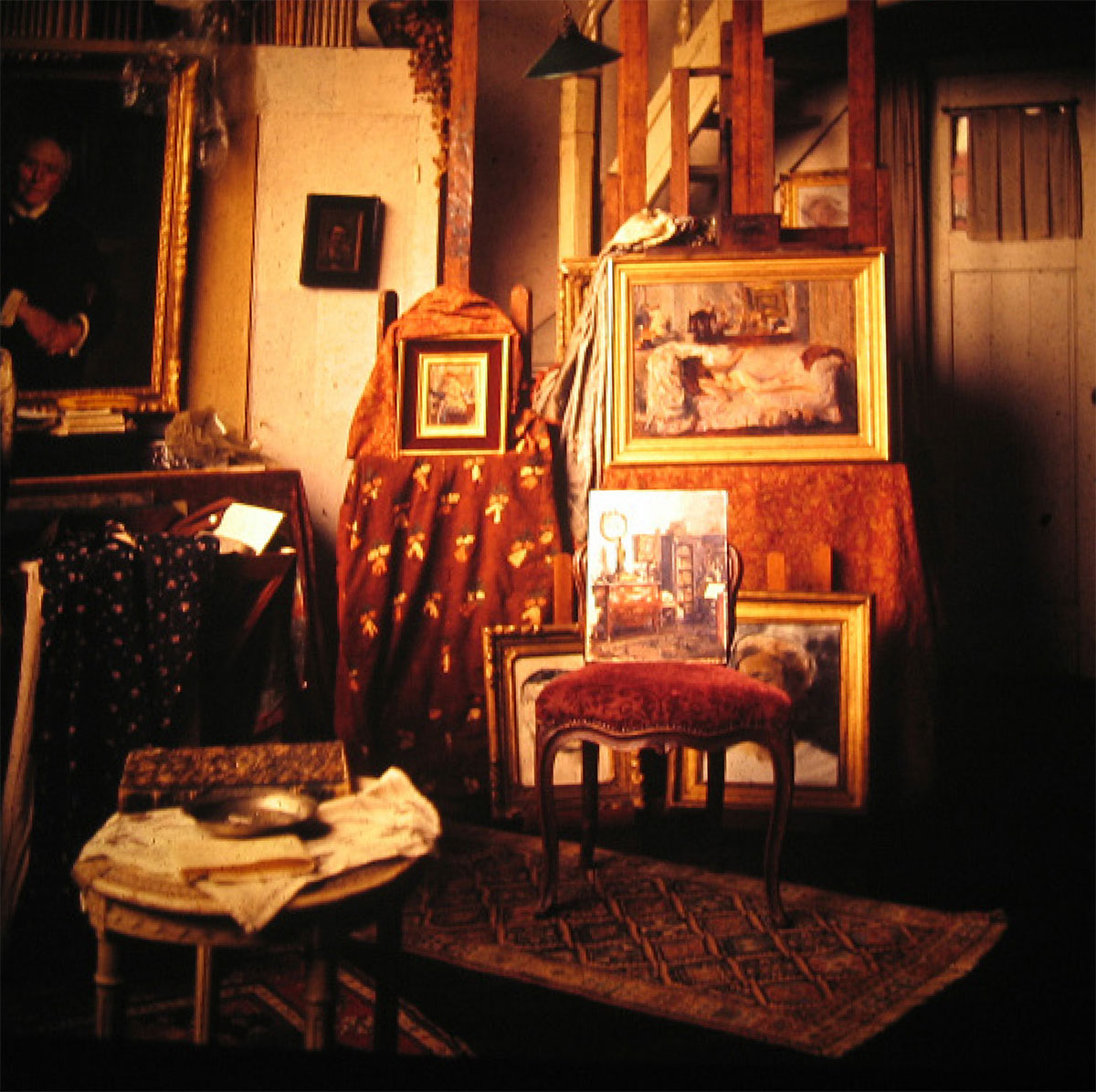 After she completed university Isabelle wanted to relaunch her family’s paintmaking heritage and founded Isaro. Her father designed all of her factory’s machines. She worked with samples of colour that her grandfather made. She improved some colours using modern lightfast pigments such as quinacridone, perylene, and phthalo. She also listened to the requests of professional painters, taking a lot of advice from the artist Fabien Petillion. Her strong interest in the history of colours and the use of pigments led to her co-authoring a book in 2012 with Fabien Petillion, ‘La Couleur expliquée aux Artistes’ (Colour explained for artists); unfortunately there is no English translation of the book available at the moment.

Click on the underlined link to go to the Isaro Oil Colours on the Jackson’s Art Supplies website.
Postage on orders shipped standard to mainland UK addresses is free for orders of £39.