In it’s inaugural year the Trinity Buoy Wharf Drawing Prize is increasingly being referred to ‘The Drawing Prize Formerly Known as The Jerwood Drawing Prize’. This follows the rename of the country’s most prestigious Contemporary Drawing Prize and Touring Exhibition. Caroline Burraway’s astounding large format drawing of a young woman named Eden from the Calais Jungle was the rightful winner of first prize. Stark, beautiful and humbling, Caroline’s drawings portray both human vulnerability and strength. Viewers of both her shortlisted works will see a powerful tribute to the spirit of those fighting for their right to live a civilised and peaceful existence. 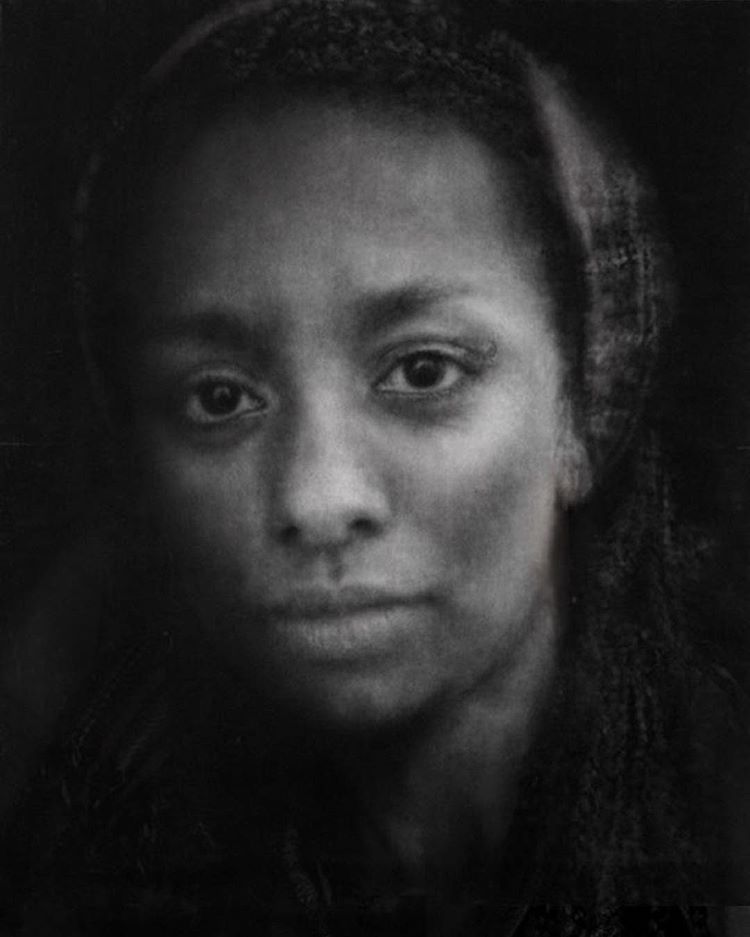 Lisa: Can you tell us what it was like to visit the Calais Jungle? Did you know before you left that you intended to draw portraits of some of the people you encountered?

Caroline: The Jungle was very different than I had expected through my understanding in the media.

I remember clearly thinking it was unbelievable that this sprawling shanty town with its slum conditions, squalor and rubbish everywhere could exist in the developed world. The juxtaposition to the clean ‘neat’ town of Calais and just some 30 miles from the borders of the UK was alarming.

However despite the conditions, I encountered a strong sense of humanity and community amongst the residents and in the many restaurants, shops and bars which had sprung up and which appeared to cross nations and religious boundaries. 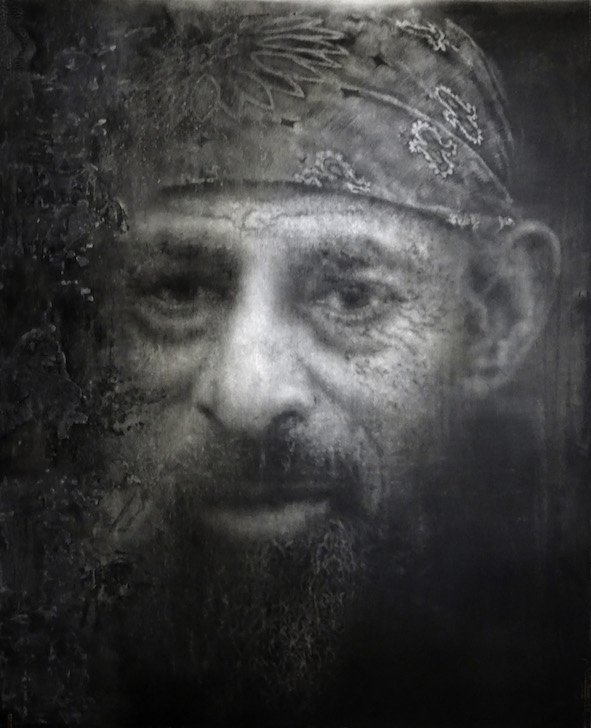 The residents, mainly men were generally friendly but there was a certain unease as they questioned your intentions and didn’t want you to take any photographs. In keeping with the ethnographic imperative that runs through my practice, I would spend time with the people I met, hoping to build a bedrock of trust before asking them to be involved in the project. I explained that I was not a journalist but an artist and was trying to do something which may help people to see the reality and isolation of those living in the camps.

The process of my enquiry and observation is explored and understood through the materiality of drawing, so yes, I knew that I would draw the faces of some of the people I would meet in the Calais refugee camps. 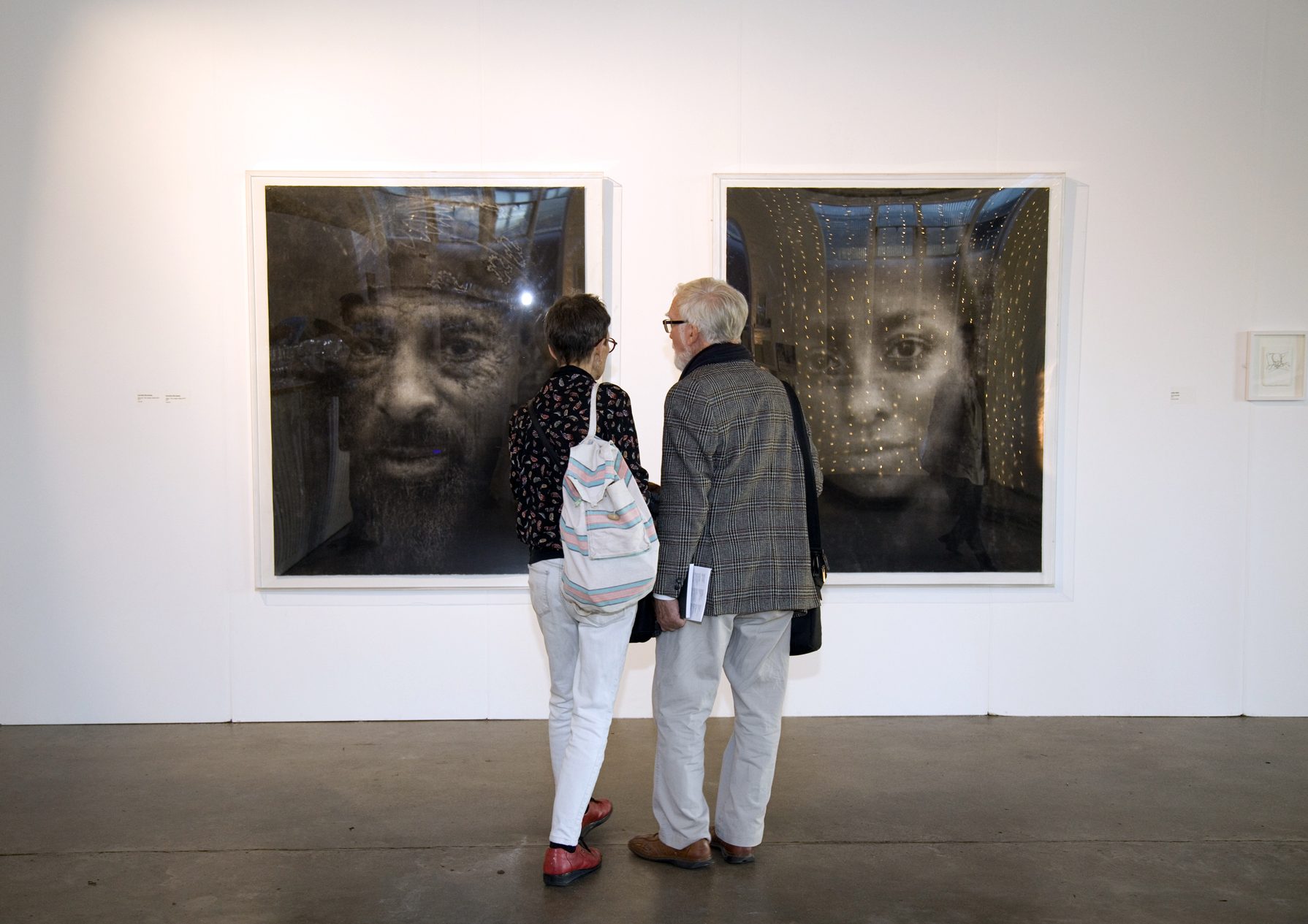 Lisa: What was it about Eden that you found particularly inspiring?

Caroline: Eden, a young woman from Eritrea, lived between the Jungle in Calais and a small camp in Isbergues with no sanitation, no water. She was living in a cramped tent with three other people, including a heavily pregnant woman. She was one of the comparatively few women I saw in the camps and one of the few who would engage with an outsider. I hope her serene quality and gentleness is translated in the drawing. 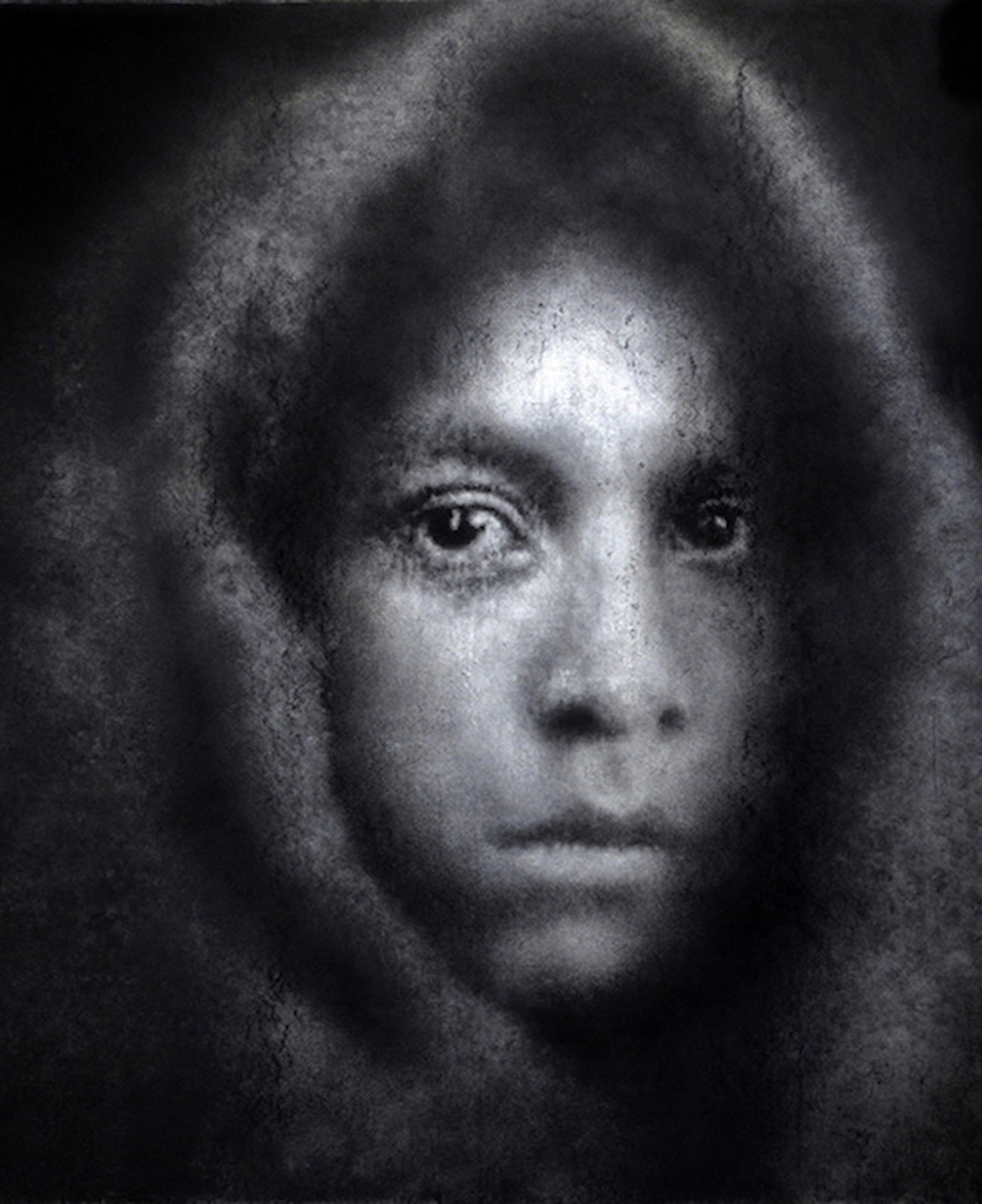 Lisa: Do you feel a responsibility to use your art to bring the struggle of others to the attention of your audience?

Caroline: Art should speak to us, make us think, make us ask questions of it and of ourselves. If it fails to do so then it has failed. My work aims to confront socio-political issues that lie at the core of modern society and to increase public awareness and encourage critical debate. 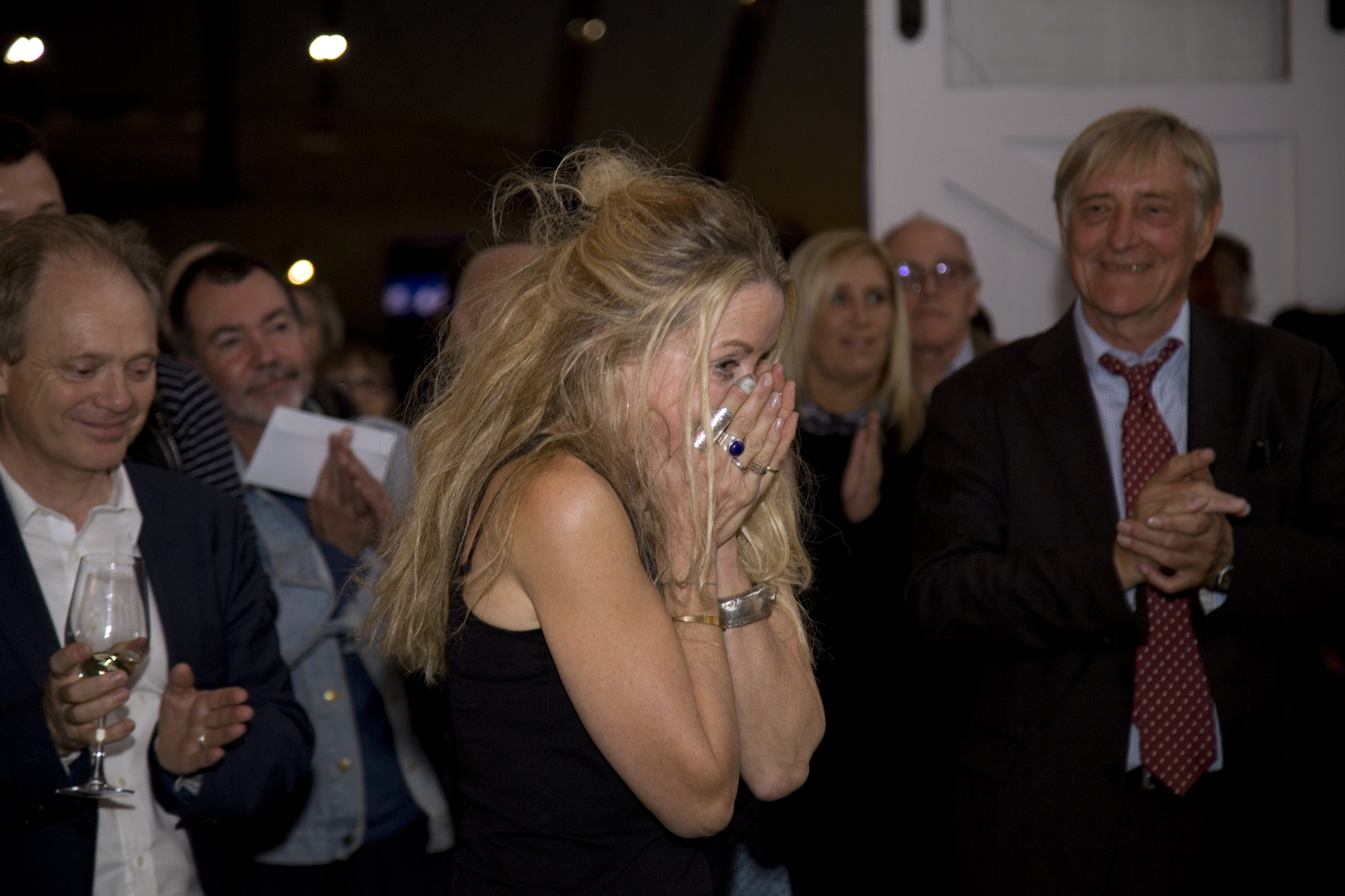 ‘Eden’, the winner of the TBW Drawing Prize and ‘Samuel’ also shortlisted are not portraits of individuals but the ‘faces’ of all the human beings, the stories and the voices behind the mugshots and biometric data collected today at the borders of the European Union.

These images are, in many ways, a form of protest and also a call to arms. They are a counterforce to the new wave of right wing populists making headway in Europe. 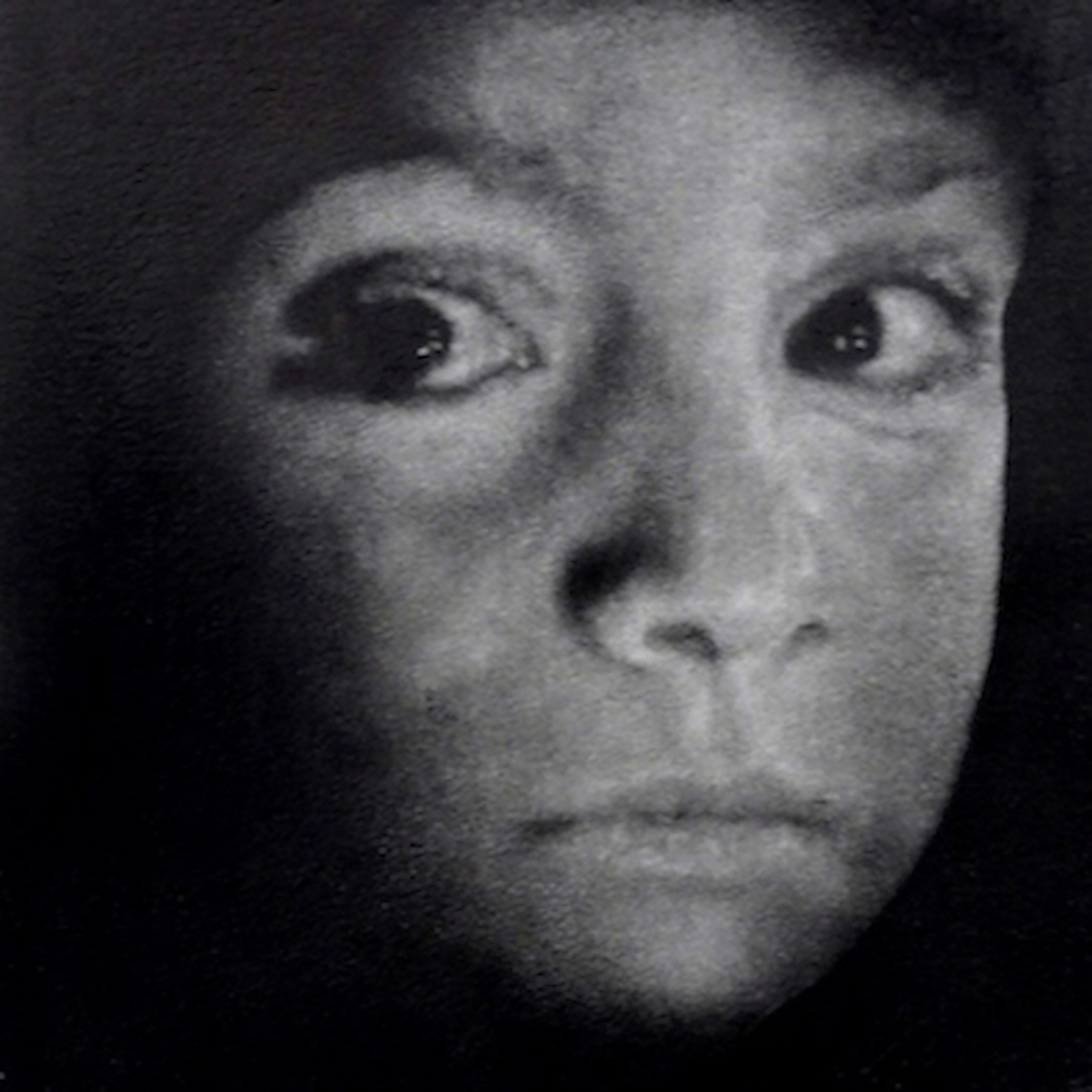 Lisa: Do you have any hopes of how your work might make your audience feel?

Caroline: The role of the viewer in the works is paramount insofar as the work is an attempt to set up a conversation between the viewer and the viewed, calling for a humanistic response to problems of displacement and dispossession and to remind ourselves of the need to respect the difference intrinsic to the human condition, to acknowledge the Other as a living, breathing presence, not an expendable object.

The point of my drawings is to push the viewer into a world they may otherwise turn away from, particularly in a compassion-fatigued world where the relentless circulation of images has shaped increasingly dangerous forms of apathy and indifference.

Through the physicality of the artist, the drawings allow a sense of distance, a time to step back and reflect. You may see something of yourselves, your own small history. Maybe then you’ll begin to understand something different. And maybe then begin to change. 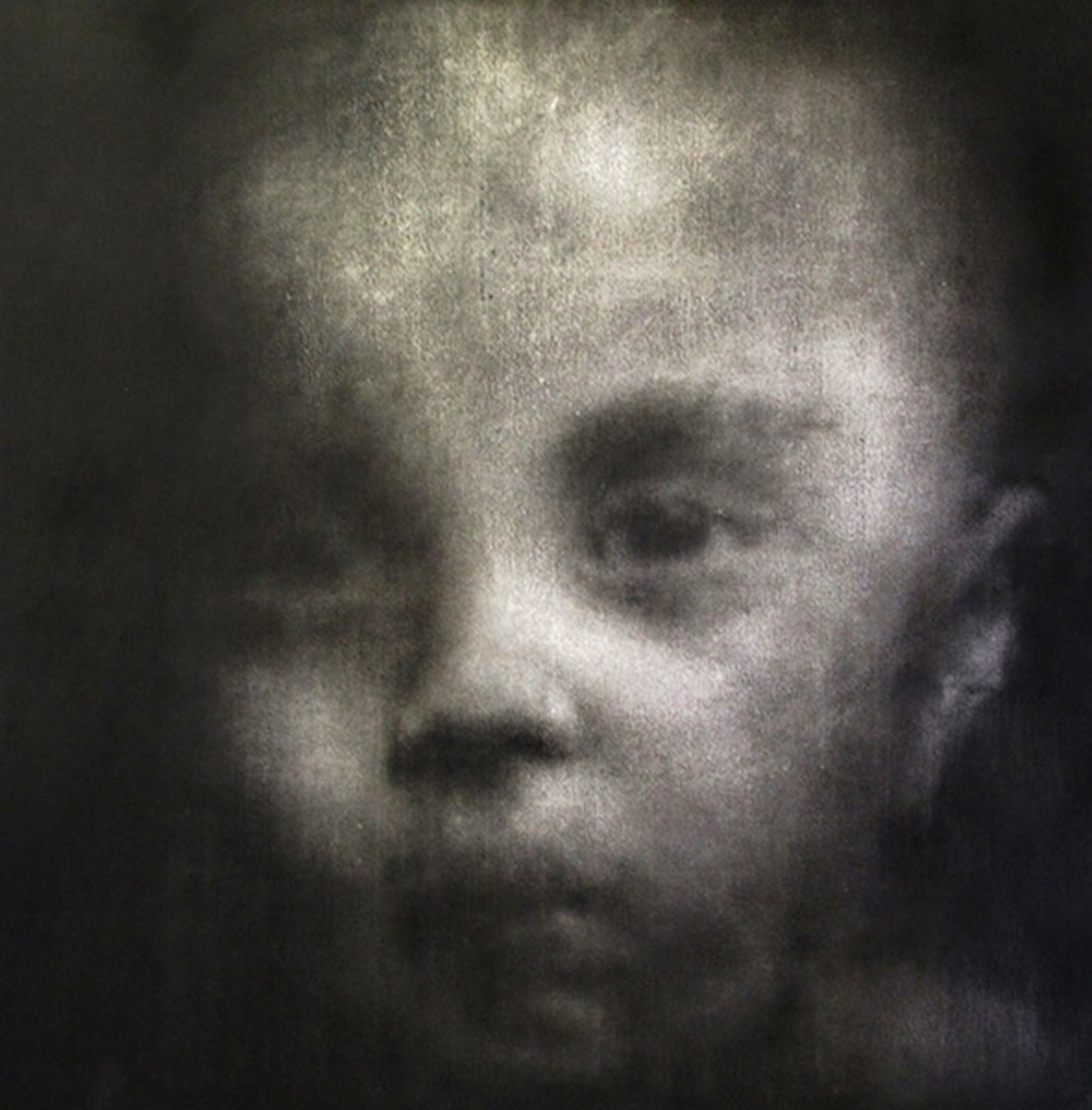 Lisa: Looking at the actual construction of the drawing…. how important was the paper you used, and how did you achieve the tonal depth that you have?

Caroline: I achieve the depth of the drawings through the many layers. I constantly put the charcoal down and rub it away through whatever means, fingers, rubbers, sandpaper, wire wool, scalpels, bleach …. I endlessly construct and deconstruct the image. The paper, a rough texture heavyweight watercolour paper needs to be strong to survive this and in some cases I go through and have to patch in. 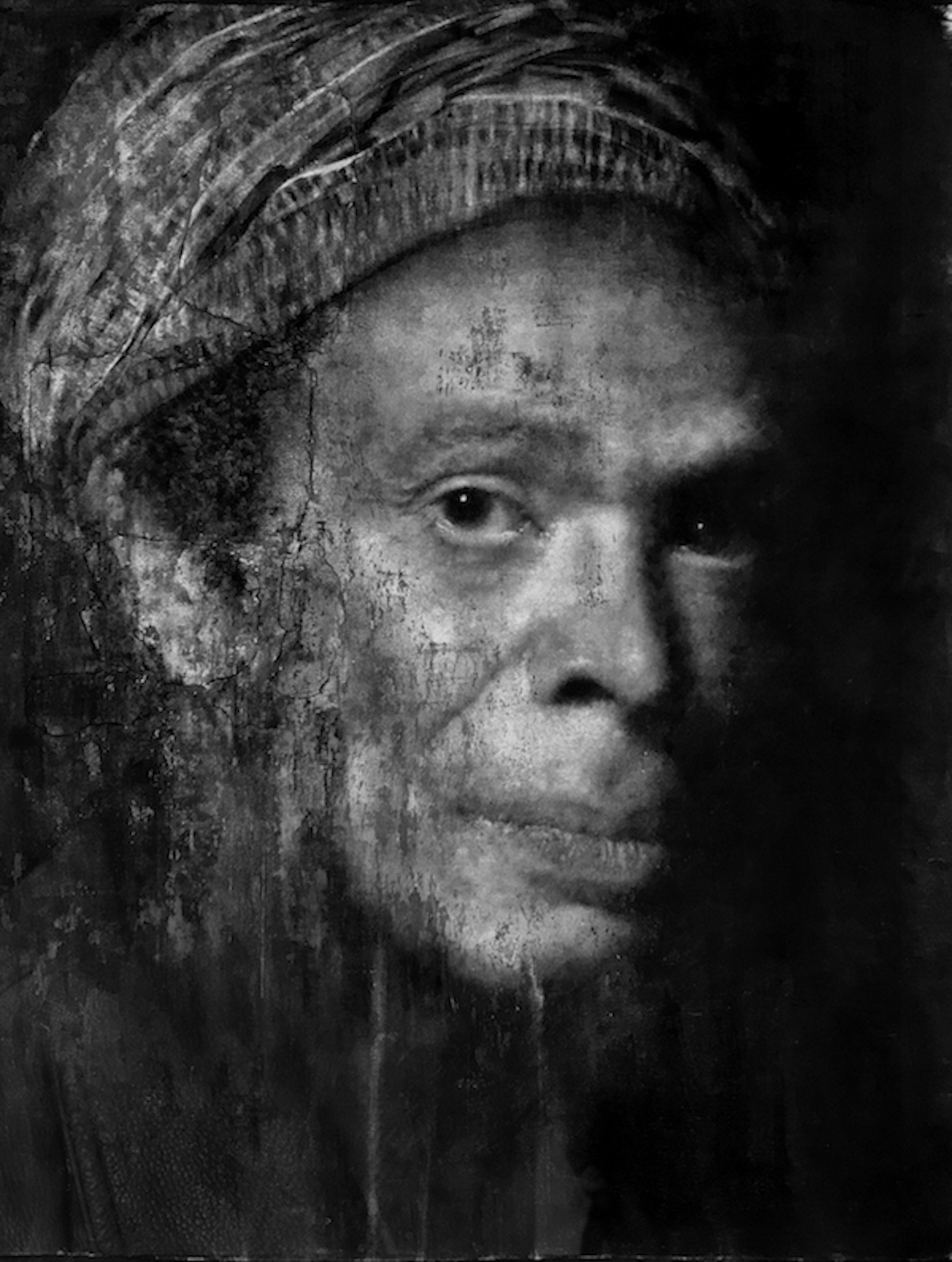 Lisa: How does the process of drawing these faces alter how you feel about the experience of meeting them?

Caroline: The content of my work is explored and realised through the form of the act of drawing. Drawing is an ongoing process that is never fully completed. At some point, I put my charcoal down, but I am never really finished.

The source image I initially work from is not the image I end with. The drawing is the journey from beginning to end, it is everything in-between, it searches for the ‘essence’ of who they are, yet at the same time absorbs my identity into the blackness, into the lived trajectory of the image, forever stretching the boundary between self and Other.

My work is the material embodiment of this tension between intimacy and objectification. It is my sincere hope that that the former proportionally outweighs the latter.

Lisa: Where do you make your drawings?

Caroline: I have a studio with lots of natural light and enough room to constantly step back from the large drawings. I have a library of art books I have collected over the years which I refer to constantly. 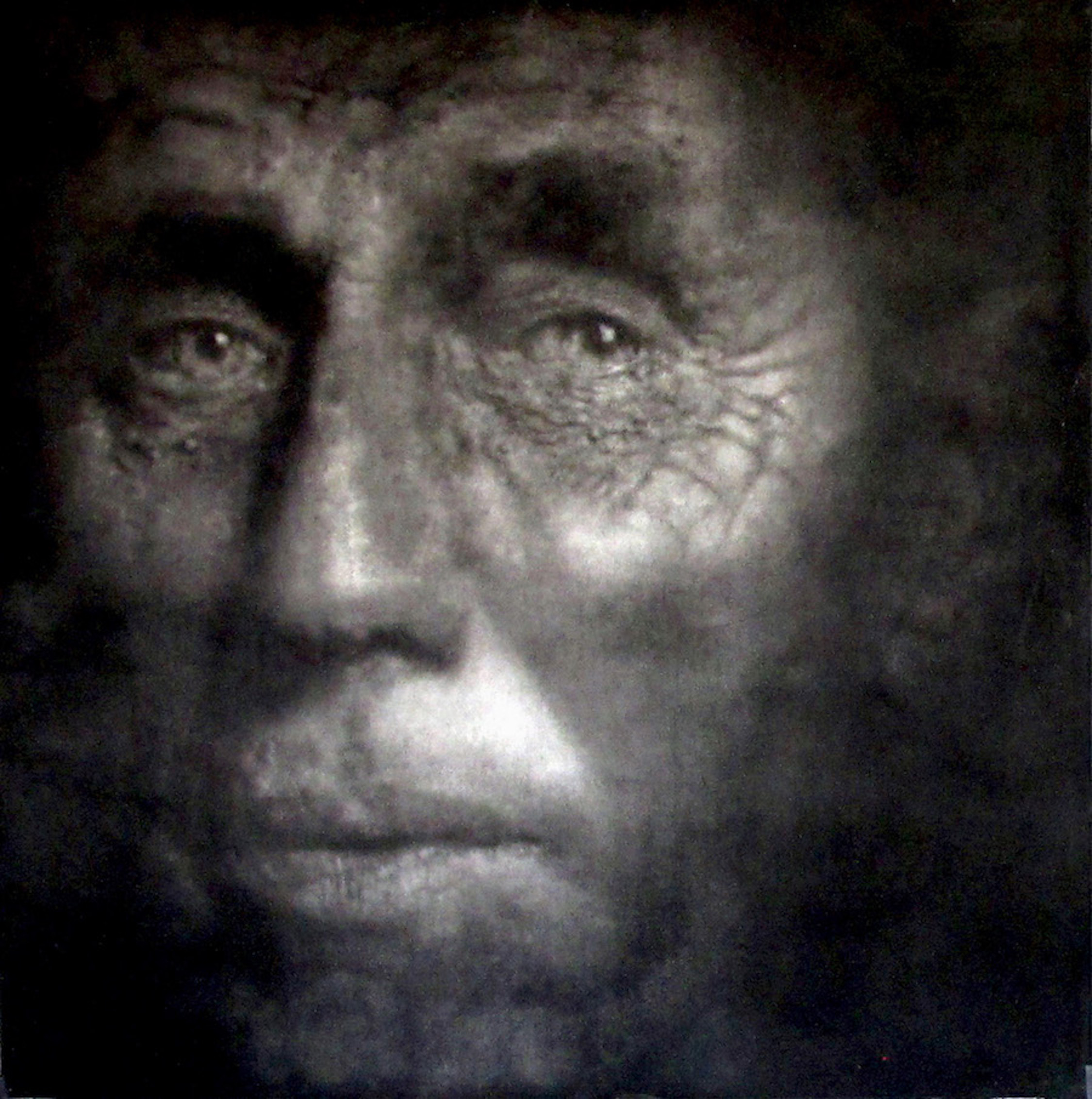 Lisa: What is a typical day in the studio like for you?

Caroline: I normally start around lunchtime after I’ve had a run and walked the dogs. I then work listening to music with my bulldogs and have constant coffee and chocolate. Sometimes at the end of a long day, normally late at night if things are becoming too ‘easy’, too ‘perfect’ I will deliberately destroy the work before I stop for the night. I may throw bleach over it or sand it back with an electric sander. I want to look at the work the next day and have something to work at, make it more ‘real’ (not to be mistaken for realism). How real the work is will be read through the representation of the drawing. 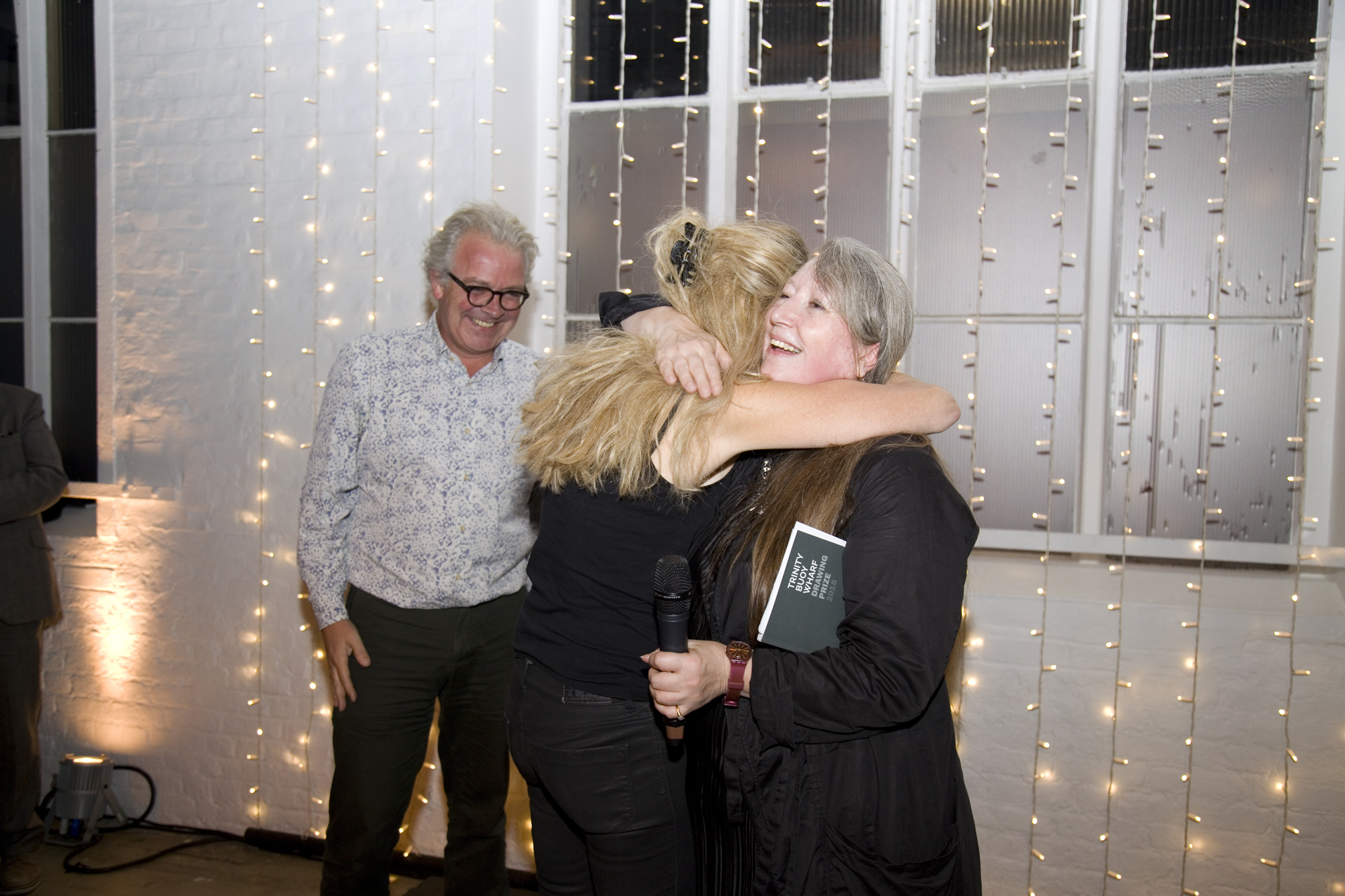 Caroline: For the last few years I have been undertaking a critical genealogy of human displacement. This dates from the 19th century into late modernity. I am tracing the socio-political abjection through narratives of loss and movement.

Earlier this year I undertook a filming project in the Greek refugee camps. I followed the everyday lived experience of a young Syrian refugee. He had reached Greece after many attempts across the sea. Assad’s military had shot at the young man before he was captured by Daesh. He finally escaped when a bomb fell. After I filmed in the camp I flew with him to Belgium. There he was reunited with his family after more than 10 years. I am editing the film and working on large scale drawings taken from this research material. Now I am setting up a project in the Lesvos detention centre.

I have also recently exhibited in the AIAPI/UNESCO International Exhibition on Human Rights in Trento Italy. I showed a small mixed media tableaux which is part of an on-going series. It connects my work with artists through the centuries who have depicted the abject ‘Other.’ 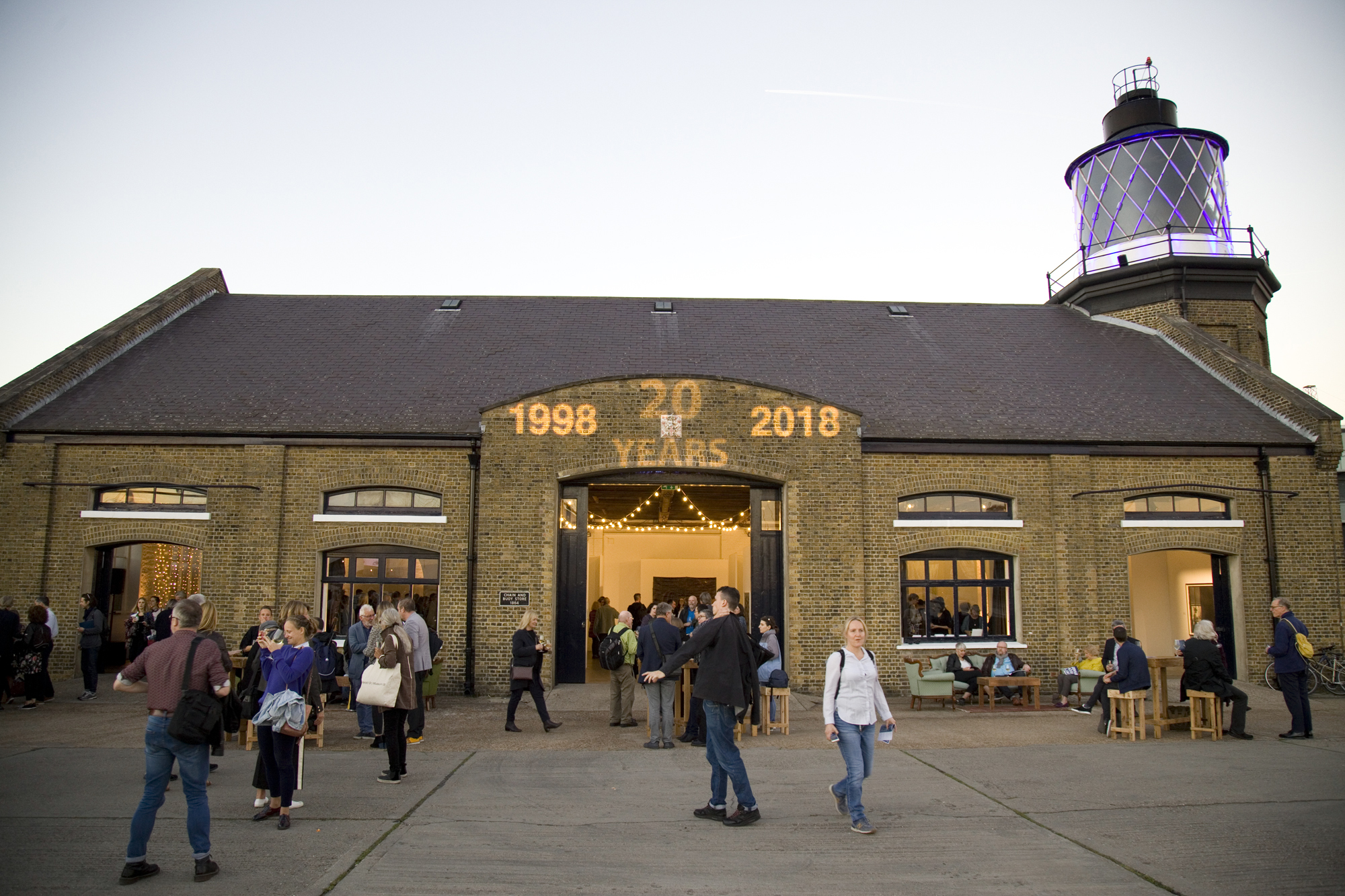 Trinity Buoy Wharf on the night of the Prize Giving, 2018

I have written a piece for Interalia Magazine on Drawing as Process,

Roman Szmal is the maker behind Aquarius , a range

From heavy body to fluid acrylics, we stock thousa