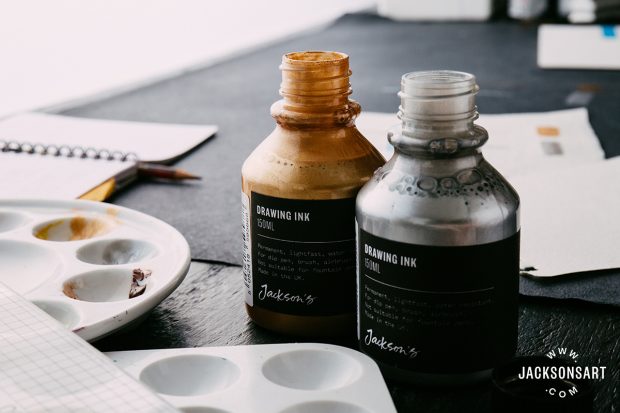 Metallic inks are a great way to add accents, detail or interest to a piece, as well as providing you with the opportunity to create a completely reflective work. However, knowing what to look for in a metallic product and predicting how it will behave with your usual art materials can put artists off. We tested our Jackson’s Metallic Drawing Inks so that you know what to expect. 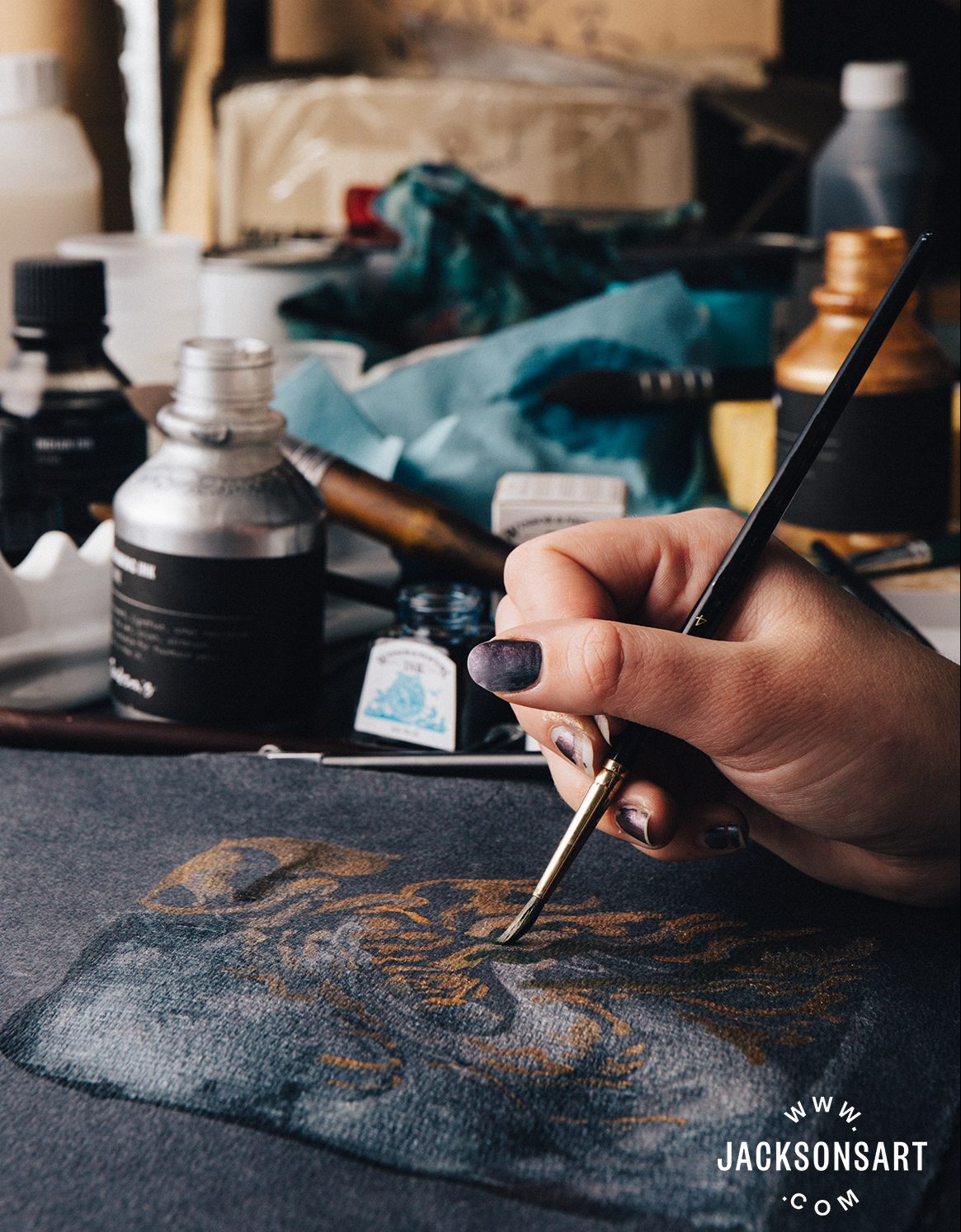 Things to Consider When Buying a Metallic Ink

There are a few things you want to consider before buying a metallic ink – firstly, how does it handle in washes and work with other wet and dry products? Secondly, how opaque is the ink when used and can you adjust this opacity? Thirdly, does it dry to a gloss or matt finish and once dry does the mica pigment sink into the paper leaving a much duller final effect?

As our metallic inks may be of interest to artists who want to produce fine lines and use dip pens or ruling pens, we looked at the consistency of the ink – how it carries and any adjustments that can be made. 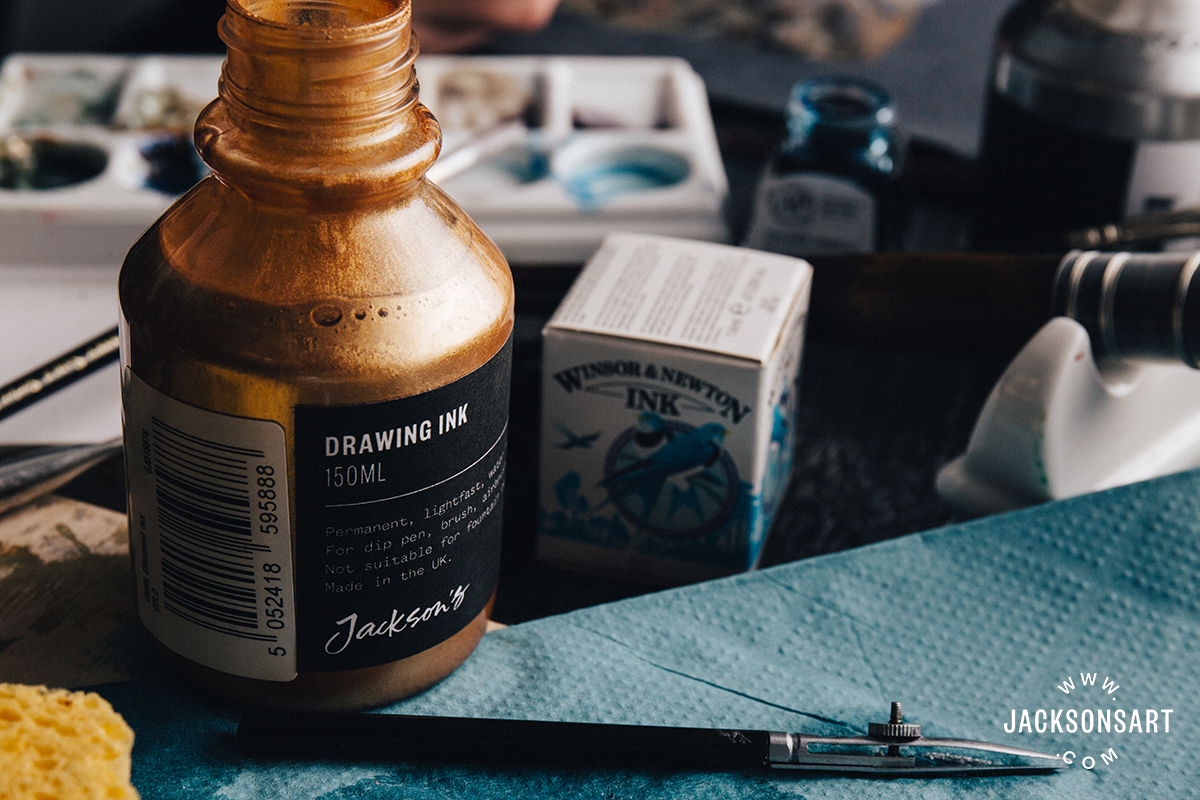 All Jackson’s brand Drawing Inks are made with shellac and purified water, pigmented with dye and can be diluted with water to create subtle tones and washes. This is a real bonus when it comes to metallic colours which can often be hard to combine into your normal practice. Our metallic inks are completely permanent, waterproof once dry and have an excellent lightfastness.

How Metallic Ink Behaves with Dry and Wet Washes 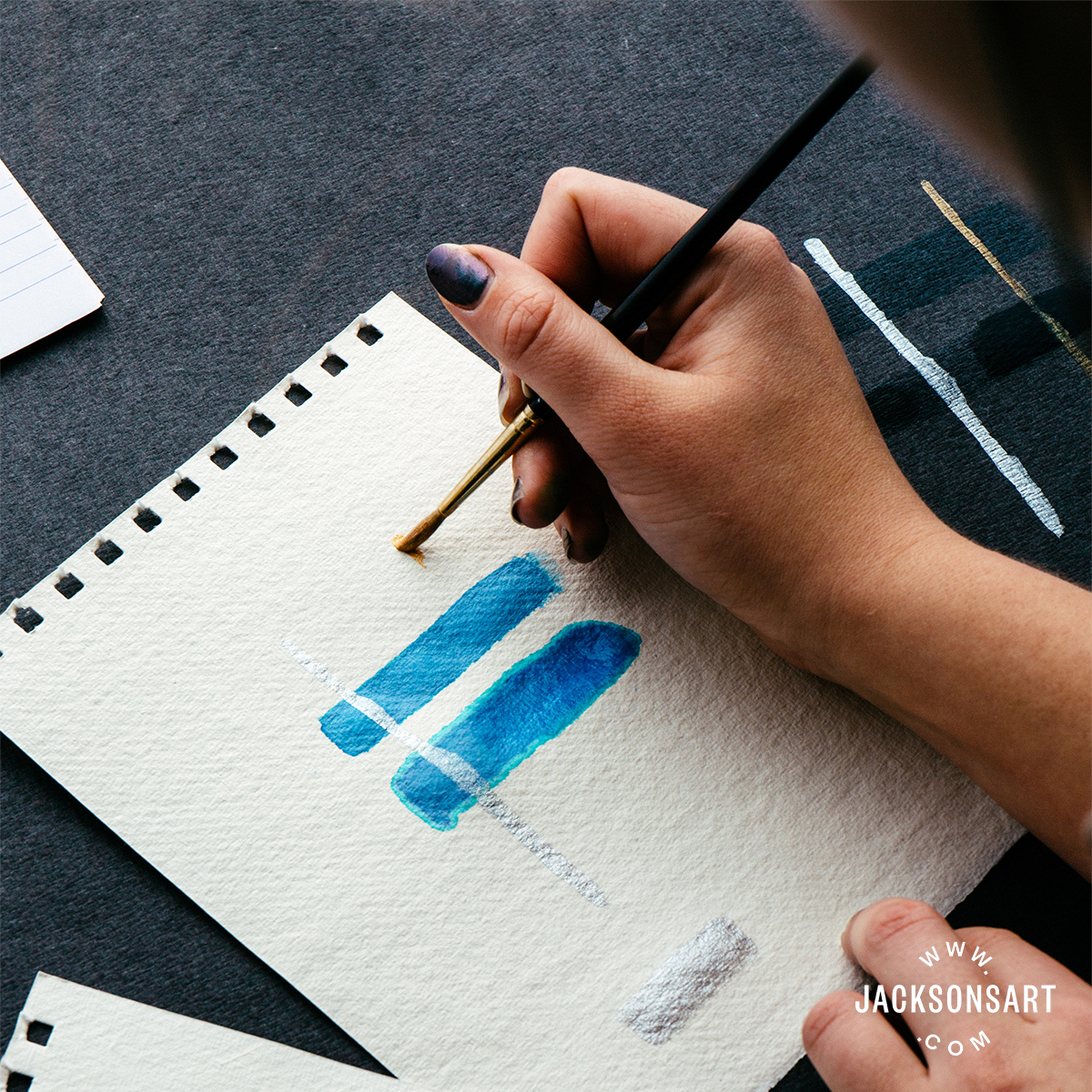 Jackson’s Silver Drawing Ink over Winsor and Newton Blue Drawing Ink: dried wash at the top followed by a wet wash below

I began by testing how the ink dealt with going over a dried ink wash (Winsor and Newton Blue Drawing Ink) and a wet ink wash. While it covered the dried ink nicely and with a fair opacity, there was slight bleeding and dispersal of pigment when it went through the wet wash – this of course could be of use if you wanted to combine the two products wet-in-wet although the bleed wasn’t very even. 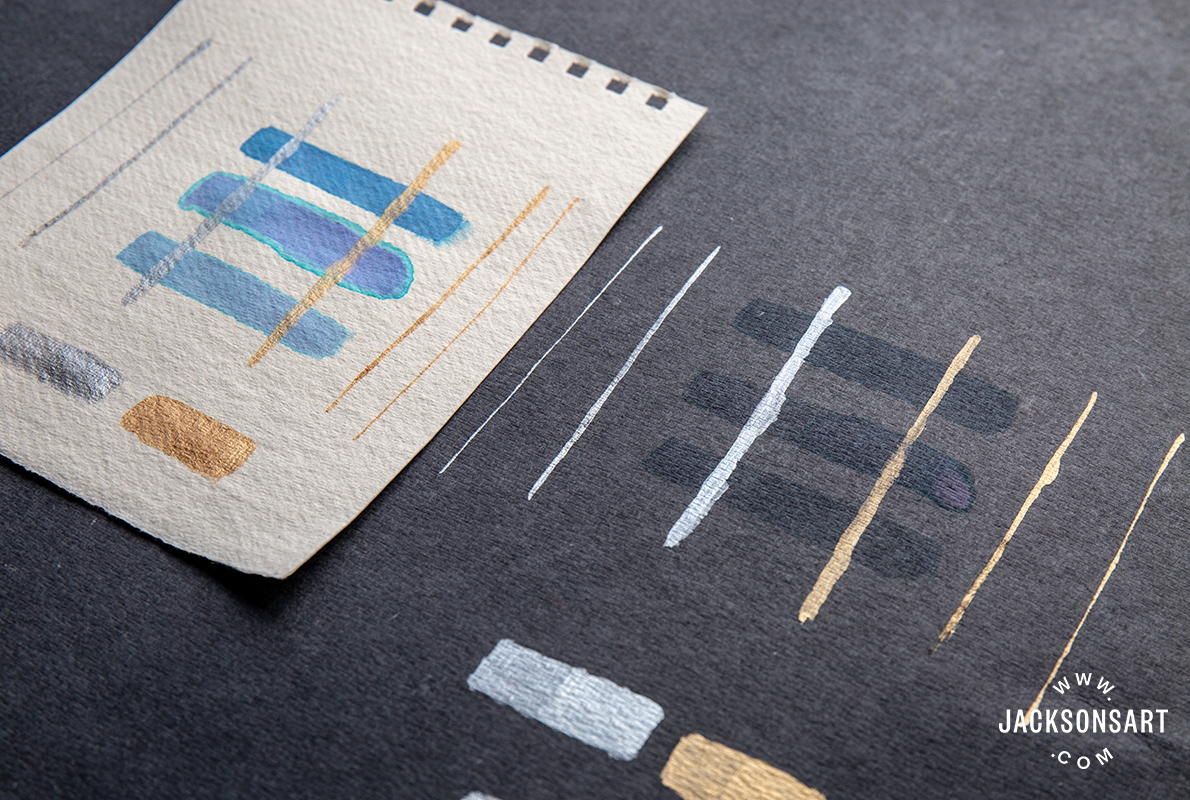 I went through the same process with Jackson’s Gold Drawing Ink and found the same effect. After both had dried, I then did a wash of blue ink to see whether the ink was water resistant and whether it would repel the wash. Neither of the dried metallic inks were affected by the wash over them and both almost completely repelled the coloured ink leaving their brightness to shine through. 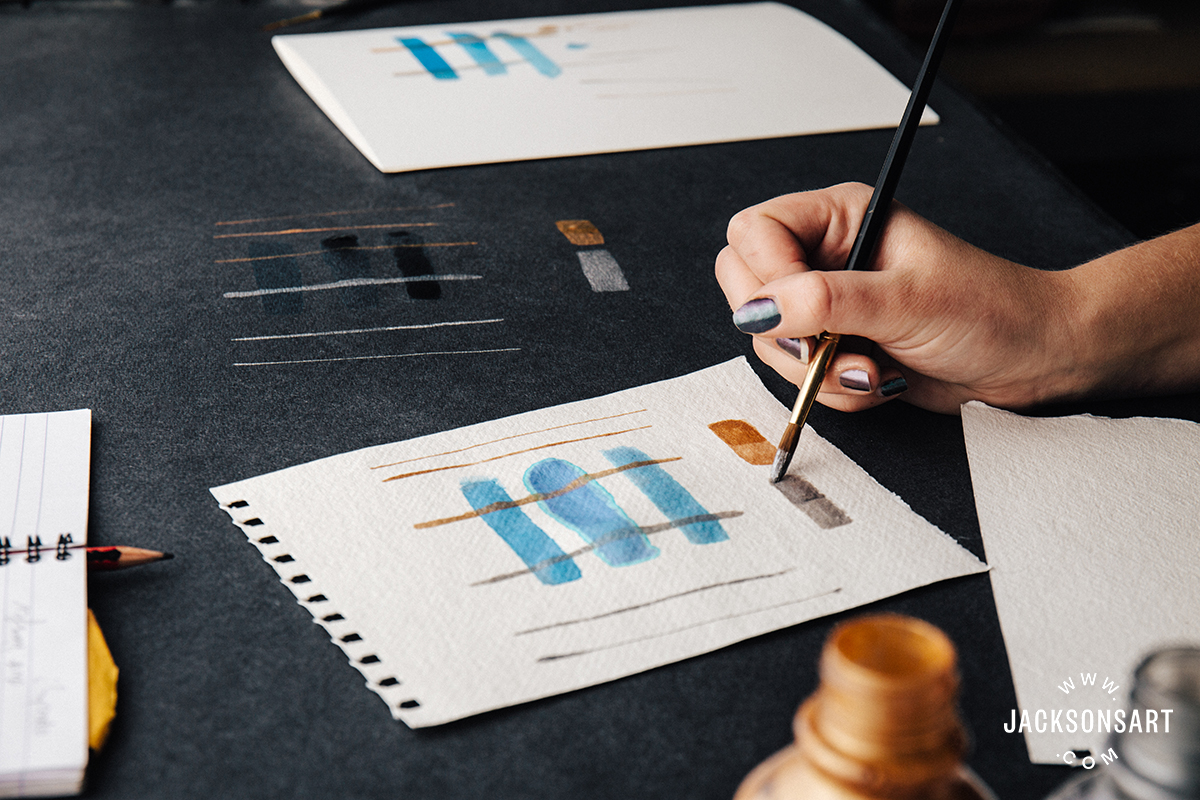 Improving the opacity of metallic ink by applying a second layer

I found these metallic inks surprisingly opaque, this was particularly noticeable on the Black Khadi paper where they stood out strongly. It is worth noting that there was still some sinking of pigment into the paper so if you wanted a stronger effect it is worth going over the same areas with a second layer of paint. 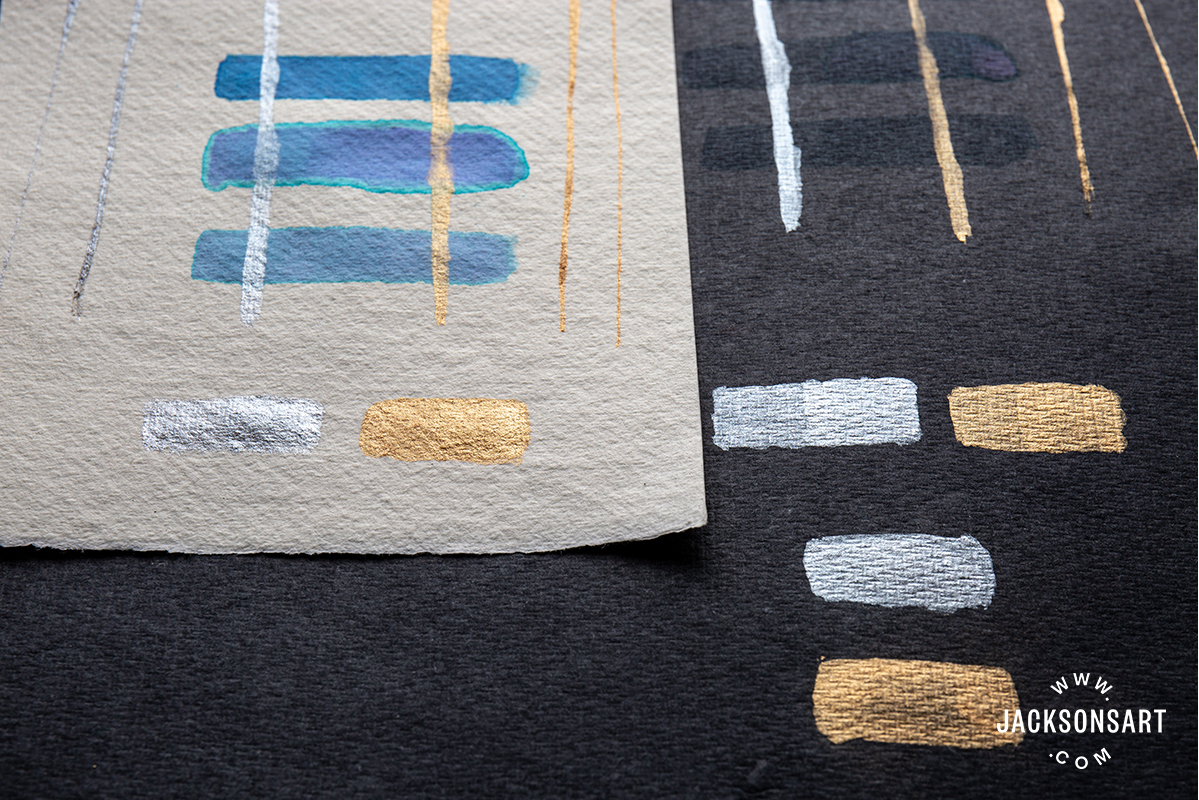 The two horizontal rectangles on the white paper and the black paper all have only one layer of ink on the left hand side and two layers of ink on the right hand side. This demonstrates the difference in opacity an extra layer of paint can make.

Since Jackson’s Metallic Ink is made with shellac and is evenly pigmented it is also easy to dilute the ink with water to create semi-opaque subtle washes that allow under layers to show through.

Level of Reflectivity When Wet and Dry and Achieving Tonal Values 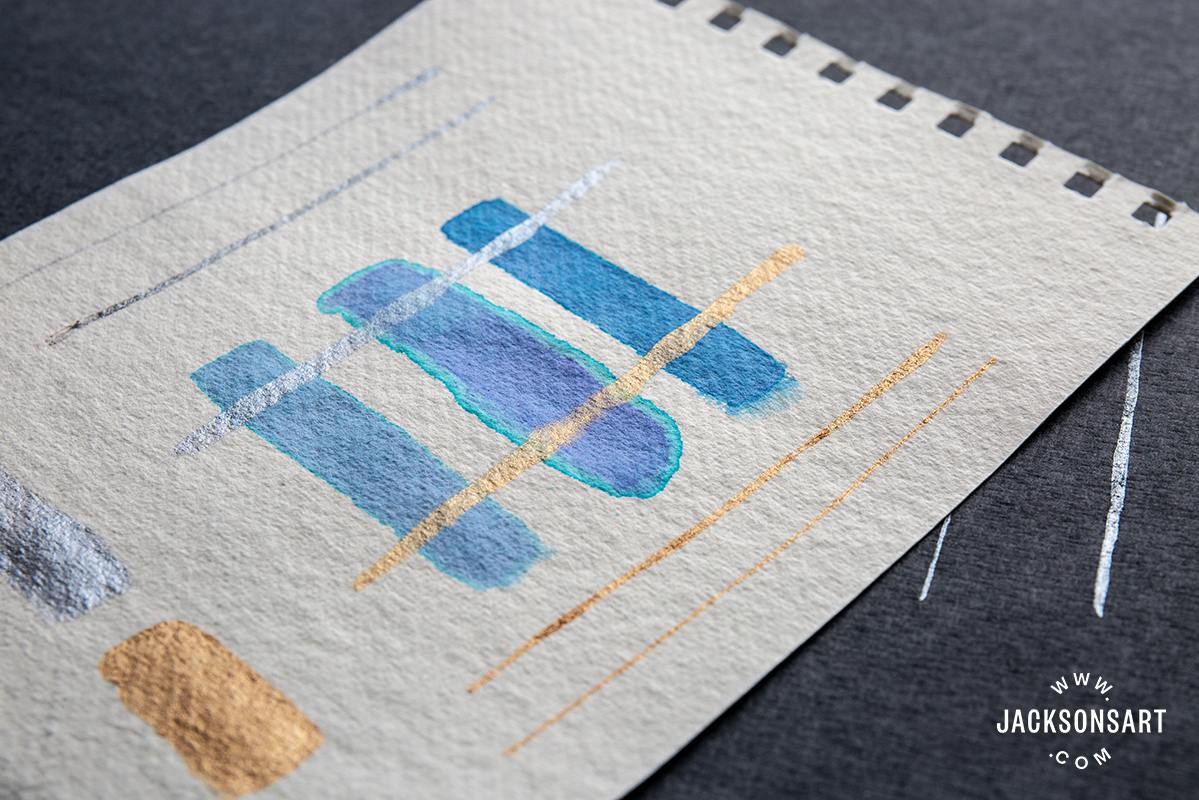 Dried tests of Gold and Silver on Black and White Khadi Paper demonstrating their satin finish.

Often when you use a metallic product, it can throw off your tonal values by either having such a high gloss that you can’t see it’s actual colour and alter the whole work or by drying duller than you expected as the heavy mica pigment can sometimes sink into the paper as it dries.

I found that the metallic inks shine didn’t change much as it dried. If anything it was slightly shinier than I expected, and that the shine, while obvious, wasn’t overpowering and enabled tonal values to still be achieved. 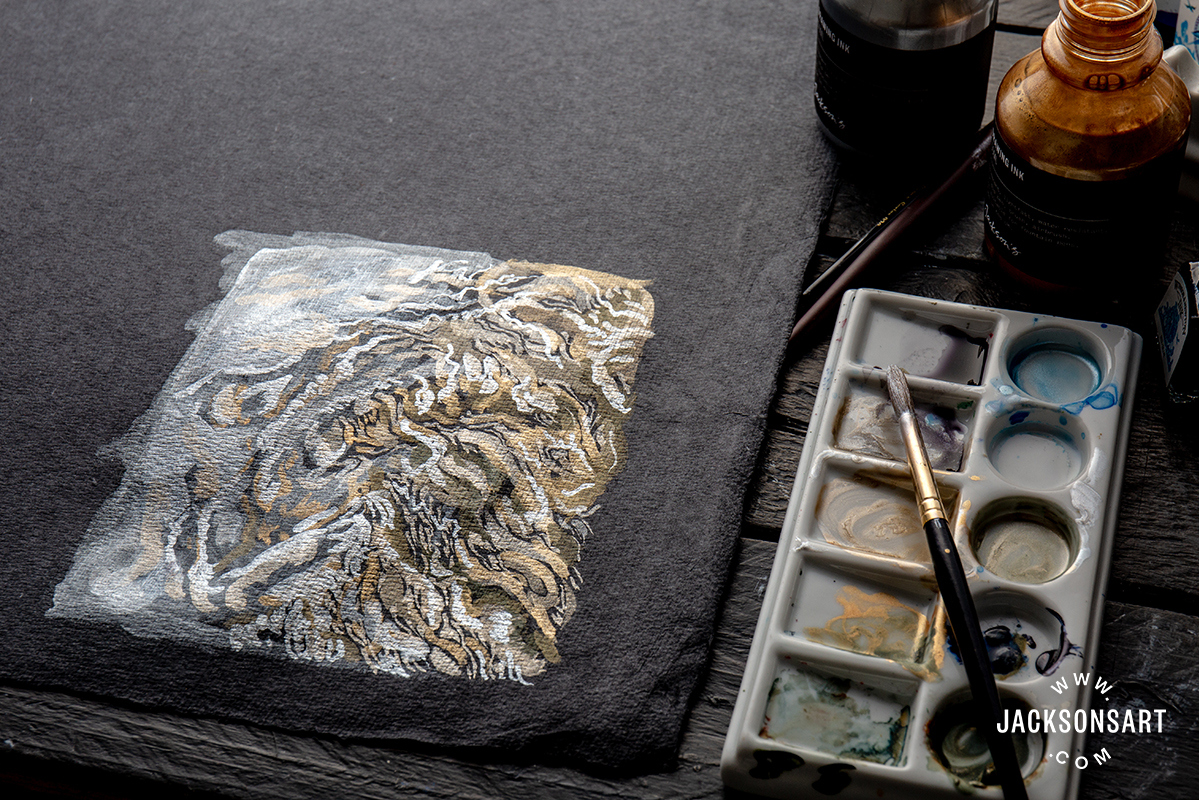 Tests combining the Silver and Gold Ink with each other, different quantities of water and Winsor and Newton Blue Ink

I found by diluting the ink with water and by mixing the gold and silver together and with coloured ink I could achieve different levels of reflectiveness and that this helped distinguish different values. 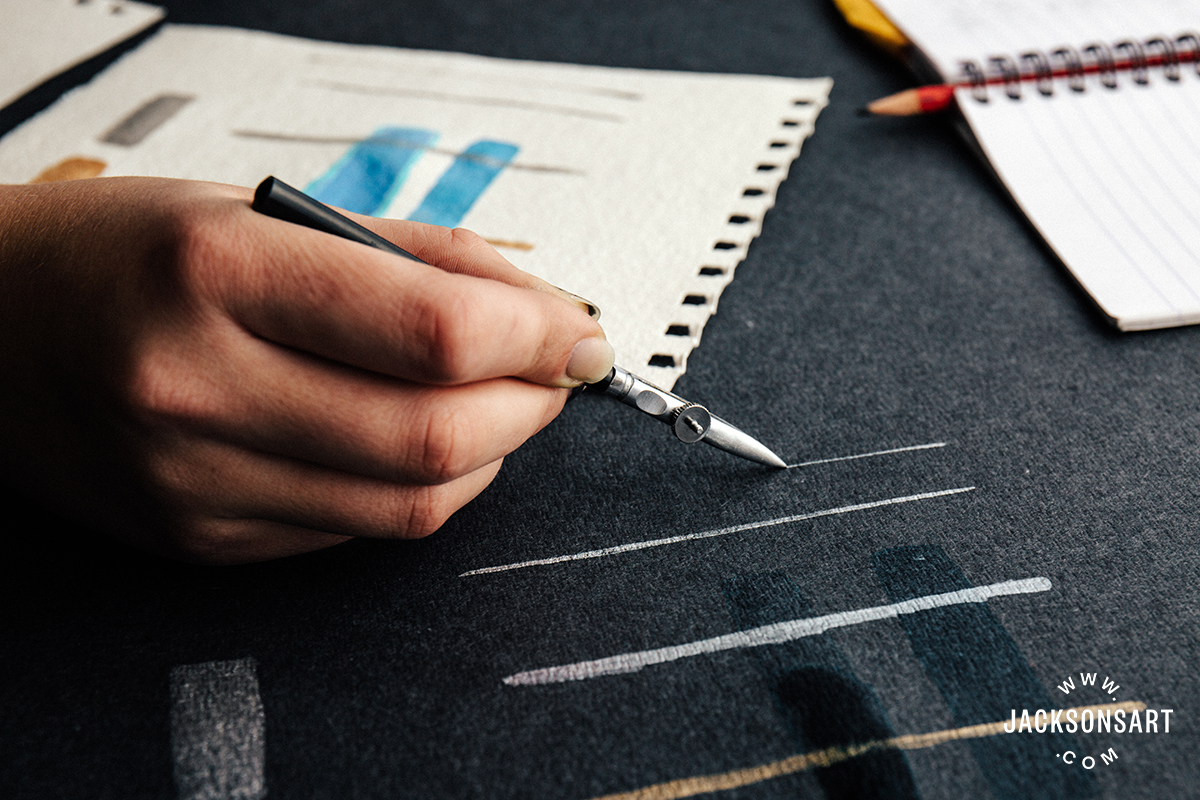 I found the consistency of both the Gold and Silver Inks perfect for using with a ruling pen. It was easy to create even, consistent lines without having to top up the ink on the pen too much. 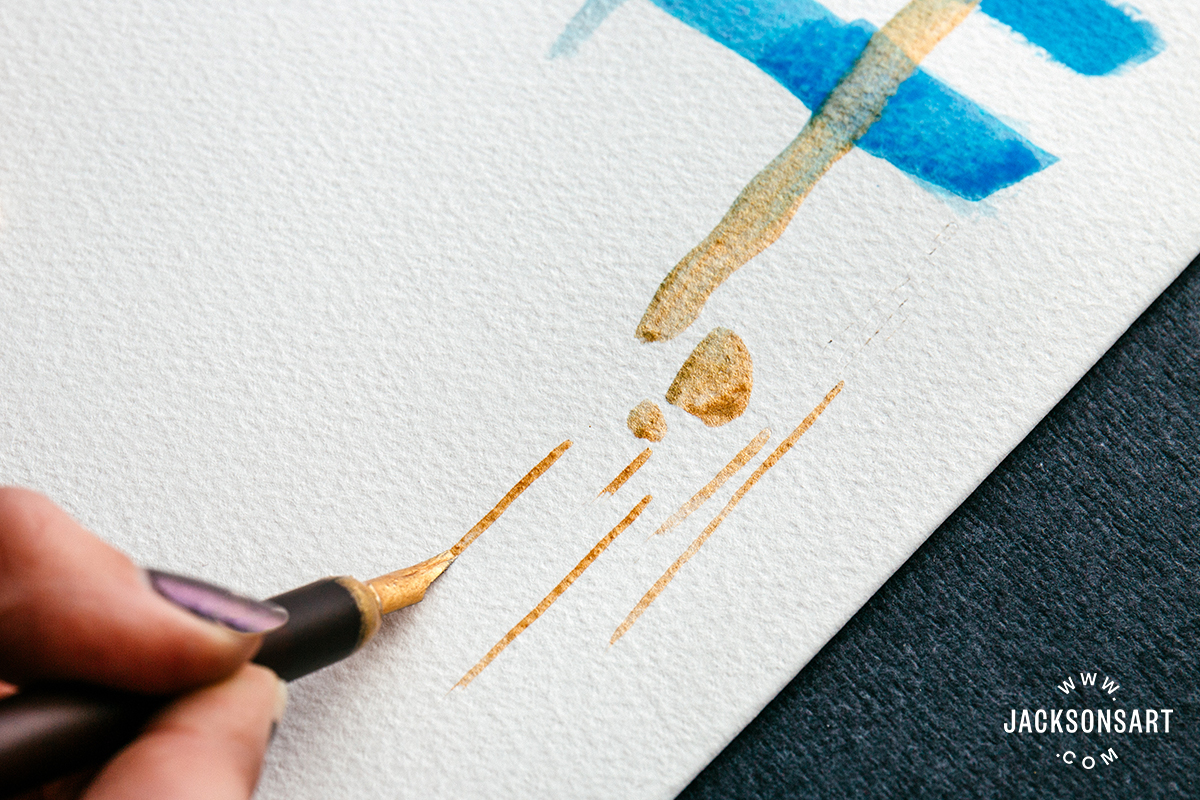 When I tried using the inks with a dip pen I found the consistency was slightly too thick and that it didn’t flow that well and the lines were inconsistent. The nib I chose was a medium-fine drawing nib for quite delicate work so I wasn’t shocked that the test wasn’t entirely successful. I then diluted the gold ink slightly with water and found that it flowed far better and produced a fairly consistently coloured line.

Many metallic products are made with mica pigment but insufficient binders can mean that the pigment can be smudged or there can be a powder residue once dried. Even with a lot of scrubbing Jackson’s Metallic Inks didn’t produce any residue or smudge.

Mica dust transfer can be messy and at worst ruin a piece, luckily my test didn’t show any dust

You will need to gently shake the bottles of ink before use to make sure the pigment is evenly dispersed. 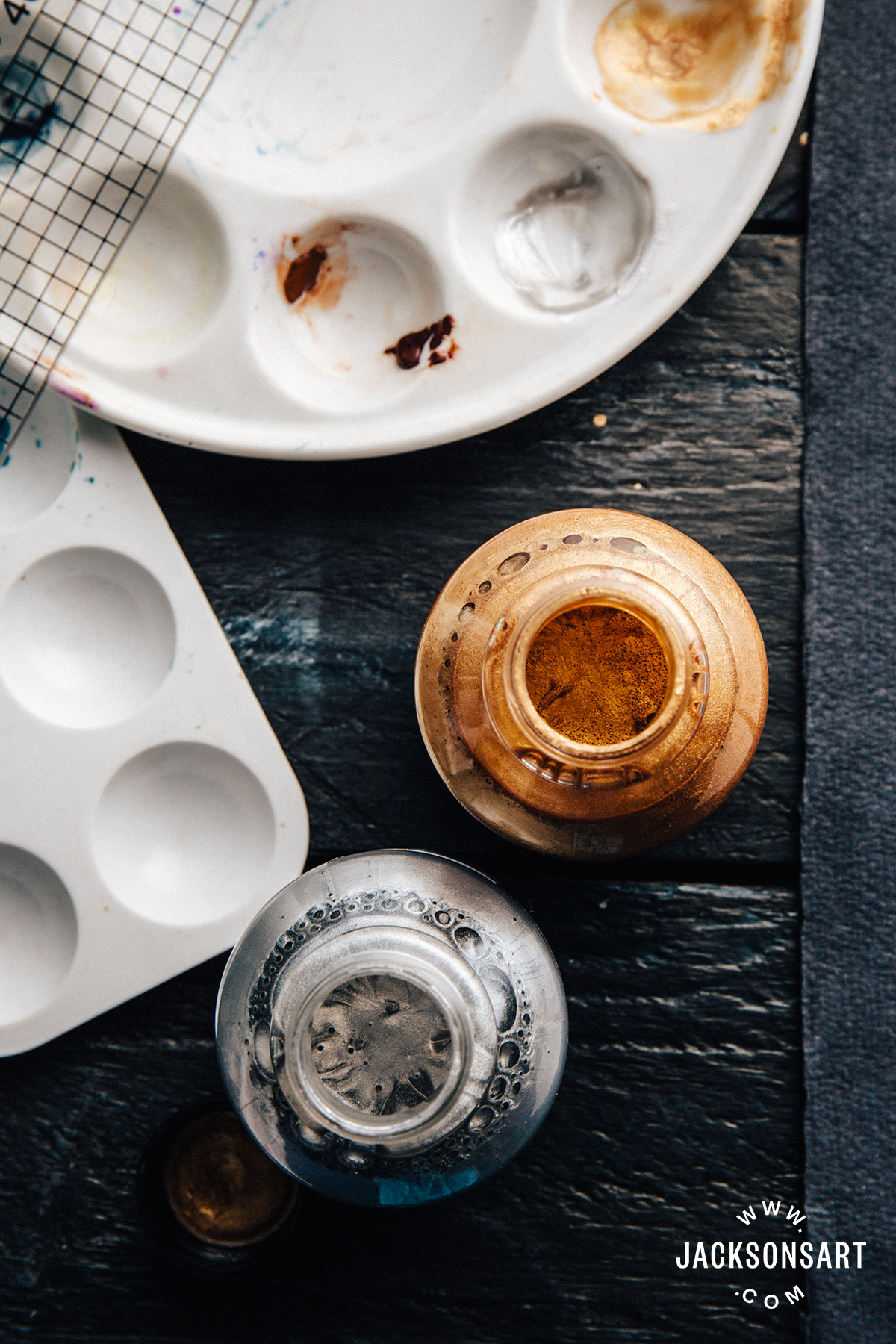 View our Jackson’s Gold and Silver Drawing Inks, along with our whole range of Drawing Inks, the ruling pen and the dip pen holder and nib that were used in these tests by clicking on each underlined product.

If you’d like to try out Khadi Black Handmade Rag Paper you can find it here, along with the whole range of Khadi Papers we supply.