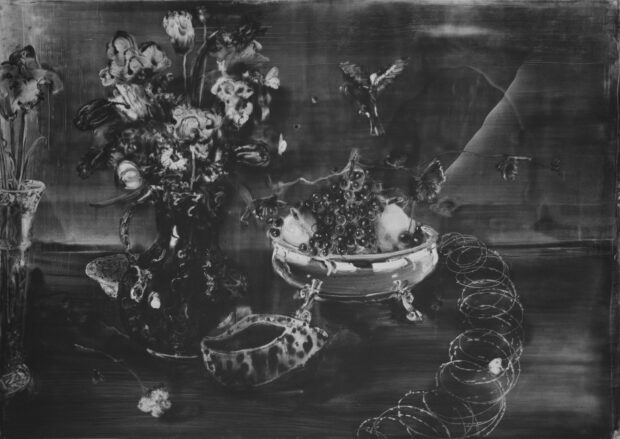 Christopher Cook won the Still life/botanical category prize in the Jackson’s Painting Prize this year with his work, Global Reach. In this painting, opulent objects are excavated to life from a graphite, resin and oil medium, developed by Christopher and unique to his practice. Here, he talks about his mark making tools, the function of monochrome and the tradition of still life painting in a contemporary context. 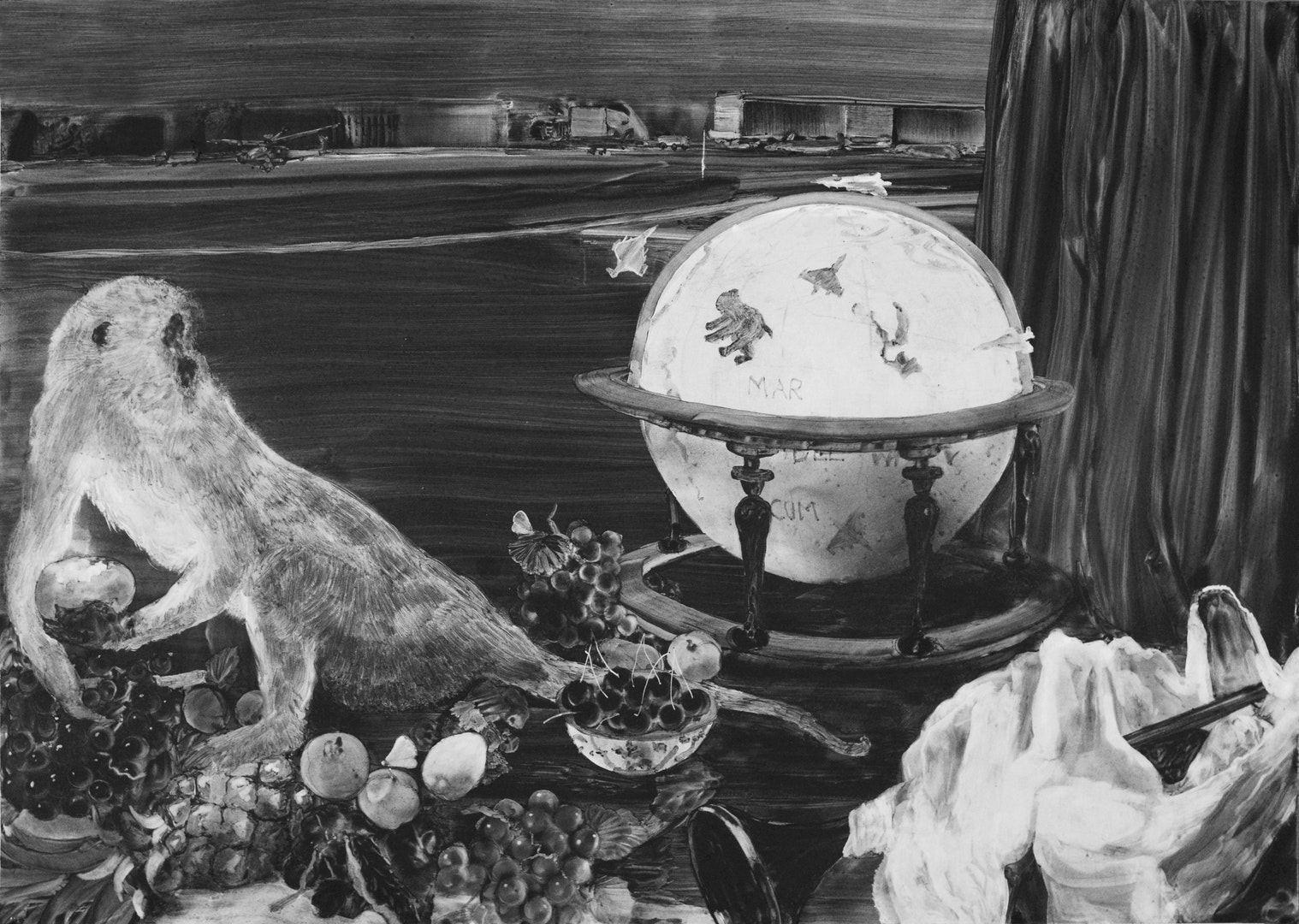 Clare: Can you tell us about your artistic background/education?

Christopher: I did plenty of drawing and painting as a child – there was always an easel in my bedroom – so I must have made my mind up fairly early. At university I took a combined degree in English Literature and Fine Art, and this confirmed that painting was a fundamental activity for me, so I stayed in Devon to paint solidly for a couple of years, then applied to the Royal College of Art, where I did an MA in the mid 80’s. Immediately after that I received an Italian Government award to live and work for two years in Italy, which was a strong formative experience. 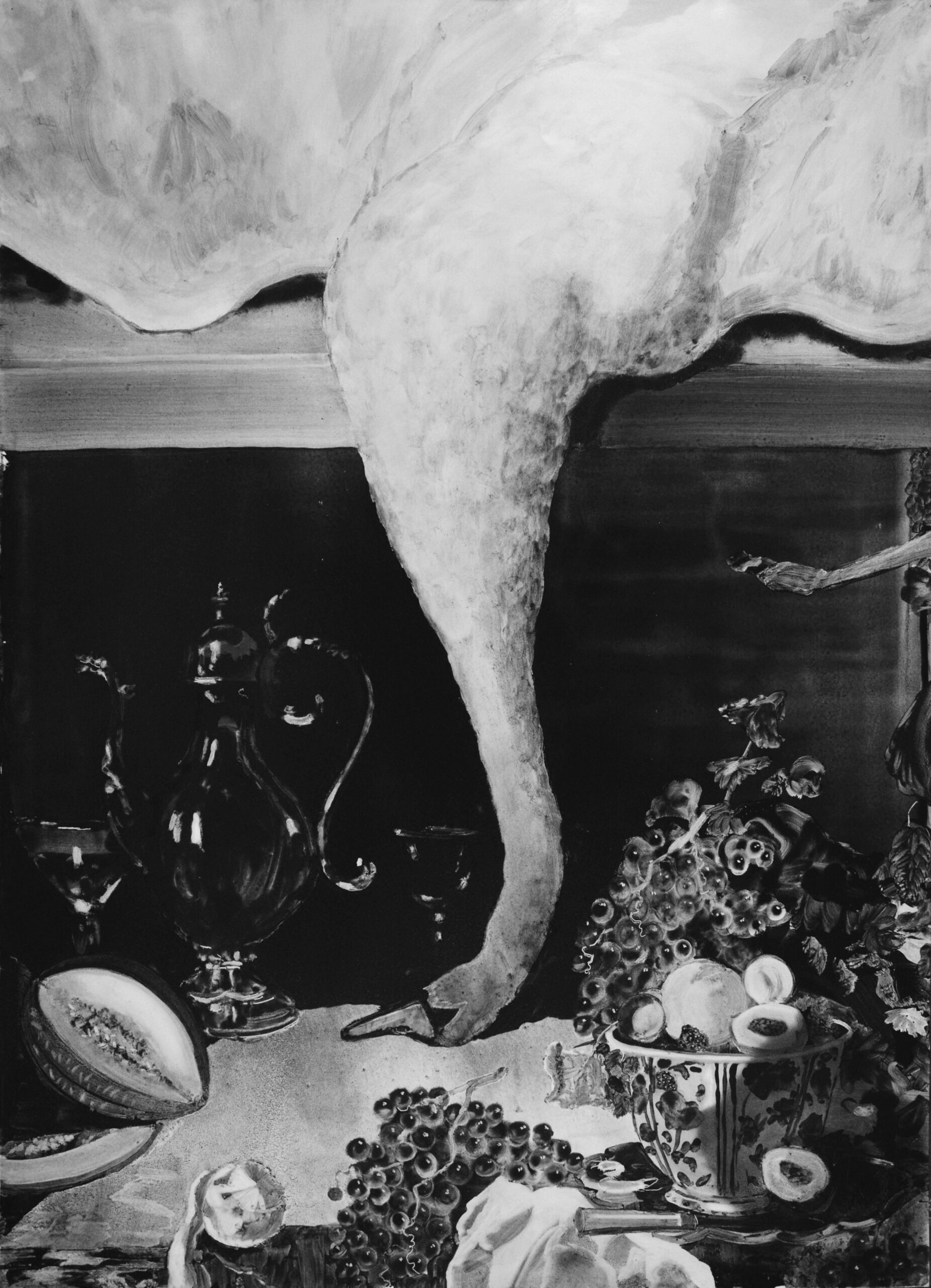 Clare: Where does a painting begin for you? Can you take us through your process?

Christopher: I see painting more as a means of inquiry and discovery than a vehicle for self-expression. An image will often begin in an open manner that allows for plenty of change and evolution to occur. In discovering what works for the image something is learnt about the physical world, or about the internal world of the self. The precise process will depend on what has been developing in the studio – there are very speculative, amorphous sessions which are all about seeing what is possible, then at other times the work can become quite focused around an idea, and also become quite detailed. 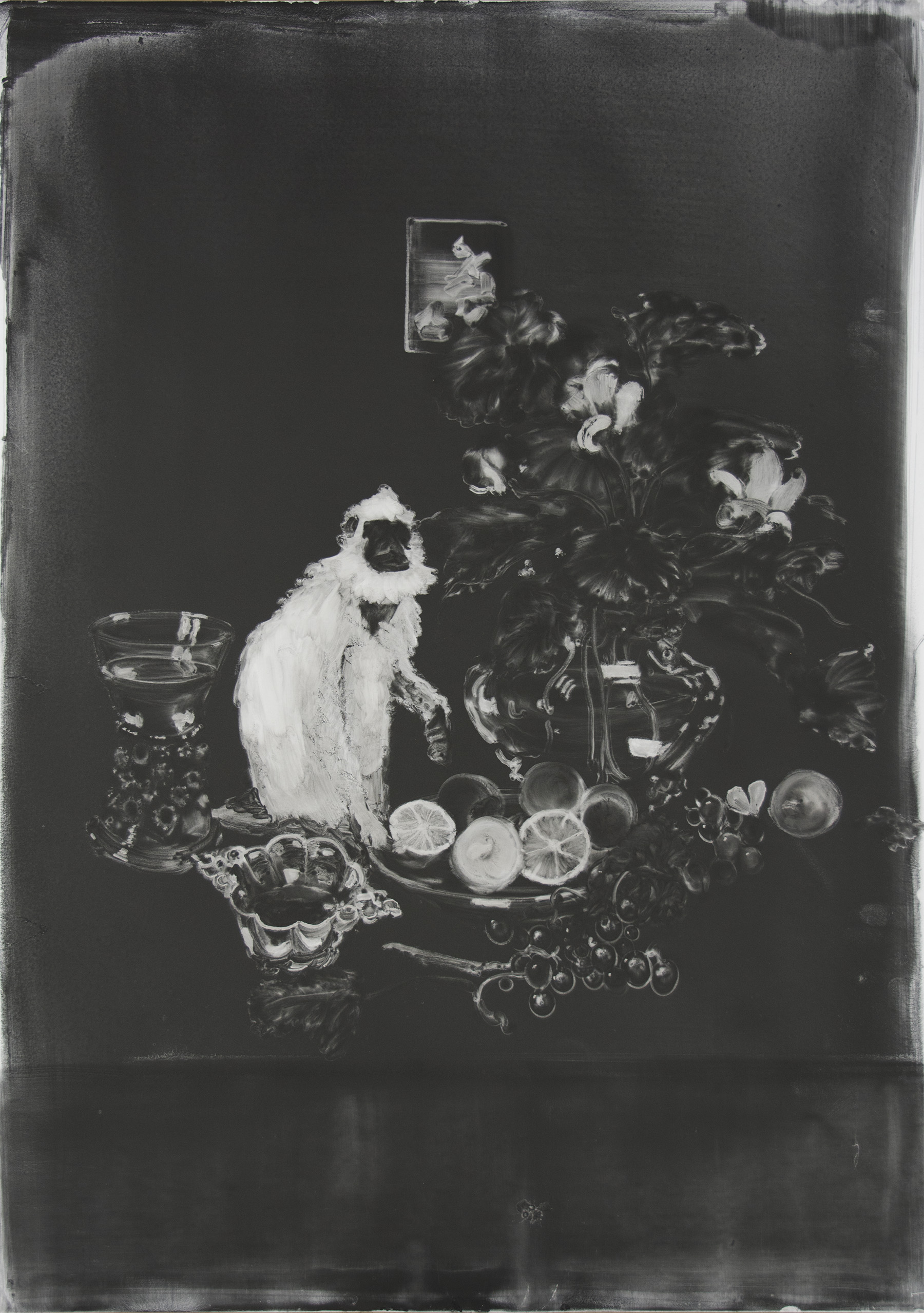 Clare: Can you tell us about how you developed the graphite powder combined with resin paint medium?

Christopher: The use of graphite powder relates back to two sequences of sand drawings I made on the banks of the Ganges river in India in the mid 90s. They were the only creative things that made sense in that extraordinary context, so on returning to the UK I wanted to retain some of their intimacy, direct gesture and granular quality. There then occurred a series of experiments that led me to my current process, which essentially involved adapting graphite powder to a very liquid, reversible, oil painting method. Once I’d achieved that, it completely removed my need for colour, and I’ve now used broadly the same approach for two decades. 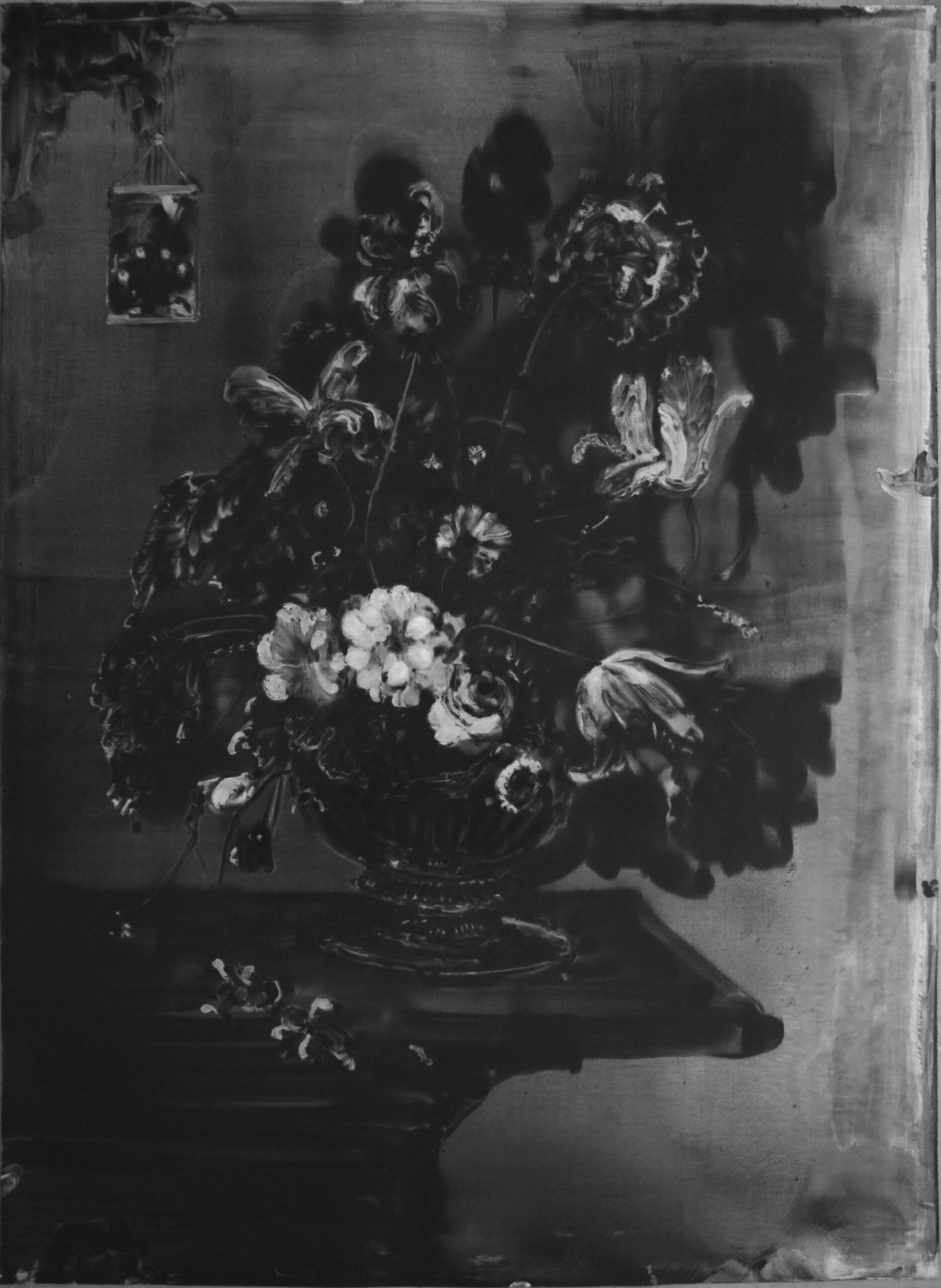 Clare: How do these materials inform the subject matter of your work?

Christopher: That is a far-reaching question. One reason the process has been compelling is the way in which new subjects and ideas have emerged from being alert to the way the liquid graphite behaves or performs. There are maybe three main factors in this behaviour. The first is monochrome. Having to recognise an emergent idea tonally removed colour-associations that previously would tend to lead my imagination in habitual directions. Using monochrome delays that moment when an idea consolidates, allowing more contemplation, more potential, formal and narrative, to stay in play for longer. Monochrome also provided associations with black and white photography that I make use of from time to time – its shifting focus and apparent documentary quality.

Secondly, the liquid nature of the medium demands I work horizontally – as with the India sand drawings – and this completely changed the way I create space in the images – the need for perspective or a horizon was removed, releasing unfamiliar configurations. The third feature of the medium is its granularity, the way the pigment is deposited on the surfaces when affected by solvents or gravity. An image will usually shift from the very painterly to something more like a drawing when it begins to dry out. The range of mark and gesture that encourages has expanded the range of possibilities significantly. 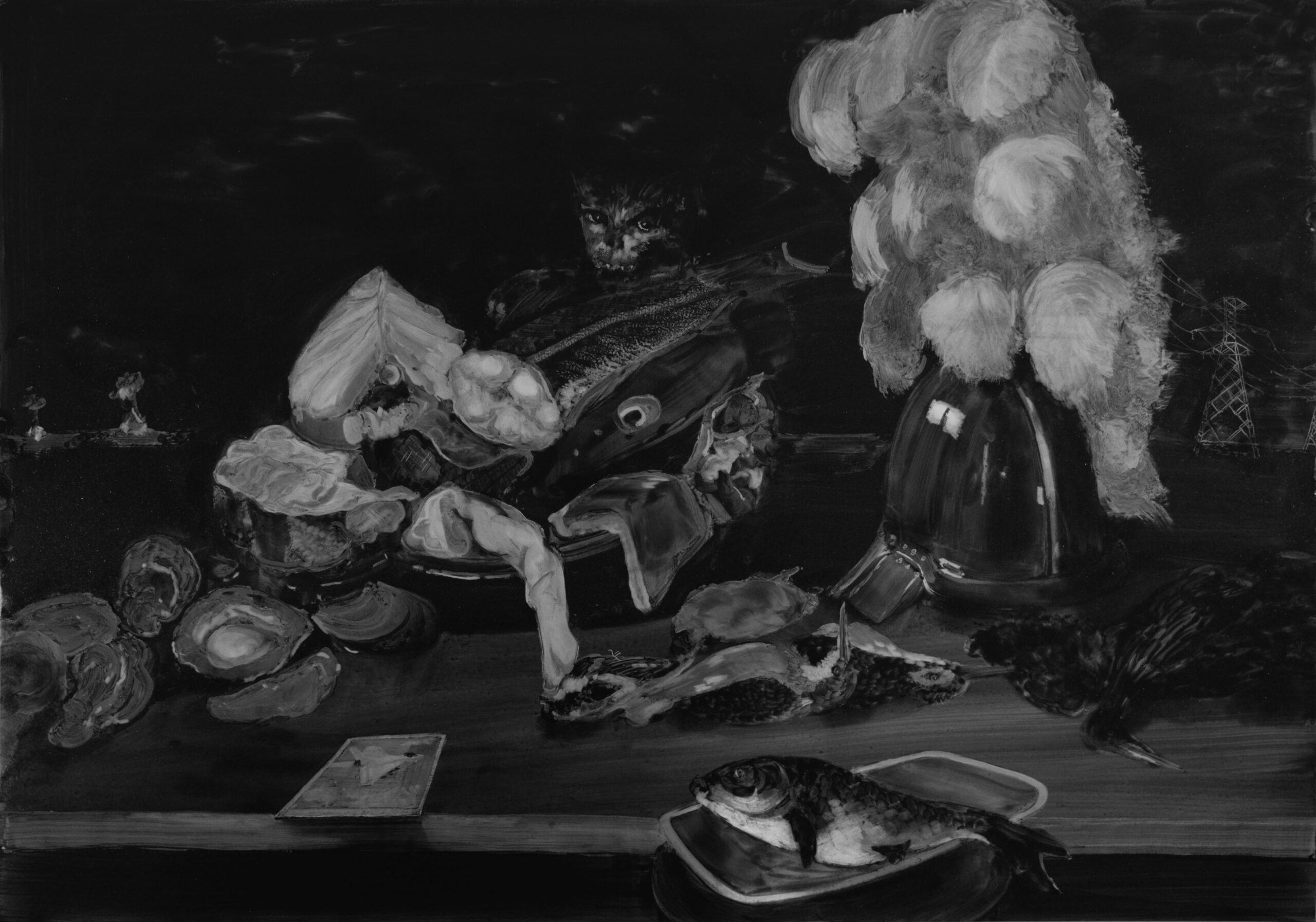 These characteristics of the process are fundamental to the series of works that I’ve concentrated on for the past four years, from which “Global Reach” came. They are based on Dutch 17th century still life and related genres, such as Vanitas or memento mori. Because I work from dark to light, removing rather than adding pigment, I was drawn to the way these genres involve luminous, precious objects set against dark backgrounds. My initial idea was that rendering these sumptuous, colourful tableaux into a more deadpan monochrome would deliver a delicious irony, perhaps allowing me to comment on the aesthetics of consumerism. As the sequence progressed, and I read more into Dutch history of the period, I began to use a painterly collaging of objects, employing shifting scales and perspectives, and eventually introduced contemporary elements. In this way the sequence slowly began to take on metaphorical quality – the dark background, or context, for the bright objects I began to view as one involving colonialism, the exploitation of resources, the emergence of western capitalism, which in our age has led to social and ethnic division, protectionism, migrant crises and so on. 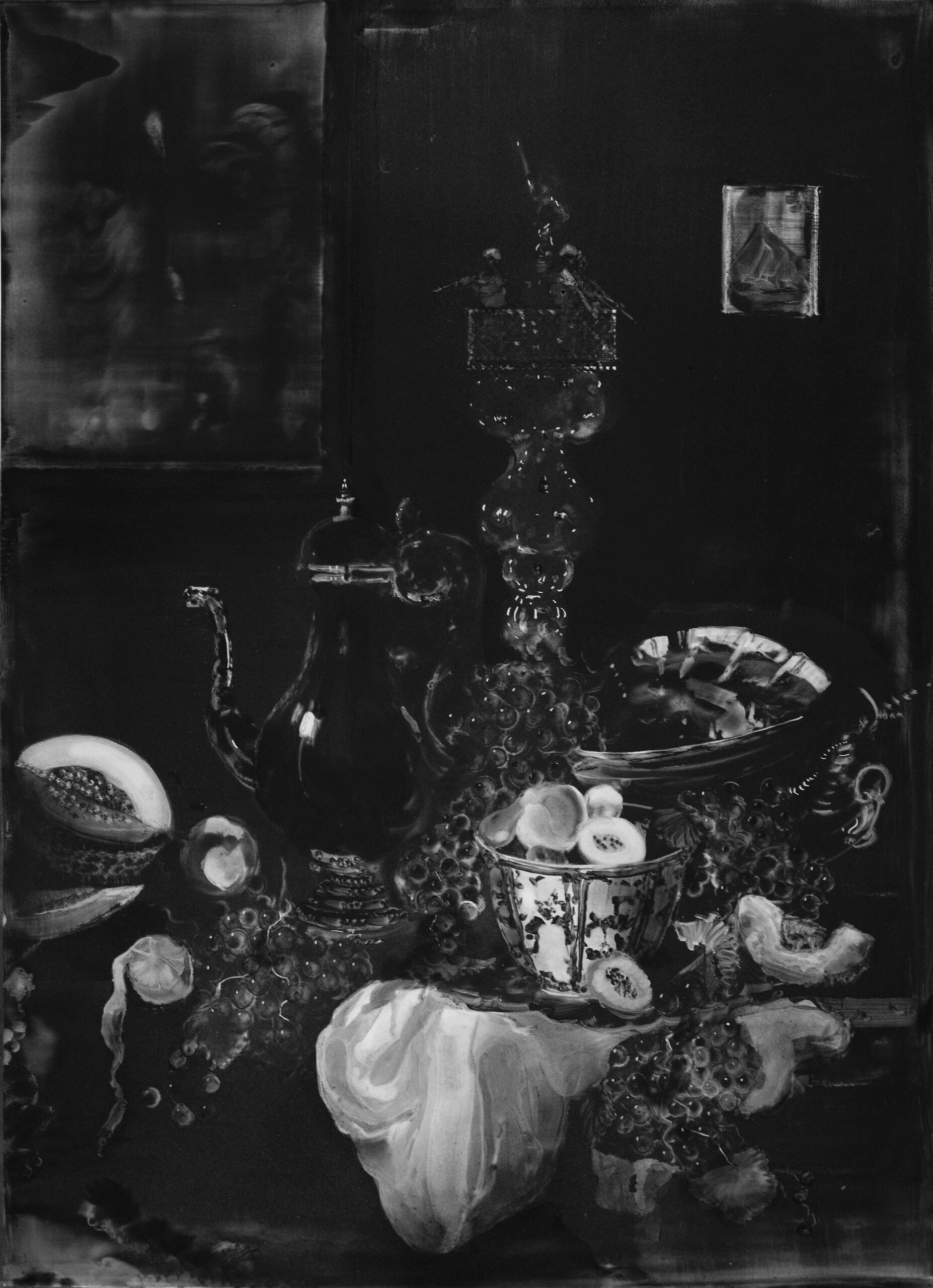 Clare: Do you sketch, draw or plan your works advance?

Christopher: Both the paper and aluminium are surfaces highly resistant to oil which means that when the medium is brushed or poured on, it can be manipulated freely for long periods of time without leaving a permanent mark. This allows for repeated improvised drawings, during which I discover useful forms and spaces. These fluid drawings can then be erased and remade, so that my process often feels as if it is derived from a performance culture: a series of rehearsals leading to an intense couple of days of making the final image. 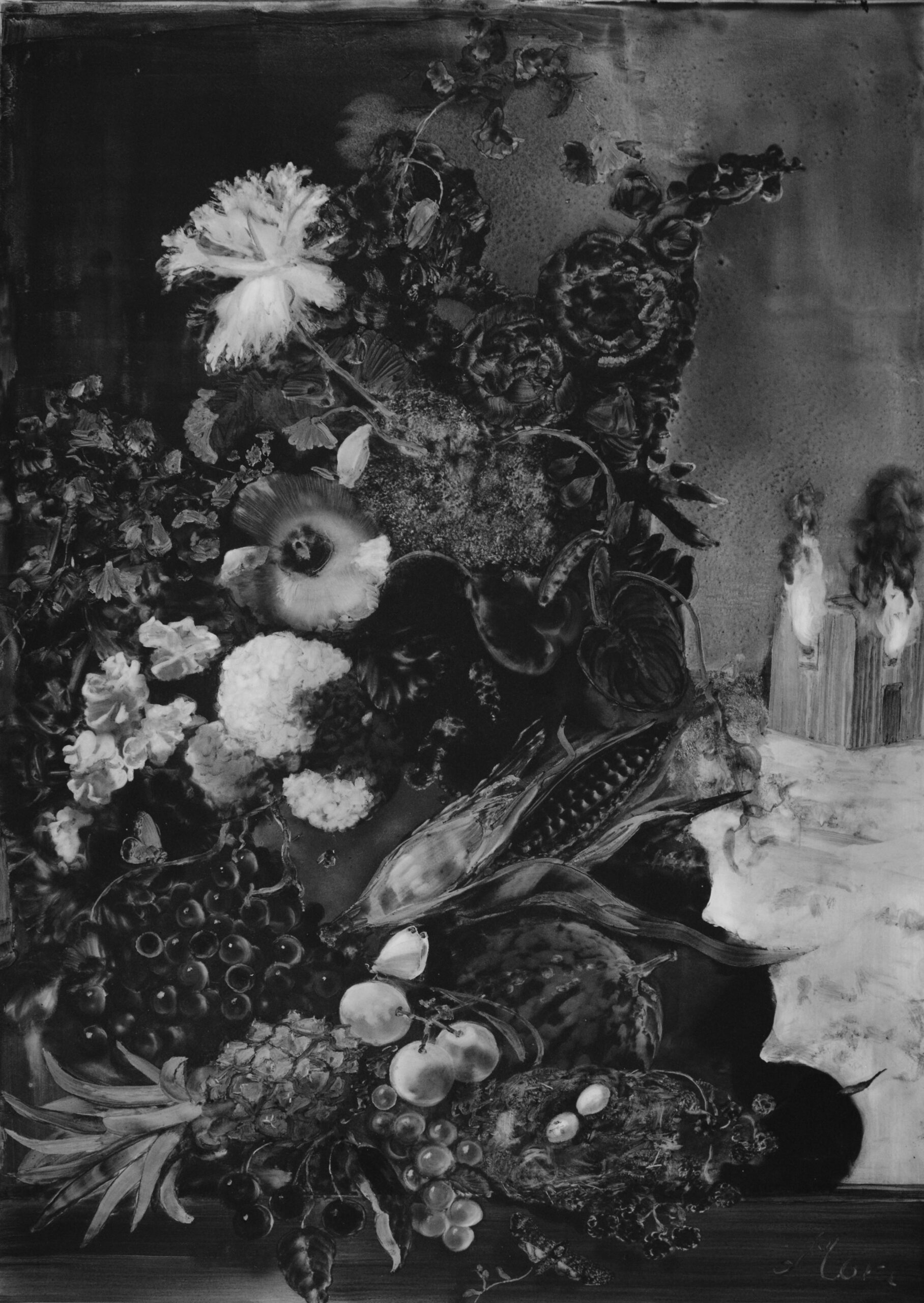 Clare: What are your most important artist’s tools? Do you have any favourites?

Christopher: I use a range of unusual implements as well as conventional brushes. I particularly like using pieces of the same type of paper I am working on, cut into shapes or rolled, and used like soft palette knives. I also have a variety of printmaking tools which work well with the graphite medium. 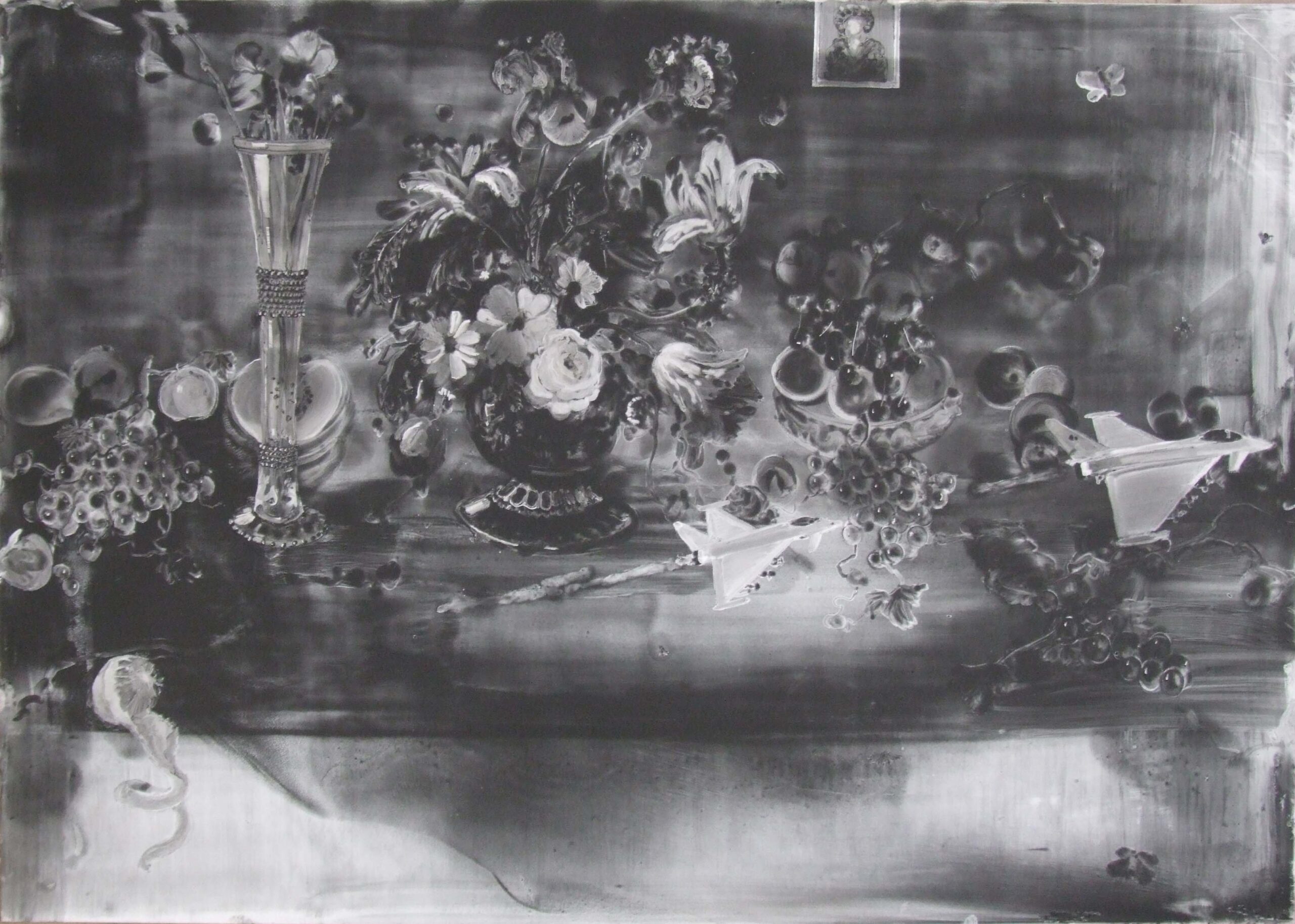 Clare: How has the lockdown of the last few months affected your practice?

Christopher: The first effect of the lockdown was to make working in the studio difficult, because my concentration would wander to thinking of what was happening, and those it was affecting. Studio artists are generally very good in their own company, and can make the most of silence and isolation, so this was unexpected. Gradually the beauty of the English landscape, without people, traffic or amenities, charmed me out of the depression, and I began to make works in the spirit of Samuel Palmer, one of the first artists to inspire me as a young student. 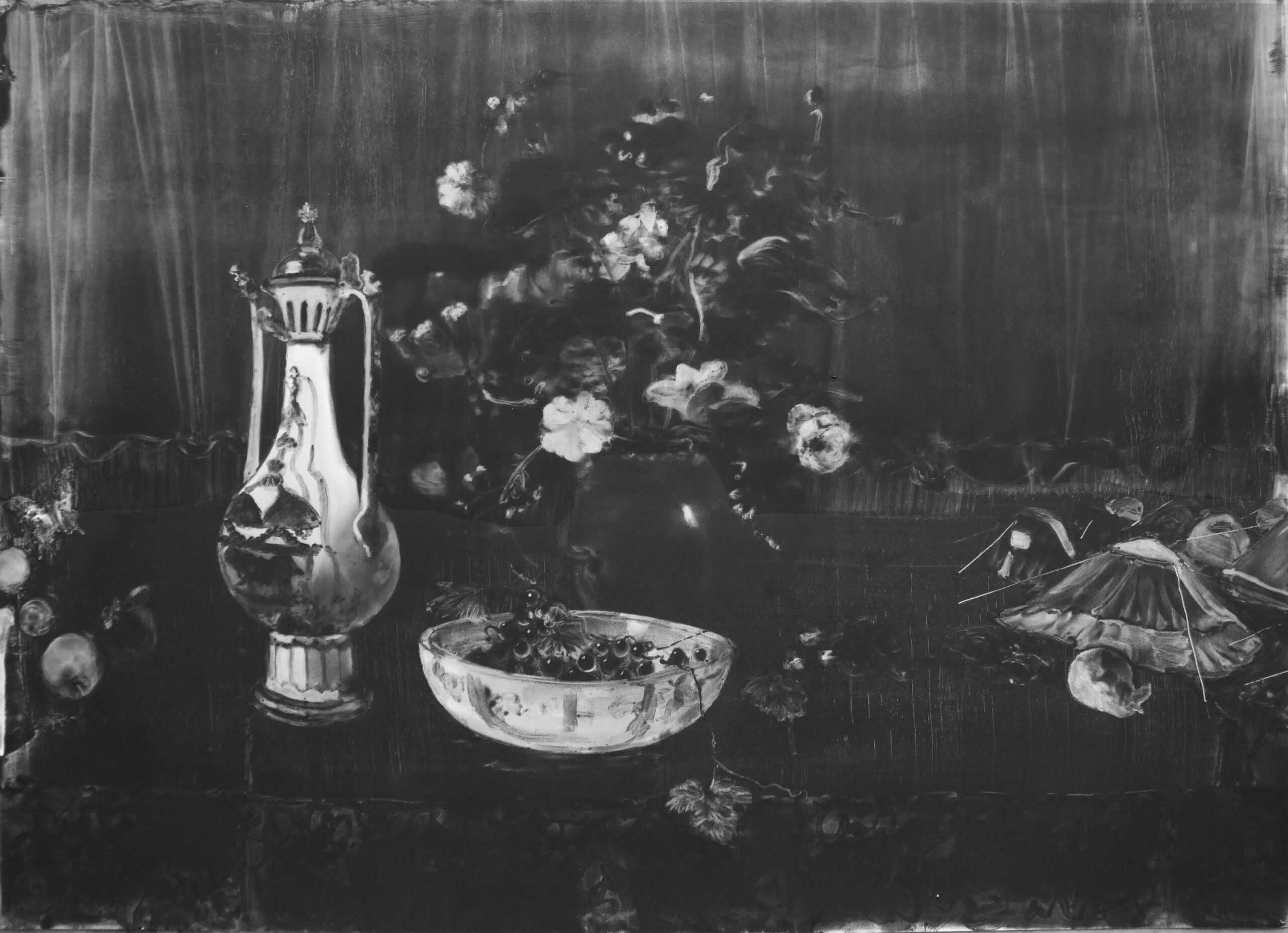 Clare: What are your art influences? Who are your favourite contemporary or historical artists and why?

Christopher: Others in the English landscape tradition that includes Samuel Palmer, particularly William Blake and later, Paul Nash, have always held a special place for me, but Piero della Francesca has to come first. I like experimental Surrealists such as Max Ernst and Paul Klee. In terms of contemporary artists, there are many. Mamma Andersen and Neo Rauch are current favourites. 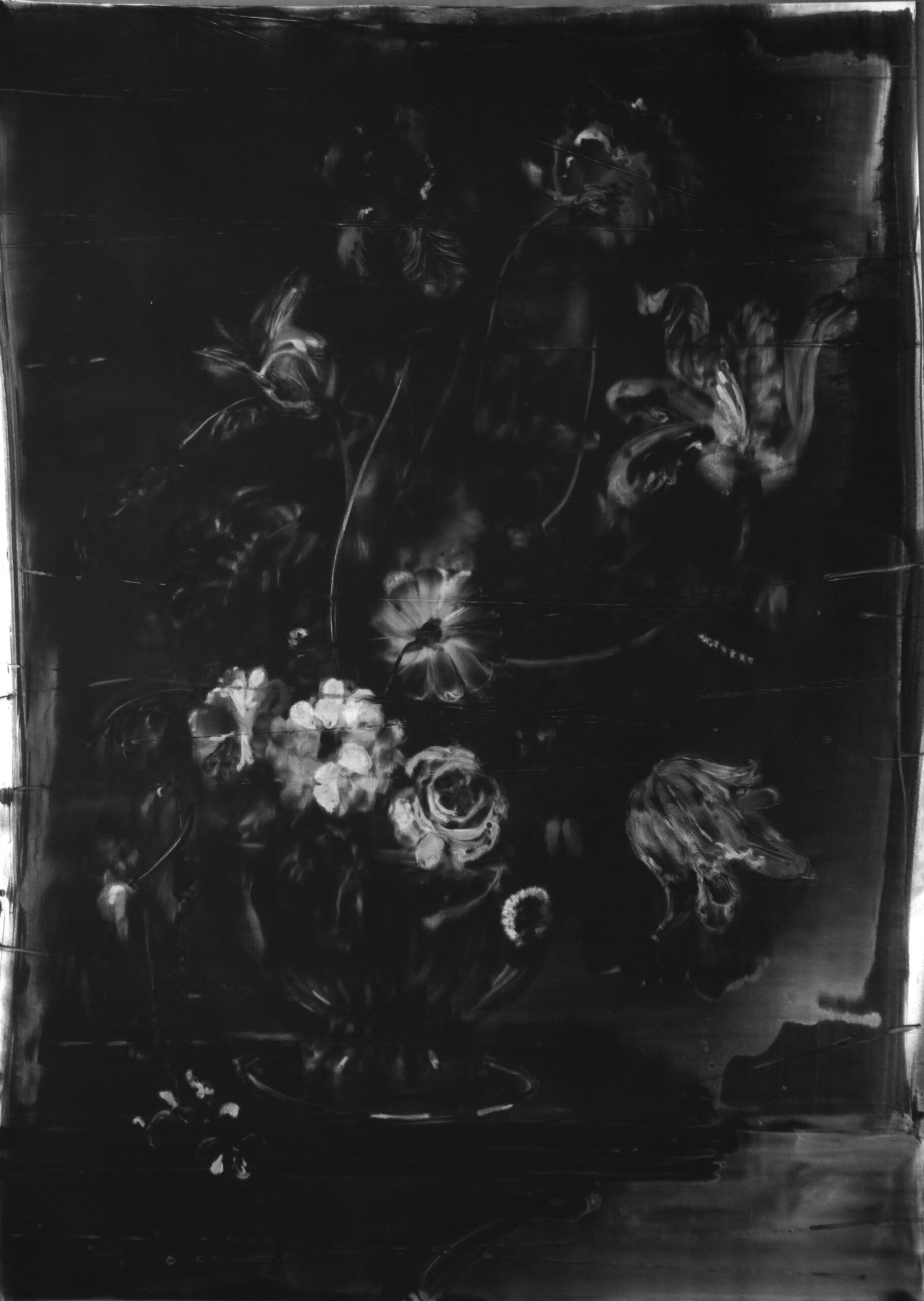 Clare: What makes a good day in the studio for you?

Christopher: Usually when the day has passed quickly – when I find myself working late into the night and don’t realise what time it is. It doesn’t really matter if the image is a success or not, just that the quality of the concentration or absorption has been high. That way you know you are onto something.

Christopher in his studio

Clare: Where else can we see your work online or in the flesh?

I also have a solo show of 13 still life works at Sunny Art Centre, Grays Inn Road, London, from August 17 to September 12. Booking is available on Eventbrite via Sunny Art Centre.

Sign up to our competition newsletter and receive the latest updates about
Jackson’s Painting Prize.

As Blog Editor, Clare contributes regularly with features, reviews and interviews. With a background in fine arts, her practices are illustration, graphic design, video and music.