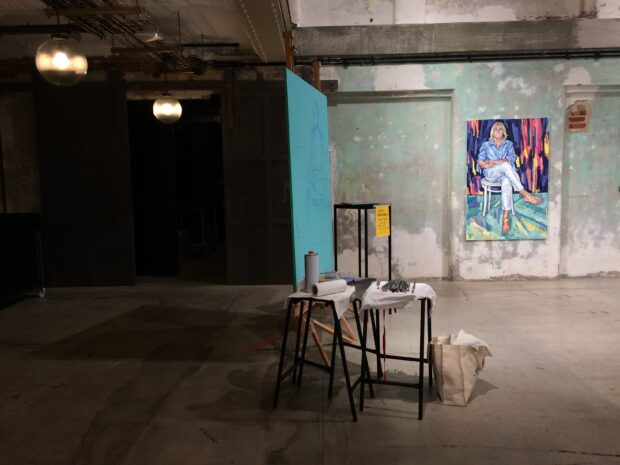 Sarah Jane Moon is a London based figurative painter whose work explores identity, sexuality and gender presentation as well as exploring formal painterly concerns. This year Sarah Jane’s portrait of the New York based photographer Lola Flash was shortlisted for the BP Portrait Award – the second time the artist has been selected for this prestigious exhibition in as many years. The Jackson’s Art Blog asked Sarah to write the story of the portrait of Lola Flash, this was her response. 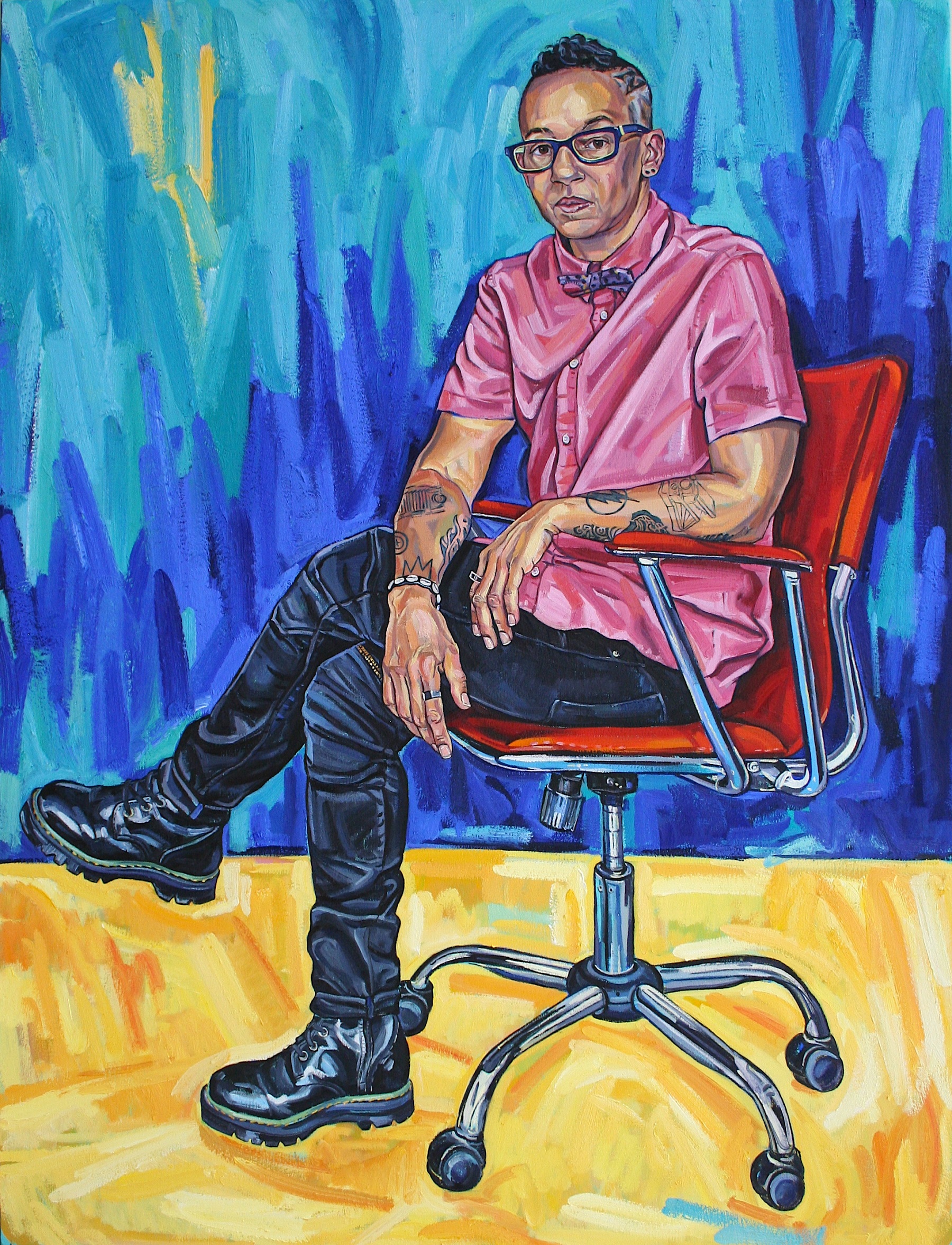 I first met photographer Lola Flash at her exhibition ‘[sur]passing’ at Autograph Gallery in the summer of 2019. I had known of her work prior to the show and we have many friends in common though LGBTQI+ and arts networks. Lola is based in New York and so when she mentioned online that she would not only be in London, but at the gallery, it seemed the perfect opportunity to both see the work in person and meet her too.

Lola’s work is about visibility and pride. She centers black and brown people, women and members of the LGBTQI+ community. I’ve always found her photographs compelling and important but seeing these large photographic portraits en masse in such a beautiful and spacious gallery had a real impact. Something changes when the person portrayed is larger than the viewer and the height at which they were hung gave Lola’s sitters a real presence. I was struck by something in her work that I find hard to describe – perhaps a truth, or honesty or humanity – and sensed that she had achieved something I aim for in my own work. 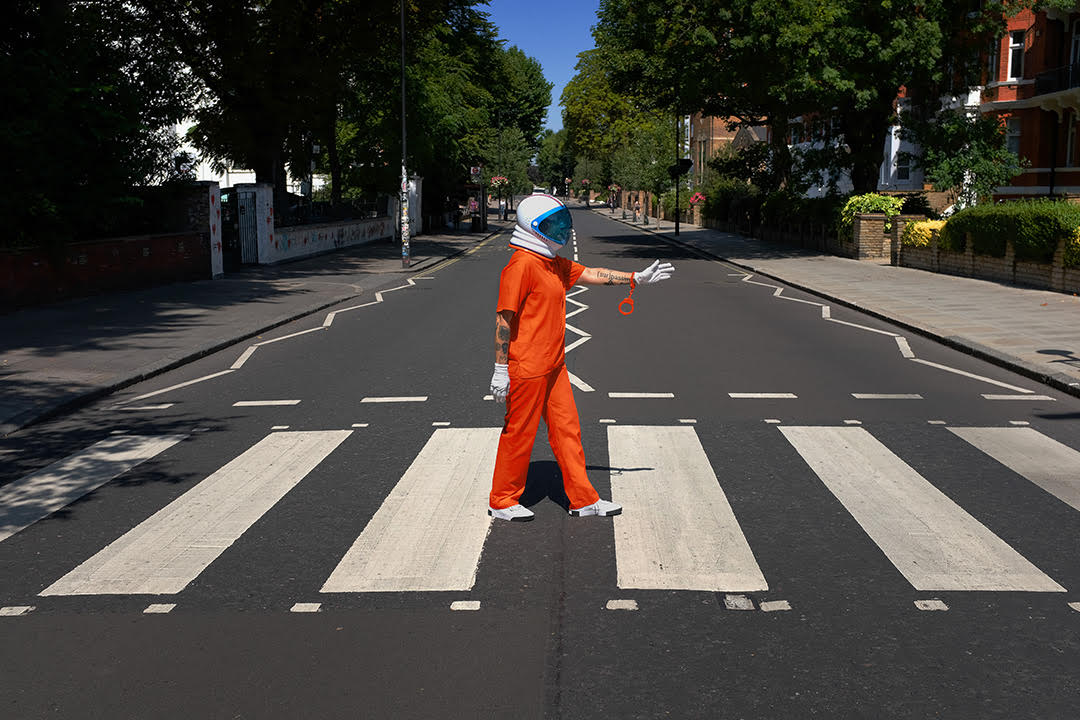 from the Afrofuturism series, photography by Lola Flash (http://www.lolaflash.com/)

Meeting Lola and talking about portraiture across the mediums of painting and photography was insightful and she was so generous with her time. As well as being a photographer, Lola teaches young people and her enthusiasm and patience really came across. I sensed that I was in the presence of someone who had a great deal to share about what it takes to sustain a career in the arts over a number of decades. I felt such resonance with Lola’s work and her ethos that I spontaneously asked if I could paint her portrait.

Once Lola was back in New York, we kept in touch and continued the conversation around the painting. In September of 2019 I happened to be meeting and photographing sitters in New York for two commissions and so arranged to meet with Lola and begin the process of working out the portrait. This is where an image starts for me – when I have the sitter in front of me and I begin to visually work through compositional ideas, colour combinations, props, clothing, attitude. We also talked at length about portraiture and the particularly complex process of making an image of someone, working with their identity. I felt a huge amount of trust from Lola. She also instinctively knew what made a good image in terms of how to position herself and where to put her hands, for example. 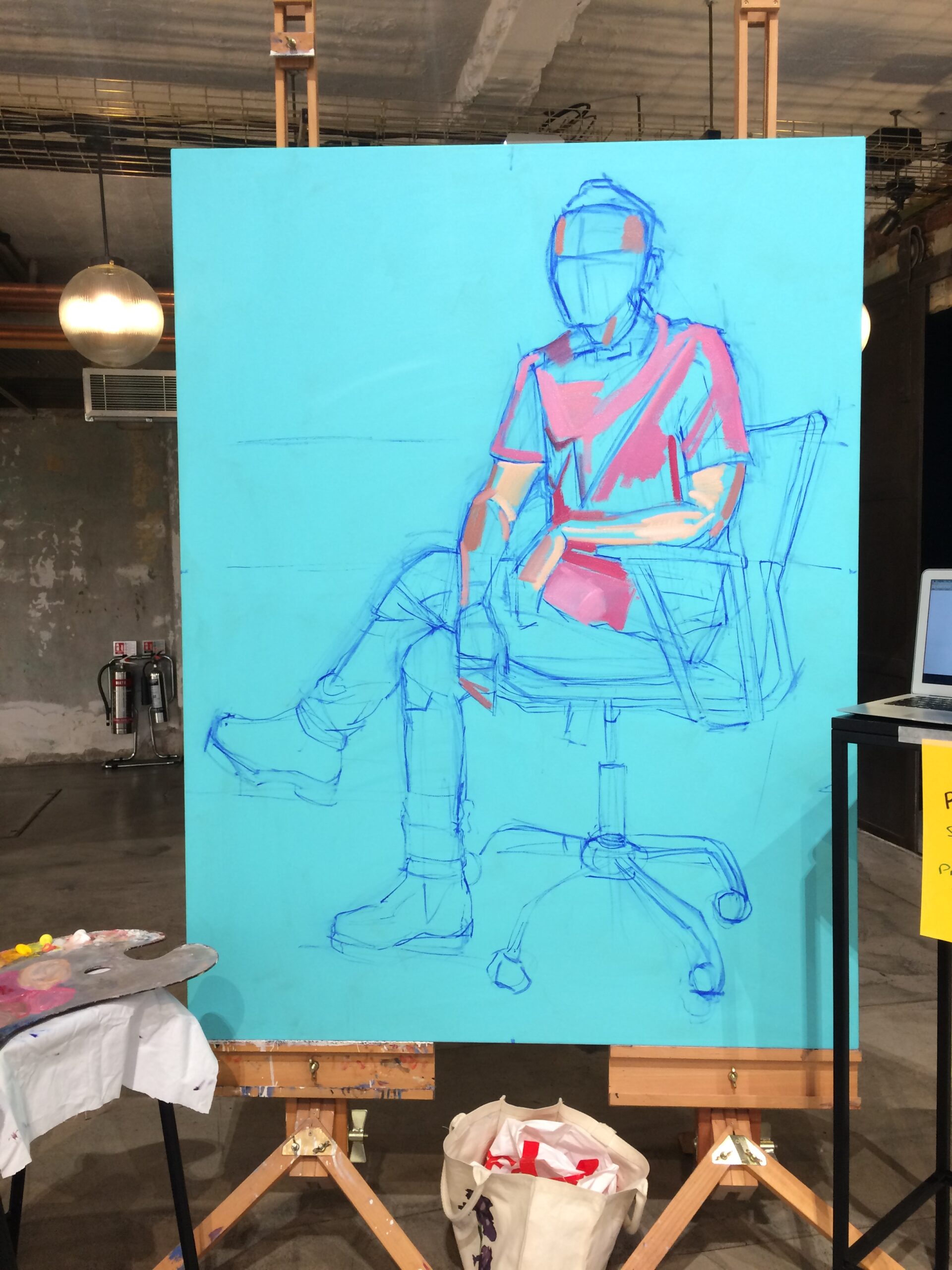 The composition I chose for the painting was one that pointed to Lola’s intensity of vision as an artist, but also the quiet compassion and thoughtfulness which is evidenced in her work. Her pose – seated with legs crossed and slightly leaning forward – suggests she is listening, but also watching and assessing as an artist working with a visual medium. Her attire – the Dr Martens, jeans, buttoned up shirt with bow tie – as well as her tattoos and glasses suggest an individual and non heteronormative aesthetic. At one point I considered adding a photograph of Lola’s to the background but eventually decided against it as the composition would have more impact with an uncluttered background. It also strengthened the diagonal momentum through the composition, which is highlighted by Lola’s pose and the ‘X’ shape made by her limbs with her hands occupying the centre of the canvas. 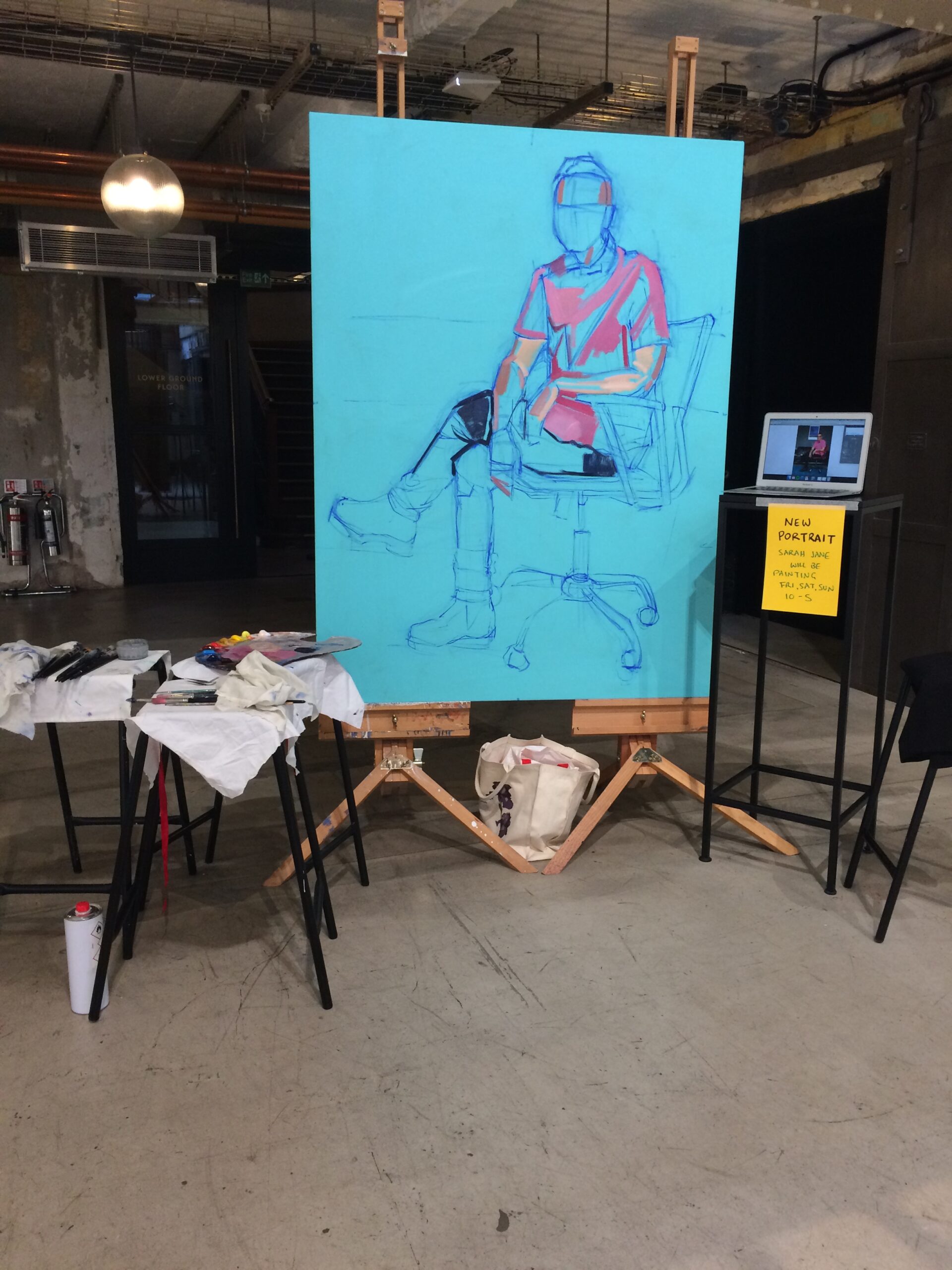 Painting in public at The Department Store, Brixton, September 2019

The painting was mostly worked up in my studio in Brixton. I began on cotton duck canvas with a cerulean ground (a number of coats, sanded in between). I am loath to use a grid (this has always seemed a soulless way to begin for me personally) but I do mark where I believe the midway points are on all sides of the support as well as the mid point. I then go straight in with a very loose drawing to begin to work through the placement of the figure on ground. I use a thin (usually very old) pointy and stiff brush and ultramarine oil diluted with solvent. The initial drawing is very much subject to change and I spend quite a lot of time moving things around and trying to get everything in the right place. The thinned oil and solvent mixture is easily removed with more solvent. 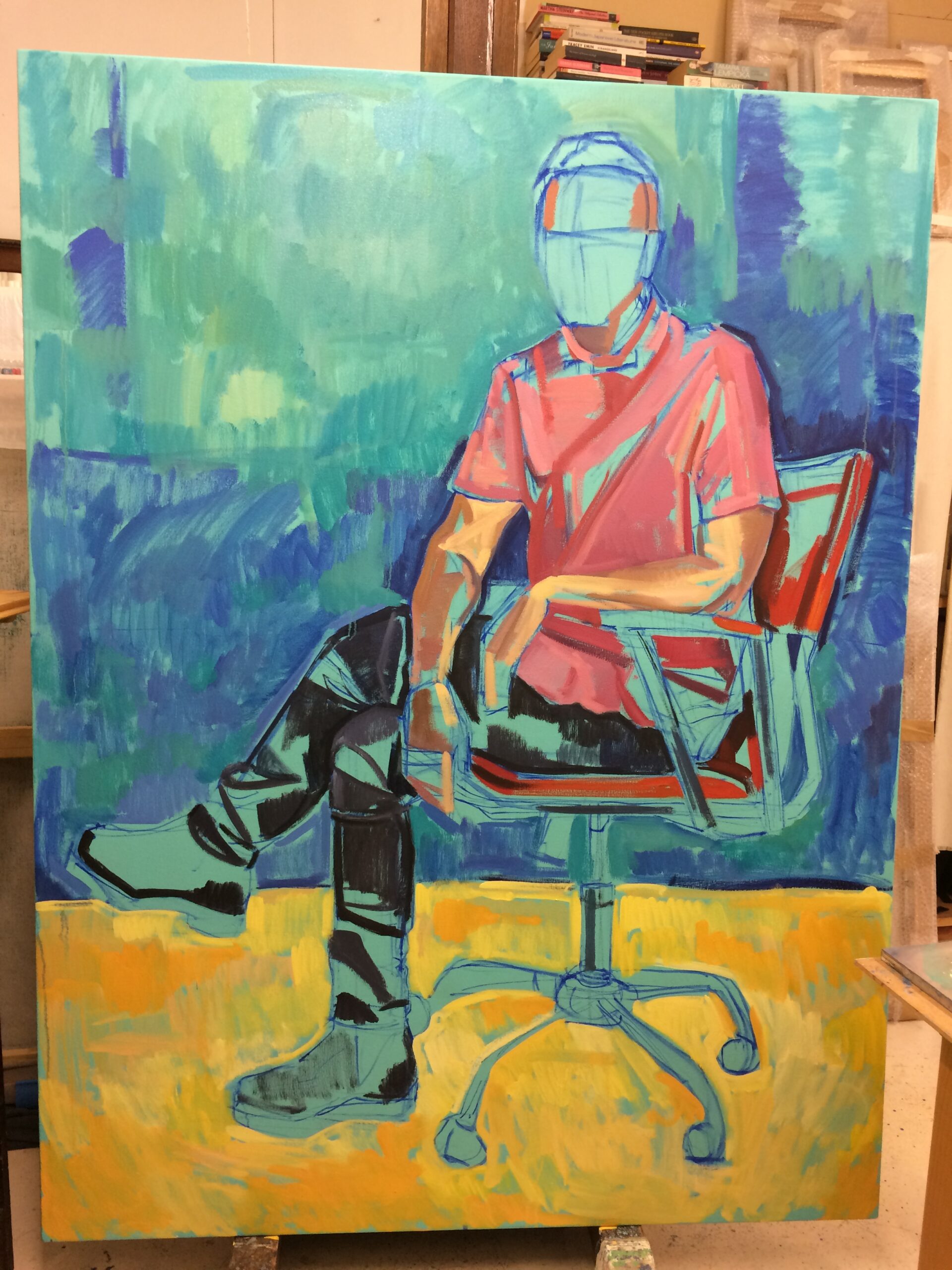 Lola Flash as a work in progress

If things are too pinned down or too certain at this point I easily lose interest and so I try to leave things open to change for as long as possible. Thin areas of colour are applied and I work in a very intuitive way. It’s an intimidating part of the process, especially on such a large scale and so I try to just allow myself to ‘make notes about colour’. Sometimes I like to be very expressive in applying paint at this stage, knowing that only some of it will remain visible in the finished painting. I continue trying out colours, adding detail and building the painting up essentially until it is completed, using less and less solvent as I go. The final layers of the painting are oil straight from the tube. I don’t use any mediums at all as I prefer the paint without. 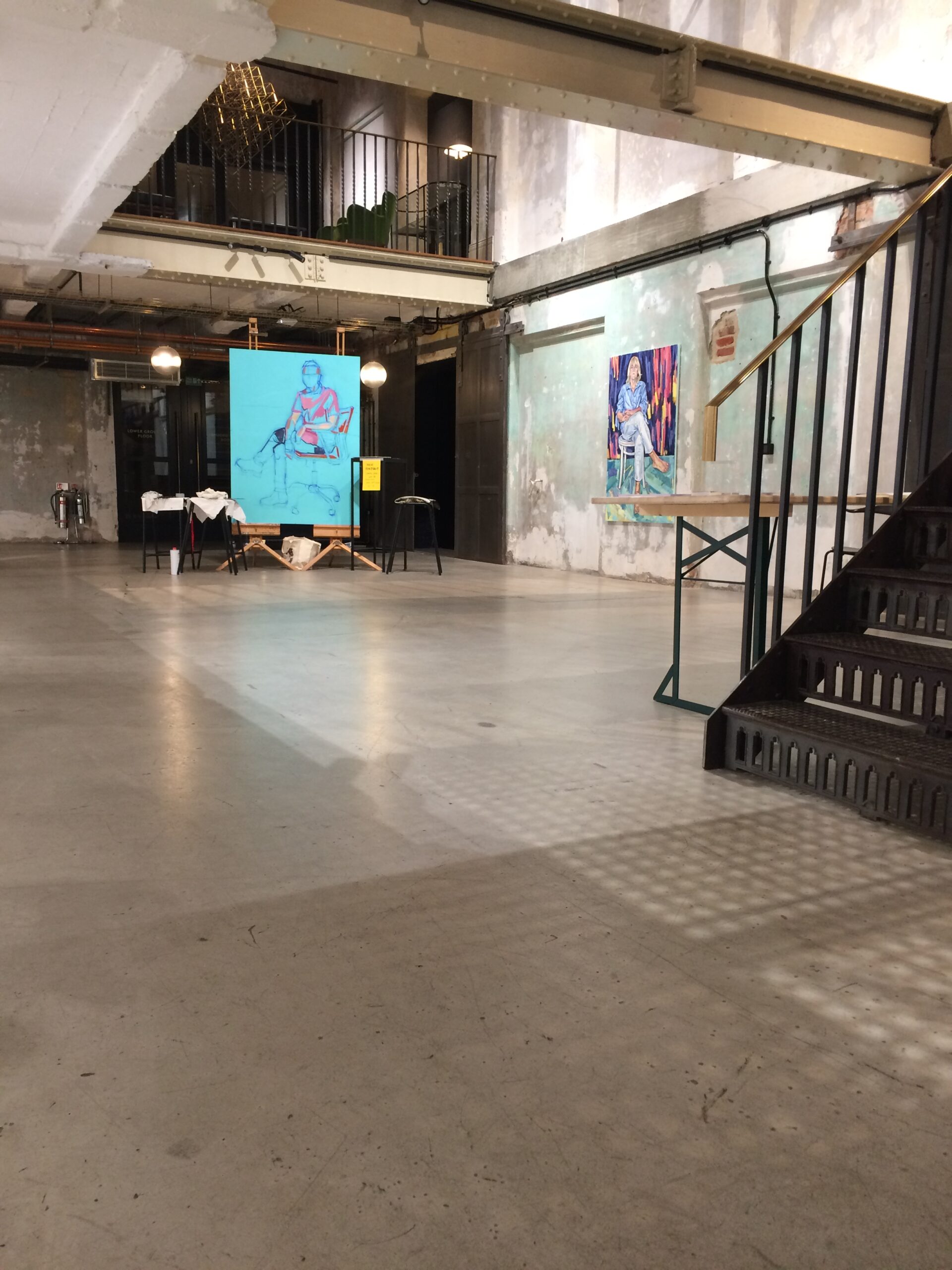 Work in progress at The Department Store, Brixton

Although most of the portrait was painted in the studio, I also worked on it at an exhibition space in The Department Store, Brixton. This is a fabulous architectural space, revamped by Squire & Partners, that houses offices, a members club and a gallery space. I had an exhibition of 18 large portraits on display there in November and was in the space daily. Wanting to draw people into the gallery and provide some insight into the making of a painting, I had thought it a good idea to be working on something that was large and visible from the window. The choice was somewhat made for me when the National Portrait Gallery announced that the due date for the first round of submissions for the 2020 BP Portrait Award would be early December rather than the usual January slot (because of the planned renovations to the NPG). This really threw my schedule out and meant I would be hard pressed to wrap the show and complete Lola’s portrait in time and so working on it in the space seemed the perfect solution. I had many interested people stop and watch or ask questions – from the catering staff to architects working in the building and people walking past on the street. 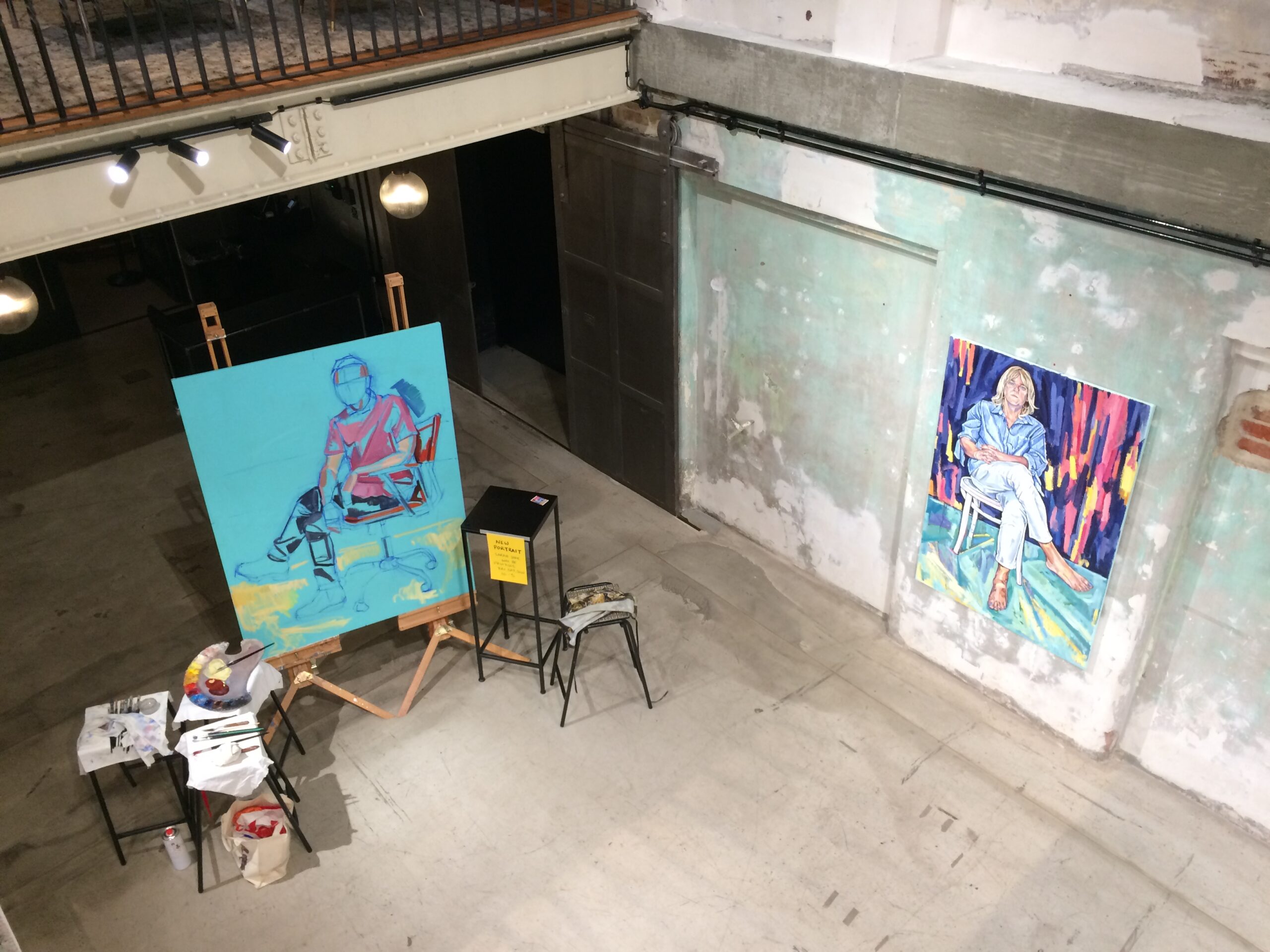 In the studio, I paint at an H easel and make my own canvas with pre-cut stretcher bars and cotton duck canvas (12 ounce usually). Although stretching and priming is an enjoyable process, it is time consuming and so if I’m pushed for time I buy stretched linen canvas off the shelf. My brushes are mainly hog bristle (Rosemary & Co.) and I have a preference for round. 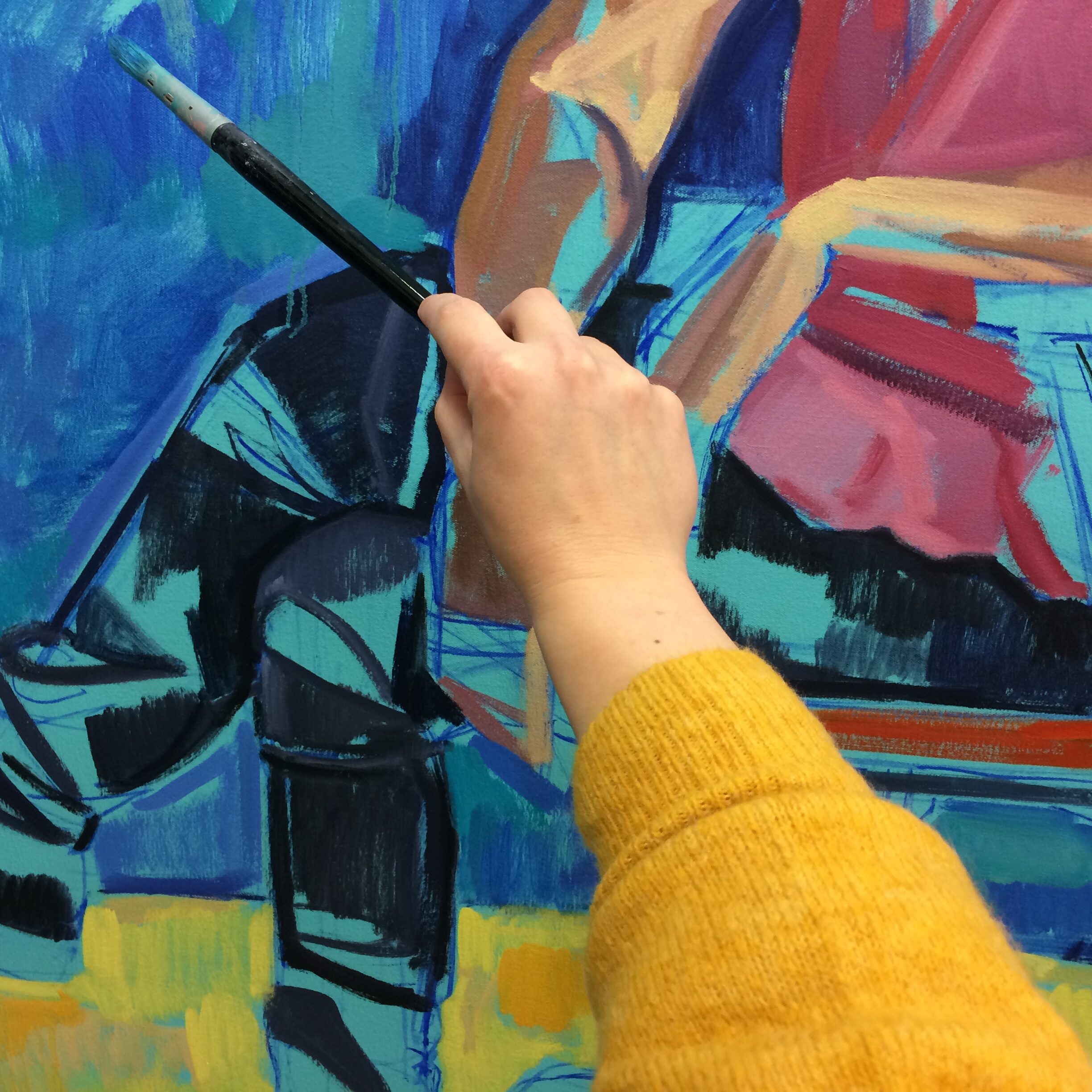 Sometimes I use small acrylic craft brushes for details towards the end of a painting, however these need to be replaced often as they’re not really made for the wear and tear of a canvas with any tooth. Winton oils by Winsor and Newton allow the body and volume I need working large and I use a split primary palette (a warm and cool of each primary plus white) with the sometimes addition of Burnt Umber, Yellow Ochre, Emerald Green and Lamp Black (all of which are handy short cuts). Specifically, my colours are: Titanium White, Zinc White, Lemon Yellow, Cadmium Yellow, Yellow Ochre, Cadmium Red, Alizarin Crimson, Emerald Green, Cerulean Blue, Ultramarine, Burnt Umber, Lamp Black. I use Kremer Shellsol T Low Odour Solvent to both dilute the oil and to clean brushes. 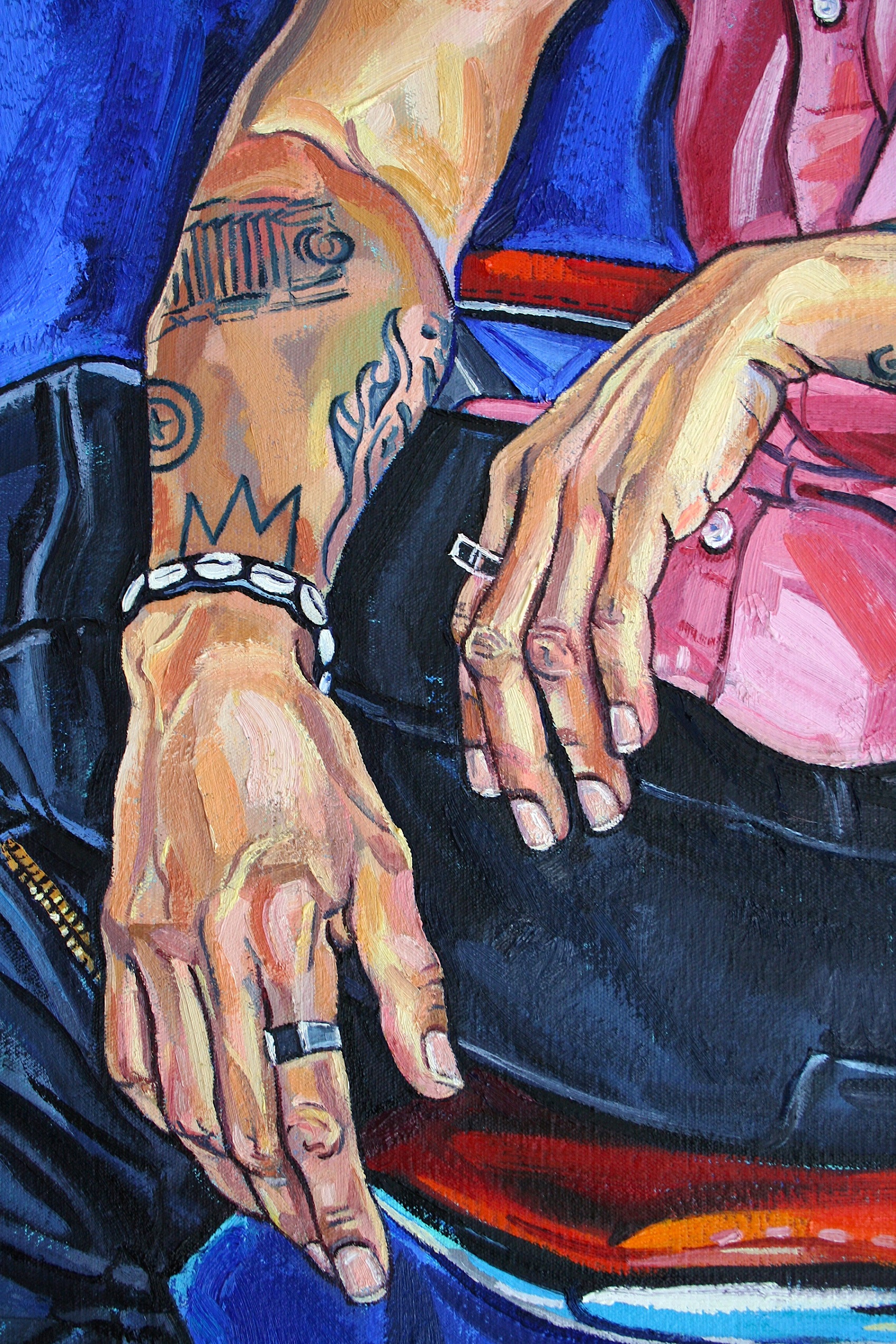 Sarah Jane Moon is currently exhibiting with the Royal Society of Portrait Painters (16th – 26th September at the Mall Galleries) as well as the BP Portrait Award (online).

It is hoped that the BP Portrait Award will show in Aberdeen (proposed dates: 10th October – 24th January).