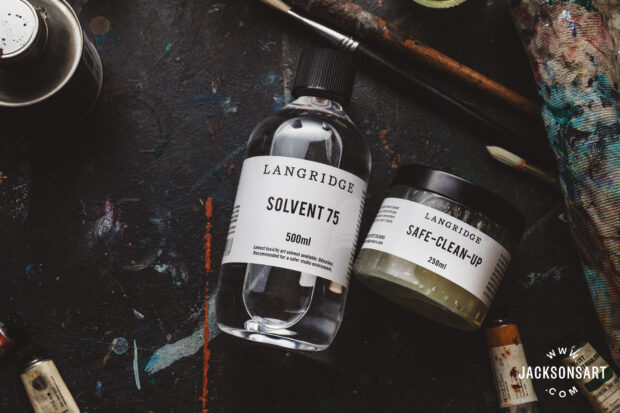 There are two products from Langridge that are designed to help oil painters have a healthier and safer work environment: Solvent 75 and Safe-Clean-Up. I wanted to give them a try to get a sense of what they are like and how their characteristics compare to those of our other low-odour solvents and brush cleaners. 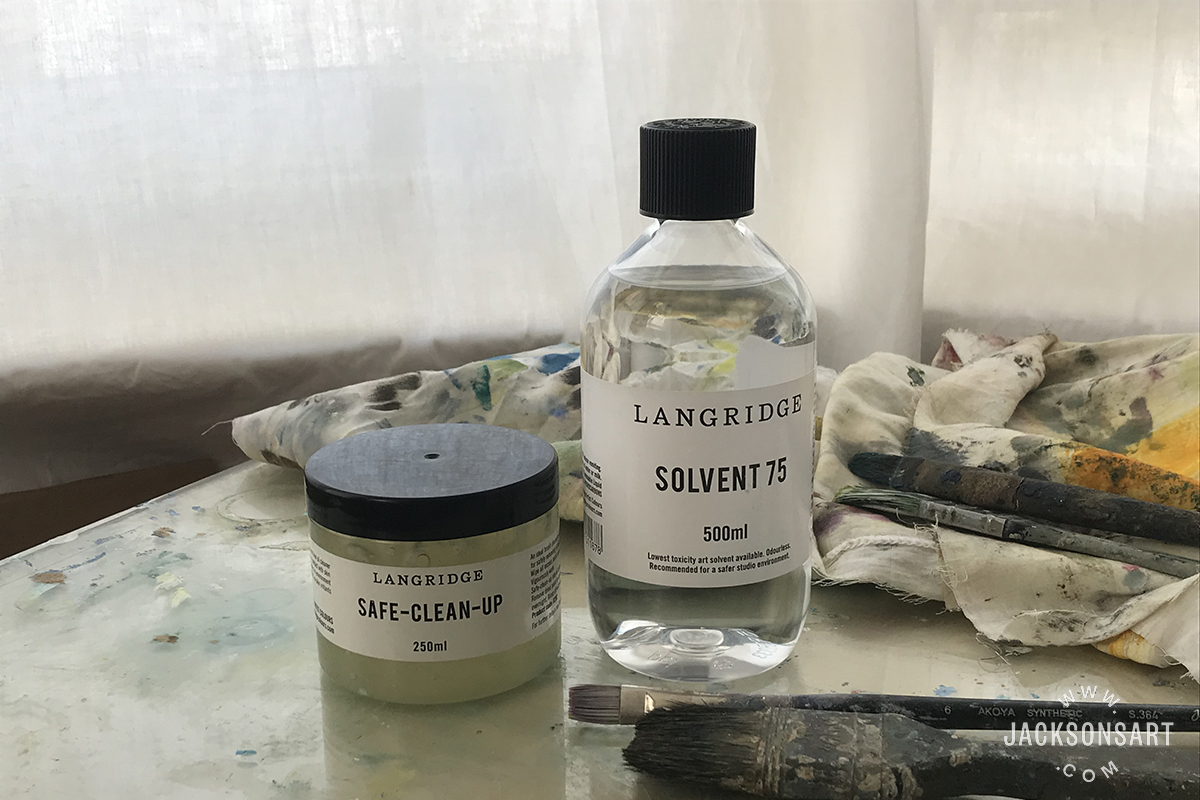 The Langridge description says: “the lowest toxicity diluent and solvent for oil colours available, recommended for a safer studio environment. Highly refined odourless mineral spirits (OMS). Is not classified as Dangerous Goods and can be legally shipped by air, marine and road transport. Alternative to traditional artists’ solvents reducing exposure to the more harmful compounds associated with turpentine and general petroleum distillates that contain acetone & toluene. Completely odourless. Leaves no residue after evaporation.”

Langridge Solvent 75 and Safe-Clean-Up back labels.

Just like all odourless mineral spirits, Langridge Solvent 75 is an aliphatic distillate of petroleum. Telling you that information though, is not very specific as there is a large range of products in the aliphatic petroleum distillates group which includes kerosene, naphtha, mineral spirits, odourless mineral spirits and other solvents. Jackson’s Pure-Sol, Gamsol, Shellsol T, Sansodor and Zest-it are all odourless mineral spirits (though Zest-it original has orange terpenes added, so it is then no longer odourless). They have some similarity but are not identical – all the brands have different odour, strength or bite, and flash points. I did a sniff test with all of them to compare them to the Solvent 75 and then I did a strength test, I painted with it and I mixed it with an alkyd medium, to get a sense of what it is like.

Note: Although Oil of Spike Lavender is a non-toxic, studio-safe solvent that has a very strong bite, I did not include it in this comparison of low odour solvents because it has a very strong odour, though many painters find it pleasant. (I really like it unless I need a gentle solvent.)

The Solvent 75 is the only truly odour-free solvent I have sniffed. All of the other low-odour solvents have a mild to moderate odour of varying kinds of chemicals. The first time I sniffed the Solvent 75 it had zero odour, it was like I was sniffing a bottle of water. I did it again another day and put my nose right in the bottle and it had the faintest trace of a smell of vodka, like perhaps an empty bottle of vodka had been rinsed out with water and I was smelling that, almost imperceptible. But from 10 cm away there was no odour at all. Because manufacturers won’t reveal their proprietary ingredients or processes, I don’t know if this is because it is a different format of petroleum distillate, paraffin, or if it is more refined, but they do mention ‘highly refined’ on their label and none of the other manufacturers say that.

Note: Because Zest-it ‘original’ has orange terpenes added and the ‘Zest-it Solvent (citrus-free)’ doesn’t, I just sniffed the non-citrus one, since I was looking for no odour. 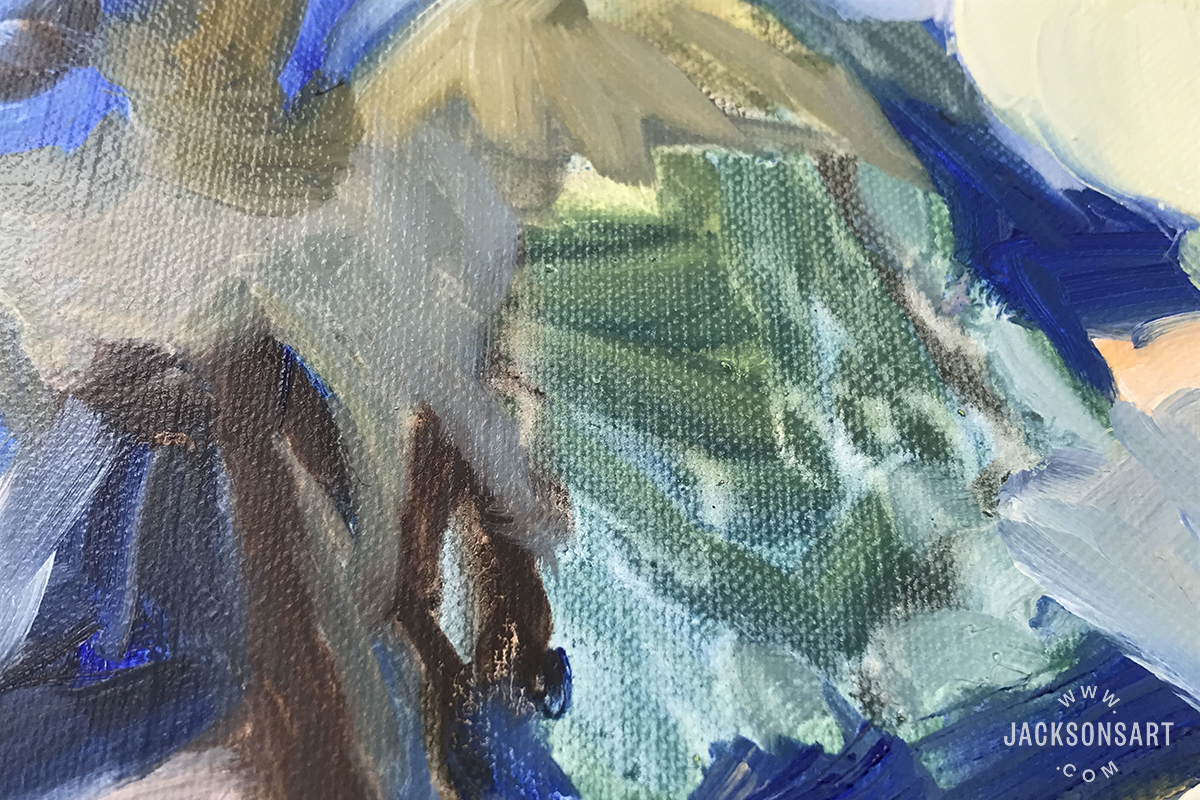 I painted an underpainting using just a touch of solvent and oil colour. The Solvent 75 worked as well as any of the other odourless mineral spirits, a little goes a long way with all of them for ‘melting’ a stiff oil colour.

As you use up a bottle of any alkyd medium, such as Liquin, Jackson’s Gloss Gel Medium, or Galkyd, the amount of space in the bottle with air increases and unless you deal with that your alkyd medium will harden before you can use it all up. The way to deal with it is to add a very small amount of solvent to the bottle each time you use some and shake it up, making the medium just slightly more fluid each time. You must shake it in, if it sits as a layer on top it actually hastens the hardening of the alkyd medium.

I mixed the Solvent 75 with an alkyd gel medium and it thinned it slightly just as expected, so it works fine for that purpose. 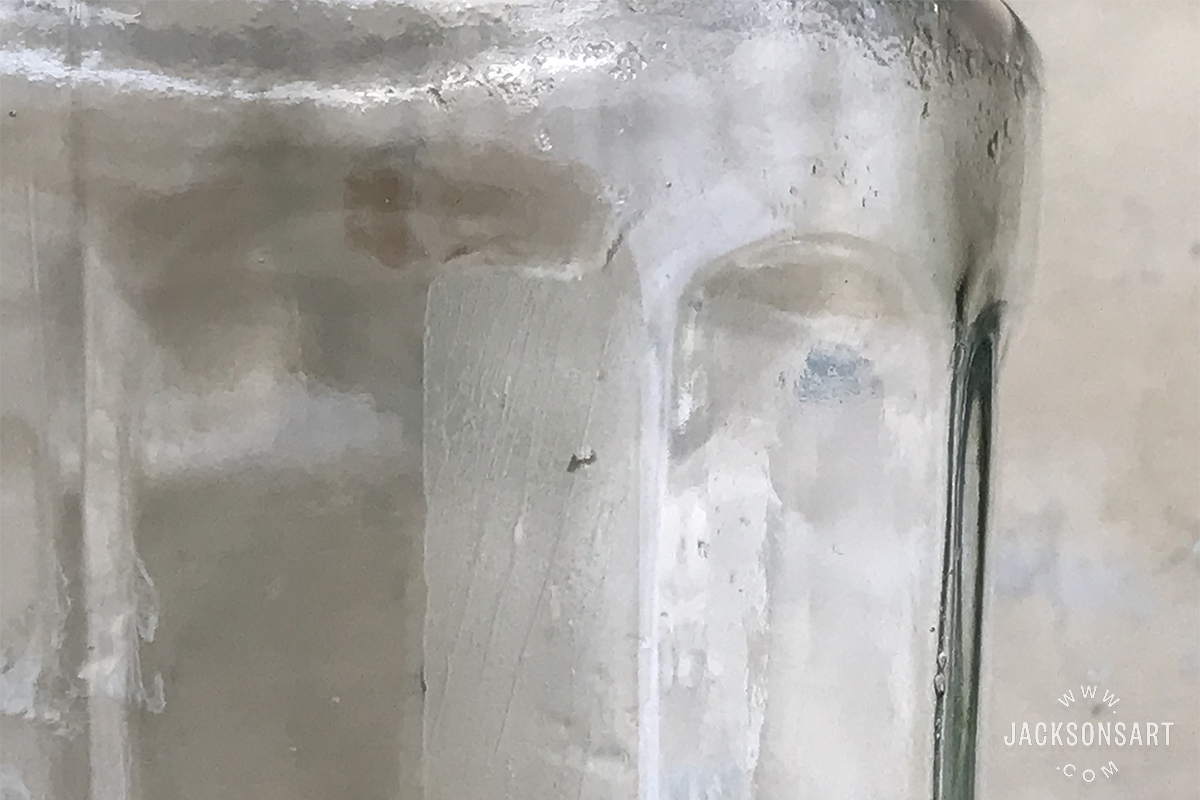 Solvents are often used for studio clean-up. I decided the simplest test for strength was to use it like I would any of the others for removal of sticker goo. I reuse jam jars in the studio and after peeling off the label I use a rag with a bit of solvent to rub off the glue residue. I also do this for the residue left on a brush handle when taking off the bar code sticker or if packing tape has left a sticky patch on a bucket or tin.

I found that the Solvent 75 is a bit more gentle than Zest-it for this task. It was similar to Pure-Sol – they both worked on one jar, but I had to work twice as hard to get the goo completely off than I did with the Zest-it and neither the Solvent 75 nor the Pure-Sol worked on the second jar. This might be an indication that its solvent strength is a bit weaker than some of the others, so Zest-it is still my preferred solvent for all types of goo removal.

Solvent 75 is named for its flash point of 75 degrees C (167 degrees F). The higher the flash point of a substance is, the less flammable it is. The flash point of all of the low-odour solvents is high enough to be considered Non-Dangerous in the studio and for shipping by air. So we can ship these as non-hazardous products. Unfortunately most airlines will not allow anything in suitcases that is called a solvent even if the flash point is considered Non-Dangerous, so they usually can’t be taken on flying holidays unless you want to take the chance that it will be confiscated. Be sure to check with your airline as each case may be different. 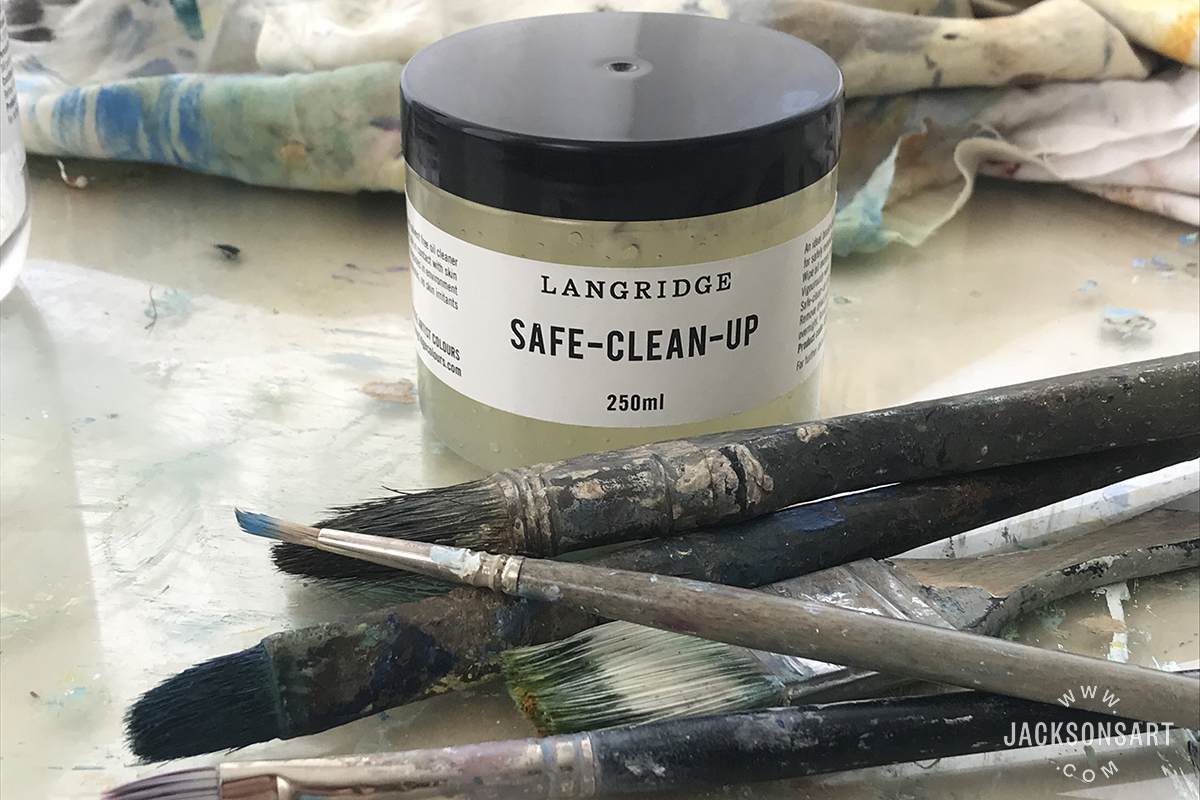 The description and instructions for Safe-Clean-Up are: “solvent free, non-toxic hand and brush cleaner for safely removing oil and acrylic paint.
Work into the brush bristles and wash under running water to remove paint.
Even dried paint can be removed by soaking brushes in Safe-Clean-Up overnight.” 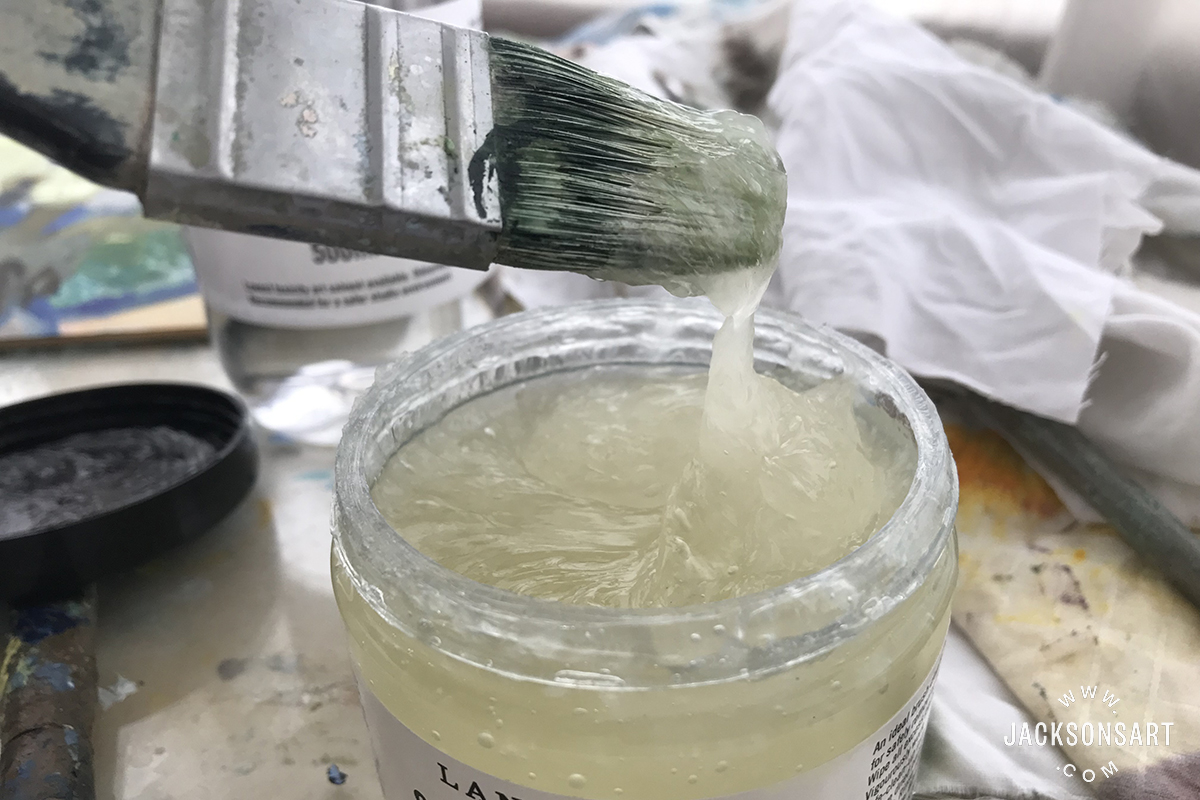 The texture of the brush cleaner when I scooped up a bit on a brush is a bit like softened petroleum jelly. When I rubbed a brush in it, it became creamy and then when I added water it became slightly foamy. As I rinsed it away it felt like creamy oil, like butter was on my hands, right up to the last minute when it washes off without any greasy trace.

I tested it on oil brushes in a range of states: freshly used, three days of drying – feeling gooey with bristles sticking together, many weeks dried that was as hard as a rock (it had fallen behind a table and was overlooked), and two brushes that were given to me that had been left to dry full of paint for over 10 years – and the paint was deep in the bristles of these thick brushes.

The hard as rock brushes didn’t budge though, so I followed the instructions to rub it in as best as I could, and coat them in the cleanser, and leave them overnight. The next day the hard as a rock brush took five minutes of bending and rubbing across the ridges of my draining board and wetting and adding a bit more cleaner and working it in and bending it from all directions, but after five minutes it came completely clean. I saved one of my favourite brushes that was in a hopeless state!

Pushing the brush with all my might, but the brush is completely hard with oil. 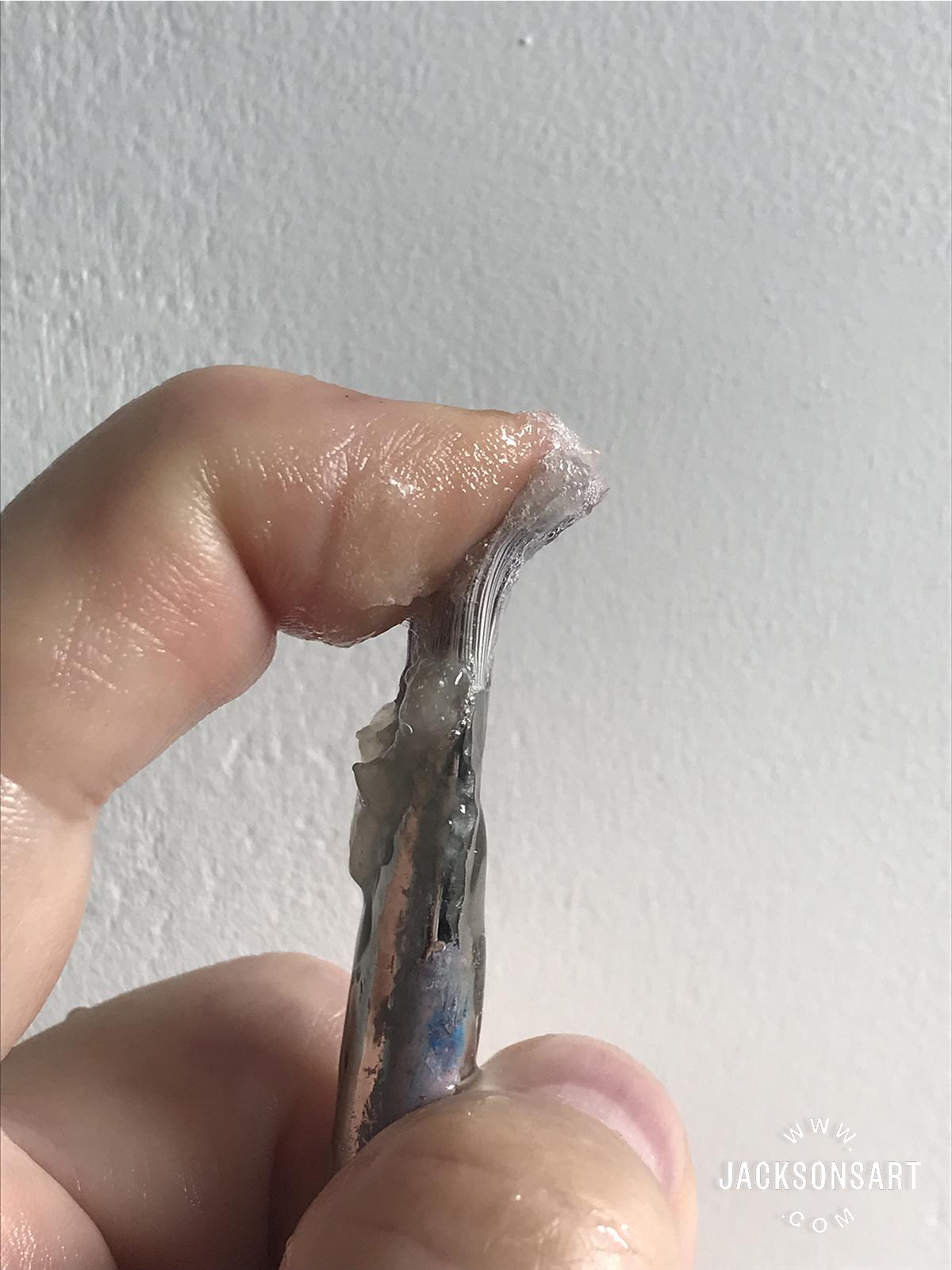 After leaving it to sit coated in the Safe-Clean-Up overnight the brush has started to loosen up. 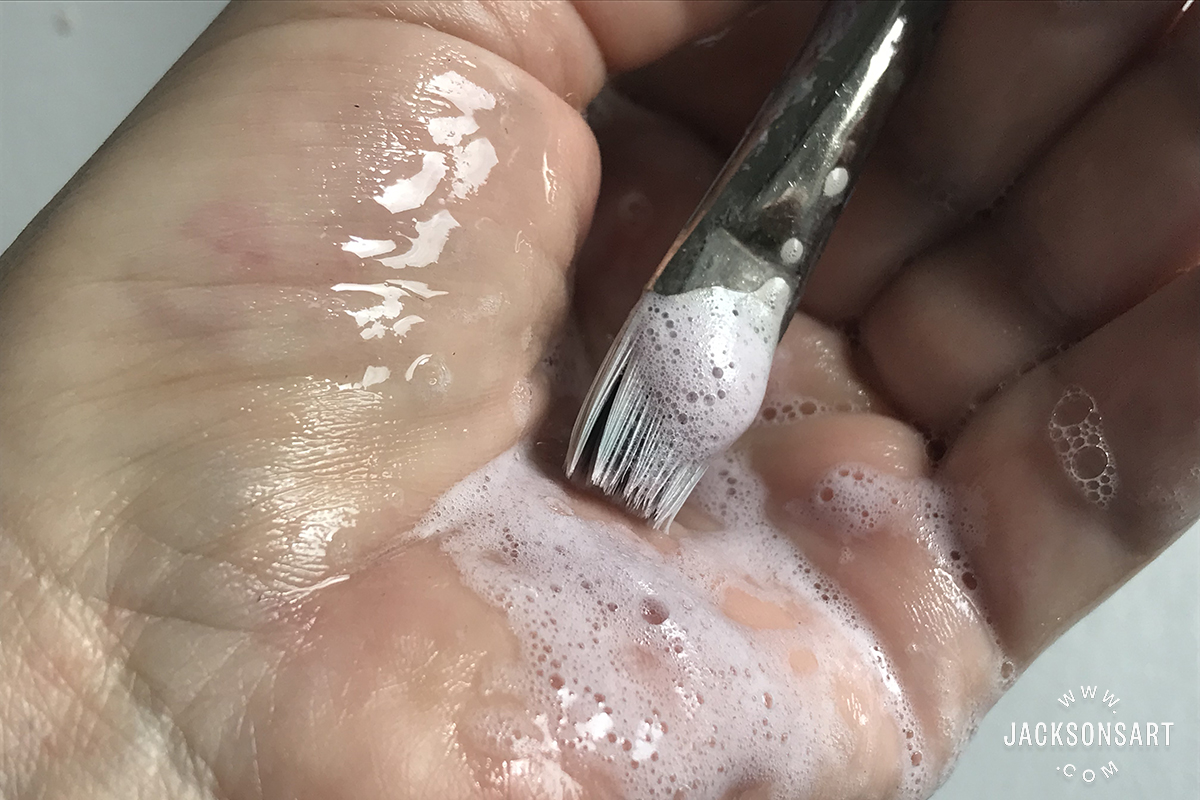 With some rubbing across the draining board and lathering up, it eventually comes clean. I didn’t do much of the rubbing of the brush in my hand, it’s best to wear a washing up glove or use a brush egg to save the skin on your hand. 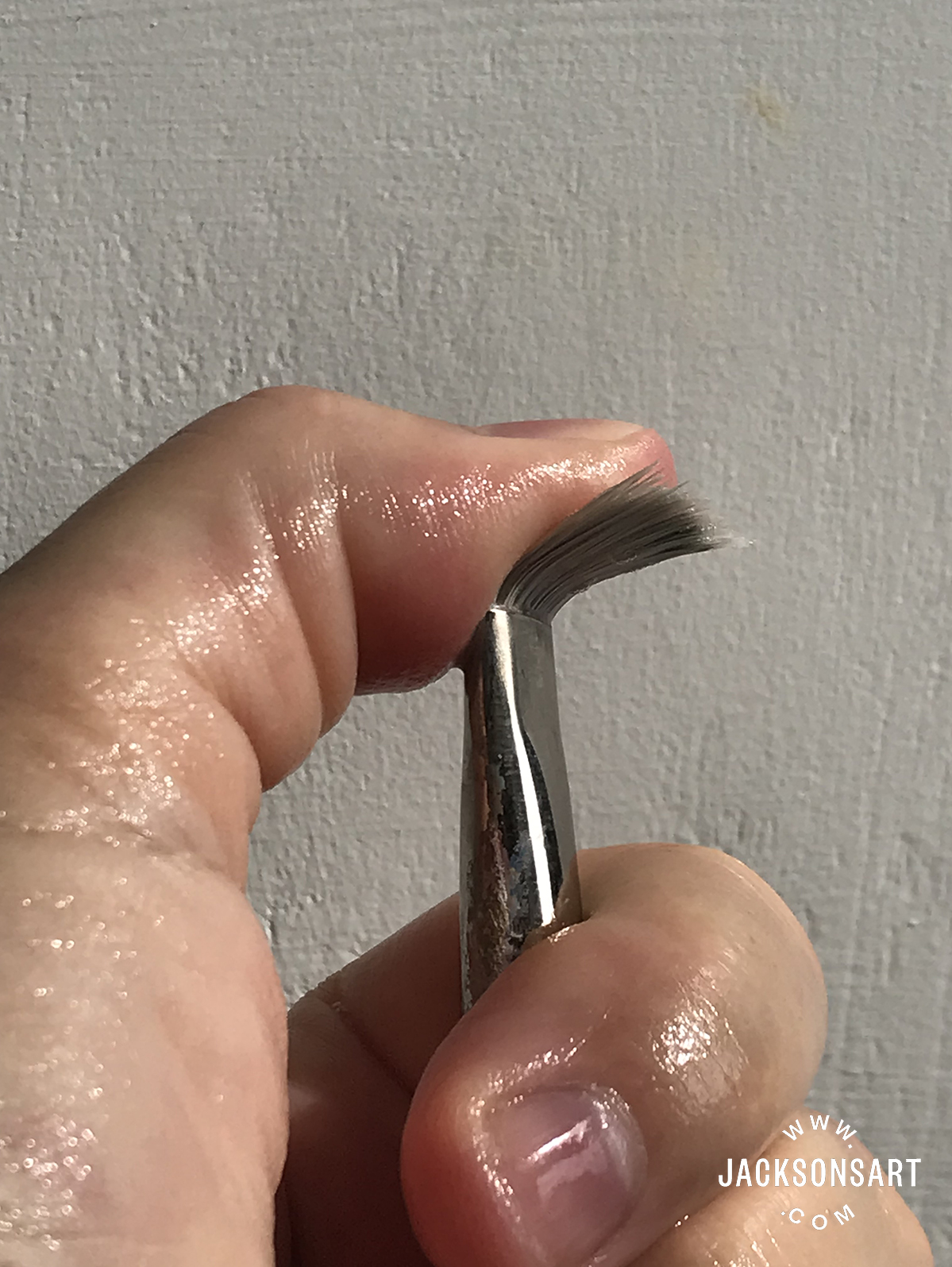 But the two ancient crusty brushes only came partly clean, though that is better than I ever expected. Because I think they had never been properly cleaned during their period of usage so the paint up in the bristles was built up over years and was too thick and solid. The painter had just kept putting them in a can of solvent, and only removed them to paint with them. Then one day they were all boxed up and put away in storage. The Safe-Clean-Up cleanser did make them usable again by cleaning the end of the brush, so the bristles are loose and flexible again, but the half of the bristles near the ferrule wouldn’t loosen. I think they may have even been this way back when he was using them. So it was a harsh test and the cleanser did pretty well. 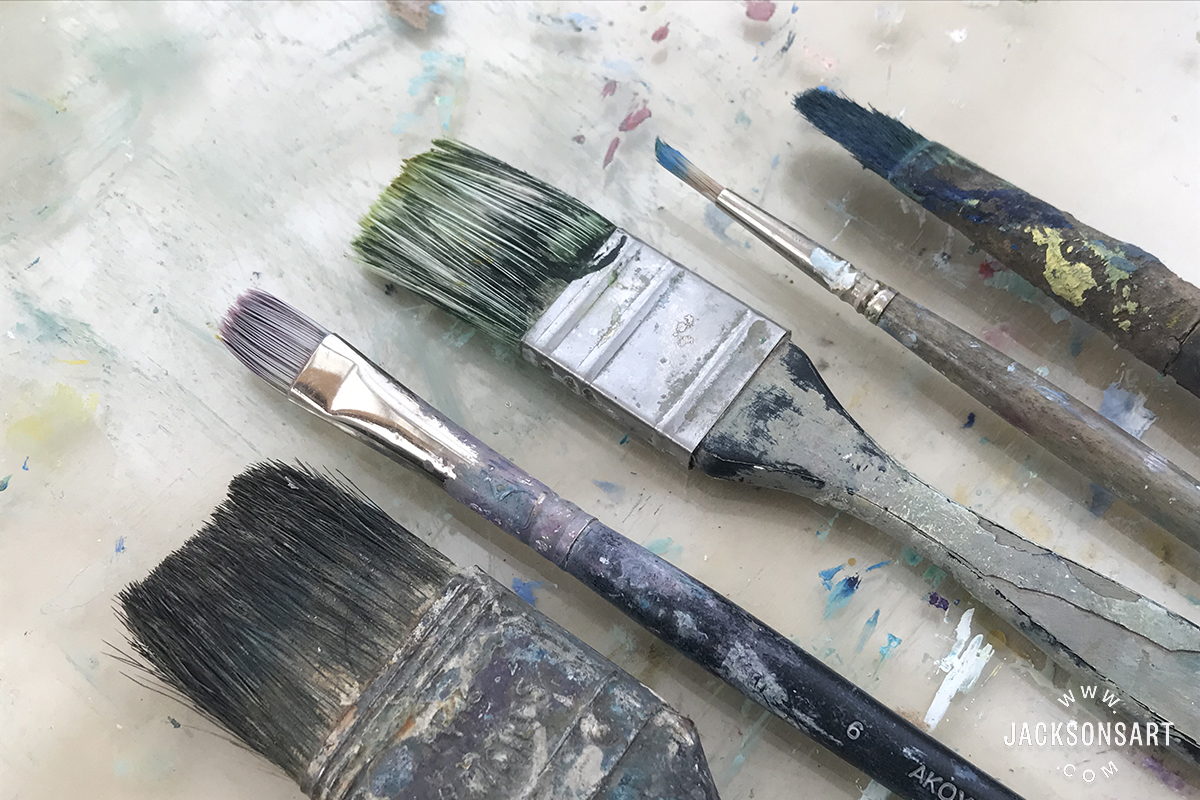 A range of dirty oil brushes, some fresh and some very hard. 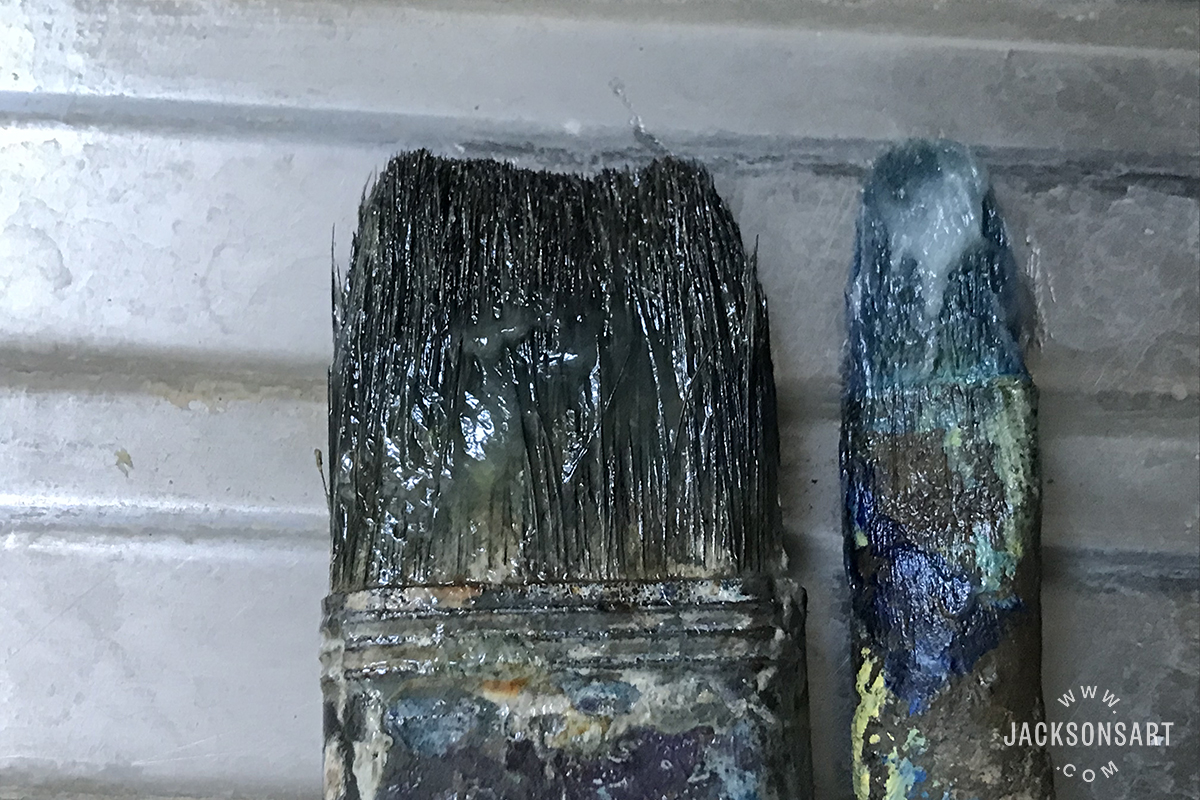 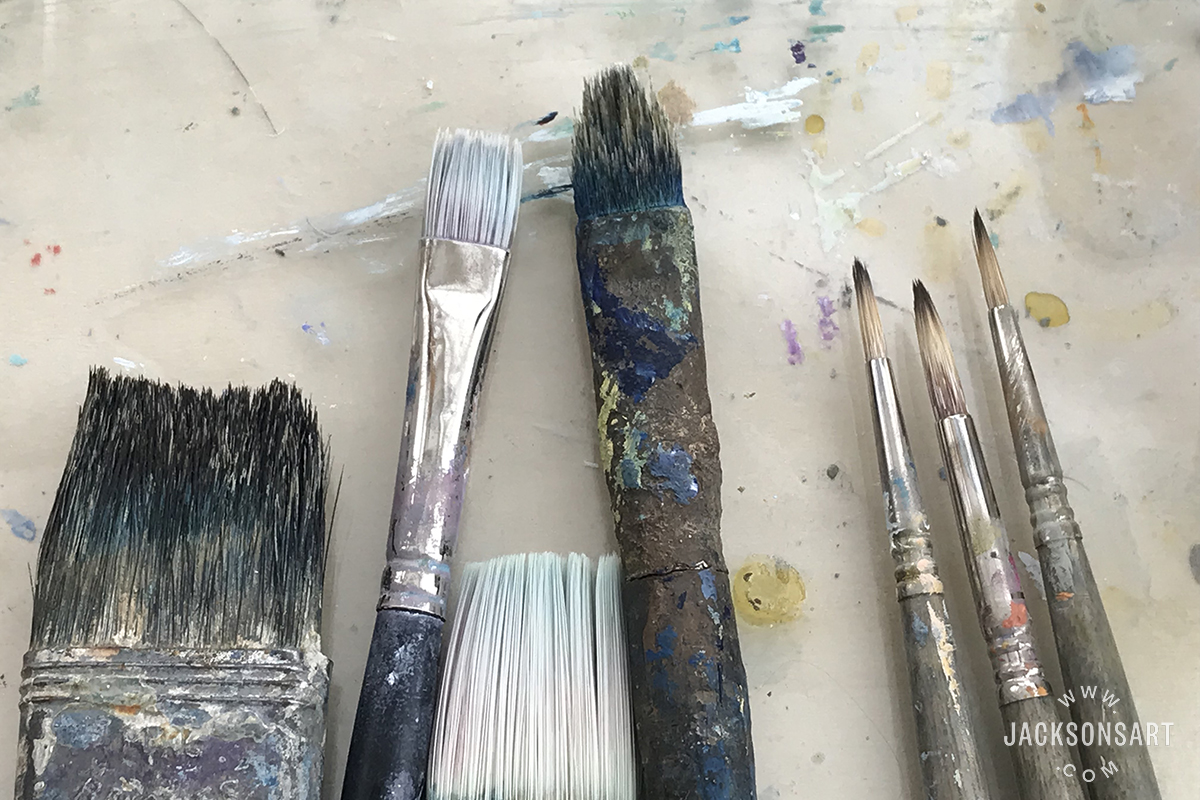 The same brushes after cleaning with Langridge Safe-Clean-Up.

I think this is a really good product. It is excellent for semi-dried gooey brushes and with a little elbow grease you can restore most dried hard brushes.

I compared it to washing up liquid, Daler-Rowney Water-washable brush cleaner and my memory of most solid brush soaps and it is better for the semi-dried and dried brushes than most other soaps except perhaps The Masters Soap. But for fresh oil brushes it isn’t necessary to get out a heavy hitter, it is just as easy to use Marseille soap which is much more economical and it too is safe for your hands.

So now, with Langridge Solvent 75 and Langridge Safe-Clean-Up you have more choices of safe, reliable products to use for oil painting.