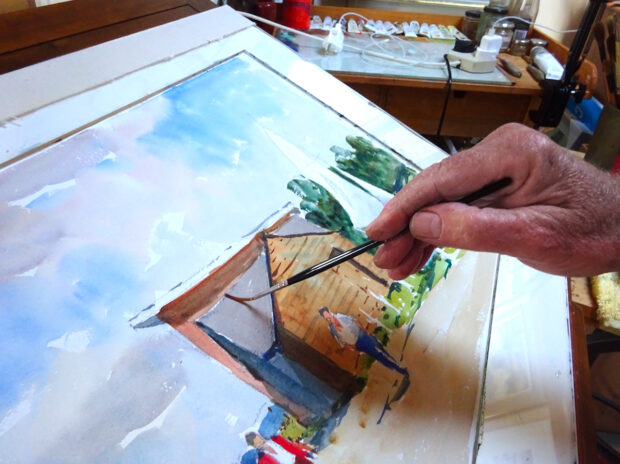 In September, we asked watercolour painters Andrew Pitt and Gary Cook to test a few brushes of their choice from the Jackson’s watercolour range. To get the full experience, both artists used the brushes to create a complete watercolour painting and here, they tell us about their findings.

A few weeks ago Jackson’s asked me if I would be interested in reviewing some of their brushes. I had to say this was not something I would do normally as I believe it can be a bit misleading to suggest that a particular brush will enable a student to paint like their tutor. To their credit Jackson’s emphasised they wanted a genuine, honest response to their brushes. In the end, I need not have worried, the Jackson’s Raven brushes are some of the best synthetic haired brushes I have used. They have a nice chunky handle which I feel encourages bold brush work. They also take up and deliver the paint well. 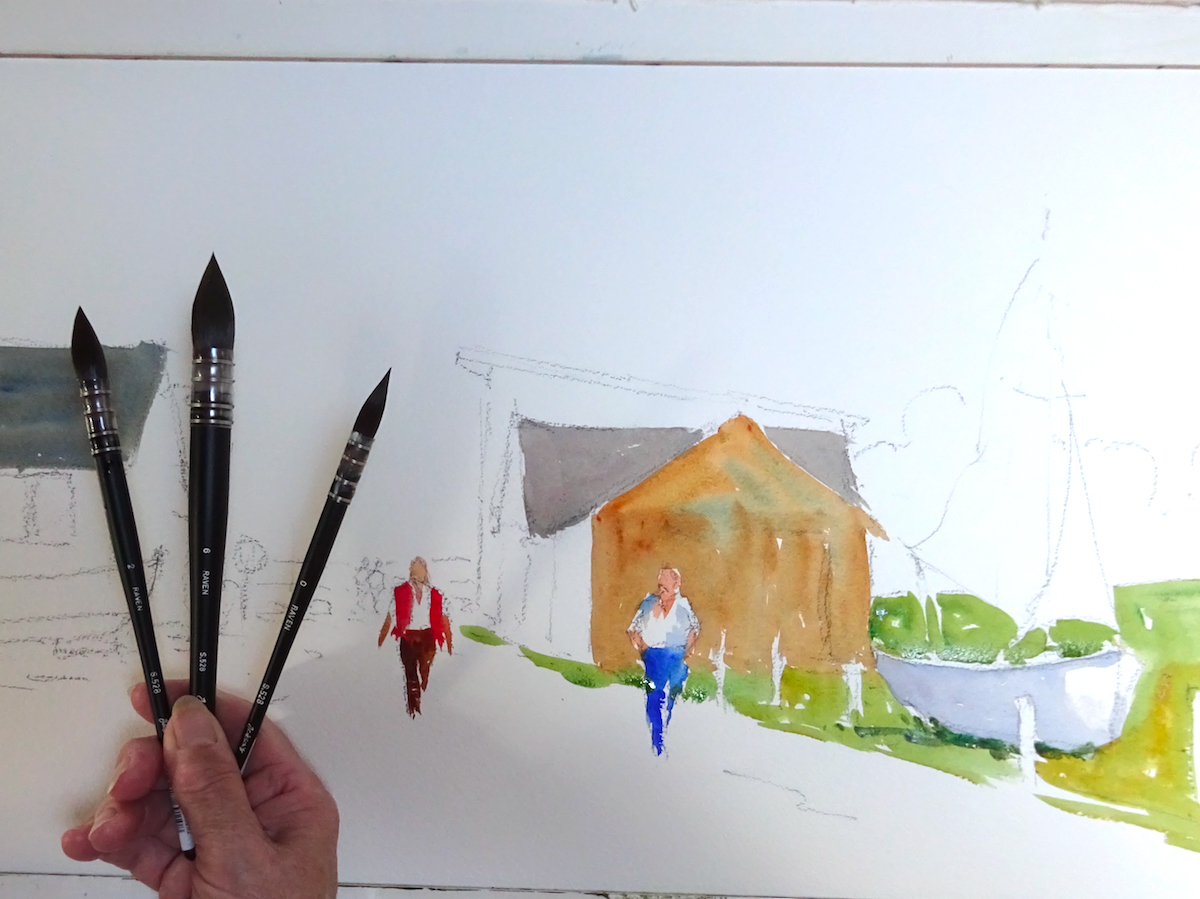 To ‘make friends’ with these new brushes – new to me, I have never used them before – I thought it best to attempt to paint a full watercolour rather than test them by painting isolated swatches of colour. They are nice to hold. Probably the main difference between by usual brushes is the softness of their hair. It is very soft, but seems to return to shape when wet. We all get used to the pressure required for a brush to deliver the paint to paper. The Raven brushes point well so are ideal for painting large areas which have some small shapes without the need to change brush mid-wash. 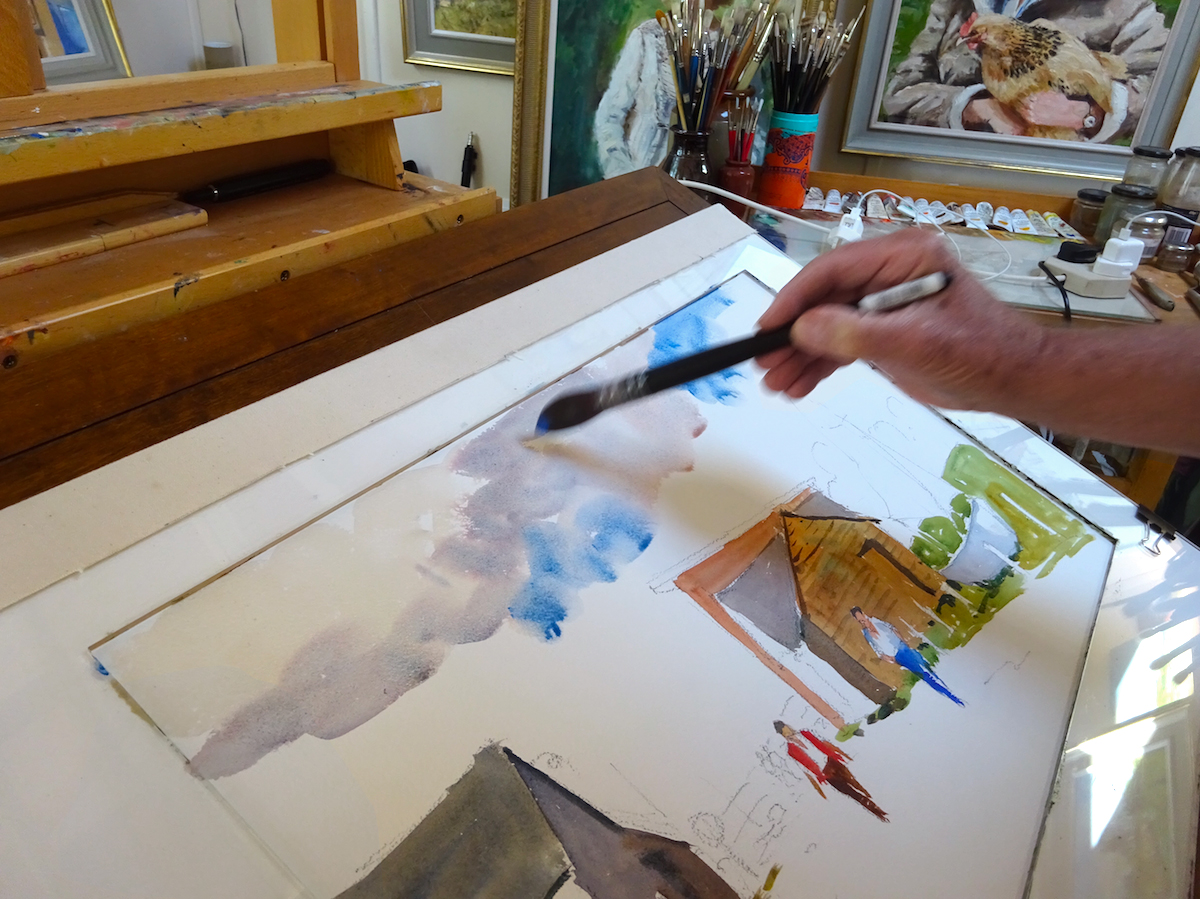 I also tested three of the Jackson’s Riggers. I think Riggers are difficult to use well and I’m not sure I have found, let alone mastered, a good Rigger technique. I found the Studio Synthetic Watercolour Rigger Brush Sizes 0 and 2 suited me best. Frankly, the mark made by the Size 4 Rigger could be made by the Raven Mop, Size 0 or 2 as they pointed so well. It is more satisfying and professional to paint with the largest brush you can manage, that also makes the mark you have in mind. 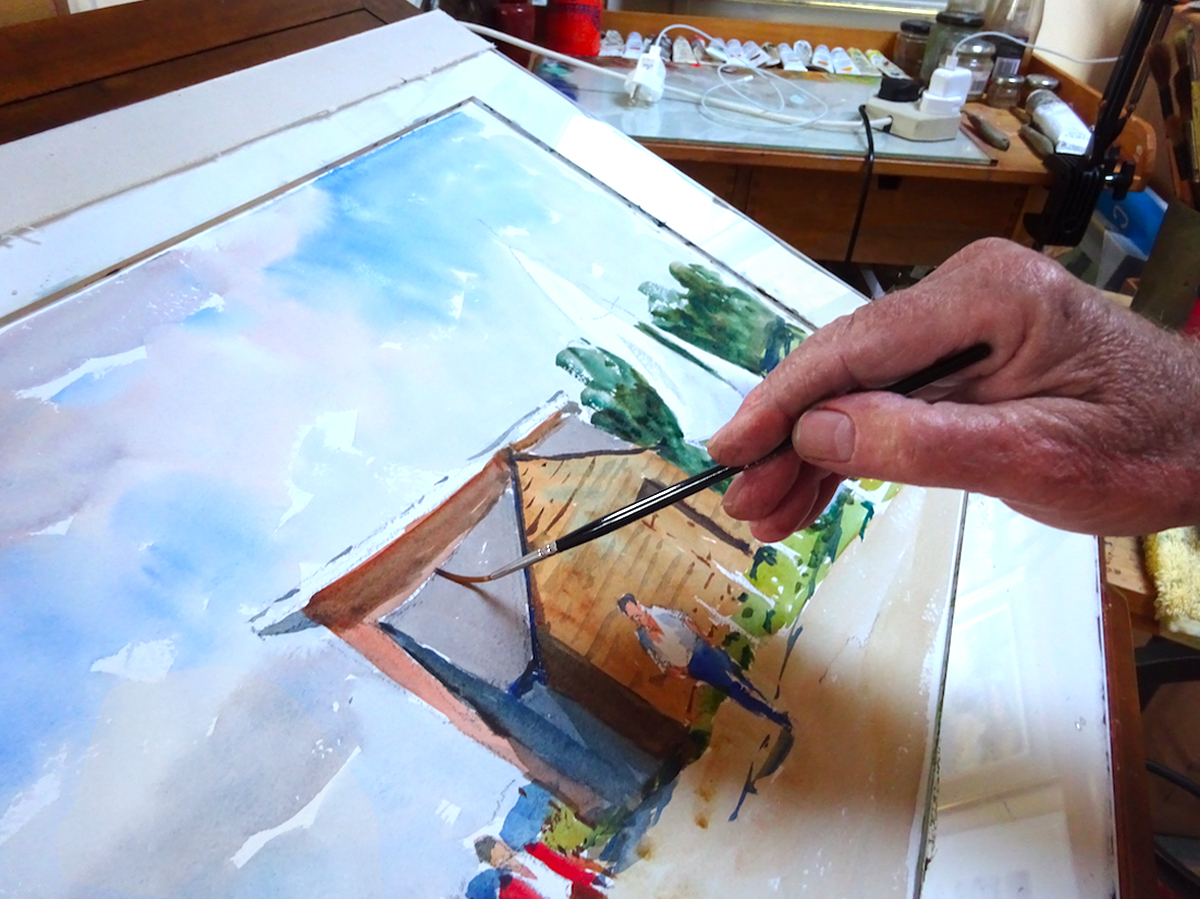 I would certainly recommend Raven brushes if you are starting to paint or have realised that your usual brushes are far too small. It is very common for painters new to watercolour to go for what I call, ‘the false security’ of a small brush. 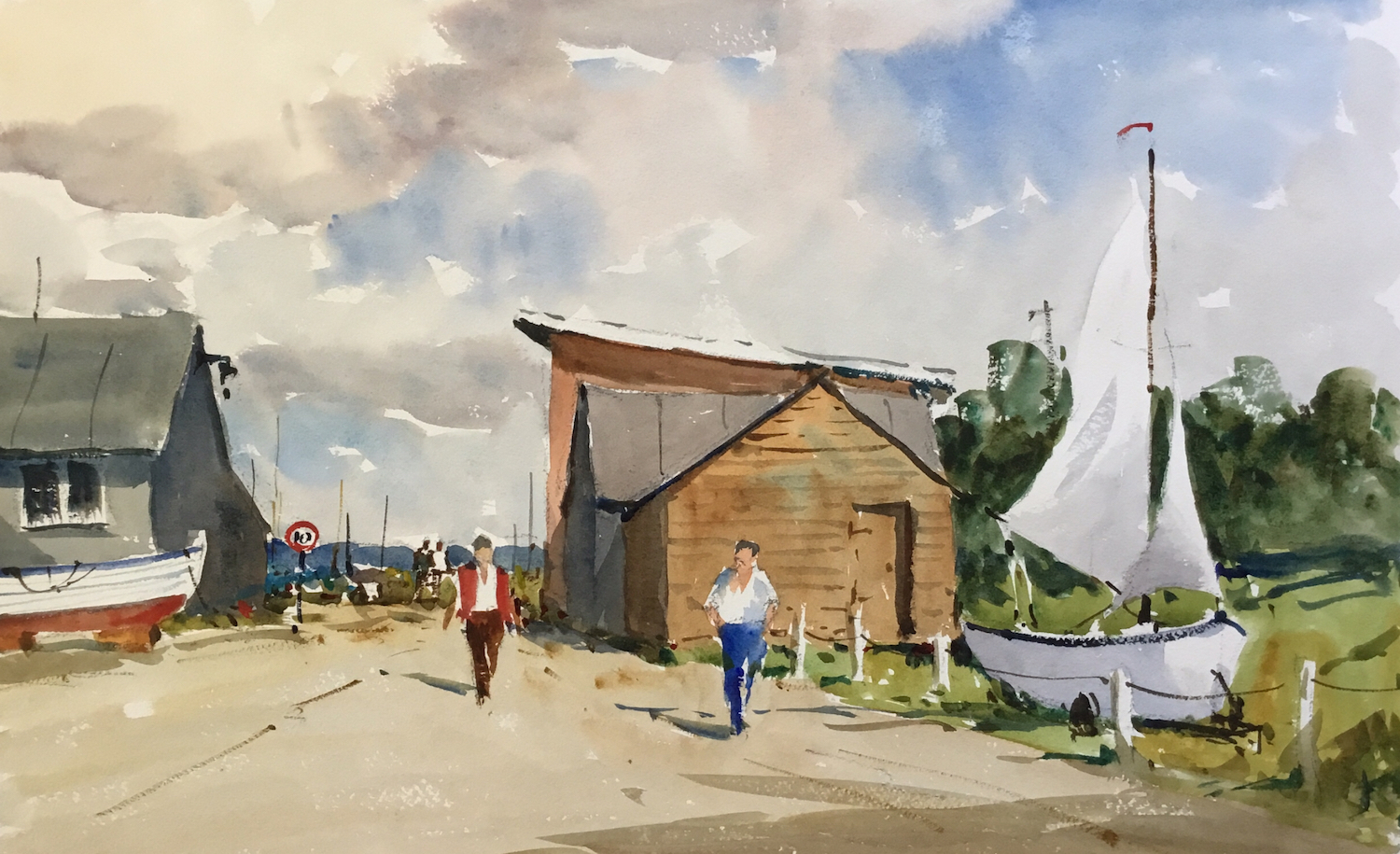 Watch Andrew’s video review of Jackson’s Raven and Rigger brushes as he paints with them for the first time:

Andrew Pitt started painting when he was 11, inspired by watching visiting artists paint the Thames barges in his home town of Maldon. He was educated at the Gilberd School, Colchester and at St. Andrew’s University.

He has had many solo exhibitions and been teaching and giving demonstrations for over 40 years. He is particularly well known for his simple, direct watercolour technique.

Andrew has contributed articles to The Leisure Painter magazine, Town House Films produced a DVD called, Watercolour: Pure and Simple with Andrew Pitt in 2008 and in 2019 he published his first book, Seasons and Reflections: Notes on Painting in Watercolour. There are videos, watercolour workshops and studio notes for fellow painters available on his website.

Andrew lives in Suffolk with his wife Rachel and her flock of chickens. 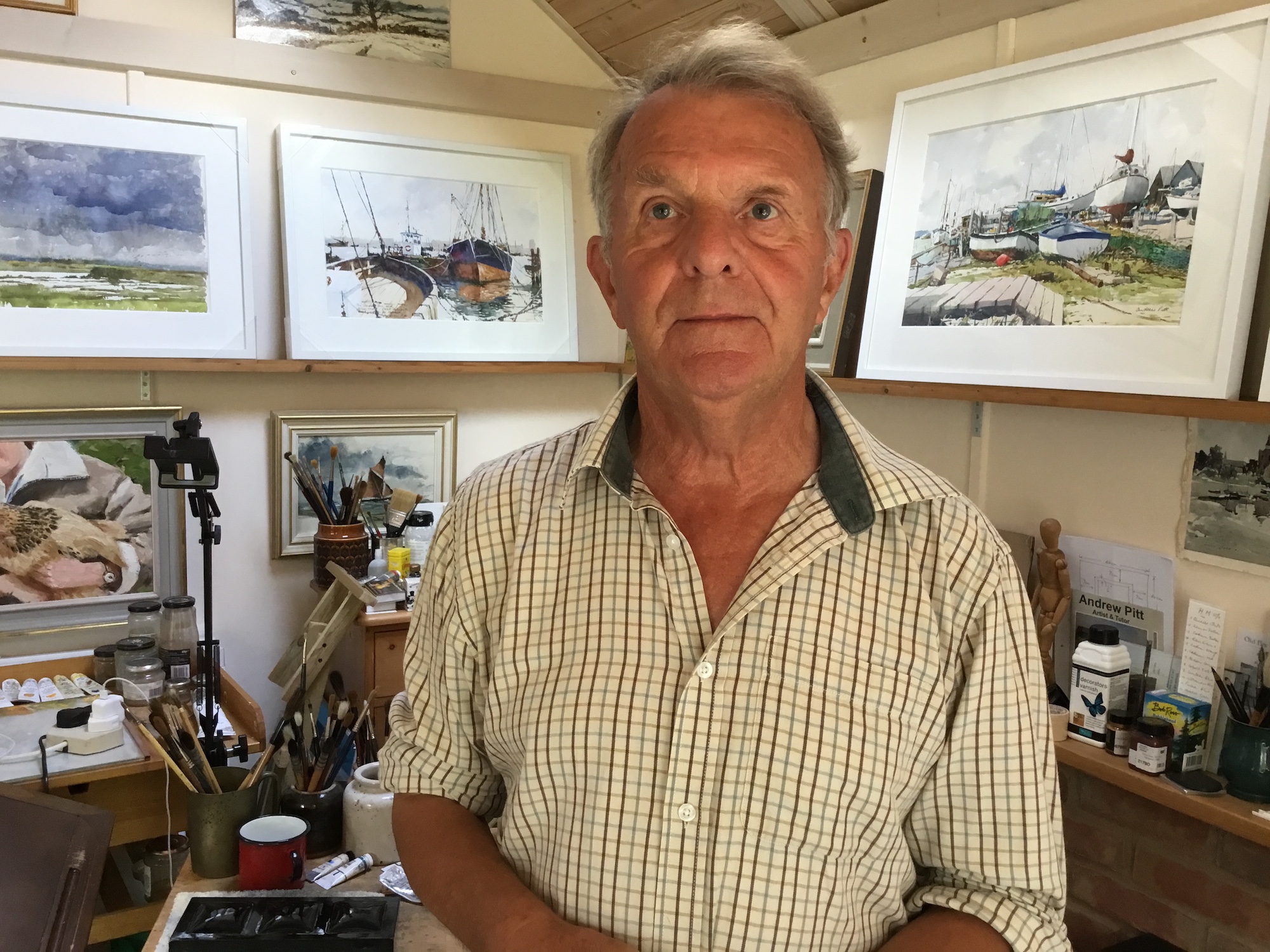 I’m sure I’m no different from most artists in that I have rows of carefully curated pots of brushes in my studio, which look nice, but end up gathering dust as I use the same favourite brush over and over again. We all excuse and explain to ourselves that you have to keep trying new ones just in case the latest purchase becomes the chosen one. 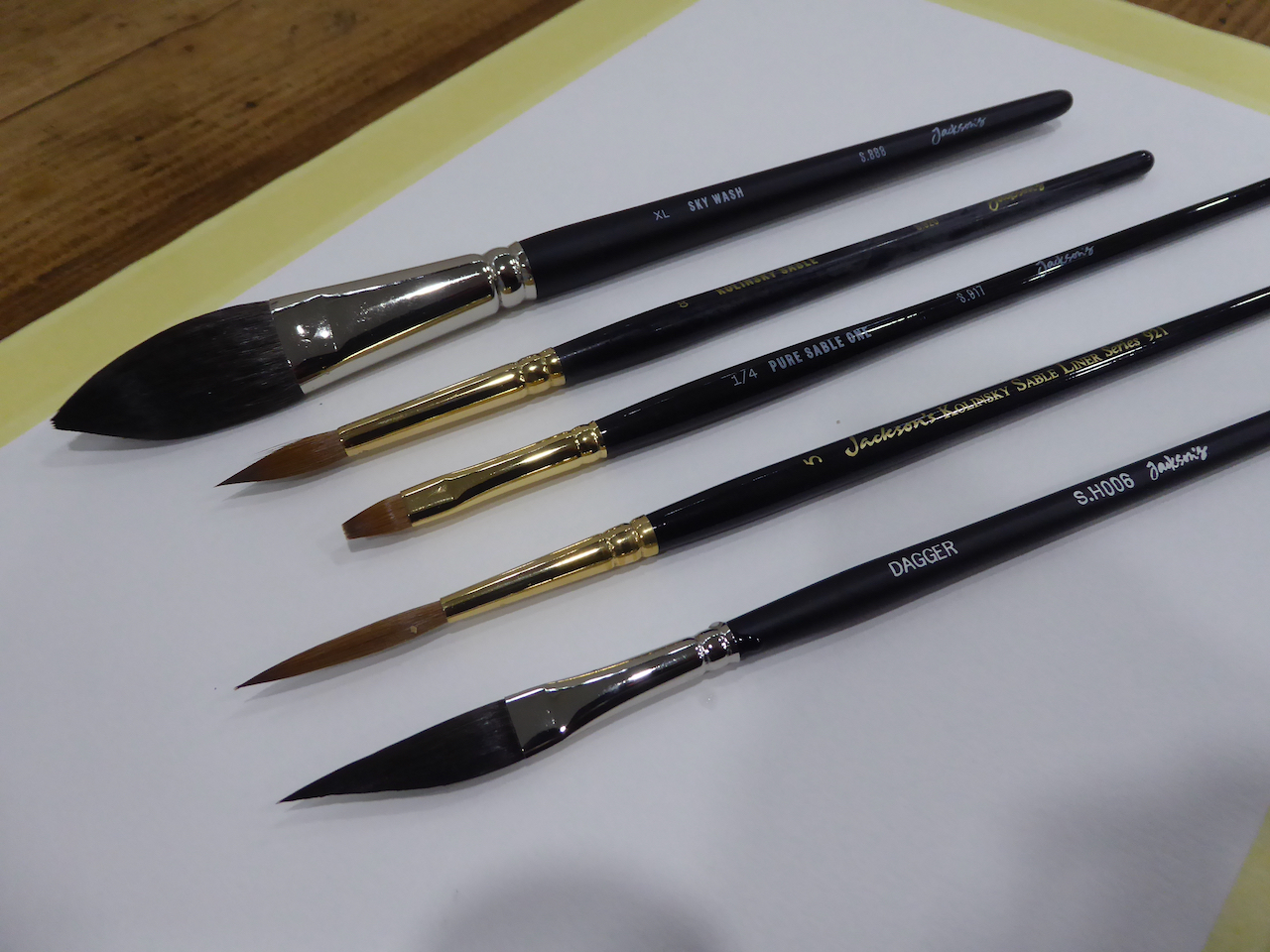 When working on smaller watercolours I normally paint en plein air and have found Daler Rowney Langton Cold Pressed Watercolour Board ideal for breezy outdoor painting. It provides enough texture and absorbency while being convenient to carry around. On this occasion and for ease, I tested some new Jackson’s brushes in the studio by painting a beautiful stand of beech trees I had recently seen in a Yorkshire ravine. After masking the edges of the board, I wet all of the paper with an Jackson’s Squirrel XL Sky Wash brush, which held plenty of water and immediately felt like it would be useful on larger pieces of work. I then added light washes of diluted black Indian ink together with Winsor and Newton Payne’s Gray and Yellow Ochre to create a backdrop of the lightest and most distant areas of the valley. 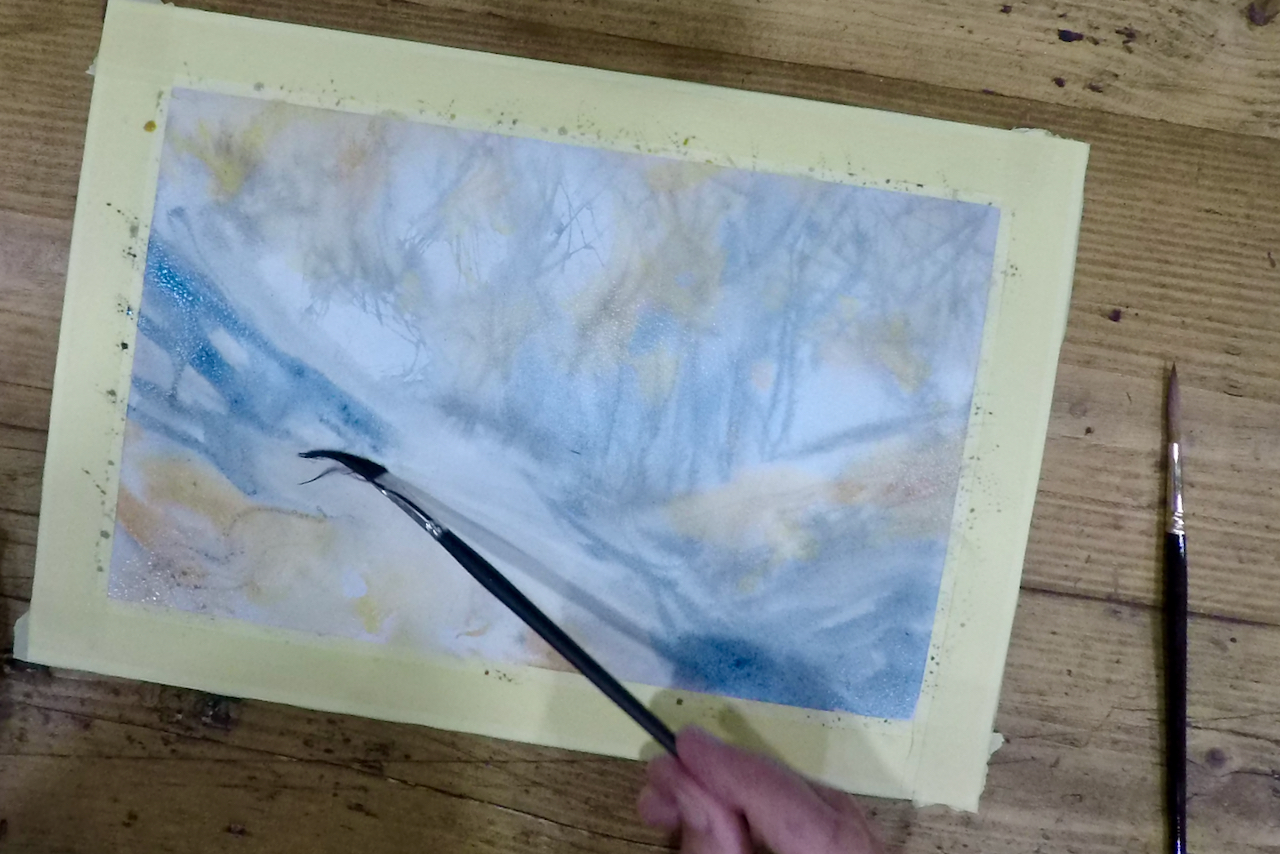 To paint in the verticals and branches of the beech trees I used the Dagger Brush 3/8 in. There it was. The new favourite. We all know that feeling when a brush becomes ‘The Brush’. The squirrel hair held just the right amount of paint and maintained a flexibility and flick that felt just right. My only regret with it is that it is a small and delicate brush, fine for working at this scale, but I know I’ll be tempted to use it on larger pieces and I will end up over-working areas with small brush strokes. Who knows, perhaps Jackson’s will produce a larger version in the future. 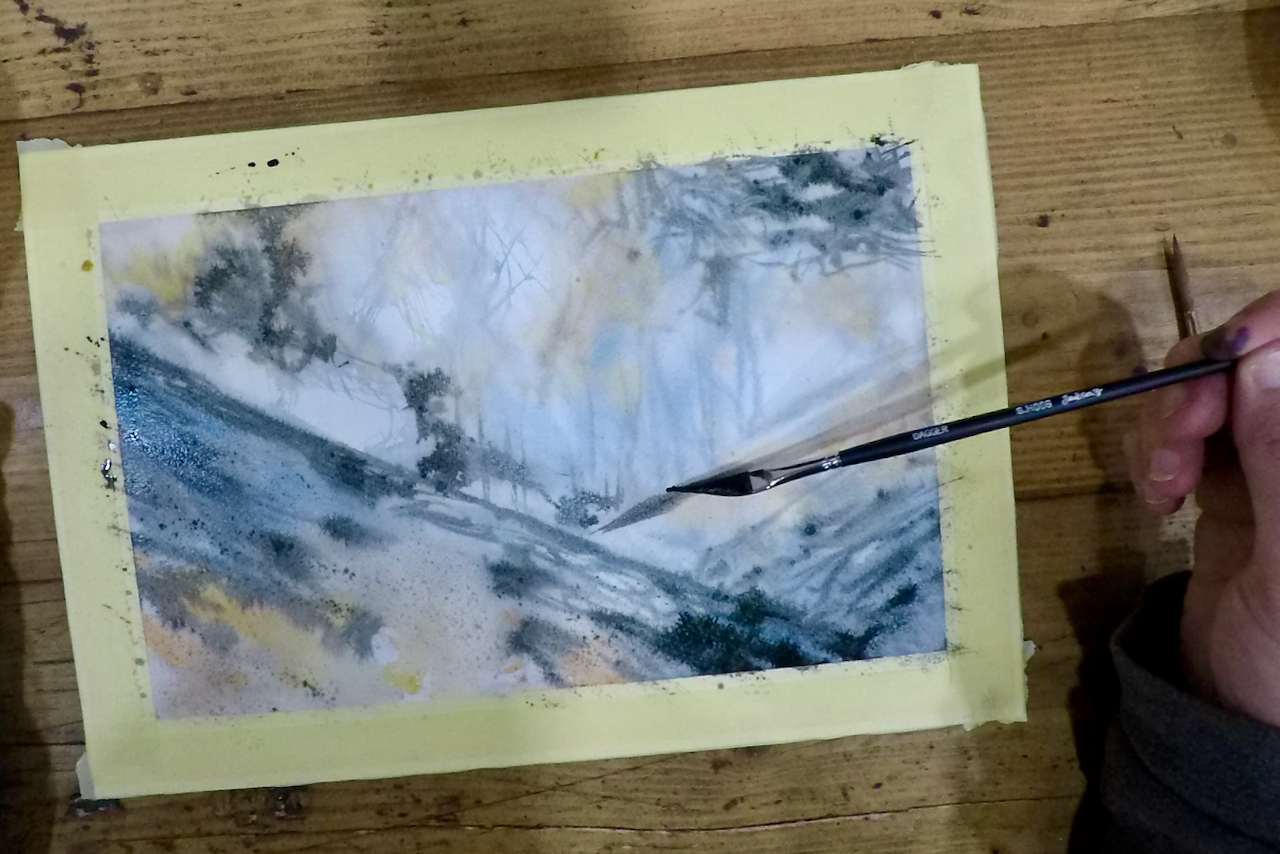 While the paper was still wet I tried the Red Sable Flat Series 917 1/4 in Brush to splatter ink and paint to create random splodges and paint flows. Nothing. The flicked hairs produced a fine mist rather than the drops of ink I was after. But come on, after the Dagger, any brush was going to come second. The Kolinsky Sable Liner Series 921 was struggling against the tough opposition too, but I could feel it would work better on larger watercolours. 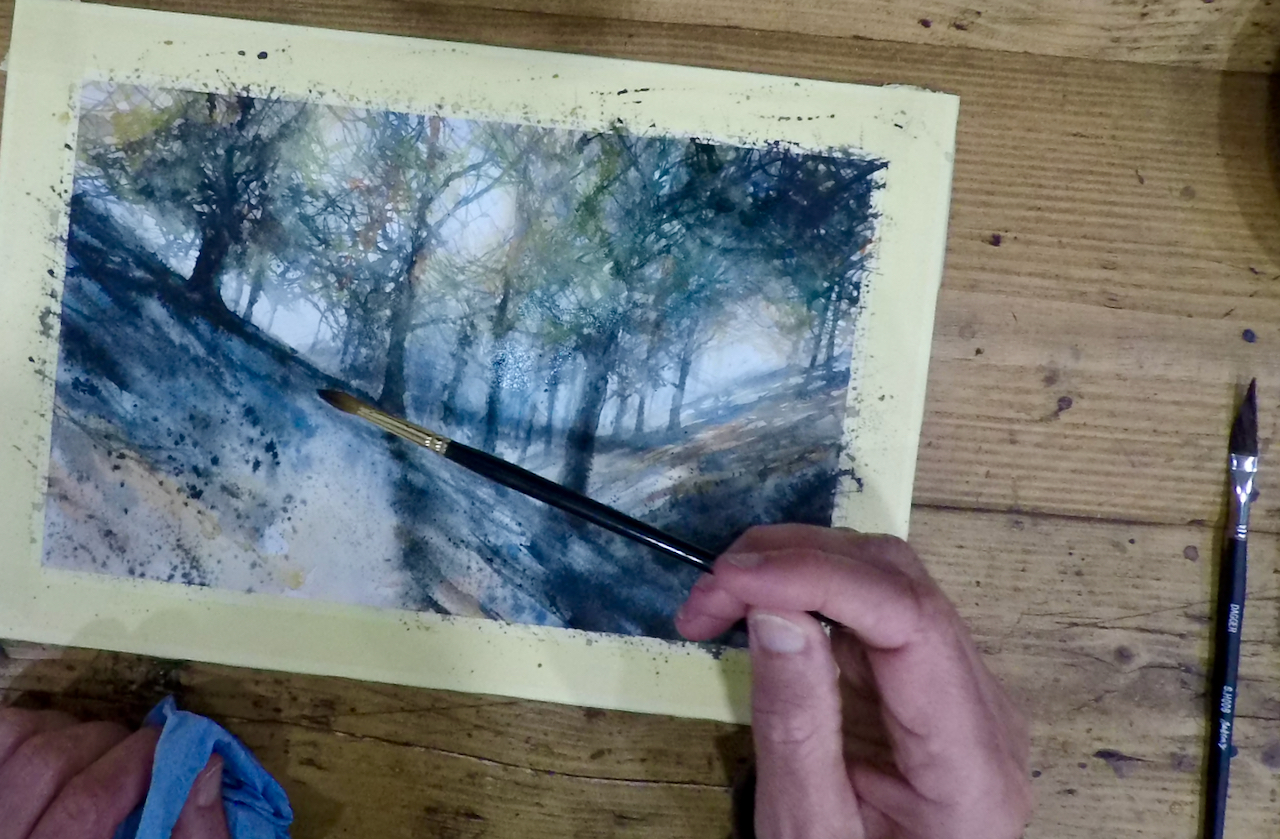 Once the body of the trees were painted in I used both the Sky Wash and Series S.920 Kolinsky Sable size 8 brush to darken areas and increase the contrast between deep shadow and bright light breaking through the trees. When I was happy with the tonal values I treated myself to some clean water and gave the Red Sable Flat Series 917 1/4 in Brush another go to take out some of the paint in the highlight areas. This time the brush performed perfectly. The short stiff hairs were able to get the paint moving again and acted almost like an eraser to create the hazy light-burst effects I was after. 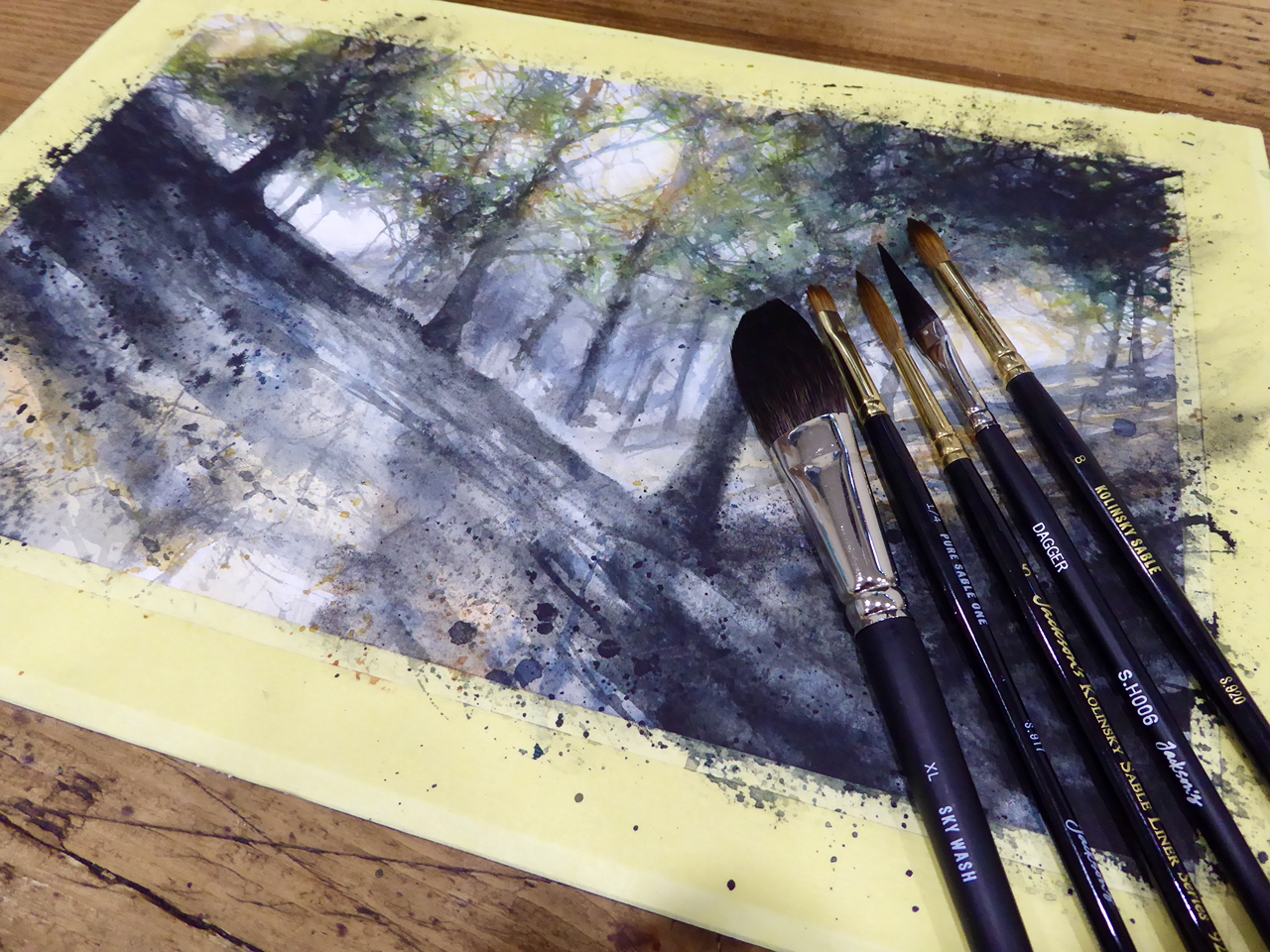 After hair drying the painting I then applied charcoal powder to darken and soften the shadow areas of the ravine. After fixing the charcoal layer I wrote into the background the names of the species that are dependent on beech trees which will all be affected as climate change puts strain on these beautiful but shallow rooted giants. 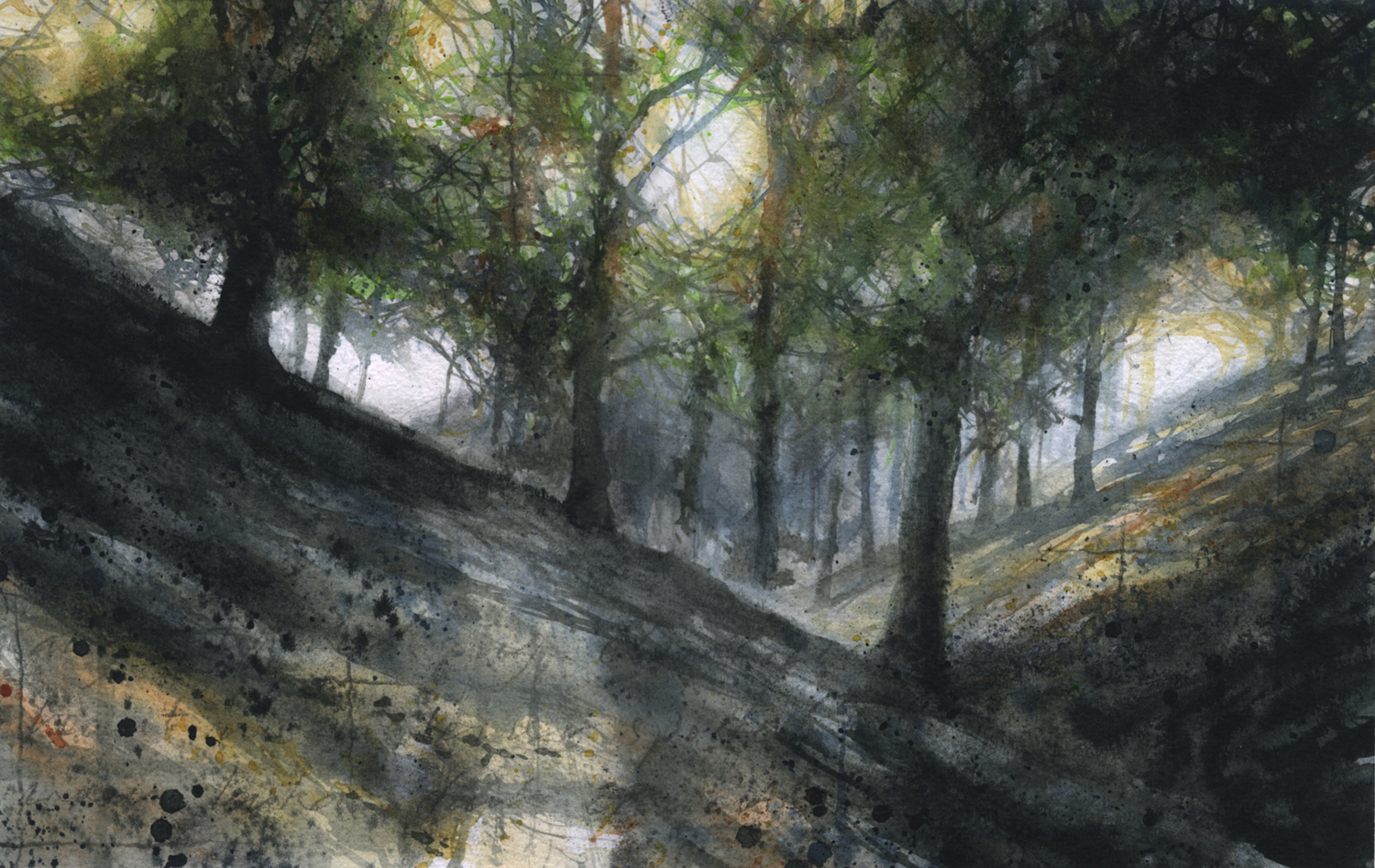 Watch a time-lapse video of Gary’s work in progress below:

Gary Cook RI SGFA is a Dorset-based environmental artist who explores our complicated relationship with and often detrimental impact on nature. The combination of naturalistic painting and narrative script that characterise his watercolours are a direct result of his background in the newspaper industry where he was the senior artist and associate editor for The Sunday Times for 26 years. 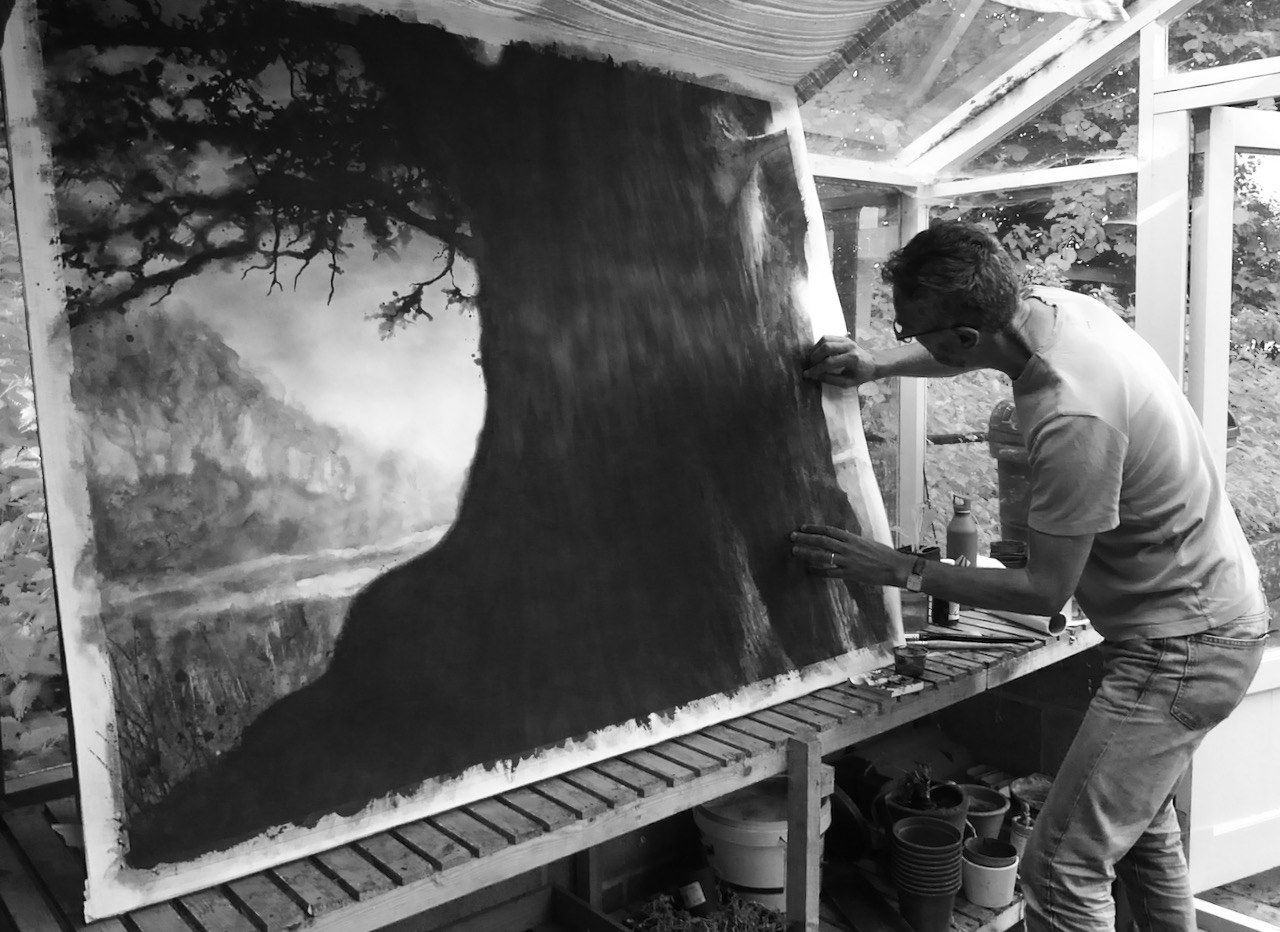 He is a recently-elected member of the Royal Institute of Painters in Water Colour (RI) and the Society of Graphic Fine Arts where he has twice won the Best in Show award. He also writes for Resurgence and The Ecologist. He is represented by The Art Stable in Blandford, John Davies Gallery in Moreton-in-Marsh, Kevis House Gallery in Petworth and Sea Pictures Gallery in Clare, Suffolk.

Use or search the Instagram tag #jacksonsmaterials to see more.