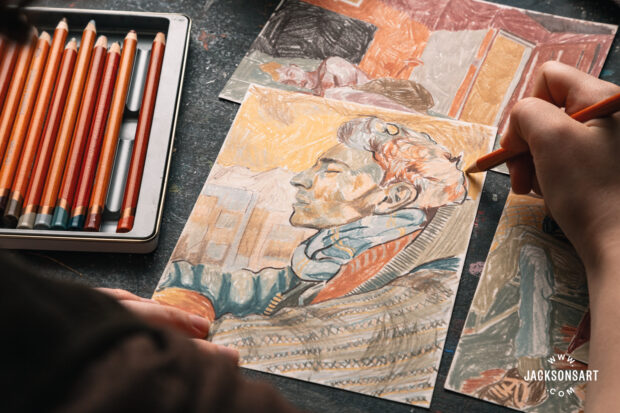 Inside the Sketchbook of Kayoon Anderson

Kayoon Anderson is a figurative painter and Semi-finalist in the Sky Arts Portrait Artist of the Year. Here she contemplates the importance of her sketchbook practice as a tool for developing ideas and trying new techniques, while also pondering the evolving relationship an artist can have to their sketchbooks. 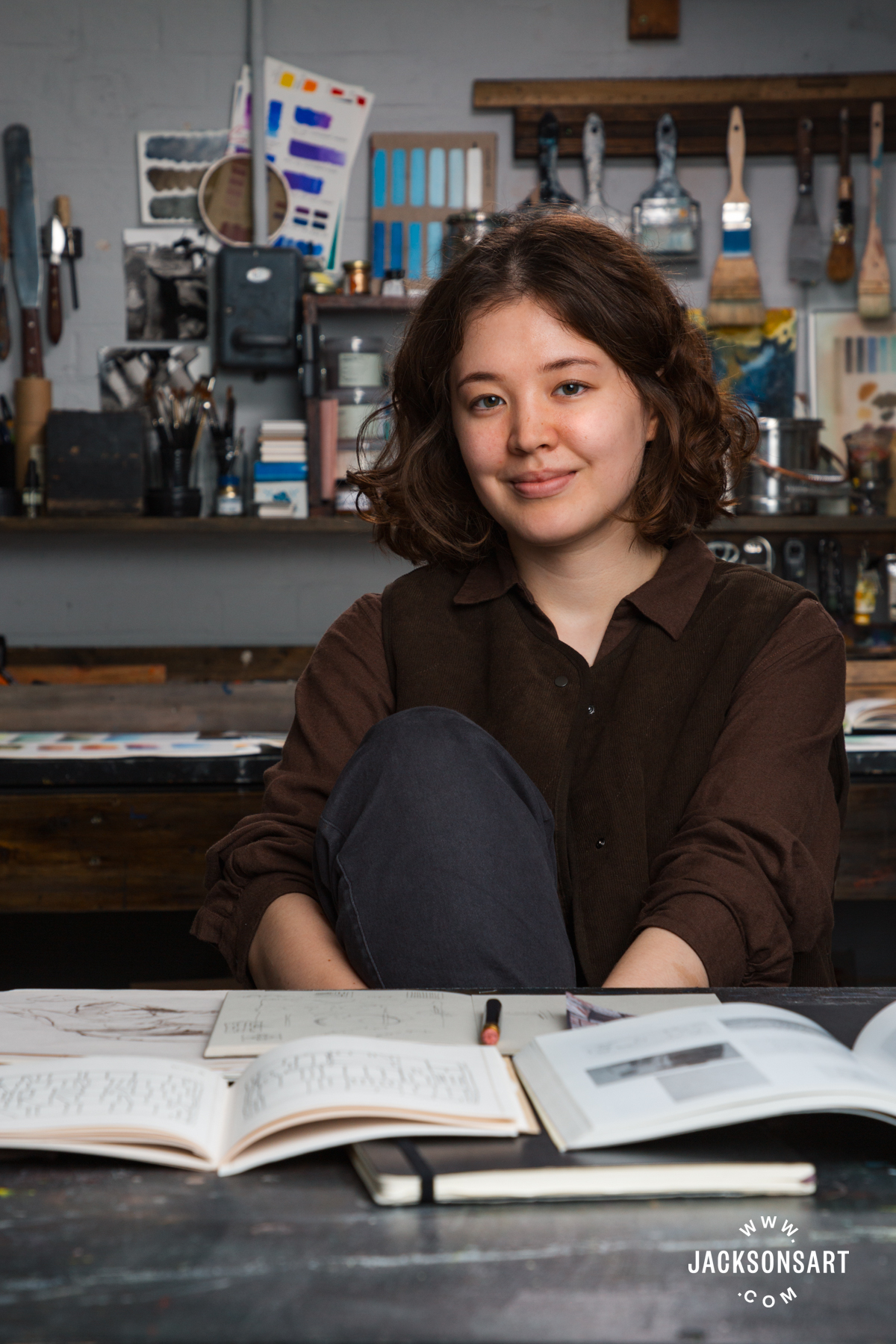 Kayoon Anderson Takes Us Through Her Sketchbook Practice

To be honest, keeping a sketchbook has often felt like a bit of a chore. It’s something I’ve been told time and time again is important to do, but I can never remember to carry one with me.

However, I’m currently going through a period of painting-planning (rather than painting-doing), and I’m realising that it can be pretty helpful after all. My sketchbooks have become a space for me to visualise my thoughts through line and test my hand at different ideas at the pre-painting stage.

My preparation process can be broken down into several stages:

I paint figures, and sketching from life helps grow my understanding of the human form. Even if the end goal isn’t to paint people naturalistically, I still want their bodies to be believable. Sketching from life is often fast, and the focus is on training myself to capture form accurately. 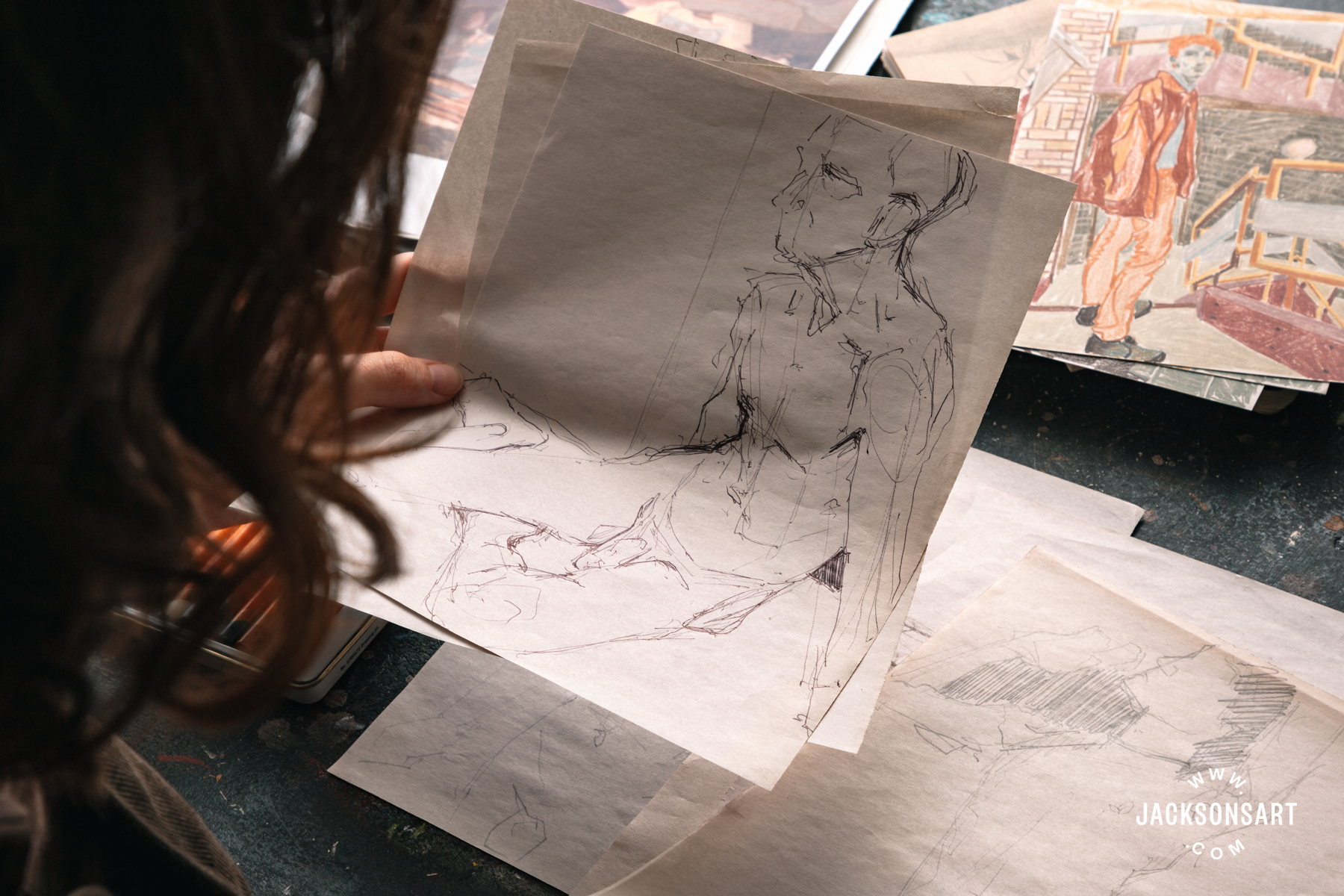 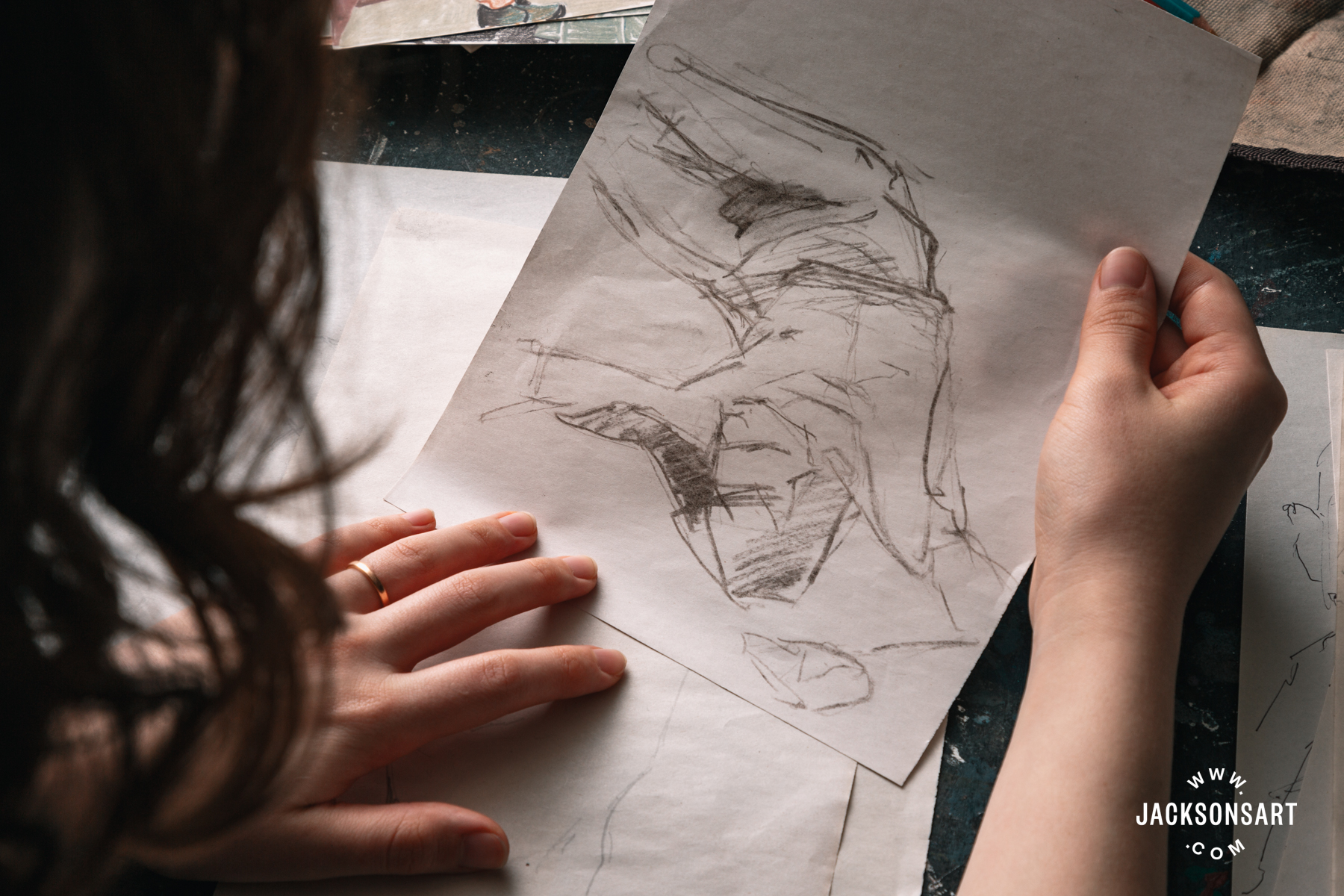 Looking at Other Artists Work

I recently came across the work of the 20th century Korean painter Park Su-Geun and was completely blown away by the simple rendering of forms, their calming quality, and the overall stability of the works. I wanted to understand how he achieved these emotions and felt the most direct way to study them was to sketch them. 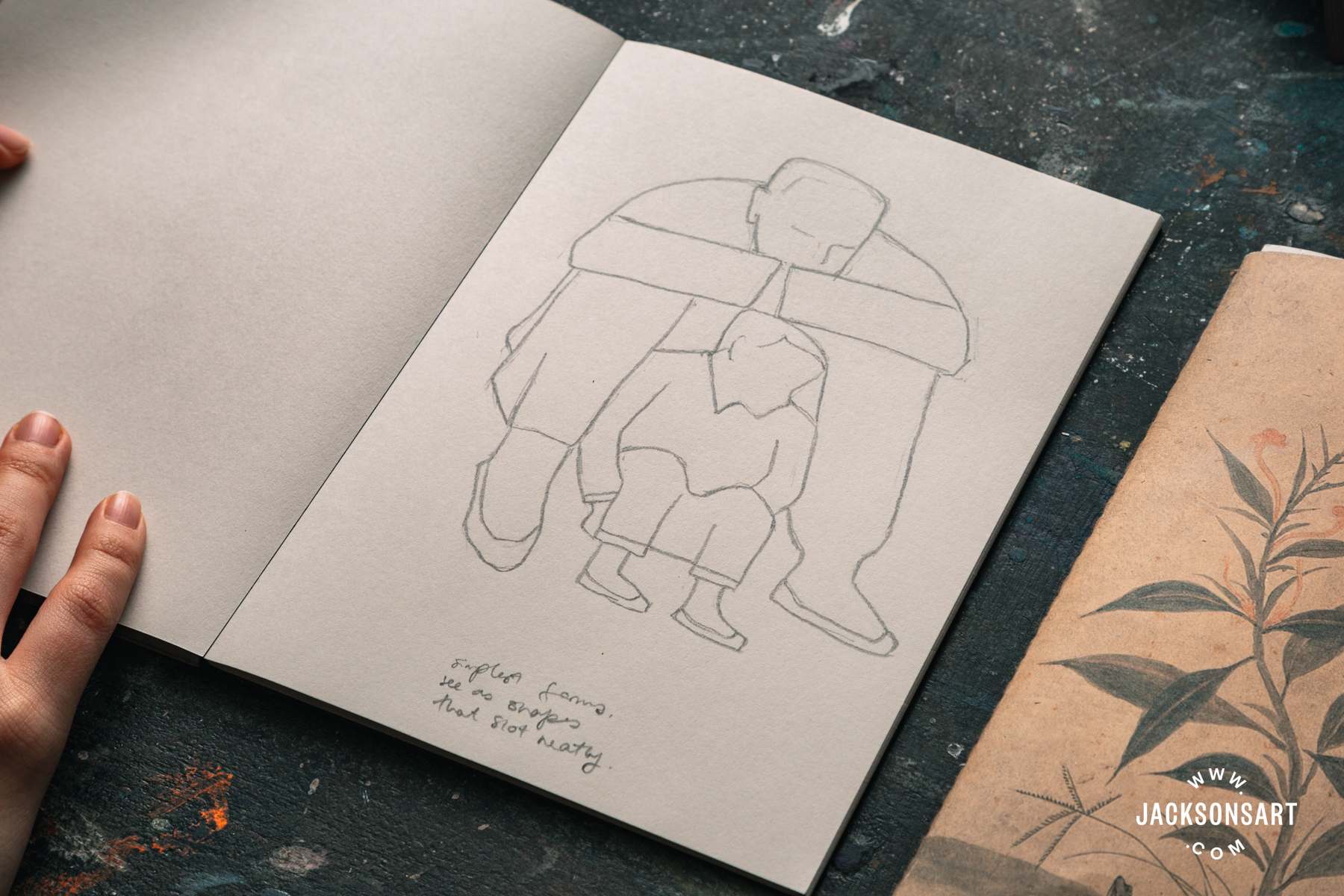 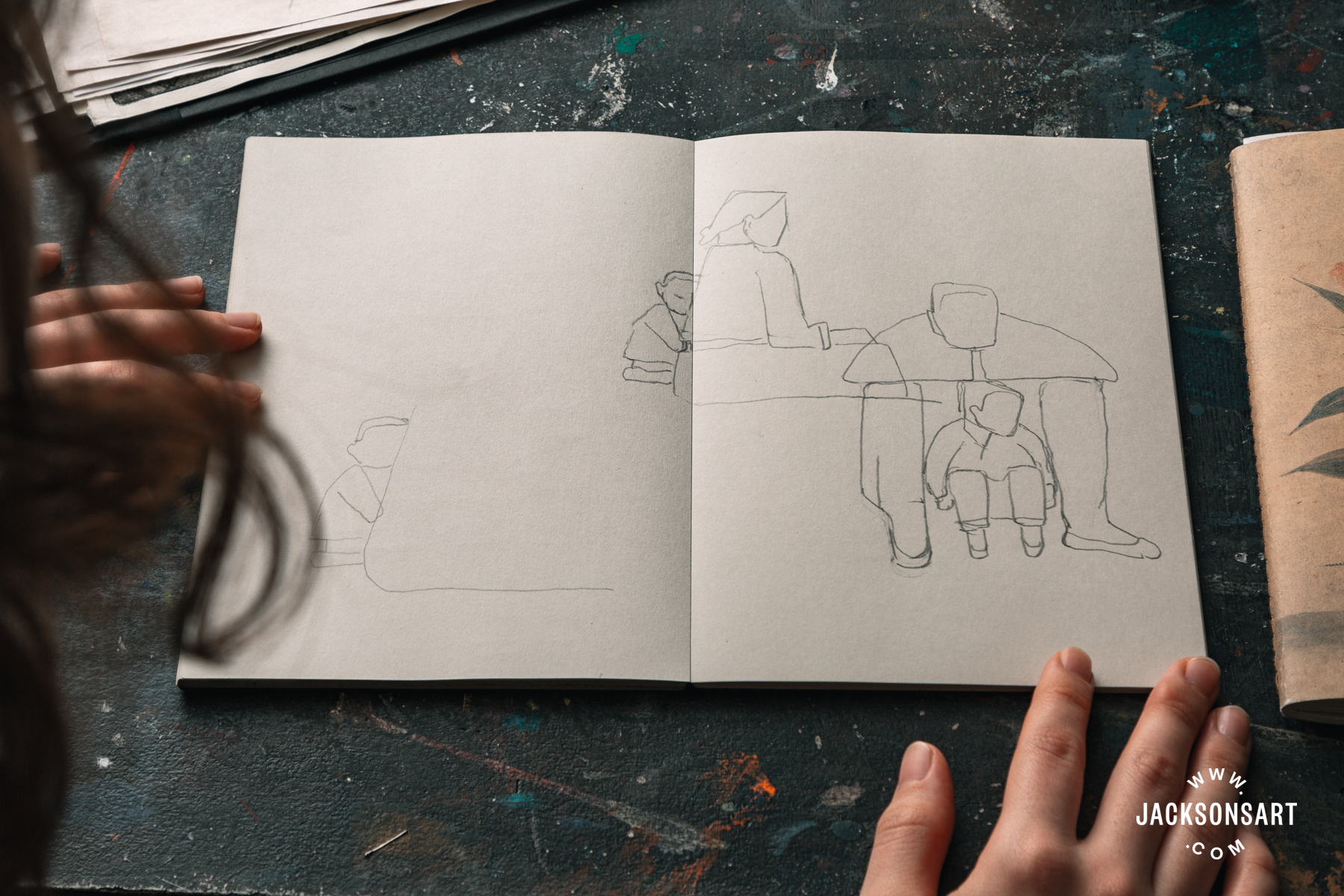 I keep albums of photos on my phone, in folders such as ‘painting inspo’, ‘interiors’, ‘colour inspo’ and ‘pattern’. Every now and then, something comes up that I’d like to incorporate into a painting, and the process of sketching helps me get a feel for it. These could be photos of people or spaces, but mostly it’s patterns that I’ve come across. For example, I’ve been familiarising myself with the patterns in the doors of traditional Korean hanok buildings. Lately I’ve also been fascinated by the designs of Korean bojagi – traditional embroidered wrapping cloths made from a patchwork of scrap fabrics. Like the doors of hanok houses, they are combinations of horizontals and verticals that create beautifully harmonious patterns. I’ve been testing out my own bojagi designs in a sketchbook. 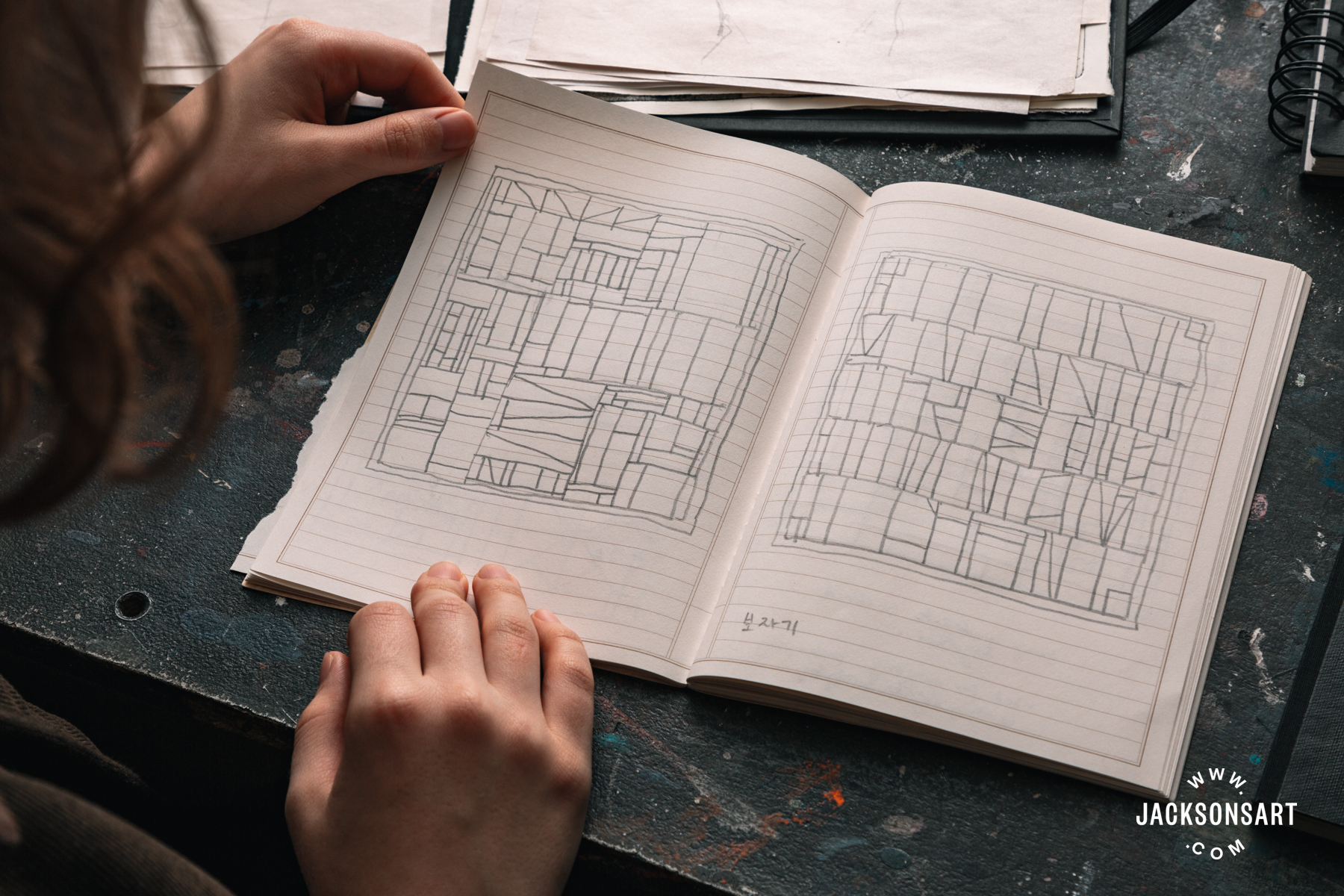 All in all, the sketchbook is a place for me to lay out and play around with all these little thoughts in simple line, seeing what I gravitate towards most, and start forming basic compositional drawings for paintings. Tracing paper is wonderful for this – I can draw something on the page, overlay pattern using tracing paper, and experiment with where the image edges should be, all on different layers. 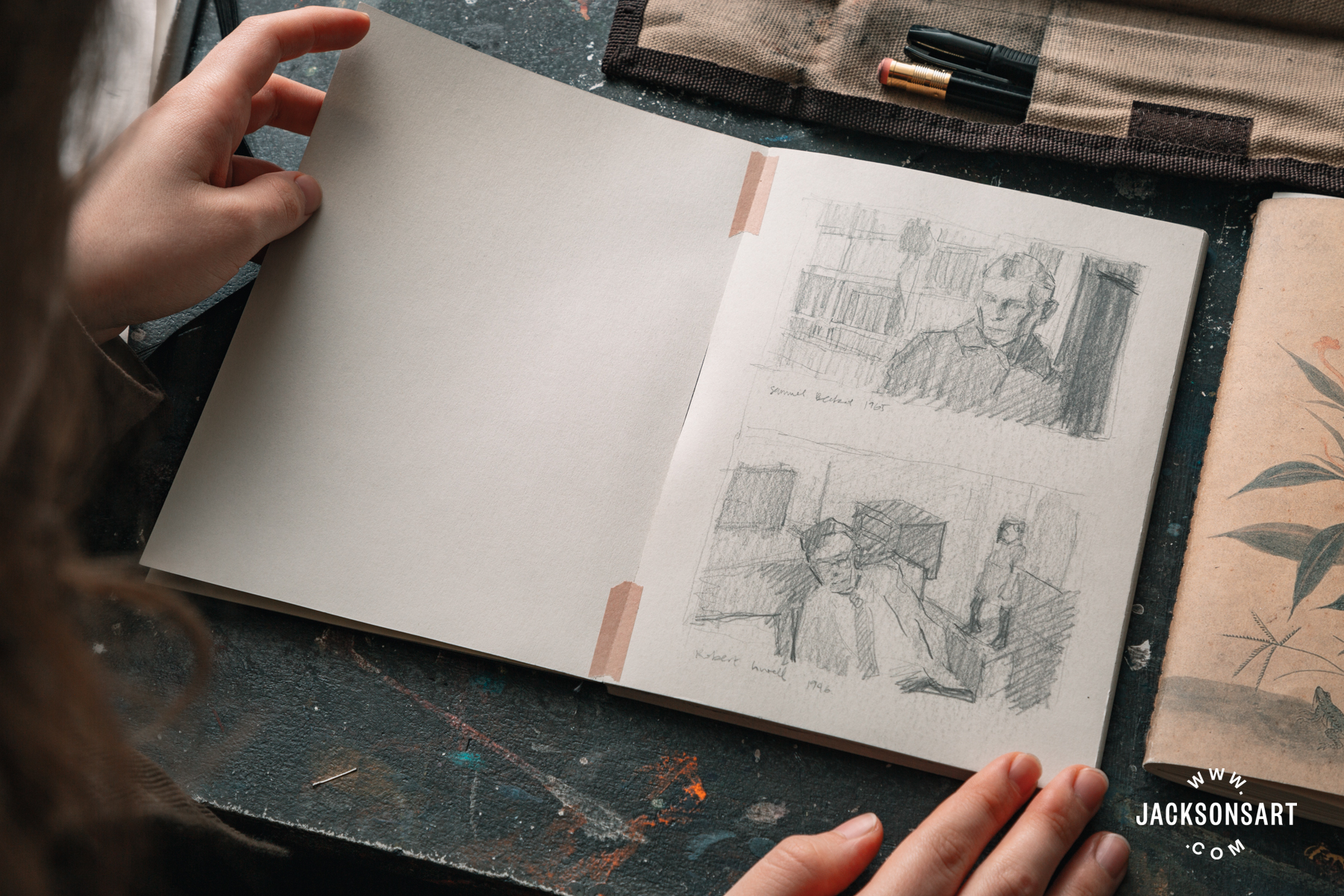 For the next stage of composition however, I use digital tools such as Photoshop. I’ll scan drawings of figures and patterns from the sketchbook and combine them along with flat shapes drawn in Photoshop to create a more complete composition. At the end, I am left with ‘the image’ (sometimes also coloured on Photoshop) on which my painting is based. This process is arguably the most important part of my painting preparation, transforming the early concepts from my sketchbook into a useable reference image for painting. It is a way to whittle down lots of images from multiple sources until I arrive at ‘the image’ to paint with. 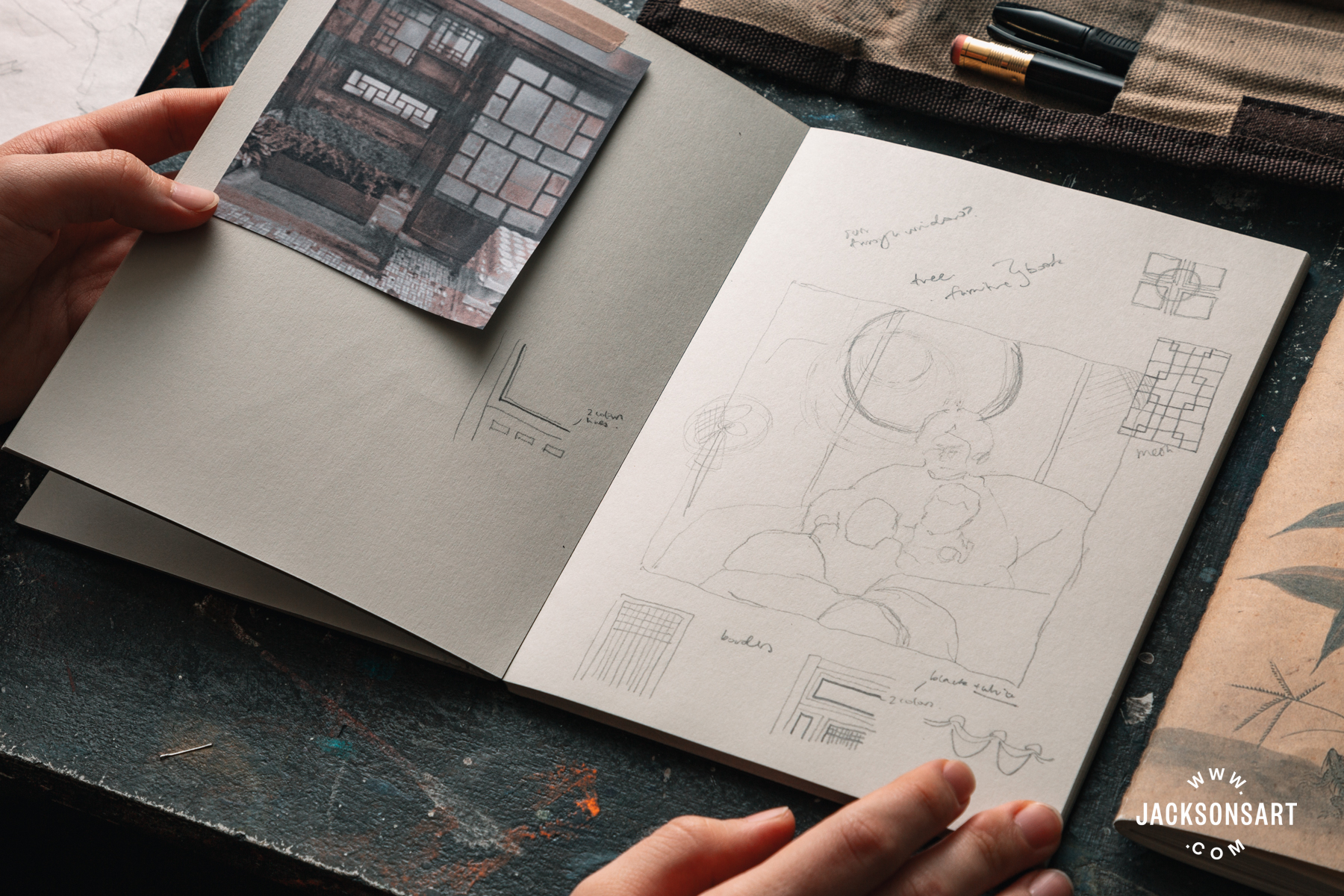 On occasion, I skip the whole sketchbook process and jump straight into Photoshop, digitally collaging photos instead. It depends on the demands of the final painting – sometimes it requires a drawn-out sketchbook development period, and sometimes it comes together in half an hour on the computer and that’s that. 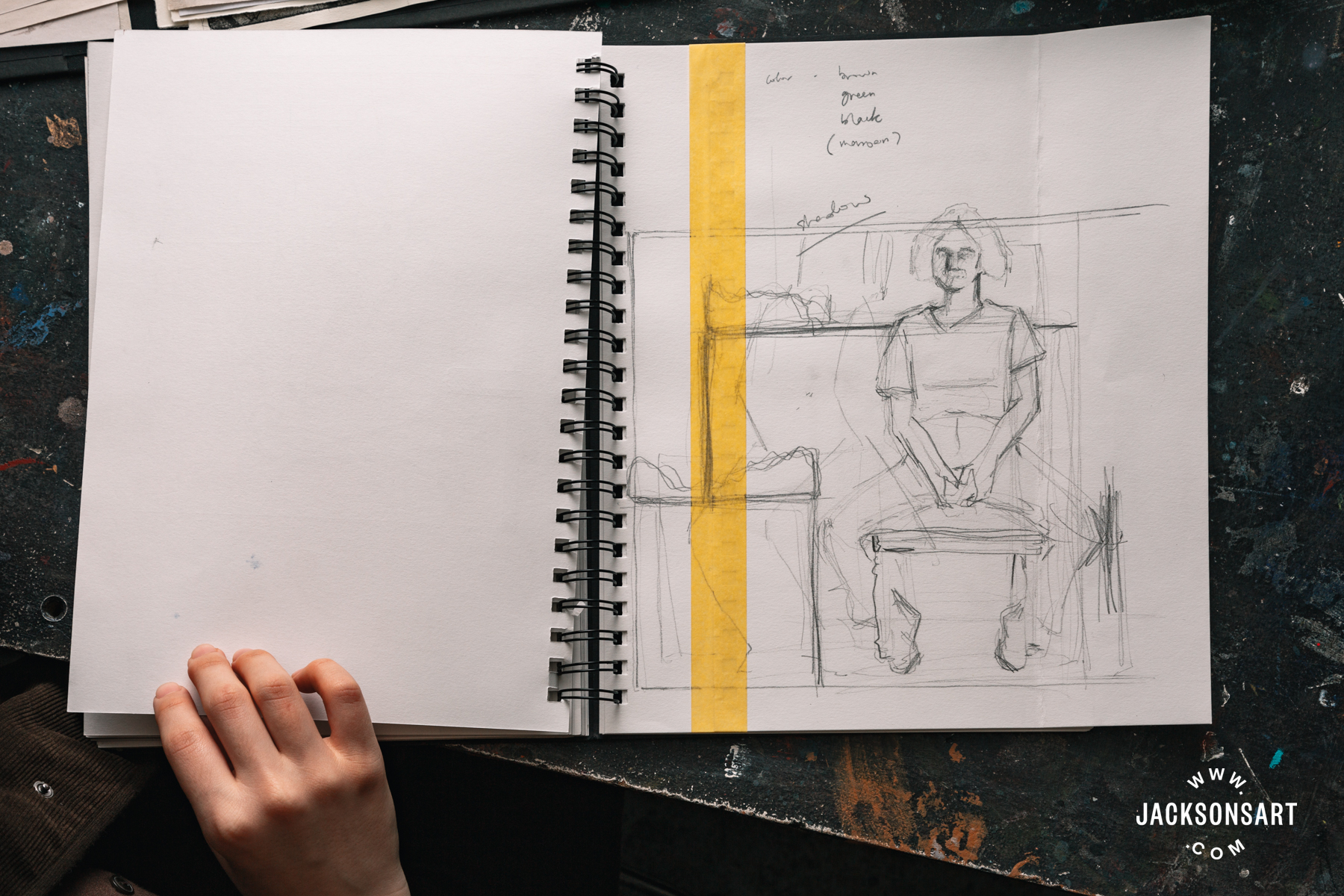 I have a few sketchbooks dotted around my studio and home. All are started but only one is finished. There is no chronology or logic to them – I’ll find one that I started years ago and continue its pages. They also vary in look – plain, lined, small or big. Most of my sketchbooks have been bought on holiday (perhaps because I always forget to take one with me when I travel) and end up being filled in a long time after. My current sketchbooks are from Korea and Italy. 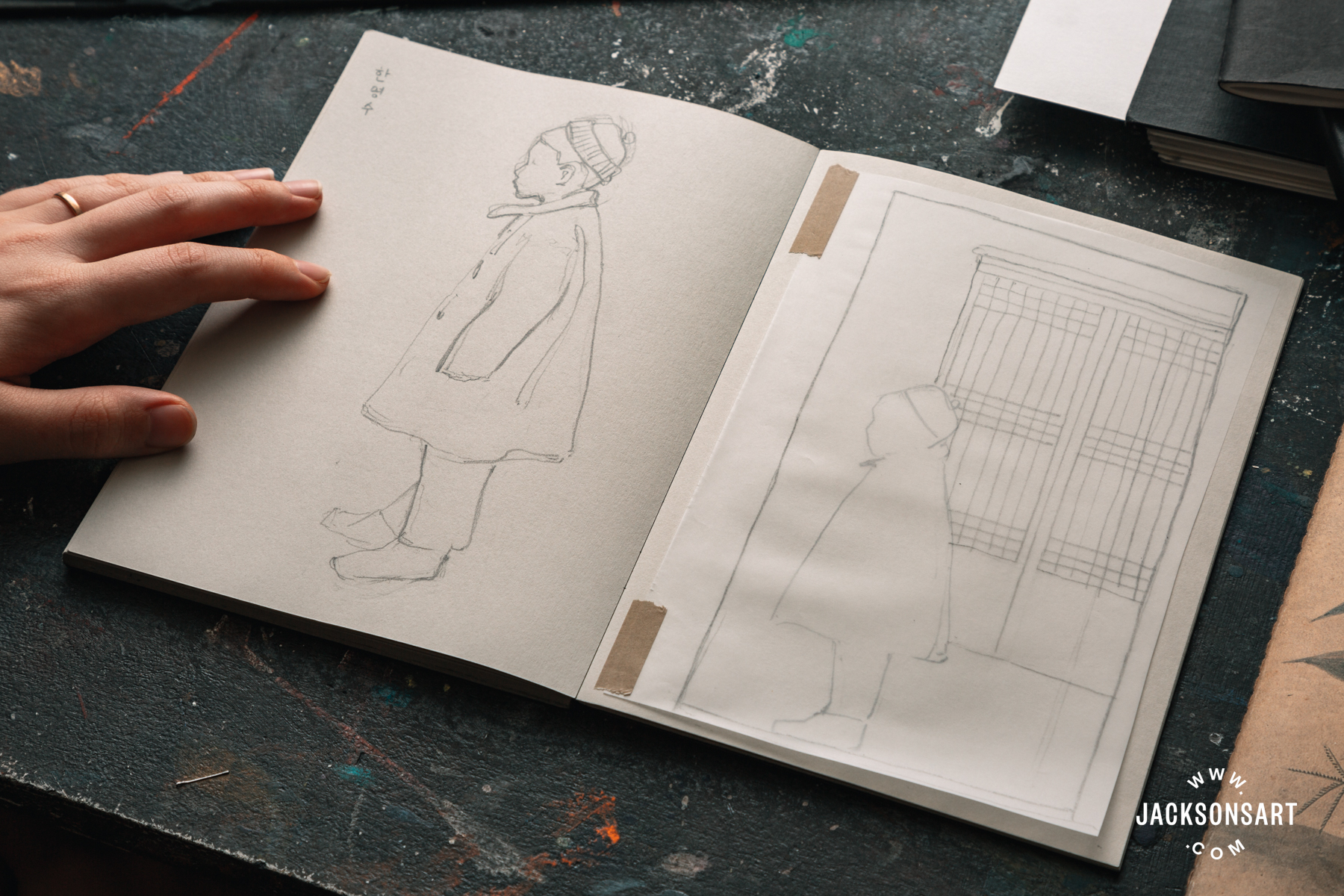 I try not to place too much importance on them as objects… they’re not polished things but just a space to quickly visualise thoughts that inform later works. When studying architecture, the process of sketching was taught as an essential method of ideating and quickly communicating. Whilst I think the importance of sketching can be overstated, it no doubt has a different meaning and importance to different artists. 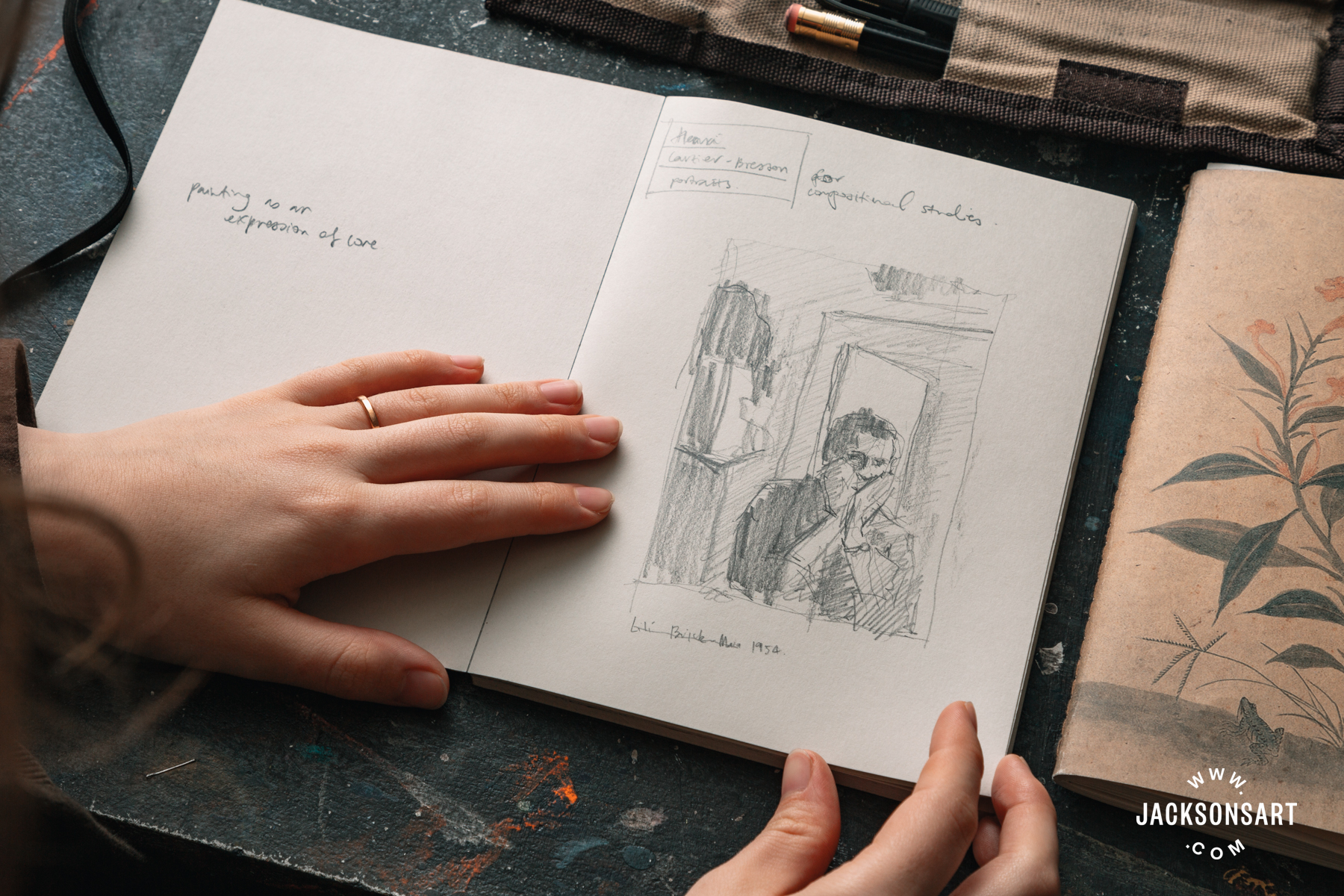 Often months go by without sketching, but you just know that one night when you can’t sleep, an idea for a painting will spark in your head and you urgently have to get it on paper before you forget it. This happened to me the other night so I’m now trying to have a sketchbook at the ready at all times. 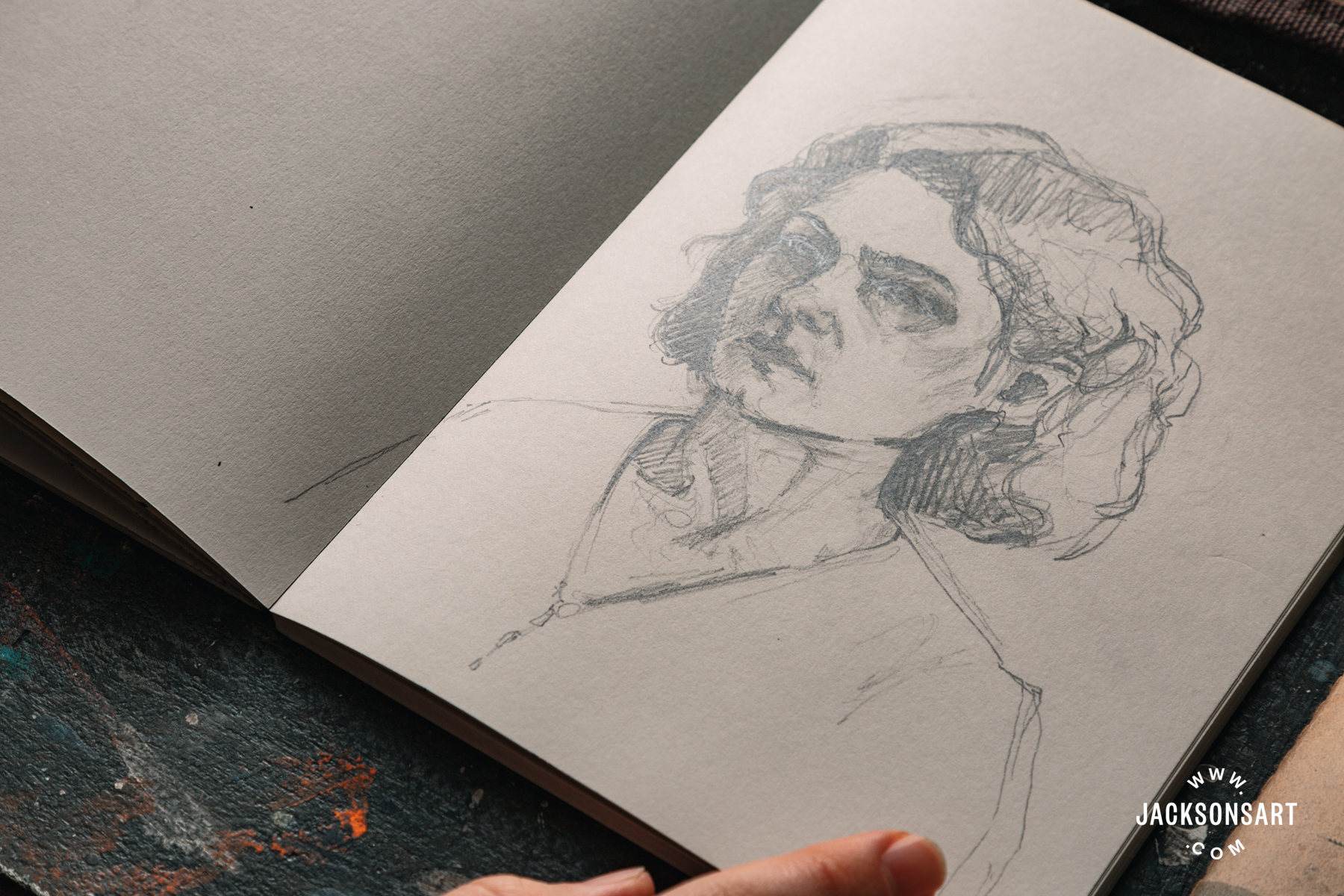 For that same reason, I always have a mechanical pencil nearby too. A mechanical pencil on smooth paper has an immediacy and a cleanness to it which, in my mind, can’t be beaten. Plus, you don’t ever need a pencil sharpener!

Through the process of writing this, I’m realising that my sketchbook practice may be more important to me than I previously gave it credit for. Sketchbooks are often the starting points behind finished paintings. They are a great place to iterate, and sometimes fail, in the pursuit of new concepts. They are the mind-maps in the background that never (normally) get seen. 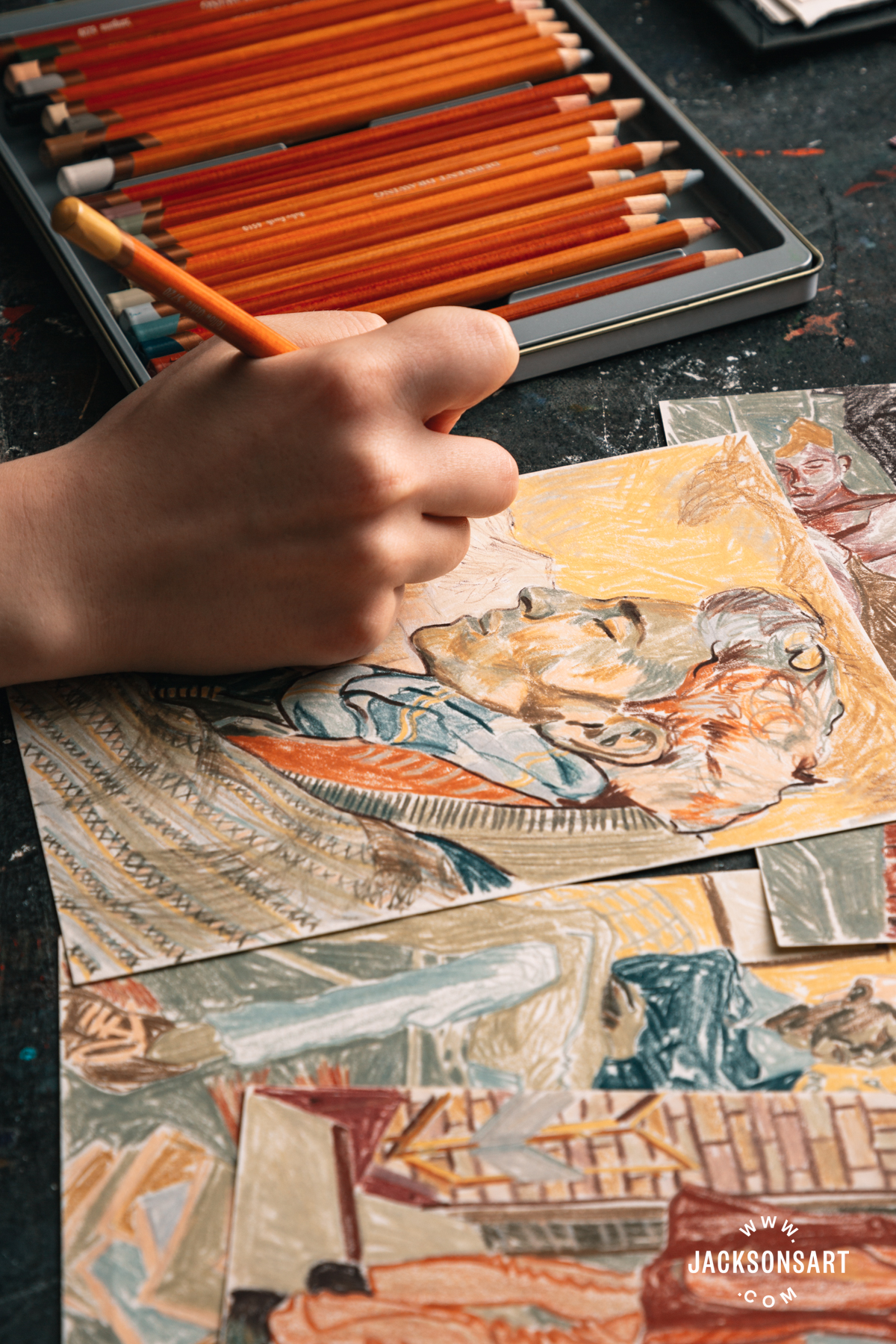 Kayoon was born in Seoul, South Korea in 1997. She studied architecture at the University of Cambridge and portrait painting at Heatherley School of Art. She currently works as a figurative painter in London and looks to Korean art as influences in her practice.

Inside the Sketchbook of Sarah Dyer

The Relationship Between the Artist and Their Materials

Inside the Sketchbook of Jessica Jane Charleston

Developing a Daily Drawing Practice With the Royal Drawing School