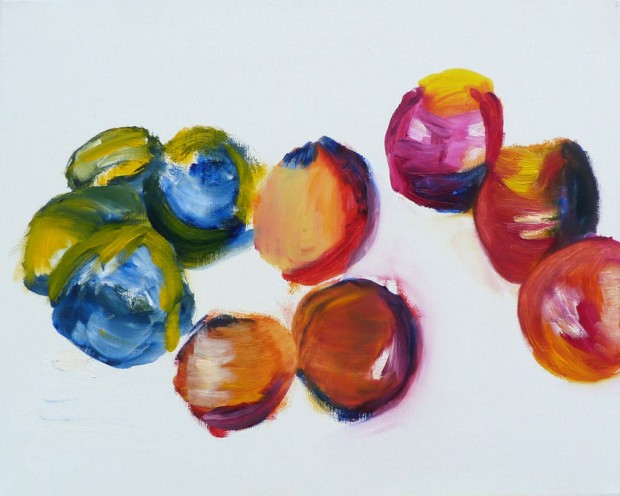 Water Mixable Oils
Artists who wish to paint in oils but are sensitive to solvents often choose to use water soluble oils (also called water mixable and water-miscable). The paint is similar to conventional oils but you can paint without a solvent and best of all you can clean up with just soap and water. There are special painting mediums you can use to mix with the paint instead of water and then only use the water to clean up. The benefit of using the mediums is that the mixture of paint on your palette remains the same for hours as you paint, whereas if you use water to thin the paint it will evaporate on your palette and the paint thickens up during your painting session. I also found that thinning with water looked more like watercolour, didn’t blend because it dries very fast and it dried matte. The different brands of painting mediums work fine with other brands of paint.

Aqua oils dry in two stages: the water evaporates and then what is left is similar to conventional oils and dries by oxidation at a similar rate to conventional oils. Just like conventional oils you still need to remember the fat over lean rule, you still need to let the painting dry completely (often 6 months) before you varnish with regular picture varnish for protection, you cannot mix with acrylic but can paint over acrylic. You can mix aqua oils with regular oils but as you add more you will lose the ability to clean up without solvent.

I recently read a customer review that said they have been painting better since switching to aqua oils. 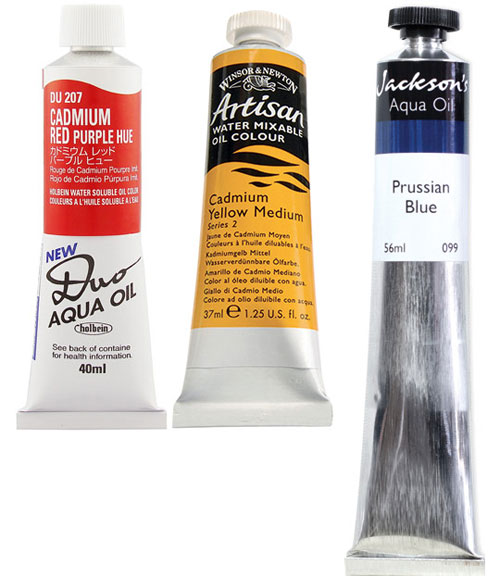 At Jackson’s we stock three makes of artist-quality water miscible oil colour:
(update: since this article was written we have added Cobra and Georgian Watermixable oils to our range, we only do the Georgian in sets at this point in time)

Holbein Duo-Aqua, Winsor & Newton Artisan, and Jackson’s Aqua. Artists sometimes ask how they compare to each other, so I have done some testing. I made two paintings on 24x30cm Belle Arti oil primed linen canvases: one of a row of apples where I did each group of fruit in one of the brands of paint and in the second painting I used the paints all together. 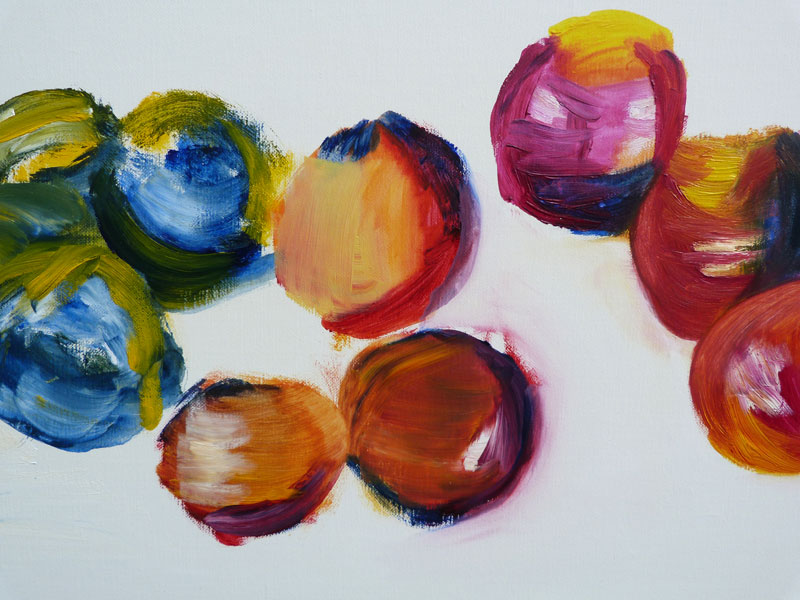 The apples: on the left were painted in Holbein Duo Aqua, the 3 in the middle are Artisan, the 3 on the right are Jackson’s Aqua. Click on the image for a larger close-up.

I had never painted with aqua oils before. I found that using paint straight from the tube is easier with the Jackson’s as it is creamier, the other two needed a bit of water or medium to flow. But more than a drop of water made it look like watercolour and there wasn’t enough pigment to paint with and it stopped acting like an oil colour- it dries so fast it wouldn’t blend. Holbein was a bit pasty in texture, showing white canvas through the brush strokes. The Artisan seemed a bit weaker in pigment strength. I enjoyed the Jackson’s the most (I was surprised), maybe because it was already creamy without adding water or medium and the colours were sumptuous. 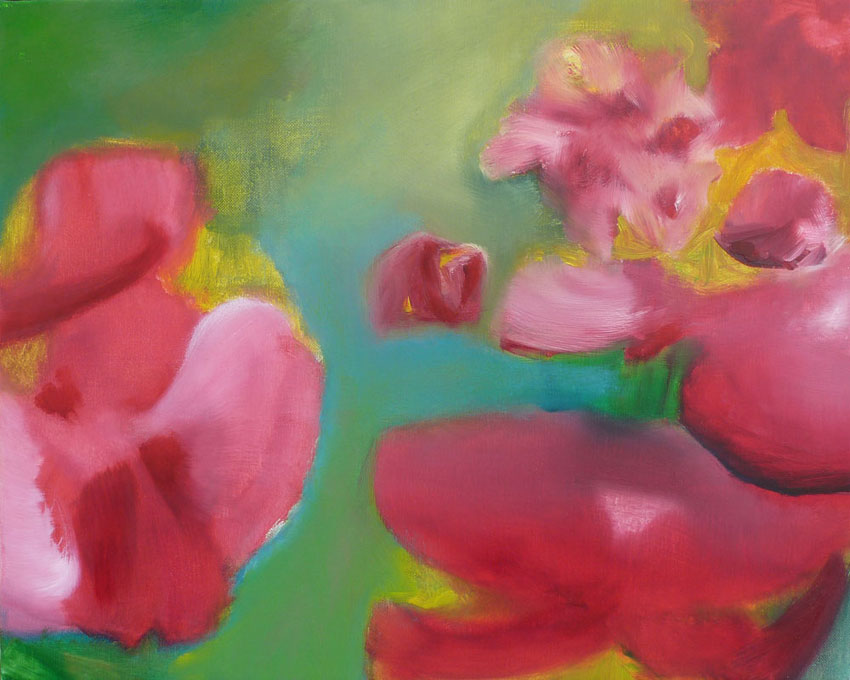 A test painting in a very blended, softened style, using all 3 aqua oils together. Click on the image for a larger close-up. 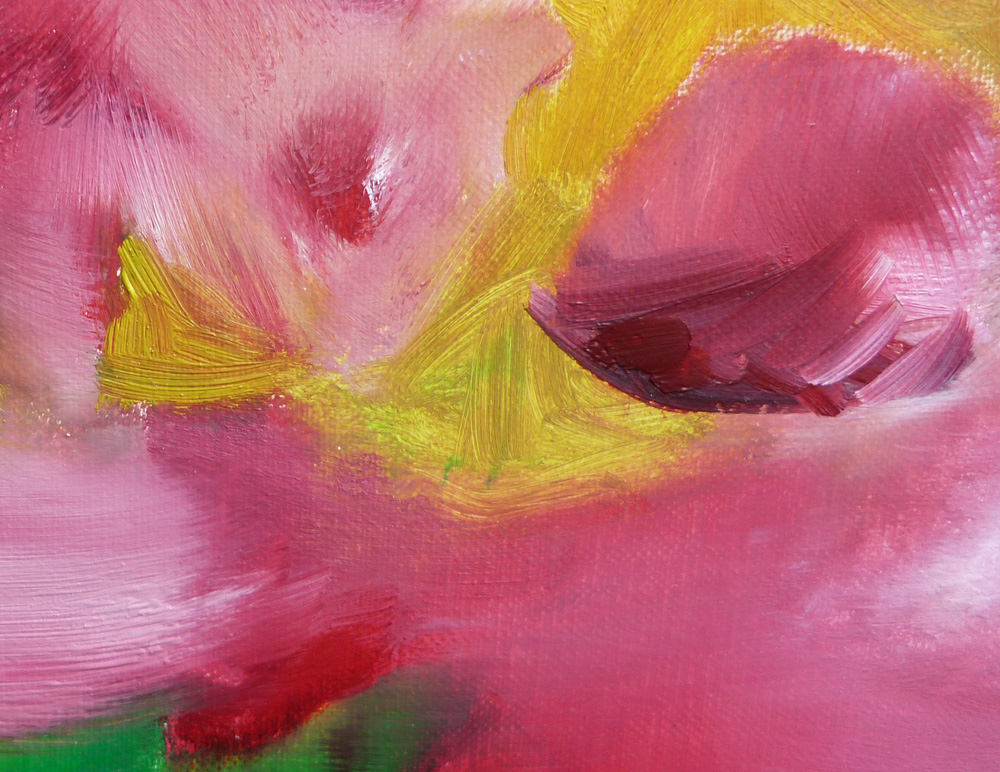 A close-up detail shot showing the brush strokes and blending. Click on the image for a larger close-up.

The brushes I used were Jackson’s Procryl brushes. Cleaning up was very easy. I used warm water and Master’s Brush Cleaner and it was very quick.

Characteristics of the Makes

Test Chart 1:
After the two paintings I made a chart of the three makes to find out their properties: texture as a thick impasto, strength of colour, how far the paint spreads, how it makes a wash, and how fast it dries. To do this I started with equal size spots of paint- I left the first spot, I pulled the second spot down the canvas with a palette knife to see how far it would spread, I used a small amount of water to brush the third spot of paint out in a wash as far as it would go, and I mixed the fourth spot with 10-20% Winsor & Newton Artisan Fast-Drying Medium and brushed it out as far as it would go. 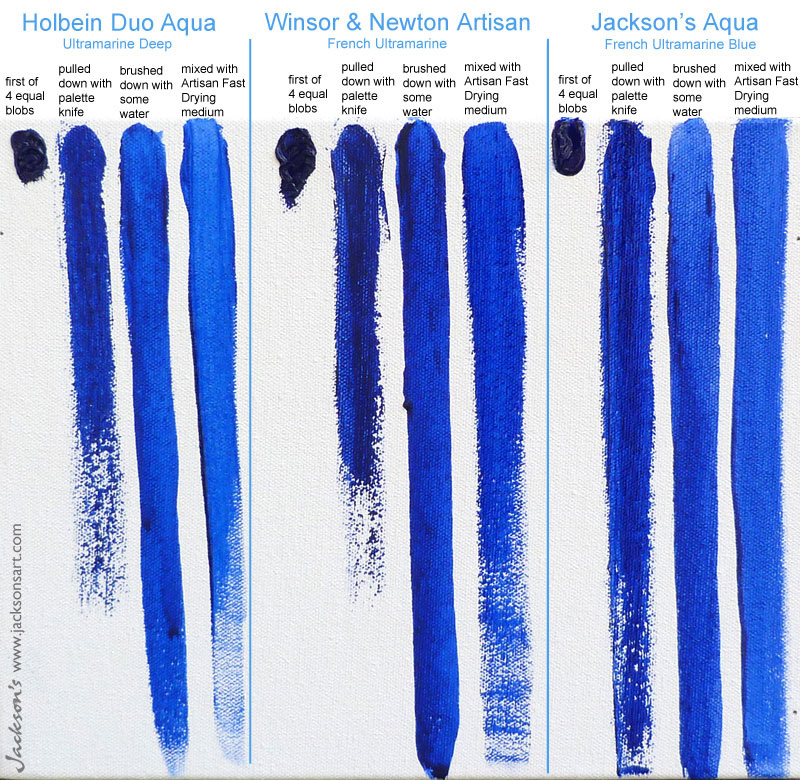 The results-
The texture out of the tube: Holbein and Artisan were about the same, thick & smooth, Jackson’s was a bit separated on the palette and has to be stirred together, then it was creamy and smooth, much softer than the other two. (The Jackson’s Aqua was separated in two of the colours but not in the other colours, the oil mixed back in easily.)
How far the paint spreads: again Holbein and Artisan were about the same, Jackson’s went much further in both a palette knife spread and when mixed with medium. They were all about the same in the water wash.
Colour intensity: they all have a similar good colour intensity in all the different uses.
Drying time: all three were touch-dry in 12 hours in the water wash and with the fast-drying medium. The plain oil took about 3 days to dry. The thick blob took about 5 days with the Jackson’s slightly slower at 6 days. Even when dry the thicker areas felt a little bit tacky or sticky, but no paint came off or moved.

Paint squeezed onto the palette left to right: Holbein Duo Aqua, Winsor &amp; Newton Artisan, Jackson’s Aqua. The Jackson’s separated in this colour, but mixed back together very easily.

Comparing the Makes of Watermixable Oil to Convention Oil

The results-
The conventional oil colour (Blockx) had a more intense colour in the turpentine wash than the aqua oils did in their water washes, but they still compared quite well. 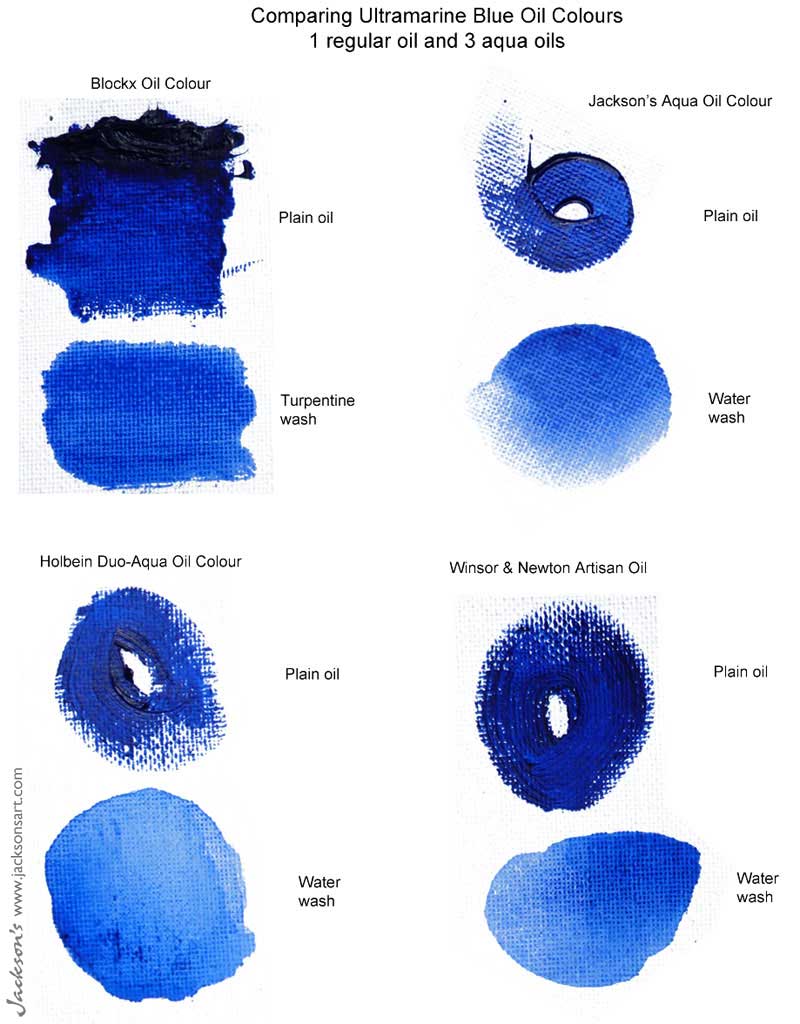 I like the water mixable oils better than I expected. They took some getting used to as any new medium will. I think as I spend more time understanding them they might do things that regular oils won’t, they are a medium unto themselves. Their characteristics change dramatically with small amounts of mediums, including water, and that may be the most important part to practice with. I loved the quick, easy clean-up. I also felt that the creaminess and colour strength made Jackson’s Aqua the winner of the three (even with some of the colours separating and needing to be stirred back together) and this surprised me because it has the lowest price of the three. The Holbein has many more colours in their range so I will probably choose a few of their colours to add to palette as well and the Artisan was a close second performing well in the water wash, so I will also be using some of those colours.
I am glad the brands can all mix together. I will keep painting with the water mixable colours, there is more to learn.

Watermixable Painting Mediums are available in three makes: Holbein, Cobra and Artisan. The Holbein smells like linseed oil whereas the Artisan smells very strong of something like solvent and makes me dizzy, the Cobra is somewhere between the two. The Holbein dries as expected, the Cobra dries a little faster whereas the Artisan was still sticky a few days later. Of those three I would recommend the Holbein wholeheartedly and the Cobra is fine.
I hope this helps. I will do some tests and write a post about the mediums, they are actually very useful, even if it seems like you would only need water for these.

Click on the underlined link to go to the Water Mixable Oils on the Jackson’s Art Supplies website.
As always- standard UK shipping is free with orders of £39 or more and just £3.95 for orders under £39.

Did I forget anything? Leave a comment if you have any questions.