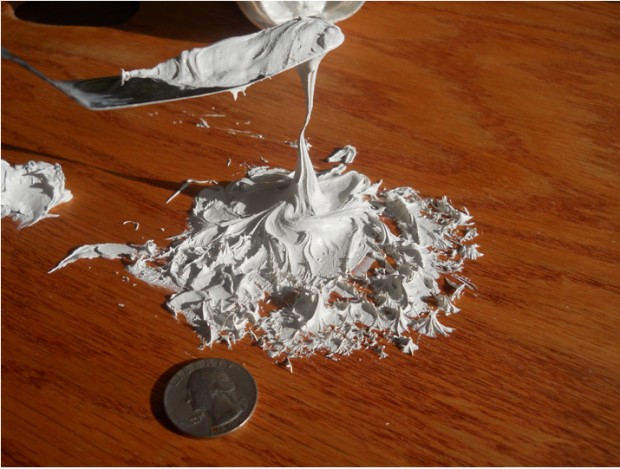 Michael Harding has written some interesting information about his new Lead White oil paint. We thought we would share it with you here.

Imagine for a moment that we are in Rembrandt’s studio. What would we learn, what would we see? Obviously genius in the making! To some he may be on a human scale of a god in his domain. On a more grounded level what can we glean from his studio practices? His materials for me would unlock many secrets to magnificent oil painting.

Artist’s are constantly in search of methods, materials, shortcuts and even some “legitimate tricks” with which to improve ones painting, I think our eyes would dart around Rembrandt’s studio trying to find a clue as to how he produced the extraordinary paint strokes he rendered.
When I study Rembrandts very closely, I examine his brush strokes and I try to imagine what he was thinking, not just about his subject, which was often himself. I feel he knew exactly where and how every dab should be placed. As is so often the case with geniuses they make it look incredibly simple.

Many scholars have noticed there is something different in the nature of Rembrandt’s oil paints, particularly his whites that cannot be simulated with any white today. There are many writings about this and I do not intend to claim to be the first to notice this or to regail you with the same observations. The realities are that the method by which whites, and in this case lead whites, were made has changed. Until the industrial revolution lead whites were made roughly in the same way, suspending lead over vinegar in a container and then burying under horse dung, yes that’s right its not a typo! The chemistry that takes place is well understood and quite simple in broad terms. First, vapors of acetic acid from the vinegar attacks the lead then, the carbonic acid from the warm horse dung converts the white corrosion into lead carbonate. This is a method traced back well before the time of Christ. The Dutch literally scaled up this process and built huge stacks of vinegar, lead and horse dung filled containers, which to this day is still referred to as the ‘old Dutch stack process’. For me to be able to recreate the actual white pigment that would have been familiar to Rembrandt and masters of this pre-industrial process is something of a hunt for the holy grail. I have been researching Rembrandt’s lead whites and the old Dutch stack process for many years. So how does it vary from other man made lead whites?

I believe when nature comes into play, as with snowflakes, every molecule is randomly different, and then every conglomeration of pigment particles on a nano scale is different. With industrially made pigments every particle tends to be uniform, every bit of colour is deliberately made to be consistent. In our modern world we are “trained” to want bright white things, paper, bleached loaves of bread, white chicken meat, bright orange juice and the list goes on. Consistency matters in the modern world for example, imagine frustration if wall papering a wall to find the colour varied from one roll of paper to the next. How many bright white acrylic primed canvases can you see in the art stores around the world? For me this is crazy not only is bright white completely unnecessary it is difficult to paint upon because of the extreme contrast. Most experienced artists start by obliterating this crisp white surface to a more neutral sympathetic hue as a first step.

So, what looks different in the Rembrandt whites? They have a unique texture almost a goopy, syrupy quality. I try and imagine what he was thinking about when painting his paint. Did he like it? Did he have to fight to get it to do what he wanted? I think not. I think he knew exactly how to make his paint behave.

Many artists of the pre-industrial age appear to have been able to throw wonderful passages of white light as if it magically flowed from the brush. An example is the wonderful painting of ‘woman bathing’ in London’s National gallery. (photo 1) Making stack lead white has been a 25-year mission for me. How am I doing it? I start by deliberately hunting the horse fields to gather the freshest horse poop I can. The warm steaming type is best, because it’s the most active biologically. I also visit the horse dung piles that are mixed with straw which been cleaned out of the stables by the people who lovingly take care of these generous animals. Straw is a good addition because it helps aerate the mixture. I then take strips of roofing lead cut it to strips, 6 inches by 24, and roll it in a spiral and then place this in a small clay container over a small amount of vinegar settled at the bottom. I then bury the pots in the horse dung. After a number of weeks magically nature runs its course producing the most beautiful white flakes resembling something more along the lines of the paper one finds in a wasp nest or something made by an insect. The process in itself I find beautiful! This process takes approximately eight weeks depending on time of year and other weather variables.

What does the pigment look like once it is washed of impurities, ground by hand with pestle and mort and then ground in linseed oil? Firstly, the colour is that of a soft gentle non-brilliant white more like the colour of parchment, soft and subtle. The other fascinating observation compared to an industrially made lead white is in the handling quality. When the paint has been left standing and one takes a pallet knife to it and starts to manipulate the paint, at first it is very short and produces only abrupt wisps of paint. Referencing photo 2 below you will see the stack lead white, which has been standing is thick enough to support the weight of the pallet knife. If you manipulate the stack lead white further for a few seconds the paint starts to become what seasoned oil artists refer to as “ropier” and produces long dragged wisps of paint (photo3). It even has what could be described as “flow” for a moment. From a more scientific point of view its whats known as “thixotropic” or put briefly for the lay person a material that become more fluid when agitated or stirred. I am very proud of my stack lead white as it is what I envision Rembrandt to have used as his white oil paint. My output at the moment is very limited due the labor intense process however, I have buried another small mountain of lead which will be ready for harvest at the end of January!

In all these many years I have been painting, which is synonymous for me as studying the art of painting, brushstrokes and paint quality have been essential concerns.

The quality of Rembrandt’s white has always been a source of fascination. As Mr. Michael Harding has already stated, “his whites cannot be simulated with any white commercially manufactured today.”

Try as I might—adding various mediums to my tubes of lead white, as well as grinding my own lead paint—I could never produce a white which would enable me to achieve the paint quality I sought. And now a new door is opened—stack white! This white allows an artist—any artist—long limpid descriptive brushwork, brushstrokes that reveal the workings and understandings of the mind behind the hand. The long supple quality of stack white that allowed Rembrandt the freedom and expressiveness that enthralls us to this day is, at last, at hand.

As with all of Michael’s colours, quality and integrity are in every tube.

You can find Michael Harding’s three Lead White paints: Stack Lead White, Cremnitz White Linseed and Cremnitz White Walnut Oil on the Jackson’s Art Supplies website. Because of safety regulation for lead paints they are supplied in a special cartridge which requires a cartridge gun to dispense, also available on the Jackson’s website.
As always- standard UK shipping is free with orders of £39 or more and just £3.95 for orders under £39.

Julie has been editor of the Jackson's Art Blog for 10 years. With an encyclopaedic knowledge of art materials (majoring in oils and acrylics), she loves researching and writing pieces for the blog as she learns something new each time. Julie is also a professional artist, a recent graduate of the Turps Studio Programme and previously studied at Camberwell.