Fixatives with toluene not allowed in the EU

In the USA one of the most popular fixative sprays is Krylon brand. Because so many artists use it, how-to books often list it as a reliable fixative. So Jackson’s have had a few requests over the years that we stock the product. We have inquired about importing it and found that it is illegal to sell it in the EU because it contains Toluene.

The Krylon representative told us:
“We can only sell aerosols to professional or industrial users within the EU. The below directive bans the sale of aerosols and adhesives containing toluene above 0.1% by weight to the general public. This includes all Krylon aerosol products.
Toluene is banned in glue and spray paint at concentrations above 0.1 % in products for the general public according to Directive 76/769/EEC on certain dangerous substances and preparations (Directive 2005/59/EC of the European Parliament and of the Council of 26 October 2005 amending for the 28th time Council Directive6/769/EEC, OJ L 309, 25.11.2005, p. 13–14). ”

Toluene Toxicology (from Wikipedia)
“Inhalation of toluene in low to moderate levels can cause tiredness, confusion, weakness, drunken-type actions, memory loss, nausea, loss of appetite, and hearing and color vision loss. These symptoms usually disappear when exposure is stopped. Inhaling high levels of toluene in a short time may cause light-headedness, nausea, or sleepiness, unconsciousness – and even death.[23][24] Toluene is, however, much less toxic than benzene, and has, as a consequence, largely replaced it as an aromatic solvent in chemical preparation. The EPA considers that there is inadequate information to assess the carcinogenic potential of toluene.”

Alternatives:
Fixative is a resin in an alcohol base that is sprayed onto a finished artwork to prevent smudging of the material -soft pastel, charcoal and graphite are the most common types of artwork that fixative if used for. The resin coats the surface and the alcohol evaporates quickly. For some artwork, particularly coloured pencil and soft pastel, a light coating of fixative or a ‘workable fixative’ is helpful in between layers to prevent mixing of colour layers or to create a tooth allowing additional layers to be applied. From what I can tell the difference between a ‘final fixative’ and a ‘workable fixative’ is the strength of the resin. It is possible that a very light spray of a final fixative will act as a workable fixative.

Jackson’s stock a wide array of spray fixatives with two that are known as ‘workable fixatives’. 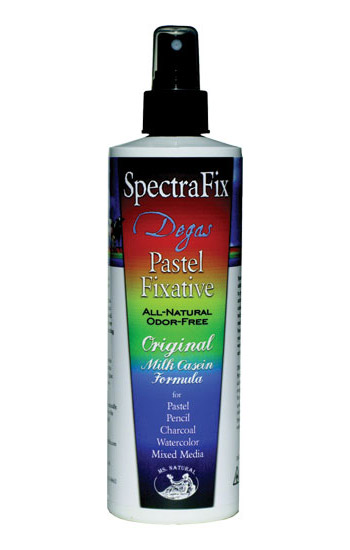 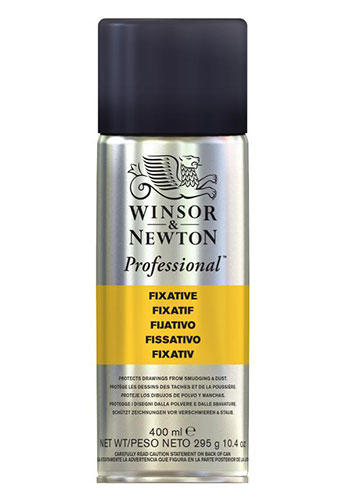