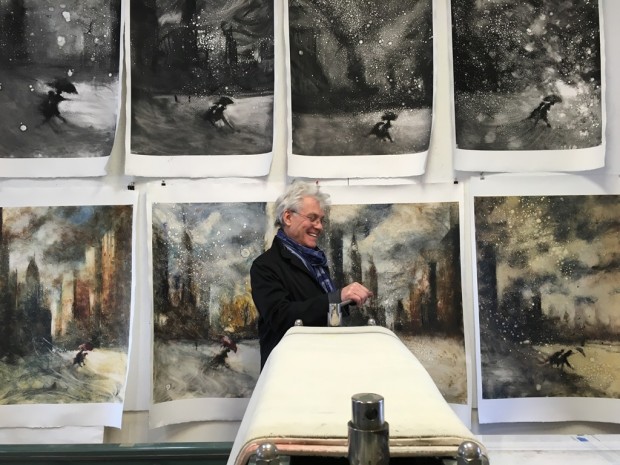 2016 is a busy year for Bill Jacklin R.A. – with 2 books ‘Bill Jacklin Graphics’ (RA Publishers) and ‘Bill Jacklin’s New York’ (Scala Arts) being published, as well as solo shows at Marlborough Fine Art London and the Royal Academy of Arts. We at Jackson’s love his monotype prints which show the medium at its most fresh and exhilarating. 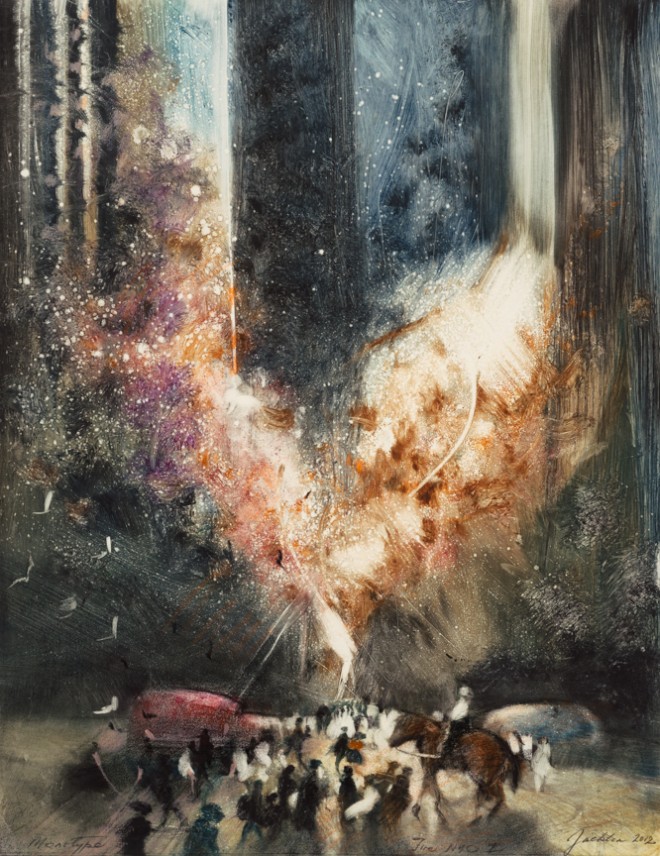 Bill Jacklin’s monotypes are a great example of the idea and technique becoming inseparable. Jacklin’s great inspiration is his hometown of New York City, where he has lived and worked since 1985. Jacklin has said that his work is ‘concerned with the passing of time and my place in it’, and what finer emblem of time passing than the portryal of the the city that never sleeps. 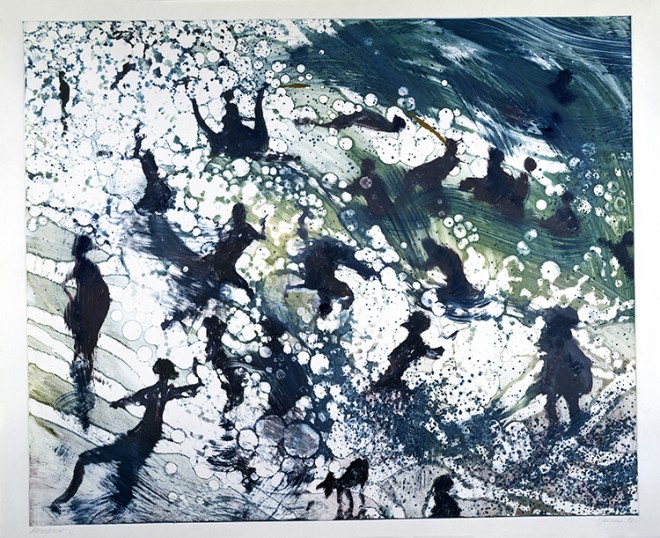 There is an energy to New York that makes you feel like it’s impossible to keep up, and that the city can take you for the journey and exhilarate and inspire with all that it has to offer. Jacklin depicts New York with a lightness of touch, figures almost always in motion, be it strolling through Central Park, running to catch a train, or dancing in the moonlight. He says, “In New York I found a subject on every street corner. The city is a constant I am able to keep returning to as it’s always reinventing itself. I am fascinated by the movement of people in New York and it’s that flux of energy that I paint about”. 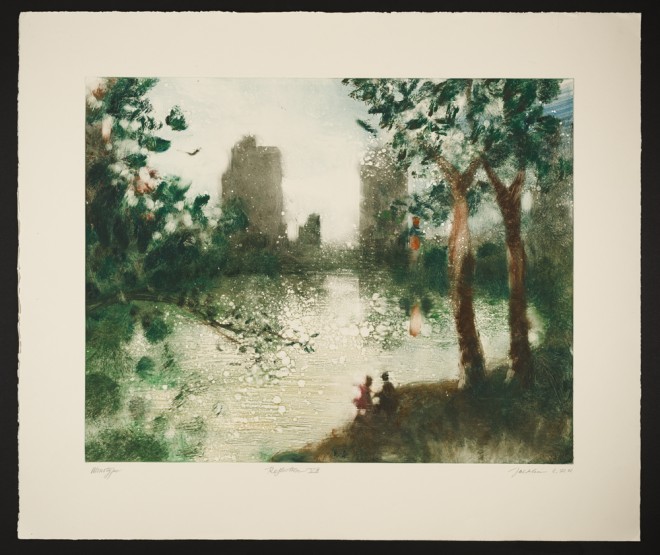 Monotype is the perfect medium for these depictions of fleeting magical moments. If you’ve never seen Bill Jacklin’s work before there will plenty of opportunity this year, with shows at Marlborough Fine Art London (6th May – 7th June) and the Royal Academy of Arts (3rd June – 28th August), as well as 2 new books; ‘Bill Jacklin Graphics’, and ‘Bill Jacklin’s New York’. He utilises the ‘immediacy of the process’ by working fast, using whatever he can lay his hands on but usually large brushes and rags, to move the paint around the surface, making sweeping gestures, lifting colour off to create snowflakes falling or highlights on the water…the colour often has a fluid appearance that allows the work to have not only energy and movement but also a sense of wholeness too. Jacklin has a very fluent visual language which serves to both express his feelings as well as describe the sense of place. 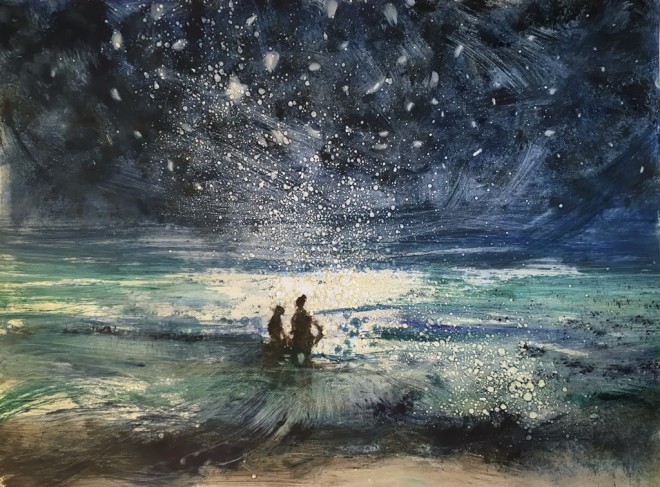 One of the monotypes created by Bill Jacklin RA during his week long residency at the Center for Contemporary Printmaking in Norwalk, Connecticut, March 2016

Jacklin almost always works to-ing and fro-ing between monotypes and oil painting, using monotype to explore subjects that he can later depict in oil paint on canvas. He says ‘through the process I try to find an equivalent of the energy and light that I see’, and that the monotypes ‘lead [me] to push the boundaries in painting’. The monotypes could almost be seen as a backbone to his paintings, and that the paintings would not exist without them. 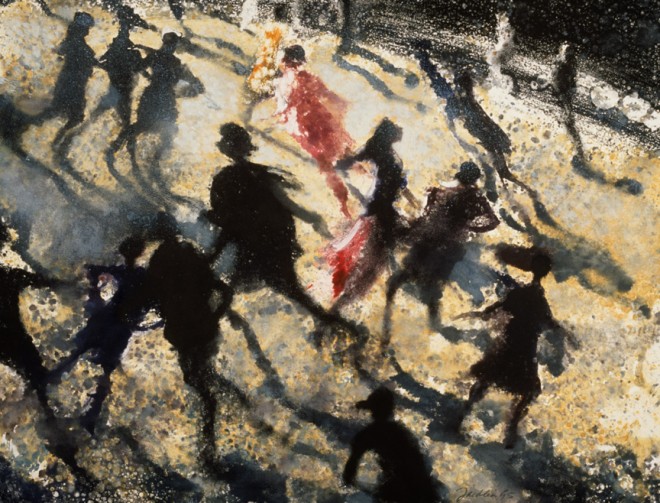 The appeal of monotype is multi-faceted. It forces you to work fast and stops you from getting too bogged down or precious about your work. The immediacy of the process makes it a whole lot easier to be more experimental about your visual language, mark-making or compositional approaches.  It also feels a whole lot less devastating if the image doesn’t quite work out the way you intended. It is the most liberating, most painterly and the most dynamic of all the printmaking processes; you only have to look at Bill Jacklin’s monotypes to see that. 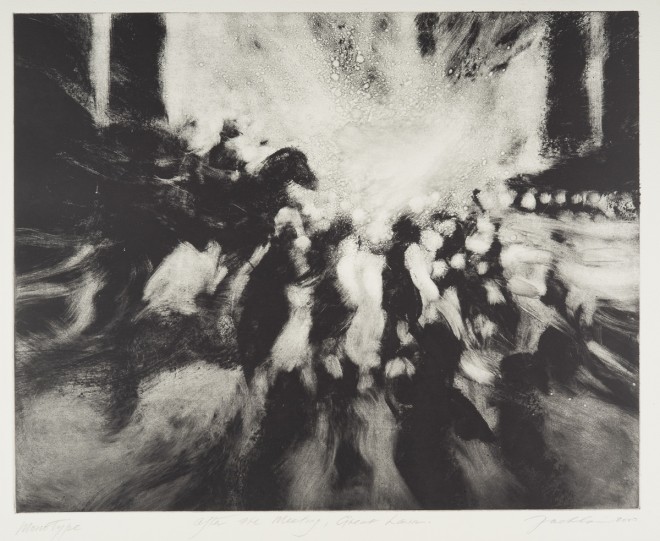 ‘Bill Jacklin: A Survey of Graphic Work from the Sixties to the Present’ is at the Royal Academy of Arts, 2nd June – 28th August

‘Bill Jacklin Graphics’ (RA Publishers) is available from 5th May

Old Masters such as Rembrandt and Van Eyck, as wel

It is the final week to enter Jackson’s Painting

The smoothest shading results can be most easily a

Jackson's Alcohol Inks are our range of highly sat