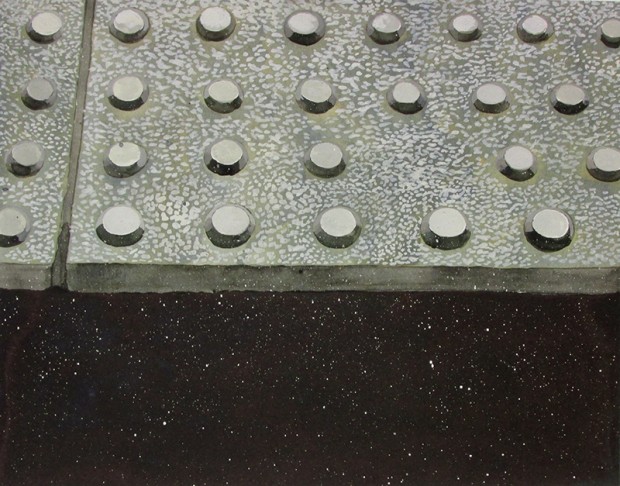 Inspired by space, nature, industrial remains and science fiction, emerging Chilean artist Antonia Bañados’s art is as mysterious as it is beautiful. Working across 2D, 3D and moving image, Bañados evokes the anxieties of our modern age, creating works that speak of an alternative reality somewhere between utopia and oblivion. Now based in Edinburgh and soon moving to Berlin for an art residency, Antonia recently won Jackson’s Young Artist Prize at the RWS Contemporary Watercolour Competition with her painting series ‘Hole’. We caught up with Bañados to find out more about her work, inspiration, and future dreams. 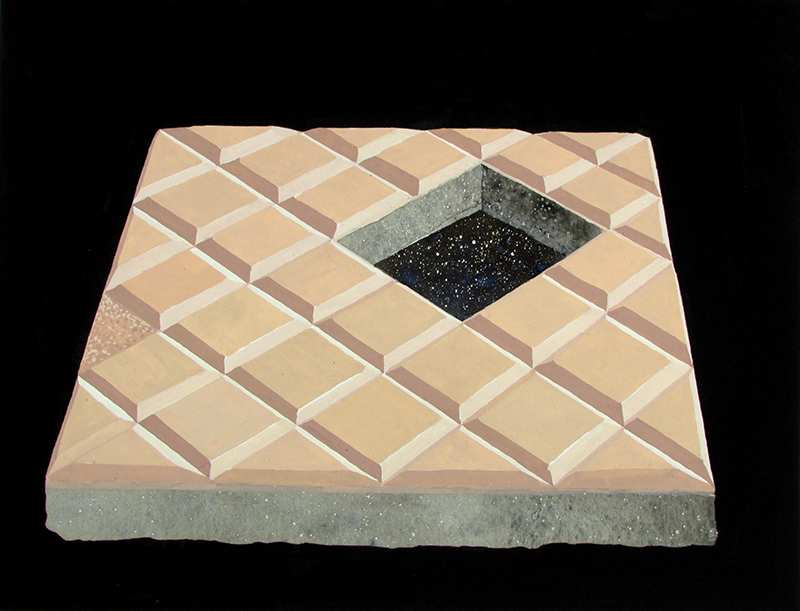 Sophie: What inspires you?

Antonia: Many things: cabinets of curiosity, natural and history museum collections, vast landscapes, and images of space. I love the imaginary landscapes and perception of space in science fiction books, such as ‘Solaris’ by Stanisław Lem, or the writings of Jules Verne or H. P. Lovecraft. One of my favourite films is Space Odyssey 2001. I also love documentaries by Patricio Guzmans, a Chilean director who merges different temporalities and stories. 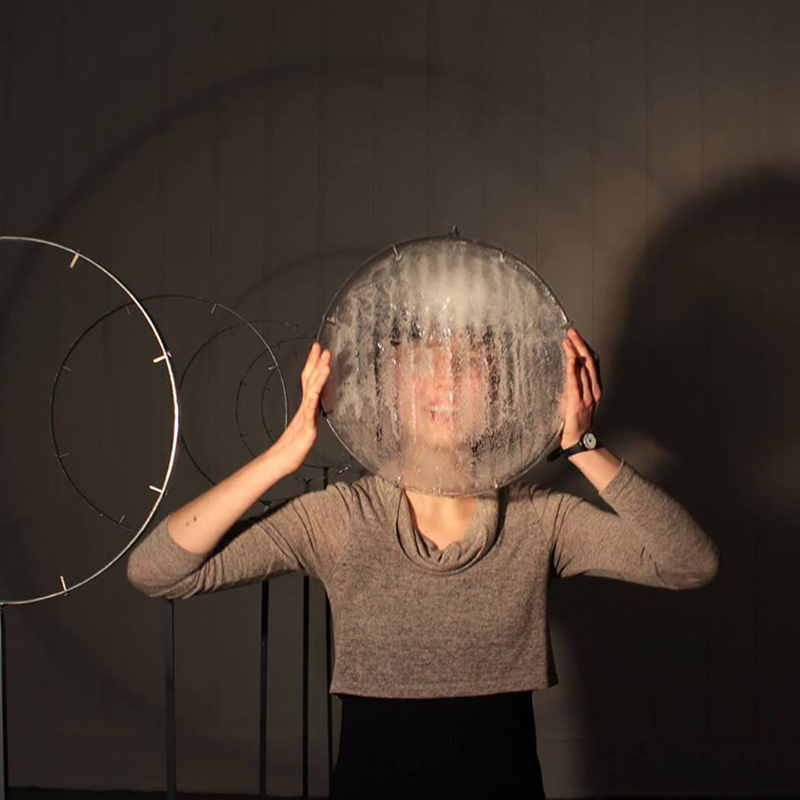 Sophie: You’re originally from Santiago in Chile. Why did you decide to move to the UK? How has working and living in Scotland changed the way you work?

Antonia: I felt somewhat limited in what I could do, see and learn in Chile. The art scene there is kind of precarious: there’s no major art collections and art schools don’t have the same technical support as in the UK. Scotland was a marvellous surprise for me. Since I arrived here my perception of nature, time, and how we are connected to it, immediately started to change. My home city of Santiago is monstrously big, very polluted, and with constant construction and demolition work. In contrast to this, Edinburgh is pure green, and while kind of frozen in history, it is exposed to huge seasonal weather differences (like the change of light), which make the passing of time more palpable and real. These changes have had a strong impact on my work: I started to feel nature in a different way.

Antonia: Most of the paintings I’ve done in the past two years have been in gouache and ink or both. It’s quite new for me. Gouache felt like a childish pleasure, an escape from my serious “artist statement”. I started painting in a very small format, creating one painting almost everyday during one summer. After doing a couple of them, I realised there was a particular kind of language that I wanted to explore more consistently, one that was closer to render modelling, illustration, and medieval painting. 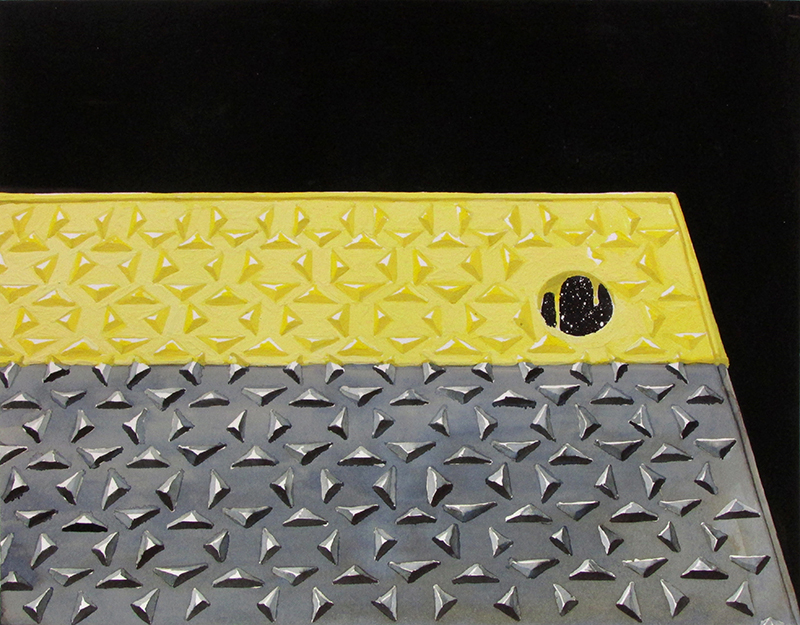 Sophie: Tell us about your creative process.

Antonia: I usually start observing and collecting images and detailed sketches of spaces. I then join them together. At some point it becomes clearer what they have in common and when that happens I can play with that element and use it in my work.

For my painting series of the ‘Holes’ (entered into the competition), I was obsessed with observing floors, pavements and their patterns. I had a large quantity of pictures on my computer of floor details which I found by walking in the street. I was also very fond of space images and the idea of emptiness. I made the painting of a concrete tile with a missing module, and as it is gouache, the missing part was the white of the paper and I wanted the missing part to be further away. After making that first one, I started seeing missing parts and holes everywhere. 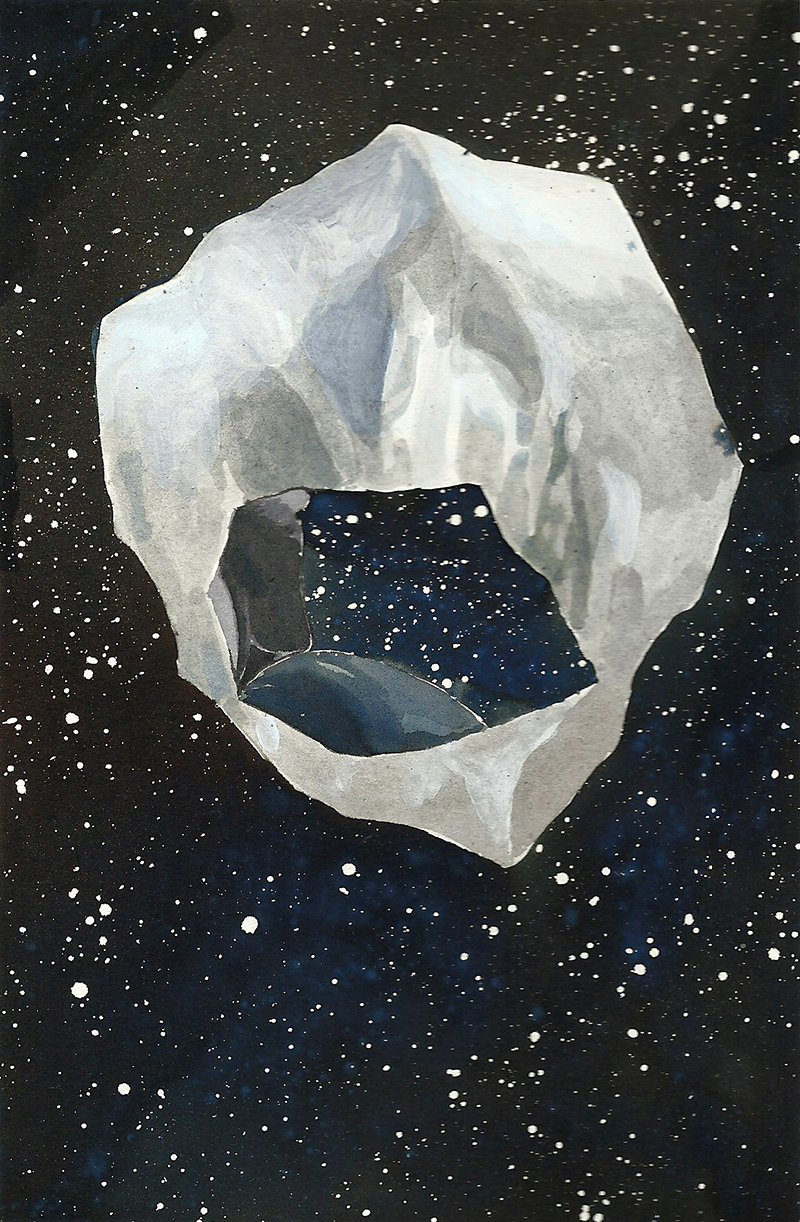 Sophie: Your artworks make use of natural and industrial forms, evoking concepts of utopia, dystopia and the future. Why are the environment & space important themes in your work and why have you decided to explore them through art?

Antonia: Industrial remains have a very strong and double-sided effect on me, they are like a guilty pleasure: for me, they symbolise the failure of the system we live in, and on the other hand, they evoke parts of a futuristic, utopian and alternative reality, especially when they are abstracted and removed from their context. Space and nature are things that exceed my understanding because of their immensity, and physical and temporal scale. I’m not a religious person but I do feel a spiritual dimension when contemplating them. I also get anxious thinking about the disposability of things – I keep a closet full of jars hoping to reuse them. Today the natural environment somehow represents what we can lose or have lost, and space represents what we can get. 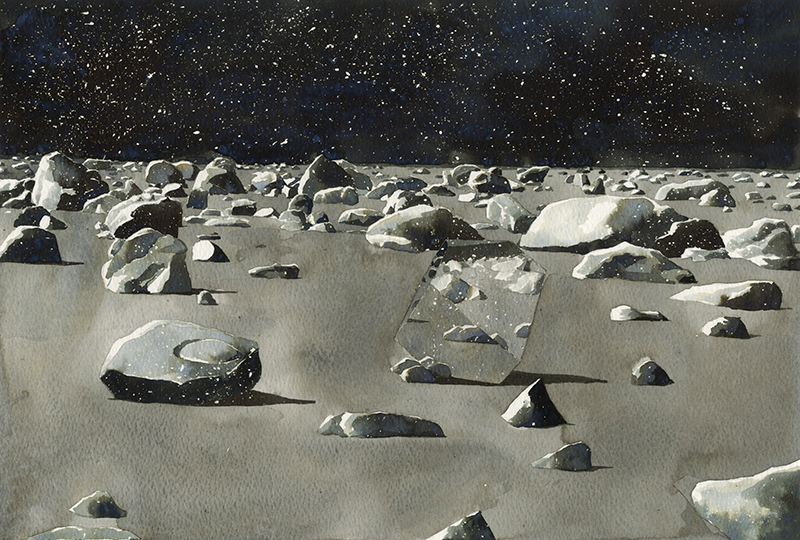 Sophie: Can you speak about the cross-section between art and the environment? Would you consider yourself to be an environmentalist?

Antonia: As a person, I consider myself an environmentalist. But I think using art as propaganda of one single ideology or with a fixed purpose limits its possibilities. Art occupies the space where science or rational thinking have no answer. So rather than try to use art to present an issue with clarity, I feel it can instead be used as a means to speculate about the environmental crisis we’re in: a major problem but with no clear solution. In my work I try to construct possible worlds that are inevitably born from the world we live in. I appreciate the research and theories of the Anthropocene, which examine how the human activity has defined a new geological era on earth as an aesthetic condition. It suggests a nostalgic feeling toward the destruction of our world, a world that our generation barely had the chance to know because the destruction started before we were born. 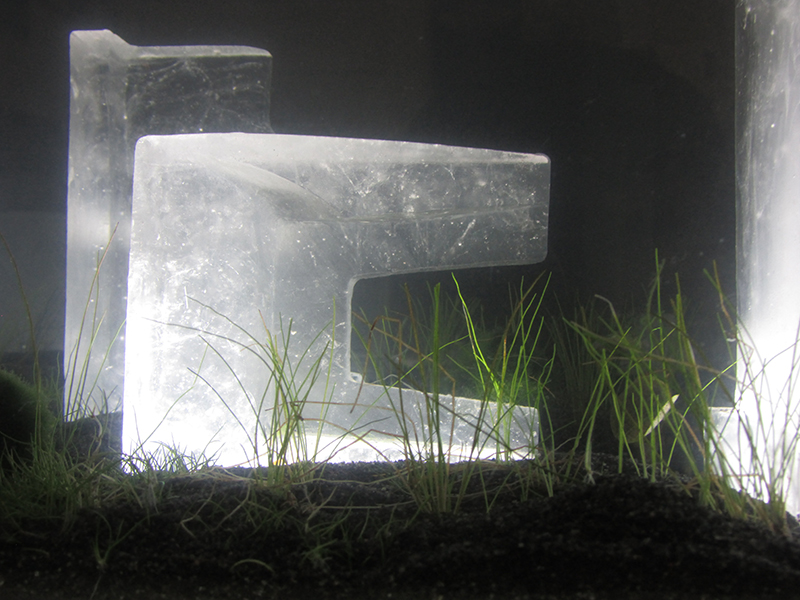 Sophie: What artists inspire you?

Antonia: I really love the work of Los Carpinteros, a Cuban duo working in watercolour and with installations. I also like Paul Noble’s large-scale pencil drawings, the 3 dimensional landscapes of Mariele Neudecker, and the living ecosystems of Pierre Huyghe. Last summer, I also discovered the work Mexican artist Ariel Guzik during the Edinburgh Art Festival and I found his work fascinating in the way that he attempts to establish a visual and sound communication with cetaceans through drawings and invented gorgeous instruments that go under the sea. 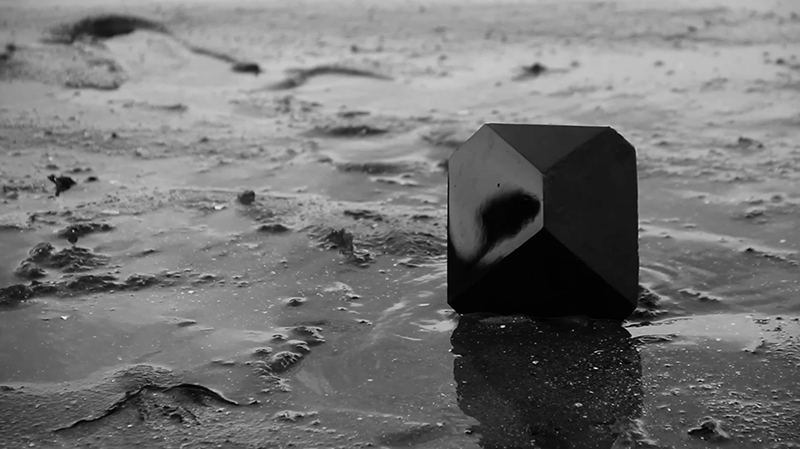 Sophie: What are some your favourite materials and techniques to work with? Do you plan to continue working across 2D, 3D and moving image?

Antonia: My most natural creative process is probably to paint and draw. I usually start from there and then jump into other mediums such as glass or moving image. With the 2D medium, I love to test different processes, techniques and languages for producing images in small sketches. For graphics, one of my favourite things is the brush pen to experiment with different patterns and rhythms. I’ve been doing sketches of little stones or rocks in this way. 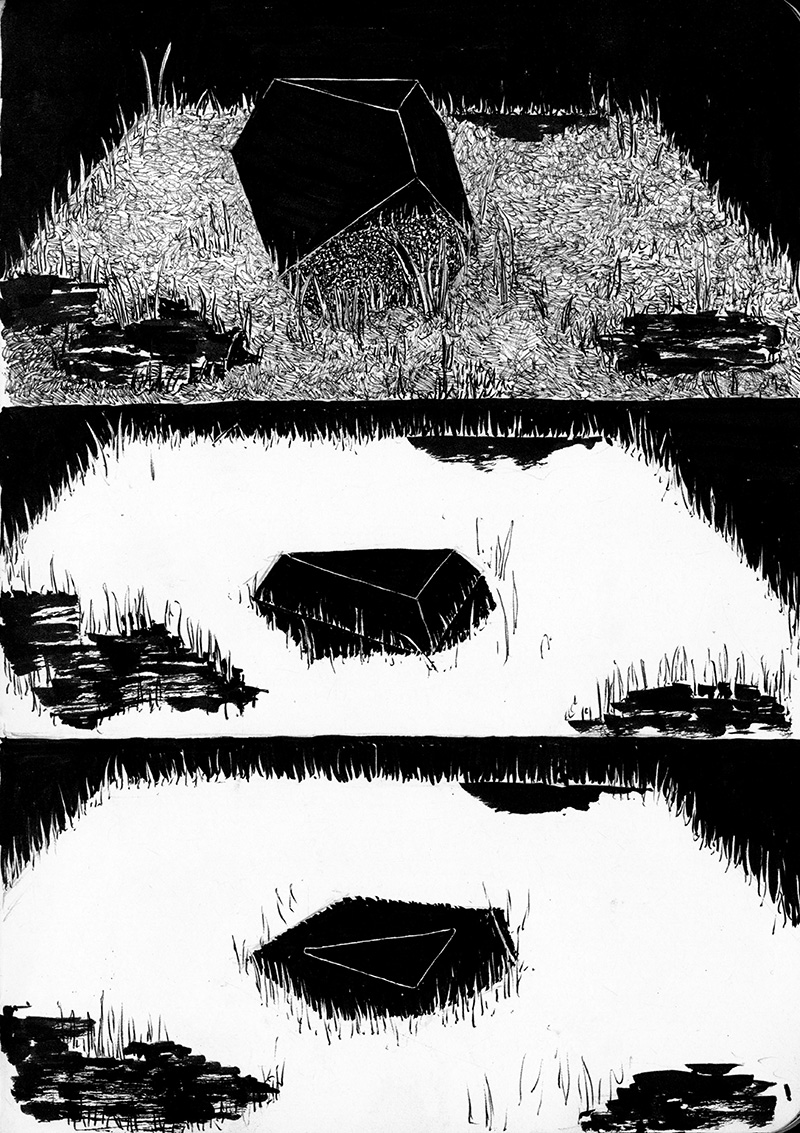 Sophie: How do you plan to make use of the prize?

Antonia: The prize came at a really good time for me, I’m planning to use it for the materials that I’ll working with for the three month art residency in Berlin which I’m starting in June at Galerie 102. I’m really looking forward to spending this time in a more intimate creative process entirely focused in painting. I’m planning to work on a new series of works on paper, referencing landscapes with natural and industrial shapes and developing a new language in which the natural and the industrial merge completely in a same layer. I imagine these pieces will be in a larger scale, perhaps as a polyptych constructing a single landscape composed by the grouping of different elements – similar to a Japanese paper mural depicting a landscape or to a medieval religious polyptych. 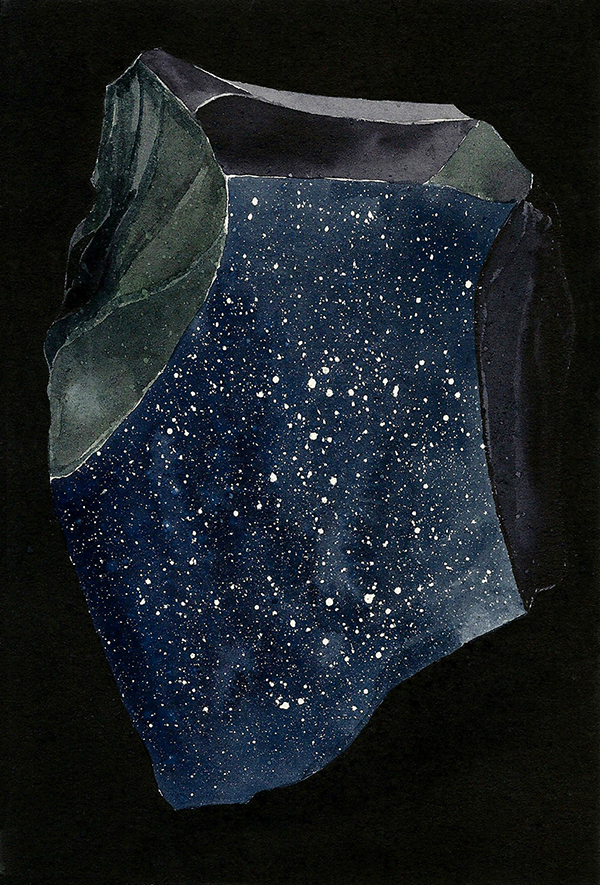 Sophie: What are your upcoming projects and plans?

Antonia: Next month I’m setting up my Masters degree, and I’m really eager to finally show my project ‘New Lands’ with a short film of the aquatic environment that I’ve been constructing for the last couple of months. After that I’m moving to Berlin, which is a very exciting opportunity. I was impressed by the amount of ruins still in existence, you can still see the traces of war everywhere amidst the minimal language of the contemporary reconstruction. After this, I will move to Granada in Spain to do an applied art workshop on the creation of tiles and geometric ornaments of the Alhambra, the Spanish islamic citadel famous for its ornaments and architecture. These artisan procedures really fascinate me as well as the art of geometric tessellation. I’ve had to work with that subject in my work before and I think it’s going to be a very enriching experience to learn those processes on location.