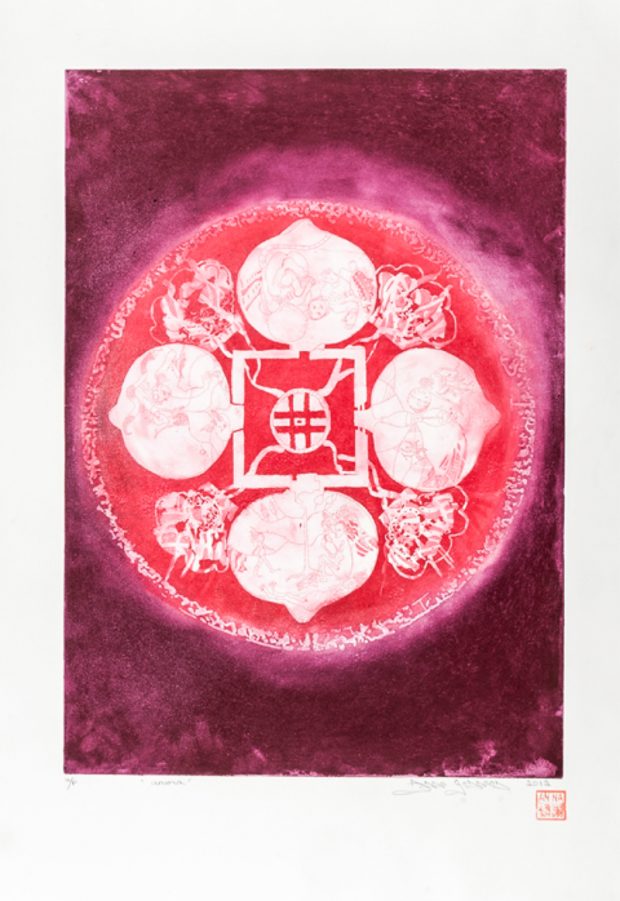 As the founder of Green Door Printmaking Studio, one of the few UK open access artist studios dedicated entirely to environmentally-sound printmaking, British artist Anna Johnson has played a key role in establishing and promoting safer and sustainable practices in the country. The Derbyshire-based studio offers tailored courses and consulting, alongside a programme of workshops covering processes such as acrylic resist etching, monotypes, waterless lithography, electro etching and photographic etching. We caught up with Anna to get her insight on how the green printmaking movement has evolved since its underground beginnings, to her advice for studios and artists eager to transition to safer ways of creating in print-based media. 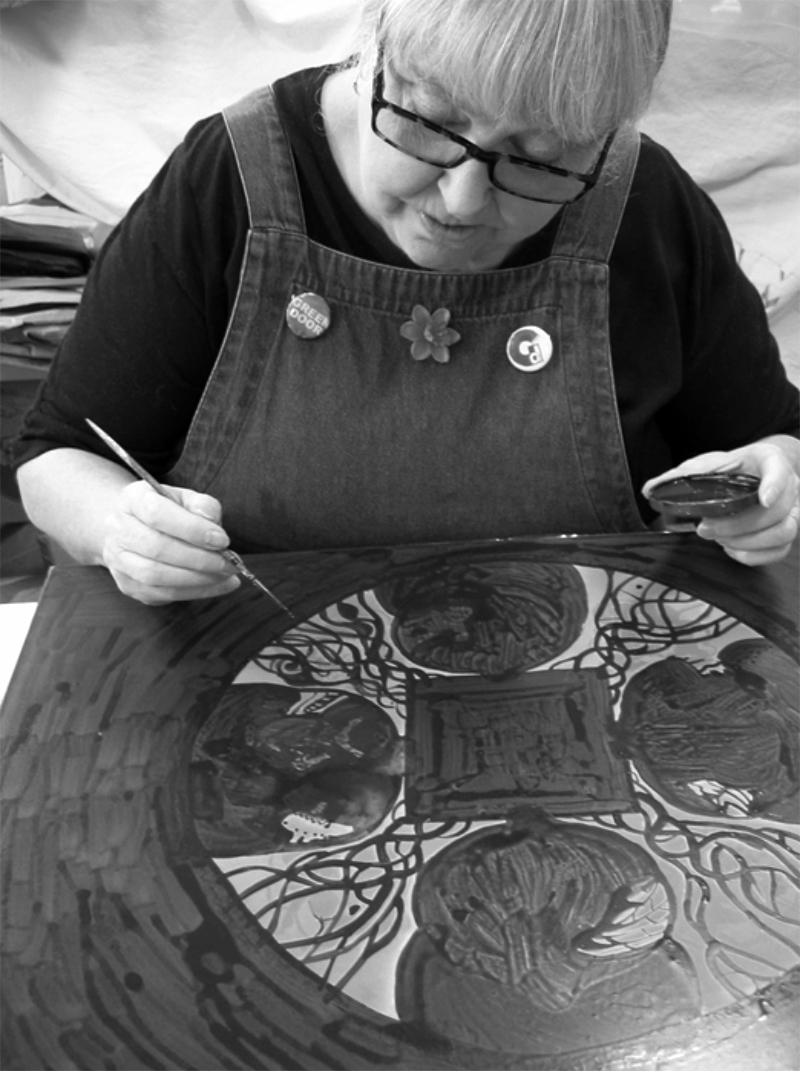 Sophie: When did your interest in the environmental ethics of printmaking begin
Anna Johnson: I studied traditional printmaking at Edinburgh College of Art during the Sixties, using traditional materials such as nitric acid to etch with. The emphasis in those days was always more on creativity, exploration and experimentation, not health and safety. A great number of artists, particularly printmakers, have become ill as a result of the materials they used. I became aware of the changing ethics surrounding these processes, in particular for etching. 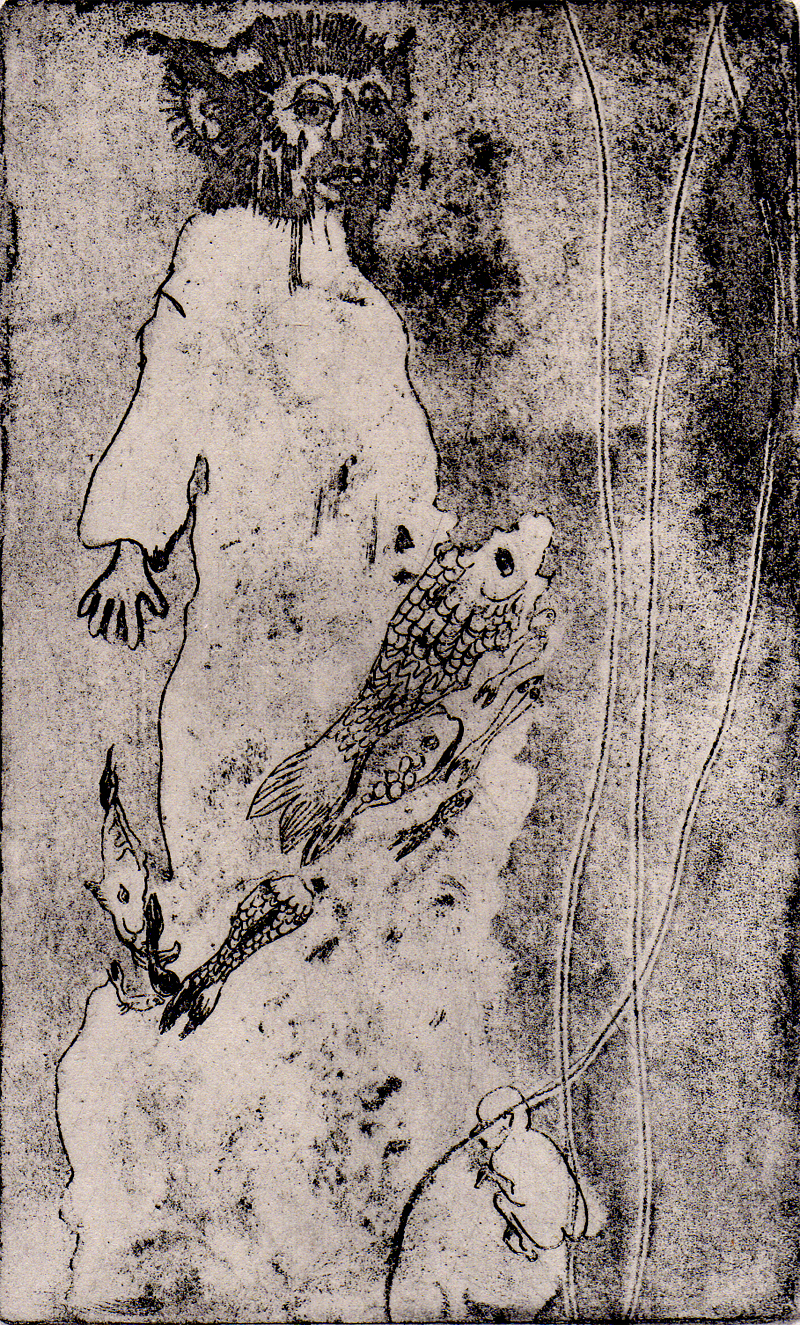 When I opened Green Door Printmaking Studio in Derby, I decided that it would be environmentally conscious studio from the start, eliminating the use of hazardous materials, instead converting all of the traditional techniques to using safer and more environmentally sound materials. It was thanks to the influence of Alfons Bytautas (then a master printmaker working at Edinburgh Printmakers), and another great friend Professor Nik Semenoff, that I was able to establish the studio under the guidance of our combined research. 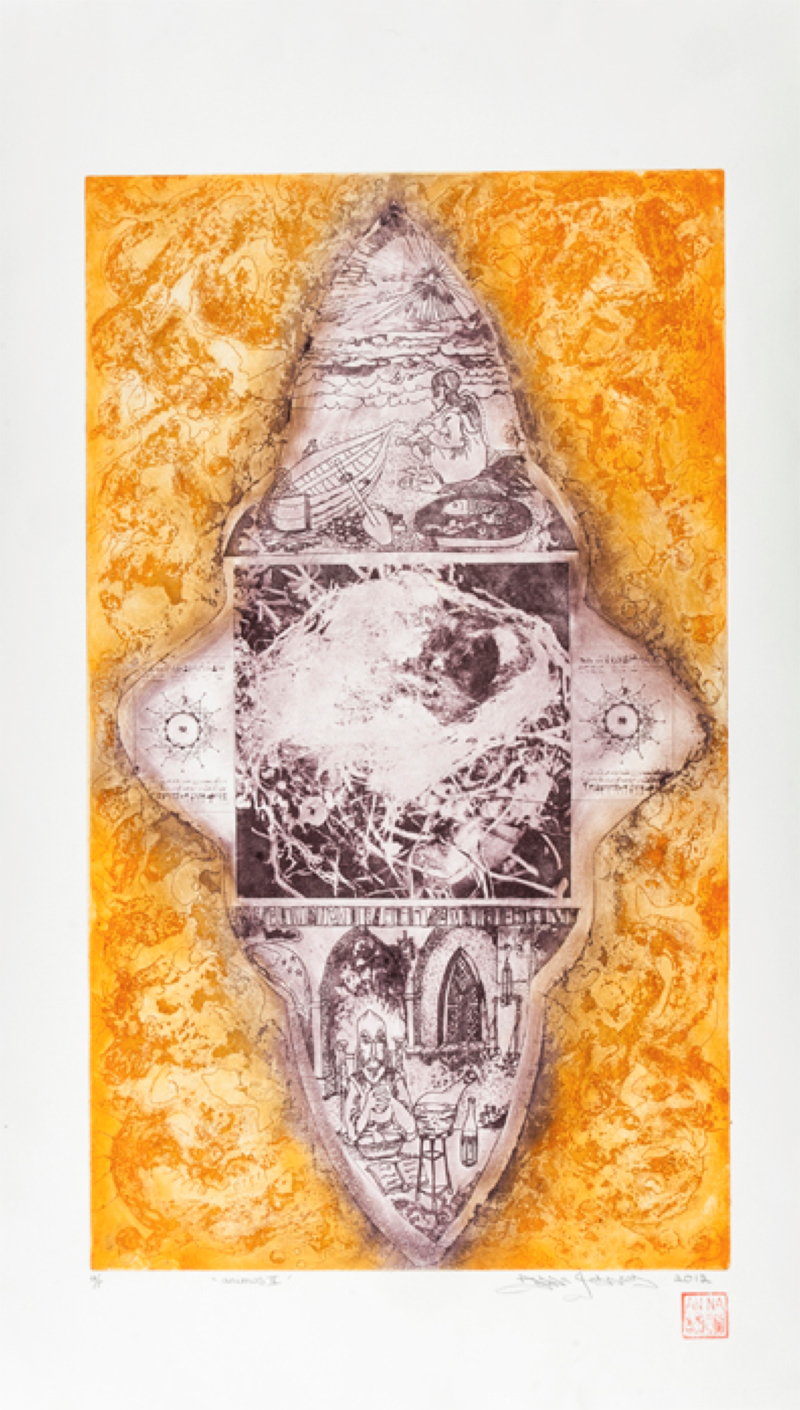 Sophie: Can you explain why you use the term ‘environmentally sound’ and not ‘non-toxic’?
Anna: When printmakers began to become more aware of the ethics of health and safety surrounding printmaking around 20 years ago, a lot of different phrases started to surface to best describe the ‘newer’ (as opposed to the traditional) processes. I believe the phrase ‘Non-Toxic’ gives the impression that all printmaking under this umbrella is not toxic and therefore harmless – encouraging the printmaker to use them in his or her home studio without worry. For me, the term is too simplistic and potentially dangerous. 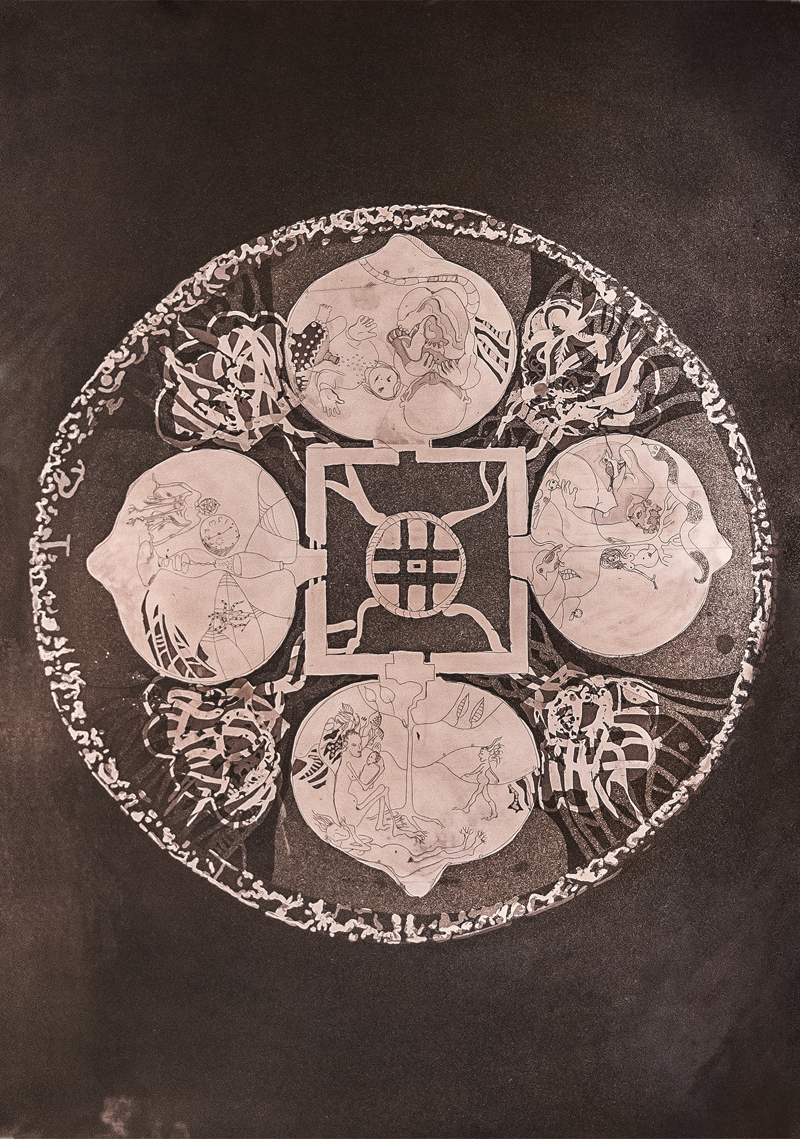 When considering a process such as etching, even when using materials less harmful to the printmaker and the environment, the term ‘Non-Toxic’ is simply incorrect. We are still using materials that should be used in a controlled and health conscious way. These materials and processes still require training and careful consideration when using them. However, when compared to their more caustic and detrimental traditional counterparts, they are more environmentally sound. 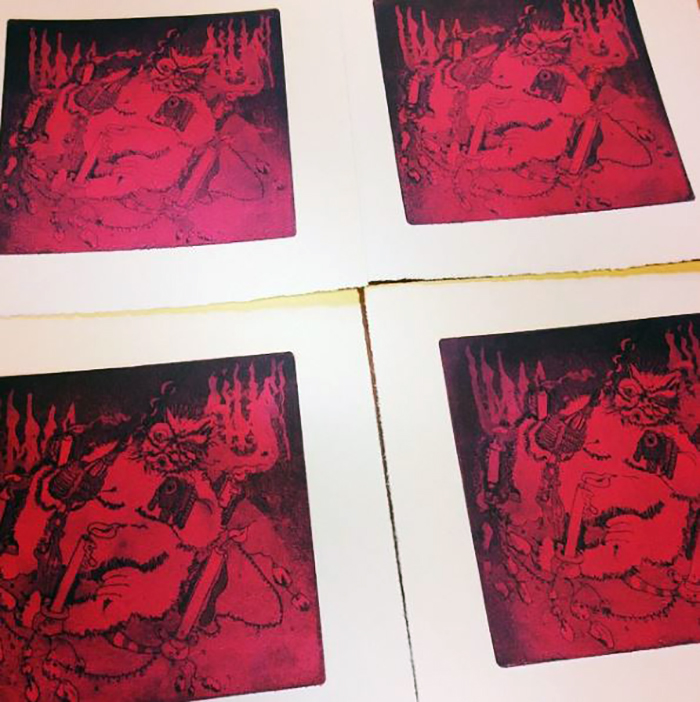 Sophie: Can you talk about how the green printmaking movement has changed over time? Is it becoming more mainstream or would you still consider it to be very niche?

Anna: Coming from a traditional background and being part of the older generation myself, I noticed that many traditional etchers were ensconced in their ways and unwilling to try something new. I have received many comments over the years from printmakers who don’t believe they should change, and many consider the newer techniques to be pale imitations of the traditional ones. 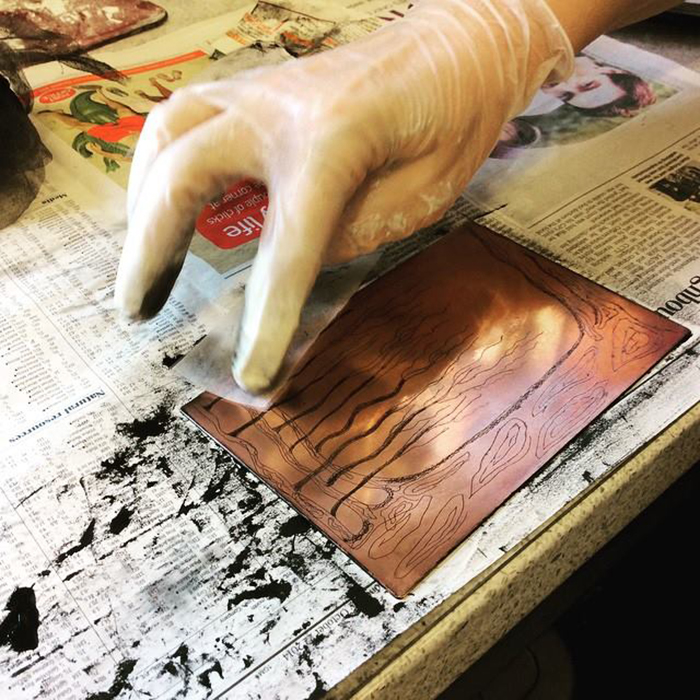 Many printmaking workshops over the years have adopted the newer, safer, techniques. Some still choose to practice both the traditional and environmentally safer techniques in tandem. In the studio, I have met many printmakers who want to work in a safer way but I see little evidence that this is the norm in larger educational faculties such as colleges or universities. Many have instead chosen to downsize or even remove their printmaking departments altogether rather than spend the time, energy or resources to convert. Instead, these spaces are being used in favour of digital suites and IT studios, which I feel is so short sighted. Often, printmakers and institutions feel that to convert to these safer processes would be more expensive than the traditional counterparts. In fact, it has been proven to be less expensive in the long run to do so. 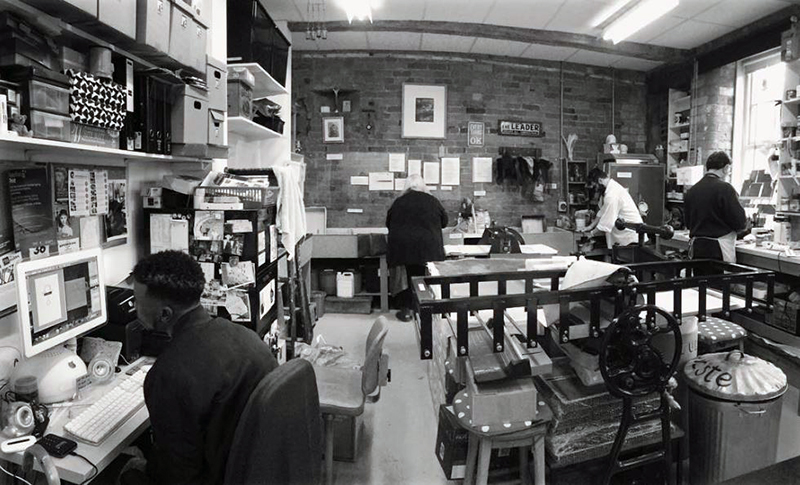 When I first set up Green Door, 10 years ago, I felt many of those resistant to change looked down on me. I was called a ‘greenie’ – a hippy – but, I knew that this movement was the first important step to ensure that printmaking wouldn’t become a dying art form. Change in favour of environmentally sound ethics is quite simply the future. Far from being niche, artists will always want to create hand pulled prints – even utilising computers in the process – and making these safer processes more mainstream will only enable this. 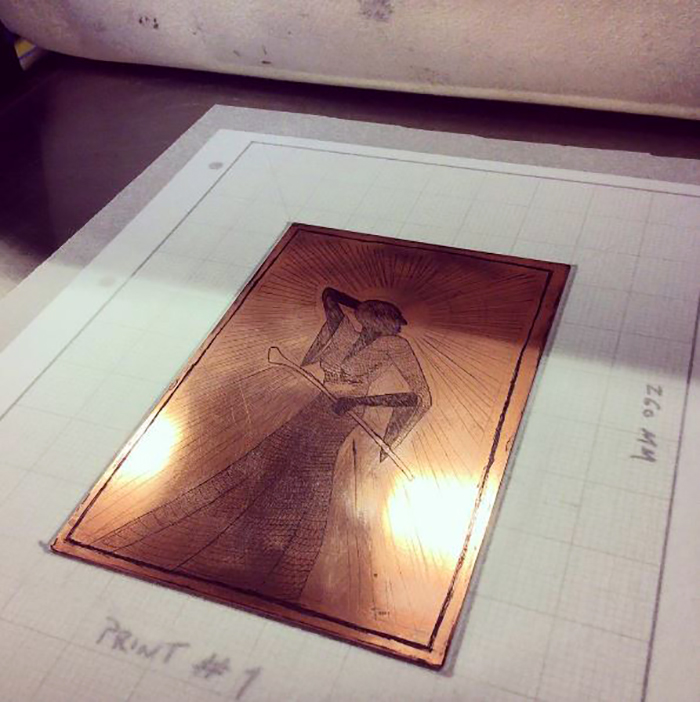 Sophie: What are some of the main challenges in order for environmentally minded practices to become the norm in printmaking?
Anna: Knowledge and education. We have to teach artists and printmakers how to use the safer materials available to us in order to get the same – or sometimes even better – results. Printmaking studios have always been a valuable resource for disseminating knowledge. 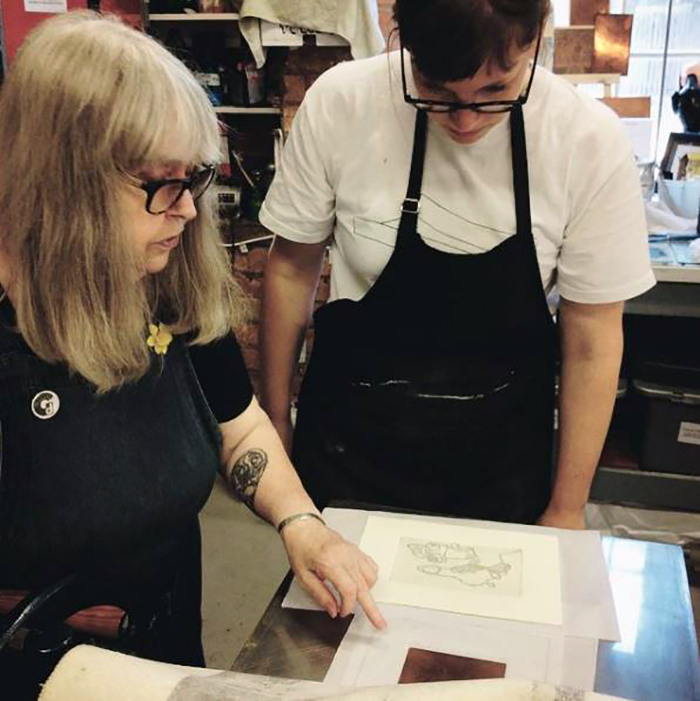 When these spaces and resources were readily available, students would absorb this knowledge at the beginning, throughout their art education, in schools and colleges. They would then join printmaking studios to acquire further knowledge. This in essence is still the same, although I would argue there is less teaching or facilities available in Universities now. We now have an even greater responsibility to teach and spread the word. 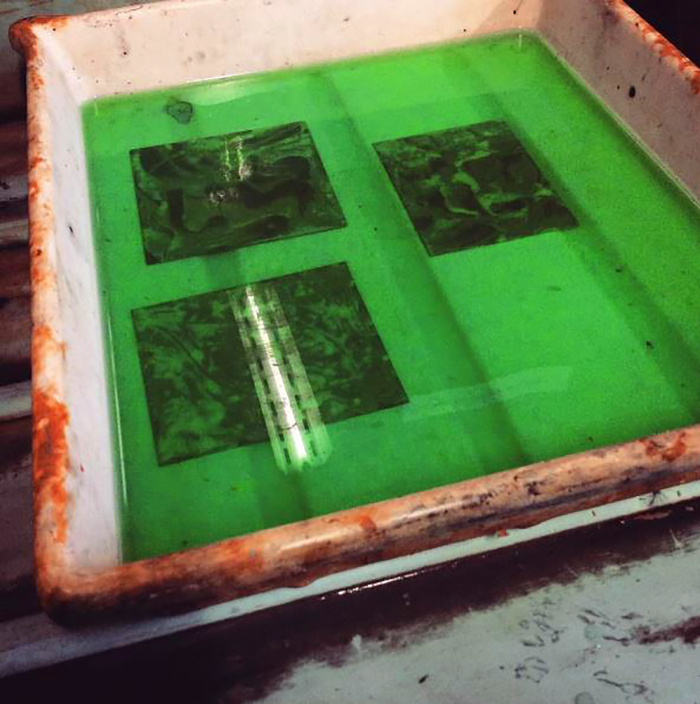 The soap ground etchings biting in the mordant during an etching course at Green Door Printmaking Studio, Derby.

Sophie: Can you talk about some of the key innovations in this field?
Anna: Speaking primarily as an etcher, the key innovations have been the mordants and grounds that we now use. Solvents (eg. Turpentine or White Spirit) are the most important item in any printmaking studio to cease and desist from using. In traditional etching, once you remove solvents, you are back to square one – you can no longer remove the grounds or resists that you use to coat the plate. This then gives you the option of using acrylics as resists (in many forms), but the process has to work as an organic whole – much like baking bread. 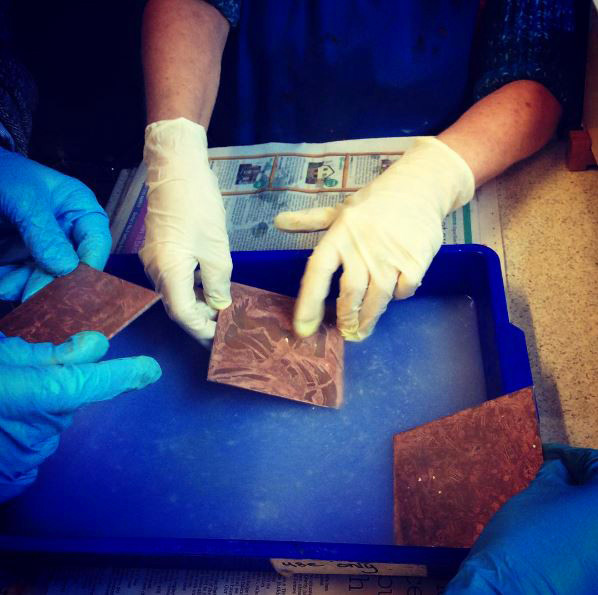 Washing off the soap ground during at etching course at Green Door Printmaking Studio, Derby.

You have to consider the whole process: from degreasing your metal, to grounding your plate, to etching and then removing the ground with a stripper. All of these elements must work together cohesively, and be considered. I have seen many printmakers who think nothing of pouring solvents and acids down the sink with no regard for the journey those materials are going to take through our water system, nor the harm this is going to cause. I have also seen misguided etchers put their hands in nitric acid to test the bite.

At Green Door Printmaking Studio, I am known as a bit of an alchemist. I mix all of my own materials, from the resists to the mordant. No mordant is ever going to be 100% ‘safe’, they are used to corrode metals. However, depending on the choice made, you may be required by law to safely dispose of the chemical waste the mordant creates when etching (this is the case when using Ferric Chloride). At Green Door, I use a self-replenishing mordant known as Cupric Chloride, which does not require any waste disposal. It was pioneered by Professor Nik Semenoff and Alfons Bytautas.

Liquid Photographic Gravure; a photographic etching process that combines purely photographic artwork, hand drawn or a combination of both to produce a printable etched plate. Prints by Green Door tutor Kevin A. Pickering

Sophie: What are some of your favourite (environmentally sound) techniques and materials you like to work with?
Anna: My favourite techniques are Acrylic Resist Etching (this can be utilised with copper, zinc and aluminium) and Photographic Etching (using photopolymer or gravure techniques). I have a number of favourite inks, including Caligo Safe Wash and Hawthorn Stay Open. My favourite paper is Hahnemühle Etching 300gsm (although I am partial to handmade Japanese paper, such as Kitakata or Gampi). 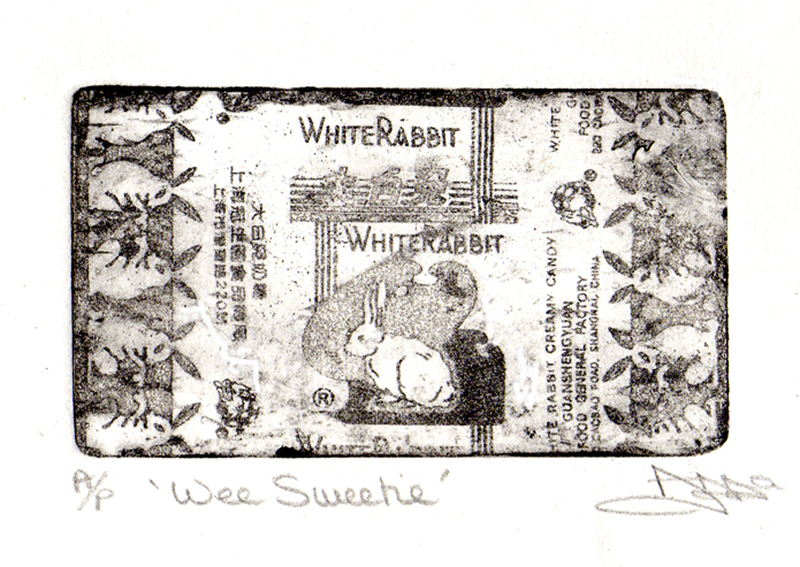 Sophie: What advice would you like to give to an artist or studio who is looking to explore safer & environmentally sound alternatives to traditional printmaking?
Anna: To any artist who is looking to explore safer printmaking techniques I would say; do your homework. Read and research the techniques you would like to explore. Go and find a good reliable teacher. Research environmentally sound studios online. Most importantly; find a Guru you can trust; who will guide you and let you explore the processes you wish to learn. To studios who need advice or guidance, I am available as a consultant. If you would like to learn how to set up your studio or convert, please get in touch. 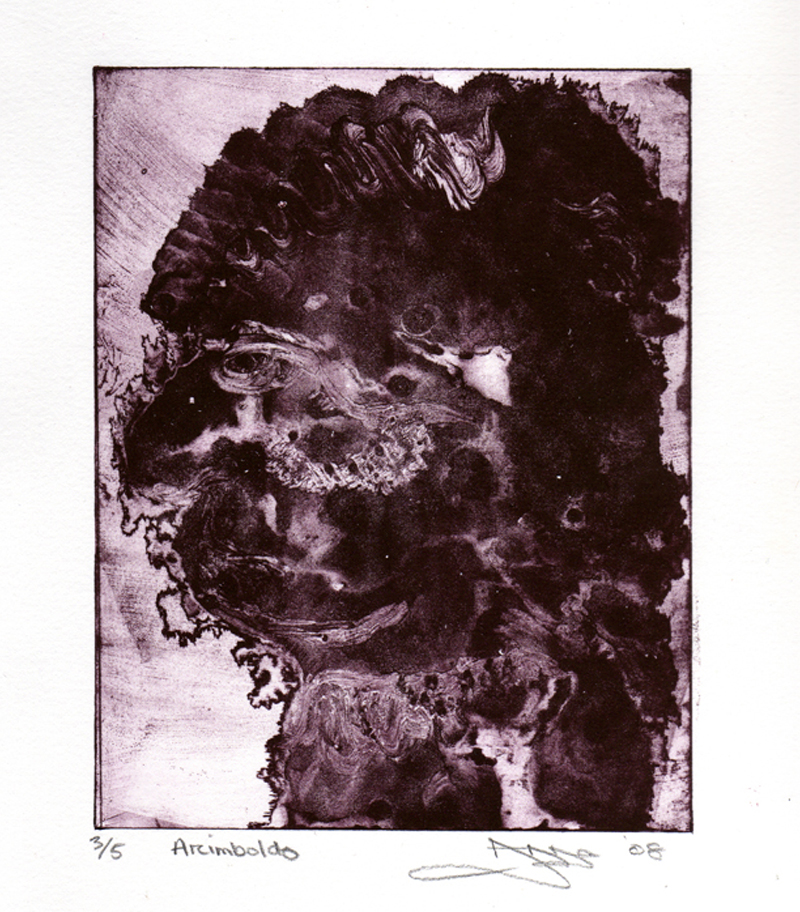 Sophie: Who are some of your favourite eco-minded printmaker artists?
Anna: My two gurus are Alfons Bytautas and Professor Nik Semenoff. Also my good friend and patron of Green Door Printmaking Studio, Brent Millar. An honourable mention also goes to my daughter and business partner, Pandora Johnson, who I admire greatly as an artist. 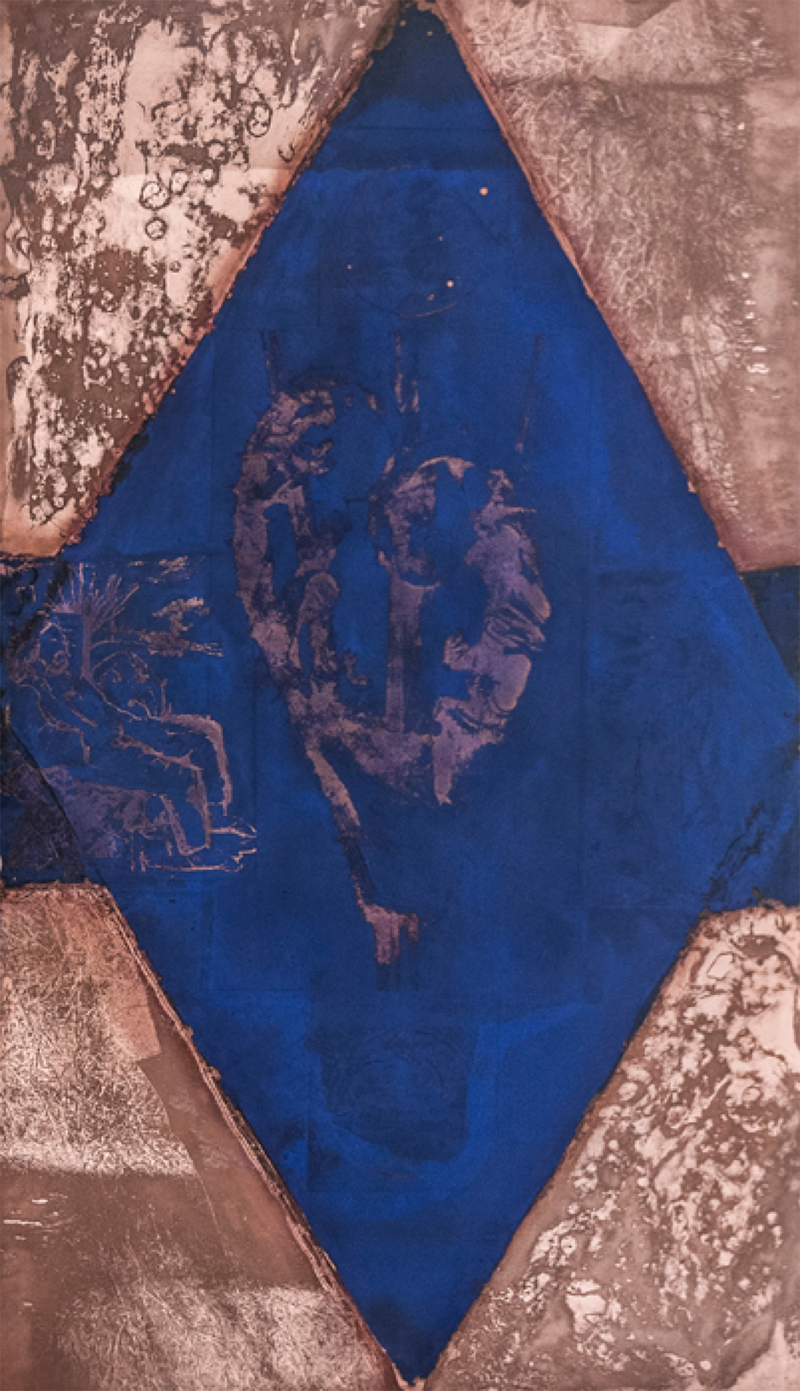 Sophie: Any upcoming projects or news?
Anna: I currently have a series of etchings on display in the Royal Derby Hospital as part of the Air Arts project. I was invited as a master printmaker to exhibit at the Academy of Fine Arts, Sicily and at the Biennial in Duro, Portugal later in the year.

Green Door Printmaking Studio has two major upcoming exhibitions: one at Déda, Derby; an exhibition in collaboration with our colleagues The Small Print Company and Derby’s 2nd Book Festival (5th May – 30th July). The second, ‘Worn’ at The Old Station Gallery in Rowsley (13th August – 8th September). This is also our 8th year of organising the International Print Exchange – a printmaking exchange that is open to all, celebrating international printmakers and bringing our ever growing community together. For more information, please visit our website.

To learn more about how to create a non-toxic and environmentally friendly printmaking studio you might wish to read these books:
Screenprinting – The Complete Water-based System by Robert Adam and Carol Robertson