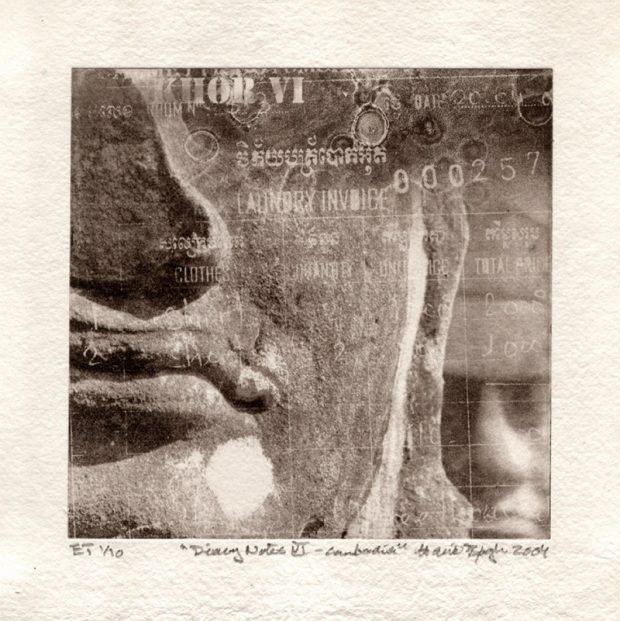 As one of the key influencers of the non-toxic printmaking movement in Europe, Danish artist and author Henrik Bøegh has dedicated his life to spreading non-toxic intaglio processes and materials. After discovering the work of pioneers of the non-toxic printmaking movement such as Keith Howard and Friedhard Kiekeben in the early nineties in the US and UK, Henrik Bøegh returned to Scandinavia, determined to grow the movement throughout Europe. Bøegh continues to lead a global workshop, education and conference programme dedicated to environmentally safer print processes and materials through Grafisk Eksperimentarium, which he established in Copenhagen in 1997. We decided to speak with Bøegh about the growth of this movement in Europe and the challenges artists face in transitioning to safer practices. 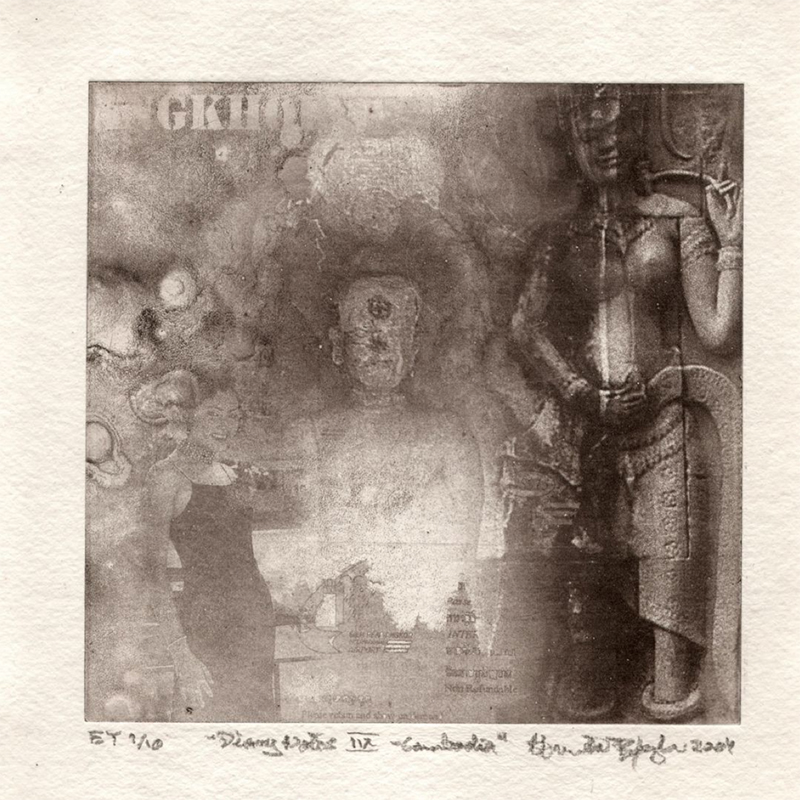 Sophie: When did your interest in the environmental ethics of printmaking begin?
Henrik: I have devoted a bigger part of my life to non-toxic intaglio printmaking since the 1990s. I have been working as a professional artist since 1977 especially with black and white photography, but also with traditional printmaking. However, I stopped intaglio printmaking because of the very toxic environment of printmaking studios. Eli Poinsaing, Associate Professor at the Royal Danish Academy of Fine Arts introduced me to his new and completely non-toxic discoveries using photopolymer plates (solarplates) for photogravures as well as vegetable oil for cleaning the plates. 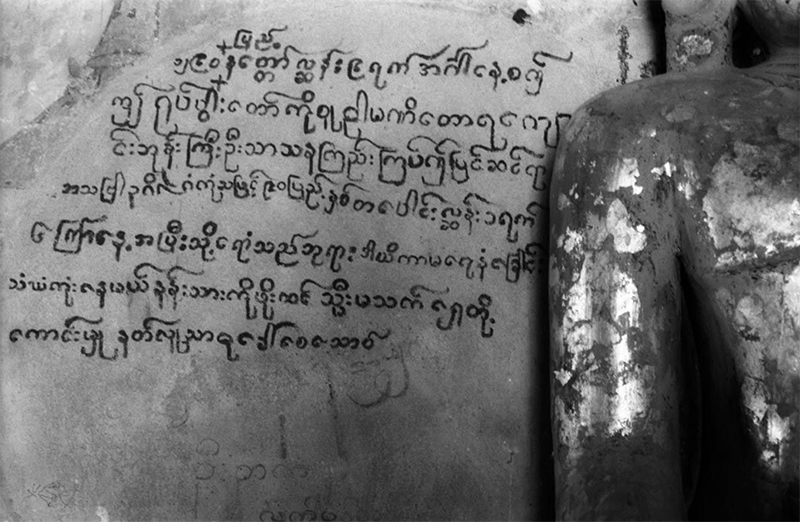 During the mid 90s, I also heard about the experiments Keith Howard had begun with photopolymer film and acrylic etching grounds at the Canadian School of Non-Toxic Printmaking in Alberta; and also about a large printmaking studio in Edinburgh where they had completely changed all classic printmaking methods to the new non-toxic methods. I made visits and participated in workshops in both places. What was going on there and what he had developed was nothing but a revolution to me.

A few years later I wrote a hands-on manual on Photogravure, which I published for fellow photographers in Denmark. At the same time I started conducting workshops for individual photographers using this new medium in my own studio in Denmark. 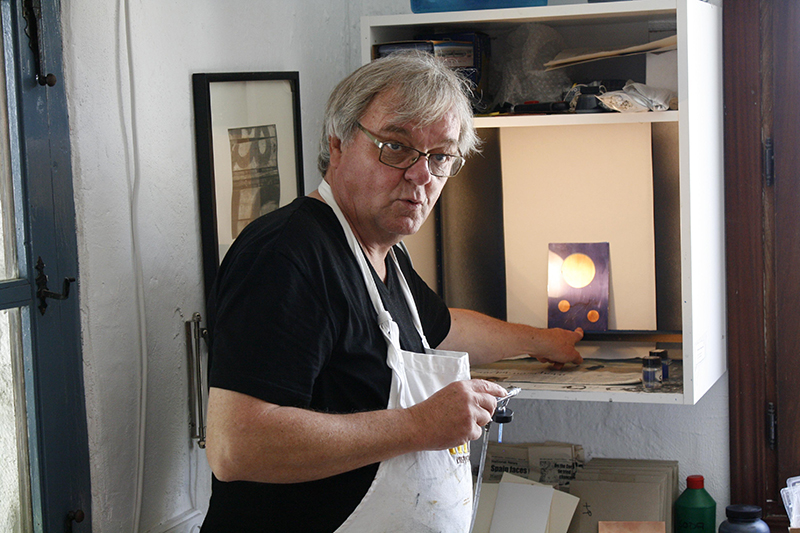 Sophie: Can you talk about how the green printmaking movement has grown around Europe?
Henrik: Most of what has been written or communicated on Non-Toxic Printmaking has been written in English, Spanish, French, Dutch and Danish. This means that you can talk about a movement in the northern part of Europe where everybody understands English (Scandinavia, UK, Germany, Belgium and the Netherlands). Spain and France came later. In southern European countries and the former East European countries where people do not communicate very well in English, practically nothing has happened.

Can you tell us what kind of projects you run through Grafisk Experimentarium?
Henrik: We test and evaluate new printmaking techniques and materials based on acrylics and polymers. We also impart our experience with such techniques and materials to art school and creative artists from around the world, and advise schools and graphics workshops on how to establish and equip non-toxic studios. In addition, we also arrange workshops, conferences and demonstrations of non-toxic printmaking. 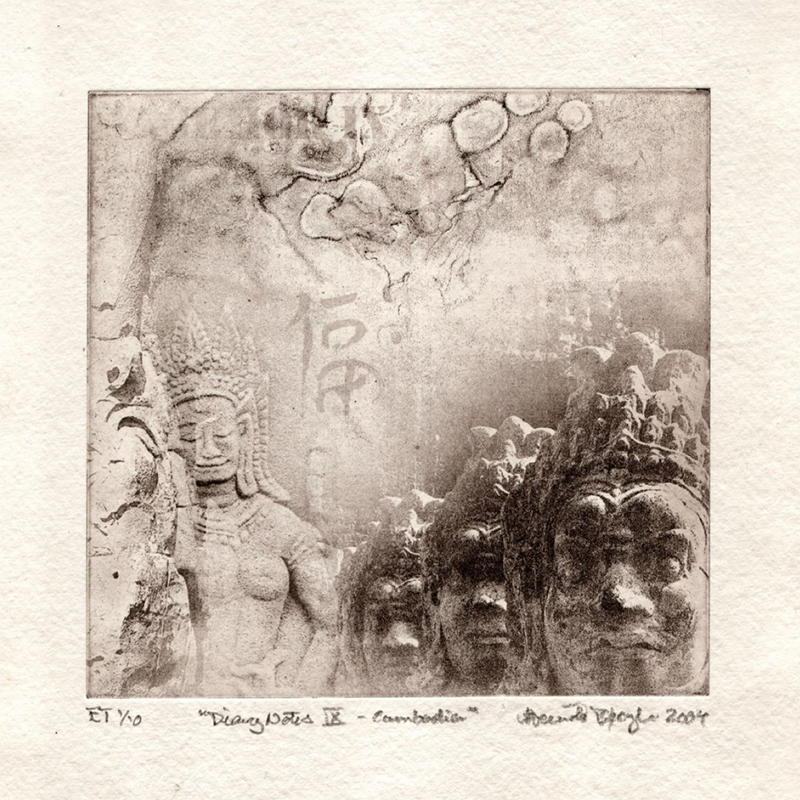 Sophie: What do you think needs to happen for the non-toxic printmaking movement to grow further?
Henrik: As I see it, it requires local “fiery souls” who can see an idea in communicating the message and who are qualified to make workshops. I am sure that among the younger printmakers the interest is present, but unfortunately the university teachers are hesitating, mainly because of conservatism but also because many of the universities already have the necessary safety equipment and evaporation systems that make it safe to use the traditional material. This means that you cannot blame the university nor the teacher. 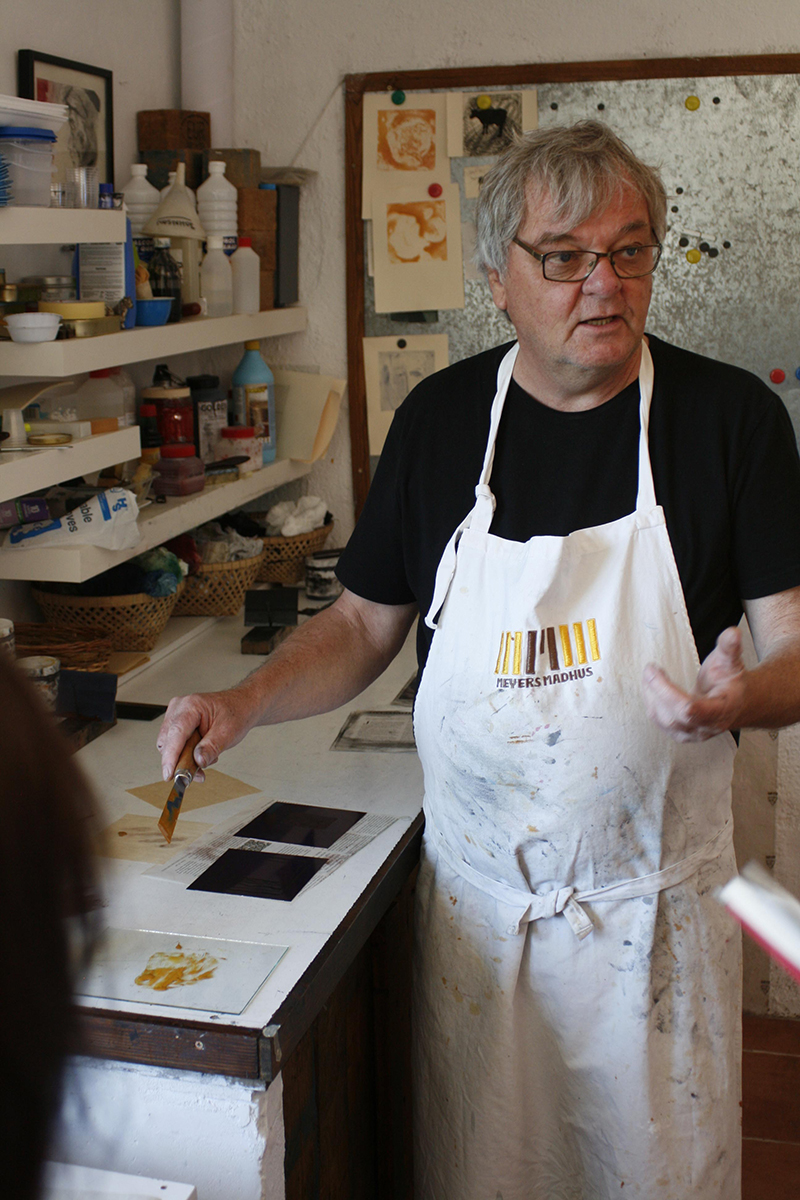 Henrik Boegh during a demonstration at his studio in Spain

And here we have a key problem: it is correct that you can work safe if you have these necessary safety equipments and evaporation systems, but imagine what the students will do when they have finished the University and only learned to work the traditional way? They will of course continue to work with the traditional materials and techniques, but in unsafe environments, since they cannot afford to build up the necessary safety equipments and evaporation systems in their studios. And that would not have been necessary at all if they had learned the non-toxic methods.

Sophie: What are some of the main challenges in order for environmentally minded practices to become the norm in printmaking?
Henrik: A good idea would be to arrange workshops in art schools and universities or send the teachers on workshops. On my workshops in Spain and Denmark, over half of the participants are teachers on art schools and universities from all over the world. 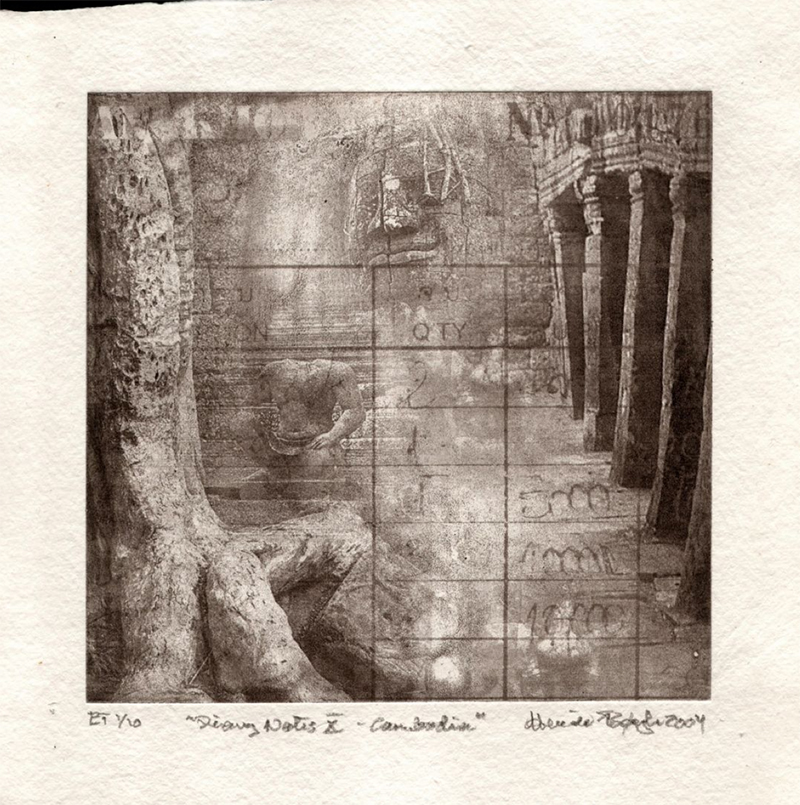 Sophie: Can you talk about some of the key innovations in this field?
Henrik: The introduction of the acrylic etching grounds were nothing but a revolution, not only because they work for the purpose but especially because they made it possible to eliminate all the toxic solvents and materials from the studio.

Working with photopolymer plates and photopolymer films in printmaking meant using digital positives. This has built a bridge to the younger generation, who are used to working with computers, computer generated stencils, photography, etc – and not so much with pen and paper. This is not only completely non-toxic but also an entrance to the world of fine art printmaking for this goal group. 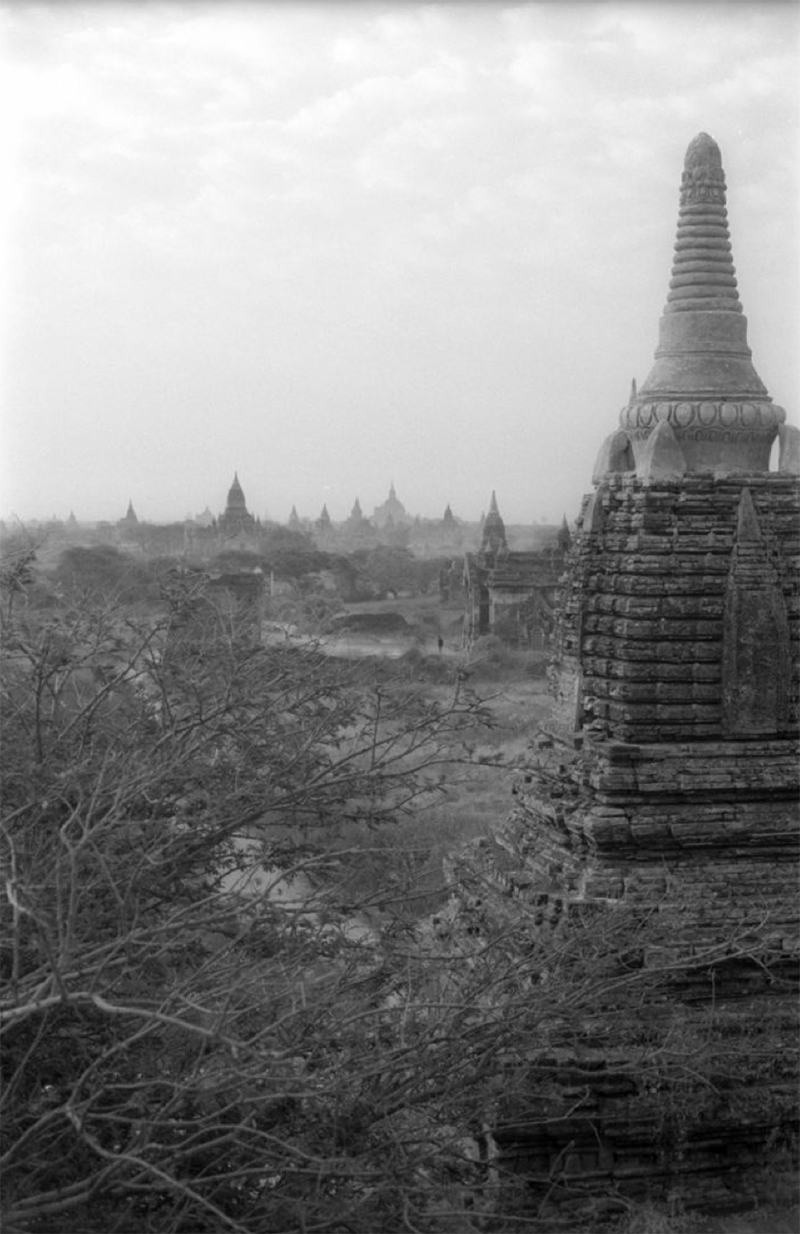 Sophie: What are some of your favourite (environmentally sound) processes & materials to work with?
Henrik: My personal favourites are photopolymer film, solar plates and spray on aquatint. 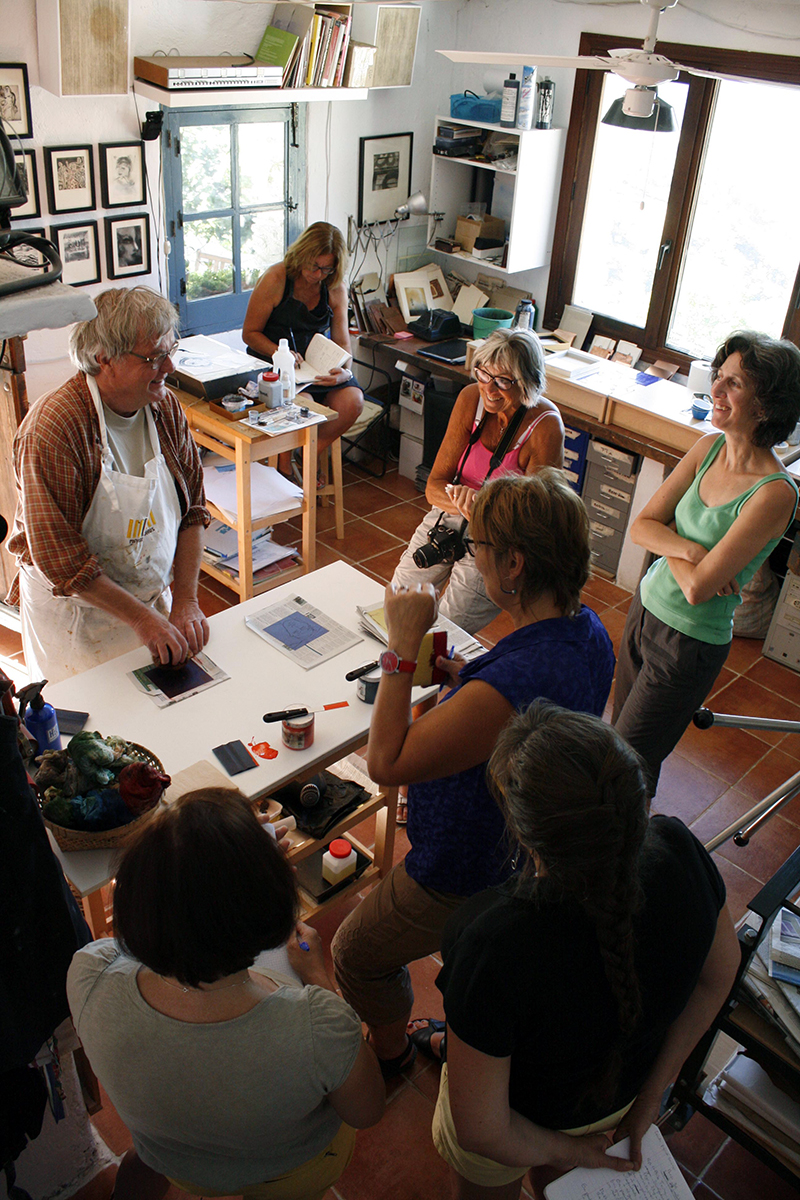 A workshop and demonstration at Henrik’s studio in Andalusia, Spain

Sophie: What advice would you like to give to an artist or studio who is looking to explore safer & environmentally sound alternatives to traditional printmaking?
Henrik: Start with a good workshop instead of trying by yourself and get a lot of problems with no answers. Send a person from the studio on a workshop or arrange one in the studio. You are always welcome to come to Spain. This year, for instance, I did a workshop in the University of Andes en Bogotá, Colombia, for university teachers in printmaking. The workshop was a result of having one of the professors participating on my workshop last summer in Spain. One professor converted the studio to Non-Toxic techniques when he returned, I came over and did a workshop in Colombia and now they are all teaching Non-Toxic Printmaking. 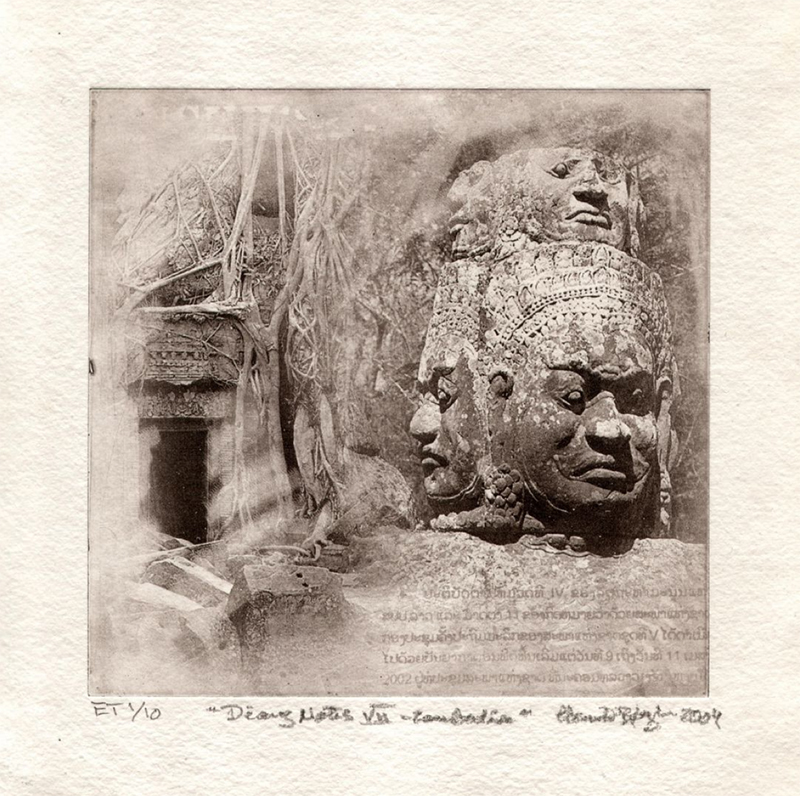 Sophie: Any upcoming projects or news?
Henrik: I consider my work with spreading the message of non-toxic printmaking as my personal mission and humble contribution to a better world – so I just continue.

Upcoming workshop from October 8th – October 16th 2016 in the Andalucían mountain village of Capileira, in the Sierra Nevada mountains. Henrik Bøegh offers international workshops in Non-Toxic Intaglio in his printmaking studio in the lovely little Andalucían mountain town of Capileira, in the Sierra Nevada, Spain. The spoken language is English, Spanish, German, Danish according to the participants origin.