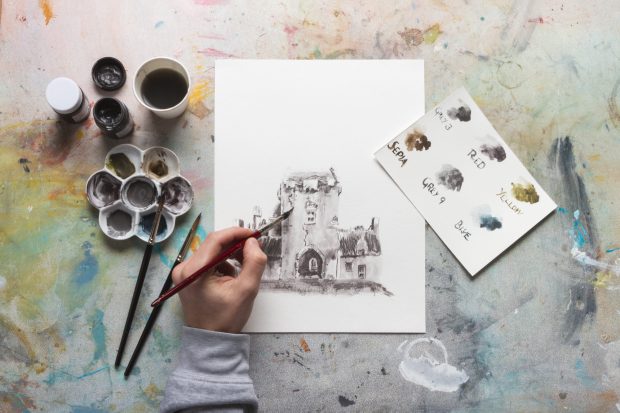 Derivan Liquid Pencil is an innovative product which can be used to create graphite-style marks on watercolour paper, but which is applied with a brush. Depending on the brush used, a wide variety of effects are possible. If you apply it with a small round brush or a rigger, the effect is similar to a fine graphite line drawing. If it is applied with a larger brush, the effect is similar to an ink or watercolour wash. This allows artists to circumvent the often laborious process of shading or hatching large areas by hand. 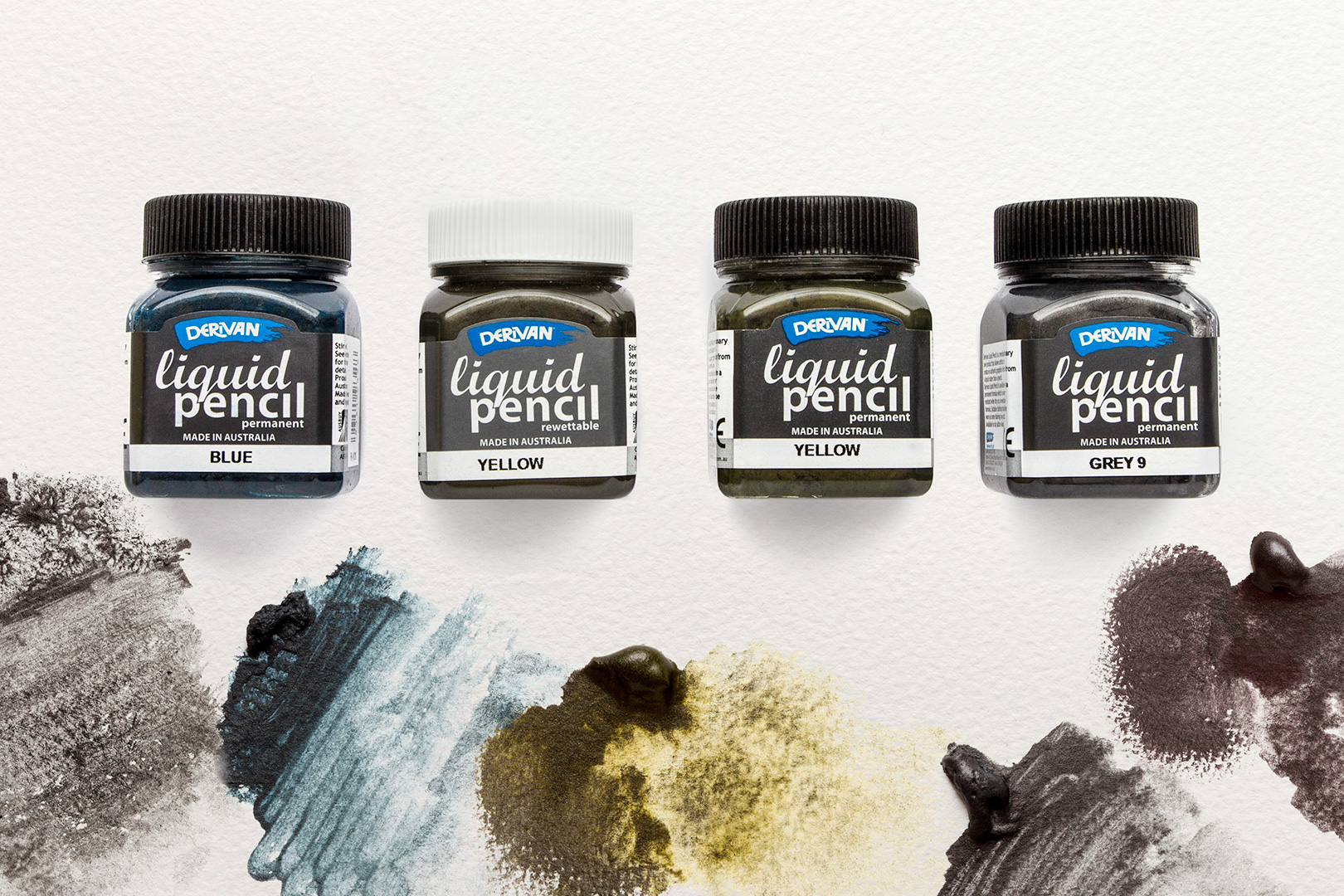 When we first received Derivan Liquid Pencil a couple of years ago, we asked a few artists who work either in graphite or with dip pens to try it out. In the resulting article, Liquid Pencil: Paint with Graphite, the artists were mostly positive about Liquid Pencil, though Anna Davies remarked that she found it difficult to work with using a dip pen.

I have to say that I found the same thing. Straight from the tub, Liquid Pencil is a creamy, almost gooey consistency. You have to thin it with water to get it to flow, and it didn’t seem to want to flow freely from the nib of my pen. I found it far more practical to use Liquid Pencil as a watercolour: to thin and mix the colours on a palette, and to apply them with a range of brushes.

I started out with a sketch in pencil, imitating a warm pen and wash sketch of a town gate in the style of Rembrandt (it might be by the man himself, but I couldn’t find evidence of this). It was only half-way through the process of setting out the main contours of the image that I realised I was drawing faintly, as if I was preparing for a watercolour. In this case, I thought, it didn’t really matter if the preliminary pencil drawing was visible through the paint, since the paint was itself graphite. 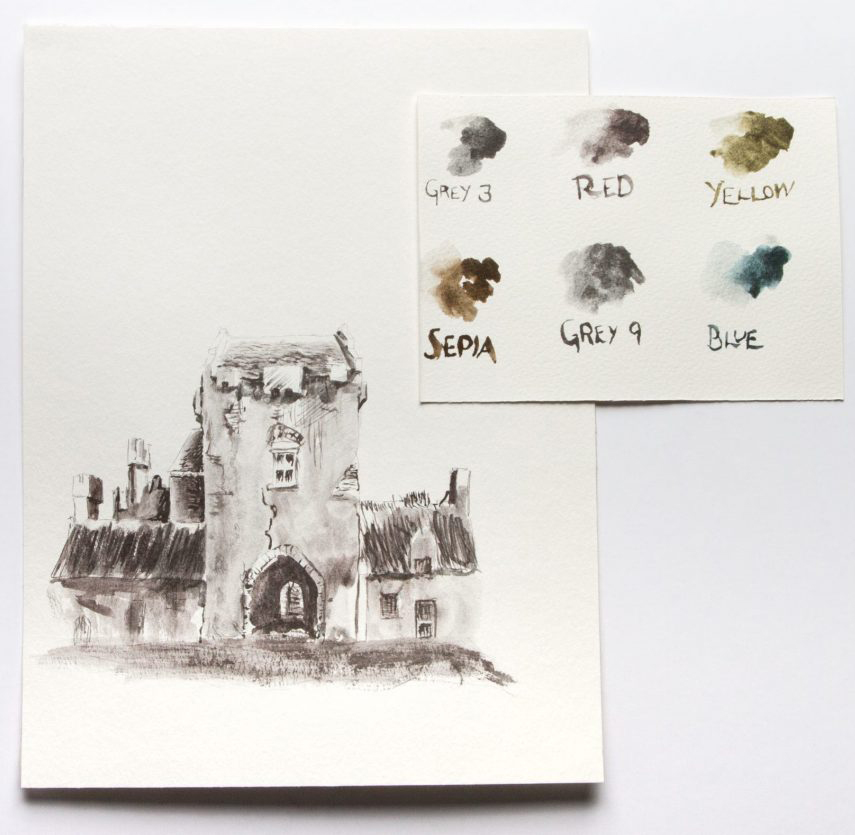 Once I’d finished my sketch, I added some darker tones with a fine brush to the very darkest areas of the drawing; cracks in the masonry, machicolations, the areas of shadow under arch of the gatehouse. For this I used a mixture of Grey 3 and Grey 9 from the Derivan Liquid Pencil Permanent range. According to Derivan, the graphite powder used in Liquid Pencil Grey 3 is mined in China and has ‘a partially formed structure that contains additional compounds’, whereas the graphite in the Grey 9, which comes from Sri Lanka, ‘has a more uniform chemical structure that imparts a silver metallic sheen to the finish.’ In my opinion, Grey 3 is darker (and perhaps slightly warmer) than Grey 9, which has silvery-blue tones at lower concentrations, but the difference isn’t enormous.

I should mention at this point that all six shades of Liquid Pencil – Red, Sepia, Blue, Yellow, Grey 3 and Grey 9 – are available in two formulations, ‘Permanent’ and ‘Re-wettable’. Permanent Liquid Pencil colours dry waterproof, like acrylics, while Re-wettable colours behave rather more like watercolour. It’s useful to have both, because you can then make your preliminary sketch in the permanent colours and wash over this using the watercolour without causing your preliminary drawing to smear or bleed.

After the Permanent colours had dried, it was a really quick process adding a light wash, this time in Grey 9, to give the buildings some shape. This is where the Liquid Pencil started to make sense to me. You can shade a large area in just a few seconds, and the colour selection makes it possible to mix your own tones. I really liked the look of Grey 3 with a hint of Red or Sepia. (Used straight from the tub, Sepia is a very nostalgic sort of a colour: it resembles the warm brown of faded iron gall ink.) It might take some getting used to if you aren’t a painter in watercolours, but Derivan Liquid Pencil offers a really quick and effective means of adding form to line drawings.

Both Permanent and Re-wettable colours of Derivan Liquid Pencil can be bought at Jackson’s.