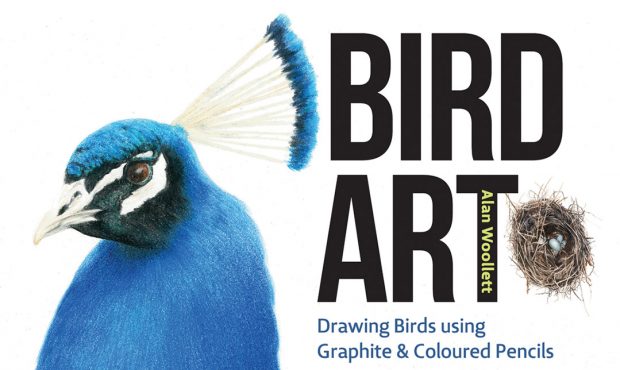 Ray Scally is a prolific illustrator of ornithological manuals and monographs, whose sketches of British and American birds (made in pen, pencil and watercolour) have earned him a large following. When Alan Woollett’s new book ‘Bird Art‘ arrived at Jackson’s, the first thing we did was seek Ray’s opinion on it.

On being asked to review a book on Bird Art, I immediately thought of flicking through pages showing the usual recipe of circles and shapes gradually interlinked by a myriad of lines to create a bird’s profile, with stuck-on beaks and feet. I was pleasantly surprised to find a book that was more based on the techniques of the medium than the image itself. 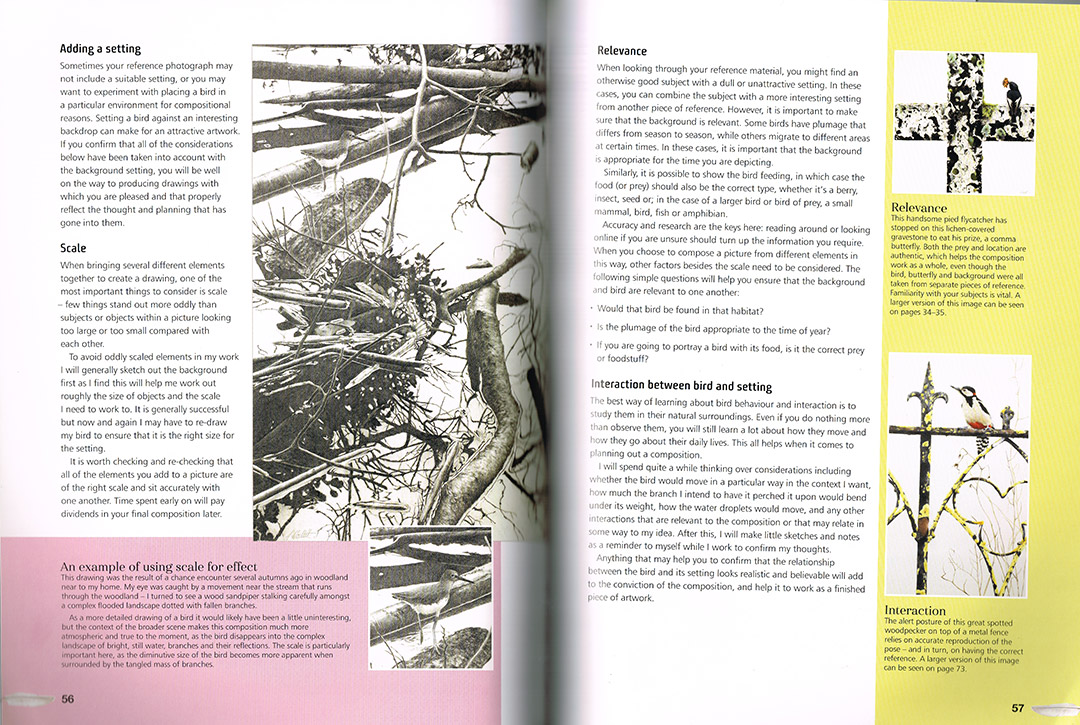 ‘Bird Art’ is split into 3 main sections; firstly the introduction, comprising an insight into materials and watching birds; secondly general chapters on creating a drawing, dealing with composition, colours, texture etc.; and thirdly ‘workshops/ tutorials’. The level of information in each section was concise and to the point. I found the section on materials very useful as the author specifically named the manufacturers of the various pencils that he used and left the reader with no doubt about the quality of the materials that were necessary. The old adage of ‘a bad workman blaming his tools’ is only half true when it comes to illustration, as using good quality materials and papers does have an impact on the final outcome. 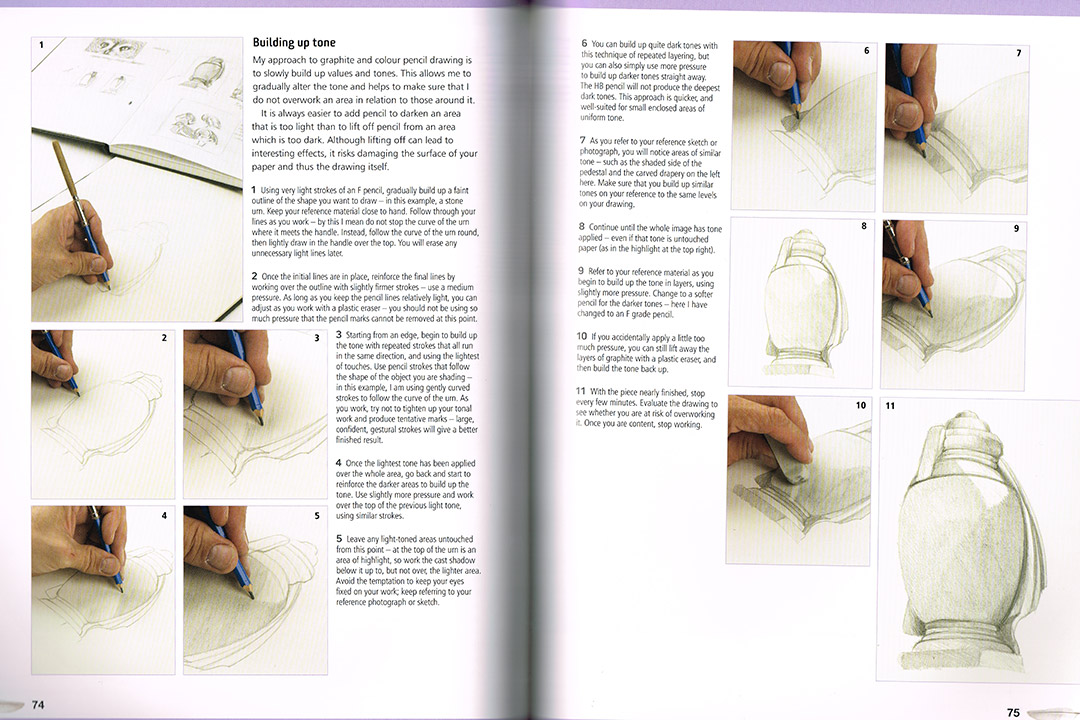 The introduction section touched on all aspects from birdwatching equipment, photography, and watching birds, to the importance of sketchbooks and making notes as you observe.

The ‘Creating a drawing’ section was very informative both for the novice and more accomplished artist. It covers certain pitfalls that can be found in many finished art works such as making sure your subject is in scale with its surroundings and, if shown with prey or food, to make sure the subject actually eats what is shown. I particularly like the inclusion of the ‘key questions’ summary box in the composition chapter, which is a great résumé of the key issues of that chapter. It would have been great to have more of these throughout the chapters to give precise reminders of certain important points.

The chapters covering the use of photographs as reference material were well written and very useful. The practice of recomposing an image on a reference photograph is not touched upon in many other books and it was good to see a worked example with the author’s simple and precise explanation as to why he changed the original composition.

The final sections or tutorials were very informative. It was very comforting to me to see that I am doing things right as many of the techniques used to compose the pictures are ones I use myself, especially the use of overlays! The use of close-up detailed photographs to show certain points was useful, particularly as they also included the artist’s hand and pencil for scale. Other pluses in these sections were the materials list for each drawing and the odd tip box next to the close up photographs. The tutorials are split into useful sections starting with the reference material, which was different from chapter to chapter, some multiple photos and some a single photo reference. 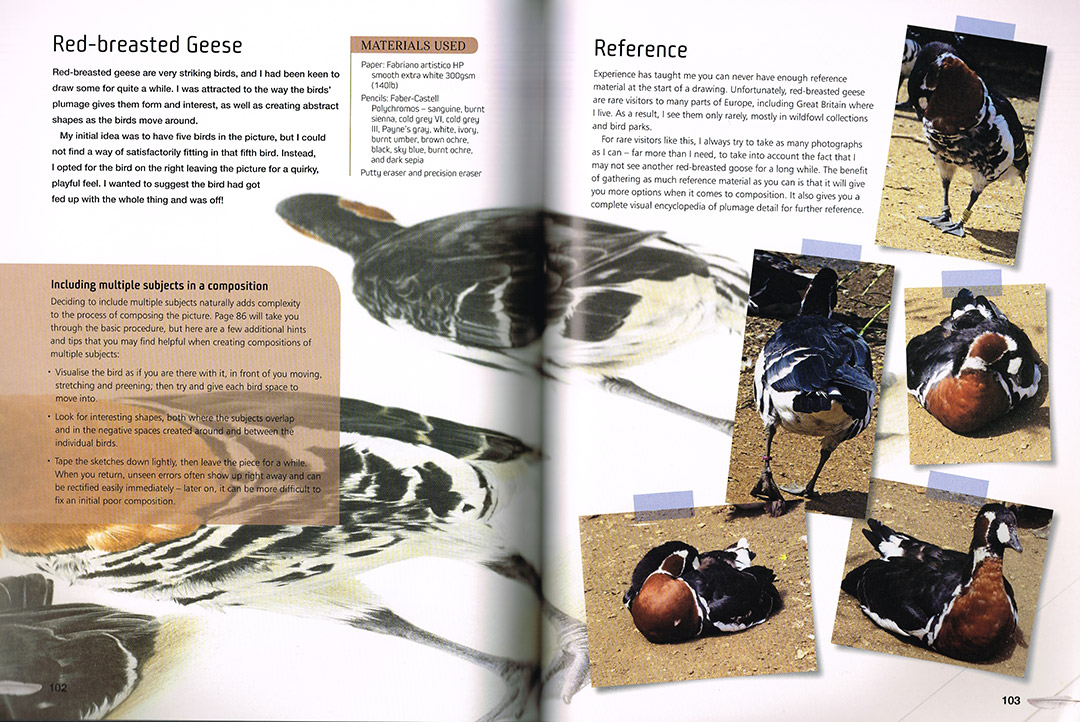 Each tutorial consists of three stages. ‘Stage 1 – The initial drawing’ gives a very detailed insight into the preliminary drawing, even down to the grade of pencils used to transfer the image to the finished drawing sheet. I found all the sections sufficiently detailed that even the novice reader wouldn’t have to stop and pause to work out the steps or try to figure out how something was achieved. ‘Stage 2 – Creating an order of work’ was the author’s own way of planning the way he would tackle the artwork, though he does accept that this probably varies from artist to artist. ‘Stage 3 – Mark making’ gives a numbered guide to putting the colour on the paper and building up the finished drawing, featuring quality close-up photographs of various areas of the picture. ‘Stage 4 – Completion’ shows the finished artwork. I would have liked to see a mount on some of the completed artworks as I wasn’t always sure whether we were seeing the entire image or whether the edges of the sheet had been cropped.

In summary this book is not just for people who would like to draw birds. The techniques shown would benefit any person wishing to master coloured pencils. As an illustrator myself I started to read this book as a reviewer but after several pages was consumed, particularly in the workshop section, as to the artist’s method and technique in creating a finished image. My only criticism is a small one, which is that I would have liked to see more of the summary boxes which appear in the chapter on Composition.

The insight into composition, use of photographs, and creating the final image could be used for any medium. This is an excellent book all round, and relevant to the use of pencils for many subjects – not just birds.

Ray Scally is a birdwatcher and international bird illustrator whose work has appeared in many ornithological journals and books. He is well known for his recent work illustrating the two Birding Frontiers Challenge Series’s best-selling identification books, ‘Autumn’ and ‘Winter’. Other publications include ‘The Birds of Spurn’ by Andy Roadhouse, ‘The Ultimate Site Guide to Scarcer British Birds’ by L G R Evans, ‘Rare Birds Where and When Vol. 1’ by Russell Slack and ‘British Birds Magazine’ amongst many others. Ray exhibits annually at the Spurn Migration Festival and is currently working on illustrations for Cape May Bird Observatory in the US, having recently completed a series of drawings for ‘The Birds of Central Park, New York’. When he’s not at Spurn, Yorkshire, he can be found birding in his East Cheshire square/ Peak District Hills.

What advice would you give an artist just starting