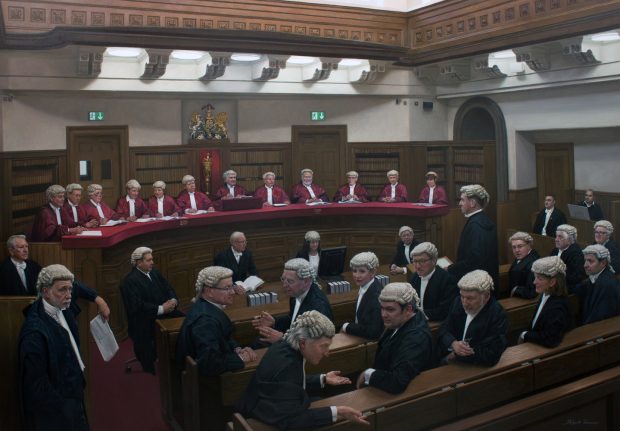 Mark Roscoe’s intriguing portrait of Eniola Sokalu was selected earlier this year as the winning artwork for Jackson’s Open Painting Prize. One of our expert panel of judges described the portrait as ‘powerful’ while another felt it had a ‘silky finish’ and liked the use of a seemingly domestic setting in which the portrait had been painted. As a member of the Royal Society of Portrait Painters, we wanted to speak to Mark to find out more about the people behind his portraits and his ability to comment truthfully on the reality of the human condition. 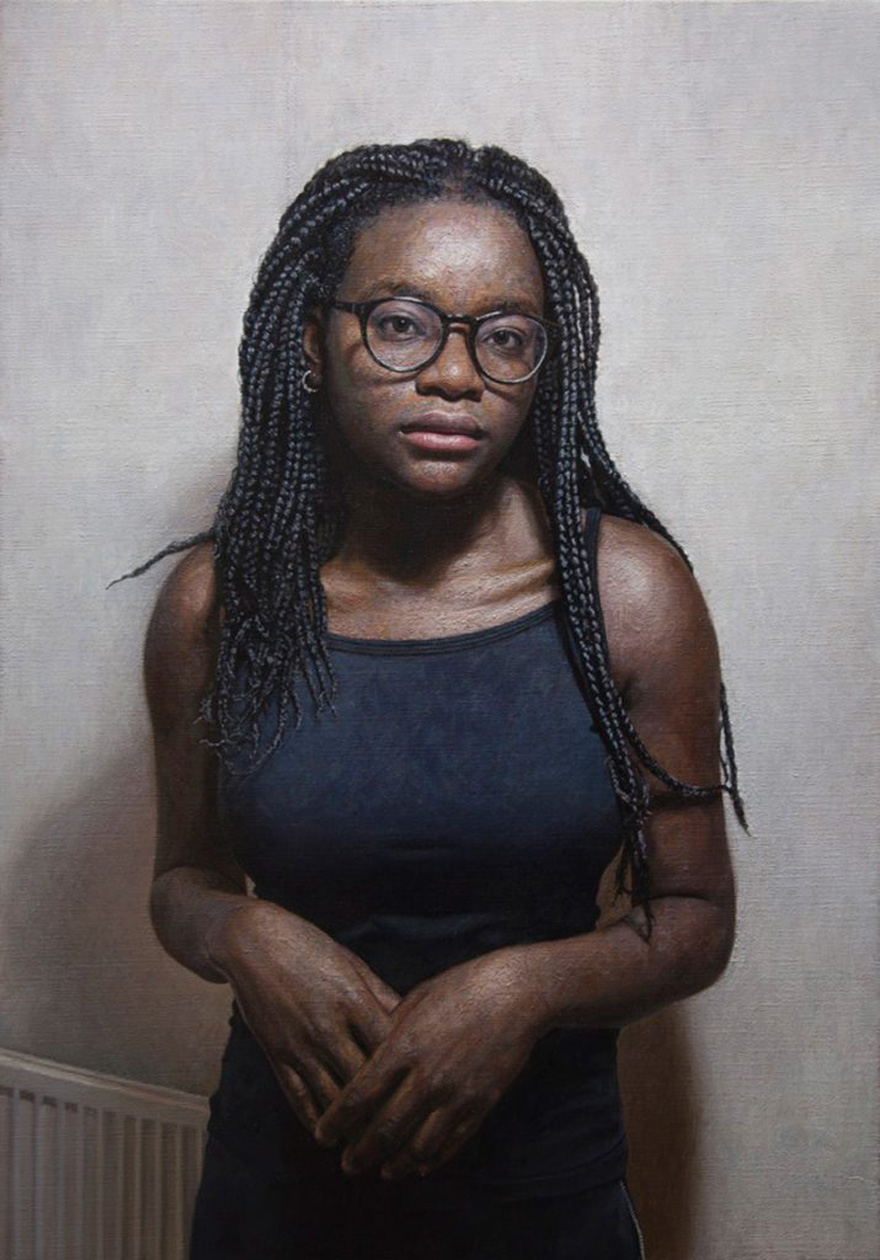 Christine: Your portrait of Eniola Sokalu won first place in Jackson’s Open Painting Prize, can you tell us a bit more about Eniola, what was it that inspired you to paint her?

Mark: Eniola Sokalu is currently studying Chemistry at the University of Glasgow, she grew up in London and her parents still live in Notting Hill. I first saw her in a painting by Jennifer Anderson on Twitter and I thought she would be suitable for a painting I had been planning. I was thinking about painting someone sitting on the Queens throne, someone unlikely, someone young, perhaps someone ethnic, someone other than you would expect to be sitting on the Queens throne. It may have been a little controversial but hopefully it would have said something about our everyday prejudices and misconceptions. My plan was to place Eniola on a large throne with a back drop of intricate symbolic patterns in gold leaf (Gustav Klimt style) but after the first sittings I decided to go another way. I did my best to make Eniola feel relaxed and confident during the sittings and I could have painted her in many different ways but occasionally I noticed a look in her eyes. She looked a little unsure and guarded. I asked myself, is this because of a cultural divide? which I wasn’t aware of, or was it simply because she was young and there was a middle aged man standing in her student accommodation wanting to paint her? Whatever it was I thought it was worth exploring.

Christine: You’ve painted some notable subjects within your career, is there anything in particular that draws you towards capturing recognisable faces?

Mark: Most of the people I paint are “famous in their field” types, successful people being honoured and remembered by their College or institution but they are seldom recognisable to the general public. When I’m commissioned to paint someone I must take into account three things, how I see them, how others see them and how they see themselves. The only way to make a great work of art is for the artist to paint his/her own vision but with this approach you risk falling behind with the bills. I try to combine all three elements with every commissioned portrait so that they are universally recognisable and to keep everyone happy. 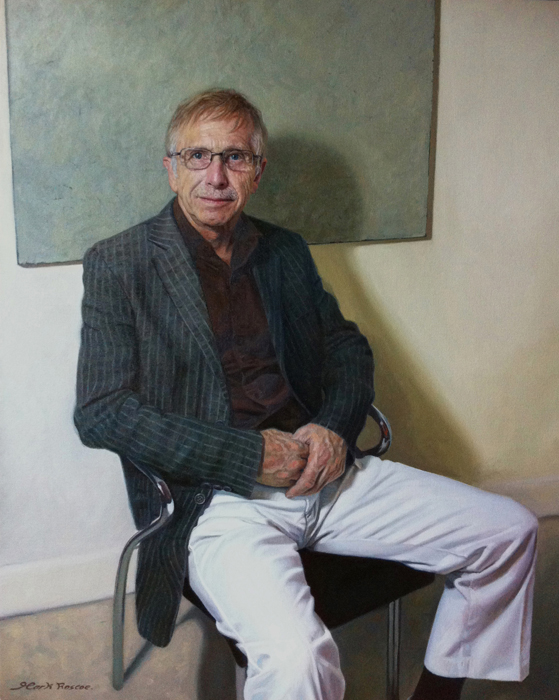 Christine: Your work is meticulously detailed, what is it about this way of working that you love?

Mark: I don’t see my portraits as meticulously detailed, certainly not by today’s standards of hyper realism. I paint details when they are important to the work but spending thousands of hours rendering every line, pore and hair follicle with exact precision is not for me, I can respect the effort that goes into it but it ends there. I see myself as painter of Realism, the way we are is more important than how we look.

Christine: How do you choose what to have in the background when painting a portrait?

Mark: Sometimes less can be more, it all depends on what you are trying to say. When painting Eniola I simply wanted to show the psychological, the interaction between artist and sitter. An official portrait commission for an Oxford College for example will often include the Warden’s official robes somewhere in the background or perhaps a subtle architectural feature to pin the portrait to the specific college. Often people don’t want to be defined by any one part of their life so we arrange a variety of memorabilia, important books, photographs and items of personal significance within the composition. In a few centuries from now the props will read as clues to who the person was. 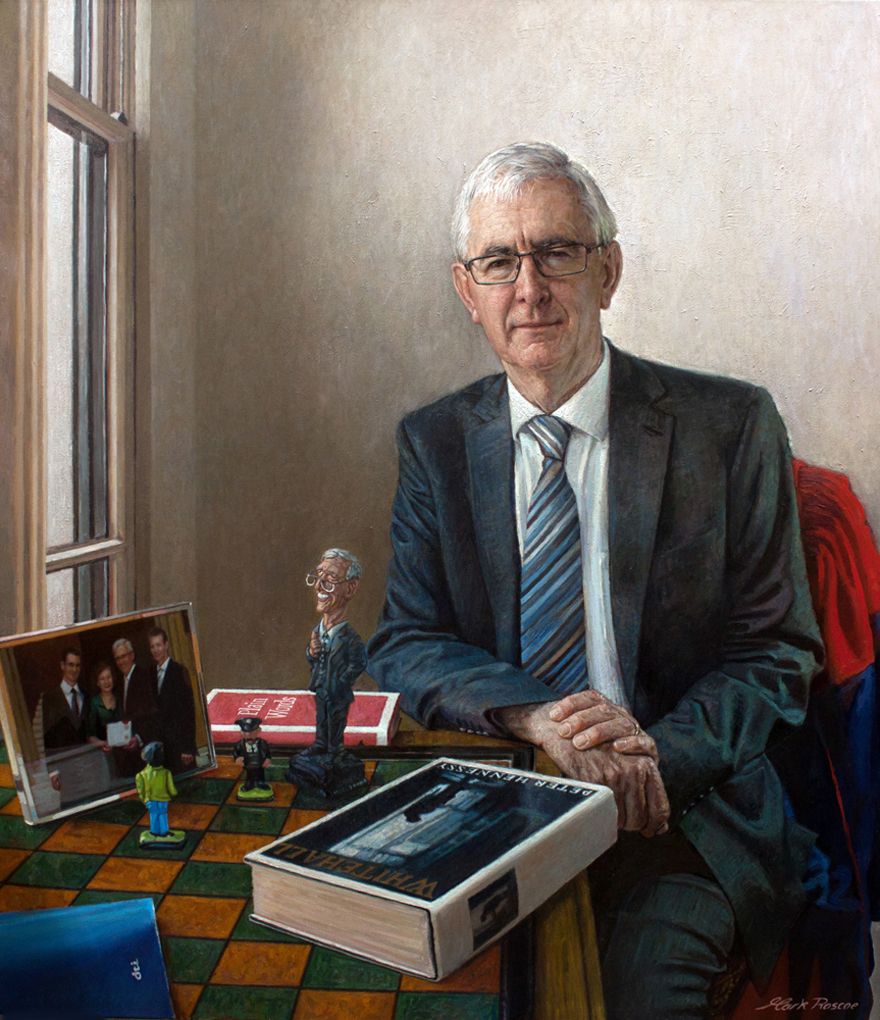 Christine: Is there a particular expression or emotion that you find challenging when painting a portrait?

Mark: I don’t like to paint expressions which can only be recorded by a camera, like a wide smile full of teeth for instance. If you must paint from a photograph you should paint an expression that could be realistically held during a life sitting. A wide smile shows a split second in time, a single moment, for me it has no depth. The best portraits are always a little melancholy because the artist is truthfully commenting on the reality of the human condition. If I’m painting a portrait commission I’ll go for a subtle expression like a Mona Lisa smile. 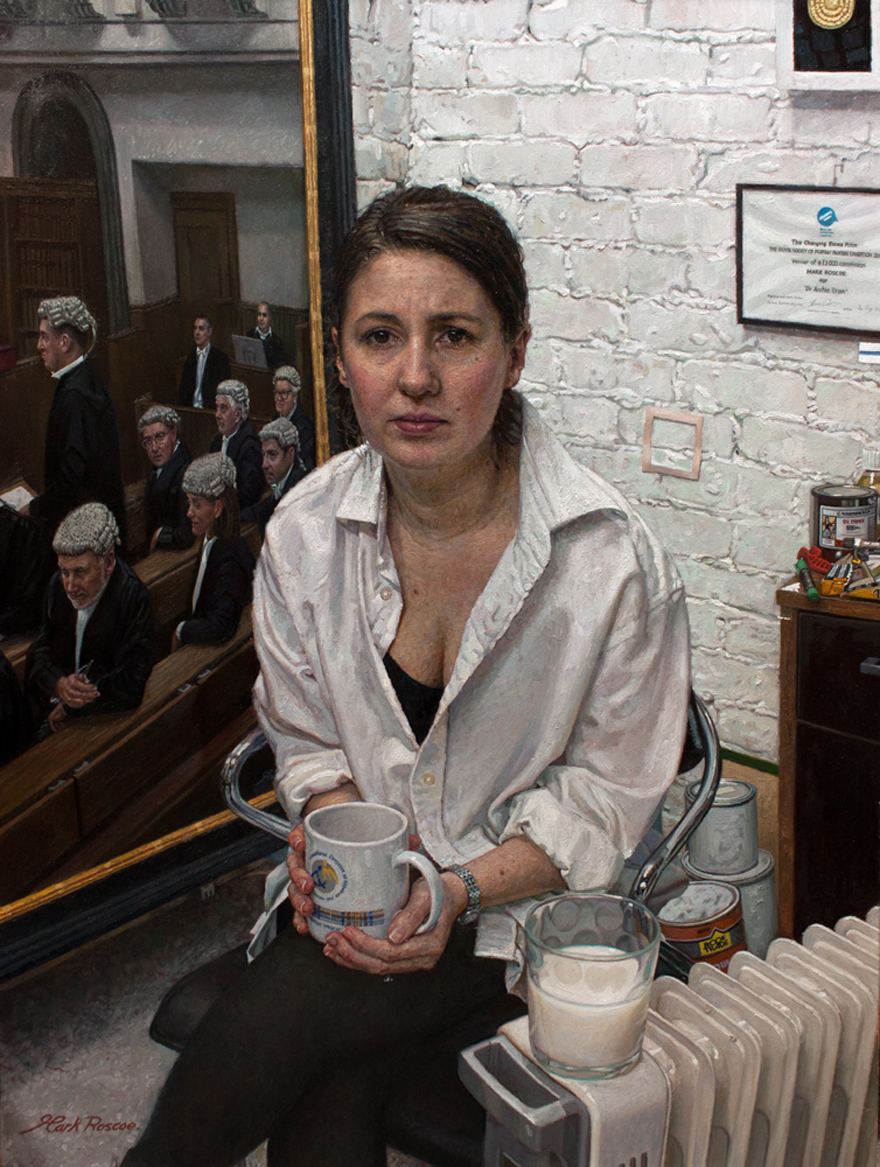 ‘Clare in the Studio’ by Mark Roscoe. Oil on canvas, 30x40in. This portrait was featured in the 2016 Royal Society of Portrait Painters Annual Catalogue.

Christine: Do you work from reference photos at all? Describe your process of creating a portrait from start to finish…

Mark: I can paint from life sittings or purely from photographic reference although I prefer a combination of both to get the most out of the sittings. Most professionals are too busy to sit for long periods of time for an artist and are relieved to hear that only a few photo sessions are necessary. When we have agreed on the composition, the pose and expression of the portrait I’ll use the “cheat method” I’ll draw small squares on the chosen photograph or collage of photographs with pen! draw larger squares on the canvas with pencil and transfer the details square by square, people call it painting by numbers. I call it the cheat method but it’s really just one technique to accurately transfer the details from a photograph onto a canvas. The process saves time and mistakes but in truth the mistakes are the best bits. Photographs aren’t the villain however, making the grid too precise is.

Christine: You work mainly in oils – is there a particular brand of oil paint that you like using most?

Mark: I’ve had a go with all types of paint, watercolour, acrylic, egg tempera but I always come back to oil paint as it allows me to paint without thinking. I always use Michael Harding oil paints, they are expensive but you get what you pay for. 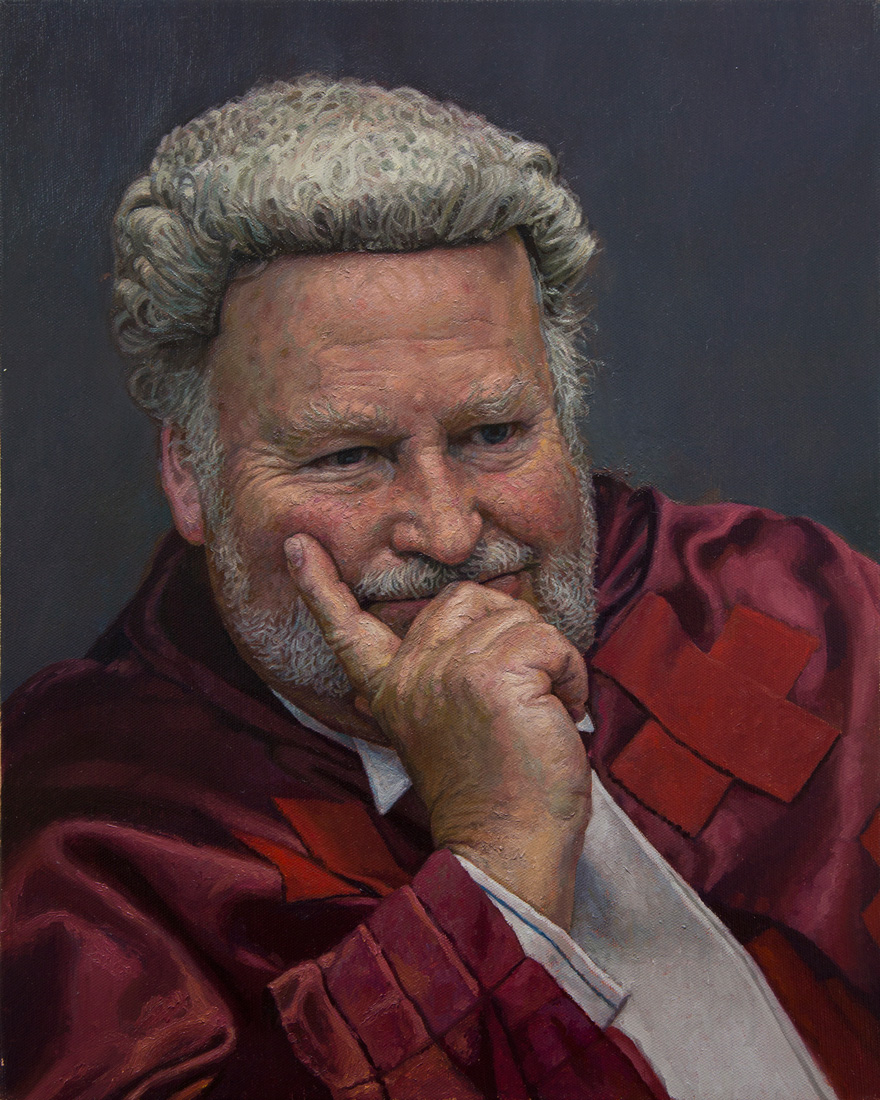 ‘Lord Menzies, Judge of the Supreme Courts of Scotland’ by Mark Roscoe. Oil on Linen, 16x20in.

Christine: Which artists do you take inspiration from?

Mark: Genuine artists! I’m not there yet, it’s in me, the work is in my head and going to explode very soon but in the meantime I’ve got lots of commissions to finish. A genuine artist comments on life and the society in which they belong, their reality. They refuse to sell out or compromise and will work doing any other job to pay the bills if necessary. I worked in a supermarket part time for ten years, four years through university then six years after to pay the bills while trying to establish myself. It’s very easy to make and sell pleasing to the eye commercial art, people buy the piece which will best match the living room curtains. That’s all fine and well but try selling a twenty foot glass box holding a pickled shark.

Christine: Who would you love to have the opportunity to paint in the future?

Mark: I’m a professional portrait painter based in the UK so my dream is to paint the Queen. I’ve seen so many awful portraits of her and feel it’s unfair that they had the opportunity and wasted it. If I were asked I’d want to make it the best of all time.

Christine: Where can we see more of your work online and in the flesh?

Mark: I’m a member of the Royal Society of Portrait Painters so you can see my work in the flesh each year at their Annual Exhibition at the Mall Galleries in London.

You can also view some of my portraits on my website www.markroscoe.com

Or on the Royal Society of Portrait Painters website