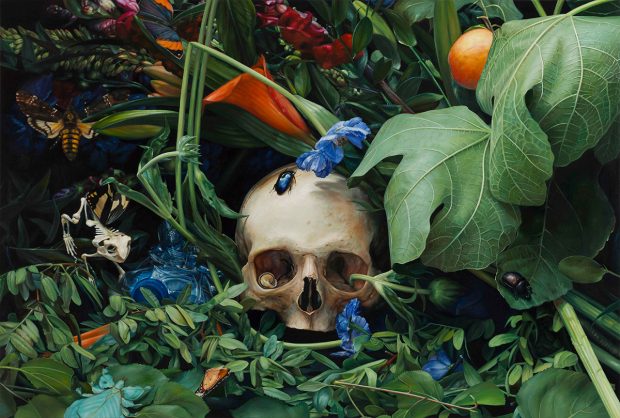 Exhibiting alongside artists such as Marc Quinn and Michael Craig-Martin in the Guildhall Art Gallery’s largest ever upcoming exhibition, Nature Morte, Cindy Wright is taking the contemporary painting world by storm. Her unsettling still-life oil paintings modernise classical Vanitas techniques to make, as described by the previous director of the Las Vegas Art Museum Libby Lumpkin, ‘arrestingly claustrophobic’ imagery. By juxtaposing domestic objects then rendering them in oils with exceptional skill, she turns the mundane into sensuous and disconcerting imagery that forces viewers to reconsider their every-day.

Debbie Chessell: Hi Cindy, thank you for talking to us! Please could you describe the works you’ve made for Nature Morte? Was the series of paintings influenced by any particular classic still life traditions?

Cindy Wright: The painting [below] that was chosen by Michael Petry for the Nature Morte show shows a fish in a bowl, it’s a salmon and it has been pushed into a fish bowl that is intended to host a goldfish. The bowl is obviously too small for the fish, which makes us feel uncomfortable. I have always been fascinated by the 16th and 17th century still life tradition of which I can find lots of examples in the museums surrounding me in the Lowlands. 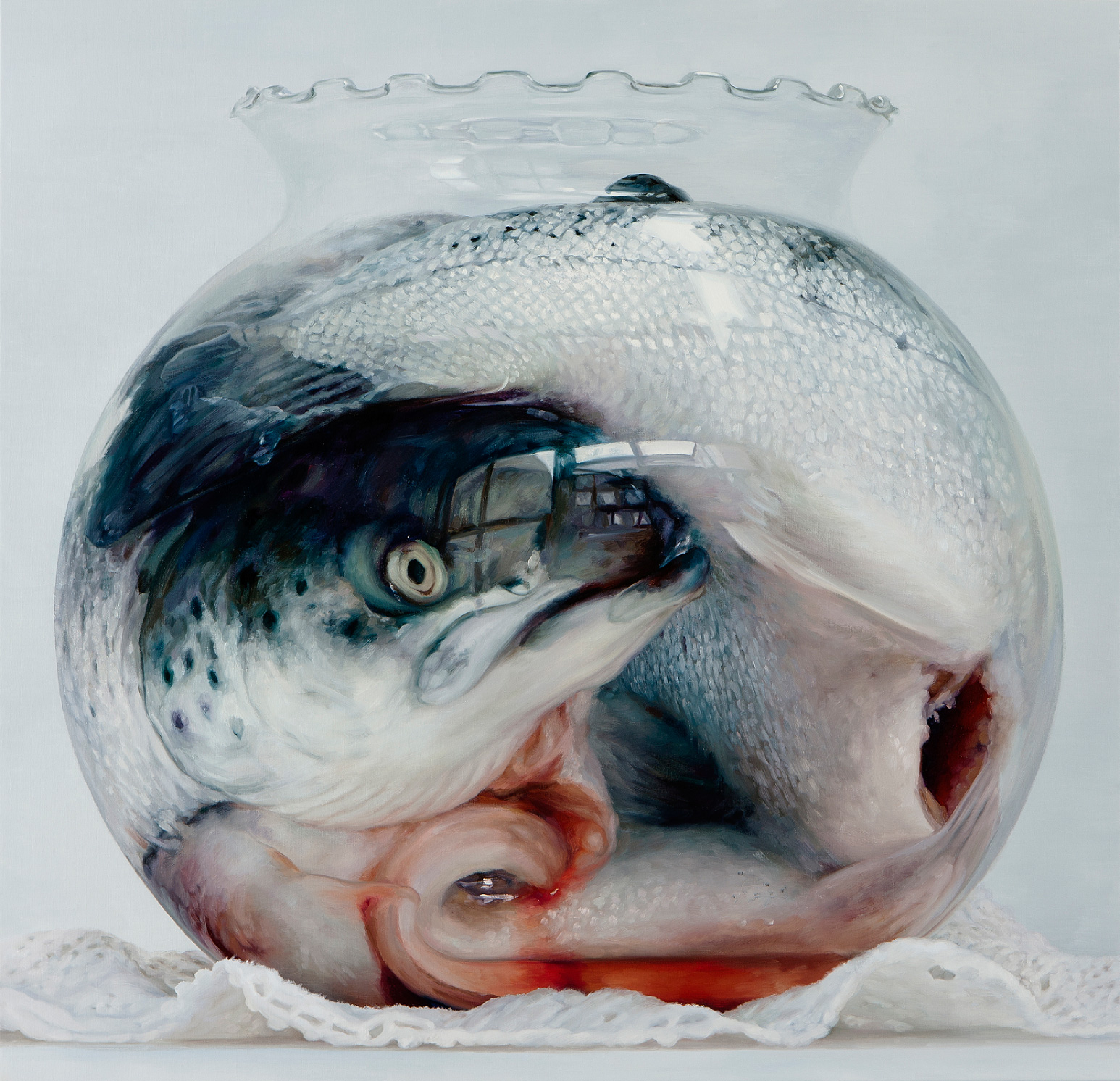 Your practice seems to play with many references to both contemporary and historical art works. A couple of examples that I particularly like include your recent painting Festoon of fruits and fly, 2016 which references the traditional Dutch still life painting by Jan Davidsz. de Heem, Festoon of Fruits and Flowers, and your slightly older work Untitled, 2005 which (correct me if I’m wrong) is a nod to Ron Mueck’s famous hyperreal sculpture, Mask II. When did you become interested in making this critique of art history?

As a painter it has always been important to me to look at other artists their work, specifically at art history. What were the works about, what did they mean at the time they were made, how were they painted, …? I have always been fascinated by looking at the painterly surface as well. One of the questions I ask myself is how to make these stylistic references and the Nature Morte content make sense to the time we are living in. When I was still a student, I went searching for the contemporary art that could fascinate me the most and I found the British Art scene dazzling at the time. Ron Mueck, Jenny Saville, Lucian Freud, Damian Hirst, …. they all swept me off of my feet. I guess I couldn’t hide the influence. 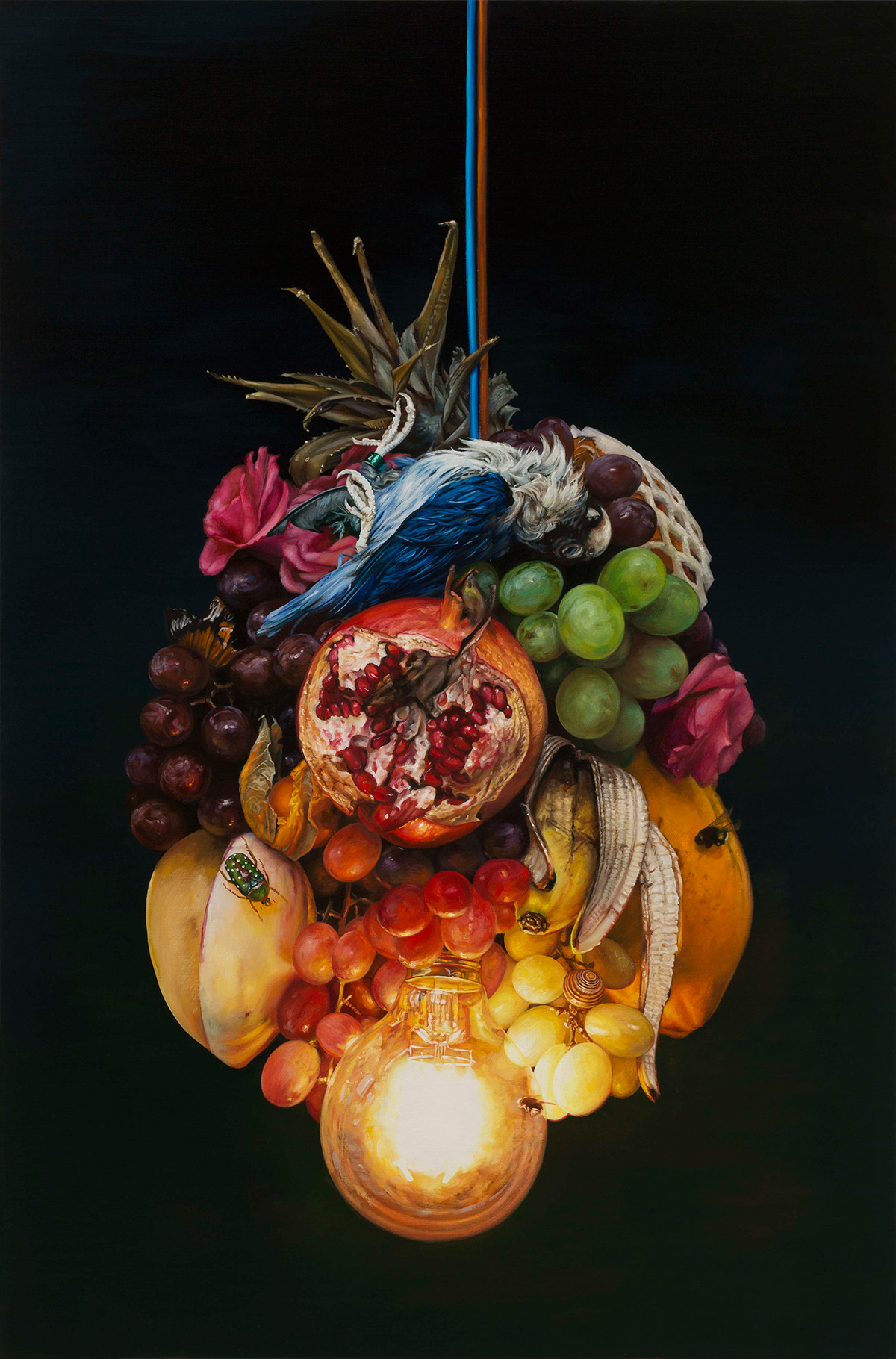 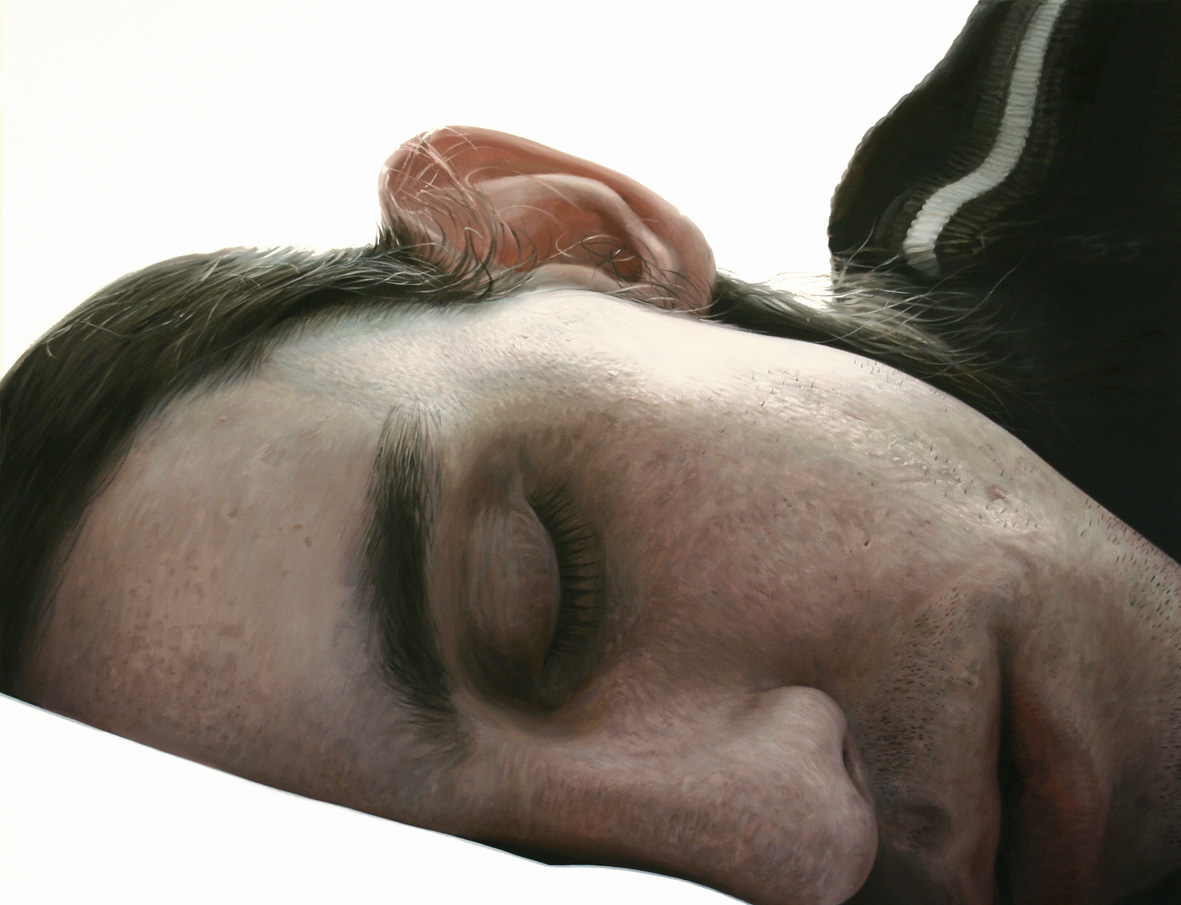 The compositions in your works are stunning – they’re jarringly powerful yet have so many fascinating subtle details. Can you tell us about how you chose and curate the subjects and details in your paintings?

As I mentioned before, I’m fascinated by observing surfaces, what does something feel like and how to translate this into paint, which elements/details are the most fascinating and powerful to interpret in oil paint. My macro lense helps me to watch things from a close distance. 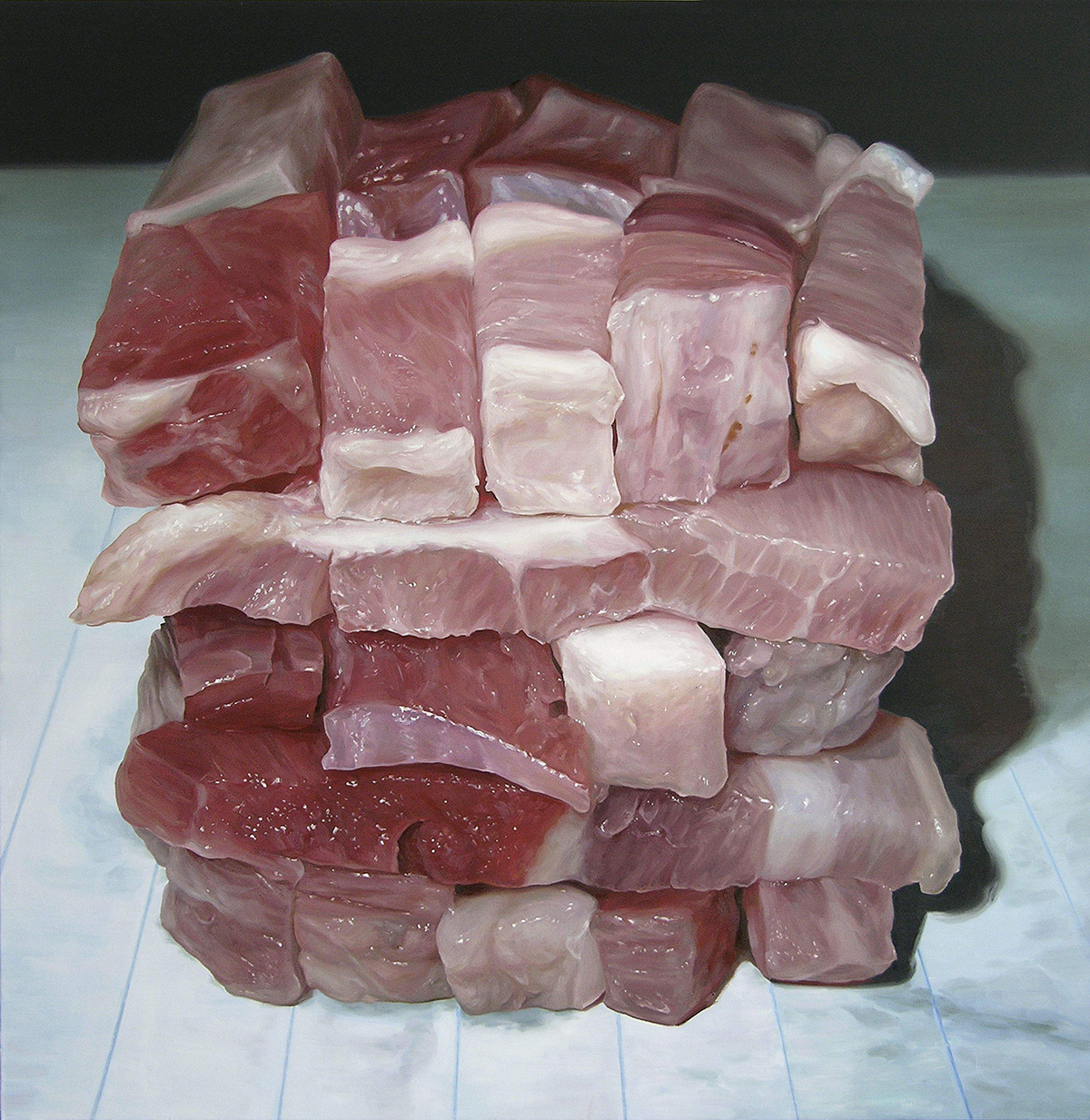 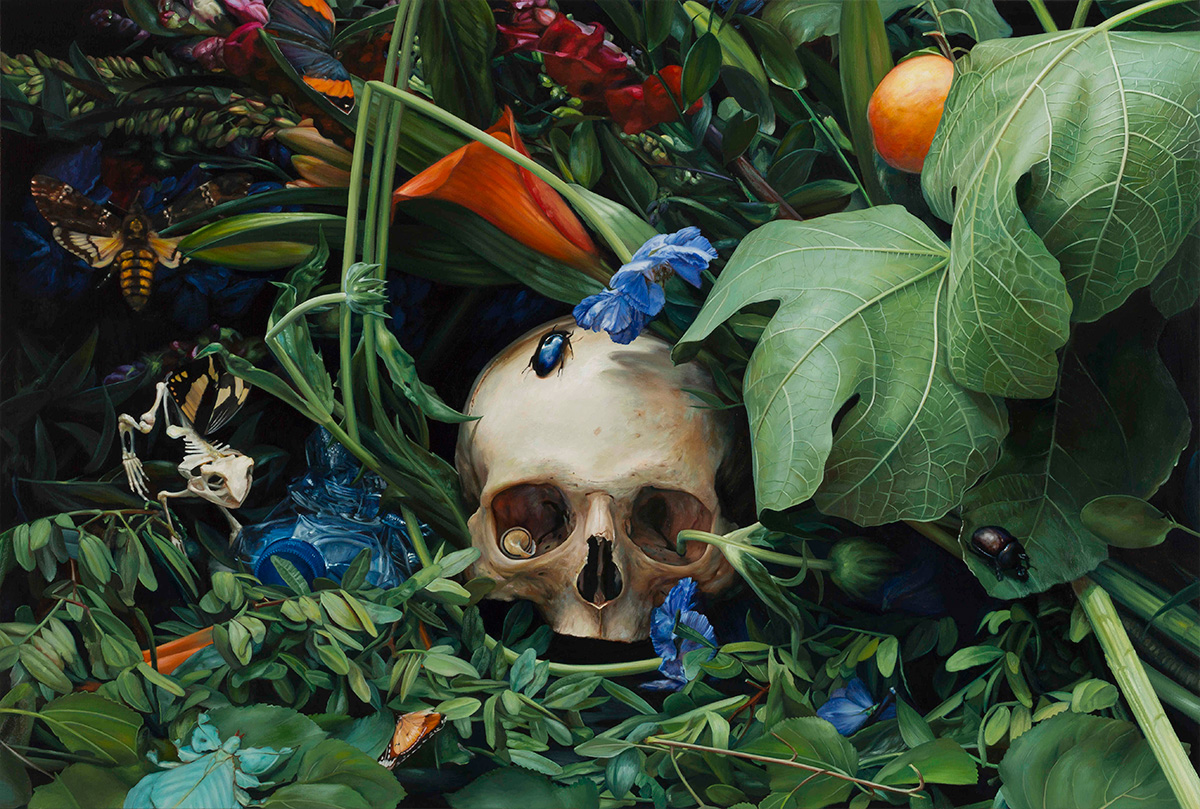 In your video interview with ArtLog you explained your work sits between realism and expressionism; your paintings appear hyperreal at a distance but become a sea of painterly marks up-close. Is it important to your work to sit between these two genres?

I believe it brings me an interesting counterpoint, it gives me a certain freedom. I walk back and forwards the whole time during painting, it’s almost meditative, I lose notion of my surroundings, but stay alert enough to make painterly decisions. I kind of like disappear into the painting. It brings a contradiction to the painting that is on one hand bound to what we recognise as a photorealistic image and on the other hand a painting about the formalities of painting. 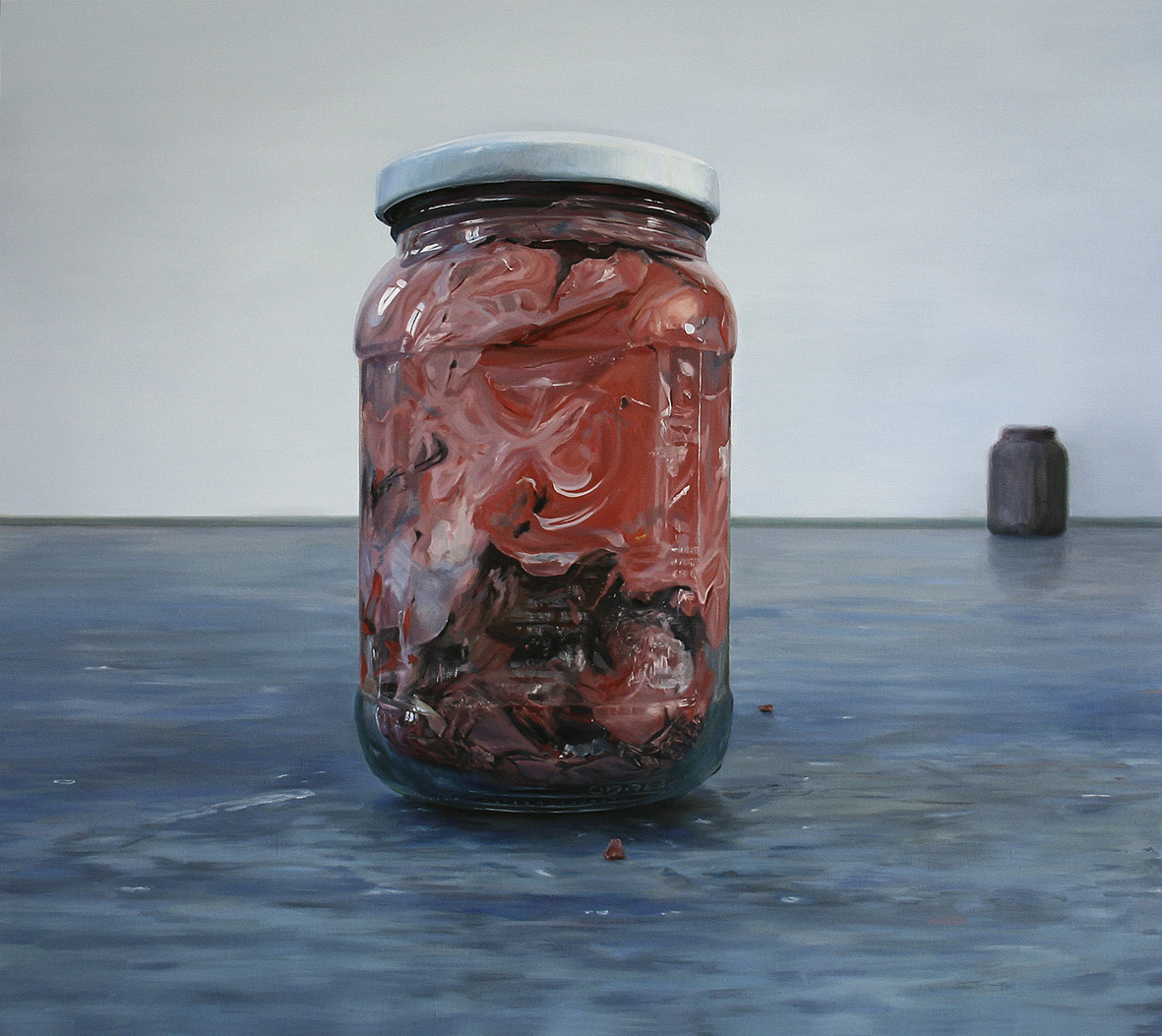 You also mentioned that you currently work from your own photographs as it stops the decomposition of your subjects from affecting your process and allows you to capture more detail. Do you think your experience of learning to paint from life as a student, before you began painting from images, helped your current work?

I believe it was very important for me as a student, it was absolutely necessary to be confronted with working from life before working from photography. Using photographs was the next step in my work, it gave me the opportunity to use a contemporary language that connected to my observational fascination. 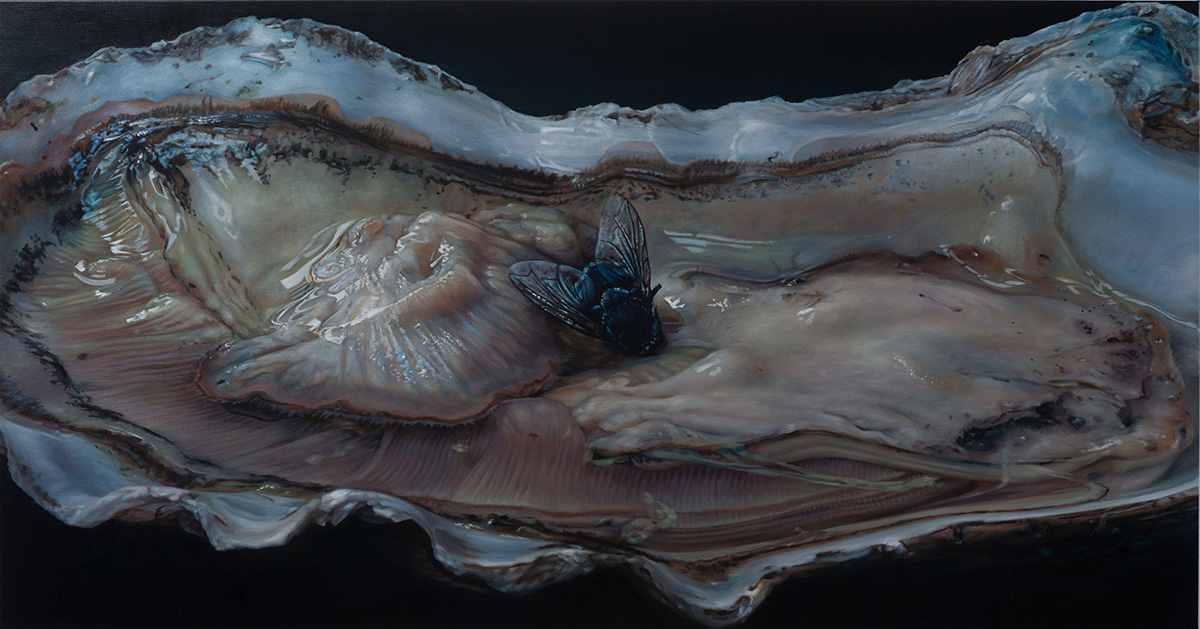 Would you ever display the original subjects as an installation? 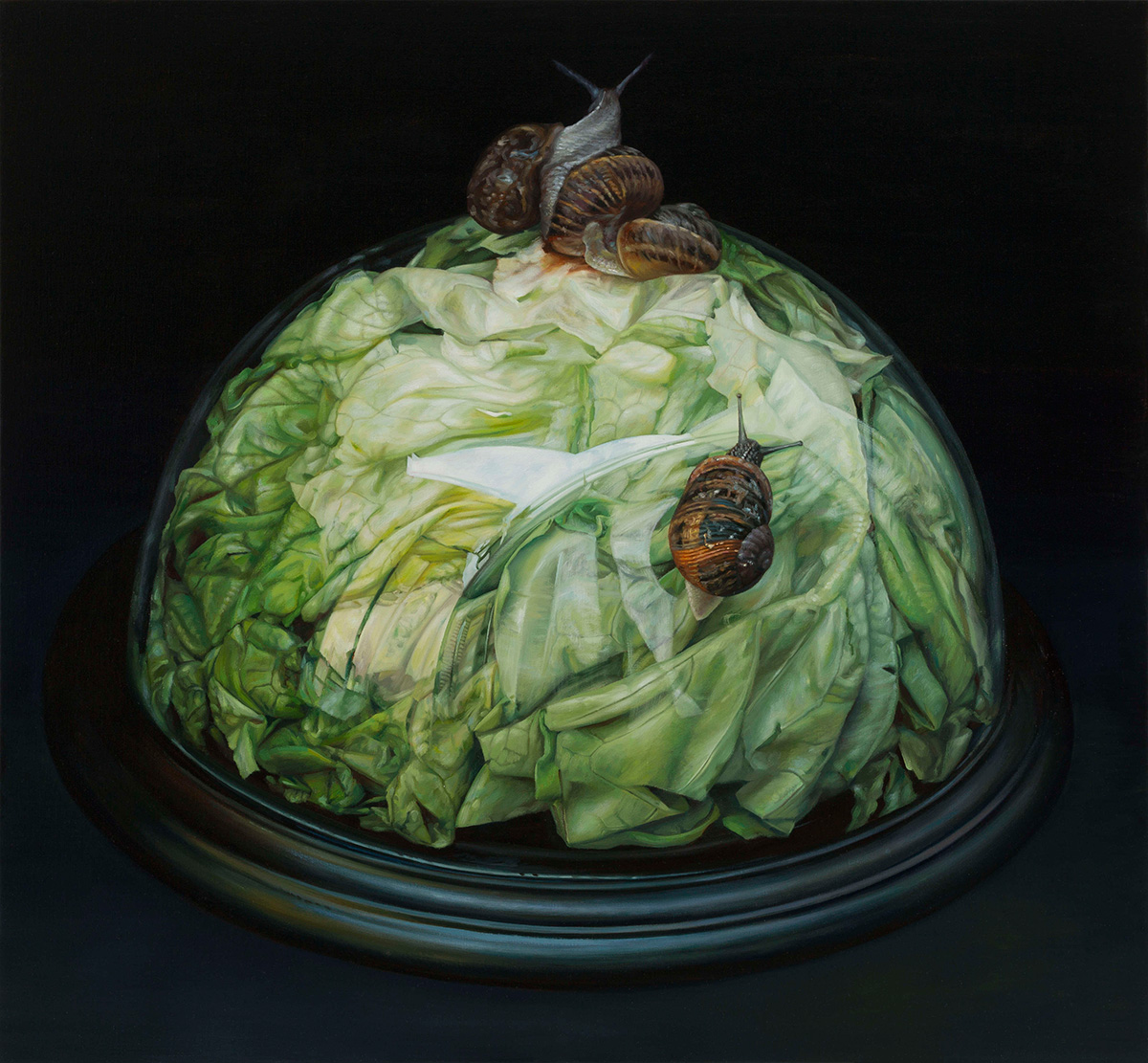 You’re an incredibly active artist – the number of exhibitions you’ve participated in over the last few years is staggering! Do you find participating in events helps your work develop?

I think it is a necessary part in developing my career as an artist, if the work isn’t seen, it can’t communicate because there wouldn’t be an audience, nor would I know how a spectator responds to it. 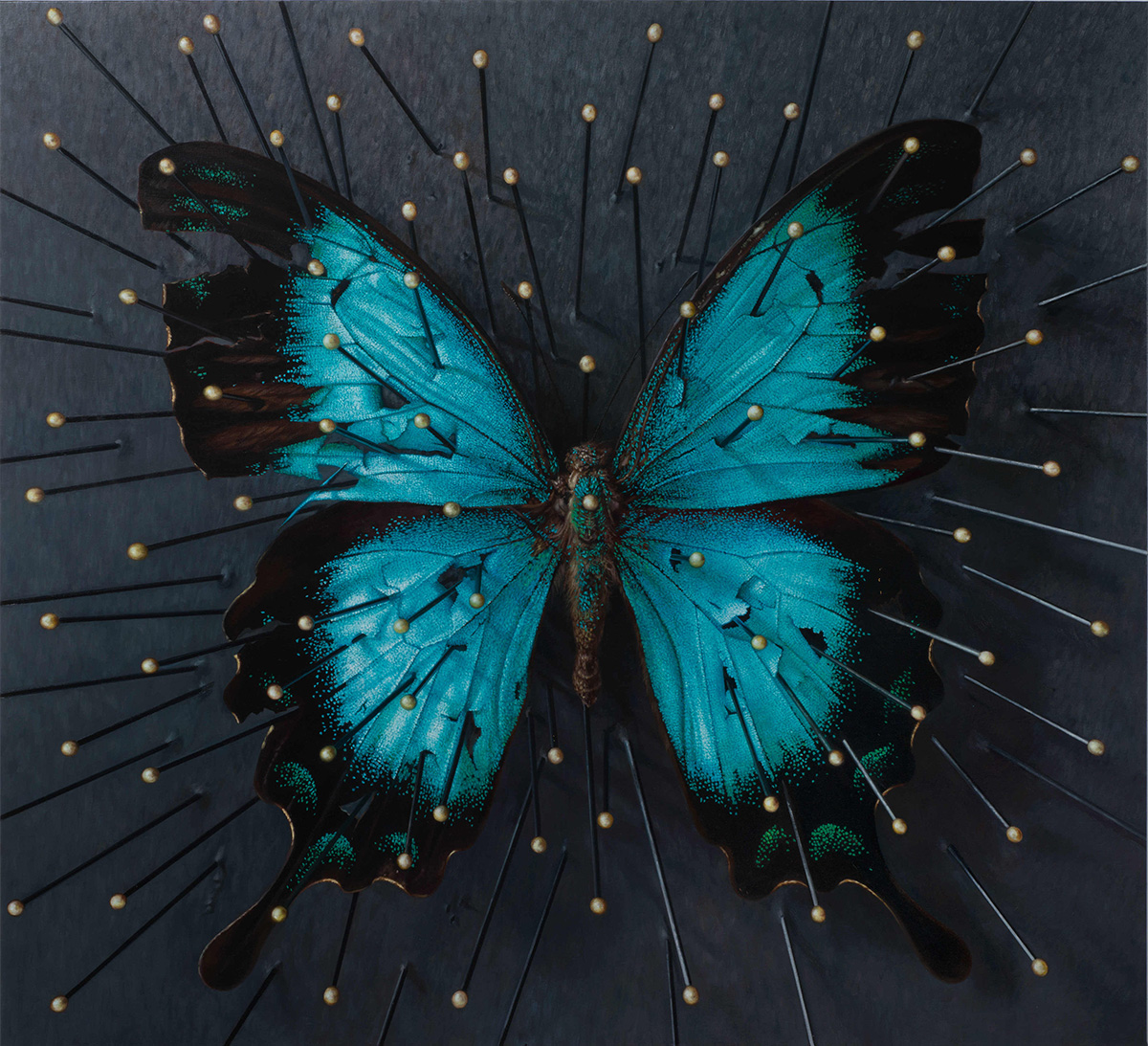 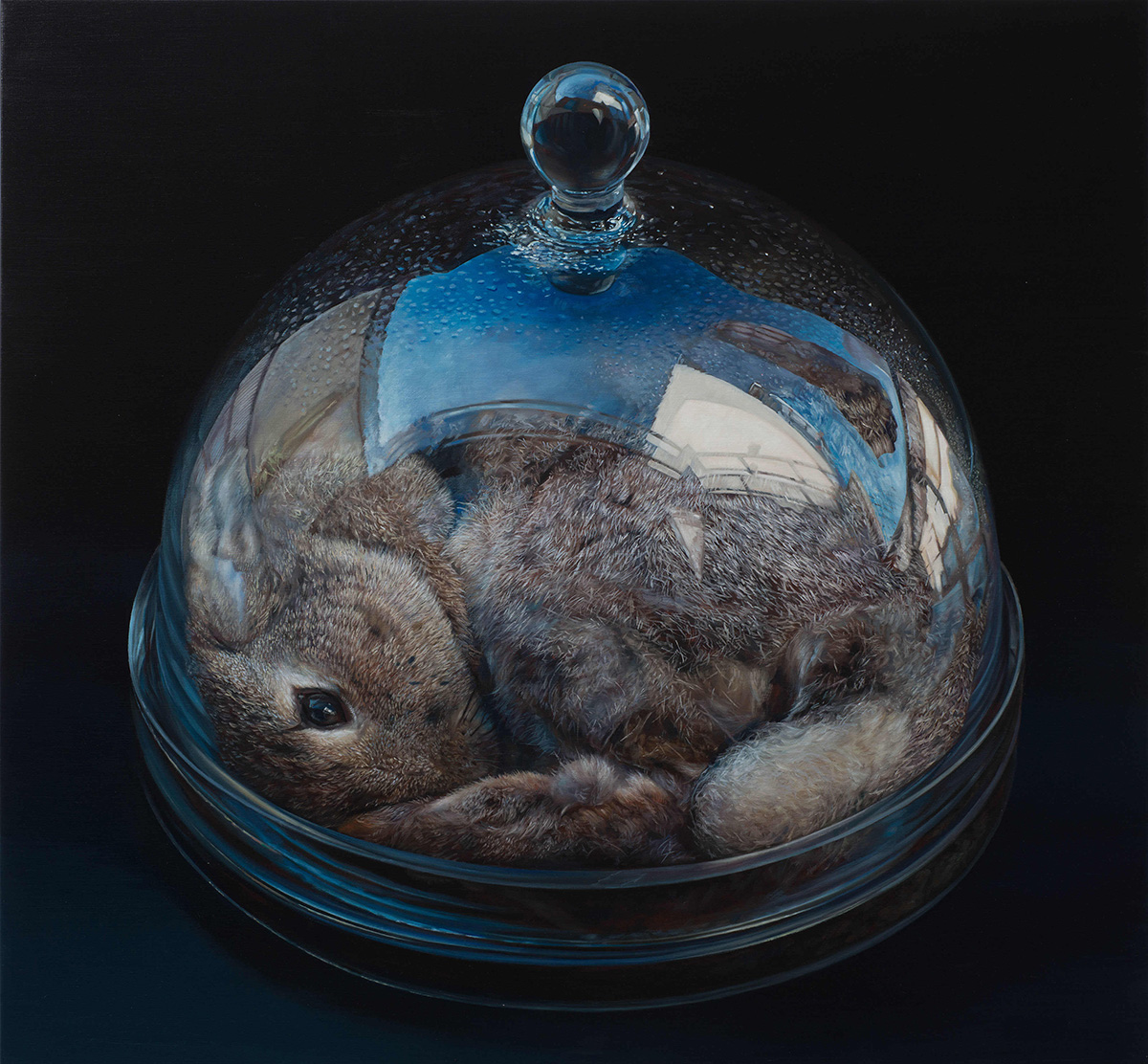 Is there anywhere we can see more of your work, digitally and in the flesh? What projects are you working on at the moment?

I’m very happy to be a part of the Nature Morte show at Guildhall Art Gallery for the moment, it’s a fantastic show. Further I am working on a new museum show that will be opening in September 2018 at Kasteel van Gaasbeek (Gaasbeek Castle) near Brussels in Belgium. For this occasion, we will also publish a book on my work. Digital information can always be found on my website www.cindywright.org.

Nature Morte is the Guildhall’s largest exhibition to date. It features work by major international contemporary artists including Michael Craig-Martin and Gabriel Orozco, as well as art from London-based artists and the City’s own historic collection dating back to the 15th century.

The exhibition has been brought together by MOCA, London, in partnership with Guildhall Art Gallery.