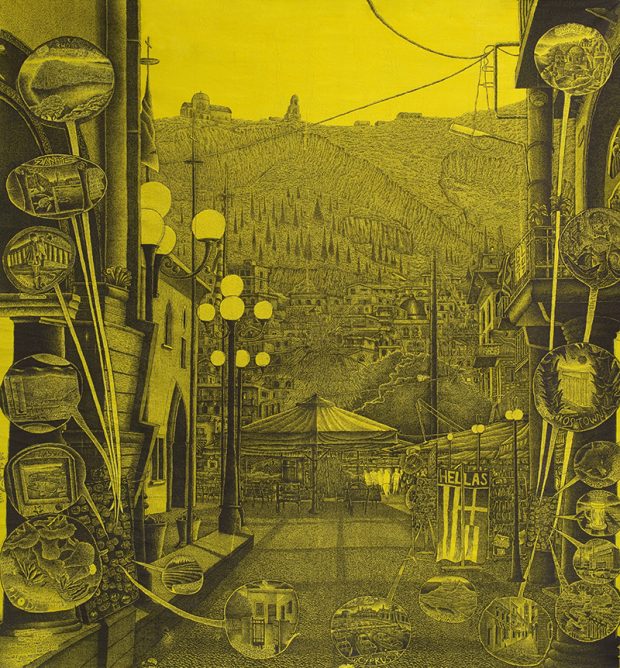 The annual Jerwood Drawing Prize has established a reputation for its commitment to championing excellence, and for promoting and celebrating the breadth of contemporary drawing practice within the UK. On 12th September 2017 the prestigious First Prize of £8,000 was awarded to Gary Lawrence for his monumental drawing Yellow Kalymnos and Fridge Magnets. 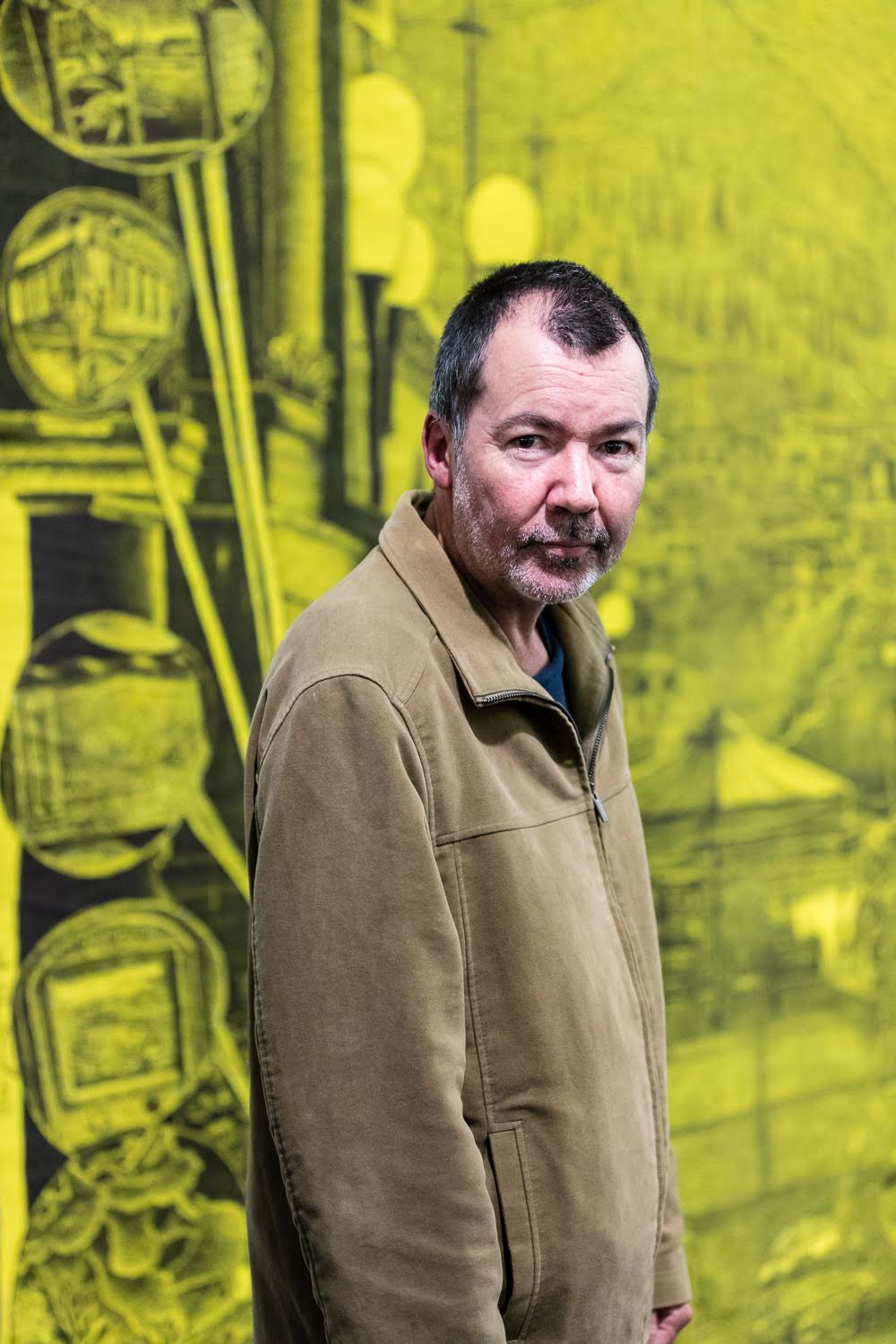 The largest and longest-running annual open exhibition for drawing in the UK, the Jerwood Drawing Prize is presented in collaboration with Bath Spa University. The first prize and other prizewinners were chosen from the 69 works by 65 artists which have been selected for the 2017 exhibition by Dr David Dibosa, writer, researcher and Reader in Museology at the University of the Arts London, Helen Legg, Director of Spike Island and Michael Simpson, artist. 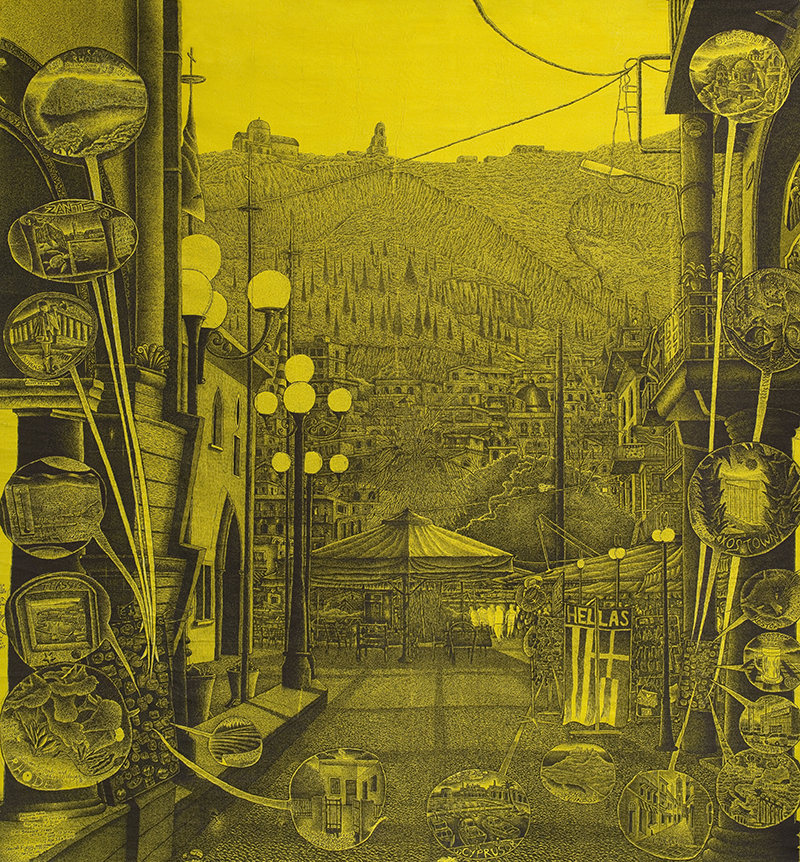 This is first time an artist has won the Jerwood Drawing Prize twice in the history of the award. Gary Lawrence’s intricate depiction of Greek Island Kalymnos, which has been produced in felt pen and poster paint, is a celebration of draughtsmanship and observational skill. The complex composition provides a snapshot of popular tourist spot Kalymnos Square, honing in on the myriad of magnets for sale at the side of the road, each accompanied by an ironic comment from the artist – ‘Athens – never been here’, ‘Cyprus ‘08 ok-ish’, ‘Zante Town – Euro Spar’. Taking almost a year to complete, the drawing is a labyrinth of personal narratives, executed with technical precision using readily available craft materials. Gary Lawrence also won in 2011 with his drawing Homage to Anonymous

Professor Anita Taylor, founding Director of the Jerwood Drawing Prize recalled the moment the drawing was unfurled for the selection panel to view: “it was immediately striking, with its intense colour and construction – it was compelling.” Artist and selector Michael Simpson said Gary Lawrence’s drawing was “a brilliant evocation of a time capsule; of time squashed in on itself as a topographical romance in retrospect.” Dr David Dibosa, also on the 2017 panel, felt the piece “radiated power”. 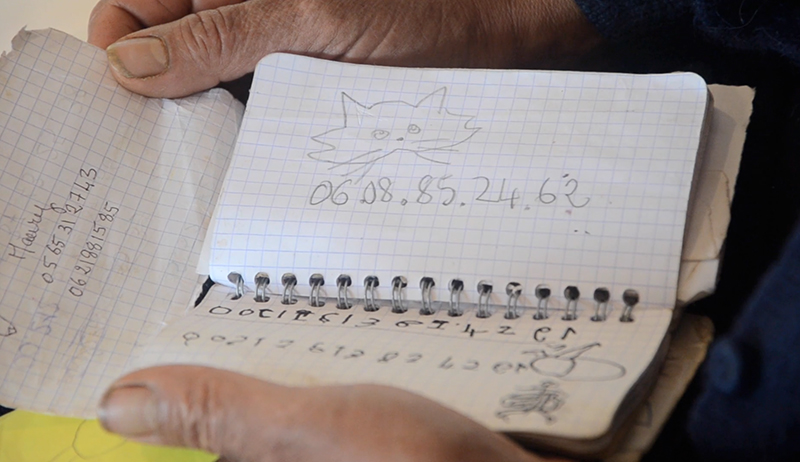 Ana Mendes is the recipient of the £5,000 second prize for her video work On Drawing – an emotive interview with Mina Pegourie, a housemaid the artist met during a residency in France. Moroccan born Pegourie discusses how she’s used drawing to navigate her way through life, given that she cannot read or write. She says “when someone gives me their phone number, I draw something to remind me.” The film encourages viewers to consider the relationship between thinking and drawing and the utilisation of drawing as a tool for everyday life.

The two Student Awards, each worth £2,000, were awarded to Jade Montserrat, for documentary photograph No Clothes Needed, and Dejan Mrdja, for his dynamic video work Chasing Synchrony 2.0. 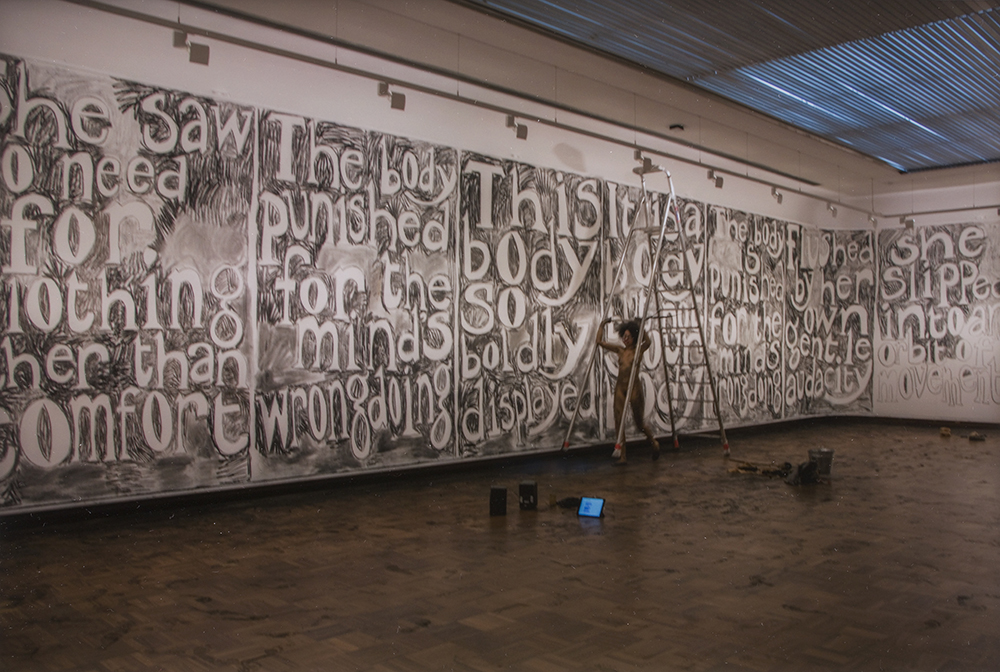 Jade Montserrat’s practice lies in the intersection between art and activism, manifested through performance, film, installation, sculpture, print and text. The artist interrogates these mediums with the aim of exposing gaps in our visual and linguistic habits. Her prizewinning piece speaks of entanglement and commodity fetishism; a polemic engaged in combat between histories of colonialism and today’s realities. 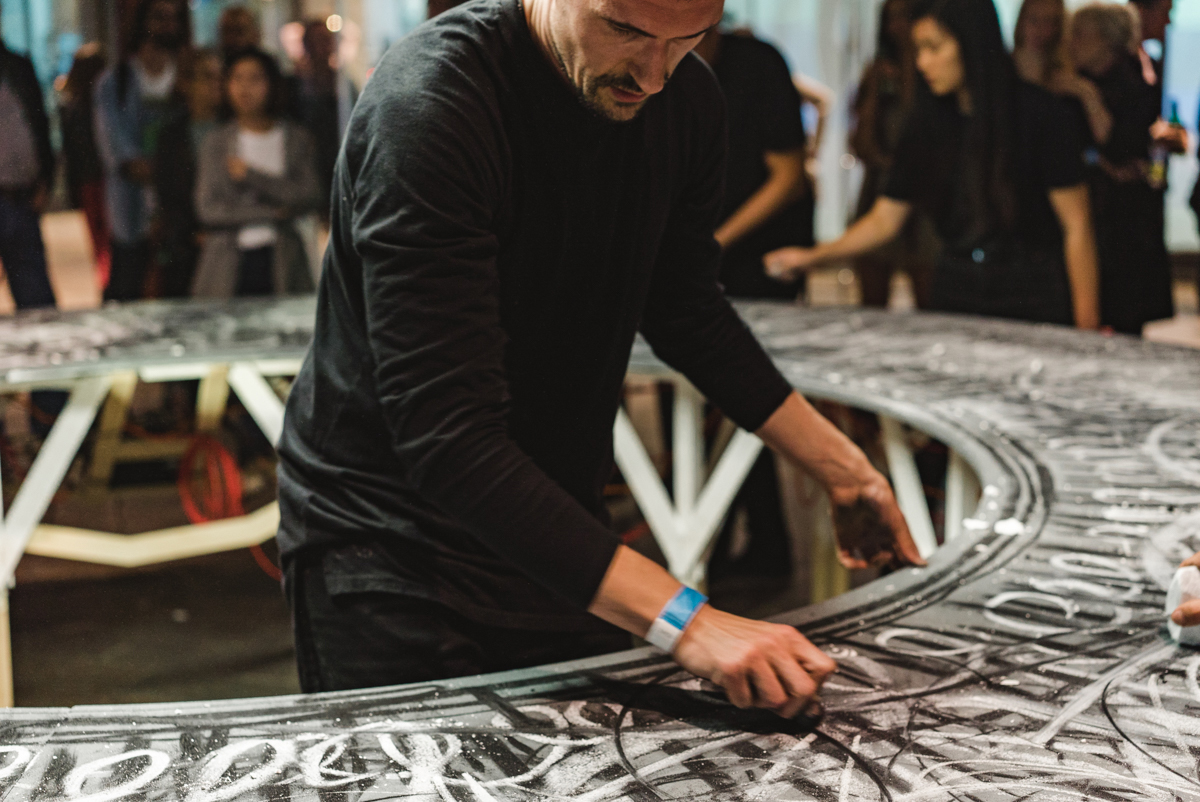 In Dejan Mrdja’s Chasing Synchrony 2.0, the artist creates a link between drawing, installation and performance. Rather than focusing on an end product or outcome, Mrdja celebrates the process of drawing – it becomes a shared activity, uniting both performers and viewers through an immersive experience. 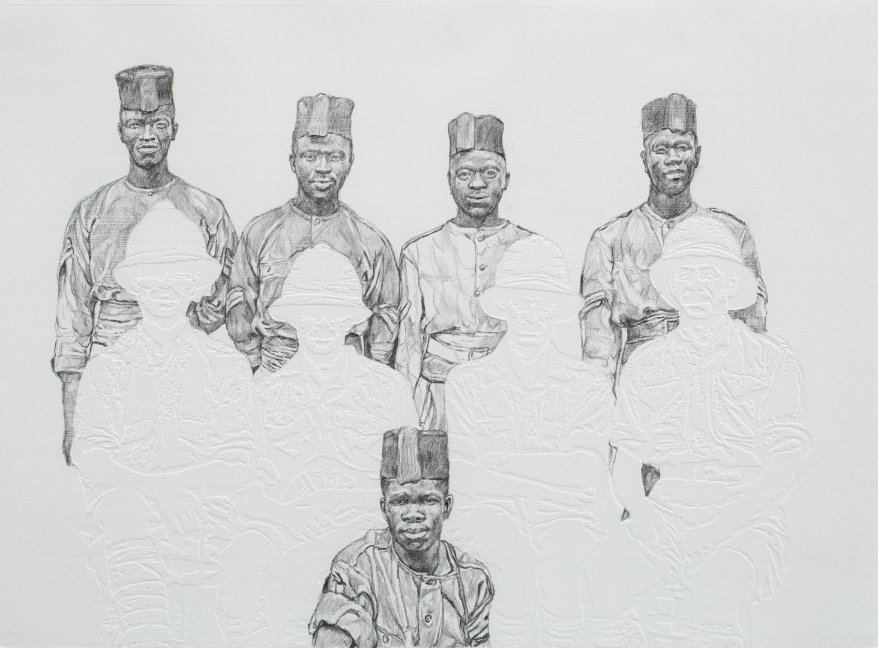 Barbara Walker is the recipient of the newly-introduced Evelyn Williams Drawing Award, worth £10,000. Barbara Walker’s figurative drawings explore race identity, belonging, class and power. The new award, which is worth £10,000, will support the artist to realise a body of new drawings, culminating in a solo exhibition at Jerwood Gallery, Hastings in 2018. Eligible artists selected for the 2017 exhibition were invited to apply for the Award. The final selection was made by Elizabeth Gilmore, Director, Jerwood Gallery, Hastings; Anita Taylor, founding Director, Jerwood Drawing Prize, and Nicholas Usherwood, Art Critic and Curator and trustee of the Evelyn Williams Trust.

The Jerwood Drawing Prize is the largest and longest running annual open exhibition for drawing in the UK. Supported by Jerwood Charitable Foundation through its programme of awards, exhibitions and events, Jerwood Visual Arts, Jerwood Drawing Prize is a unique initiative led by founding Director, Professor Anita Taylor (Executive Dean of Bath School of Art & Design at Bath Spa University). The Prize is committed to championing excellence, and to promoting and celebrating the breadth of contemporary drawing practice, this year including hand drawn, digital and three-dimensional works. In offering emerging, mid-career and established artists a national platform to exhibit their work, the exhibition has established a reputation for developing new insights into the role and value of drawing in creative practice today.

Dr David Dibosa trained as a curator after receiving his first degree from Girton College, University of Cambridge. He was awarded his PhD in Art History from Goldsmiths College, University of London. During the 1990s, he curated public art projects. He is currently Course Leader for MA Curating and Collections at Chelsea College of Arts. He is also a Researcher in University of the Arts London’s Research Centre for Transnational Art, Identity and Nation (TrAIN).

Helen Legg was previously Curator at Ikon Gallery, Birmingham, where she worked for 5 years on exhibitions and offsite projects as well as the development of Ikon Eastside, a second gallery based in a former factory building in Digbeth. In 2010, she was appointed Director of Spike Island, an international centre for the development of contemporary art and design, based in Bristol. She sat on the selection panel for the Paul Hamlyn Artist’s Awards in 2013 and latterly for the Turner Prize and the CAS Annual Award in 2014. She is Chair of Visual Arts South West and an advisor for the Bristol Cultural Development Partnership.

Michael Simpson studied at Bournemouth College of Art (1958-60) and Royal College of Art, London (1960-63). He now lives and works in Wiltshire, UK, making large scale paintings in ongoing series that repeat and rework a number of key elements. Rooted in a fascination with fifteenth century Venetian and early Flemish painting, and inflected by the formal restraint and reduced palette of Minimalism, Simpson has developed a distinctive, darkly comedic artistic vocabulary with which to create works that move beyond their subject matter to question the nature of painting itself. His forthcoming solo exhibition will open at Blain Southern, Berlin in September 2017.

Julie was the editor of the Jackson's Art Blog for 10 years and now writes for the blog part time. With an encyclopaedic knowledge of art materials (majoring in oils and acrylics), she loves researching and writing pieces for the blog as she learns something new each time. Julie is also a professional artist who studied on the Turps Studio Painting Programme and Camberwell College of Art.