Even visiting the main part of Frieze can be quite overwhelming with many of the 159 galleries curating spaces that show several artist works. This year there were several dedicated to the work of one artist functioning as exhibitions in themselves. To sum up the highlights or general trends seems almost impossible due to the range of work and the different ways it was presented. A few of the more installation-style gallery spaces stood out, along with a trend, as it was last year, towards paintings and works that incorporate reflective surfaces – perhaps a conceit to the continued relationship of instagrammable art and the public relation to it through social media.

Another distinct element, as always with Frieze, were works that push boundaries – with the shows pushing works that don’t fit the traditional art market canon prefacing traditionally craft materials, such as textiles, and a reasonable amount of work by women and historically marginalised groups. 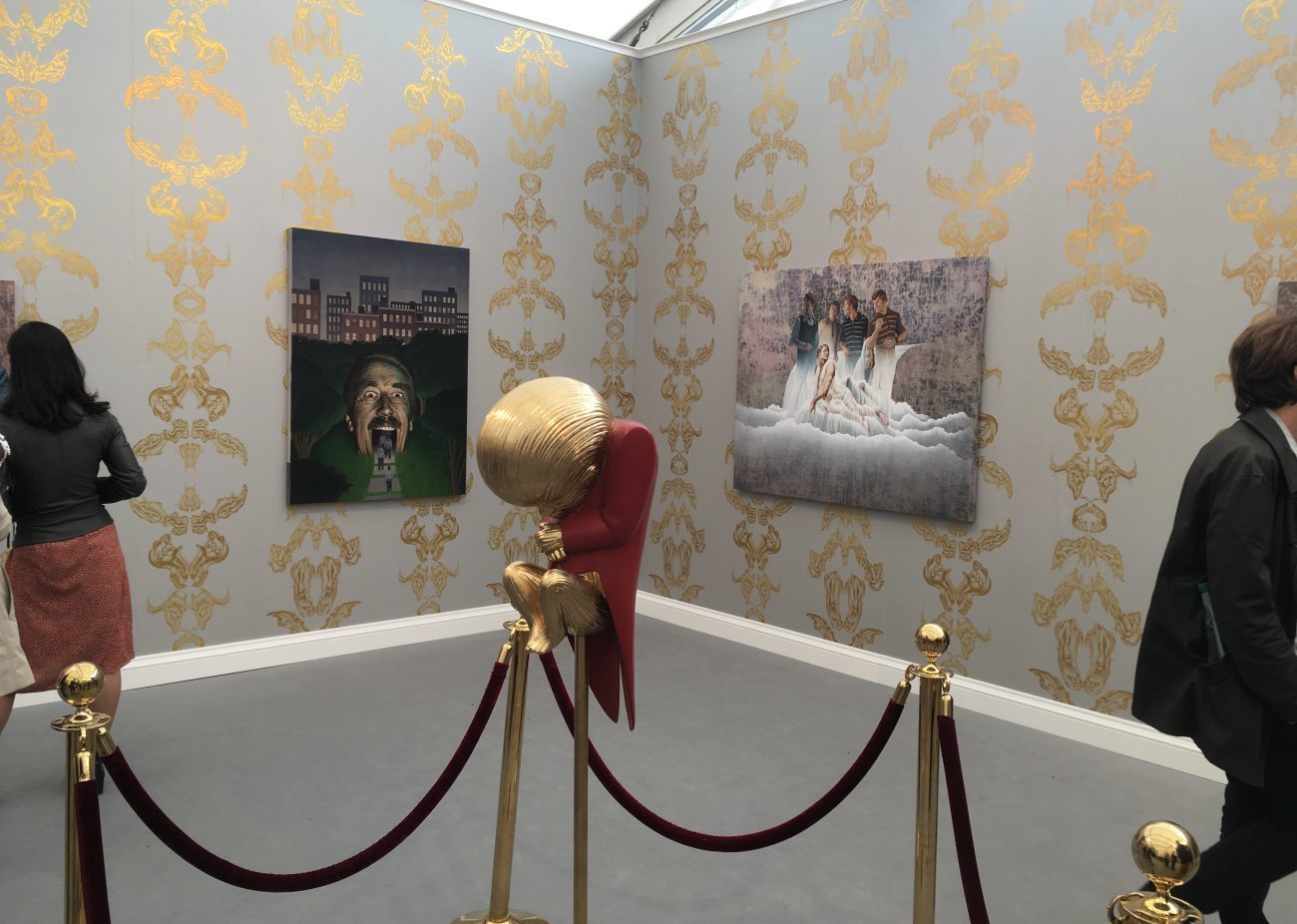 The Simon Lee Gallery chose to exhibit works only by Jim Shaw allowing him with his gilded wall paper based on Mar-a-Lago wallpaper using Trump’s distorted face forming the head of a cow, to create a parlour room reflecting on modern grotesquery, consumerism and political factions. As a whole piece it had distinct impact and while covering significant, disturbing issues it tended a little towards shock factor and a flippant humour – both a delight and in itself slightly unsettling. 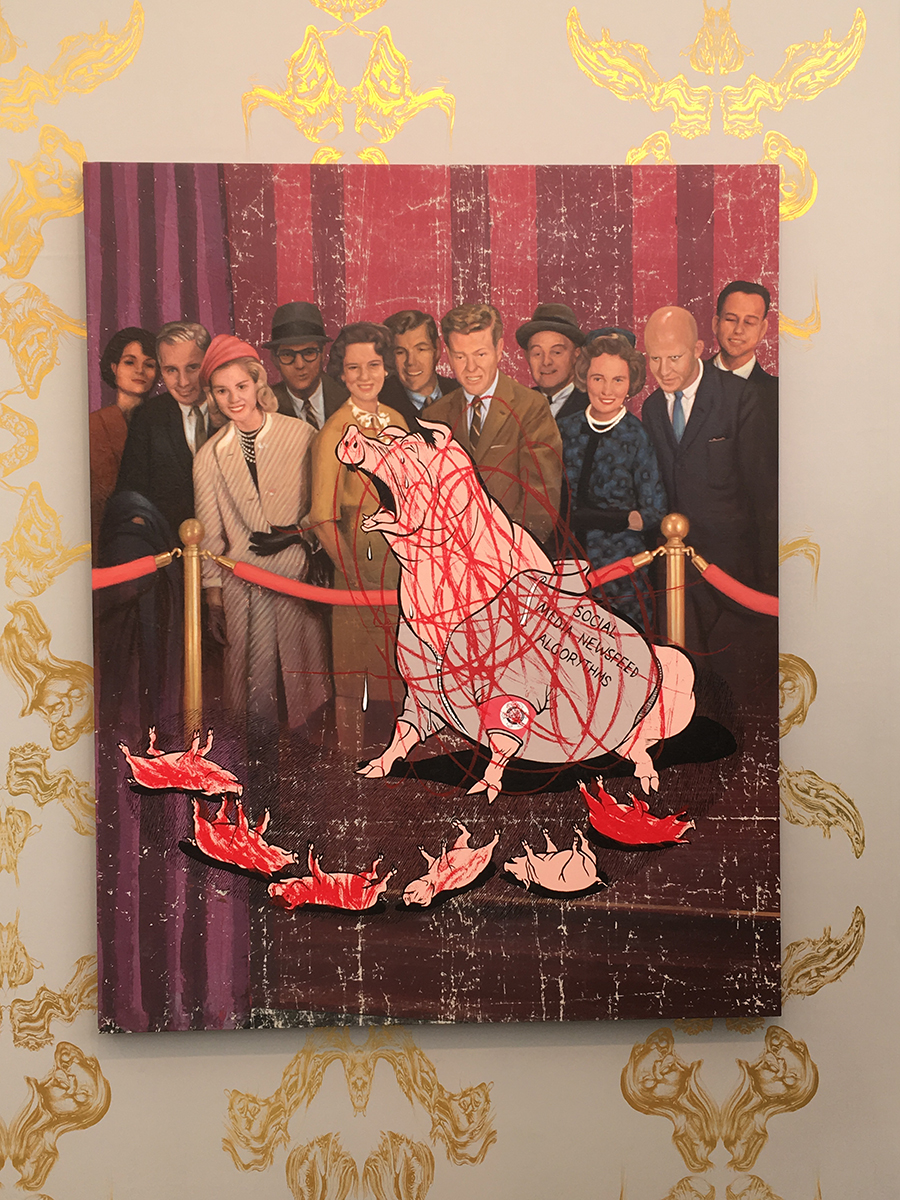 Hannah Levy’s work at Frieze exhibited by mothers’ tankstation received a lot of attention last year and her collection of pieces shown in 2018 Frieze are certainly as attention grabbing if not in a slightly subtler way. The combination of the texture of the pearls, embedded in silicone, mock mid-twentieth-century deckchairs, with the sound of gritty pings as pearls are dropped into a surface and a looping video of pearls extracted from the flesh of oysters has the sensory force that the is known for even in the busy location it was located in. 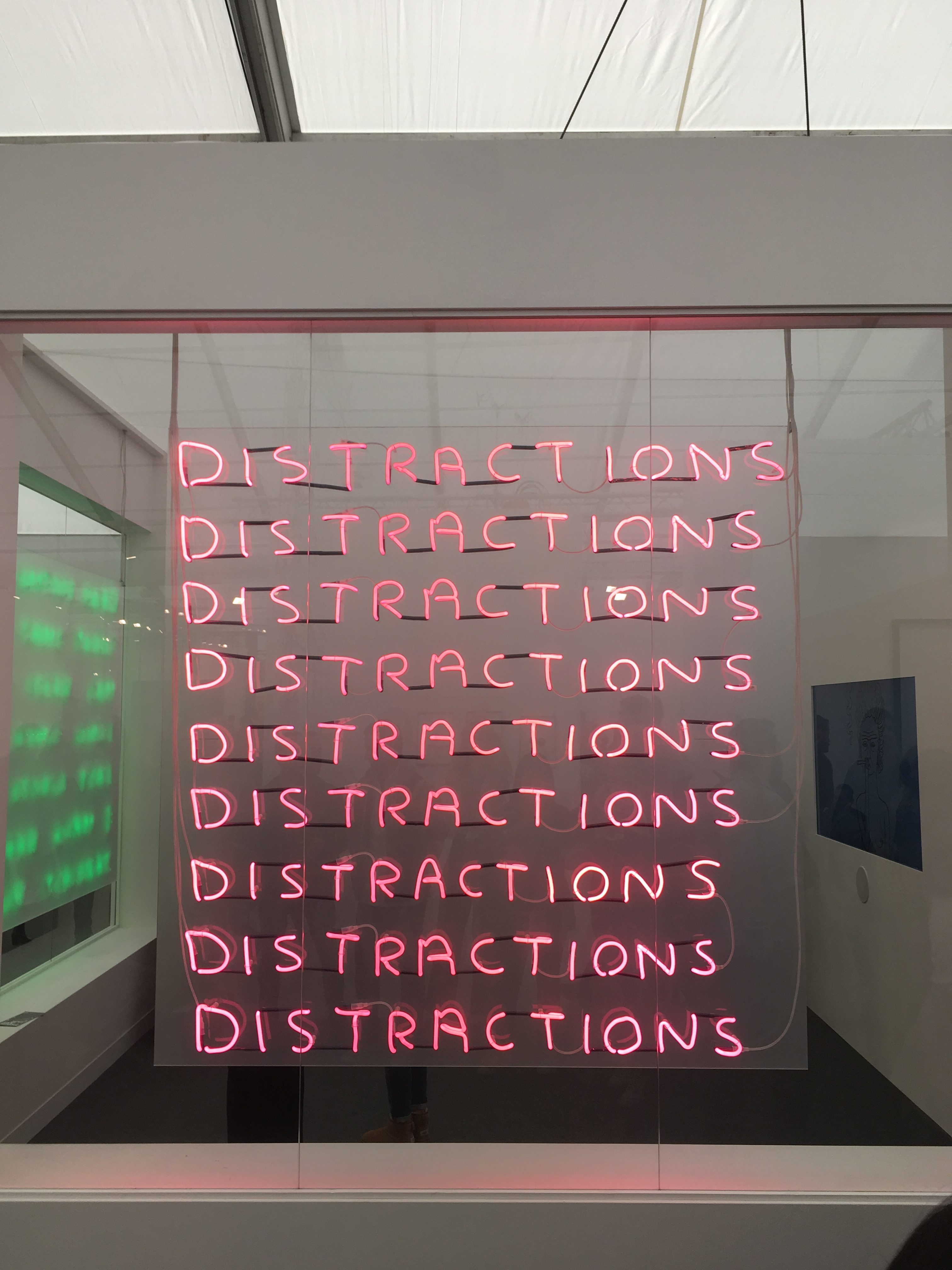 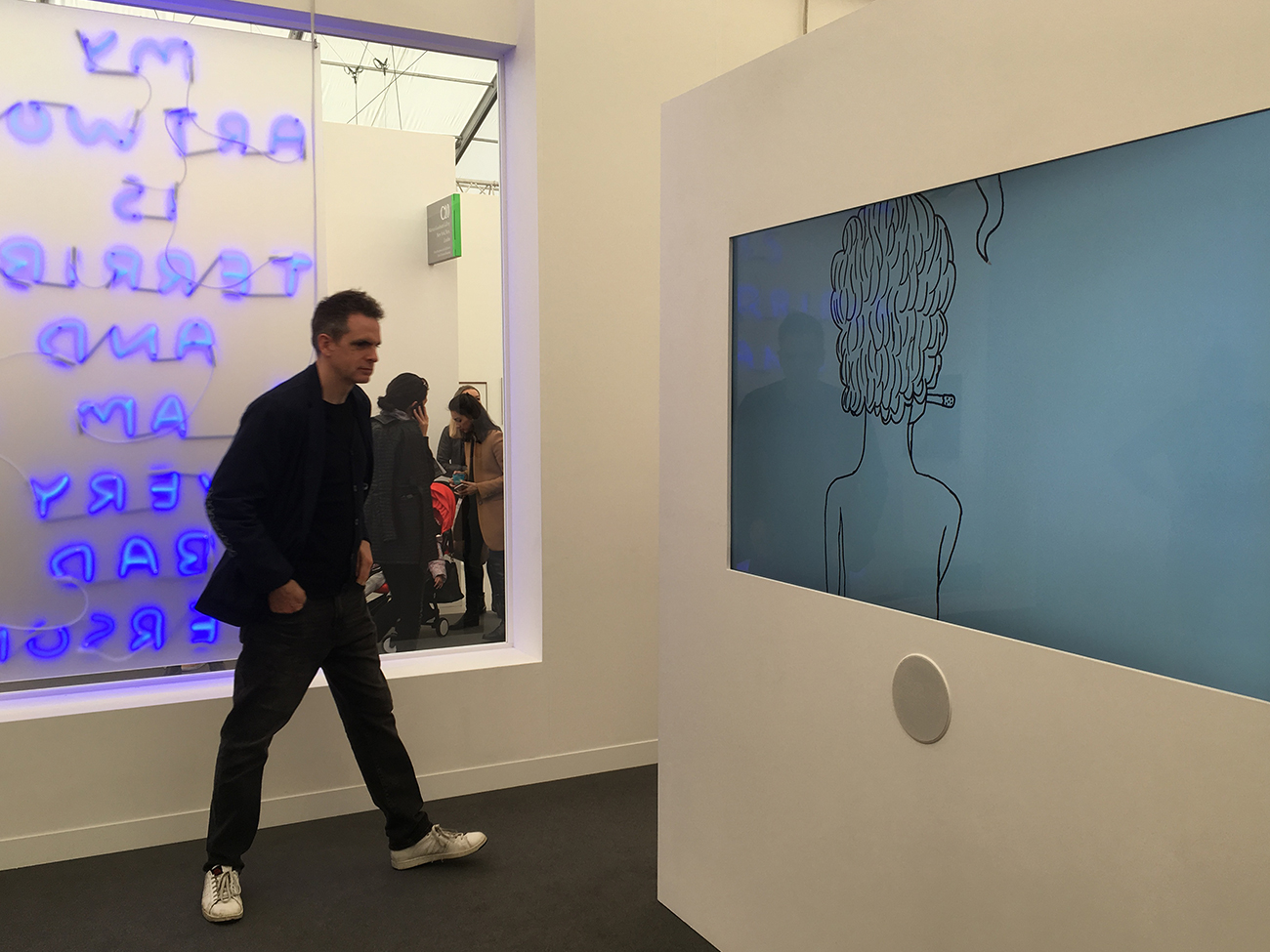 Shrigley’s solo stand with typical humour was created to mimic a shopfront whose “windows” were filled with eye-catching and infinitely instagrammable, glib signs. The 5 signs are deliberately opaque and meaningless, critiquing advertisements and possibly neon art. Once you entered the “shop” you were met with his piece ‘Endless Joint’, 2017 an animation that captures the cycle of smoking.

While that main space of the stall was teeming with people a sound installation contained within a small box room at the back corner of the stand, had 4 extractor fans high up on the walls while an endless loop of Shrigley’s voice imitation of industrial extractor fans plays. The white noise and almost quiet of the space, which was mostly empty, not only was a direct contact to the rest of his work but also to most of Frieze itself. It demonstrates Shrigley’s ability to reinstall the mundane as a point of interest and an important factor, the humble, and usually annoying, extractor fan gets placed as something to build a shrine around. 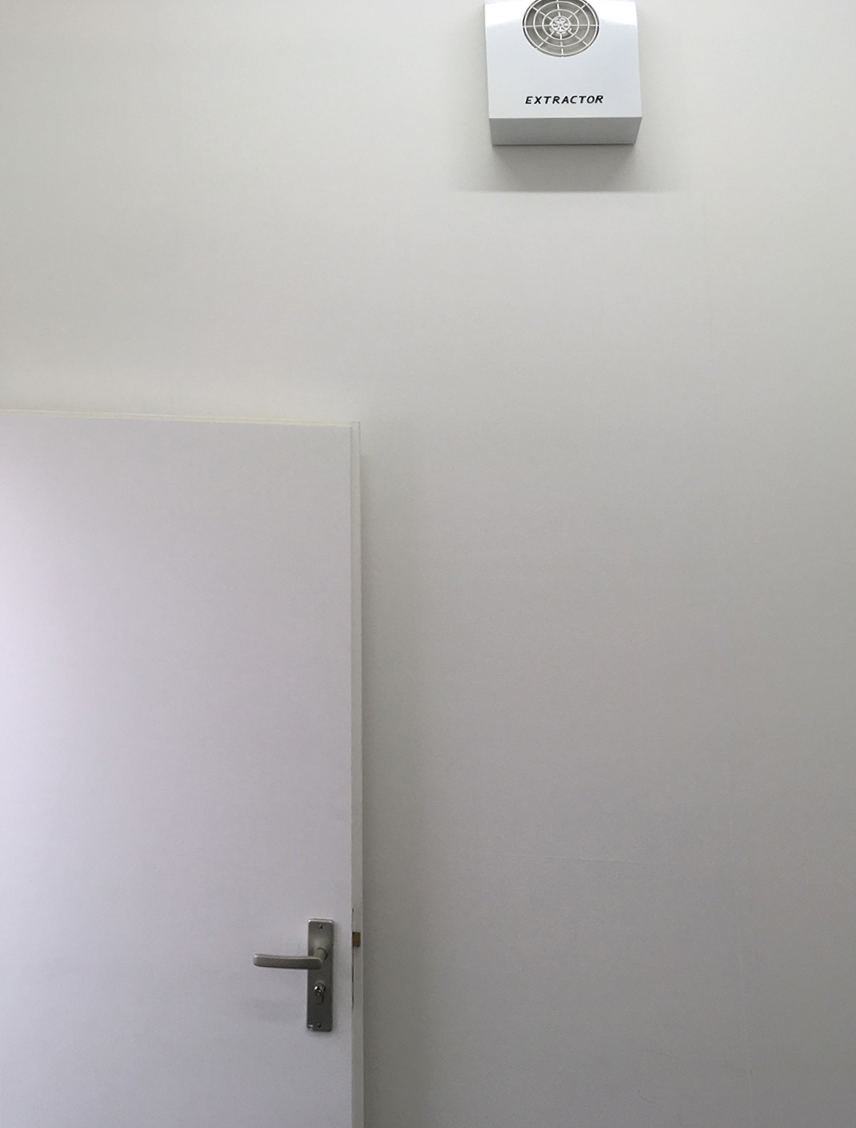 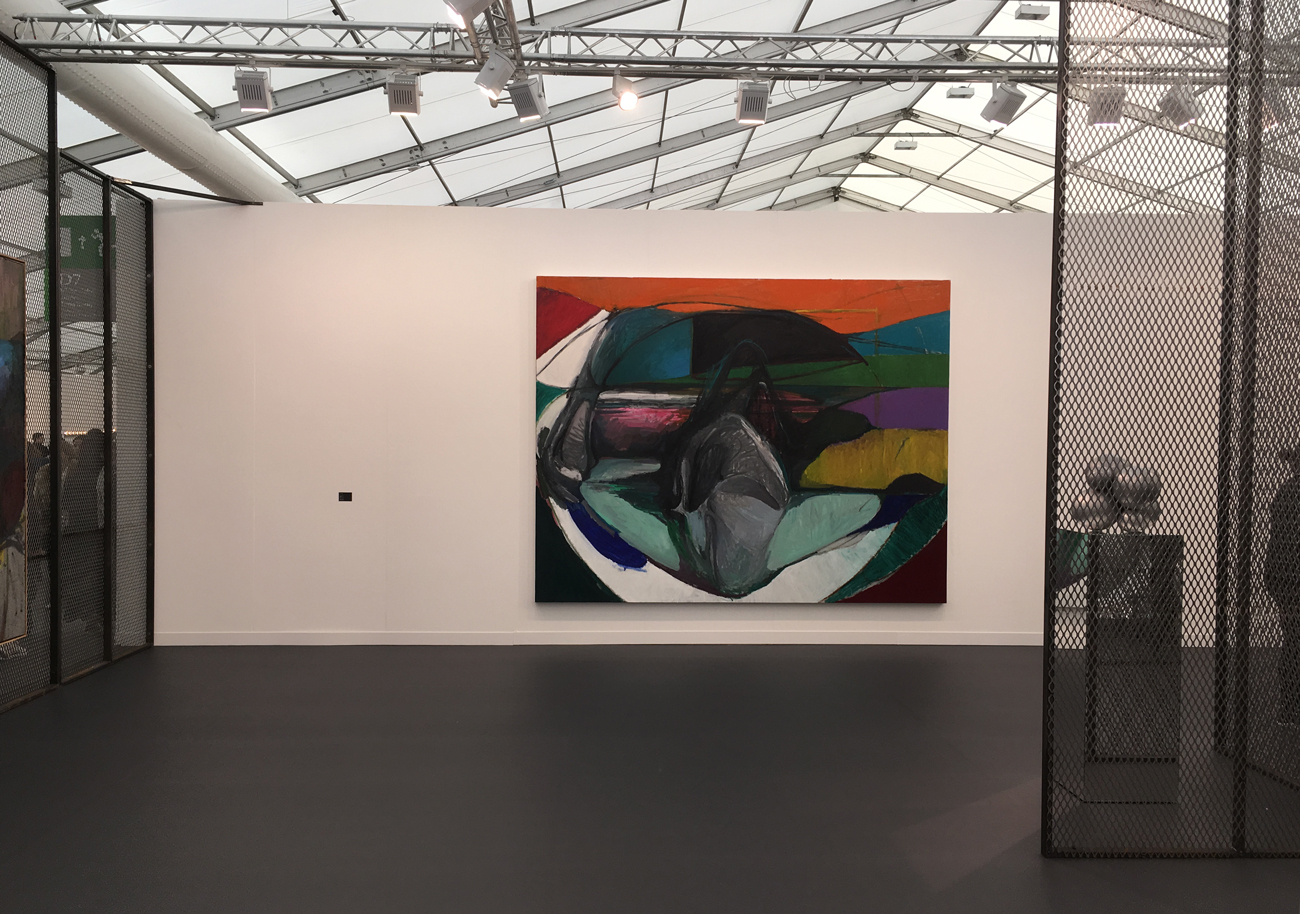 The White Cube’s presentation was a booth as installation designed by Liu Wei. The vivid and luscious ‘Outdoors’ paintings, a new style for Wei with their fluid, abstract landscapes, were well complemented by the metallic organic shaped sculptures, however the industrial mesh which was intended to allow works to be seen individually or in dialogue verged on making the section appear like a set design focused on warehouse chic rather than trusting in the work. 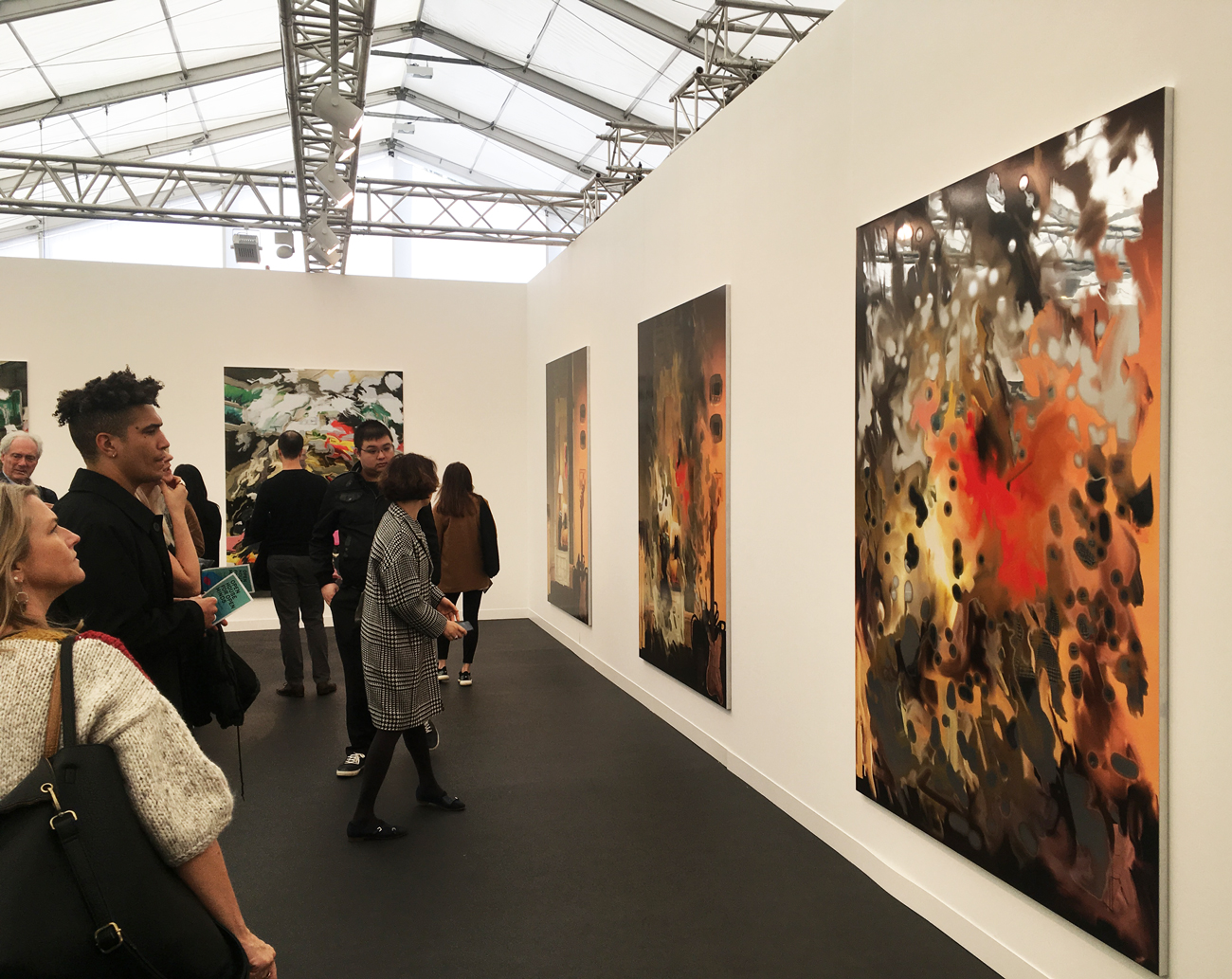 Dominating the main entrance to the fair was a stall featuring Urs Fisher. A series of 3 large, triptychs are shown in a u-shape. Each one features an iPad painting of the Swiss artist’s New York home. The triptychs start with an image which is erased over the course of the three images to expose more of the reflective mirrored surface. This along with his adjacent wax sculpture of Francesco Bonami on a fridge which is designed to be burnt like a candle, shows a preoccupation with transience and destruction. 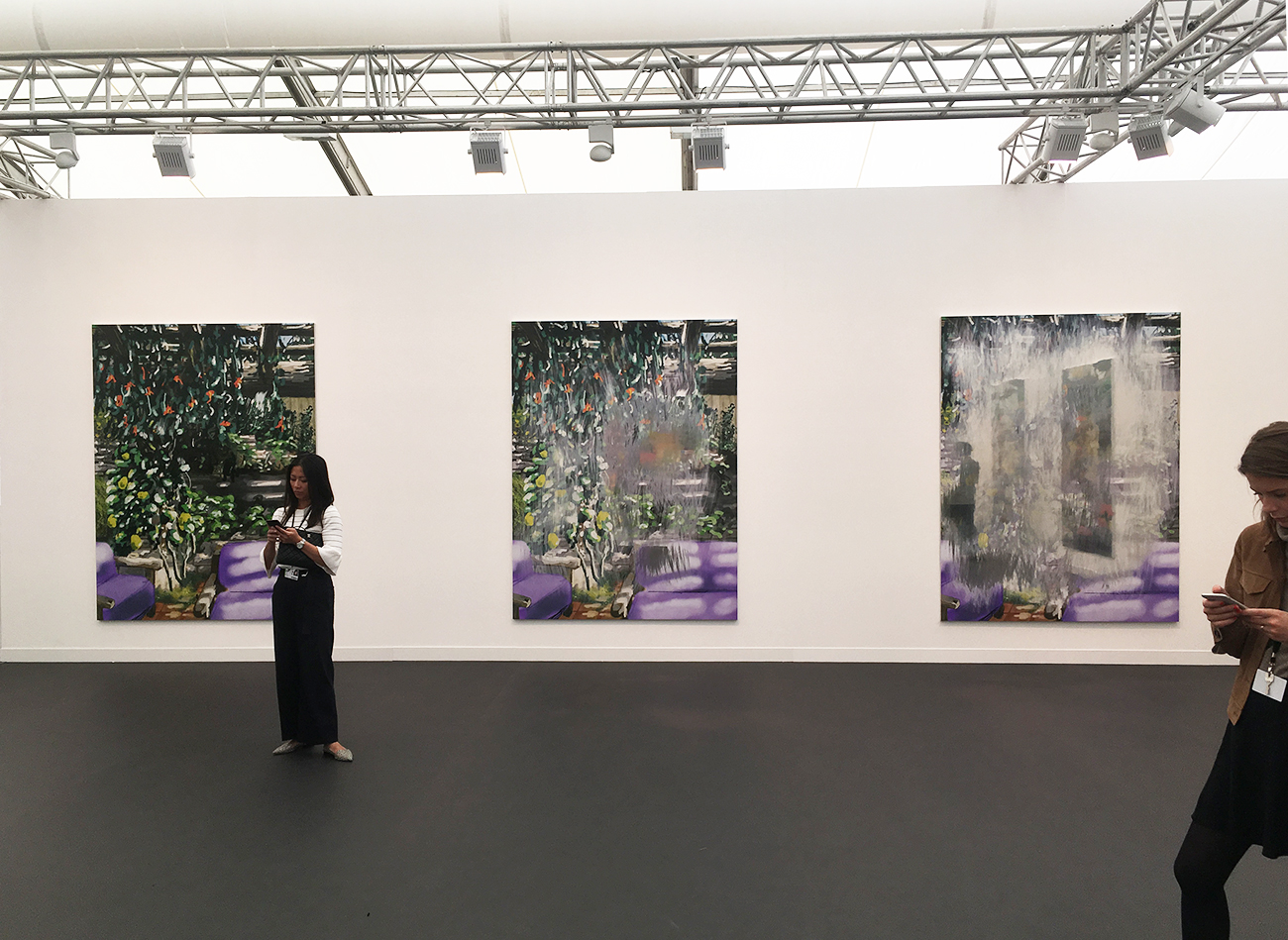 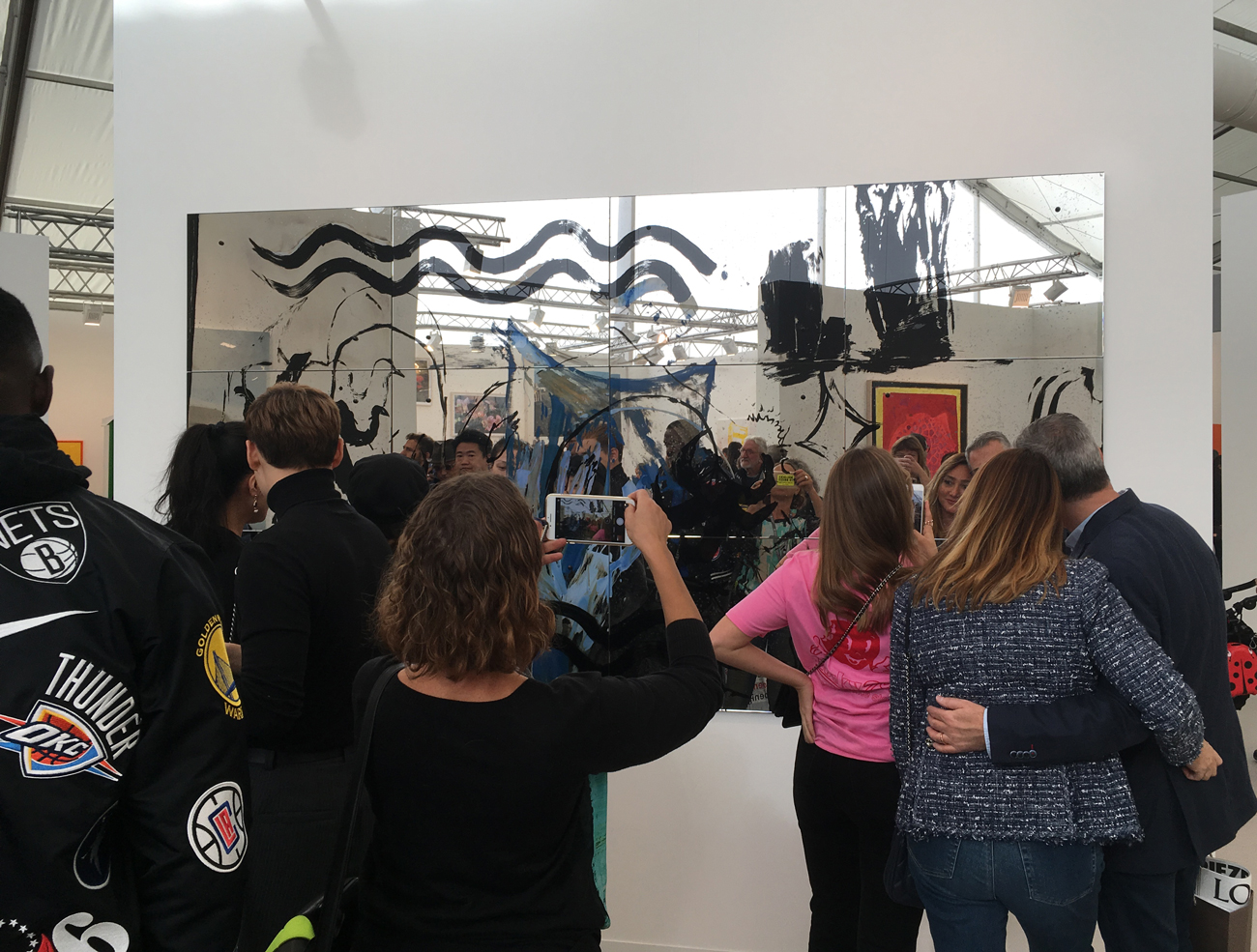 These are two examples of the multitude of mirrored works that were on show at this year’s Frieze highlighting the preoccupation where people want to capture not just having seen a work for their online presence but also want to include themselves in the photo of them viewing it. The reflectiveness of the works is also uniquely interesting in itself in how the viewers movements that are incorporated and exist within the piece itself for a brief moment, In Issac Julian’s pieces below the profile of a person walking was often mirrored by the movement of the public walking past. 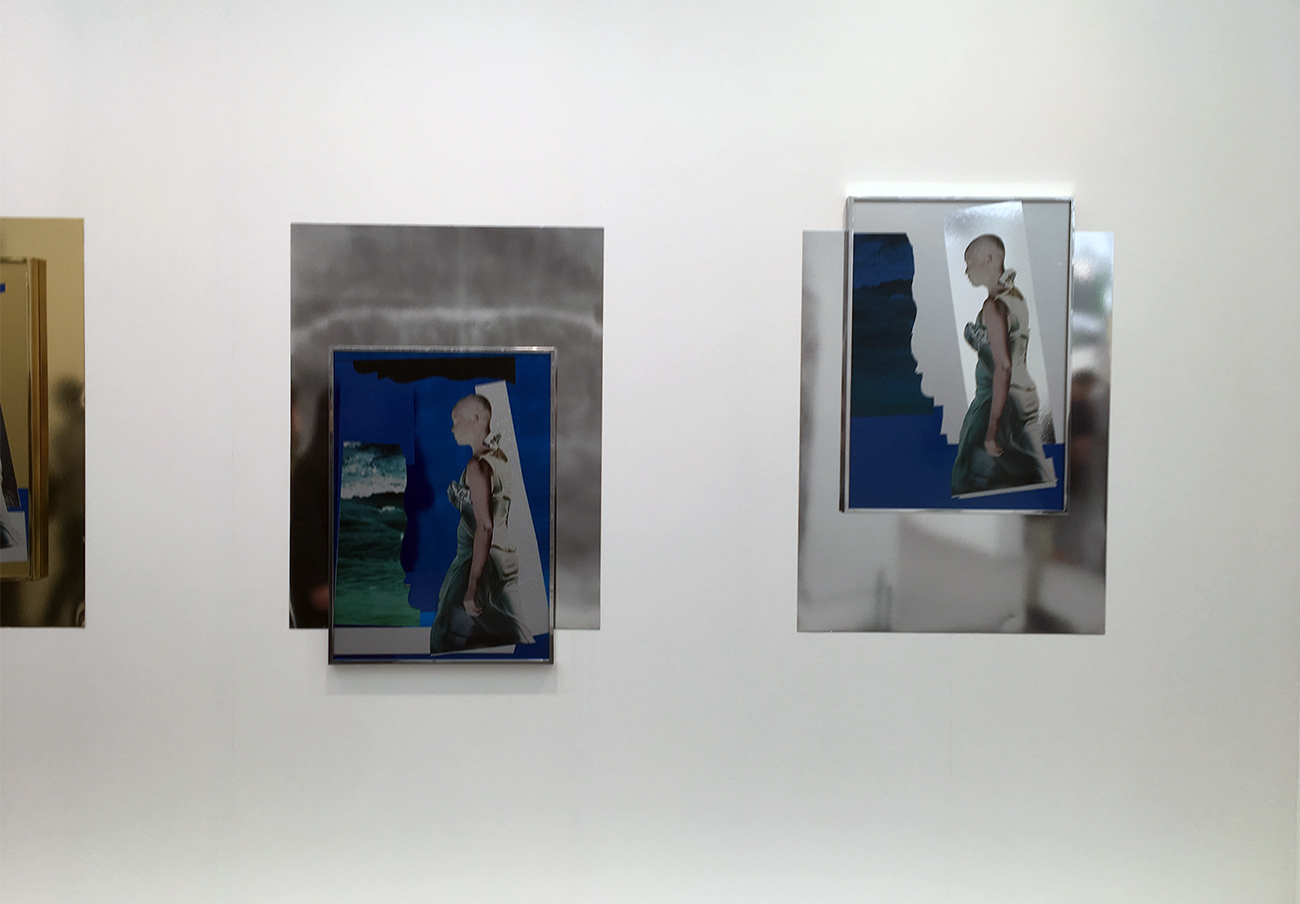 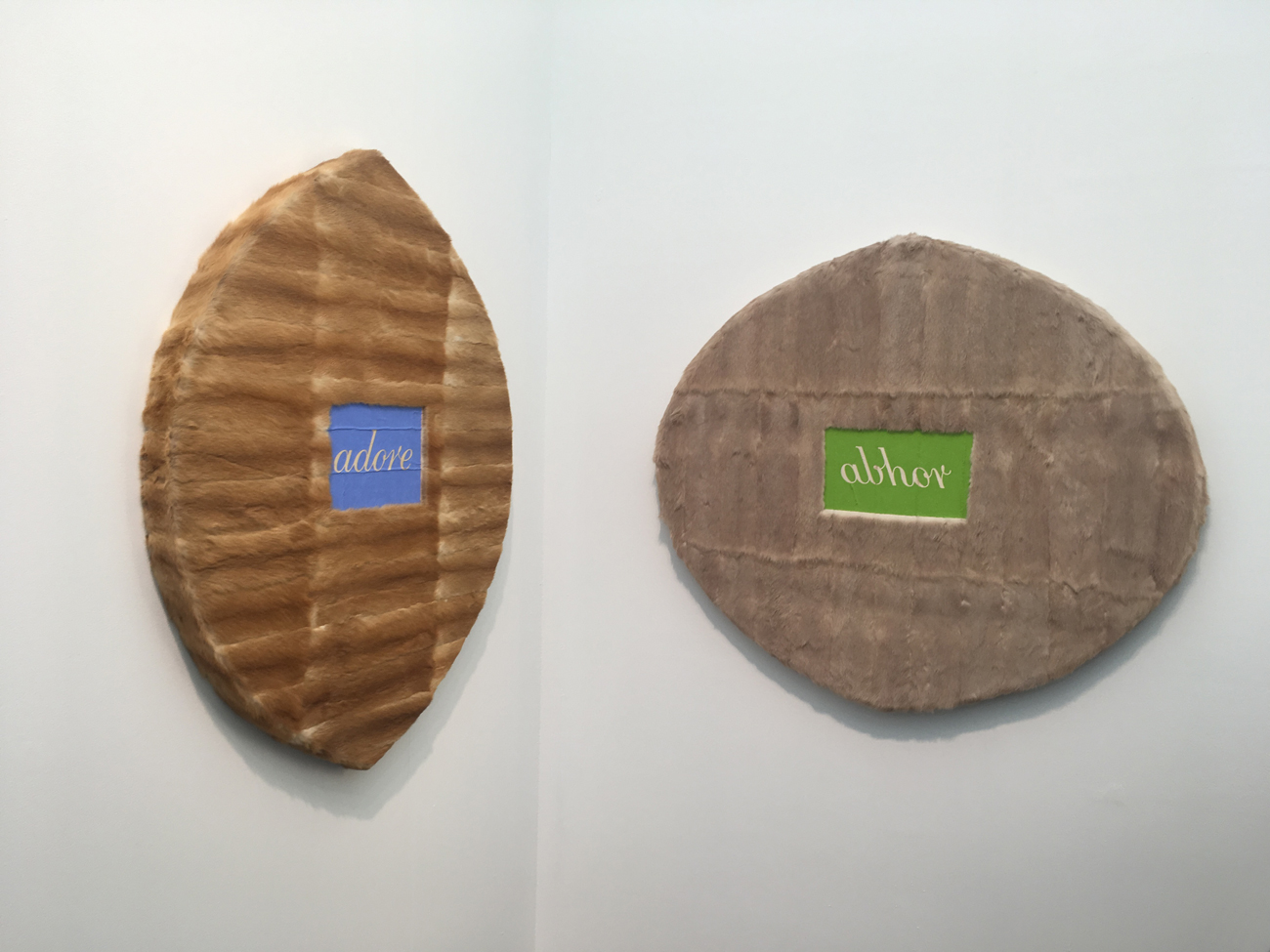 The thematic curated section “Social Work” really came into it’s own this year with the work of eight activist, feminist artists in eight separate monographic booths. Helen Chadwick’s work was as poignant as ever, interestingly the selection of Nancy Spero’s work included a small collaged piece titled Screw Corporate Art alongside other large collages and prints on a range of subjects. Faith Ringgold’s beautiful narrative paintings, or rather story quilts, are a delight for anyone interested in the history and subversive nature quilting and textile crafts as well as this traditions complex relation with fine art.

To see a full break down of the artist who took part in “Social Work” look at our preview blogpost here and to see further selected works from the section you can look at Julie’s post here. 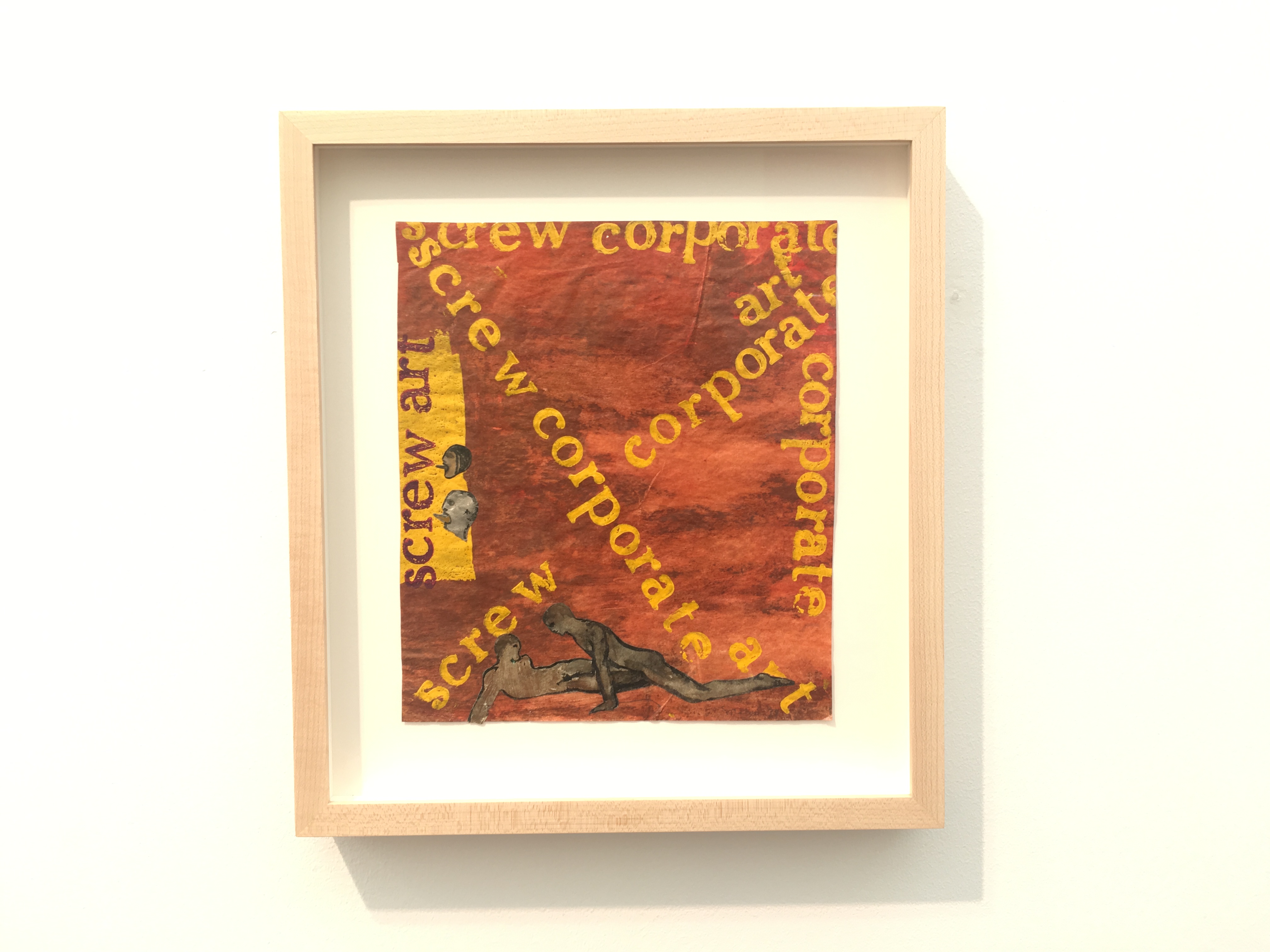 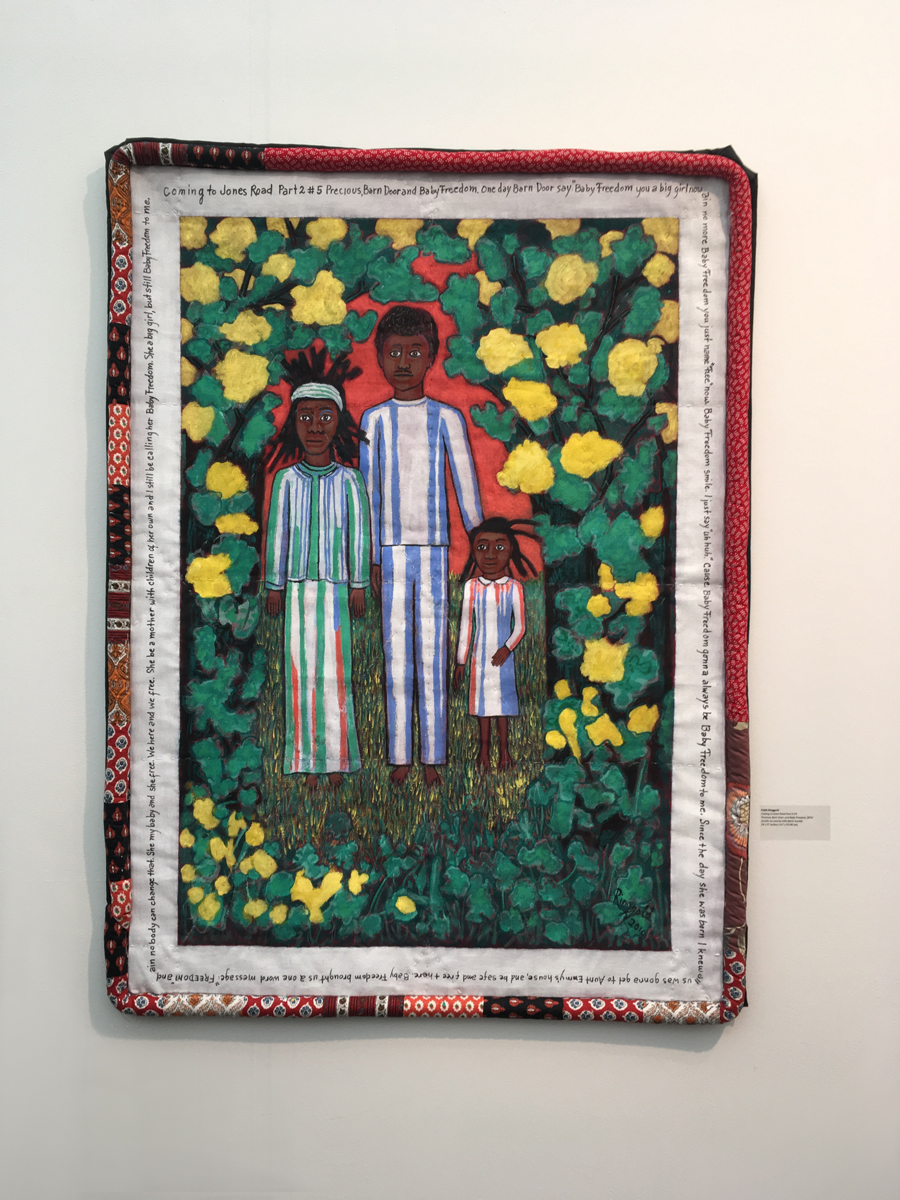 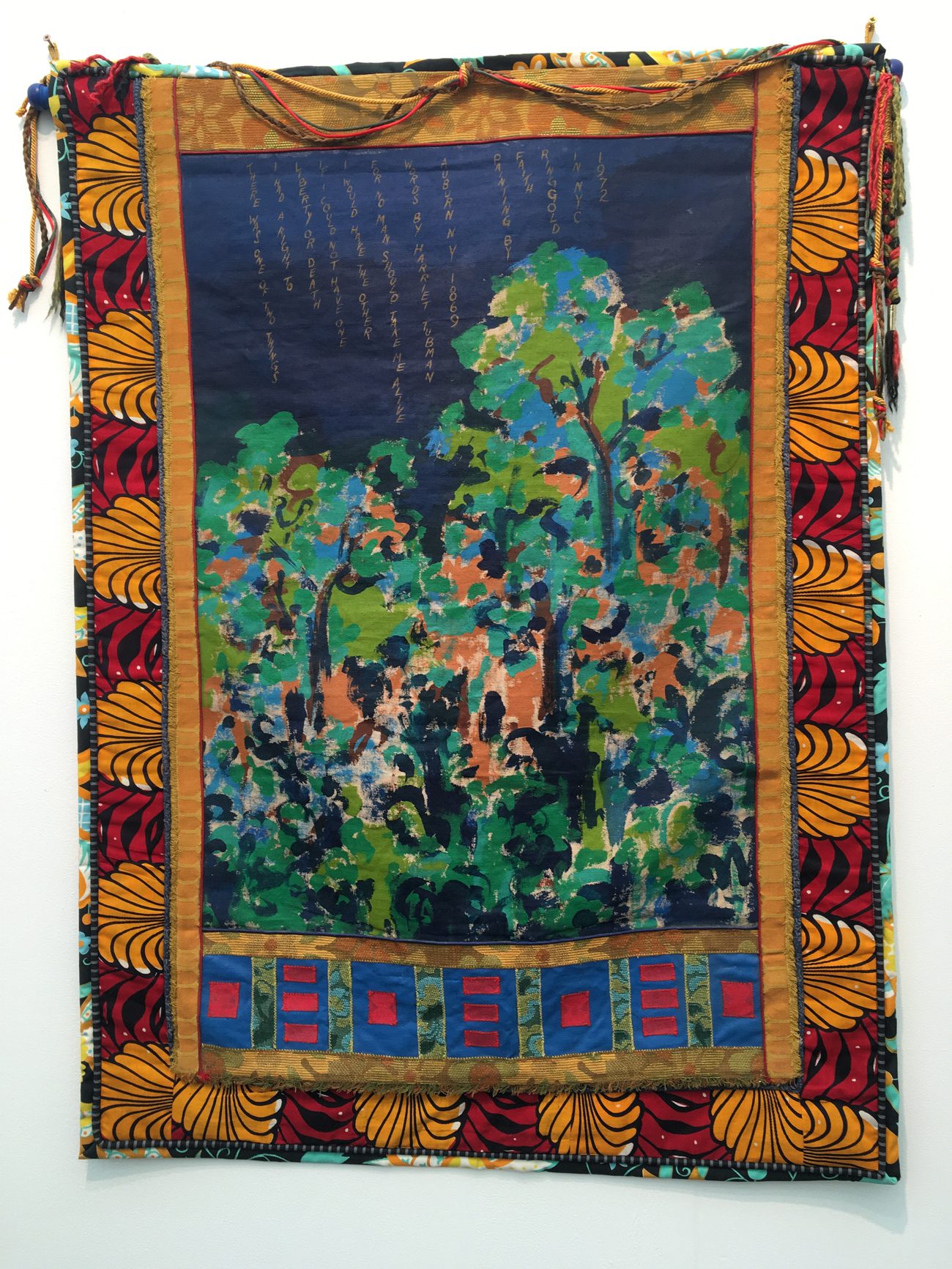 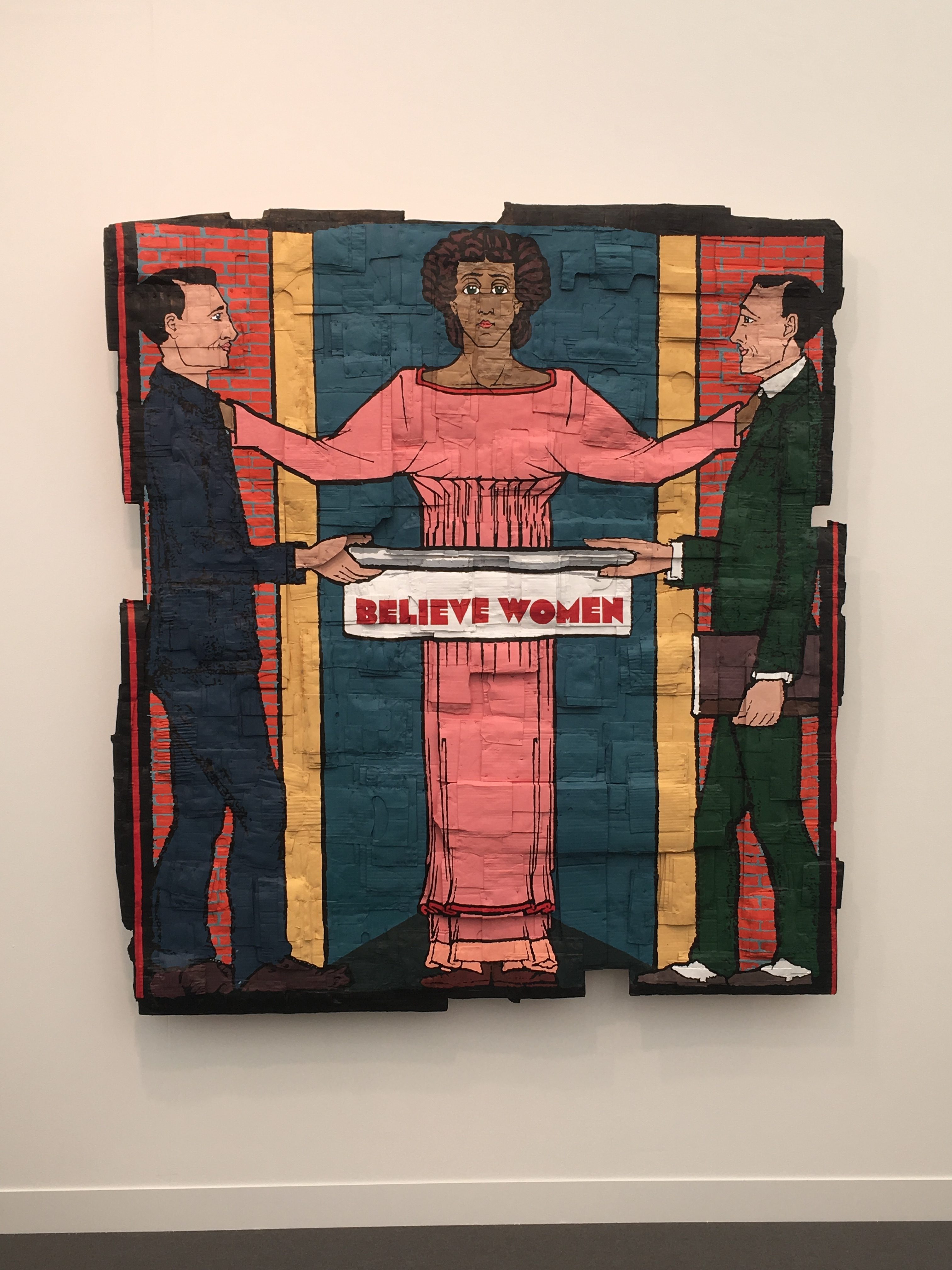 Lots of the works operate on political themes or emphasised current cultural anxieties. Andrea Bowers piece Believe Women was only recently finished and seems timely considering Christine Blasey Ford’s recent testimony at Kavanaugh’s hearing; Josh Kline’s Unemployed journalist reflects a throw away, exploitative, homogenous culture; Vlassis Caniaris’s Urinals of History seems scarily relevant made in 1980s it references that the Greek’s have tried to erase their history (pissing on it) and that this destroys tradition and culture. Tatiana Trouvé’s spectacular work The Shaman is certainly a feat of design with a deep indent the goes below the fair’s floor, the dribbling of constant makes the piece feel alive while the uprooted tree is made from bronze and the blankets from solid marble making it a totally artificial piece that initially appears organic our to be mimicking the natural. 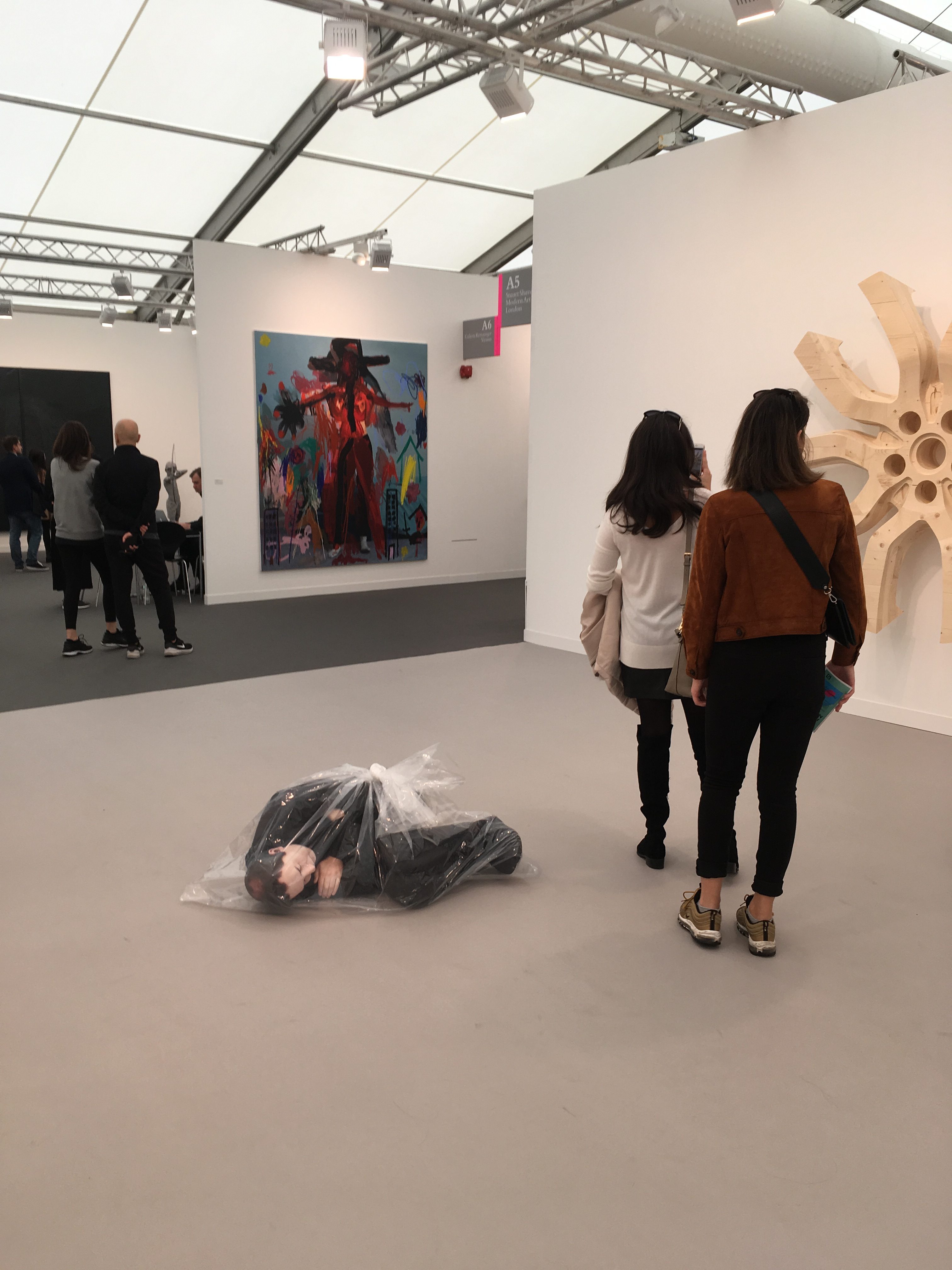 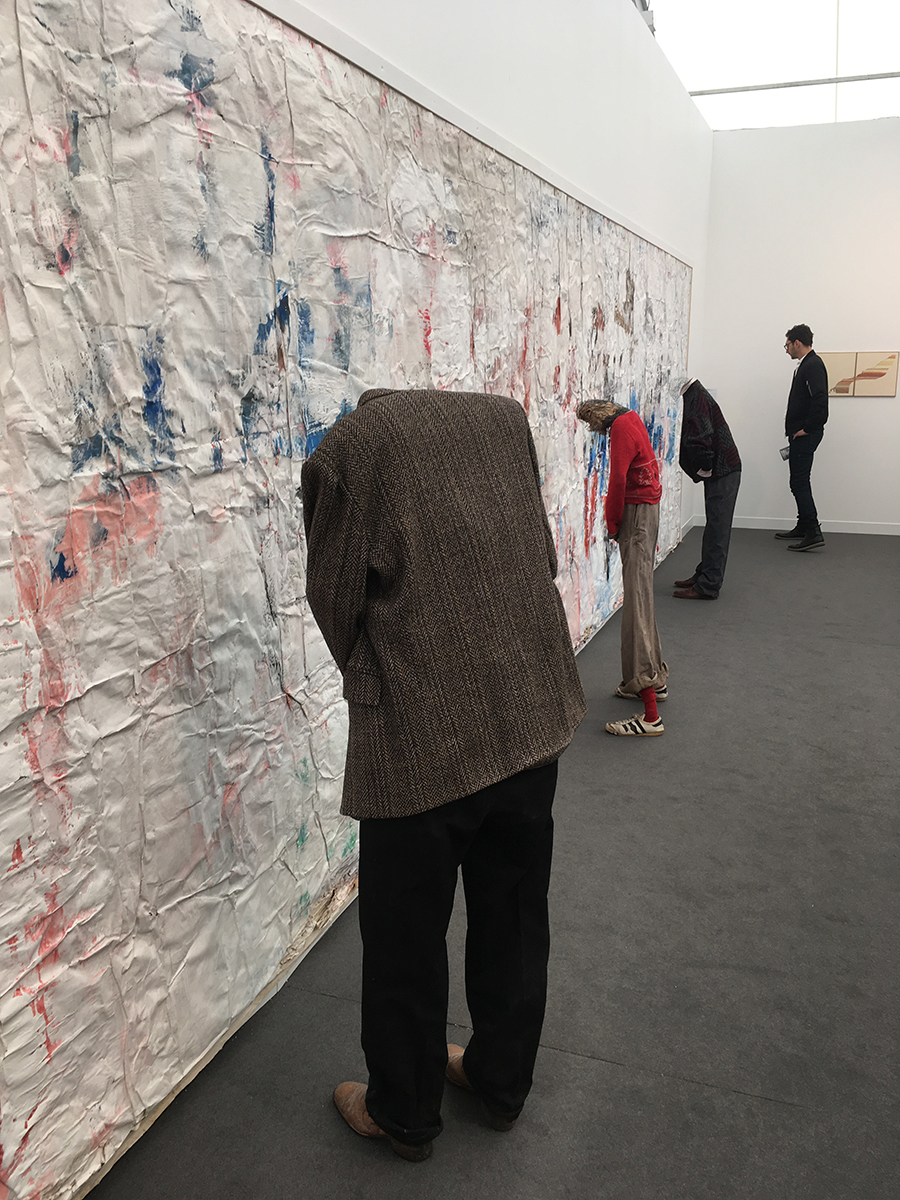 Blank Projects, South Africa, won this year’s Focus Award Prize for their stand which featured works by Bronwyn Katz, Donna Kukama and Cinga Samson. Cinga Samson is a self taught artist whop explores themes of youth, spirituality, blackness and depicts the landscape of South Africa. His self portraits incorporate contemporary clothing, complete with fake fashion logos against backgrounds that are created out of fantasies combined with real landscapes. 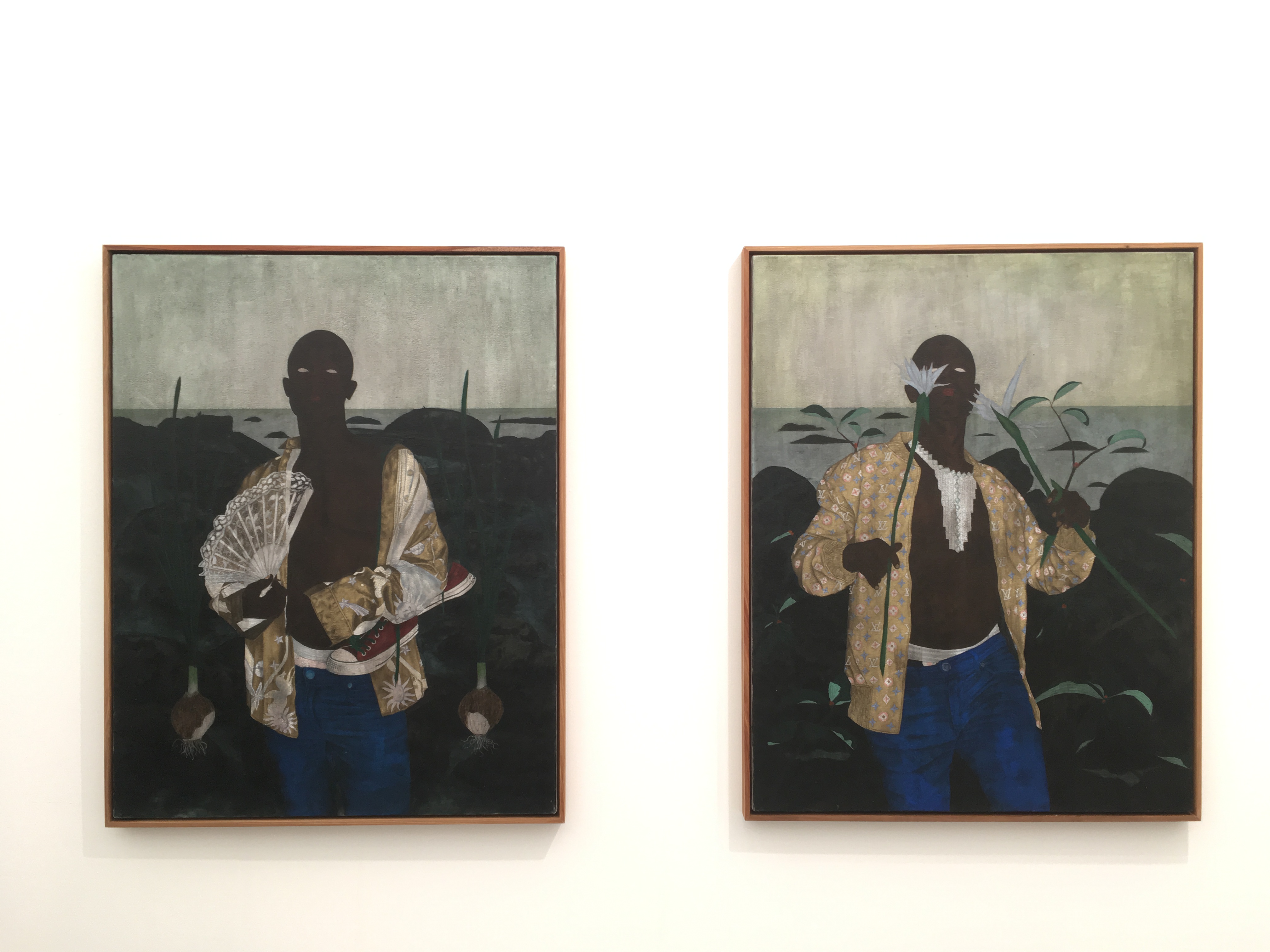 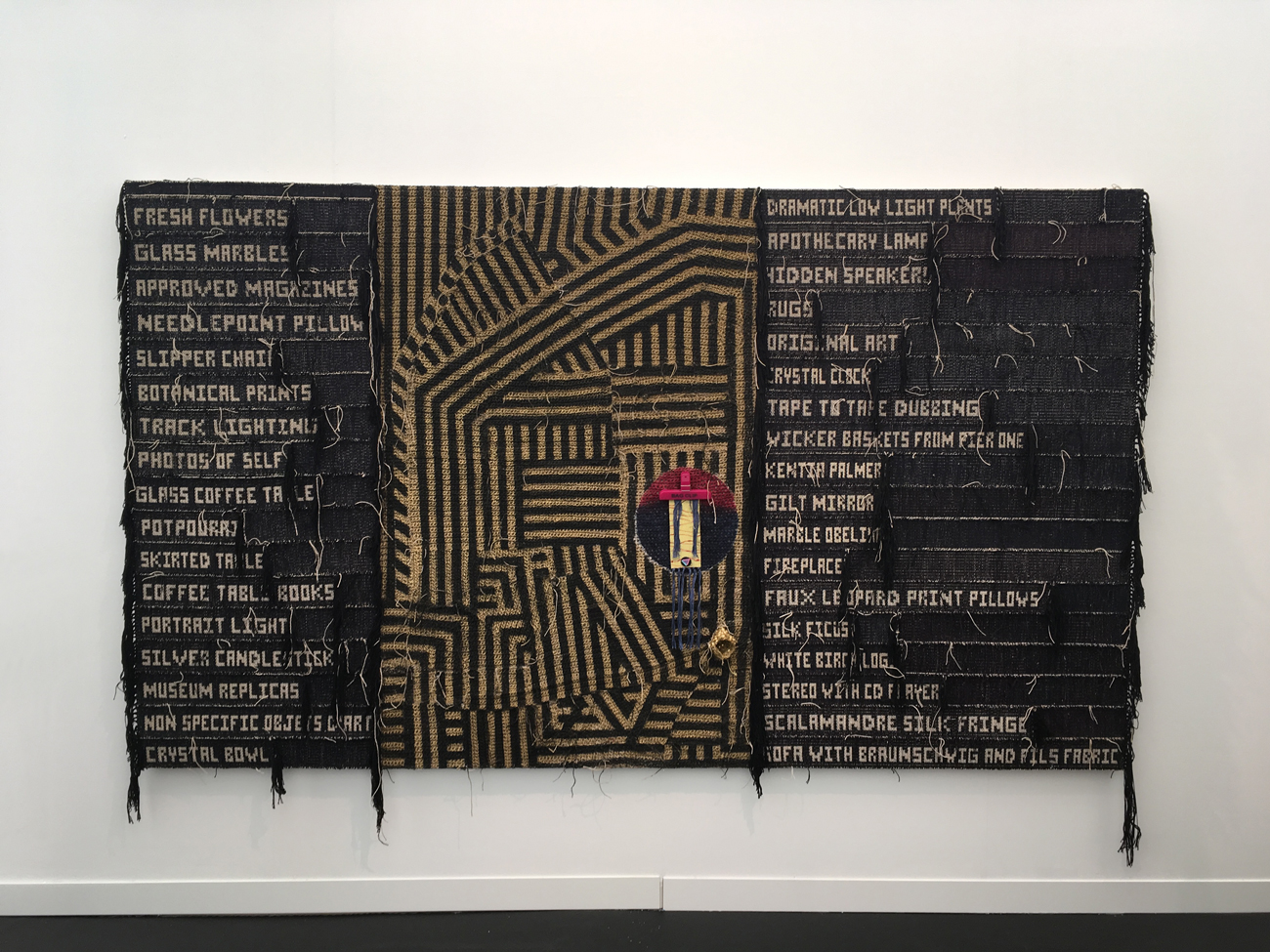 The use of fabric and textiles throughout the show was quite common but a few pieces stood out with their combination of abstract techniques alongside traditional wall hanging, loom weaves or banner like formats. In particular the work of San Francisco-based Josh Faught is worth a look. Focused on queer identities and lifestyles, the rough, messy, fractured wall based pieces have a strange joy about them. Athena Papadopoulos’s infirmary shows 7 strange beds that seem torn between nightmares and fantasies, flesh and softness and strange, medical elements. 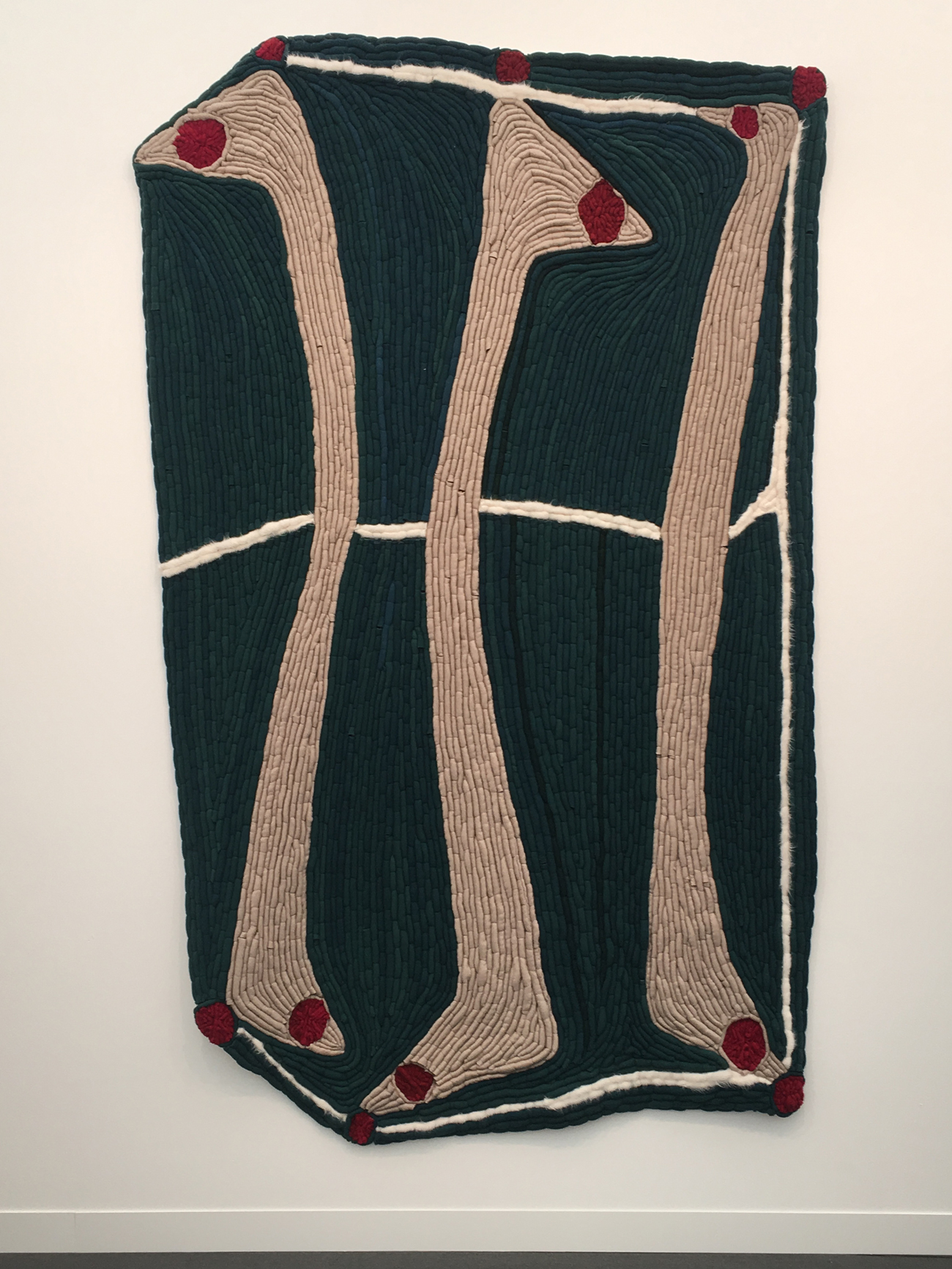 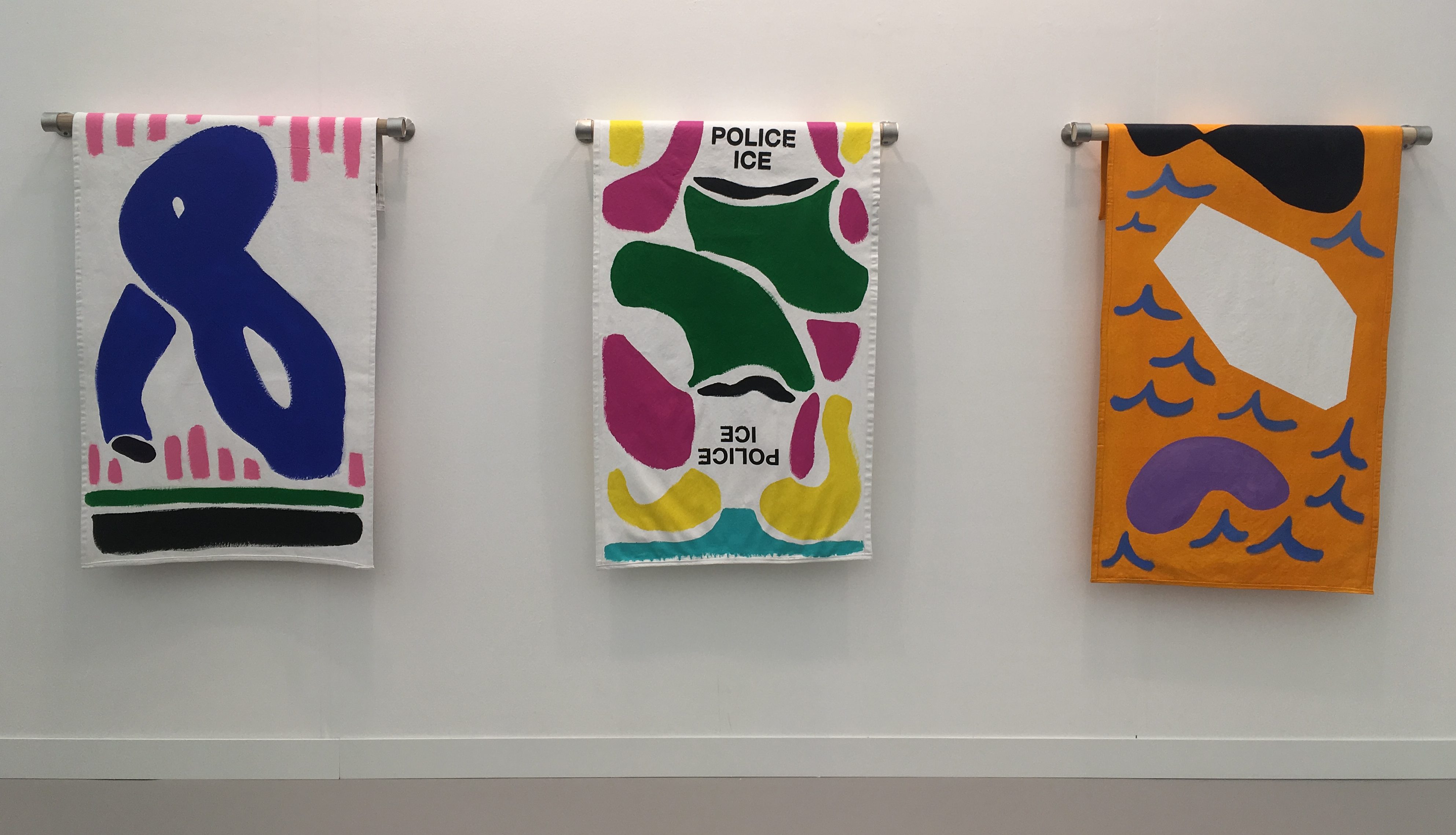 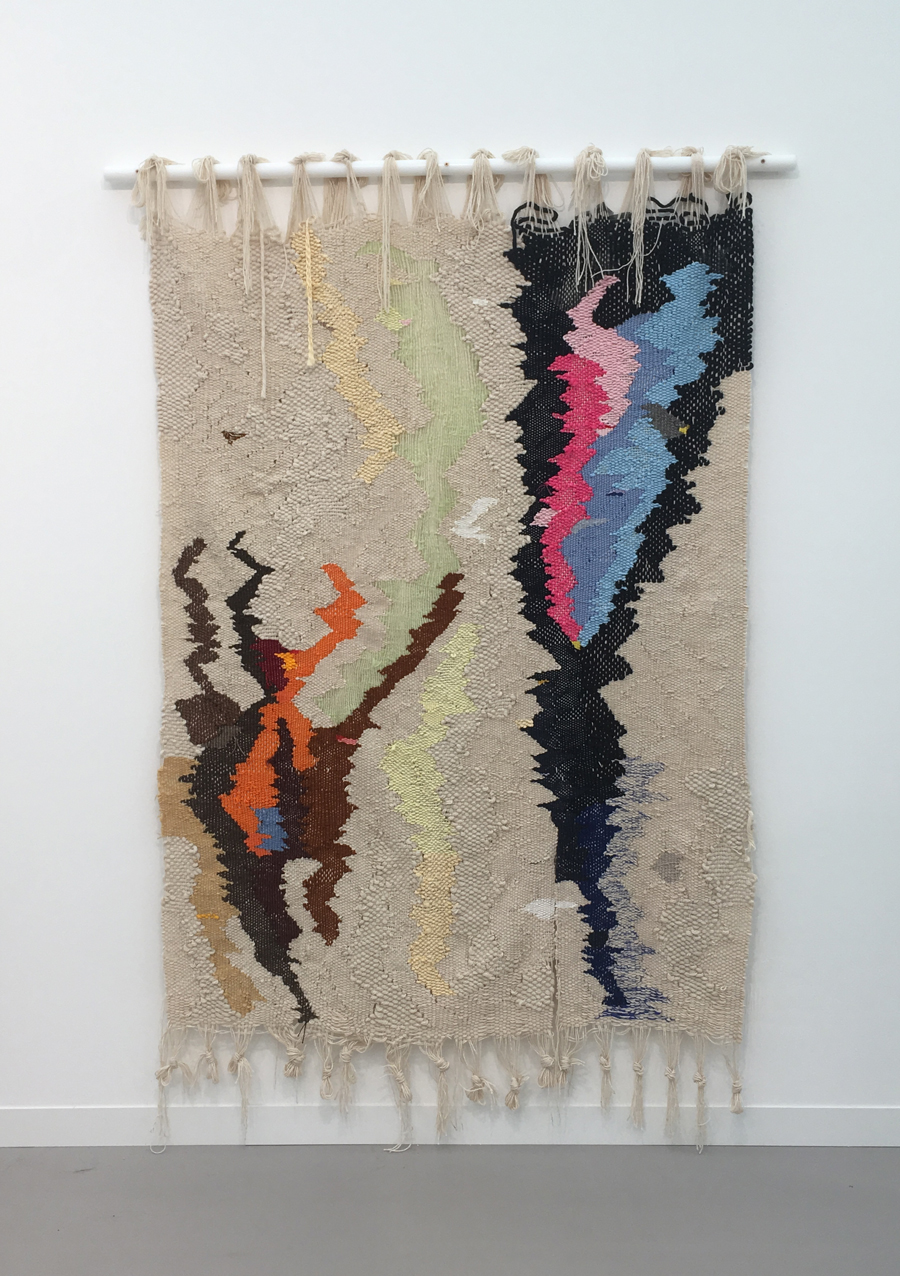 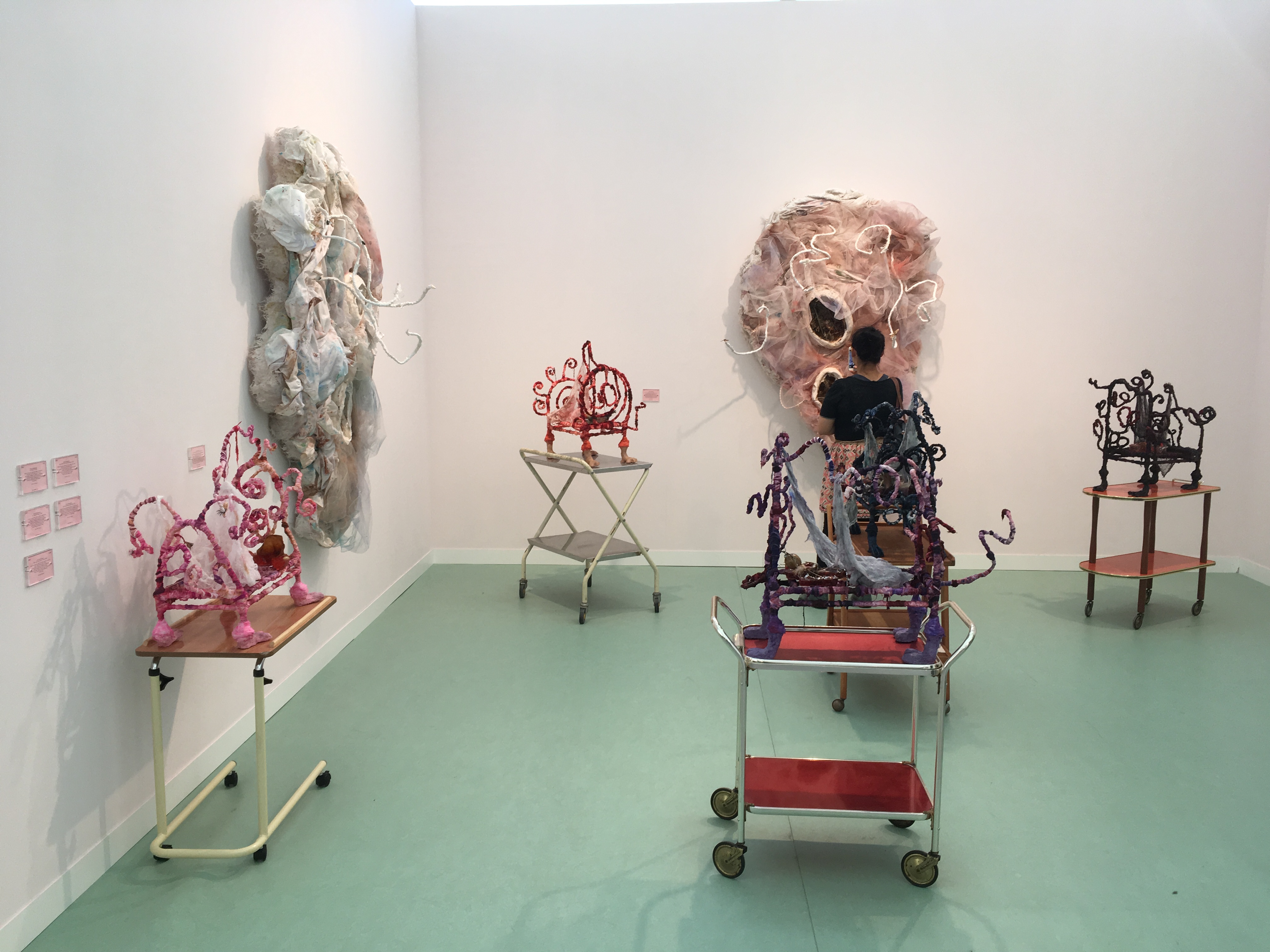