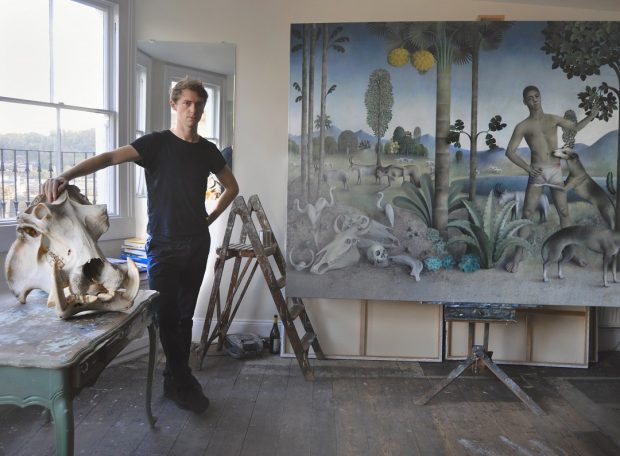 It’s hard to pin down James Mortimer’s thought provoking artworks. We interviewed the artist to find out more about his inspirations and working methods. Having graduated from Bath School of Art and Design in 2013, James has been painting and sculpting ever since. In this time he has developed his own distinct approach to art-making. This results in works that imply narrative and folklore, and could have been painted a hundred or more years ago. A new solo show of his work opens imminently at London’s James Freeman Gallery. 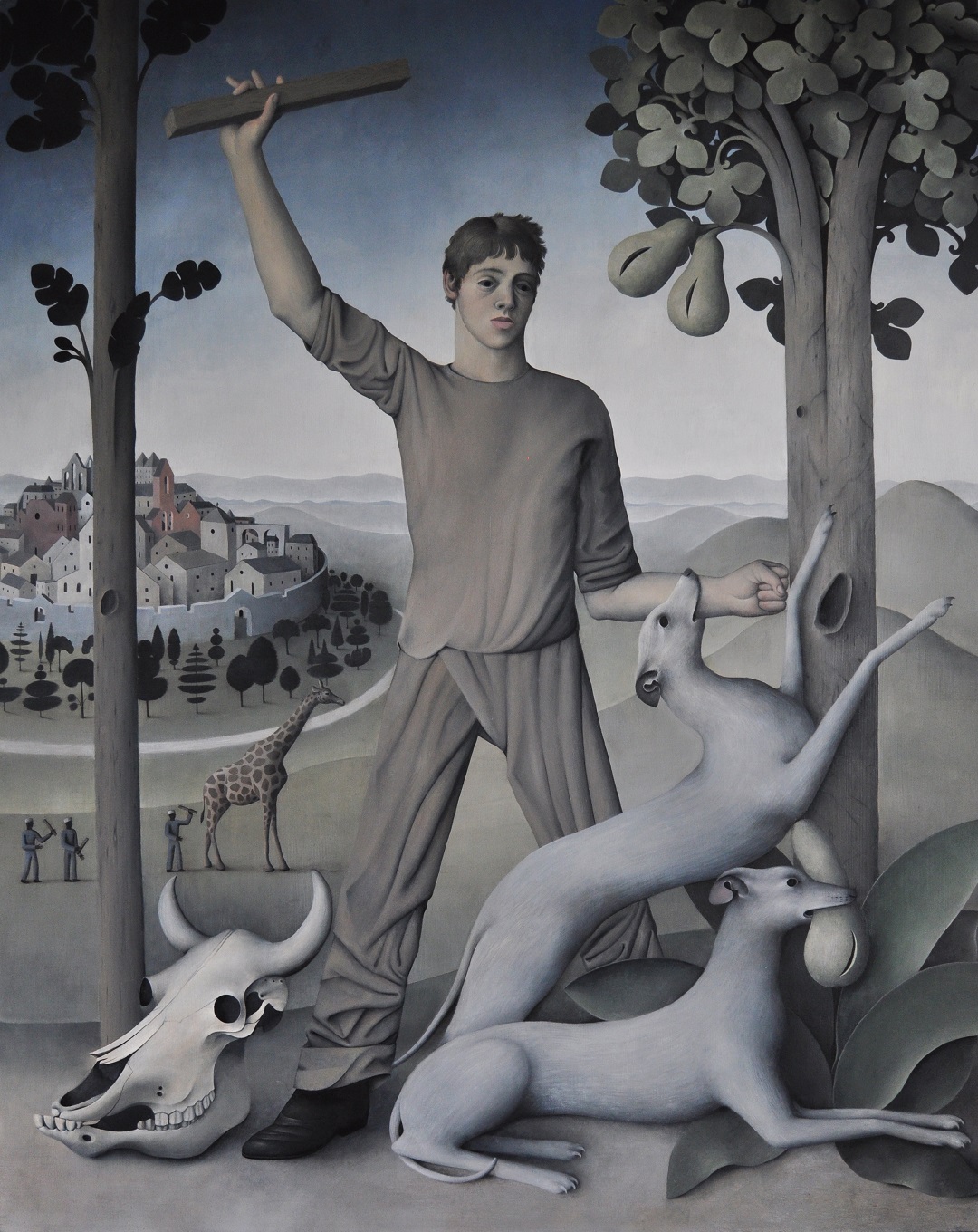 Lisa: Please can you tell us who you are and your artistic background?

James: I’m James Mortimer and I am known for my paintings, drawings and sculptures.
As for background – I did the typical art stuff at school, and studied sculpture at the Bath School of Art and Design. I graduated from that in 2013. I have been generally hacking away at the art since then.

Lisa: What inspired the transition from sculptor to painter? Do you now create work in both 2 and 3 dimensions or do you purely paint now?

James: I do both, but drawing is the cornerstone of sculpture and painting and what links them. For me that’s the most important thing. Sculpture’s definitely the harder one to get right though – I’ve only ever made a few that in my opinion particularly work, although I quite like bad sculpture.

But bad or not, the disciplines all inform one another and build up your visual sense. It’s a shame when a painter thinks they can’t model things, or a sculptor says they can’t draw. You wouldn’t have heard any of that from Picasso – he just knuckled down and got on with it. 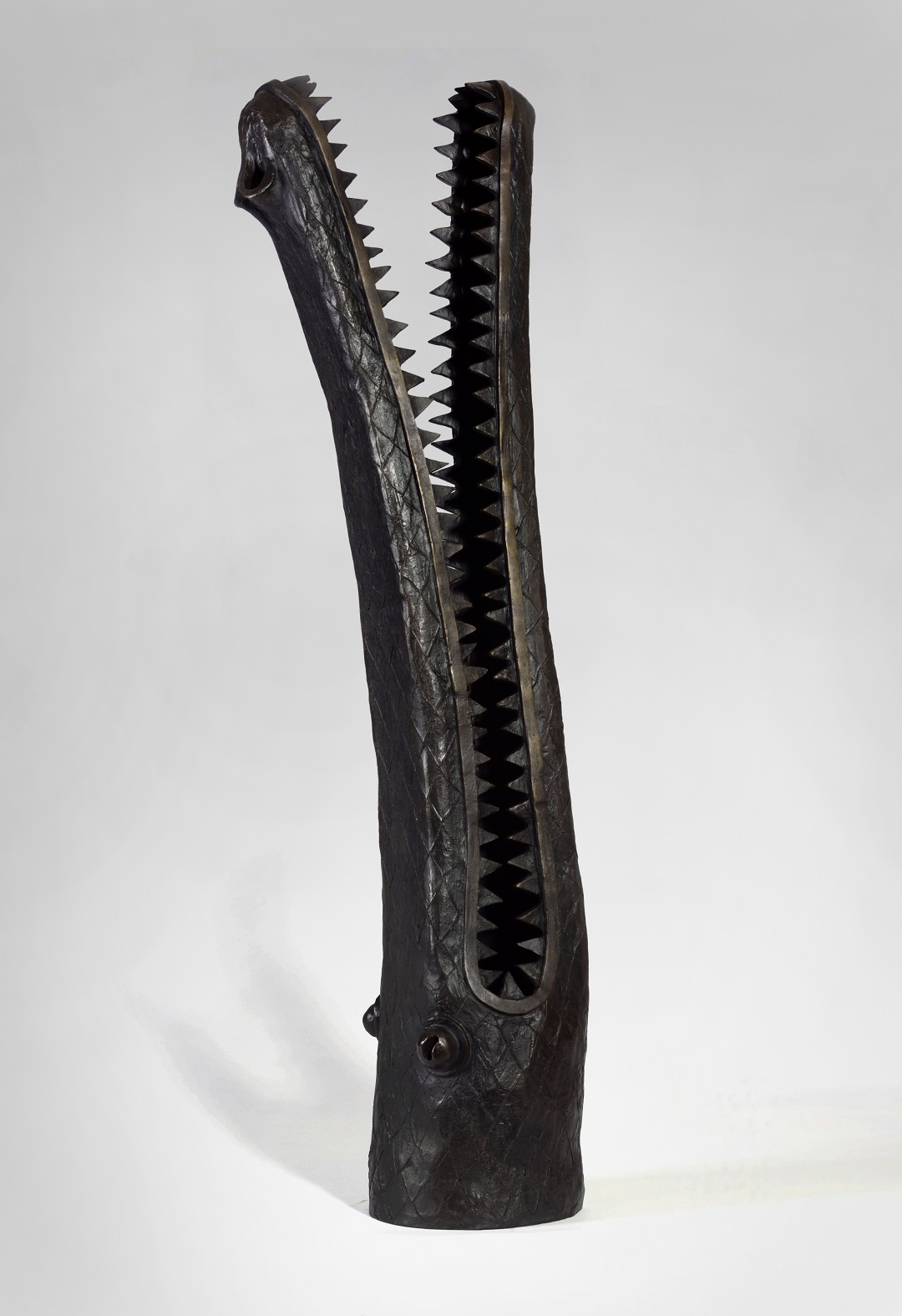 Lisa: How would you describe the relationship between your paintings and sculptures – are they all about the same thing or are the aims and intentions different?

James: They probably come from vaguely the same place, but obviously different ideas work best in different mediums. I had some art teacher once who told us to always ask ourselves – “why should this idea be as a painting? Would it be better as a sculpture? Or a photograph, or a film? Or all of them at once?” And, if it should be a painting, “Why a small one? Would it work better if it were 20ft tall? etc.”

I mean, you probably shouldn’t overthink these things and just go with your gut. But it’s good to have that in the back of your mind and make sure you always do justice to an idea. 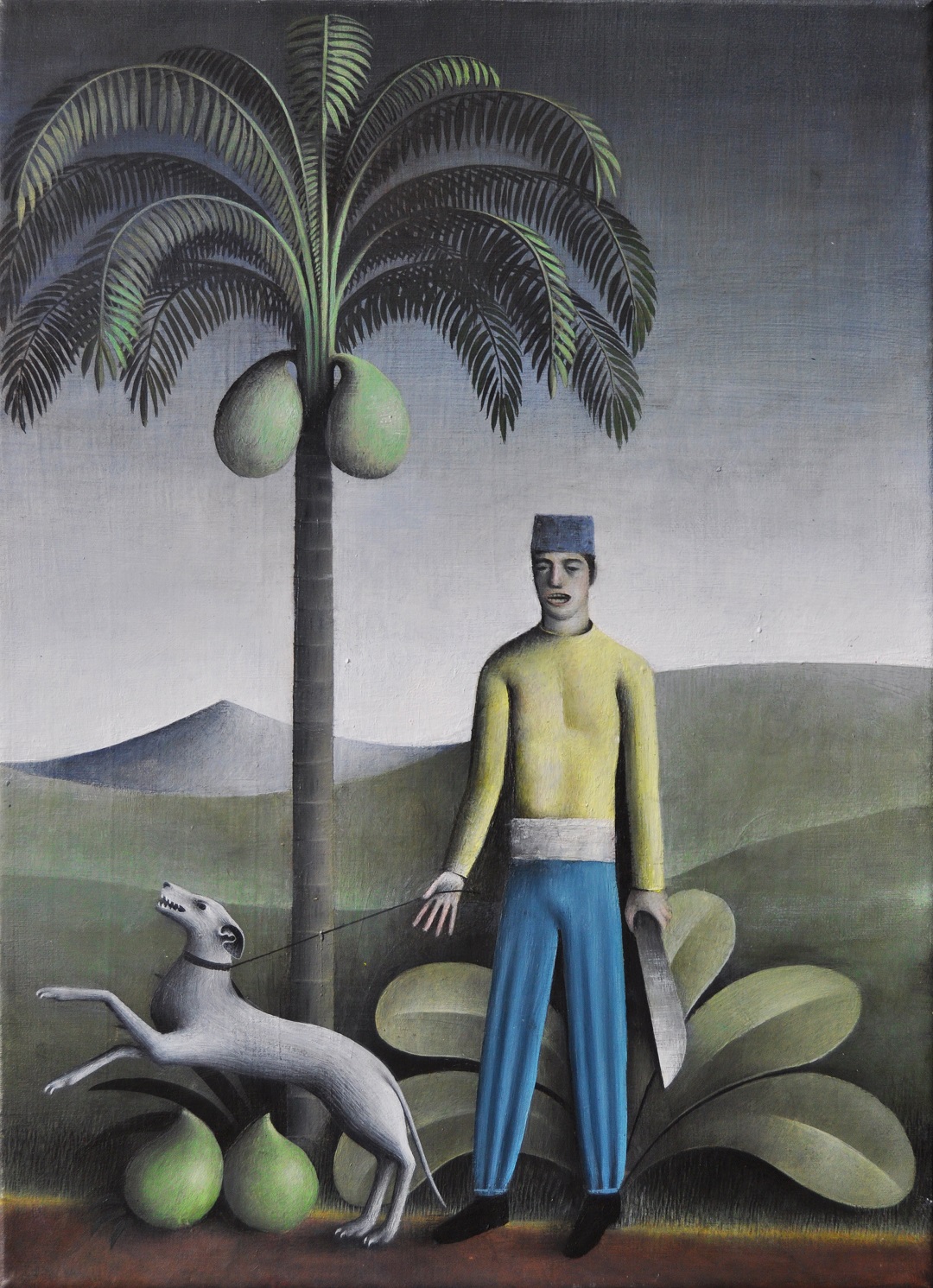 Coconut Man
James Mortimer
Oil on canvas, 10 in x 14 in

Lisa: Please can you tell us a bit about your forthcoming show, including your favourite work to be included?

James: The exhibition is called “Land of Mortimer” (quite self-explanatory) and is mostly paintings, with one large-scale drawing. I’ve been working on them over the last year and they’ve generally stemmed from whatever’s been going on in my life and mind while I’ve been doing them. I’ve ended up painting a lot of water, a lot of dead trees, and a lot of electric blue skies. There are lots of little figures running around – which is what I like.

My favourite piece in the show is a small painting called ‘Sheep Man’. I started it a couple of years ago and could never make it work. Eventually I finished it back in the summer during the heatwave, after a very nice trip to Cornwall. Suddenly it somehow all fell in to place. It’s ended up with a very Cornish air about it which I’m very much drawn to.

My other favourite thing in the show (but which I didn’t make) is the real life skull of a hippopotamus. I obsessively collect curiosities and this one normally sits on the landing outside my studio. It’s very a large and beautiful object and crops up in some of the paintings. I considered it important to include as a memento mori for those who attend the gallery. 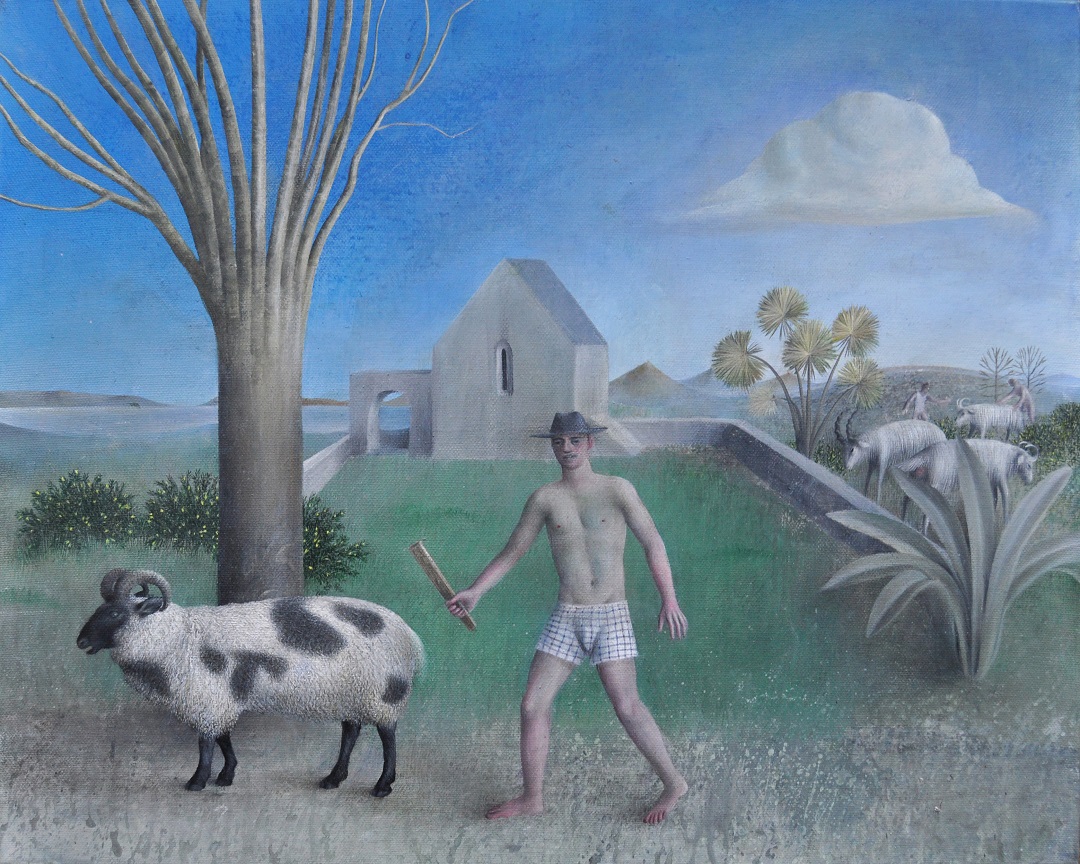 Sheep Man
James Mortimer
Oil on Canvas, 20in x 16in

Lisa: Can you describe the picture making process for you – namely, how you go about developing composition? Does the composition evolve as you paint or is it finalised before you apply paint to canvas?

James: The very first thing is when the image comes in to your head, usually from nowhere, and then you sketch that down immediately. I’m interested in golden rations and the mathematics of composition etc, but they say the first thought is usually the best thought. Therefore I try to stick as close to the original sketches as possible. You can find yourself hacking away trying to force something to work and losing your mind. In the end you just go back to however you had it in the first draft. When that happens it’s most annoying! 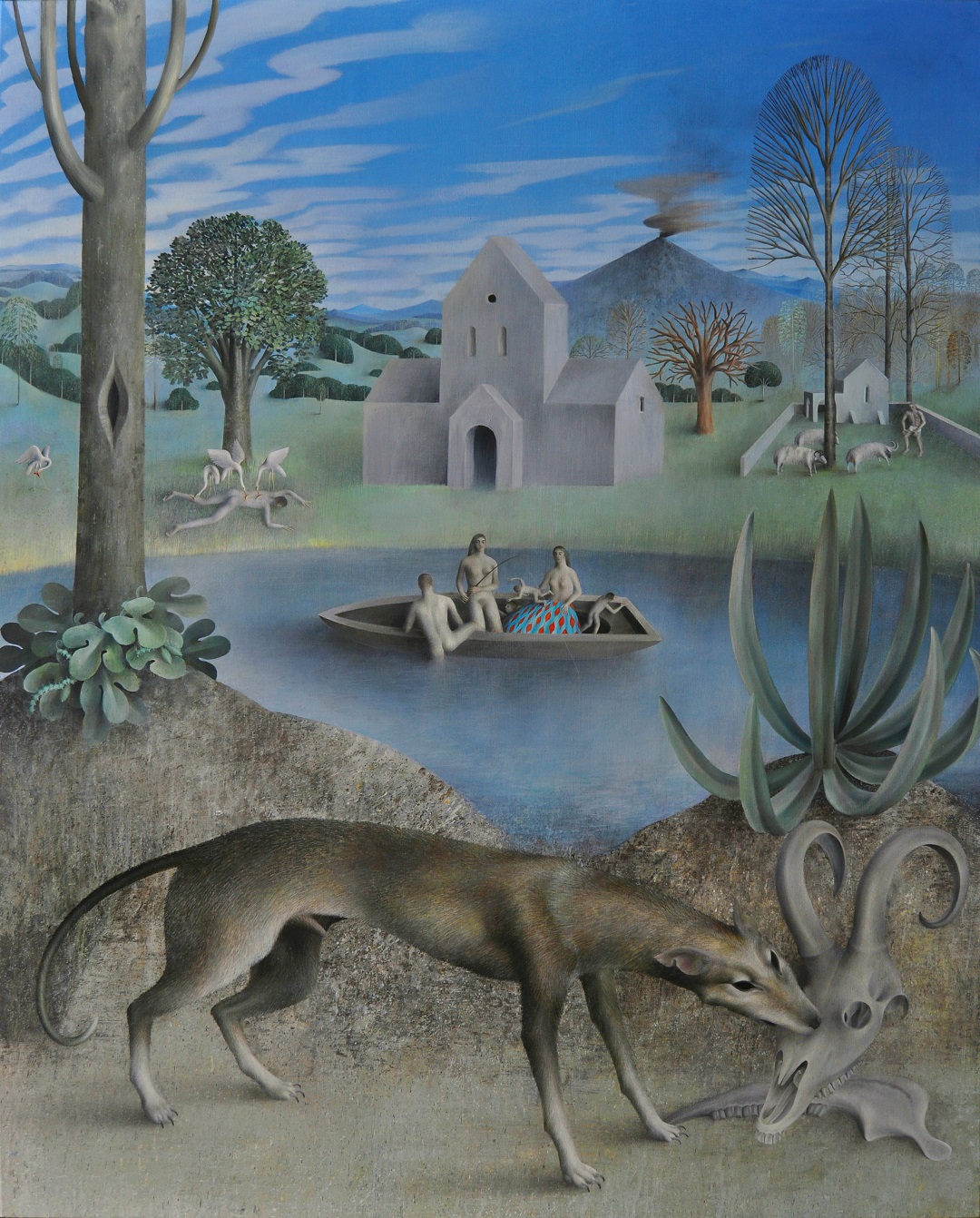 Lisa: What is your painting surface and paints of choice and why?

James: As a self-taught charlatan I’ve always been fairly relaxed about these things, but generally I like a nice smooth canvas with plenty of layers of gesso on it. As for paints I use quick-drying oils (I refuse to wait six months for something dry). I also use watercolours and gouache for washes of colour. Once you varnish them they are secured to the oils perfectly fine. I always keep an eye out for new things though – recently I did a painting featuring some rocks covered in bird poo. I realised nothing would work better than the mess the pigeons had left outside my windowsill (applied with a palette knife and sealed with varnish). You can’t improve on nature. 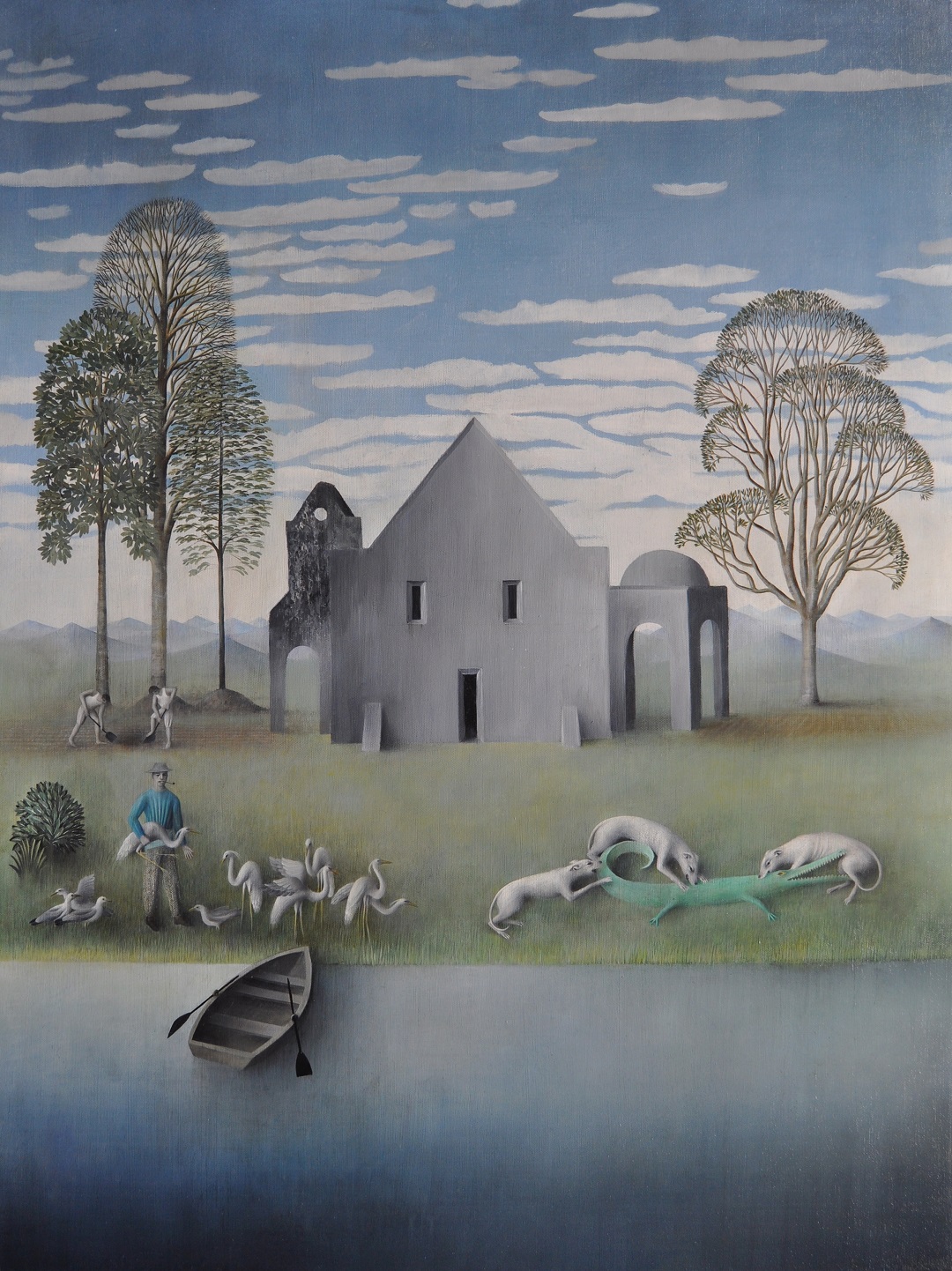 House on River
James Mortimer
Oil on Canvas, 30in x 40in

Lisa: The paintings have a very timeless, atavistic quality to them, I think brought about by the textures seen on the paint surface. How do you create these very chalky, fresco like effects in your work?

James: Well a lot of the time I’m going for a fairly sculptural quality with the heavy shadows. I like it when a painting looks like it’s been carved out of stone. I also use millions of washes of colour when doing things like skin or the bark of a tree. Sometimes it goes wrong but generally I like the patina you end up with.

I think a piece of art should always stand up to close inspection. One of the biggest thorns in my side is when you have an otherwise decent picture and it only gets worse the nearer you stand. All pencil marks and flimsy brushwork. It should be like the surface of a pebble or a piece of wood, drawing you in and revealing more the closer you get. Just look at any of the greats -Jan Van Eyck to Cezanne to Rothko. The brushstrokes all have that strength. Whether you’re looking at them across a room or with your nose pressed flat up against them, they can always take it. 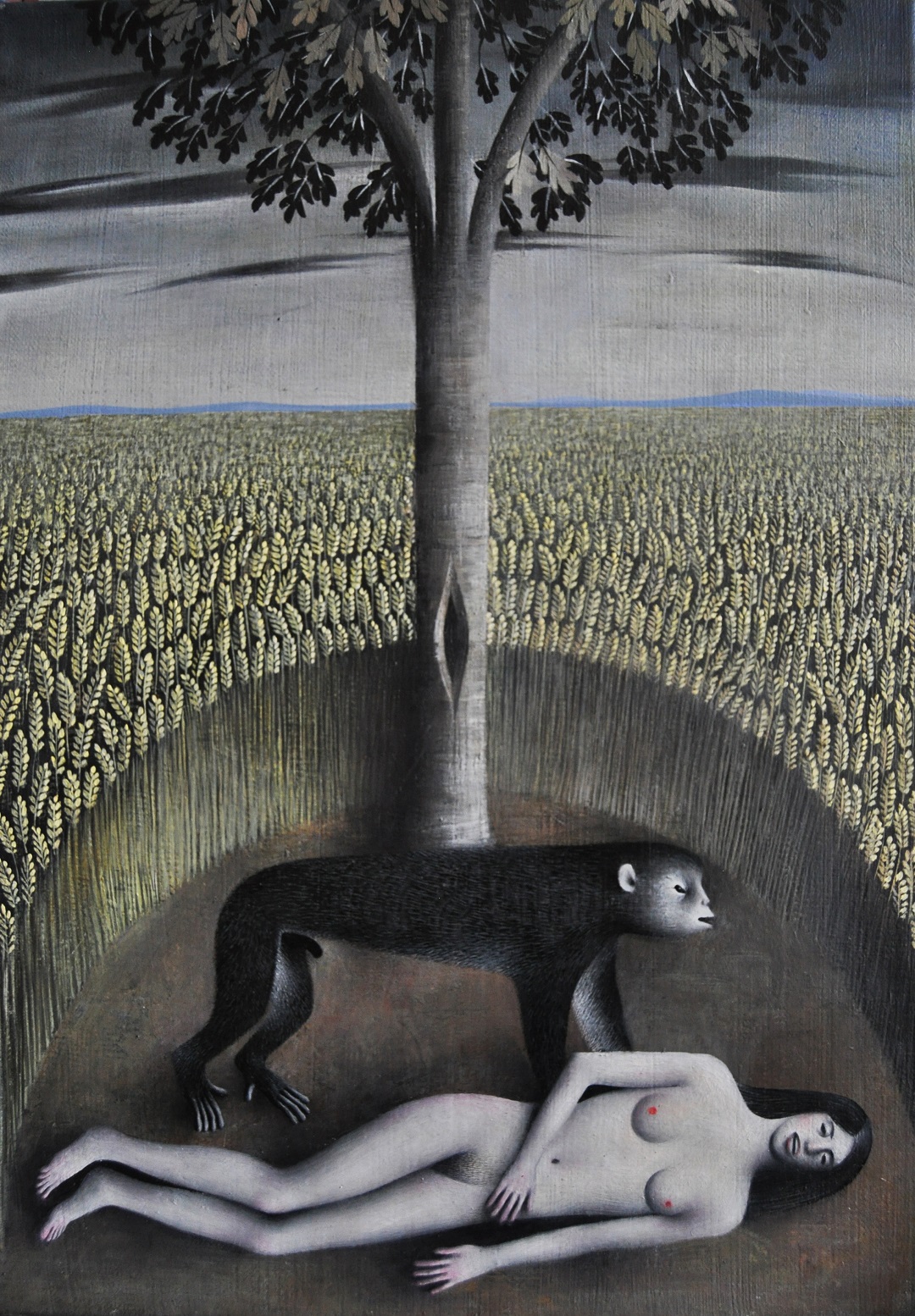 Wheat Field
James Mortimer
Oil on Canvas, 10in x 14in

Lisa: Can you describe your favourite place to make your work?

James: Most of it’s done in the studio, but for me the really creative part is done in the sketchbook, which I take everywhere. My favourite place with that is on a train, next to the window, in the quiet carriage. 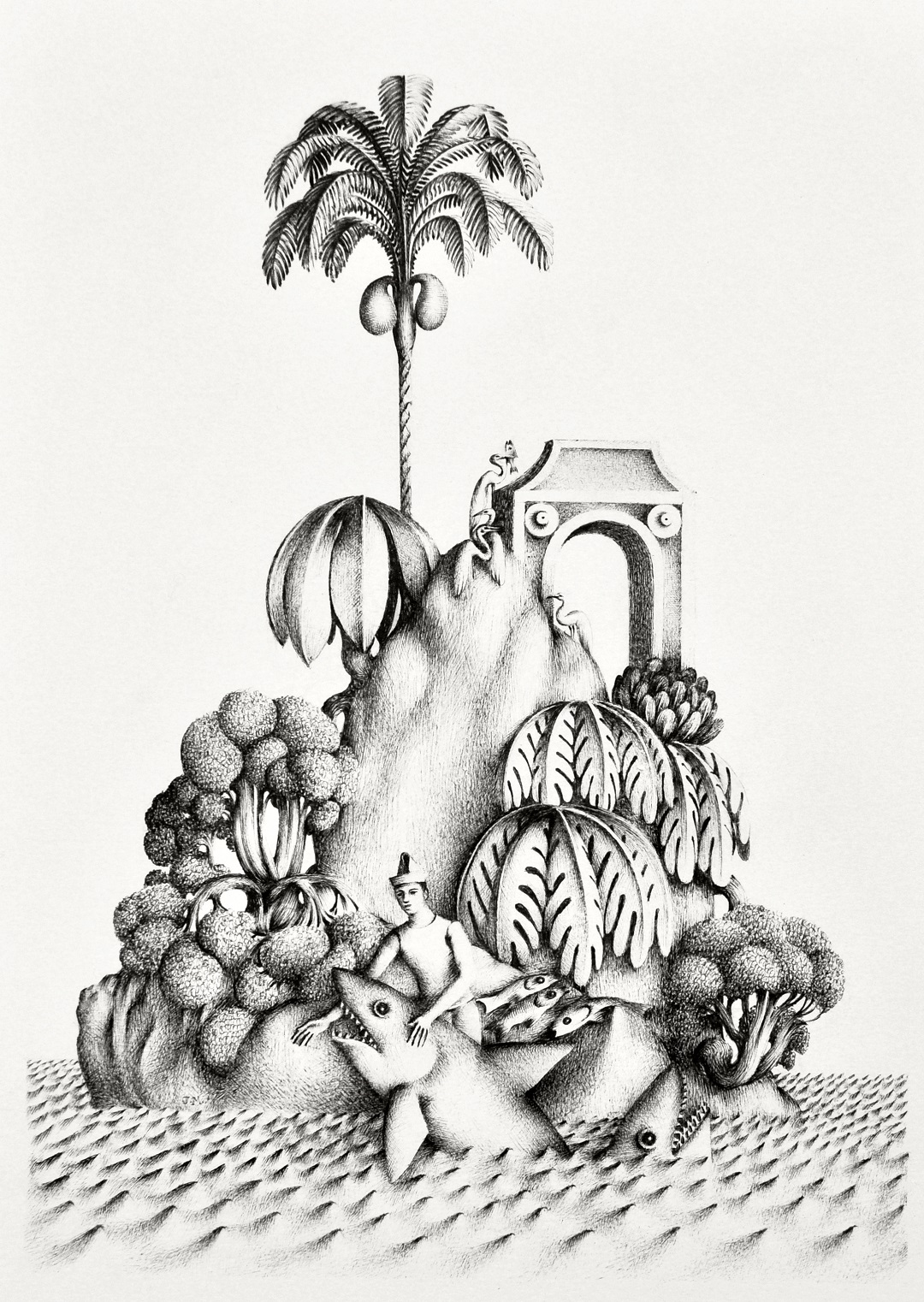 Man and Shark
James Mortimer
Drawing on A4 Paper

James: I’m feverishly working on the final stages of the pieces for this show – there’s around nine of various sizes and at this stage I have them set up like Stone Henge while I work on them simultaneously. They’re all fairly different from one another, but have a certain overarching tone. Probably due to the stressful way I work on them all at once.

James: In the flesh, ‘Land of Mortimer’ is on from the 7th February at the James Freeman Gallery in Islington, London.

And my website (which is updated infrequently) is – www.jamesmortimerart.com 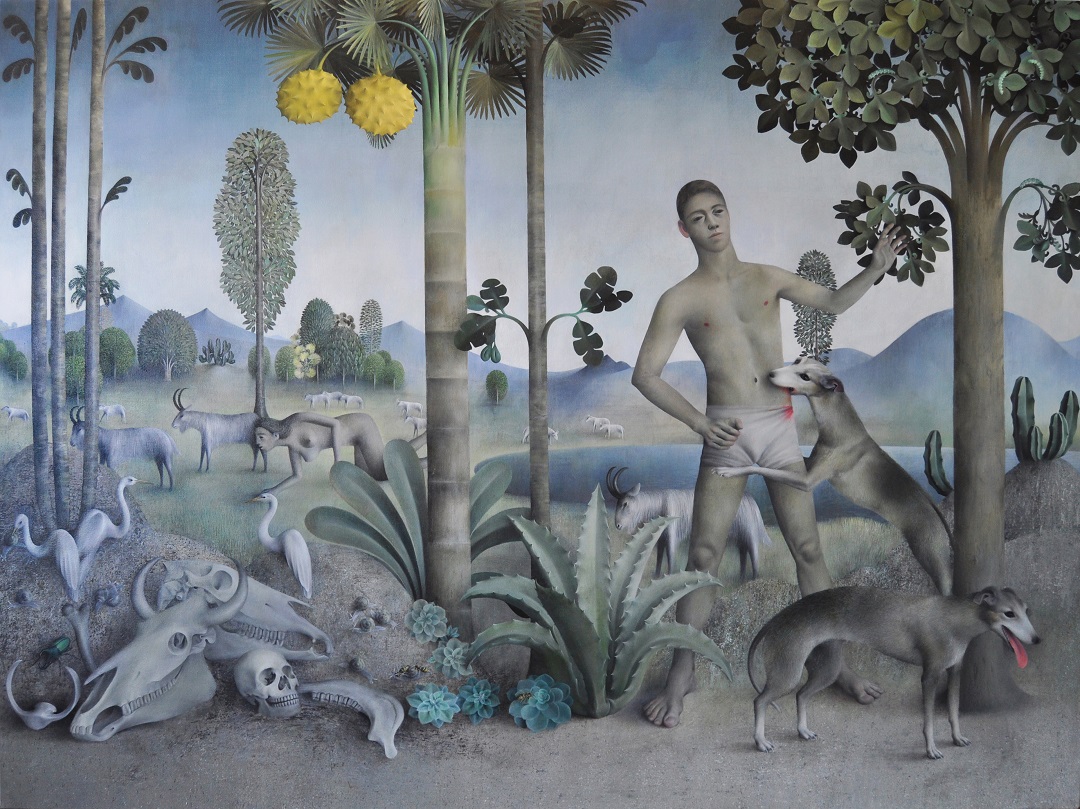